Amandine Henry is a French international player who has been in the world of football since 2004. She is a veteran player who is 33 years old at the moment and who has been very useful for the teams she played at and especially at Olympique Lyonnais where she put on the best of her performances and was at her peak.

She started her career at Hénin-Beaumont for one season before moving to CNFE Clairefontaine and then to Lyon for a long spell from 2007 until 2016, the year in which she moved to the NWSL and the Portland Thorns. Henry came back from her American dream after a year, joining PSG on loan for one season prior to getting back to her home, Lyon, from 2018 until the present. She is more likely to finish her career at Lyon since she has already been one of their legends, having won almost everything with them, including 13 Division 1 Féminine titles, seven Coupe de France feminine, and more importantly, seven UEFA Women’s Champions League titles.

Henry’s achievements and performances were overlooked at the French national team mainly by Corinne Diacre who apparently had an issue with Henry and excluded her from participating with the team starting from Euro 2022 during which Henry was not included in the list. Therefore, the question that we will try to answer in this article is: Will France lose Henry in the upcoming tournaments?

This tactical analysis scout report will try to answer this question by assessing Henry’s footballing abilities, her skills as a midfielder and what differentiates her from other midfielders, without forgetting to explore her roles and position at Lyon and how she fits their tactics.

Henry’s main and natural position is defensive midfield. She usually plays as the team’s defensive midfielder just in front of the defence according to the 4-3-3 formation. And at times she also plays as a right or a left defensive midfielder, making a midfield duo with Lindsey Horan in a 4-2-3-1 formation. This position suits Henry’s characteristics very well since she has the physical abilities needed to absorb the opposing high pressing and contribute heavily in the build-up phase.

Moreover, her excellent passing skills and accuracy allow her to play the role of a deep-lying playmaker perfectly, providing key passes regularly and contributing in the attacking phase so often, either with progressive and key passes or with shots from distance as well. The following pizza map highlights Henry’s unique passing abilities and confirms what we have just mentioned regarding her role as a creative midfielder who pulls the strings while not advancing too often and playing in front of the defence. 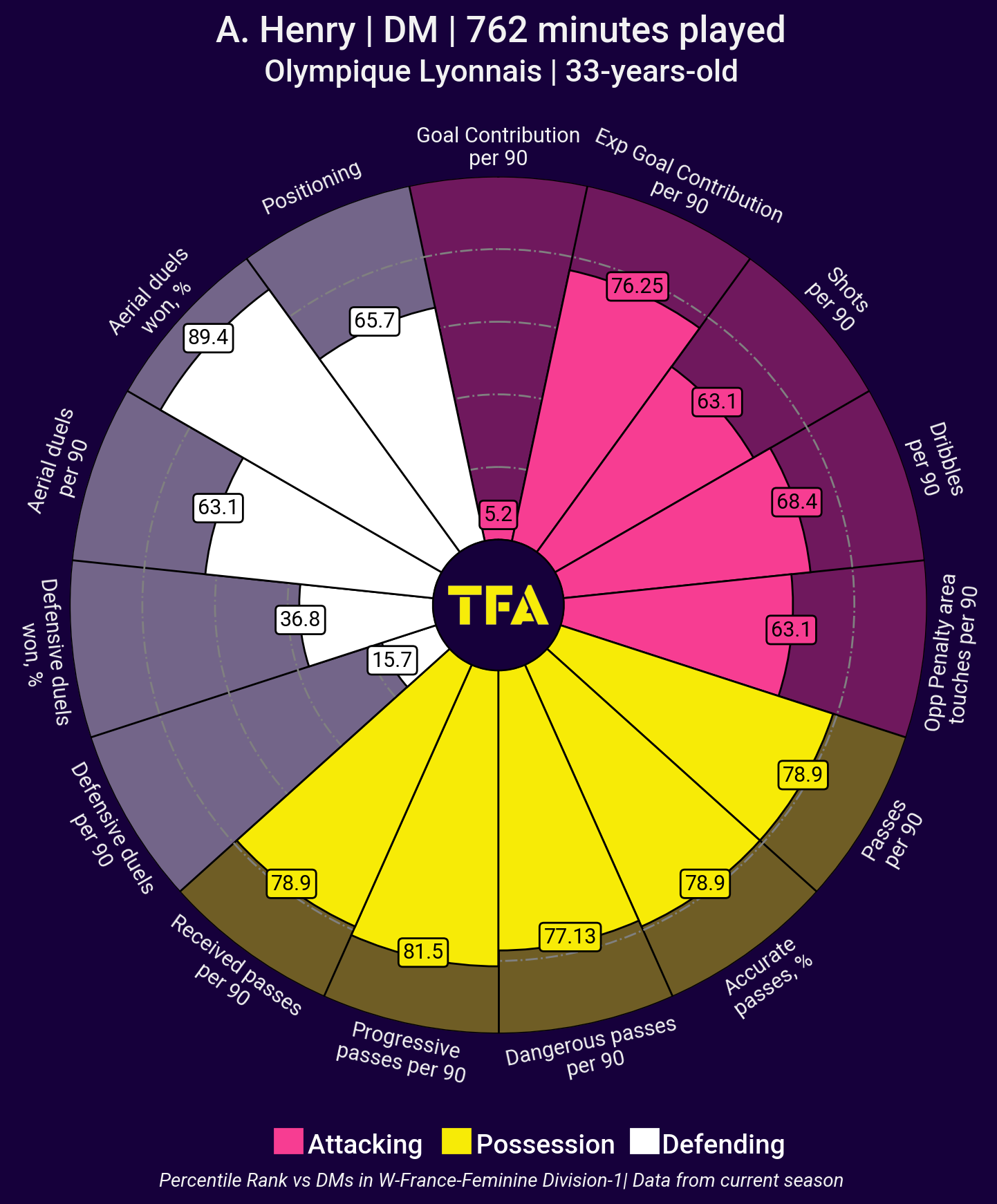 At the same time, Henry can be physical enough and win in duels and especially in aerial duels. It is true that in the map Henry’s goal contribution stats do not match her expected goal contribution, yet that doesn’t mean that she doesn’t provide key passes regularly. In addition to these abilities, what characterises Henry and differentiates her from other defensive midfielders is her outstanding shooting abilities, and perhaps what showcased this shooting efficiency to the world of women’s football is her historic goal from distance against Barcelona during the 2021/2022 UEFA Women’s Champions League final.

In terms of playmaking, Henry can be considered one of the best in Europe in this regard since she is an excellent passer. Her passing accuracy equals 84% and 71.4% in terms of passes towards the final third, which is an excellent statistic. She is experienced enough to avoid pressing and deal with it without getting confused in midfield. She often plays in a simple way and doesn’t overcomplicate things because she knows that she plays in a delicate area in which errors cost too much. That’s why we see her playing with one or two touches when she is under pressure but without giving wrong passes.

What helps Henry find solutions even in complicated situations is the fact that she can be very accurate when using her left foot as well. She uses it a lot to serve her teammates either with simple passes or with crosses, and that helps her a lot in getting away from marking. The following example highlights Henry’s intelligent use of her left foot in complicated situations, knowing that in this particular action, she was about to cross the ball to her teammate who was advancing on the left wing and preferred to use the left foot because, if she did so with the right one, her direct marker could have had more chances to intercept the ball and Henry would have been unable to protect it with her body. 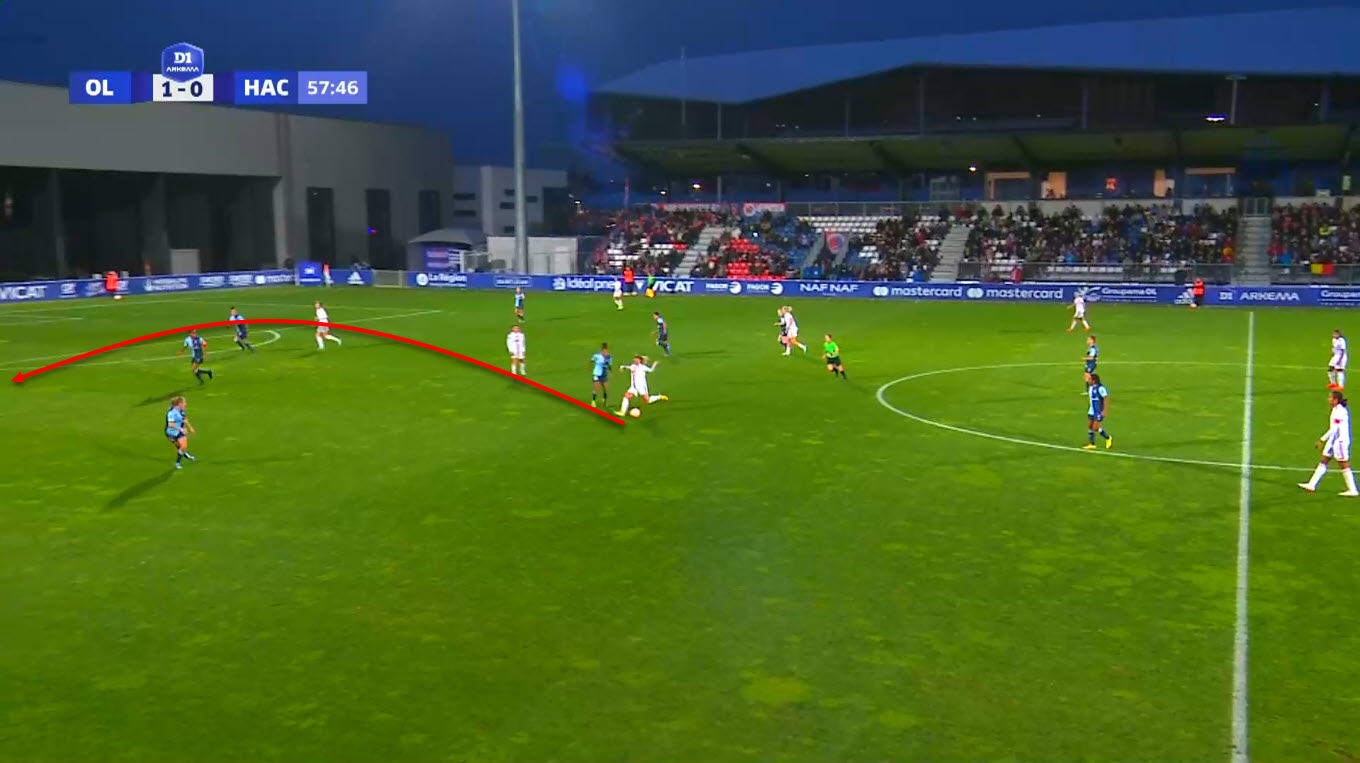 Henry also uses her head in an excellent way since she has already provided assists with headers from different situations. Apart from the fact that she scores goals with headers so often, she is also able to direct the ball to wherever she wants and doesn’t find problems when using her head to pass the ball, unlike many other players.

The following assist shows exactly how comfortable Henry is when using headers. In this situation, numerous players would have opted for a chest control and then a pass since that would have been easier and more sure, especially when knowing that there was not enough time to think and scan the pitch. However, Henry opted for accuracy and quickness since she preferred to pass with a header in order to gain some precious seconds, despite the fact that the ball came quickly towards her from a defensive clearance, leaving her no time for doing anything but a quick decision. If she did not react in that creative way, this opportunity would have more likely been more complicated for Ada Hegerberg, the receiver of the pass. 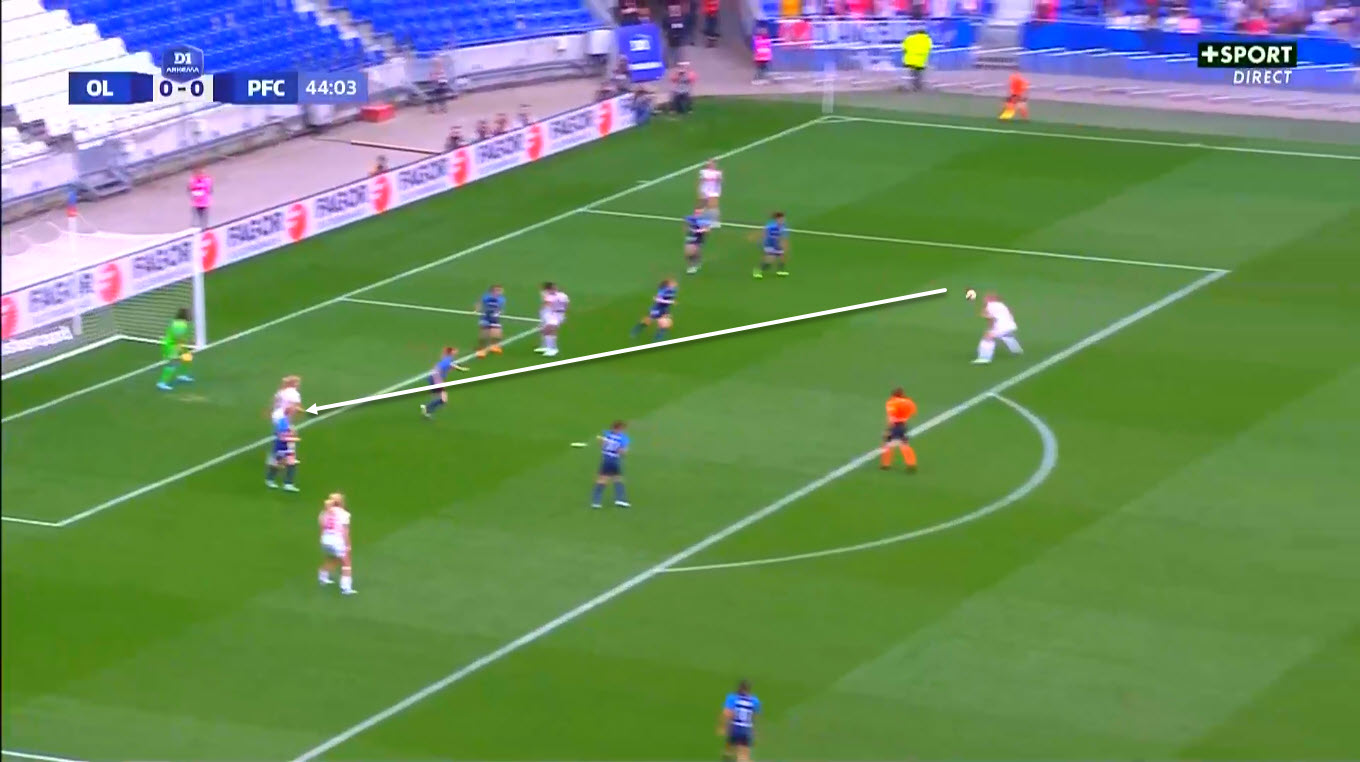 Henry’s long passes are usually accurate and her ability to break defensive lines has always been beneficial for Lyon and previously for France. Henry relies on crosses at the back of the defensive line so often and always incites her teammates to move without the ball in order to provide them key passes.

The next picture clearly shows how lethal can Henry be when having the ball in midfield and when having teammates asking for the ball while moving on both wings. She can always find the most adequate way to serve her teammates well and put them in a suitable goalscoring position while breaking the opposing defensive line. As soon as she saw Amel Majri running and asking for the ball, she gave her a precious through pass between four defenders, making the ball meet Majri at the edge of the box and creating a one-on-one situation with the goalkeeper with just one key pass. 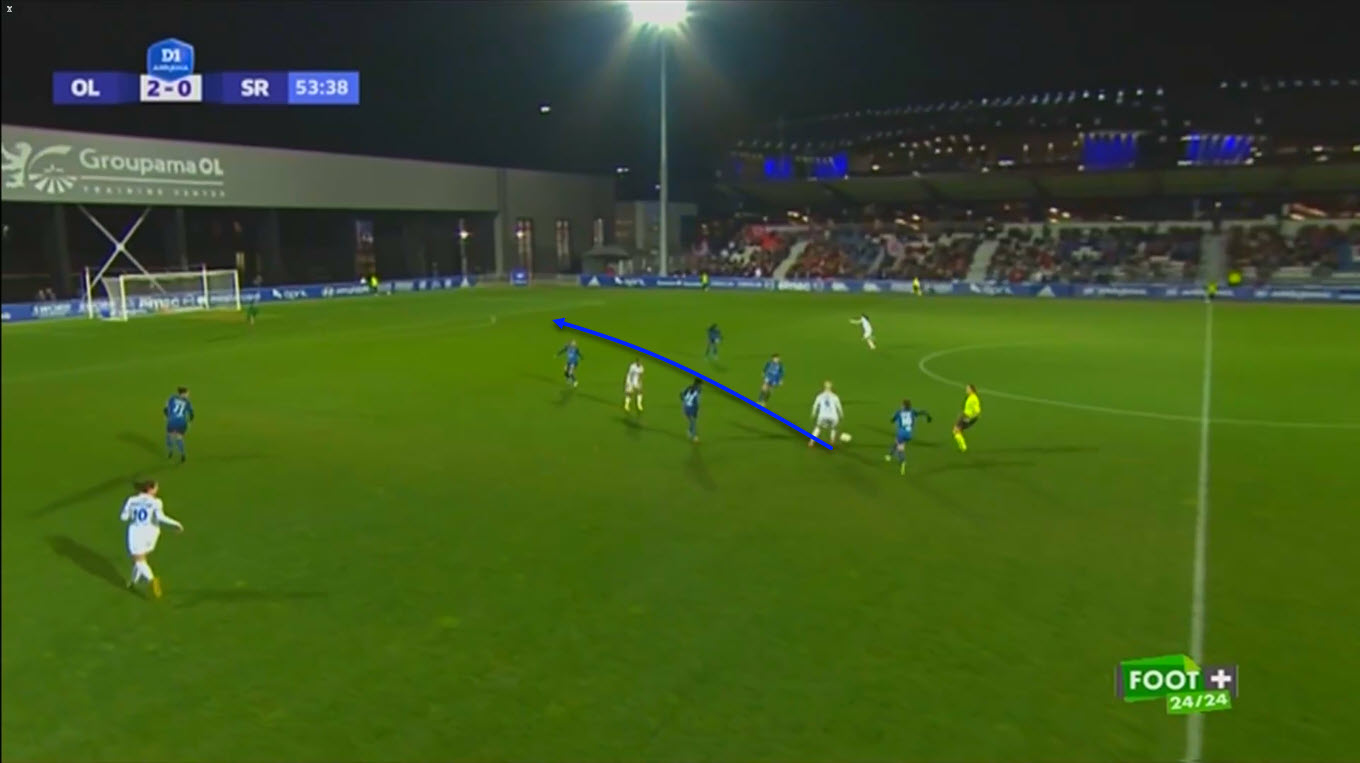 Regarding scoring goals, Henry uses her head a lot in passing as we said above, and she also uses it heavily in scoring goals mainly from set pieces or when she advances towards the box to meet crosses from both wings. Her header techniques are various and more importantly, she always knows how to orient the ball towards the direction she wants and with the power she desires, which helps her score goals so often with headers and have an advantage over other goalkeepers. This quality is quite rare in women’s football and not all players can master “the art of headers”, but Henry proved that she can. 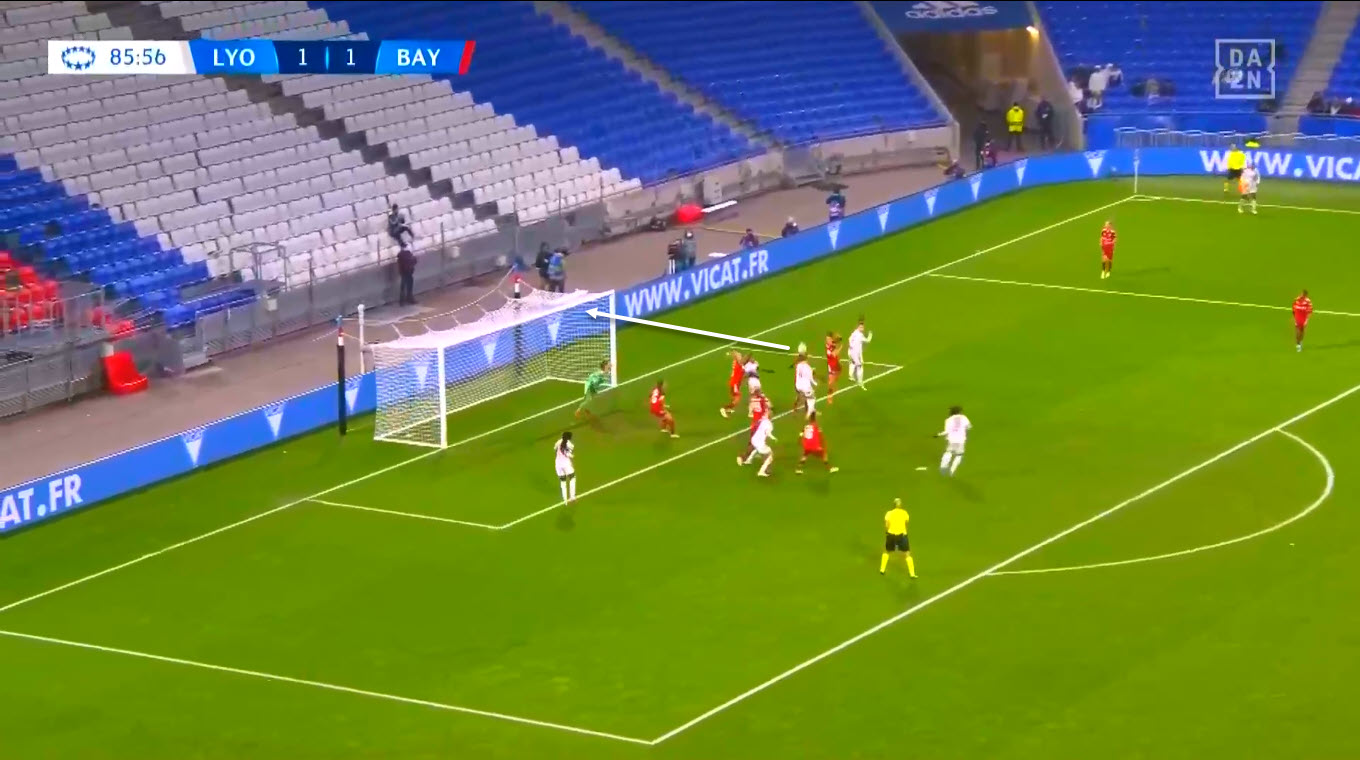 Another aspect that is rare to find in women’s football, and even in men’s football these days, is shooting from distance. Players nowadays tend to avoid trying to shoot from distance either due to a lack of confidence in their abilities or simply because of the head coach’s instructions.

Henry has never feared attempting to shoot from distance and she is among the rare players who shoot a lot from outside the box. Having the necessary power and accuracy to do so, Henry has been able to score numerous goals in this way and here is one of them. This goal was scored during a World Cup 2019 match against South Korea and it highlights Henry’s efficiency in terms of goalscoring and in terms of the solutions that she can propose in attack despite being a defensive midfielder. 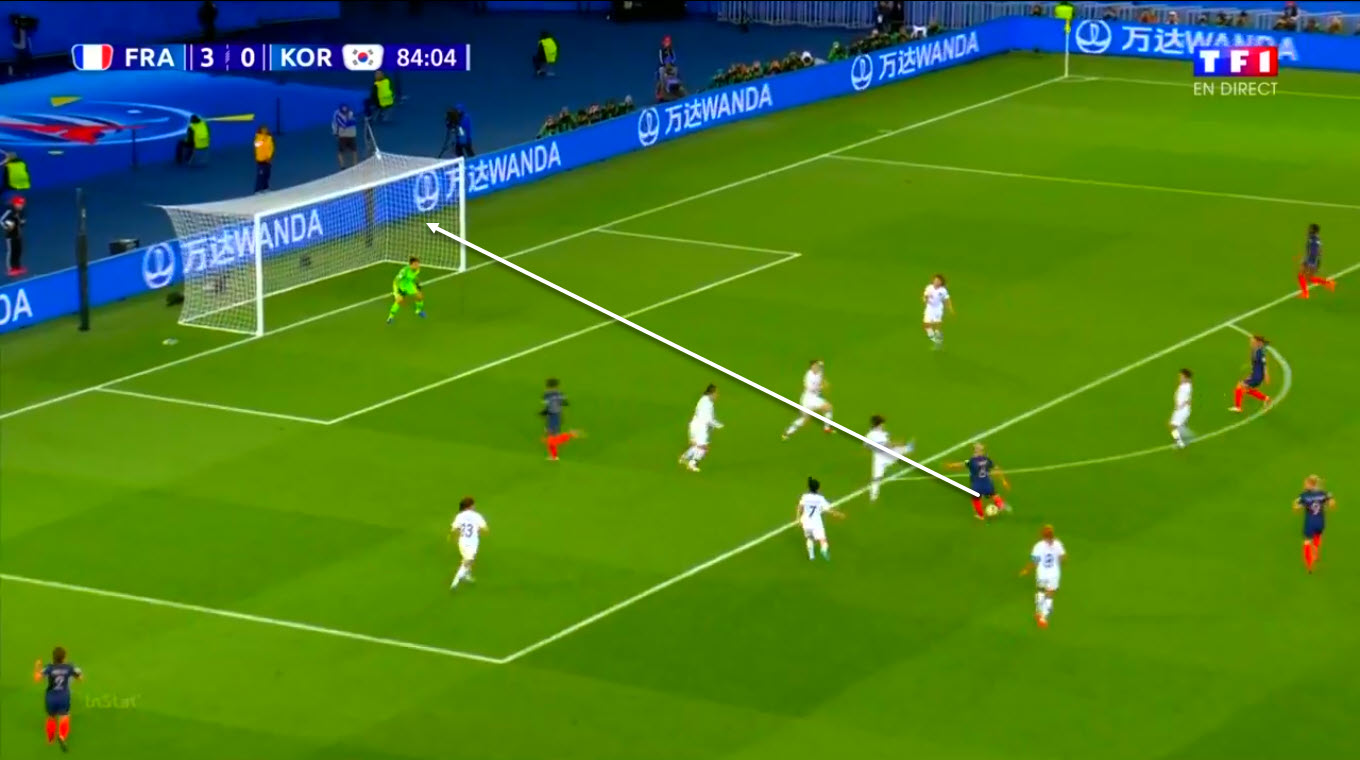 The other example that shouldn’t be ignored is Henry’s magnificent goal against Barcelona in the UWCL final. This goal was fundamental to paving the way for winning the title against Barcelona after going through a long journey that ranges from topping a group containing Bayern Munich to beating teams like Juventus and PSG in the quarter-finals and the semi-finals. It was a solo effort from Henry who made a sliding tackle to win the ball and then aimed for a shot from long range, confusing the goalkeeper and sending the ball to the top right corner. It was an unforgettable goal that marked Henry and this is something that France will obviously need during the upcoming World Cup.

Having players with the mentioned shooting skills and playmaking abilities is surely fundamental and beneficial for any national team. That’s why we believe that France will be the losing side if they ignore a player like Henry during the next World Cup, and not really the opposite. 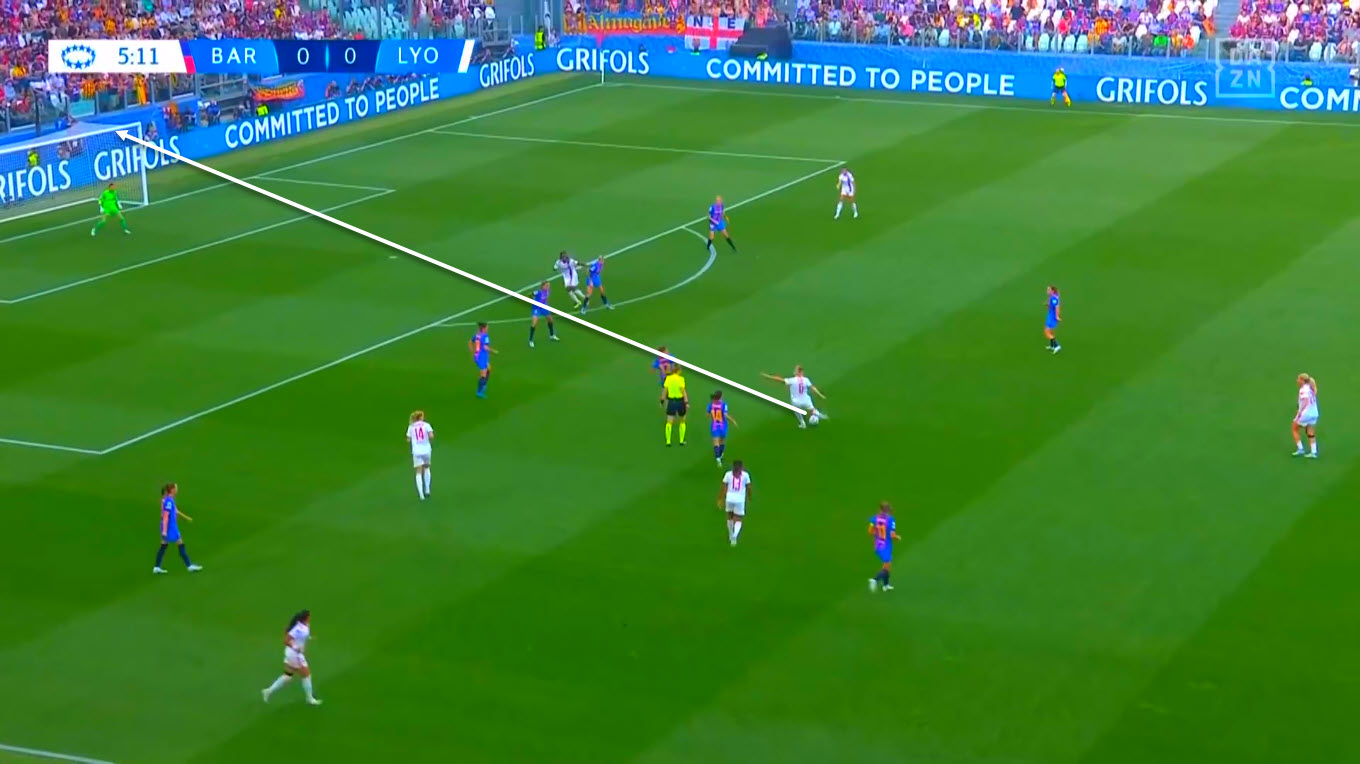 Amandine Henry proved through the years that she is one of the best midfielders in women’s football and she is continuing to prove her worth at Lyon during this season as well. Nevertheless, ending her career in fashion at the French national team would represent an excellent end to an outstanding footballing journey.

It would great, therefore, to see Henry wearing the French jersey once again as everyone knows that such players can only contribute positively to football in general and to their teams in particular.