At the end of September, he made his international debut for Argentina, and around two and a half months later, Enzo Fernandez was crowned world champion. Now, he is about to move to a new club with Chelsea and Liverpool interested in him for a record transfer fee.

World champion and best young player of the tournament, Enzo Fernandez inspired everyone at the World Cup in Qatar. The 21-year-old midfielder was on the cards for many top clubs, but Chelsea seems set to win the race. Benfica want to prevent a move in the winter.

In this tactical analysis, we take a look at Fernandez’s role in Benfica’s tactics. Additionally, in this scout report, we will find three possible replacements in case of a departure in January, using data and statistics. Therefore, we will provide data analysis.

Enzo starts as a central midfielder for Benfica but has made great contributions in both areas, adopting the box-to-box midfielder role. Box-to-Box midfielders are primarily involved in a high number of pressing actions in the opposition’s half. When in possession, this type of midfielder does not dribble with the ball on a regular basis but creates chances through passing on a moderate basis.

From a defensive perspective, this midfielder is moderately involved in recoveries and pressing in high areas, though they tend not to do so in close relation to their teammates. 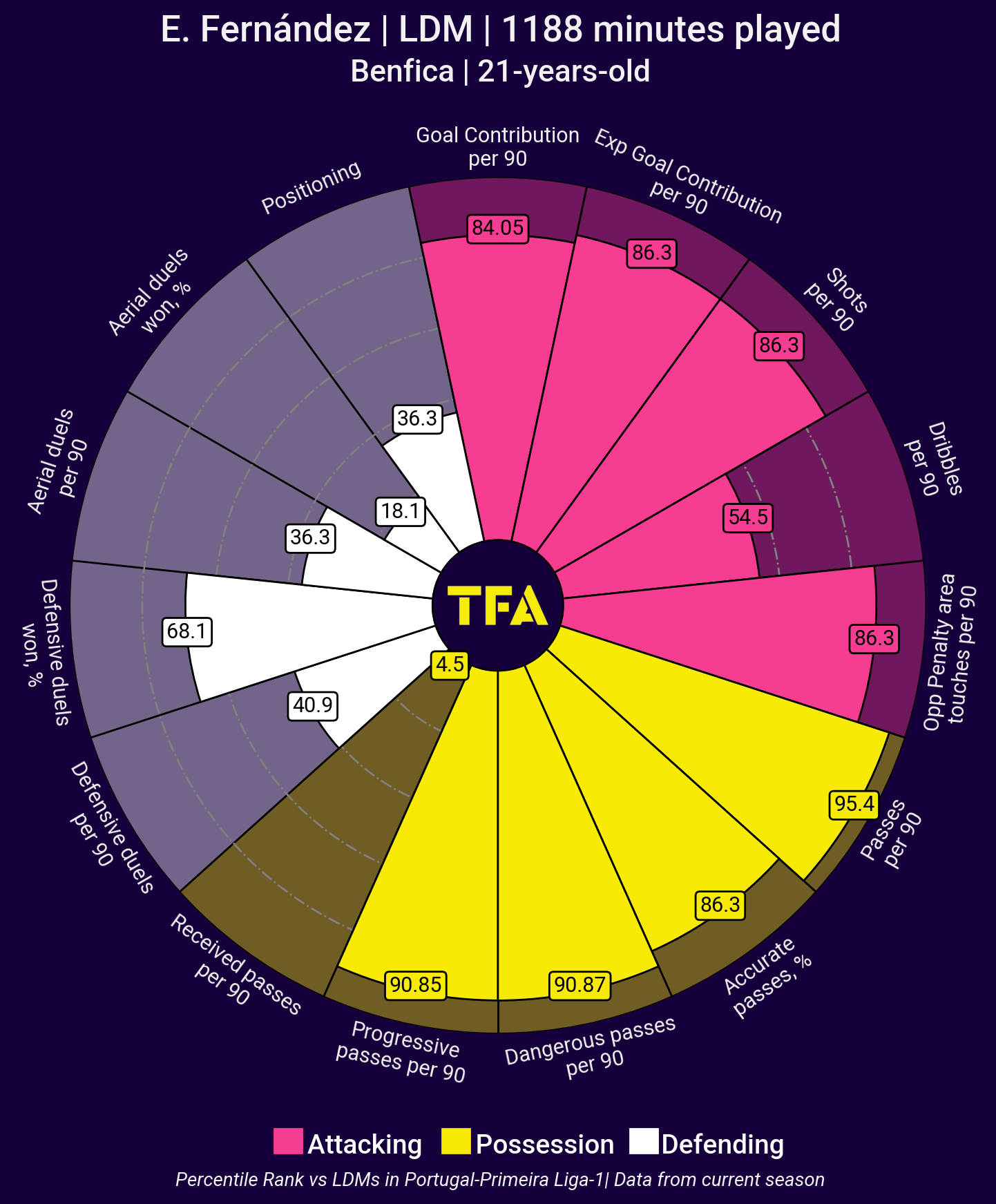 Enzo stands out for his good ball dominance, offering a solid and reliable build-up option for his team, wanting the ball every moment and orchestrating the attacking phase. His high pass completion rate per 90 and number of passes per 90 played prove that. Enzo is the kind of midfielder that takes responsibility and combines sideways balls with progressive line-breaking passes, trying to gain meters for his team into the opposite half. He also possesses good long-range passing, being able to switch the ball quickly from one side to another. 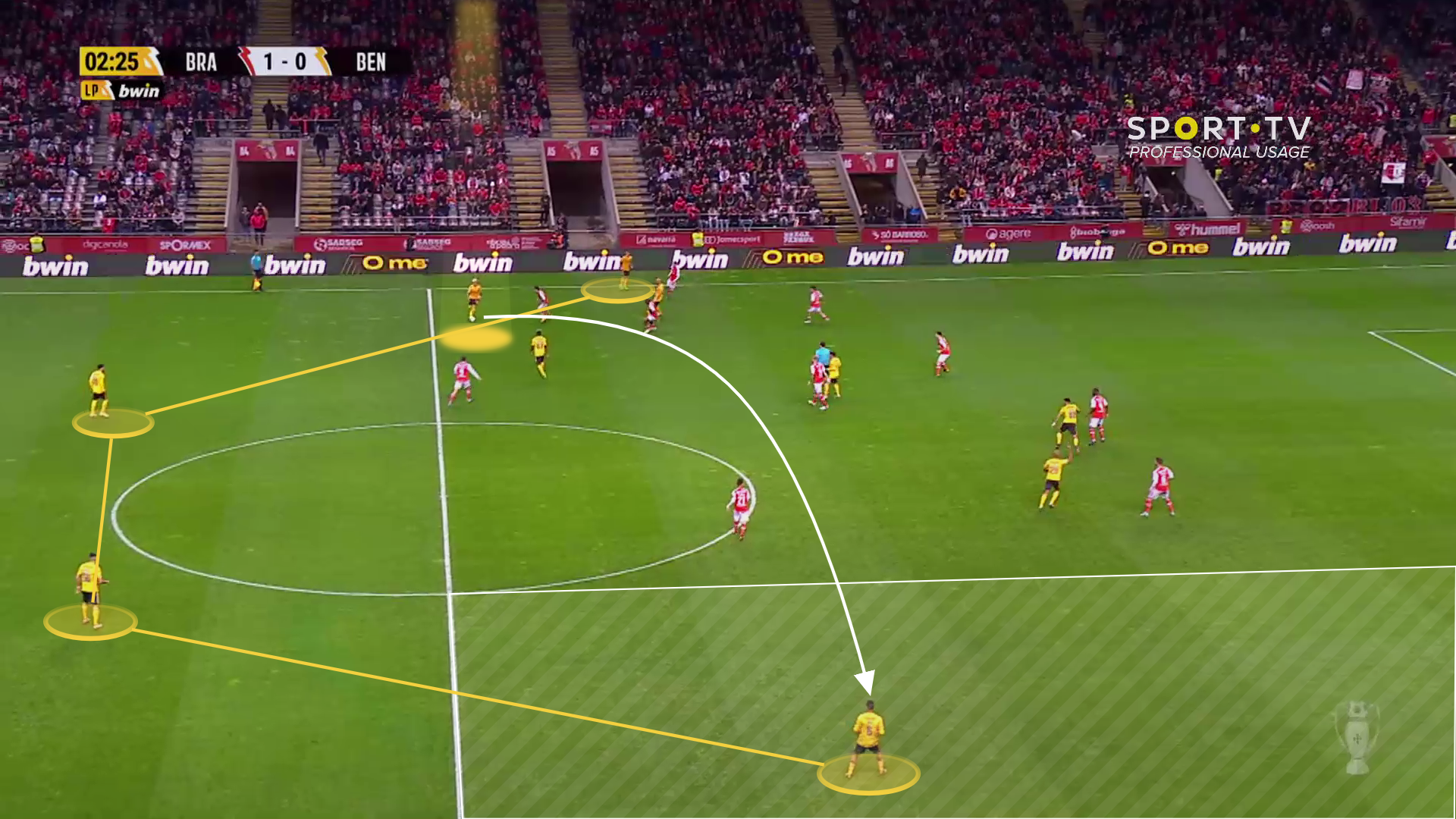 His continuous scan of the surroundings and vision allow him to receive the ball in optimal positions and find the free man easily. Enzo even feels comfortable when receiving in tight spaces, manages pressure and does not hesitate to project himself into attack. Despite not being one of his biggest strengths, he possesses high-power shooting, being a threat in mid-distance approaches. 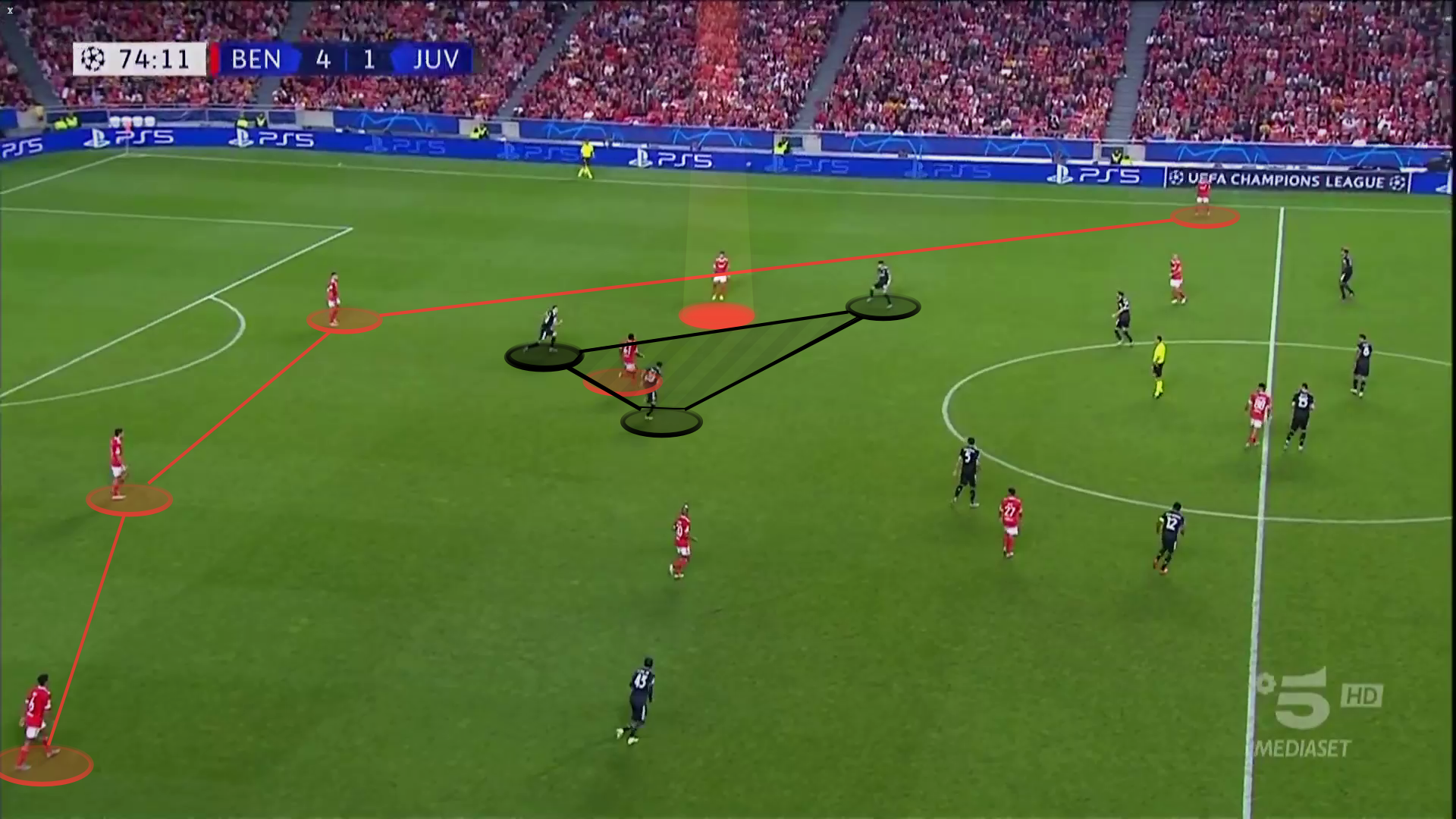 His high stamina allows him to cover a lot of ground, which, added to his good positioning and anticipation, leads to ball recoveries for his team. Enzo’s defensive skills and aggressiveness are outrageous, being difficult to surpass him in 1 vs 1 situations due to his good use of body and arms, and determination when going for a tackle.

Finding a similar player to Enzo Fernandez is not easy. Therefore, we should focus on finding a player who can best play the role that would remain vacant. Other roles are already filled. Benfica has a defensive-minded player with Florentino Luis, a completion player with Rafa Silva as well as a player to provide depth and imbalance with David Neres. Fernandez provides a complete package of defending and creation. His main role is the organisation of attacks with nearly 100 passes per game on average. Benfica will need to invest in a new organiser for their midfield.

So, we are looking for a midfielder who can play alongside Florentino Luis in Roger Schmidt‘s 4-2-3-1. Key attributes we considered are decision-making, agility, good passing range, smart movement in the final third and the ability to score goals.

Since Benfica is known as a club that develops younger players in order to sell them for a high fee, we will focus on players with a maximum age of 24. Additionally, we only consider players who still can be developed with a current market value below 15 million euros. The player needs to be a starter straight away to replace Enzo Fernandez as soon as possible. Therefore, the player must have played more than 600 minutes in the current season. Target markets of Benfica’s recruitment strategy are the South American leagues in Brazil and Argentina, the Dutch Eredivisie, the German Bundesliga, the French Ligue 1 as well as the top two leagues in Portugal. That is why we filter for players in these leagues.

One of the players best placed to provide continuity to Enzo’s organisational and creative role is Joey Veerman, a 24-year-old PSV midfielder. He ranks very well in the majority of passing metrics with him being top in expected assists, assists, through passes, passes to the final third, smart passes and progressive passes. This is an extremely impressive performance on the ball. 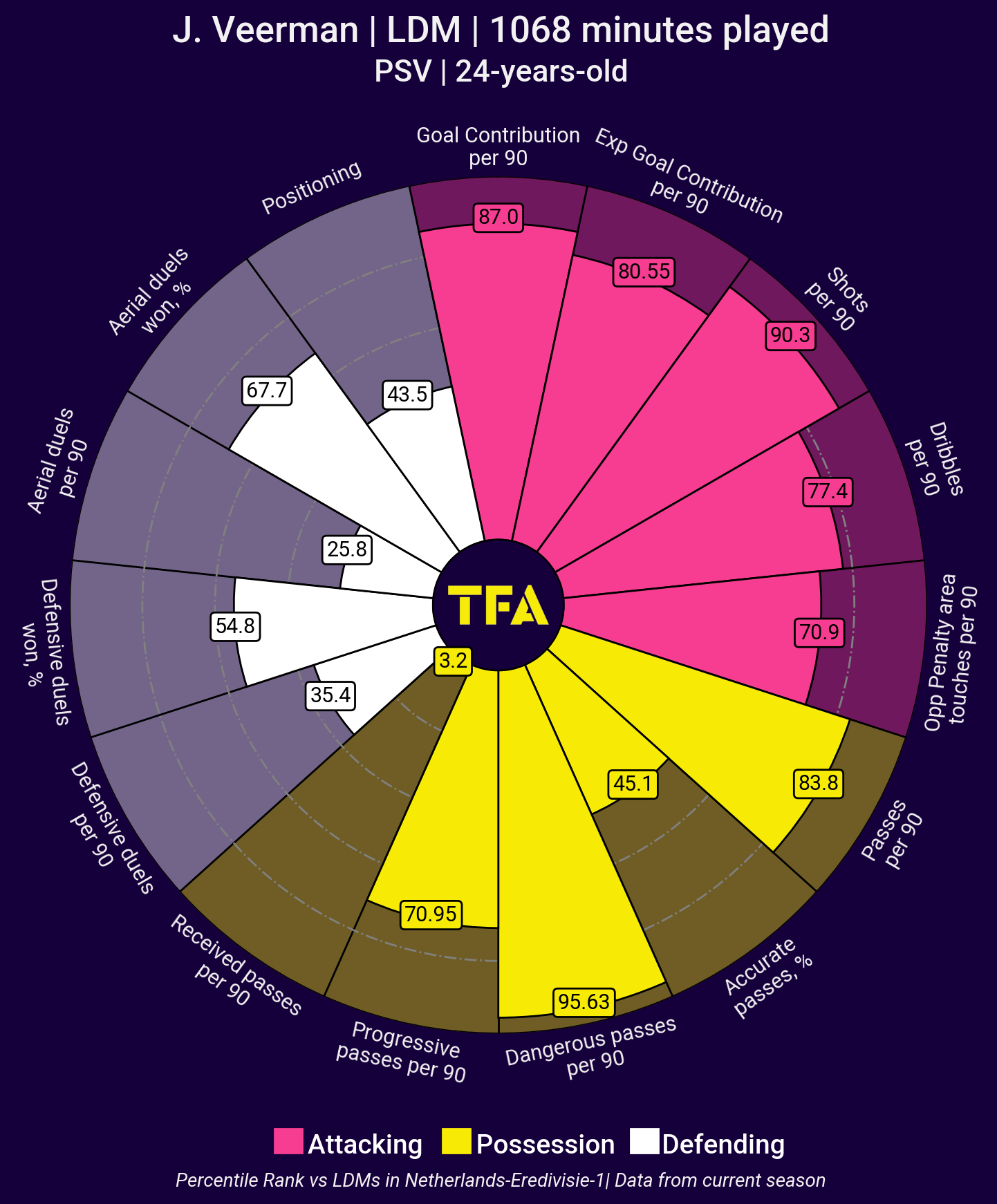 Veerman is a central midfielder usually deployed as part of a double pivot or in a midfield three, depending on the tactics of choice. He is often featured on the left side (despite being predominantly right-footed) as shown by his heat map this season. 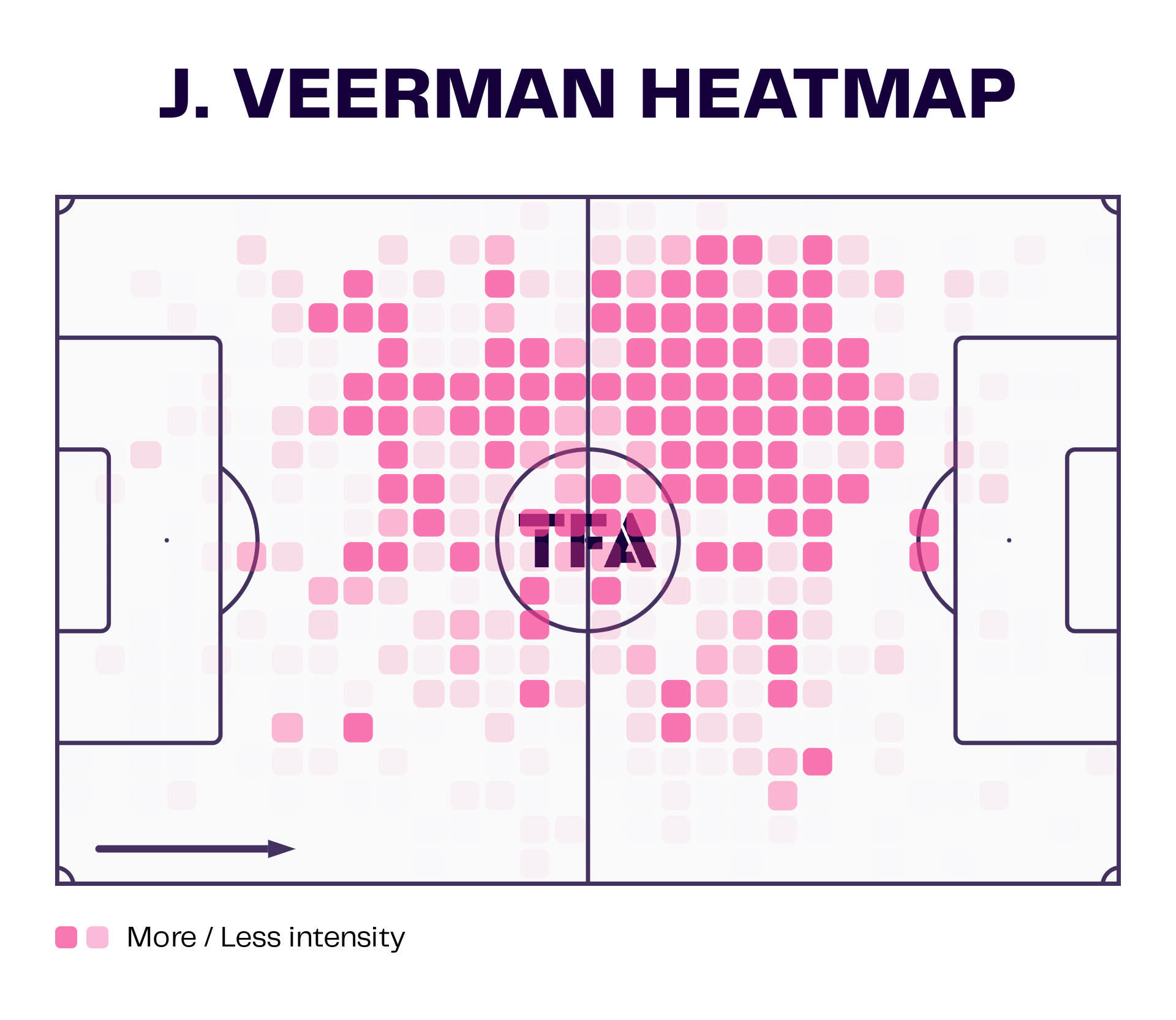 In possession, Veerman likes to drop deeper to get on the ball and orchestrate play with his brilliant passing ability and range. By dropping deep, it allows Veerman more space which in turn allows him to progress the ball easier and dictate the play. This is a combination of excellent execution but also great footballing intelligence to understand the surroundings and identify the potential space.

He is a silky and intelligent footballer who plays with his head and demonstrates brilliant footballing intelligence. Veerman is not a player you associate with pace or power but what he lacks in those areas, he makes up for in quality and reading of the game. 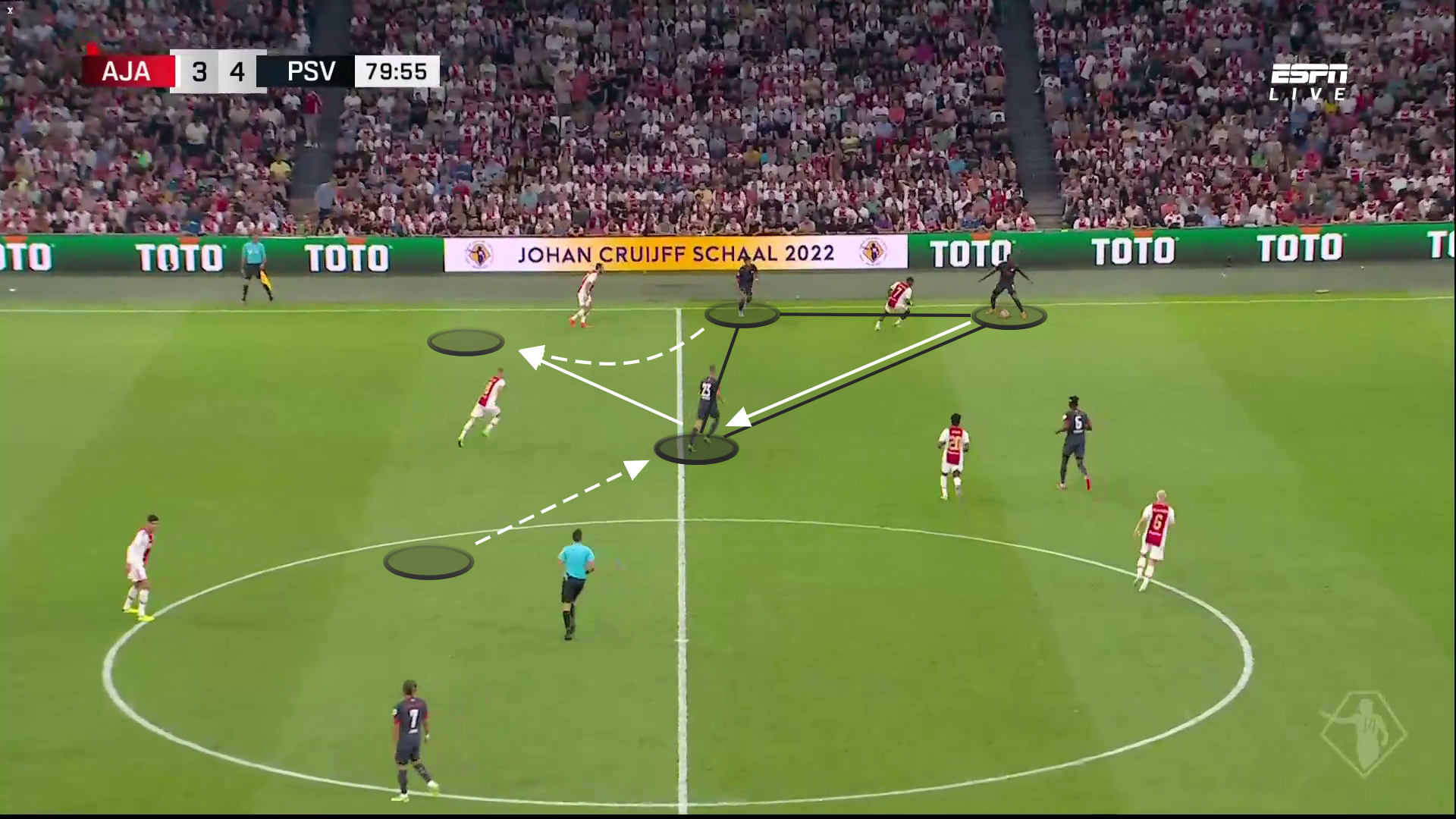 Veerman is not an aggressive footballer, you will rarely see him sliding into tackles or making aggressive duels. However, this does not make him ineffective out of possession. Instead, he uses his head and makes well-timed and calculated interceptions.

Gabriel Menino is always an interesting option when it comes to finding midfielders being fantastic organisers and rarely losing the ball. What has been particularly noteworthy is Gabriel’s versatility. Typically a mixed midfielder, Gabriel actually started out as a centre-back and this defensive nous, combined with his energy and positional intelligence, has seen him deployed at right-back too.

Whether it be in central midfield or at full-back, Gabriel is a player who gets up and down the pitch and generally likes to be on the front foot. While not necessarily known for his dribbling, Gabriel is posting a solid number so far this season, which again is equally useful when playing wide or centrally and also displays his comfort on the ball. 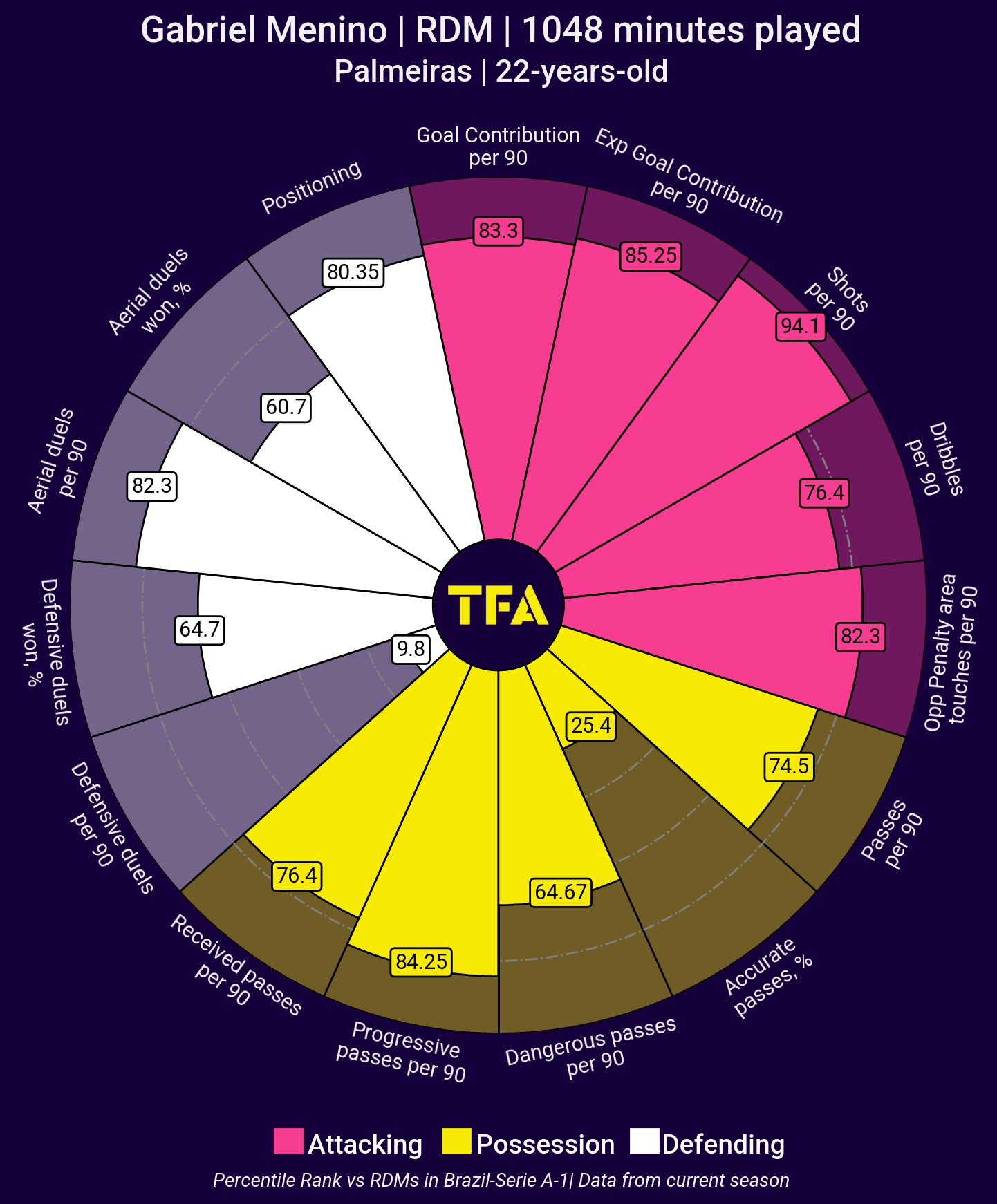 Gabriel looks after the ball well and his good range of passing also helps with his flexibility to play in numerous positions. As well as keeping possession in his own third or spraying out long diagonals, he also has the creativity and vision to contribute in the final third in a more attacking midfield role. 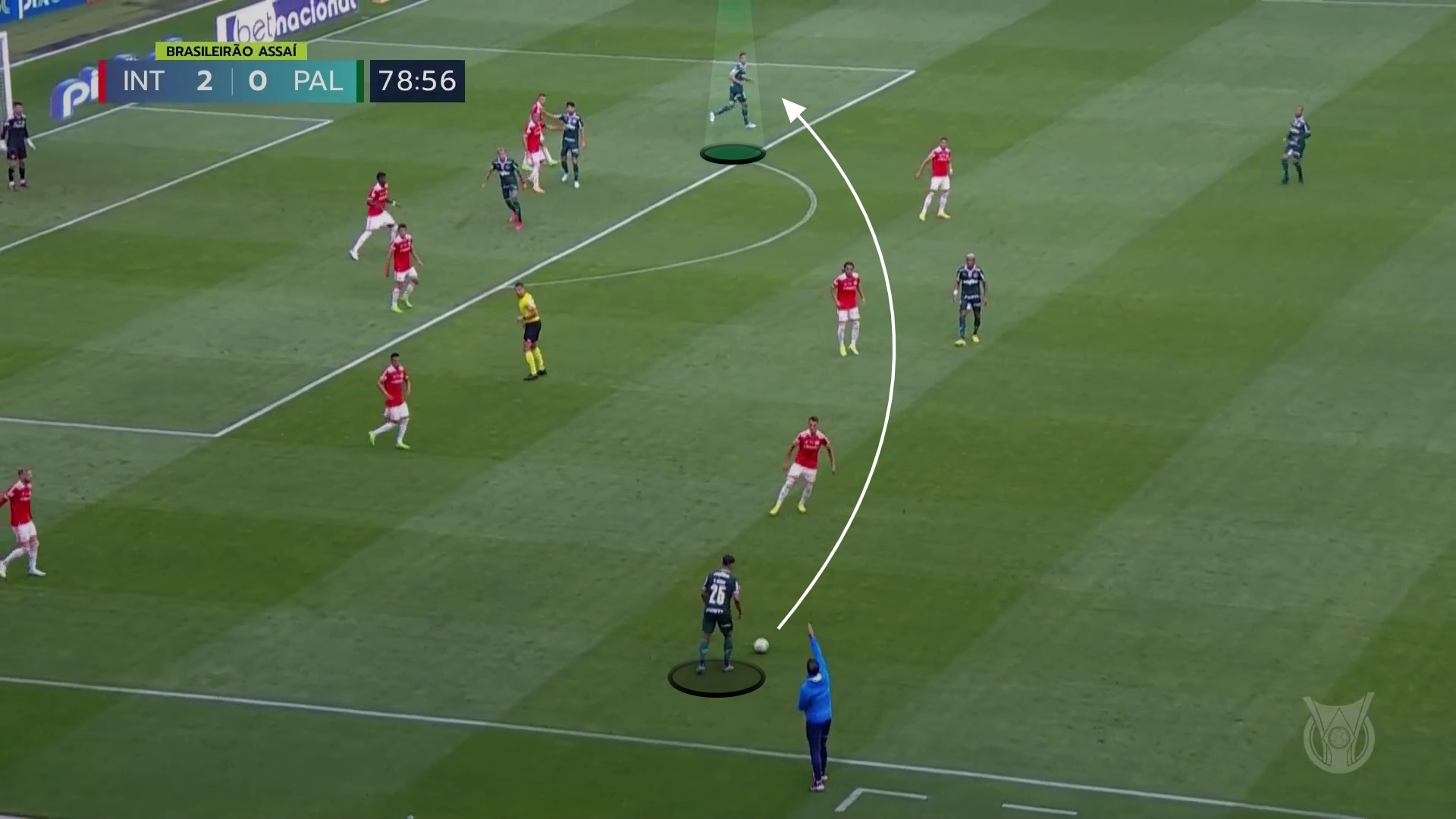 It is this defensive solidity paired with an impressive ability on the ball that makes him such an alluring option.

One player more than capable of playing as an organiser in a two-man midfield is Matheus Martinelli. It’s true that Fluminense is the most playful team in the Brasileirao, but Martinelli is their most organised player with the ability to control the game through passing. He doesn’t have the creativity or defensive ability of Enzo, but he’s very brave and clear-eyed on the ball, both short and long and on the run. 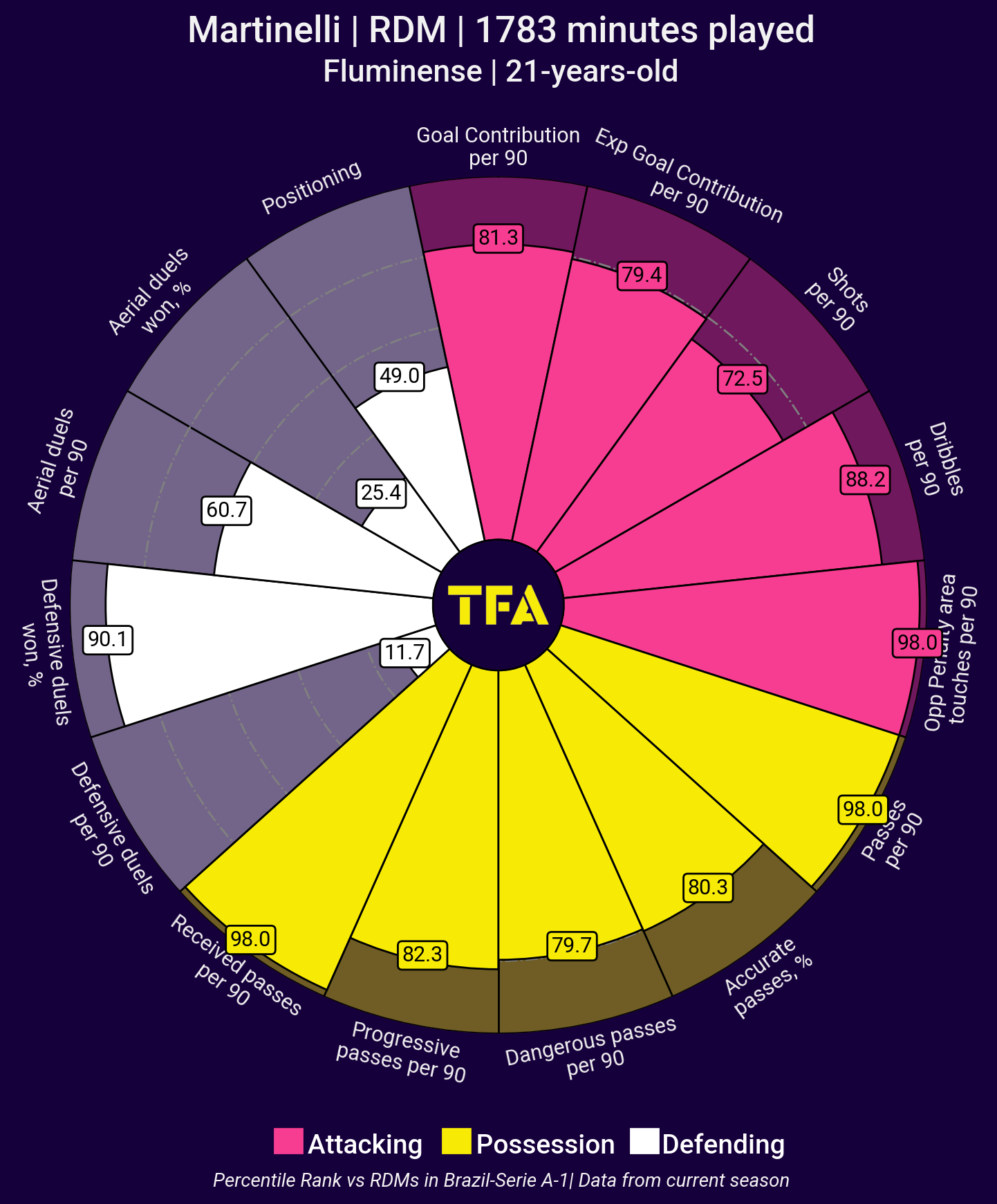 He regularly proves his ability as an intelligent line-breaking passer by consistently finding the striker in between the lines from the deeper areas while he also moved into the final third to link play together and look to thread passes to runners in the channels. 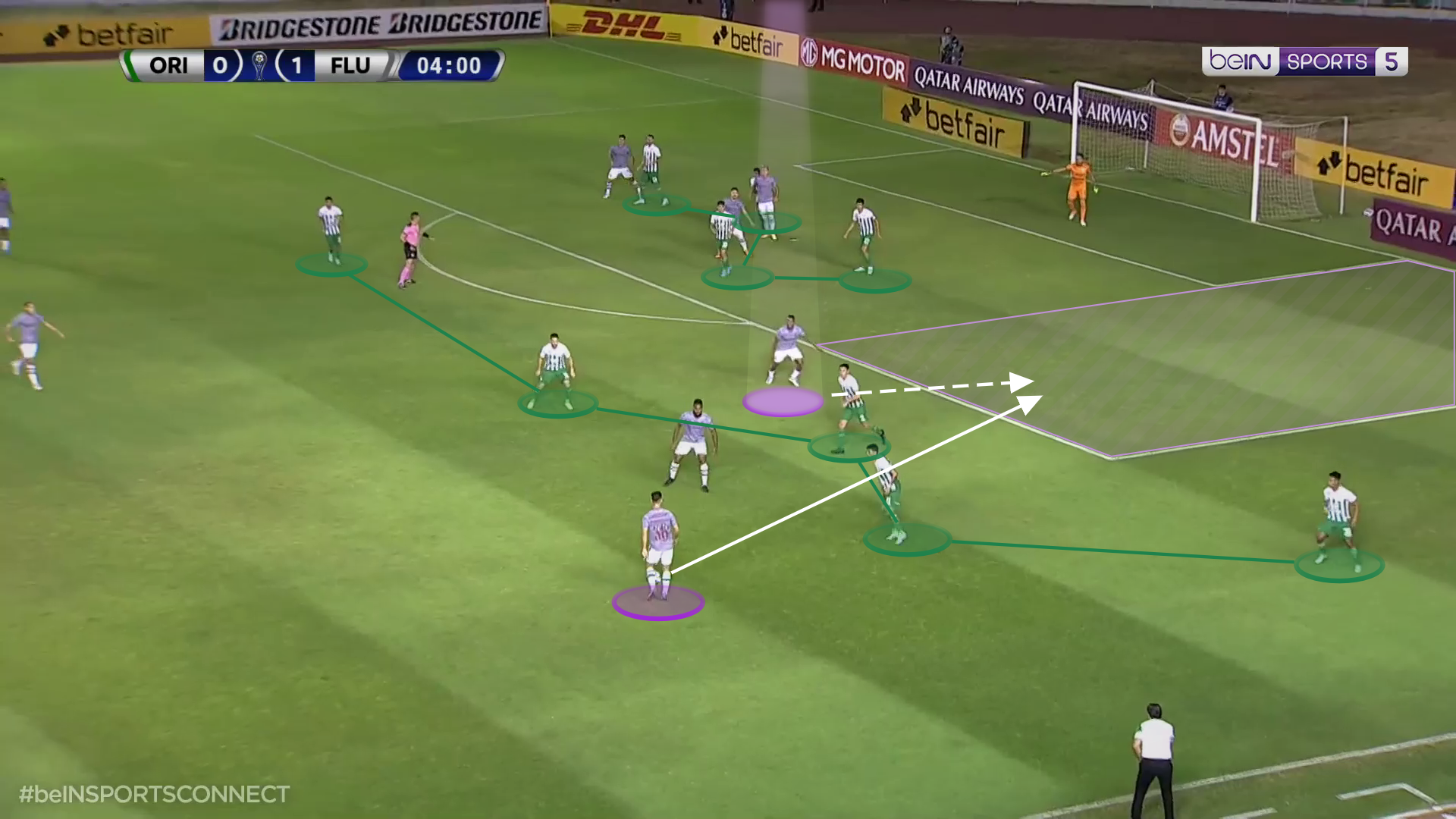 In the defensive phase, he consistently lunges to make well-timed challenges to regain possession in the defensive phase as well as using his reading of the game to make interceptions in the counter-press. As Matheus Martinelli improved defensively, his distribution continued to be high-level as his first touch allows him to turn out of tight situations or release the ball quickly at the base of midfield.

In the opposition half, his immaculate first touch gives him the opportunity to circulate possession rapidly and effectively while also recycling play at a quick tempo.

With Joey Veerman, Gabriel Menino and Matheus Martinelli, we present three high-quality options to Benfica. All three players are affordable for Benfica and have enough potential to improve in the next seasons.

Since Veerman already played under Schmidt, he is the most likely option. However, the scouting work of Benfica in the Brazilian market is outstanding. Therefore, a move to one of the younger and cheaper options in Menino or Martinelli wouldn’t be a surprise at all.