Aleksandr Golovin: A Potential Bargain for AS Monaco

The World Cup, while being the biggest event on the football calendar, is also renowned for unearthing stars of the future. Think of James Rodriguez in 2014, Thomas Muller in 2010 and Philipp Lahm in 2006; all of them had breakout tournaments and then went on to justify the hype, albeit to varying degrees. The 2018 World Cup has been no different, with quite a few players enhancing their reputations on the world stage. One of the biggest of those stories has been that of Aleksandr Golovin, who took the tournament by storm in the opening game and had a key role to play in Russia’s march to the quarter-finals. Playing in a World Cup is the pinnacle of most players’ careers, even more so if they are part of the host nation; however, Golovin’s performances may have ensured that the biggest moments of his playing career are yet to arrive, with a move to AS Monaco signed, sealed and delivered. We will now analyze Golovin’s game and break down his strengths and weaknesses.

Aleksandr Golovin had a good season at CSKA Moscow, scoring seven goals and assisting a further five in all competitions. He came into the spotlight with strikes against Arsenal and Olympique Lyon in the Europa League and was expected to carry Russia’s creative burden at the World Cup. Golovin lived up to expectations and then some; in fact, he made a far greater impact than expected, leading to the aforementioned transfer for £27million. This may end up being a bargain, especially in the hyper-inflated transfer market that has engulfed football. Golovin is just 22, and thus has a very high ceiling for his development. Nevertheless, there are some weaknesses to his game which will need to be ironed out if he is to realize his potential and rise to the top.

Golovin played predominantly as the left-sided central midfielder in CSKA’s preferred 3-4-3 or 3-5-2 formations last season. He started the World Cup playing off the left flank as Stanislav Chercheshov played a 4-2-3-1 system, but moved back to his favoured role when Chercheshov switched to a 3-4-2-1 formation later in the tournament. Golovin had the license to roam in both roles, either coming inside from the left or taking a more loose role in the centre. He is good at finding pockets of space between the lines, allowing him to link up with teammates and drive towards the opposition goal. His heatmaps and touchmaps from the World Cup will illustrate this in greater detail: 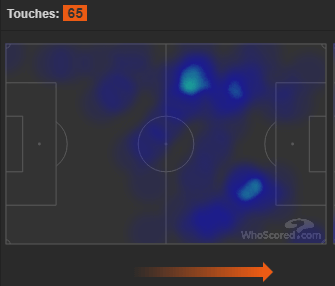 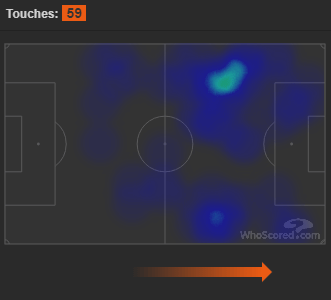 Golovin will be expected to slot into midfield for Monaco, replacing the Portuguese stalwart Joao Moutinho who left for Wolves earlier in the summer. Monaco played in either a 4-2-3-1 or a 4-4-2 last season, and the Russian would take up one of the central midfield berths in either system, looking to link midfield and attack with his dribbling.

One of Golovin’s strengths is his ability to beat his opponent, both on the run as well as from a standing start. His position as a central midfielder makes him unique in this regard, as it allows him to surge upfield through the centre of the pitch, potentially breaking opponents’ defensive lines. Golovin is quite similar to Mousa Dembele and Paul Pogba in this regard, and although he does not possess the physical attributes of either player, his skill on the ball more than matches up to them. A comparison with Monaco’s midfielders and forwards from last season displays this to good effect: in the Champions League, Golovin attempted 1.84 take-ons per 90 minutes, with an 82% success rate, which when compared to Keita Balde Diao (2.77, 44%), Youri Tielemans (0.87, 67%), Joao Moutinho (0.39, 100%) and Rony Lopes (4.18, 43%), shows that Golovin was far better, or rather, more efficient at this facet than the aforementioned players. This aspect of his game will be extremely crucial to Monaco’s system, as he can break forwards from midfield to link with the wingers and strikers quite comfortably.

A player in Golovin’s position needs to be able to pick a pass, and more importantly, pick the right pass at the right time. The Russian is able enough at this as well; however, statistically, he is behind his Monegasque colleagues. Golovin had an impressive pass completion rate of 84% in the Champions League last season, even better than Moutinho (82%), while he created 1.51 chances per 90 minutes, which is good but lags behind the likes of Lopes (2.09), Keita (2.16) and Moutinho (1.54). It is the same story with key passes per 90 minutes: Golovin (1.34) does well in isolation, but Keita (1.54), Moutinho (1.35) and Lopes (1.79) once again outscore him here. The important thing to note here is that Golovin’s numbers are extremely similar to those of Moutinho, a player vastly more experienced than him, and whose role he is expected to fill in the Monaco lineup. Keita and Lopes play in more attacking positions and hence may be the players supplying the final ball; Golovin is more likely to set up the chance in the first place, or get the ‘assist for the assist’, so to speak. This identification of their differing roles within the Monaco side will be crucial to his success in the principality. However, Golovin is quite capable of supplying the final ball himself as well, and based on his role in bursting forwards to support attacks, he can often be found near the opposition penalty area, from where he can either shoot or supply the assist.

A surprising part of Golovin’s game is his defensive contribution. He made an astonishing 6.71 tackles per 90 minutes in the Champions League last season but won only 20% of them, which suggests a need to temper this enthusiasm and be a little more efficient while trying to win the ball. An interesting quirk from last season is that Golovin was CSKA’s most booked player in the league, with eight yellow cards; this too points towards a feisty character who may need to channel his aggression a little better.

Nevertheless, these numbers do indicate a willingness to accept the defensive responsibility that comes with playing in central midfield, and with a little more work on the training field, Golovin should be able to marry his undoubted attacking gifts with defensive stability as well. His interception numbers prove this point: the Russian made 1.34 interceptions/90 minutes, more than Keita (0.31), Tielemans (1.17) and Lopes (0.89), and marginally less than Moutinho (1.35). Once again, the similarity, at least statistically, to Moutinho stands out.

Aleksandr Golovin is an impressive young player, blessed with a turn of pace, skill on the ball and positional awareness, all of which makes him perfect for the role he plays for club and country. While there are aspects of his game which need to be improved, he should be able to fit into Monaco’s lineup and be an effective replacement for Joao Moutinho. The Russian has the potential to be a spectacular player, and the stewardship of Leonardo Jardim seems like an excellent place to begin that journey. The following season should be an exciting one in the principality, and one would hope a certain Russian will have a big part to play in it.