Adama Traore: Will he dribble Wolves away from relegation?

There is a player that got all the likes last weekend after scoring a 93rd-minute winner. It’s Adama Traore – the new addition to Wolverhampton’s squad that stopped West Ham from getting their first point of the season.

Traore is known for his attractive style of play which can make people get off their seats. He was once called “one of the best dribblers in the world” and the 22-year-old has proved it on the pitch ever since.

People are wondering if it’s the right time for him to shine in the Premier League after failing to help his ex-team Middlesbrough get promoted. He came in as a sub against West Ham and helped the team get its first three points with a stoppage-time goal and proved that maybe he deserves more playing time and he could be pretty useful for his team.

The main question is: is he good enough to dribble Wolves away from relegation?

Despite the young age of 22, the Spaniard has had a quite interesting career so far. Starting from Barcelona B, changing to Aston Villa then Middlesbrough, he managed to work with multiple managers and tons of different players, but the one he is most compared to is Lionel Messi. Don’t go too hard on him: it is obvious that they are both great dribblers and that is the thing that distinguished their style of play, which is recognisable worldwide.

It wasn’t the start that he dreamed of last season, being benched too often, but he became an important part of the team from January 2018 on, scoring 5 goals and providing 10 assists. But being in the same academy that produced Lionel Messi for a decade is enough to develop an amazing technical ability and become one of the best in what you’re doing. He has some astonishing stats to be looked at as nobody would believe he dribbled past his opponents a whole 267 times in Championship last season. I know it sounds ridiculous the facts speak for themselves. That is over 130 times more than any other player in the league. Eden Hazard completed more dribbles than anyone else in the Premier League, ahead of Wilfried Zaha and Leroy Sane in second and third respectively. He could not be compared to Hazard and Messi in any other occasion, but his physical strength and speed are ones to be jealous of. He can conquer every opponent and in terms of running, there is no other player that can go to the wing as fast as him. The record Wolves signing averaged 7.1 successful dribbles per game as did the world record signing Neymar for PSG. 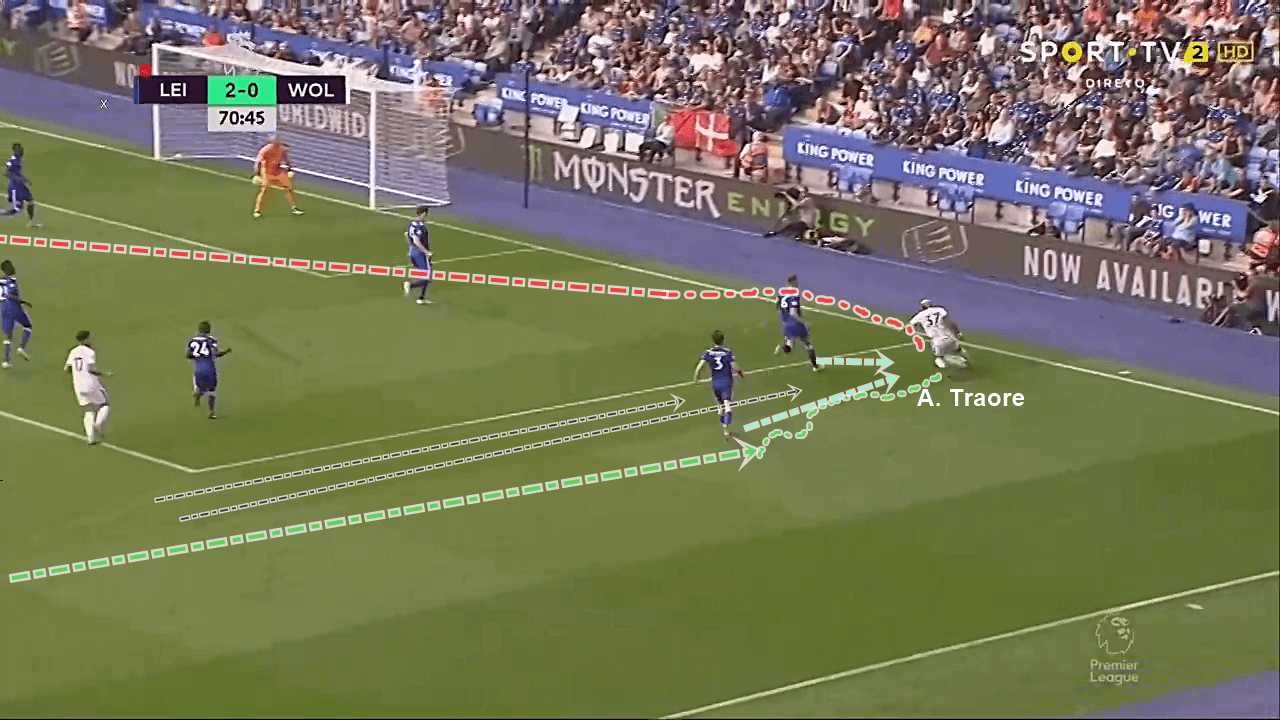 He came from the centre, dribbled past the defenders on the edge of the box and made a perfectly measured cross to Leo Bonatini who missed the opportunity.

It hasn’t been all perfect during his spells at this teams, as he was inconsistent in his performance, but his speed and dribbling skills were always there to show that he should not be underestimated. He is so fast and so good at beating his opponents that he frequently finishes games having completed more dribbles than passes which is kind of a double-edged sword. It is great that he wins his duels and gets the ball upfront this fast, but that is somehow not enough when you lack a good finish and you are not used to passing the ball. He is often criticised about not scoring as many goals as he is expected to. After dribbling past defenders with no hesitation, he has not-so-strong decision-making in the final third which is kind of a waste.

As I mentioned he is not as good at passing as he made less than 15 completed passes per 90 minutes with 71% pass accuracy in his last game. But I need to mention that two of them were key passes. His stamina could be useful defensively because he is tough to pass through him, but only if he shows some effort and contributes more often.

The new addition to the Wolfpack

As it was at Middlesbrough in the start of last season, Traore hasn’t made his PL start with Wolves yet. He missed their first fixture and started each of the next three benched. Lastly, this happened in the 62nd minute against West Ham to help the team win 1-0 with a shot past Lukasz Fabianski right before the final whistle. This was the perfect proof that he may deserve to take a spot in the starting XI. He made some fantastic moves once he came in with the only thing missing – a finish. He greatly showed his abilities and you could see there is an improvement in his overall contribution to the team’s performance. 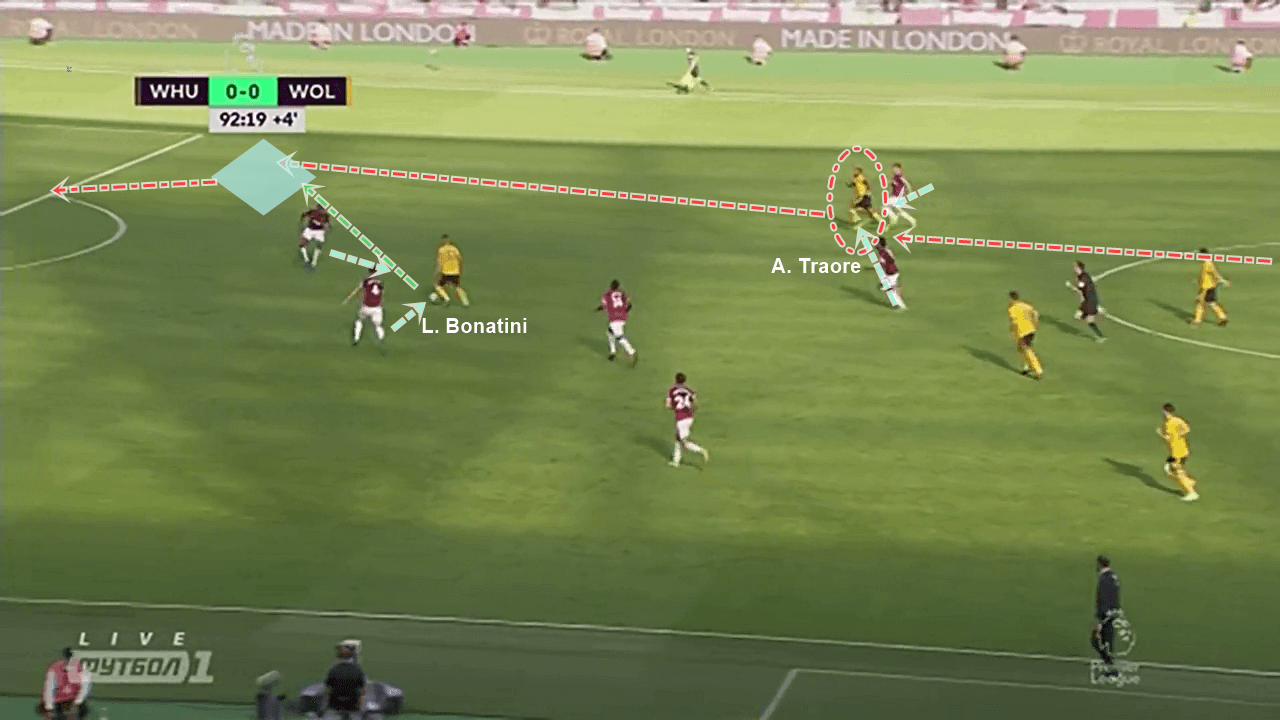 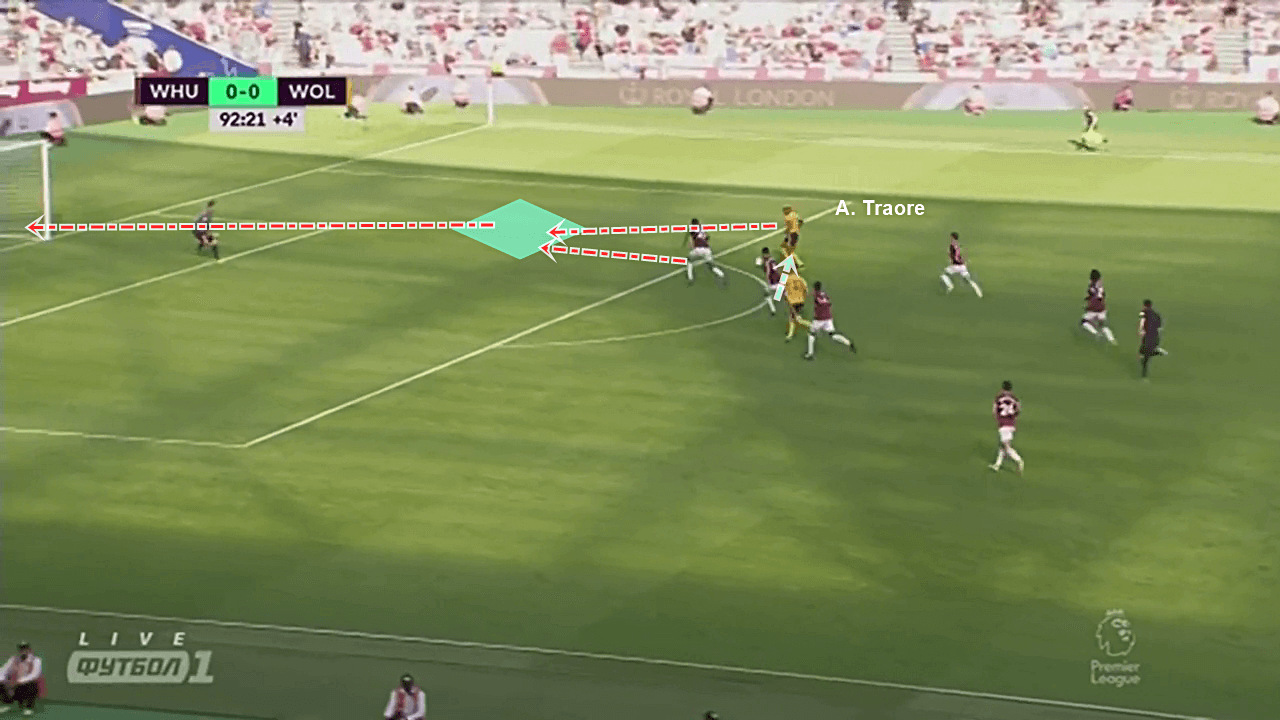 In here Leo Bonatini was carrying the ball while Adama’s off the ball movement and speed amazed once again. He made a run through the whole pitch to reach the box and receive the ball from Bonatini. This time his finish was on point and he led the team to the 3 points after scoring in the last minute.

He needs some improvements in his decision-making and I think that he could double his number of goals and assists from last season. It all depends on tactics and good coaching. He needs to meet Nuno Espírito’s expectations.

Adama stated off pretty well. He created a couple great chances after taking on his markers against The Hammers. He managed to do two key passes and won 7 out of 11 of his duels. His crossing was on point too. Traore’s stats were pretty the same in his first two games for Wolves. He dribbled past 6 opponents and won 8 out of 11 duels against Leicester City. 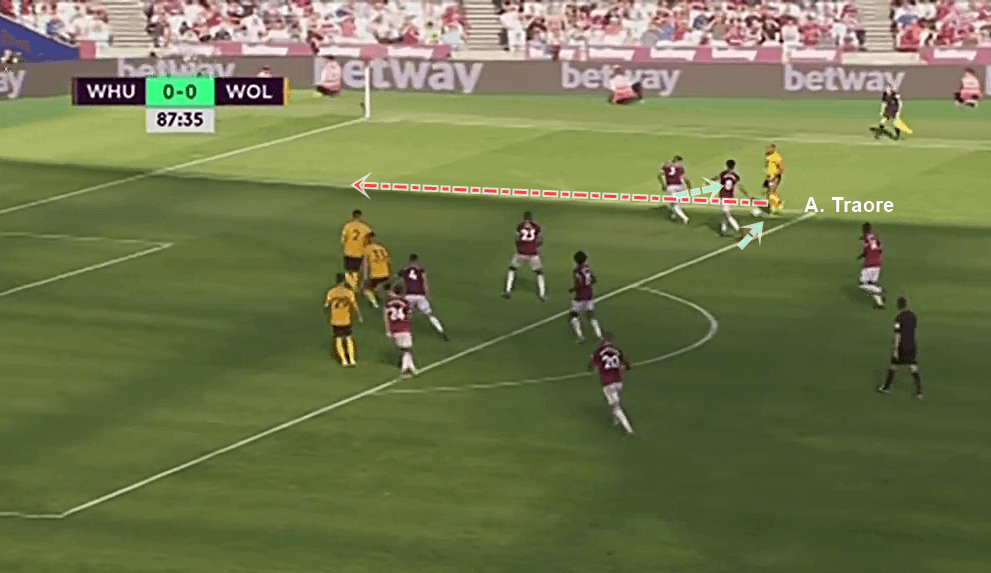 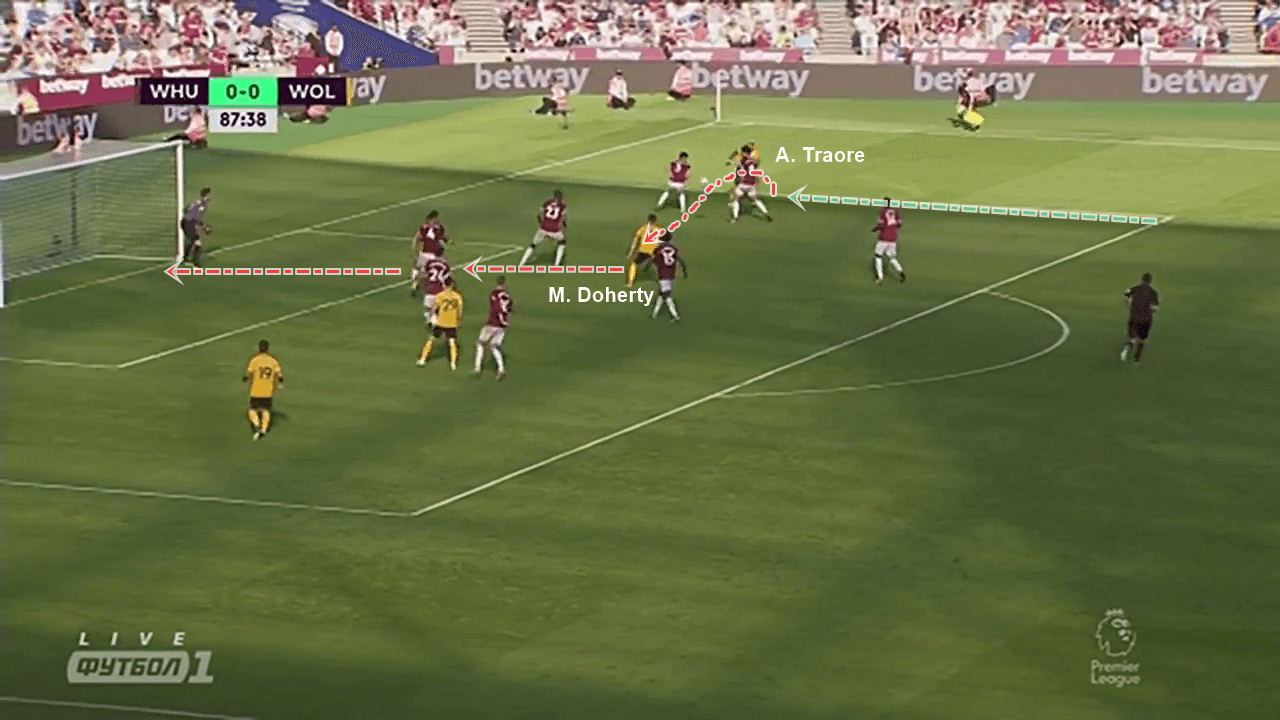 Once again he showed not only his dribbling ability but he managed to send a great cross to Matt Doherty, kicking the ball right in between his two markers. It all ended up with a dangerous shot from Doherty. 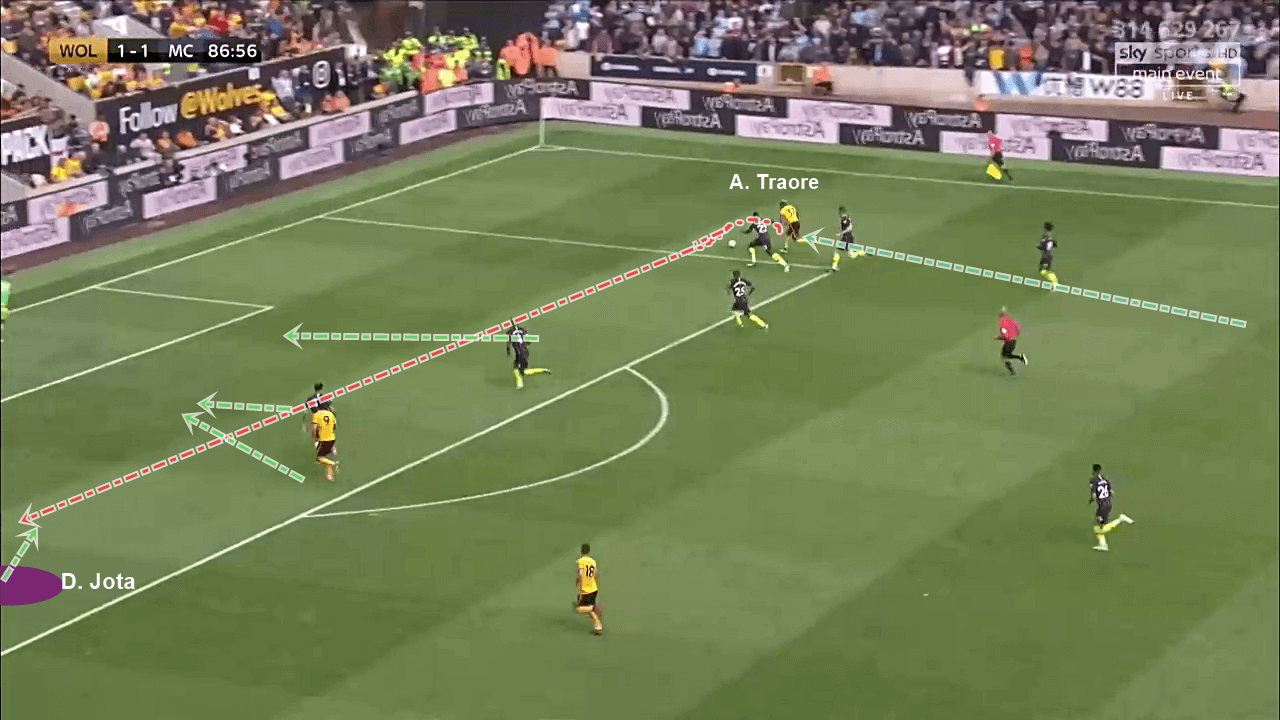 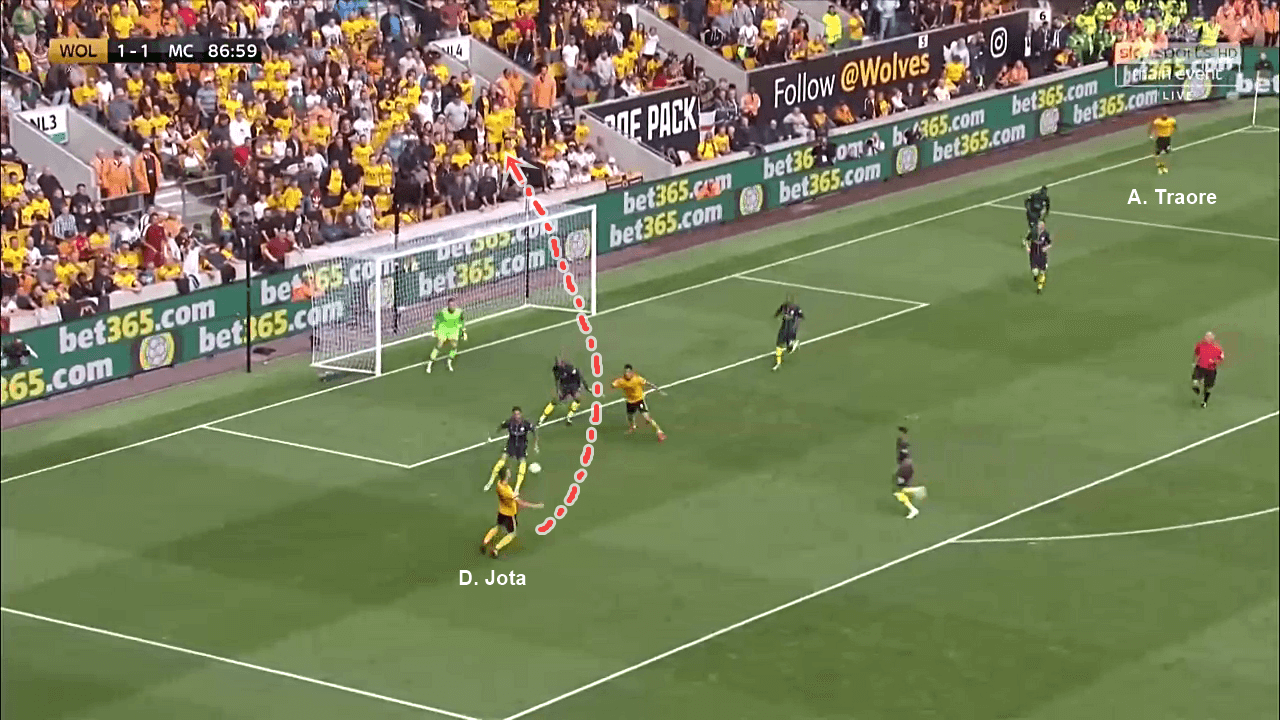 Eat. Sleep. Dribble. Cross. Repeat. That’s how it all goes for Adama. He dribbled past his opponents, got to the edge of the box and made a perfect cross to his teammate Diogo Jota, who managed to shoot, but the shot went off target.  And at that time Adama was already freeing himself with few steps back. That is what he did on several occasions against Leicester City, Manchester City, and West Ham.

Traore’s ball carrying will be very helpful for the team to progress up the pitch. Especially when they have to be sat deep against more aggressive teams. His speed can help the team form quick counter-attacks and if not keep clean sheets, to try to compensate with scoring more goals. To stop him, teams will be in need to foul him as part of their counter-press, though even that can prove difficult. 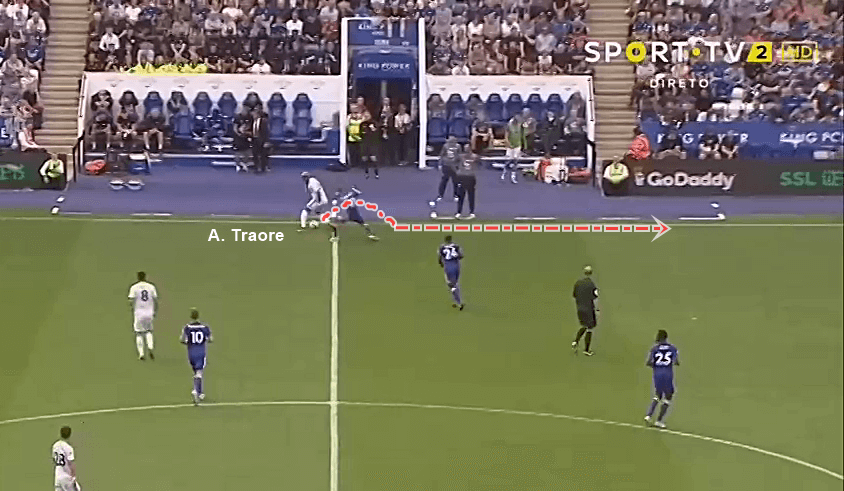 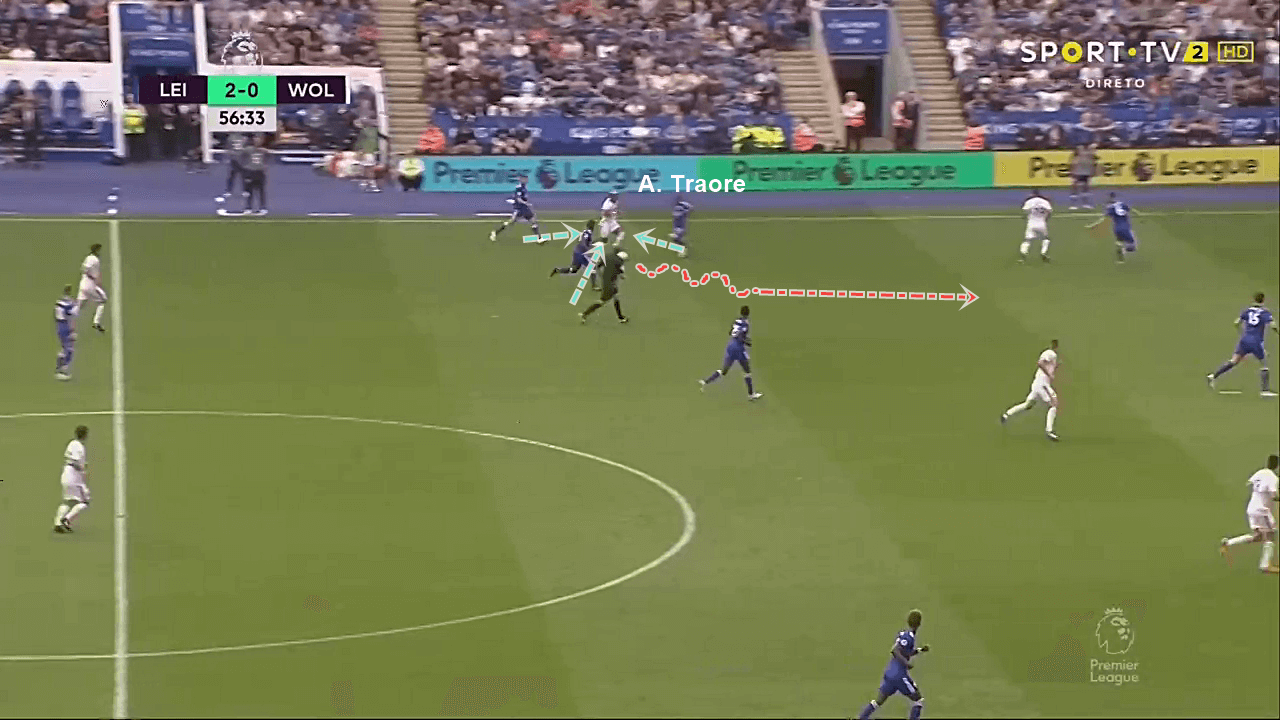 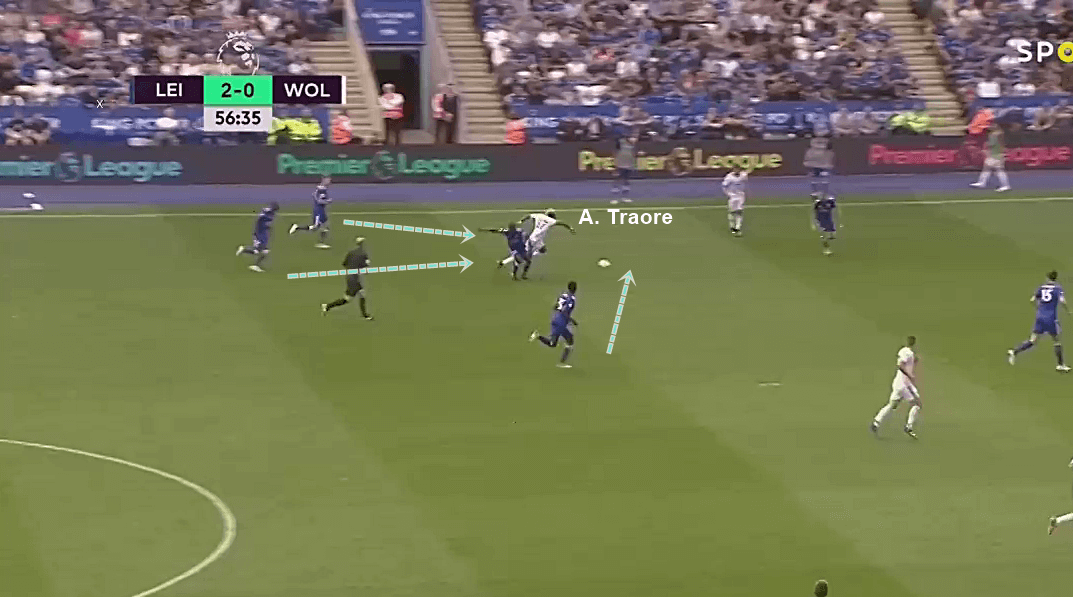 Traore received the ball and managed to keep the possession and run towards the goal. He found himself in the middle of three pressing duels but that wasn’t enough to stop him. He dribbled past them and the opponents had no other choice but to foul him.

There is a dilemma if he should be a starter or he needs to be played against tired defences so he can take advantage quickly. But he is confident enough and he likes to challenge his own abilities so it is for sure that he’ll try and give his best to get more playing time. It should be a team effort to get it out of him. His teammates need to focus and try to rely on him, so he can build up his confidence in front of the goal and improve his decision-making.

He was late for the team bus and subsequently dropped out of the squad last season and saw red against Villa and Sunderland – two of the most important of his campaign so the manager has to tame his controversial character and try to put this into improving his skills.

If this happens, he will deliver more, score more and give the team more options up front. Therefore not only help the team stay out of the relegation zone but maybe get them to a nice position for their first PL season after 6 years absence.