Arsenal Women faced Barcelona Women at the Emirates Stadium for the fifth fixture of the UEFA Women’s Champions League and the game ended with a heavy 0-4 loss for the Gunners who didn’t play their best match of the season. And to put it better, Barcelona were better during this match in many aspects and that’s what allowed them to win without any kind of issues.

Barcelona are now at the top of Group C with 15 points after reinforcing this lead with this win while Arsenal remained at the second spot with nine points. Therefore, they will need to win or draw in their last group stage fixture against Hoffenheim in order to exclude any possible scenario that would prevent them from qualifying for the knockout rounds. Despite having the advantage on Hoffenheim in terms of number of goals, the latter can reach Arsenal in terms of points if they win their last match. That’s why Arsenal shouldn’t complicate their situation by themselves and will have to get a positive result from Germany to officialise their qualification.

In this tactical analysis article, the focus will be on Arsenal’s defensive mistakes and the tactical issues that they faced against Barcelona while exploring the latter’s attacking tactics and variety.

Arsenal started the match relying on the 4-3-3 formation with Manuela Zinsberger as a goalkeeper, Noëlle Maritz, Jennifer Beattie, Steph Catley and Katie McCabe in defence, Frida Maanum, Kim Little and Jordan Nobbs as central midfielders with Nikita Parris and Beth Mead on the wings to support the team’s striker Caitlin Foord, as Bayern Munich’s Vivianne Miedema was only subbed on during the second half.

On the other side, Barcelona played according to the same 4-3-3 formation with Sandra Paños as a goalkeeper, Marta Torrejón, former Paris Saint-Germain’s Irene Paredes, Andrea Pereira and Fridolina Rolfö in defence, Alexia Putellas, Aitana Bonmatí and Mariona Caldentey as central midfielders with Lieke Martens and Ana-Maria Crnogorčević as wingers supporting the striker Jennifer Hermoso. 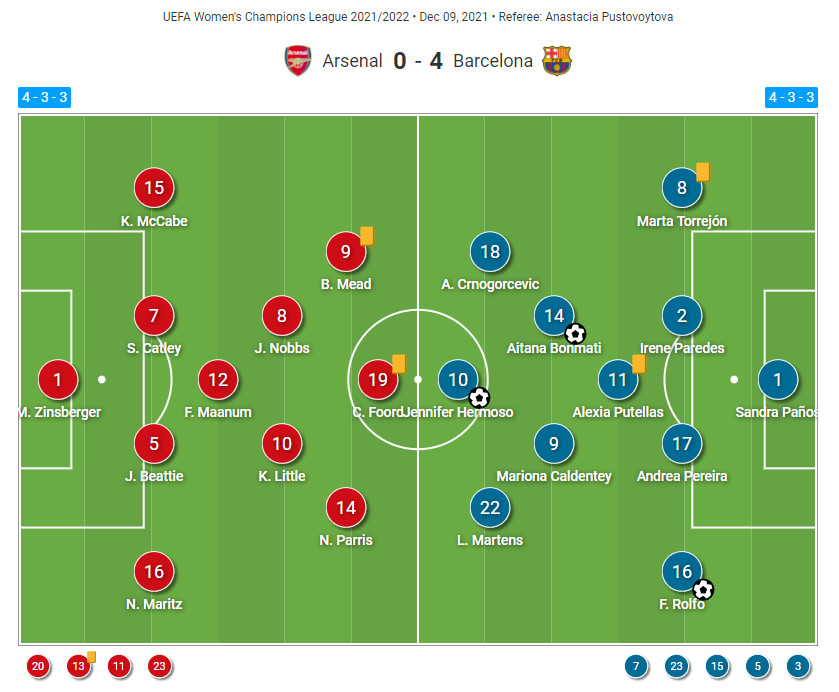 First, Arsenal can’t be harshly blamed for such a defeat against the best European team at the moment knowing that they did their best to not lose with such a result. Nevertheless, there are surely some tactical mistakes that need to be fixed or at least discussed. In terms of defensive performance, Arsenal should have adopted a little bit different approach when knowing that Barcelona attack in big numbers and not just with three attacking players. Therefore, using only the four defensive players with some help from midfielders is not enough for stopping a team like Barcelona. Arsenal should have been more organised in this regard and could have alleviated their opponent’s attacks if they adopted a stricter defensive system involving all team players.

Moreover, in terms of player choices, this match was not an adequate occasion in which Catley can be used effectively as a centre-back. She is an excellent left-back who is not so used to playing as a centre-back and putting her in such a delicate position in a match where the opponent’s attacking players are among the best in the world was not really the right choice to make. 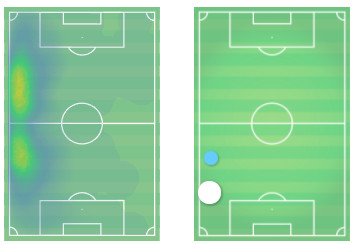 Arsenal gifted Barcelona a big opportunity for scoring their first goal of the match after remaining compact for the 20 first minutes of the match. But then, Beattie made a completely wrong pass in an extremely dangerous position, thinking that Catley was nearer than expected. However, the pass was not powerful enough and Bonmati was intelligent enough to intercept it as she was waiting for such an error. Beattie’s mistake here is that she didn’t scan the pitch and destination of her pass before executing the action, which cost her team a goal. 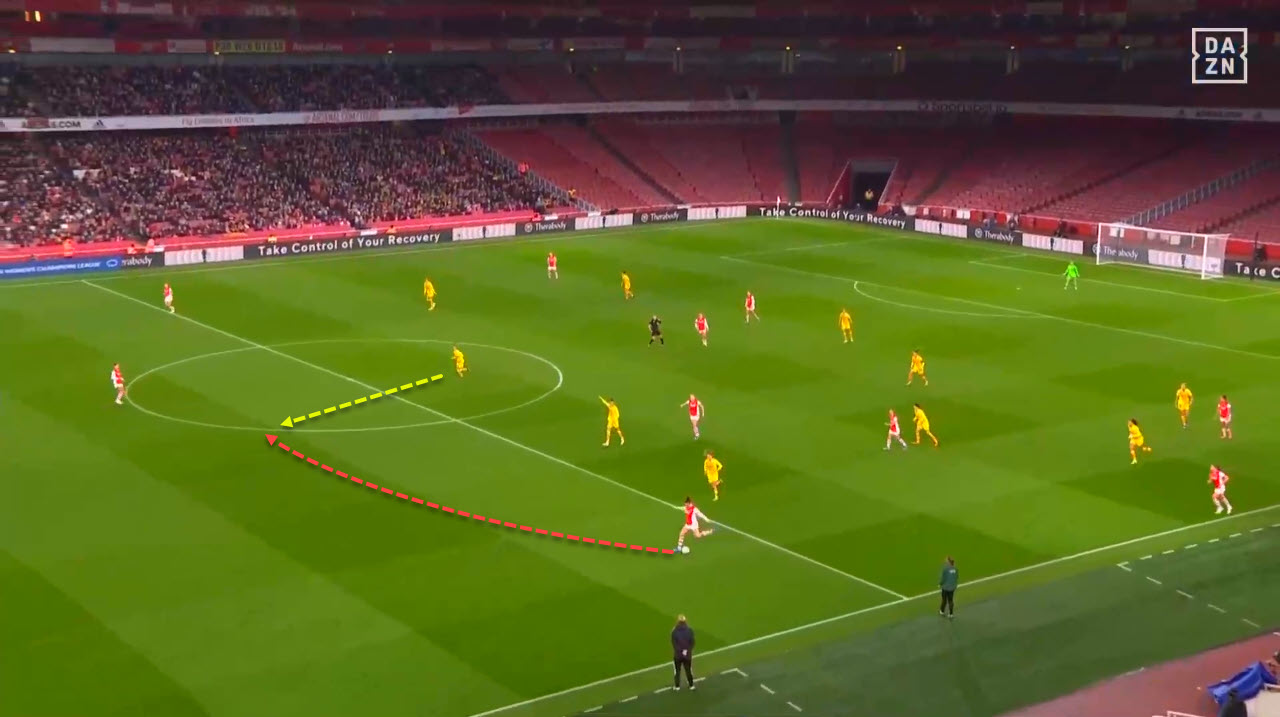 A few minutes later, Arsenal committed another big defensive mistake when Rolfö got the ball on the wing and aimed at crossing the ball towards the penalty area. At that moment, Arsenal’s defensive players marked both Barcelona players who were inside the box but didn’t mark them tightly.

Moreover, Catley didn’t even look at Hermoso and was advanced with one meter ahead of her, thinking that she would anticipate the cross and not let it reach Hermoso. However, this was too risky and she should have been much closer to Hermoso to prevent her from moving easily or shooting. Catley attempted to deviate the cross with a header but her attempt failed and the ball reached Hermoso who exploited the opportunity perfectly by putting the ball inside the net with cold blood and concentration. 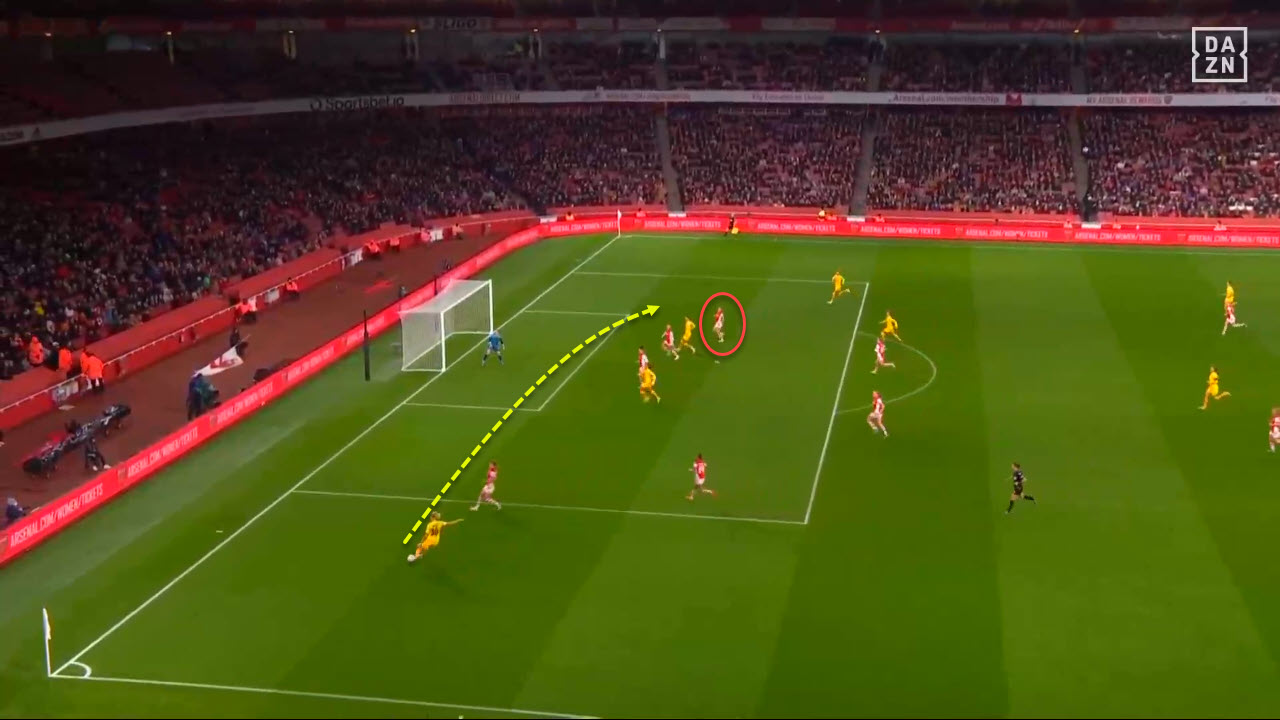 Despite being behind in the score, Arsenal got a few dangerous chances as they shot six shots with only two on target. They were not able to create many goalscoring opportunities due to Barcelona heavy and continuous pressing that made things a bit complicated in the build-up. Moreover, and unlike Barcelona, Arsenal’s attacking system didn’t involve as many players as needed in order to surpass Barcelona’s powerful defensive lines. And even when they did so during the second half and Mead had a golden chance to score, she missed the opportunity despite being close to the goal and facing just Paños, as you can see below. 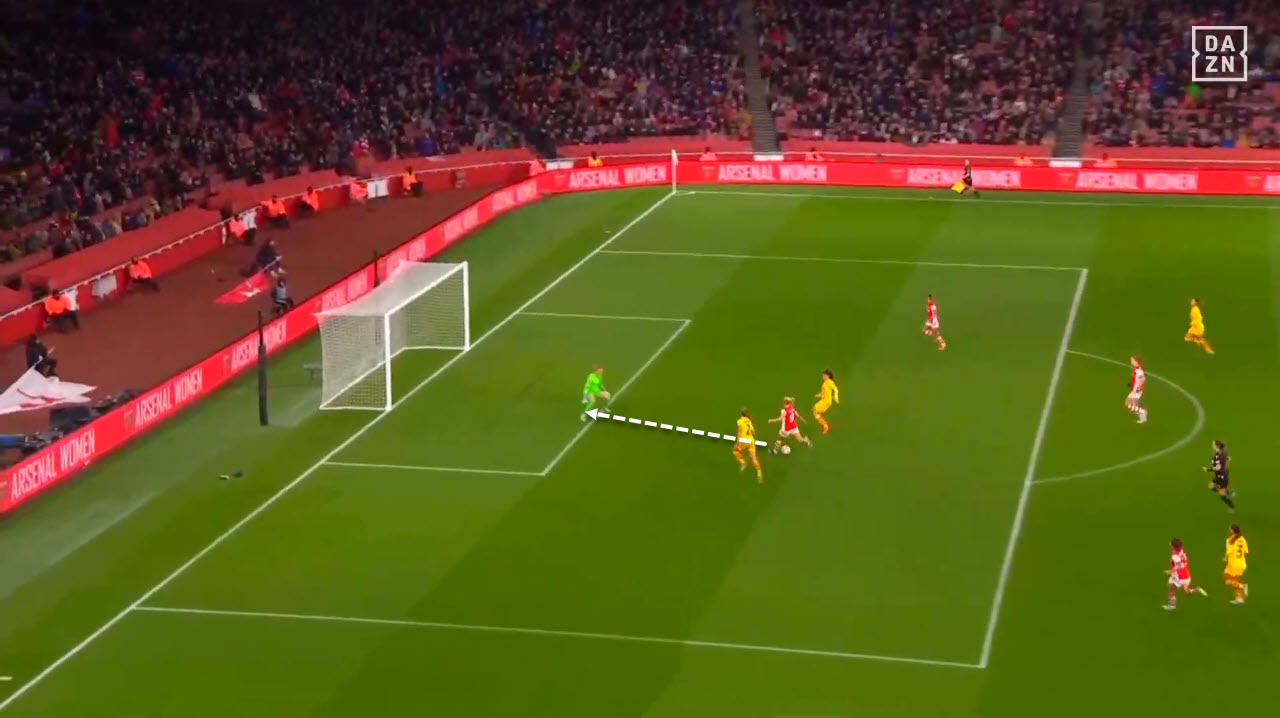 She was able to do much better in this situation given that the goalkeeper came out of her goal. Therefore, Mead had plenty of options to consider in terms of shooting angle and type, yet, she chose the most predictable option. It must also be said that Paños made an excellent save despite the short distance between her and Mead.

As already mentioned in the first part of this analysis, Barcelona were dominant in most parts of this match. And when considering numbers, they were also better than their opponents as they had an average of 71,42% in terms of possession. It was not a passive kind of possession because the team managed to shoot 19 times with ten of these shots being on target. Barcelona’s quality attacking players linked with a quick and smooth attacking system created the difference for their advantage.

It was clear that midfield and attacking players had no problem in exchanging positions so often and getting closer to each other in various instances in order to play quick and short passes to exclude opposing players and advance quickly. This would often result in a situation where Barcelona are in numerical superiority in the final third, just like this example shows. 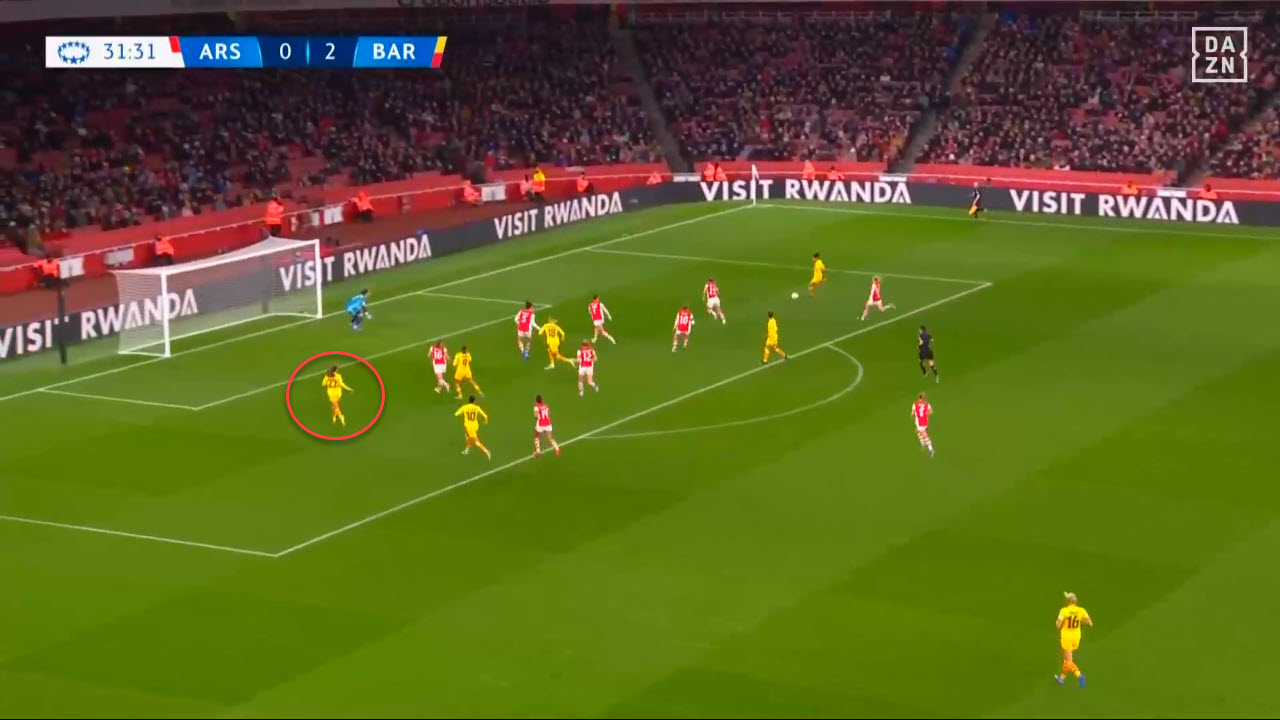 Such a superiority usually frees one player or two from marking in dangerous positions, and Barcelona players are intelligent enough to exploit that numerical superiority at adequate timing. Moreover, the multitude of attacking weapons in this team is extraordinary. Not only the three midfielders are excellent in passing, shooting, creating chances while Caldentey has the advantage of being excellent in penetrations, but also the full-backs have got excellent attacking efficiency when advancing. A player like Rolfö used to be one of the best European wingers when playing for Wolfsburg and Bayern Munich. It was a creative choice from Barcelona’s head coach to employ her as a left-back and exploit her excellent attacking skills in games like these since he is not able to employ her regularly as a left-winger given that Martens is also a crucial player on the wing.

And as proof, Rolfö scored the third goal for her team after advancing to press and collecting the ball following a teammate interception. This goal proved not only Rolfö’s great attacking and especially shooting skills once again but it also showed that Arsenal suffered under Barcelona’s high, efficient and well-organised pressing. 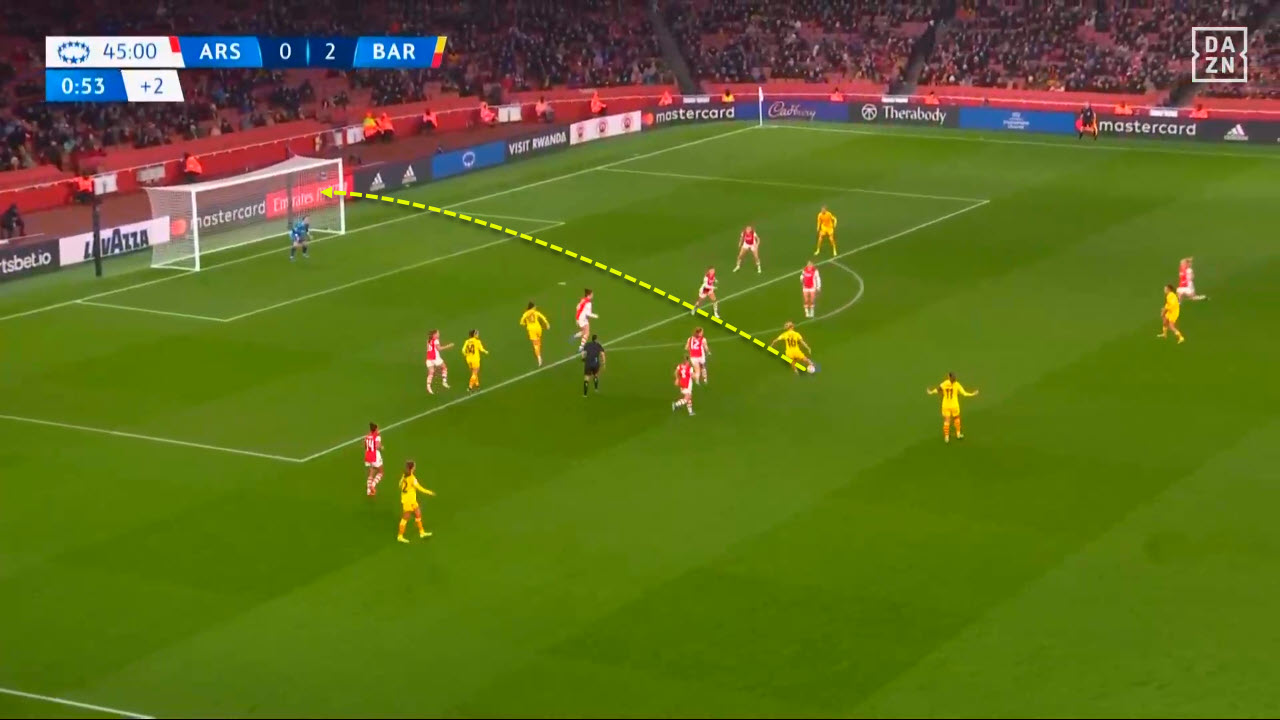 This match will serve Arsenal’s head coach a lot in assessing his team’s performances and identifying what to work on ahead of the upcoming games. But at the same time, the team should bounce back as soon as possible to not let this loss affect the players’ motivation or confidence.

For Barcelona, this win can only make the players more motivated to win even more games and have a boost to train better and play better. If they continue putting on such performances, Barcelona will not be easily stopped by any team in Europe at the moment.