Serie A 2021/22: How Fiorentina’s performance against Salernitana showcases their Serie A revival – tactical analysis

ACF Fiorentina was a true Italian powerhouse with the likes of Gabriel Batistuta and Rui Costa leading their attack. As time has passed, the Gigliati have unfortunately lost their way, with their last appearance in the UEFA Champions League occurring over a decade ago. The dysfunction of Fiorentina can be displayed through the rapid change of manager over the last couple of seasons, as no head coach dating back to 2015 has survived longer than the two seasons at the club. While this manager merry-go-round has been a detriment to Fiorentina, current manager, Vincenzo Italiano has shown signs of being a lasting figure within the club, bringing a sense of continuity and familiarity, with his side playing patient and pretty football. On the eve of Fiorentina’s game against Salernitana, the Purples sat 5th in Serie A, with their opponents sitting in last place. With this game taking place in Florence, all expectation was placed upon Fiorentina to take care of business and continue their fantastic form.

This tactical analysis will look into Fiorentina build-up variations and how they looked to progress forward. Along with unpacking, Salernitana defensive issues. Lastly, I will be discussing Lucas Torreira’s role within this team.

Fiorentina made use of a 4-3-3 formation with Pietro Terracciano in goal. In defence, Cristiano Biraghi and Real Madrid Loanee Álvaro Odriozola with Nikola Milenković and Lucas Martínez Quarta at centre-back. In midfield, Lucas Torreira, Giacomo Bonaventura, and Alfred Duncan. In attack, Nicolás González, José Callejón and Dušan Vlahović up-front. 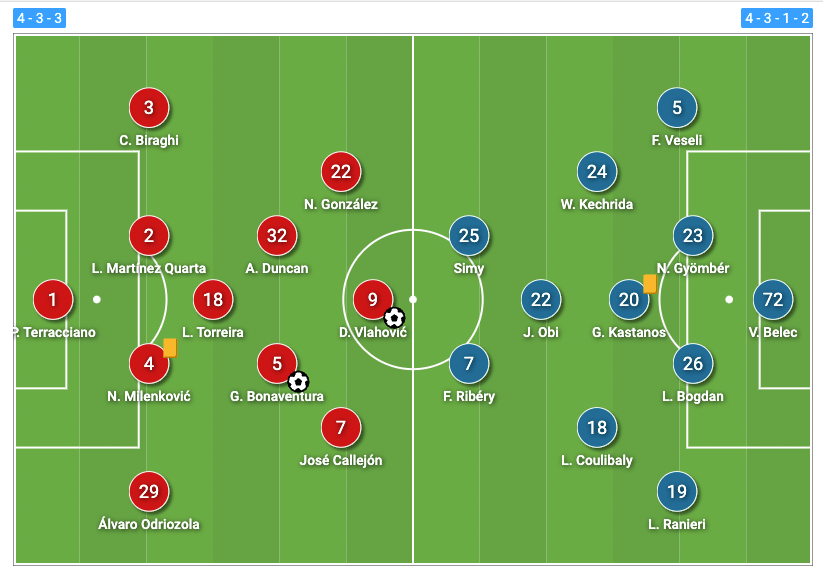 As mentioned prior, Fiorentina, under Vincenzo Italiano, has been a fascinating watch throughout the season so far, and they did not let up during this match. Fiorentina looked to play out against their opposition’s press, and during the first phase of play, the ball was targeted out wide as soon as possible. Fiorentina would make use of passing into central passages of the pitch and moving forward through that avenue. With this being said, Fiorentina’s greatest strength was progressing through the wide areas. Another common theme that was utilised was their fluidity and use of wall passing, especially during the initial phase of play.

Here we see centre-back Lucas Martínez Quarta in possession, about to make a pass to right-back Álvaro Odriozola under no actual pressure on the far side of the pitch. 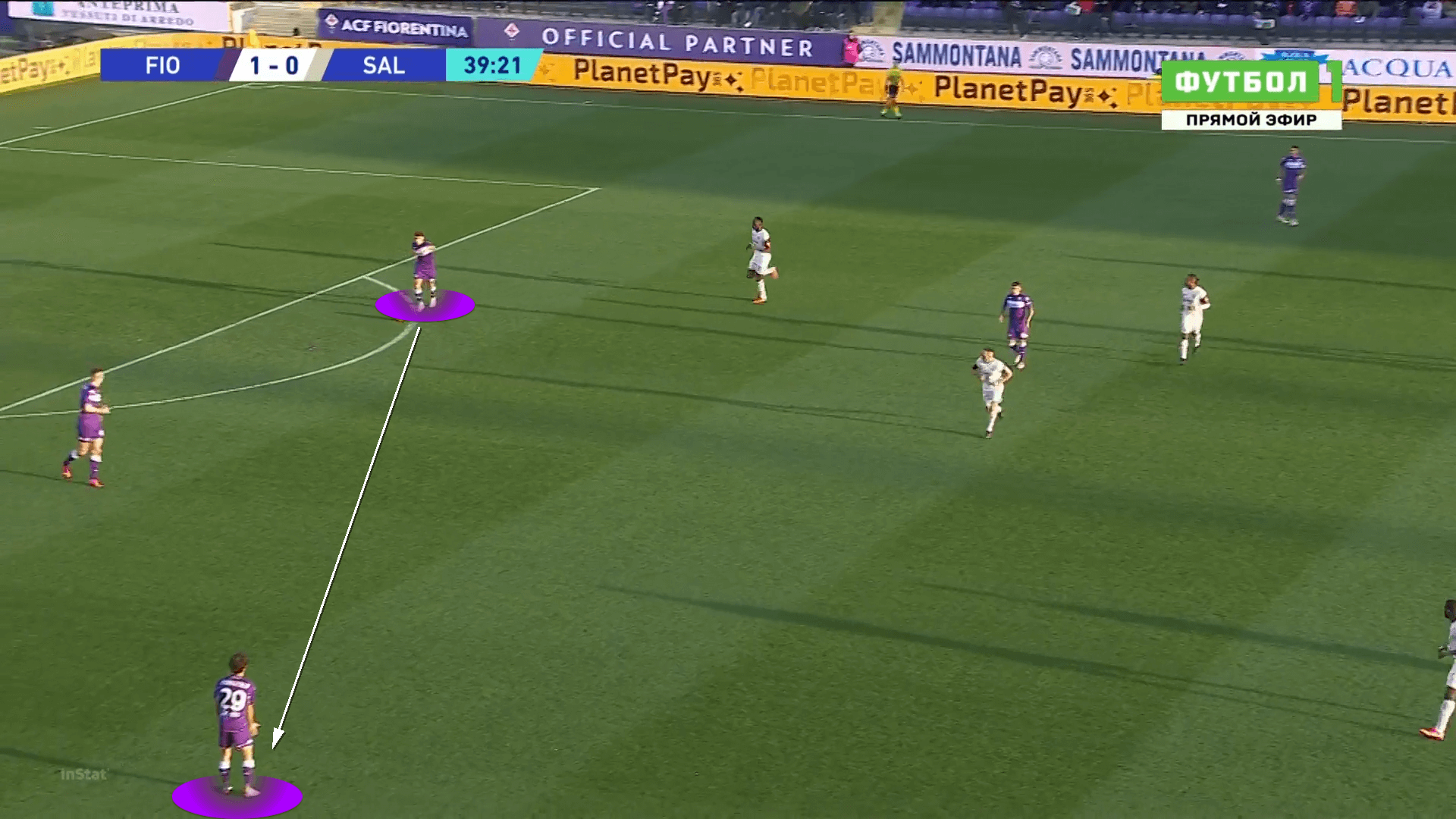 Once the ball eventually arrives at Álvaro Odriozola, he delivers a first-time pass to Nikola Milenković. While this is ongoing, two Salernitana players are trying to disrupt Fiorentina’s passing game and apply pressure. 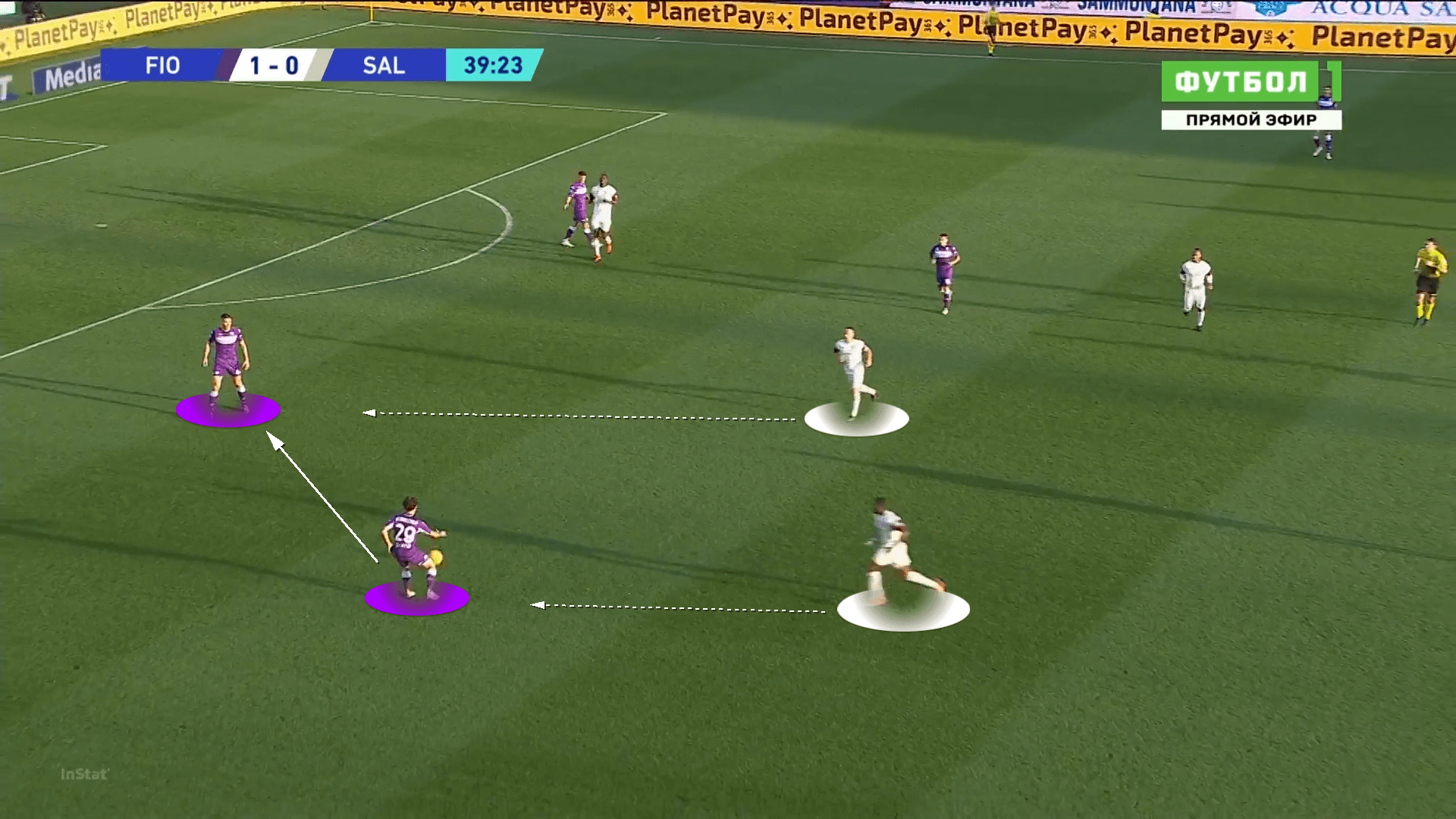 Now, Nikola Milenković can make an incisive forward pass into the middle third into Giacomo Bonaventura, who can play a quick flick forward to Odriozola who looks to push forward. What created the angle for Milenković pass was the position of Fiorentina’s fullback, who pins his marker and creates space for the open passing lane. 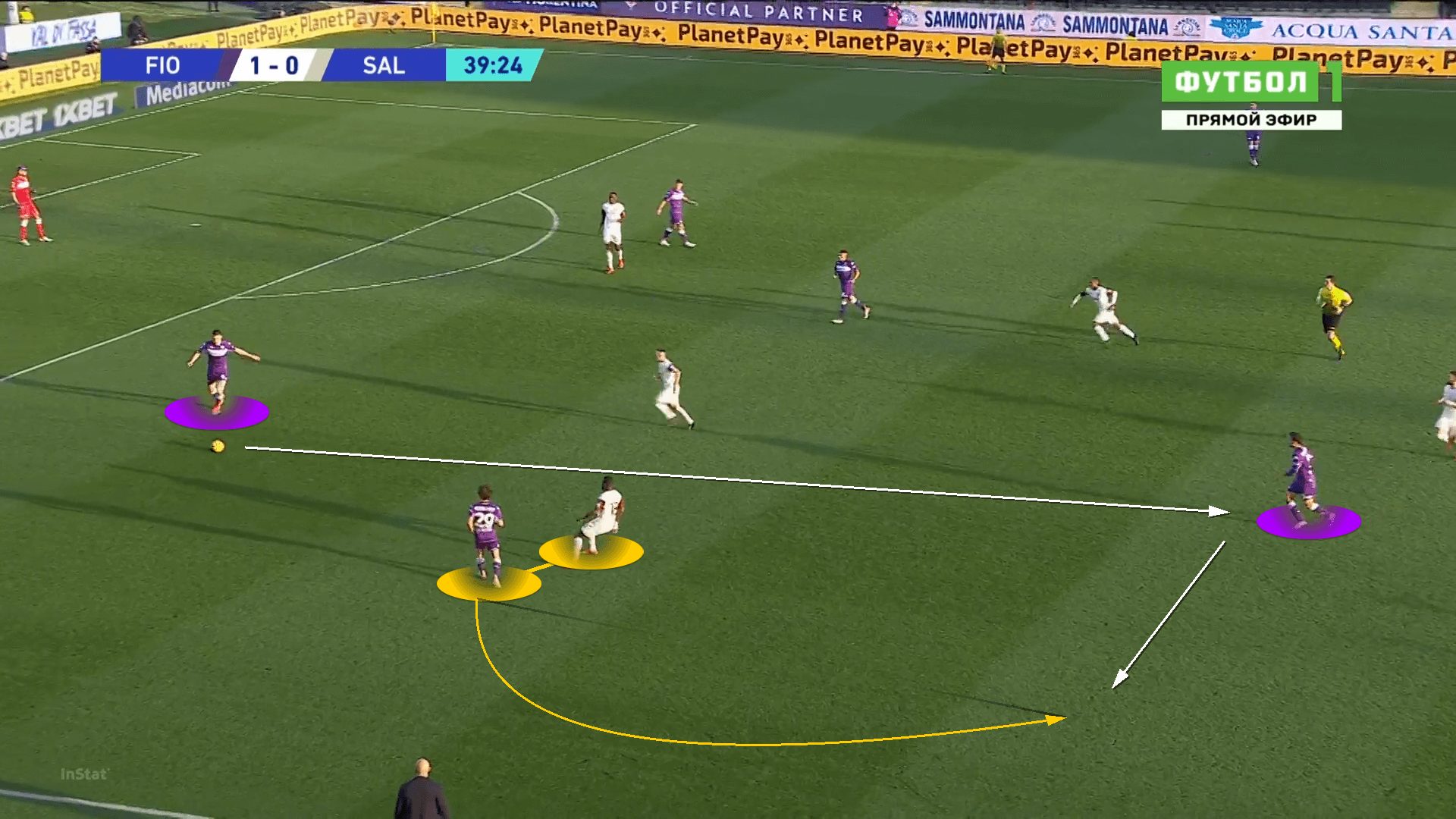 Another key theme that played a massive part in Fiorentina’s play was their use of countermovement to create space and mixed this well with their three-man triangular rotations out wide. Vincenzo Italiano grants his players freedom to take up any position within the triangle, as long as a position is occupied. During these scenarios, Fiorentina excelled during 3v3 matchups against Salernitana.

Here, Fiorentina attempted to build up out wide on the left side. Left-back Cristiano Biraghi is hugging the touchline, which allows winger Nicolás González to move slightly inwards, so they do not operate on the same vertical line. The central midfielder, Alfred Duncan, moves laterally to this side as a reference point. 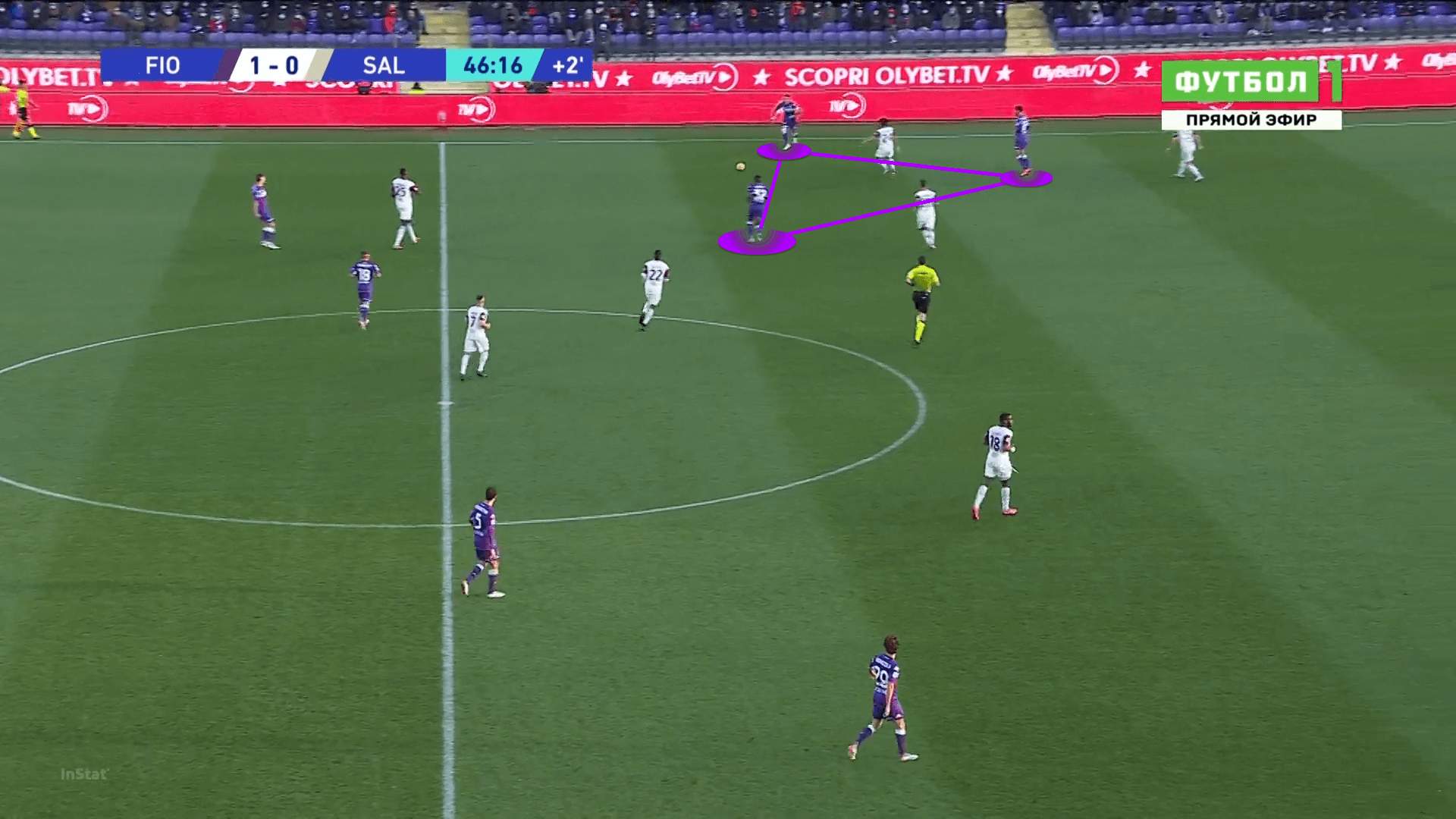 Cristiano Biraghi passes the ball to Alfred Duncan and makes a darting run in-between Salernitana’s two pressing players. As he makes this run, Duncan, now in possession, can flick the ball into his path and progress the ball forward. 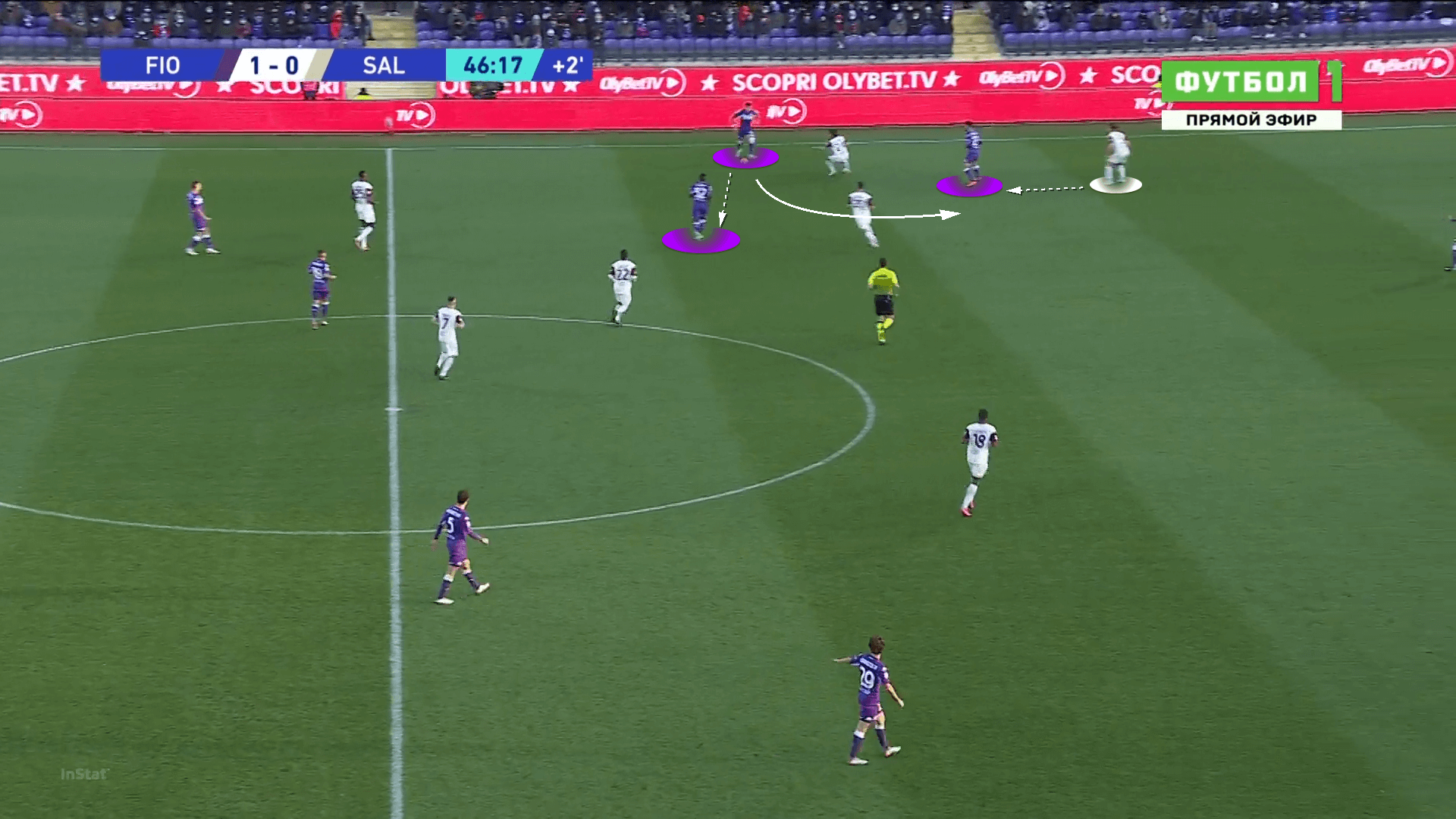 With the worst defence in the division, against a fierce attack of Nicolás González, José Callejón and Dušan Vlahović, it was quite clear that Salernitana’s goal was going to be quite vulnerable all afternoon long.

Out of possession, Salernitana made use of a 4-4-2 diamond with their intention, to press Fiorentina’s centre-backs with their two strikers and for their number at the tip of the diamond, to man-mark Fiorentina’s defensive midfielder Lucas Torreira. On the day, Salernitana’s biggest issue was how easily Fiorentina found openings, and this was because of a multitude of issues. First, the personal; Franck Ribery was operating a number ten, creating a front 3 with his two strikers In Front of him. The issue he presented was his lack of running and incorrect pressing angles, and because of this, Lucas Torreira was afforded too much space in the centre of the pitch.

Here, Fiorentina centre-back Igor Julio is in possession. Salernitana’s striker partnership was parallel to both opposition centre-backs, ready to press, and Franck Ribery was close to Torreira. 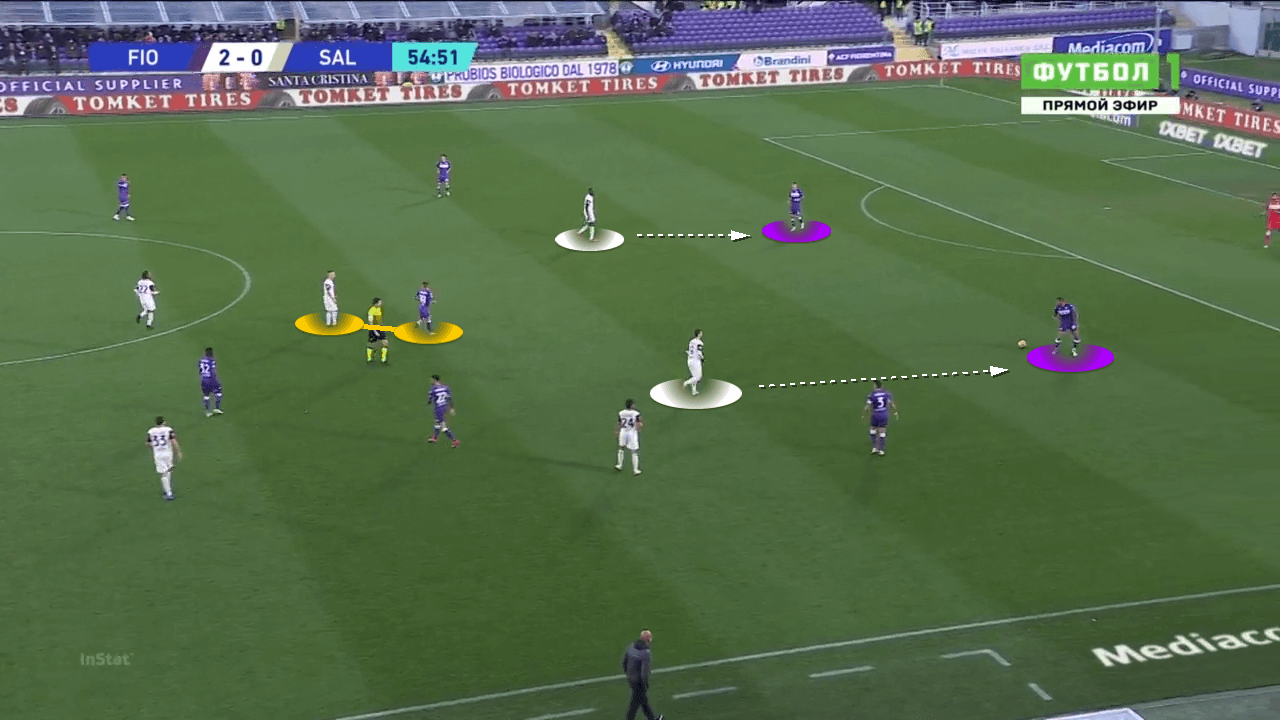 A few seconds pass, Lucas Torreira drops further back as a support option, but Franck Ribery does not decide to track his movement and gives him time and space to pick his pass. 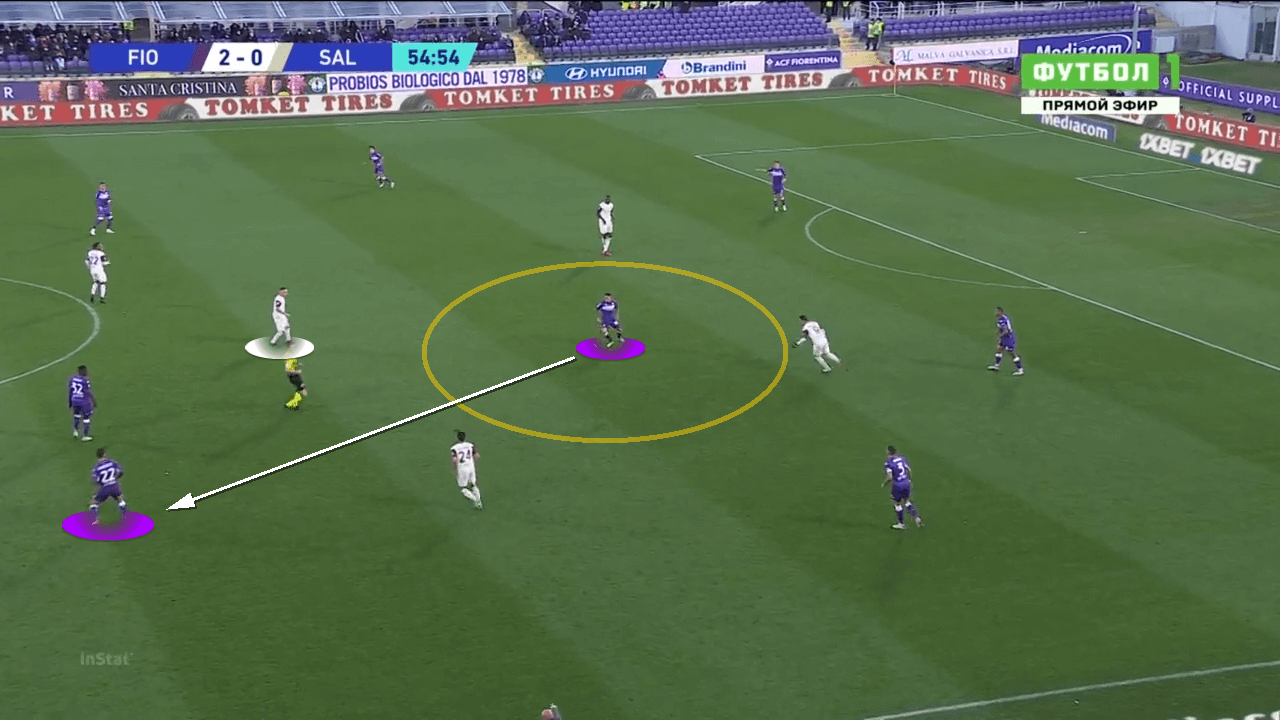 Ribery was a major contributor to Salernitana defensive issues, but tactically, the visitors did not present a good show of themselves. As stated, Salernitana employed a 4-4-2 diamond, with slight variations to nullify Fiorentina. To start, Salernitana full-backs were positioned high to create a layer of pressure and to press Fiorentina’s wide defenders, but their opposition’s wide combinations sliced through their press with ease. Salernitana made a tactical change and allow their wide central midfielders to press Fiorentina’s full-backs. Regardless of their defensive alteration, their press was still ineffective.

Here, Cristiano Biraghi is about to receive a pass from Igor Julio; while this is occurring, one of Salernitana wide midfielders is trying to close opposition space. 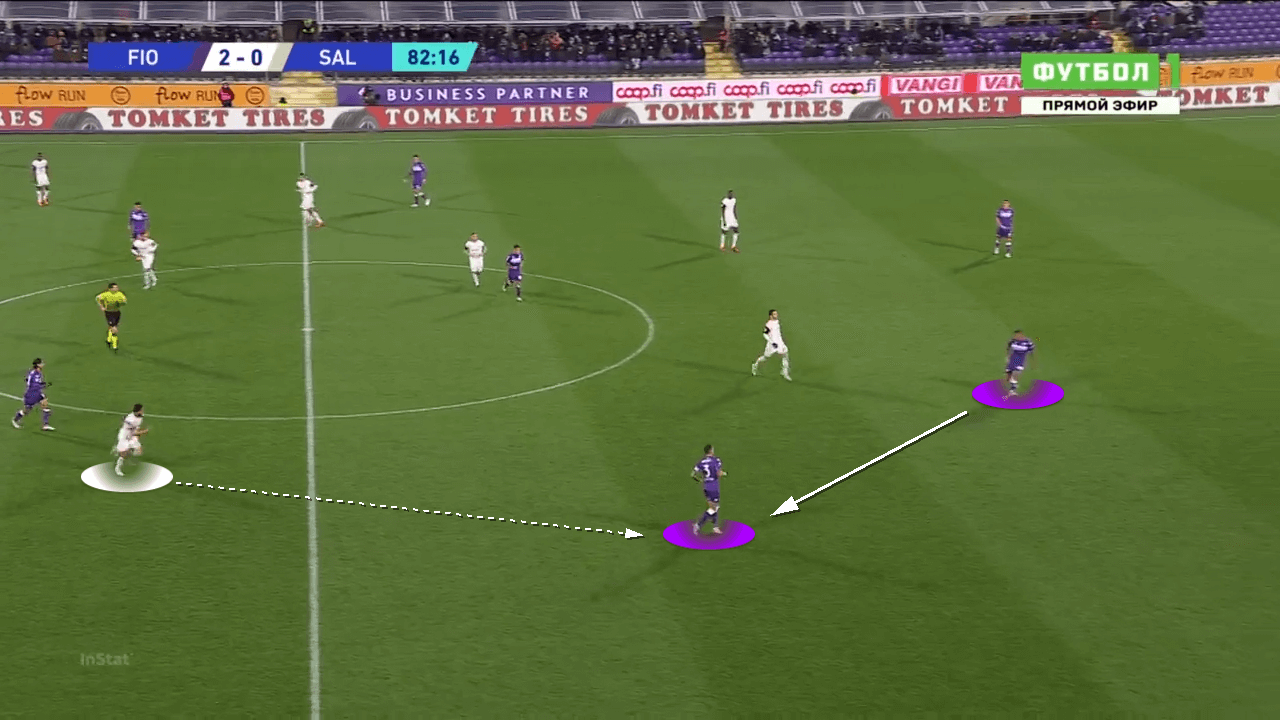 Cristiano Biraghi receives the ball and turns. Within the left half-space is Youssef Maleh, in open space. 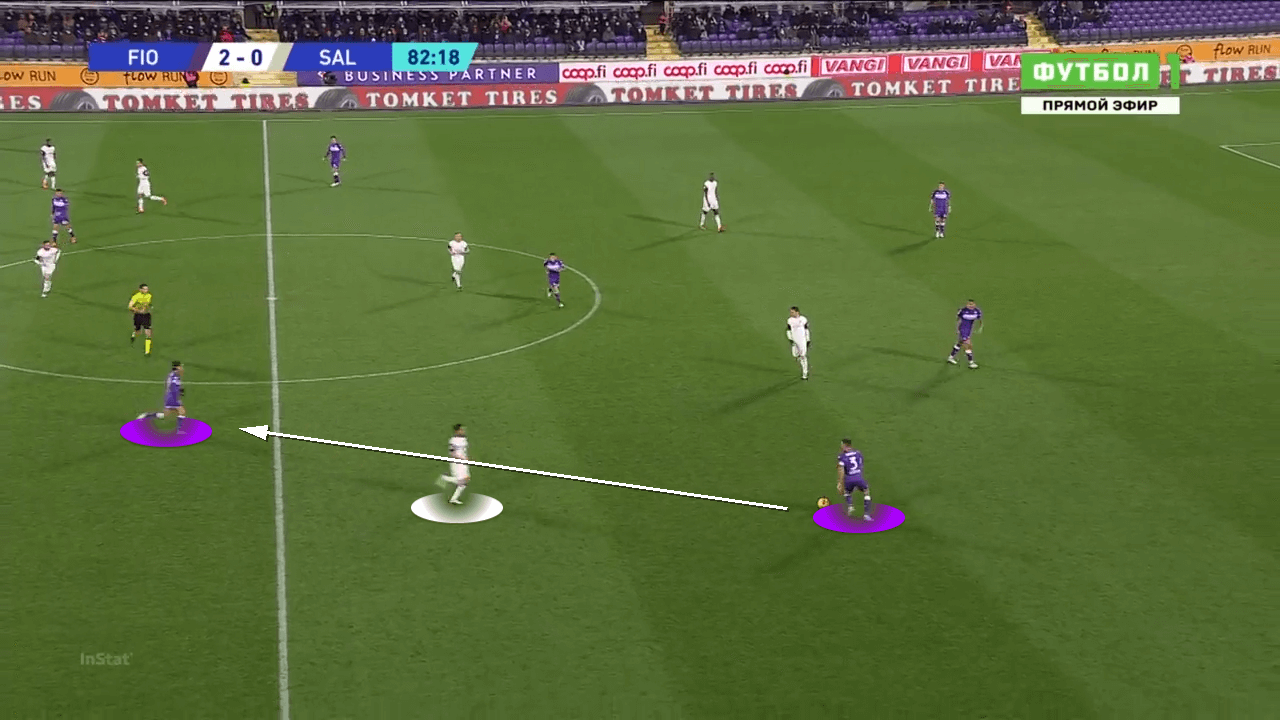 Once Youssef Maleh receives the ball and can quickly play pass out wide to substitute, Riccardo Sottil. 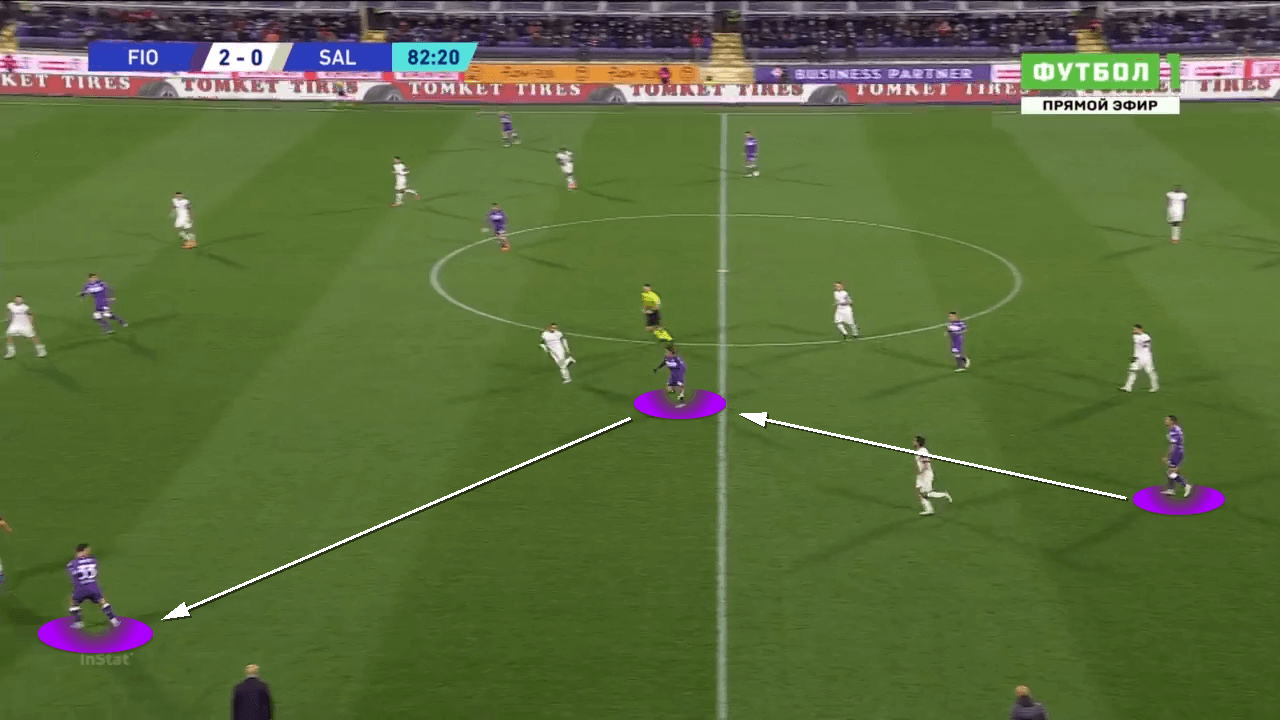 The role of Lucas Torreira

The Uruguayan and former Arsenal midfielder, Lucas Torreira, was vital to Fiorentina’s wonderful display on that afternoon and facilitated play which contributed to Vincenzo Italiano tactics. Lucas Torreira is well known for this reading of the game, which he uses to great effect when stealing the ball of opposition players, besides tackling and defensive ability. While all these qualities were on display against Salernitana, the South American midfielder showcased his tactical nous and technical ability.

During passages of play as Fiorentina were build up during the opening phase, Lucas Torriera excelled by moving laterally across the pitch and constantly making himself available as a supporting passing option for teammates. Lucas Torreira also contributed to play by creating an overload in midfield and creating numerical superiority in his team’s favour. The attacking talent and defensive solidly of Fiorentina have been getting a large amount of credit and rightfully so but, a certain Lucas Torreira deserves praise as well.

Fiorentina was once perceived as a team of yesteryear, as their supremacy and prestige have faded away as years gone by. The Purples have not featured in European football since 2016, and their mix of managers has created a sense of chaos within the club. But, at the dawn of the 2021/22 Serie A season, Fiorentina’s newly appointed manager Vincenzo Italiano has shown things might be different in Florence. Fiorentina is smooth, patient and most of all makes use of all the talent they possess. On the other side of this fixture—Salernitana, Serie A’s new boys, under manager Stefano Colantuono. The newly promoted side sits bottom with the worst goal difference and most goals conceded so far to this campaign. During this fixture, Fiorentina showcased their class, but Salernitana’s defensive display is not top flight-worthy, but time is on their side. As for Fiorentina, a top-four finish looks unlikely with the form of the topsides in Italy, but European football for the first time in years will showcase their progress.