UEFA Women’s EURO 2022: The battle for control between England and Sweden – tactical preview

After a dominant performance over Belgium in the quarter-finals, Sweden will go to Sheffield to face England for a spot in the Euro 2022 final. While the Lionesses had a difficult time against Spain, grabbing the winner in extra-time, they have been quite dominant throughout the tournament. On the other hand, the Blågult have consistently performed well in their matches, including the quarter-final. Despite only scoring one goal to defeat Belgium, Peter Gerhardsson’s side had a mind-blowing 6.07 xG figure.

While both sides try to be in control of the match, they tend to do so in completely opposite ways, as we will see in this analysis. The semi-final on Tuesday will prove to be a fascinating tactical battle between two world-class managers. In this tactical preview, we will not only identify the tactics used by both England and Sweden but also how they will interact with each other. In addition to identifying key tactical points, this analysis will highlight a few key players that could make the difference, for better or worse.

Before examining key tactical points, it is worth looking at how the two teams will line up. Sarina Wiegman has been extremely consistent with her starting eleven, and the same should be expected on Tuesday. In a 4-2-3-1, Mary Earps will be in goal behind Lucy Bronze, Millie Bright, Leah Williamson, and Rachel Daly. While Daly, the left-back, struggled to contain Athenea Del Castillo and was subbed off on Wednesday, she should still expect to be selected in the semi-final. Ahead of the double pivot formed by Georgia Stanway and Keira Walsh, Bethany Mead, Francesca Kirby, Lauren Hemp, and Ellen White make up the front four.

Contrastingly, Gerhardsson has not repeated a starting lineup yet. Not only has the 62-year-old manager constantly rotated personnel, depending on the opposition and strategy, but he has also changed the formation a couple of times. While they began the tournament in a 3-4-2-1, they have changed to a 4-2-3-1, and then to a 4-4-2. Gerhardsson seems to have liked the 4-4-2 though and repeated it in the quarter-final. For reasons we will identify in this analysis, he should be expected to repeat it once again.

Due to three players testing positive for COVID-19, it is a bit easier to predict Sweden’s starting XI. As PSG’s right-back Hanna Glas is one of them, Amanda Ilestedt will be the right-back. Magdalena Eriksson and Linda Sembrant will form the centre-back pairing with Amanda Nildén as the left-back. Ahead of them, Nathalie Bjorn and Filippa Angeldahl will be the double pivot flanked by Johanna Rytting Kaneryd and Fridolina Rolfö. Up top, Kosovare Asllani will be the false nine alongside Arsenal centre-forward Stina Blackstenius. In goal, of course, Hedvig Lindahl will start.

One thing is clear from Sweden’s 6.07–0.15 xG over Belgium, they like to be in control of the match. This control, however, is not through dominating possession, but rather by dominating territory. Despite being clearly better than Belgium, they only had 51.84% of possession. Through their average positions, though, we are able to identify they spent the majority of the match in the opposition’s half. This is largely due to their aggressive high press, illustrated by their 7.66 average PPDA.

With the ball, they are vertical and like to play in transition, with 11.05% of their passes in the tournament being long. Furthermore, their 155.5 forward passes per 90 are higher than their 137.5 lateral passes per 90. 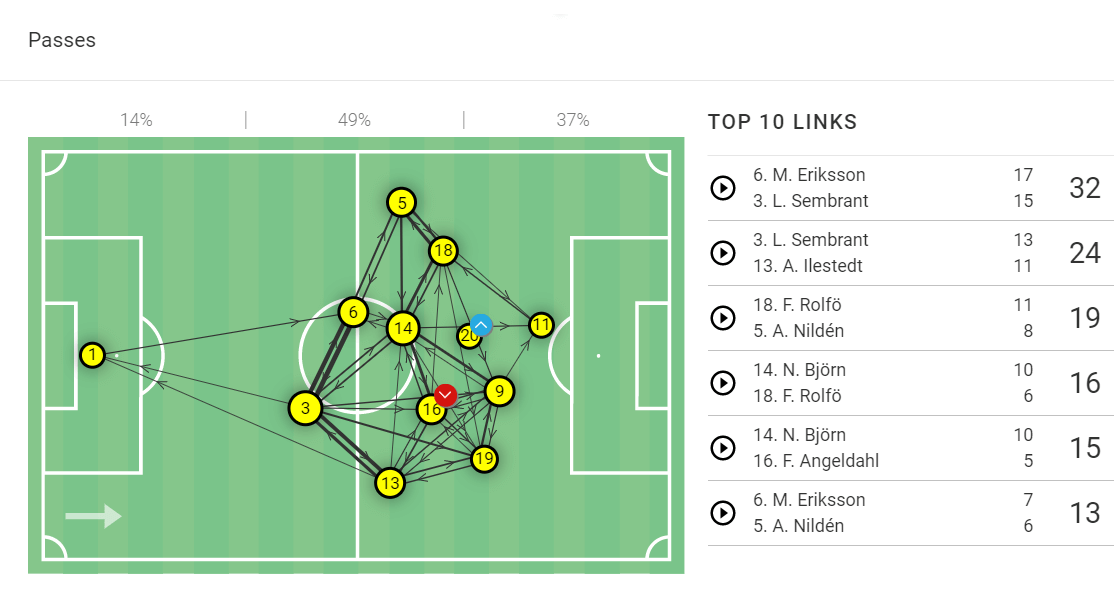 In possession, the Blågult like to increase the pitch by maximising width. This width is maintained by their fullbacks, as seen below. Meanwhile, the wingers will drift inside to overload the midfield and operate in the half-spaces. In front of the two centre-backs, the double pivot is formed with attackers fluctuating ahead of them. 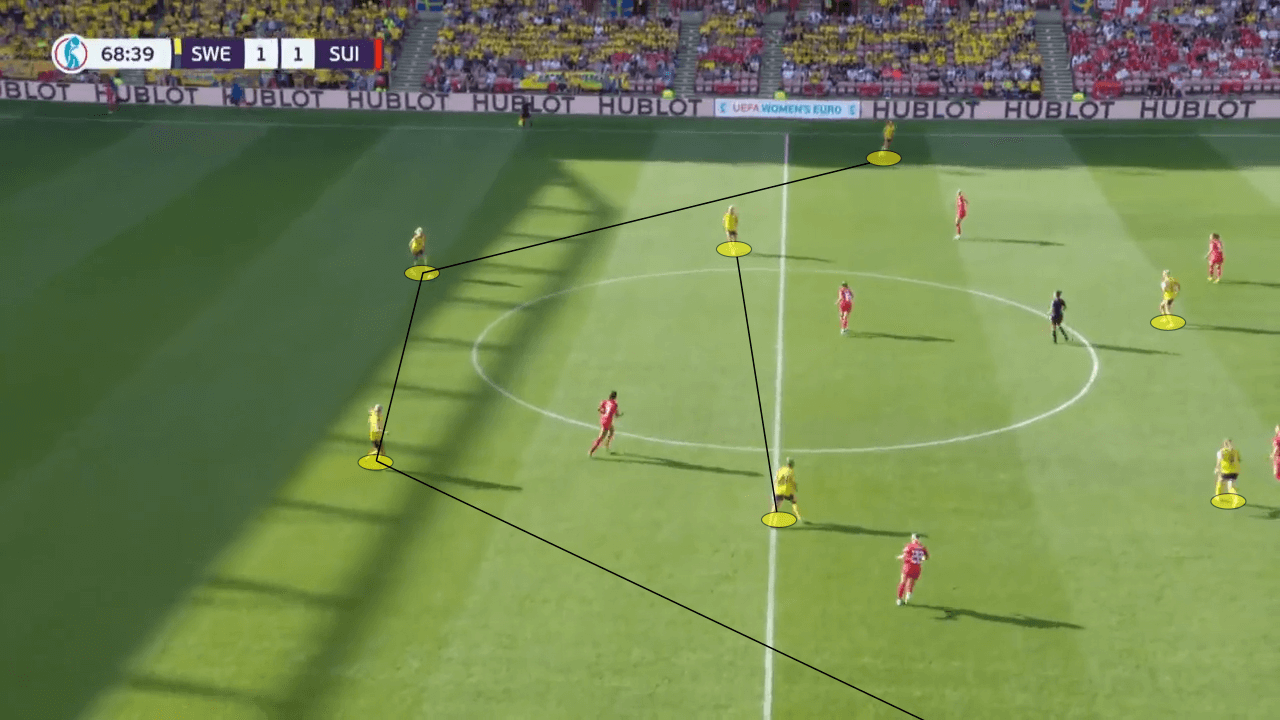 Constant rotation is a key principle of this Swedish side. As they are constantly looking to break lines and be direct, it is important to have players attacking the space. This space is generated by rotations, as when players move, space is vacated, and the defensive organisation is manipulated. 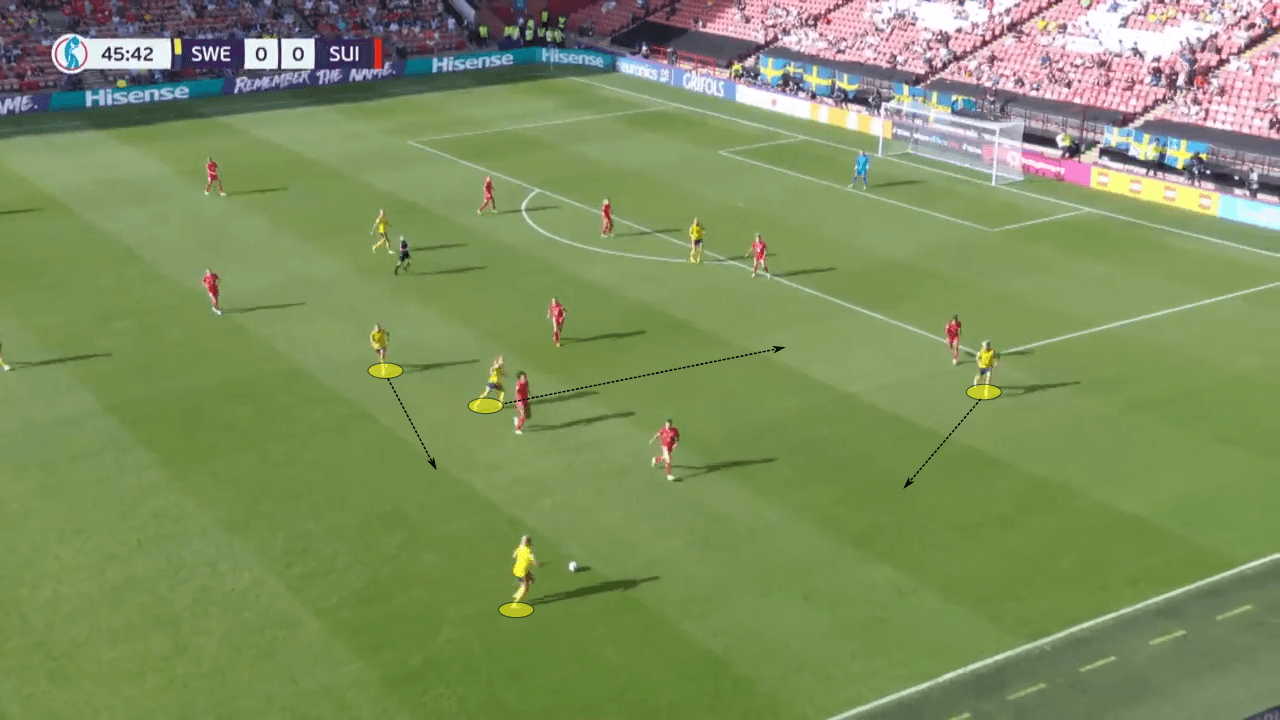 Lastly, in the organisation below, we are able to identify a few more tactical points. First, they mostly attack through the wings, exploiting numerical advantage and the dynamic created between the half-space and the wing channel. This advantage is created by the two wide players, who are constantly rotating between themselves, and the support from the central players. Asllani is a creative reference, and as seen below, she will drop in to get involved in the earlier stages of possession. 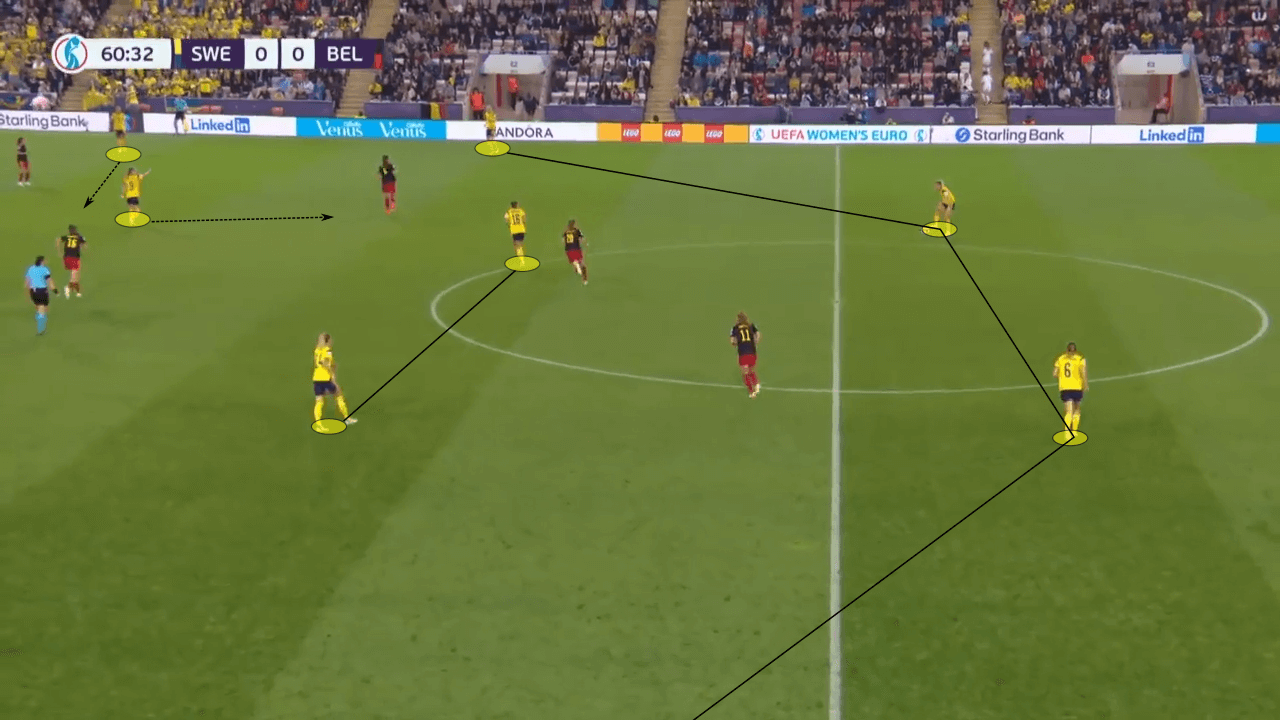 While Sweden aim to control the game by suffocating the opposition in their own half, the Lionesses try to do so in a different way. Aside from their match against Spain, where they had no answer to La Roja’s press, they have often dominated possession. With an average of 59.76% possession, they are also quite dynamic in their work with the ball. Unlike Spain, who like to relentlessly retain possession and carefully advance through the thirds, England can be very vertical at times as seen through their 91.75 progressive passes per 90. The difference lies in finding a balance and knowing when to retain possession and when to be direct.

Structurally, they are strategically organised to exploit the spaces in the best way possible. Wiegman’s fullbacks tend to stay narrow and operate in the half-spaces, while the wingers will maximise the width. By having a line of four up top, they are able to pin five opposition defenders and have a 5v4 superiority in the middle third. 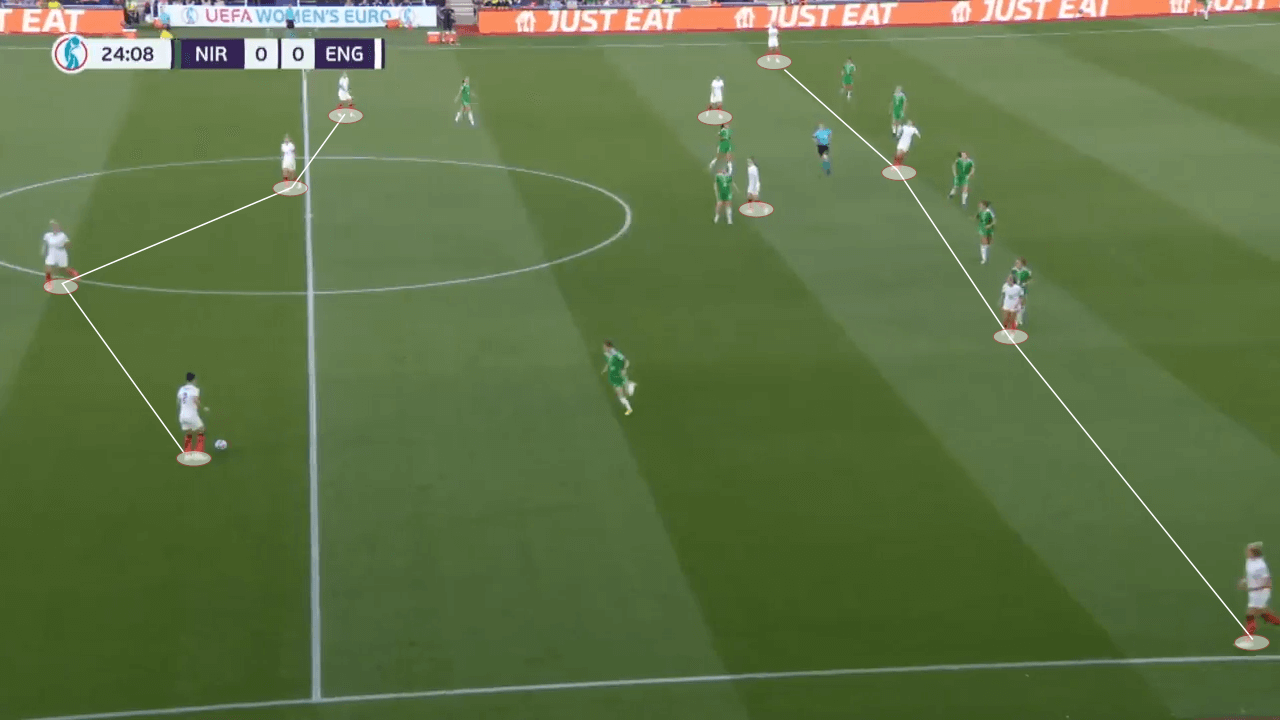 Similar to Sweden, England are in constant movement. Not in an overwhelming manner, players will constantly support possession. On the contrary, they are very organised structurally and will rotate in and out of spaces with the aim of maintaining the opposition’s defensive organisation stretched. In the instance below, Kirby immediately vacates her position after passing it wide. 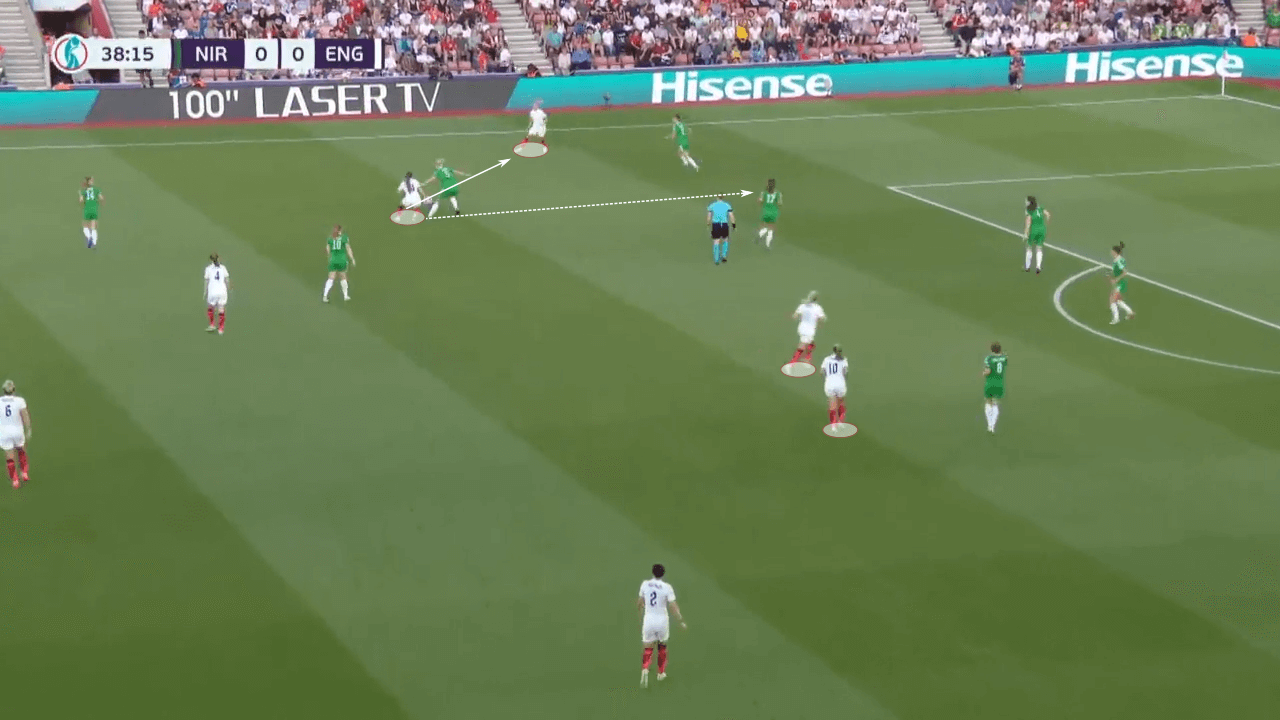 After doing so, two players will check in from inside. The wide player plays it to one of them, and she makes a first-time through pass to Kirby, who kept her run. 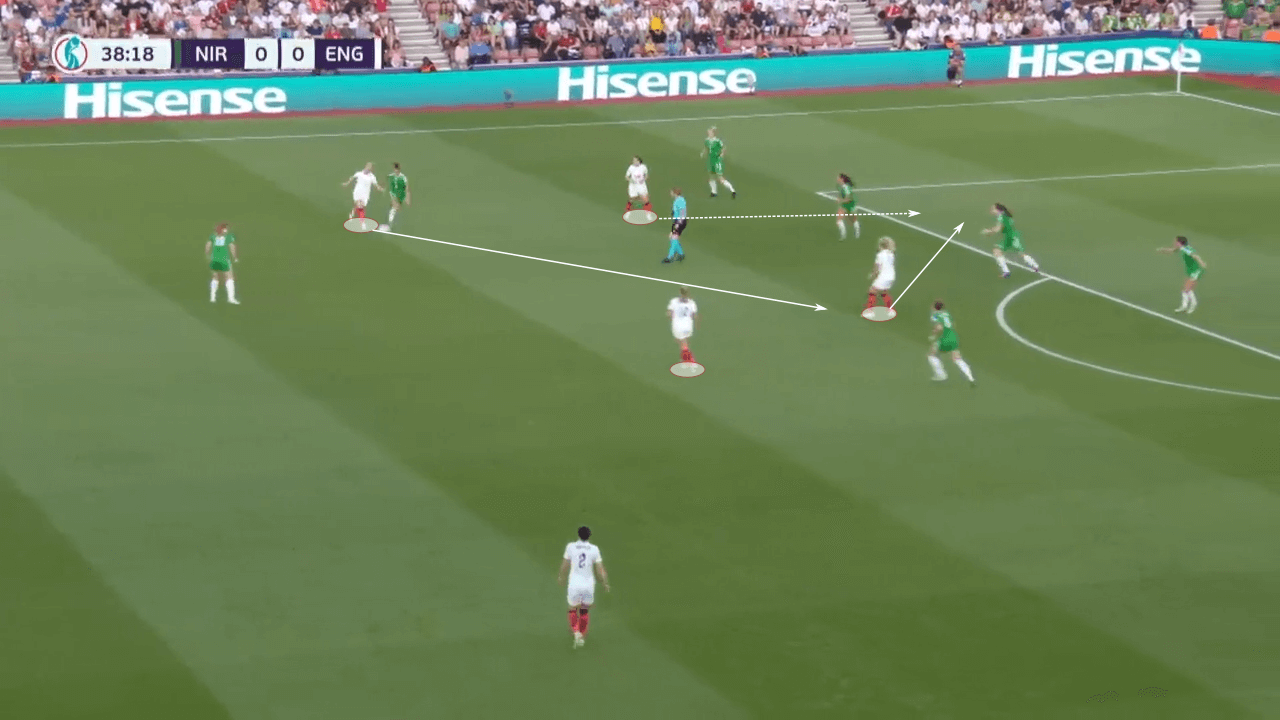 Both teams will attempt to control the match in opposite ways, and obviously, only one will be successful, at least for the most part. The deciding factor will most likely be Sweden’s high press, as its success will dictate which way the match goes. As noted, Gerhardsson’s high press is a significant factor in how they attack, and as seen against Spain, if conducted correctly, a high press can nullify the Lionesses. If not, Sweden’s high defensive line will be dangerously exposed.

Sweden’s recovery map against Switzerland can be used to illustrate just how relentless they can be with their high press. Of their 115 recoveries in the match, 30 were in the final third. 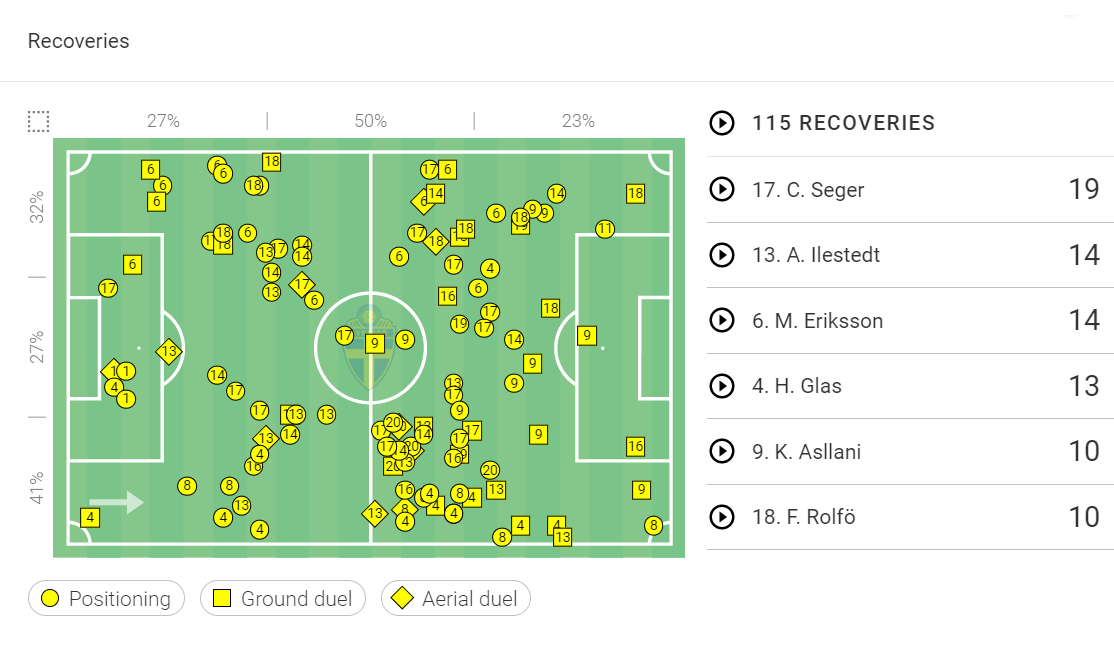 The Blågult’s aggressive press is conducted in a hybrid zonal and man-oriented manner. Initially, they will begin in a 4-2-4 shape with the two centre-forwards leading the way. Against England, the same structure should be expected as Sweden’s midfield duo will mirror England’s initial double pivot. 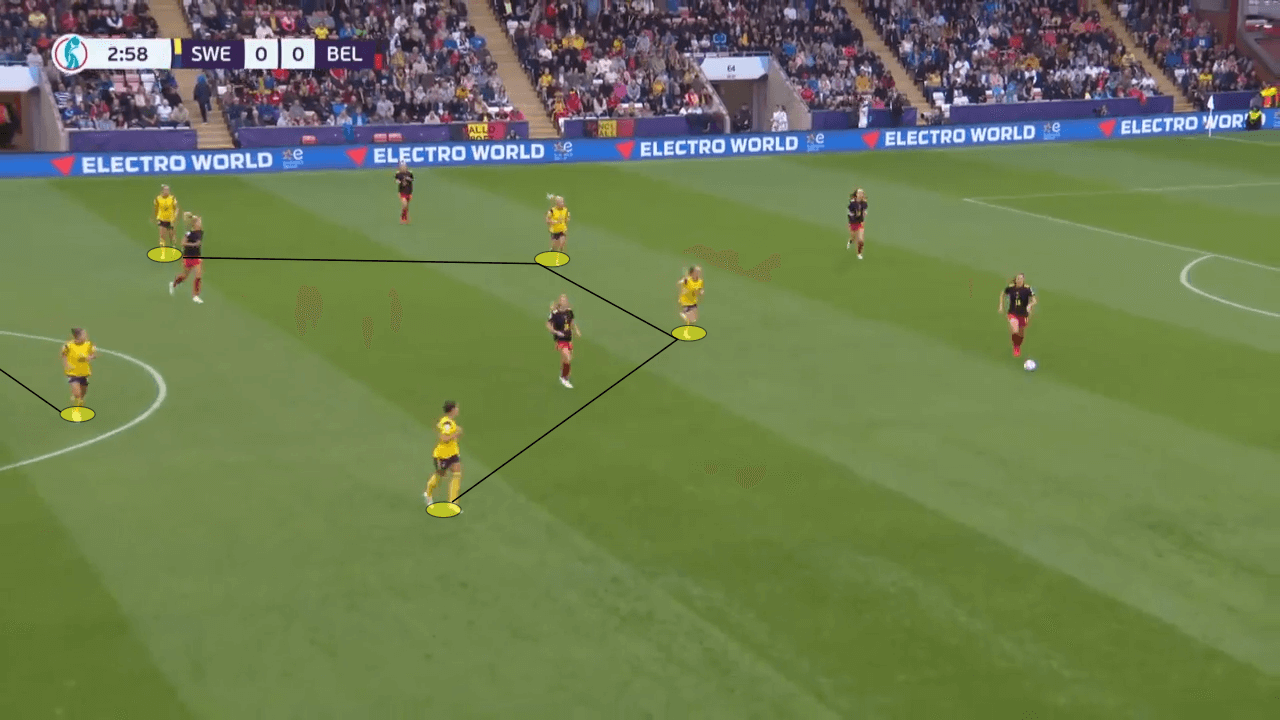 This press is tremendously aggressive, as they look to match the opposition’s numbers in the build-up. The two centre-forwards will push up on the centre-backs while the wingers advance on the fullbacks. 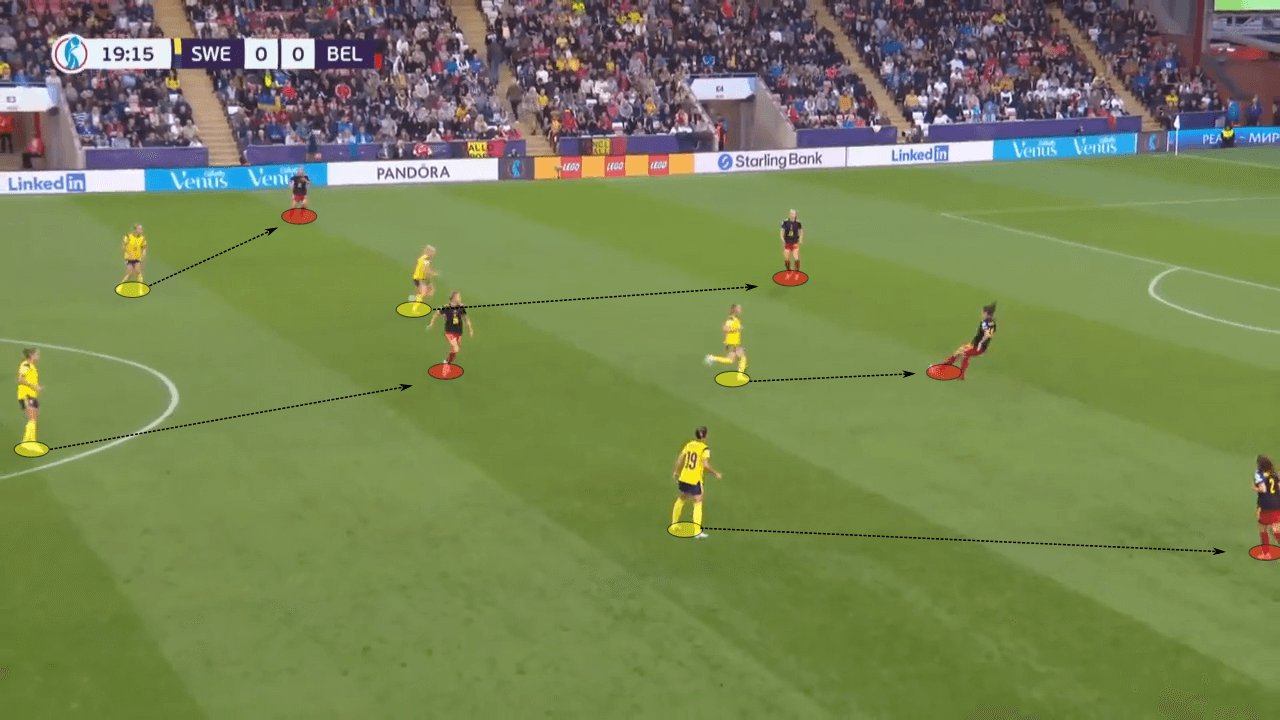 At times, one of the centre-forwards will allow the centre-back time on the ball in order to keep the playmaker from receiving the ball. This must be done in an extremely coordinated way as, if cover is not provided at the correct time, they can be easily played through. 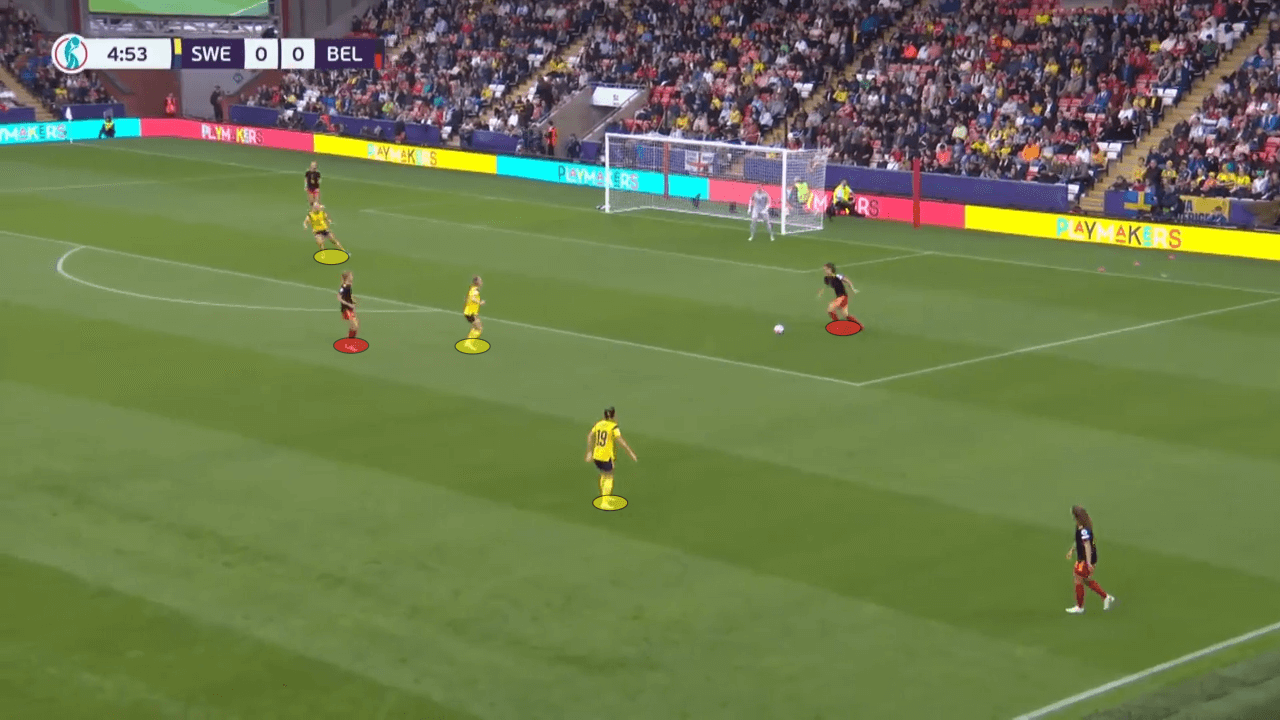 When the centre-forward decides to step up, one of the midfielders will push up to close down the opposition’s number six. As we will see, England’s Walsh tends to be a reference in the build-up, so extra care will be needed with her. 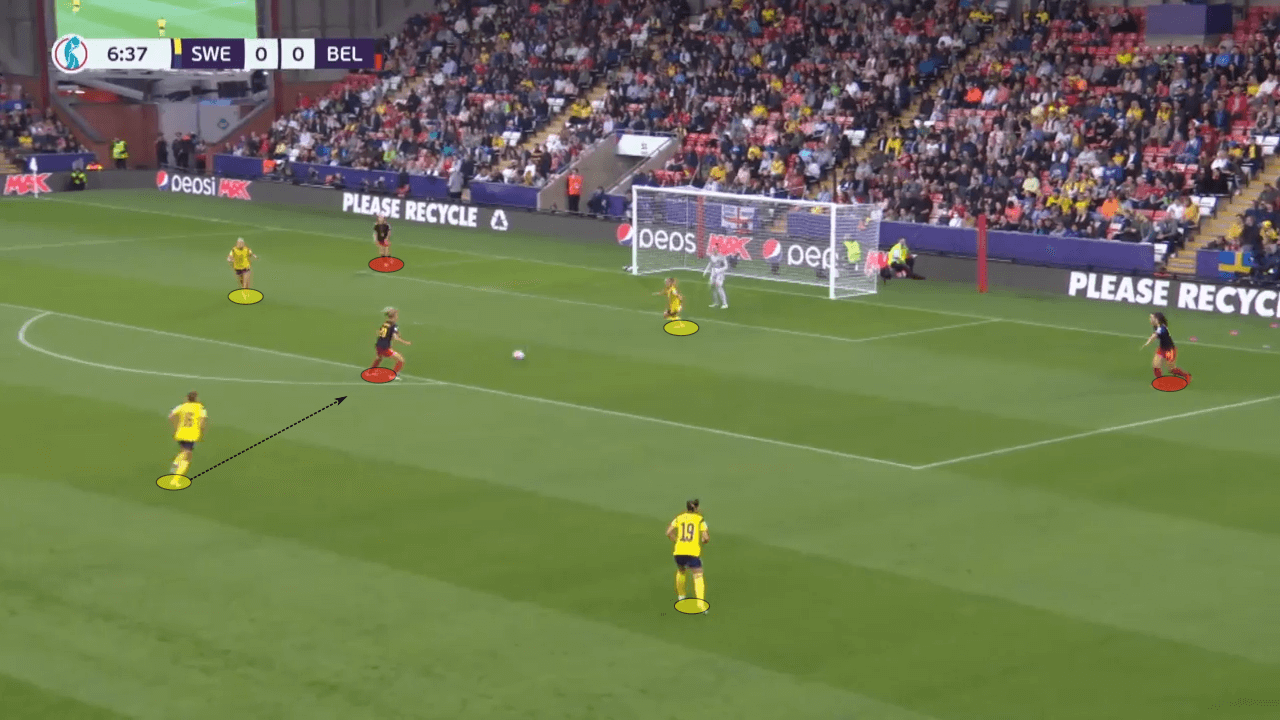 England build up with their backline stretched across the third. While the goalkeeper will join in between the centre-backs, Walsh tends to drop as a single pivot. Sweden must be very careful with how they conduct their press, as not only will Walsh cause trouble, but other players will drop in from further up the pitch. If an aggressive press is deployed, it must be airtight. 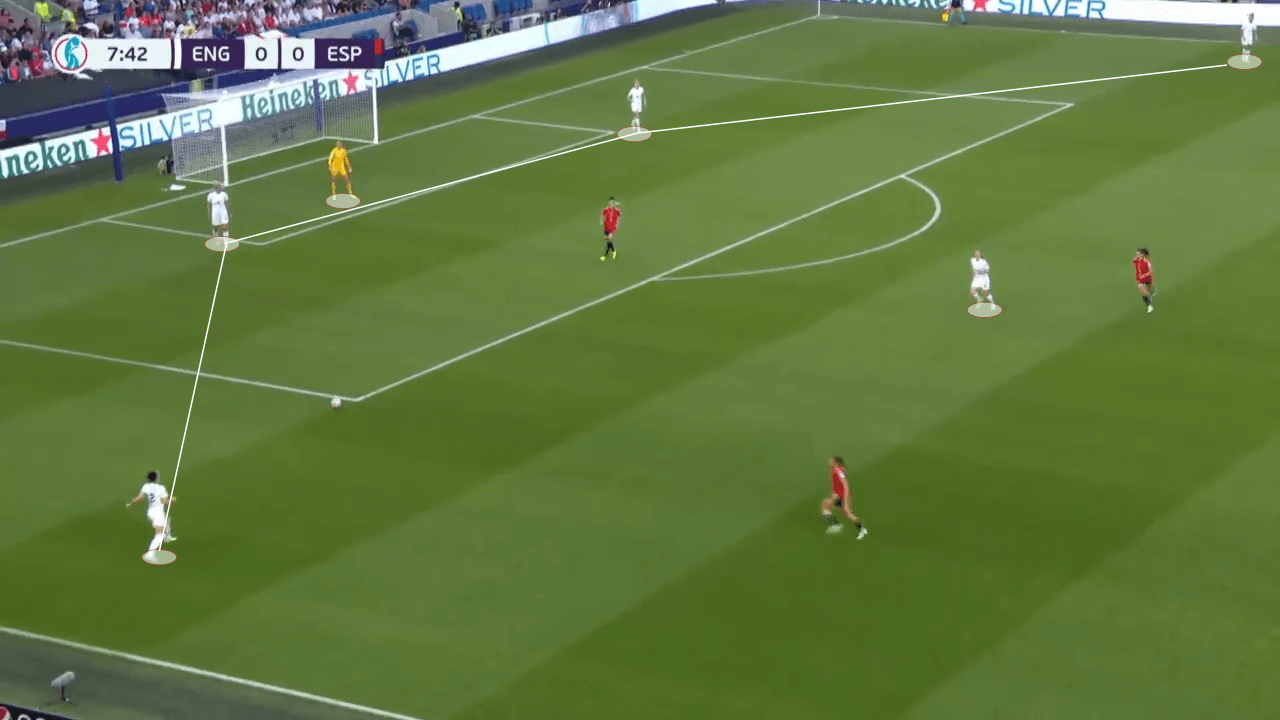 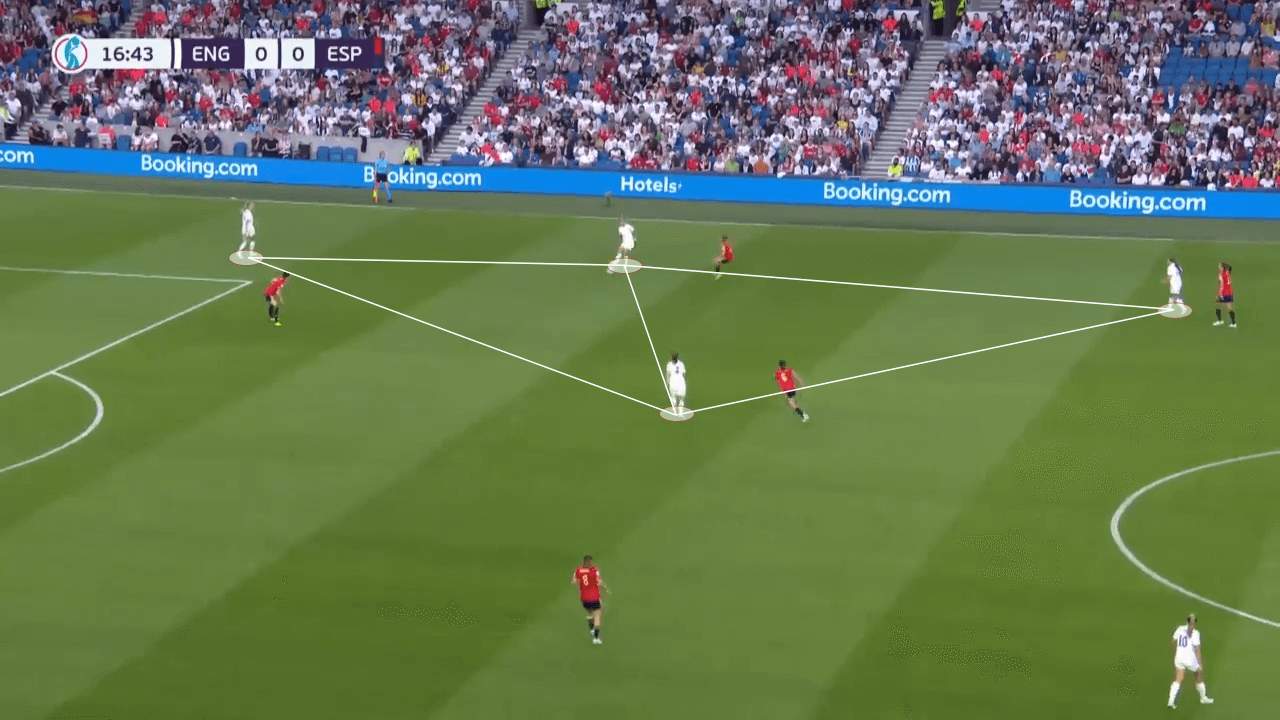 There are a few players that, due to their abilities and roles, will prove to be decisive. First, for Sweden, Eriksson’s quality on the ball will continue to dictate their success in possession. Chelsea’s ball-playing defender has the 10th most progressive passes in the tournament, and her role in breaking lines and initiating possession will be key.

Further up the pitch, Asllani’s creativity is the main factor behind Sweden’s successful attack. The Real Madrid forward has four goal involvements in the tournament, and her ability to create in the final third is crucial to their success. She is constantly able to find gaps outside the box to receive the ball before making the final pass. 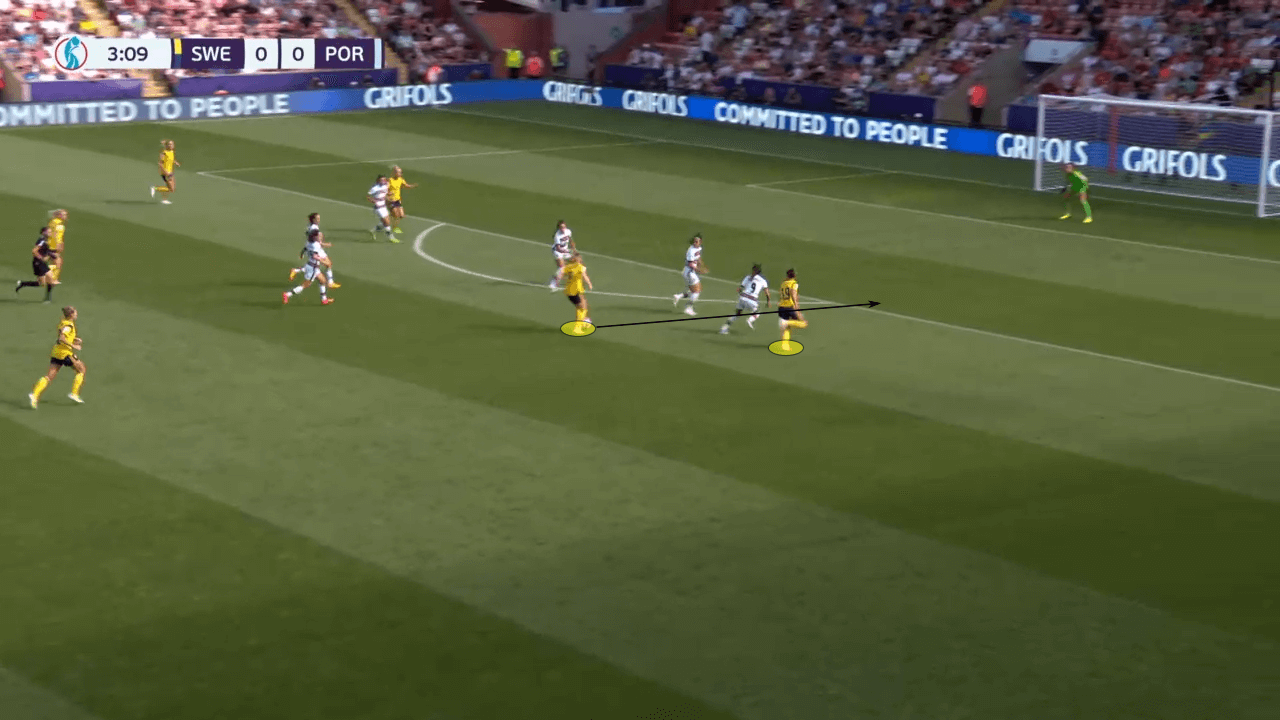 In the instance below, for example, she is able to receive a pass just in front of the opposition backline. Beautifully, she performs a first-time backheel pass to leave her teammate in front of the goal. 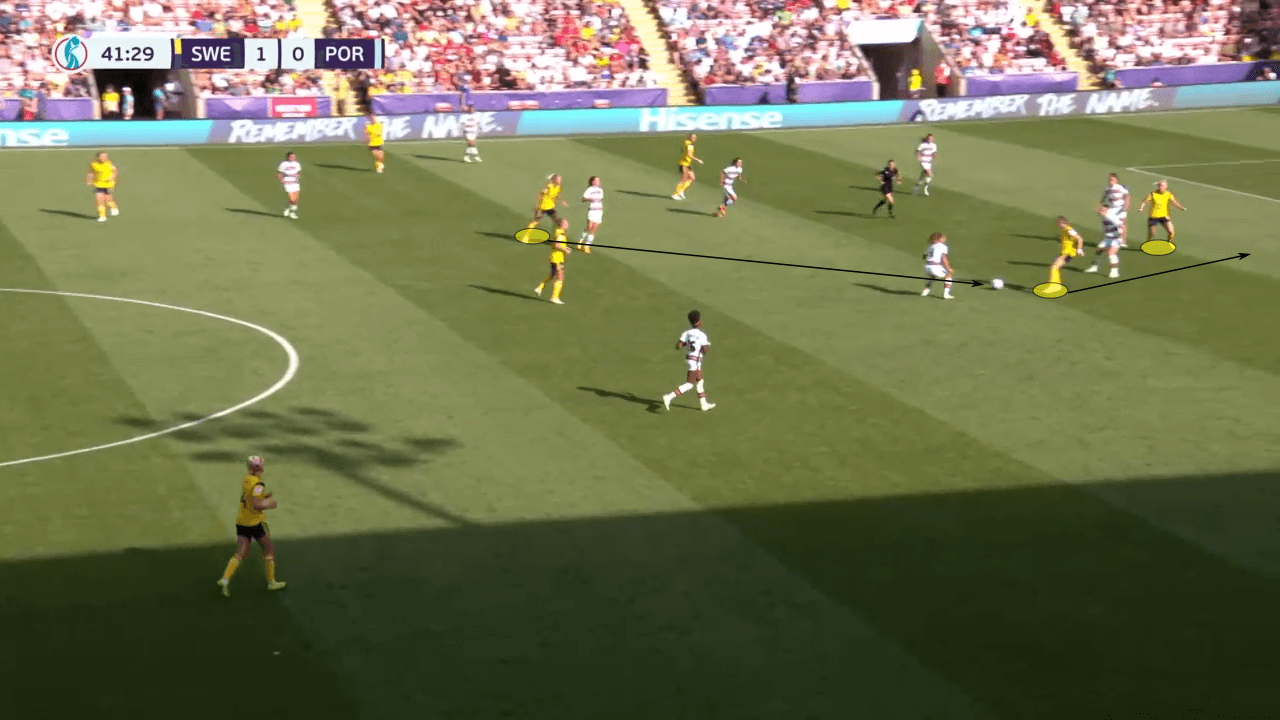 While she is certainly one of Sweden’s most important players, especially in the attack, there are many others who play significant roles. Both teams rely on collective force rather than individual brilliance. Guided by two tactical masterminds, they have effective tactical systems that enhance each player’s ability. Of course, though, there are certain players within these systems that are incredibly important to its success. In construction, Williamson and Walsh are the two for England.

As one of the centre-backs, the Arsenal defender Williamson plays a significant role in the build-up. Against Northern Ireland, for instance, she completed an incredible 113 passes from 125 attempts. Williamson is an individual symbol of England’s overall strategy in possession. As noted, they are dynamic and versatile with their passing behaviour. Similarly, Williamson is able to perform all kinds of passes, as seen below, making her an important tool with the ball. 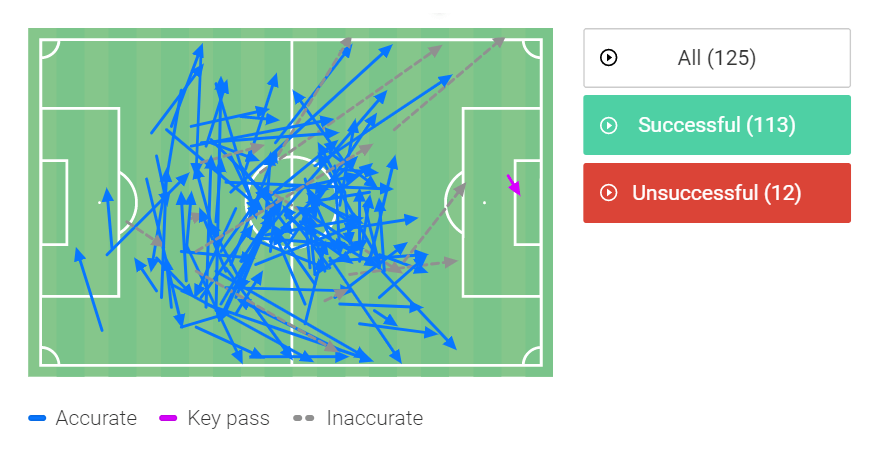 Finally, Walsh’s passing performance against Norway demonstrates just how important she is as well. As the single pivot, she is the most important piece in the build-up, and as we have seen, that phase of the game will be incredibly decisive in this match. 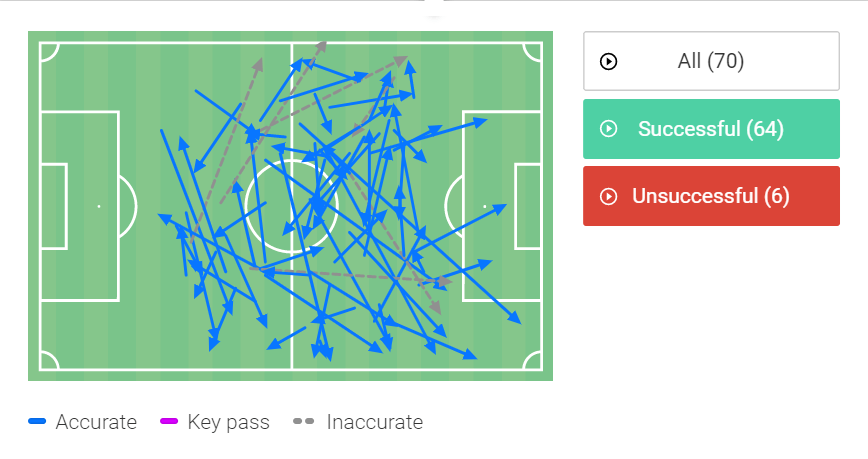 The semi-final between England and Sweden will be a fascinating tactical battle between two brilliant managers. At home, the pressure will be on the Lionesses to secure a spot in the final and win their first-ever European Championship. On the other hand, Gerhardsson’s side will come in tremendous form to Sheffield in an attempt to reach the Euro 2022 final.

With two opposite ideas of control, the match’s plot will be a result of Sweden’s high press and its success. Additionally, the performance of a few key players will be one of the biggest factors in the outcome of this tactical clash. On Tuesday, football fans all around the world will be able to tune into a mouth-watering battle.