After Inter Milan‘s 2-1 win over Bayer Leverkusen and Shakhtar Donetsk‘s convincing 4-1 win over Basel, the Italian and Ukrainian teams met in the UEFA Europa League semi-final to contest a spot in the final against Sevilla. This match was the first between the two sides since Inter Milan beat Shakhtar Donetsk 3-1 on aggregate in the third round of Champions League qualification back in 2005.

In this tactical analysis, I’ll provide an analysis of the tactics used by Antonio Conte and Luís Castro which led to a 5-0 win for Inter Milan.

Shakhtar Donetsk lined up in a 4-1-4-1. Andriy Pyatov captained the side in goal. Mykola Matviyenko and Dodô played as full-backs. Davit Khocholava and Serhiy Kryvtsov played as the two centre-backs. Taras Stepanenko played as the holding midfielder behind Marcos Antônio and Alan Patrick, who were flanked by Taison and Marlos. Júnior Moraes played as the lone centre forward. 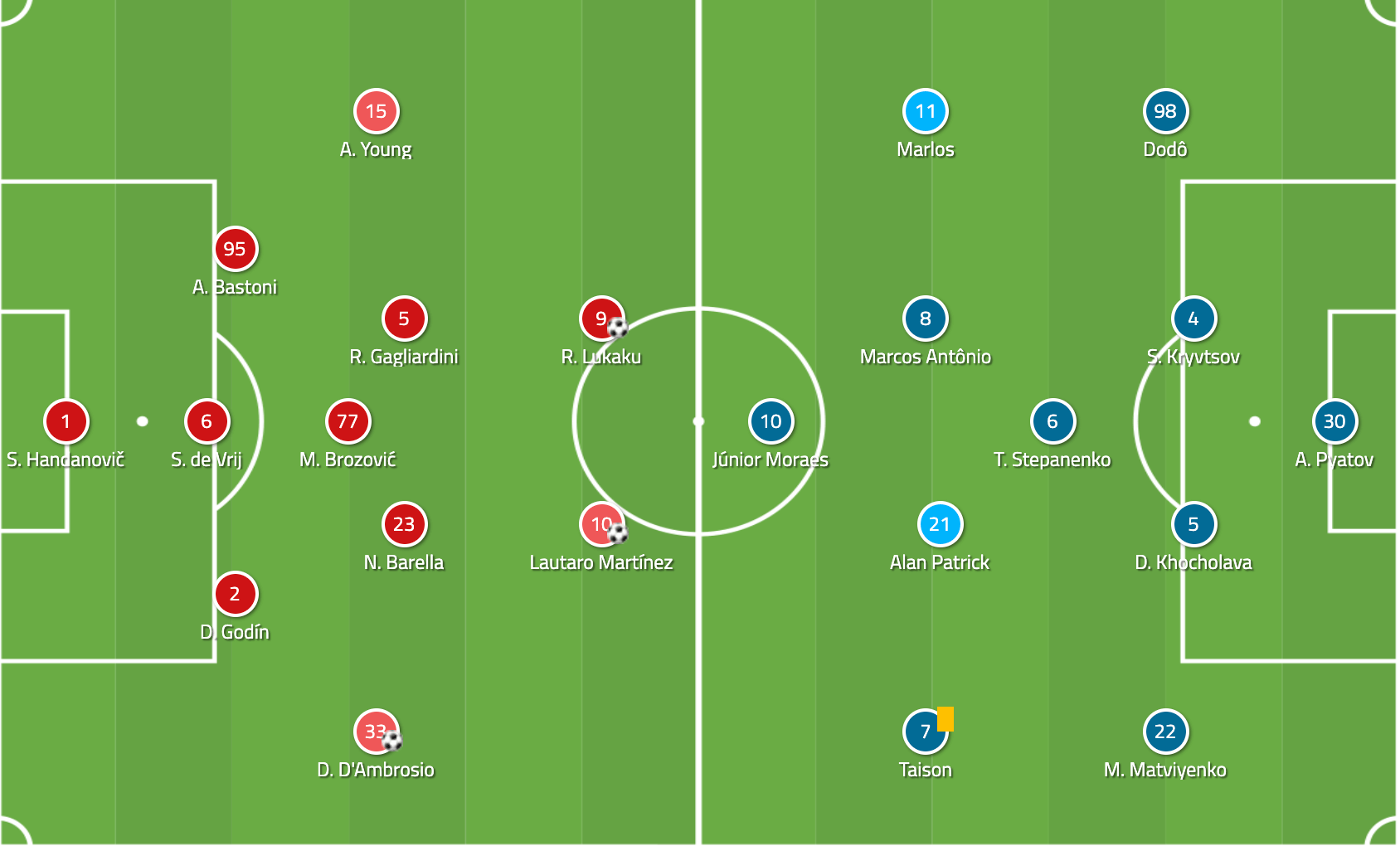 When Shakhtar Donetsk had the ball, Inter Milan would stay in their 5-3-2 and not press until the ball was played out wide to Dôdo or Matviyenko. When the ball was played to the right, Young would jump out to press. When the ball was played to the left, Barella would press while D’Ambrosio would jump out to ensure Barella was not bypassed. Regarding the centre, Martínez and Lukaku were responsible for pressing Shakhar Donetsk’s centre-backs, while Inter went man-to-man in the midfield, with Brozović stepping out to mark Stepanenko, who would occasionally drop to become a third centre-back. When the goalkeeper Pyatov was on the ball, he tended to play to the full-backs more often than to the centre-backs. In the diagram pictured below, we can see the responsibilities of the Inter players during Shakhtar Donetsk’s build-up phase. 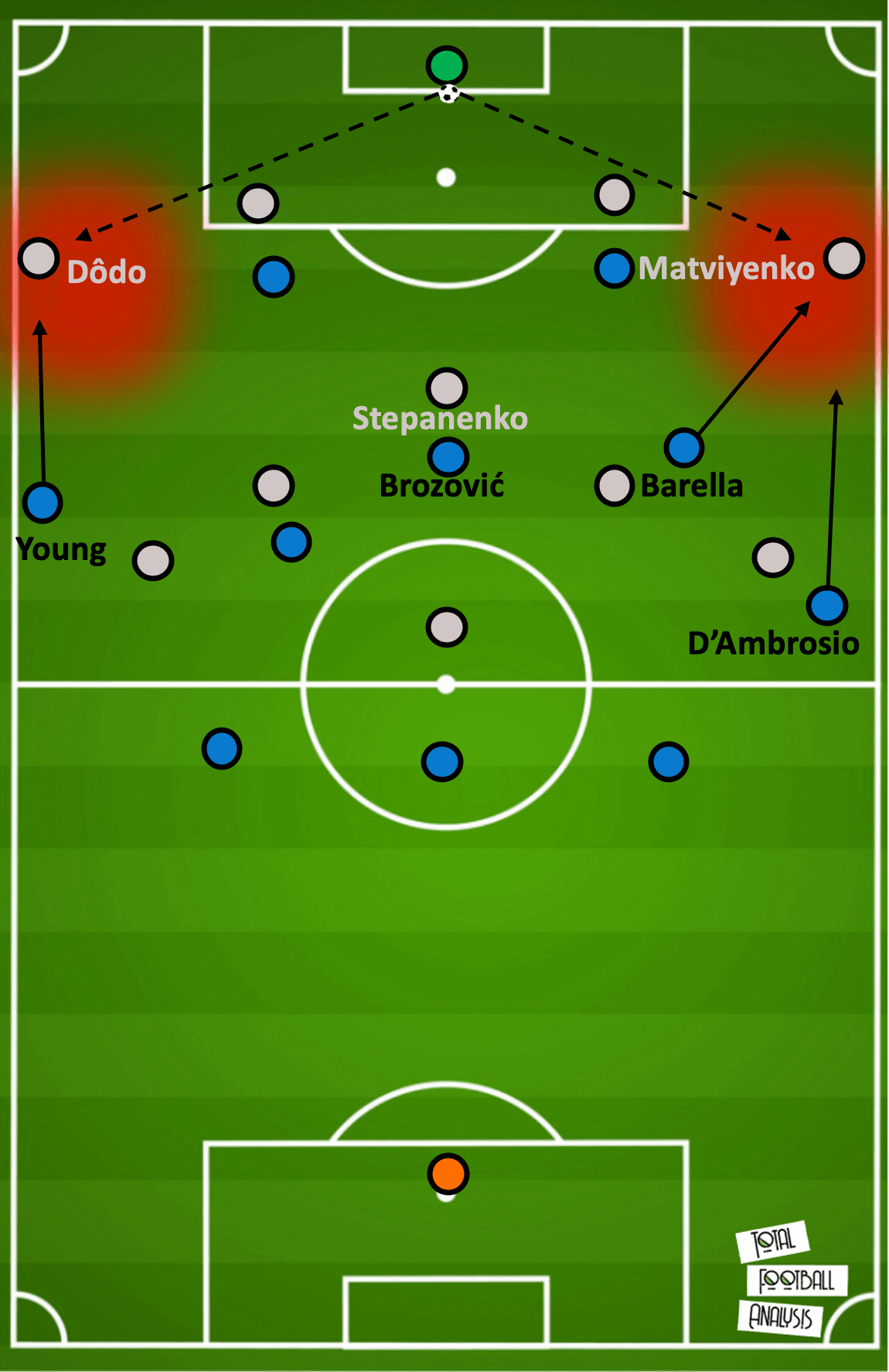 We can see Brozović marking Stepanenko, Young responsible for pressing Dôdo, and Barella responsible for pressing Matviyenko with D’Ambrosio in support. If D’Ambrosio was in a better position to press than Barella, the pressing/supporting roles would switch. One would not press if the other was out of position. When Barella pressed, Brozović would leave Stepanenko and would move into the position where Barella jumped out from, leaving Stepanenko free.

When Stepanenko dropped in between the centre-backs, Brozović would still follow him. We can see this in the image shown below.

Inter Milan had some interesting dynamics when they had the ball, particularly regarding the movement of their midfield three. When the right centre-back of the back three (Godín) was on the ball, D’Ambrosio would push up into a wing position while Barella would take up the position of wing-back on the right, the remaining midfielders (Brozović and Gagliardini) would create a double pivot.

A similar movement would occur on the left. When the left centre-back (Bastoni) was on the ball, Young would advance and Gagliardini would replace his deep and wide position, while Brozović became a single pivot with Barella usually more advanced in this situation. When the central centre-back (De Vrij) was on the ball, Inter Milan formed a lopsided midfield. Barella would push higher into the right half-space while Brozović and Gagliardini would form a double pivot. 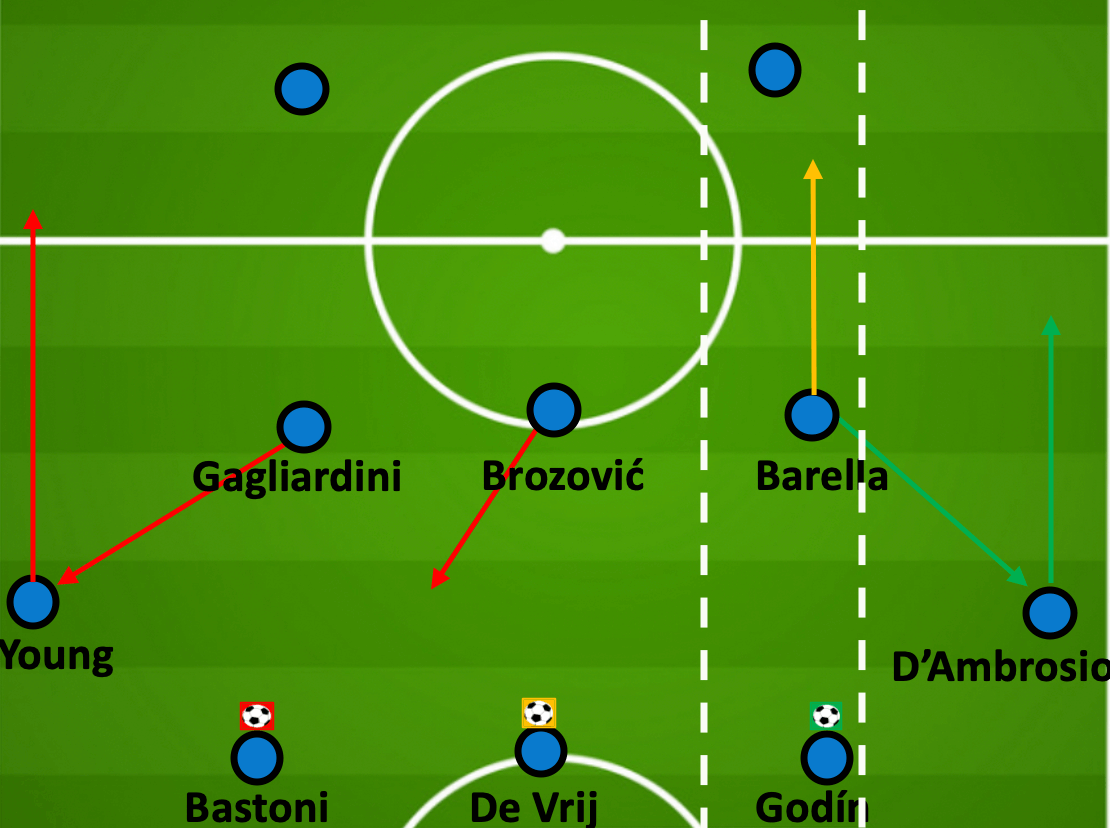 We can see the triggers for these movements in the diagram shown below, with the coloured arrows and balls corresponding to which Inter Milan centre-back was in possession of the ball and the subsequent movements of the midfielders and wing-backs shown.

In the example pictured below, we can see the first shift mentioned. When Godín receives the ball Brozović and Gagliardini form a double pivot while Barella becomes the right wing-back. 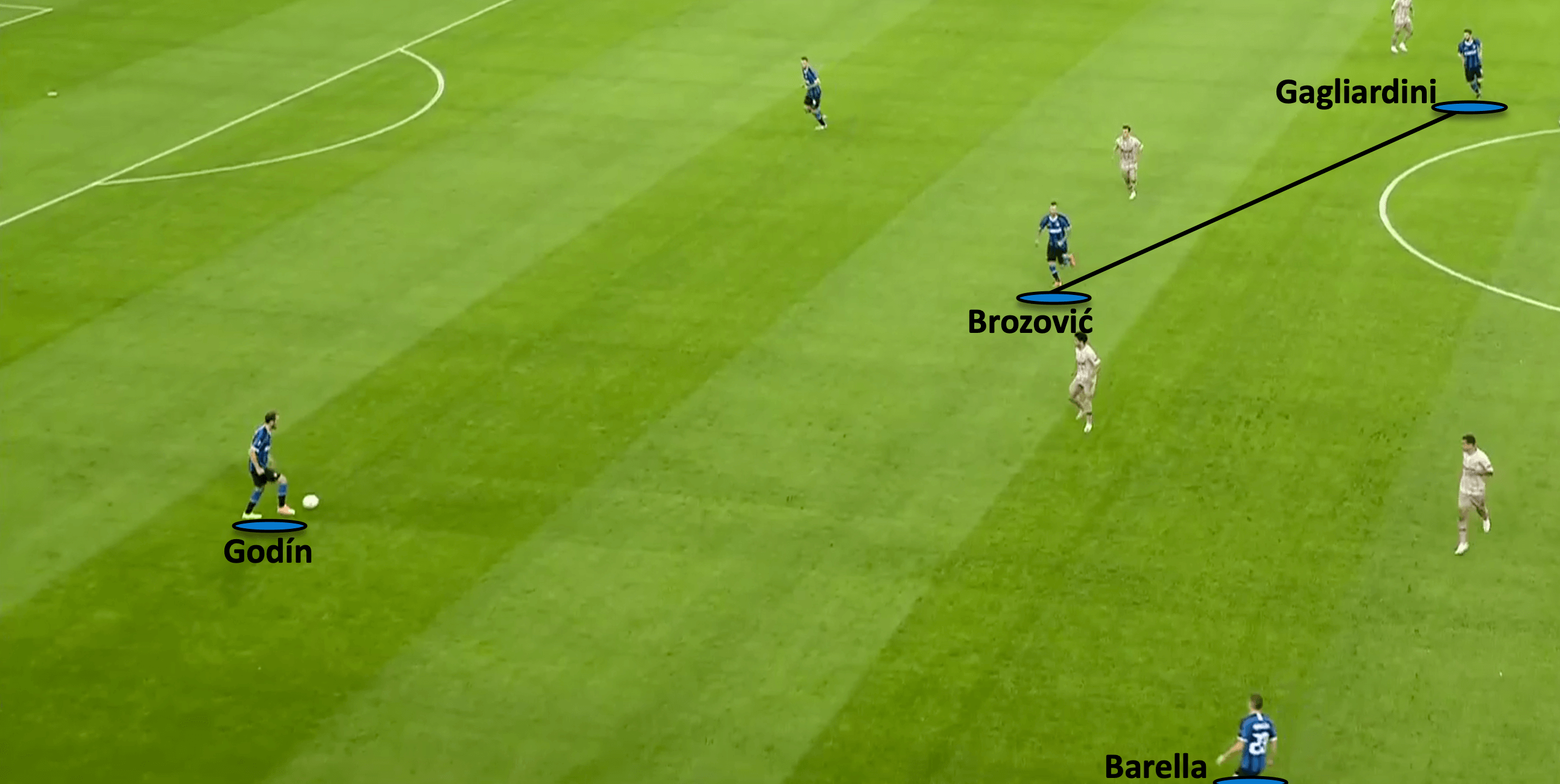 We can see the next shift when De Vrij was on the ball. This time Brozović and Gagliardini create a double pivot while Barella moves higher into the right half-space.

Despite having the majority of the ball with 63% possession, Shakhtar Donetsk struggled to create high-quality chances. This was mainly due to their poor positioning of their forward players and poor spacing during the earlier phases of their offensive organisation. In the images shown below, we can see examples of this poor offensive positioning from Shakhtar Donetsk. The players with white outlines are making safe passes but are not progressive, while the players with red outlines are not options for safe passes. A team with good spacing should be able to create chances to progress the ball vertically without having to risk possession being lost. 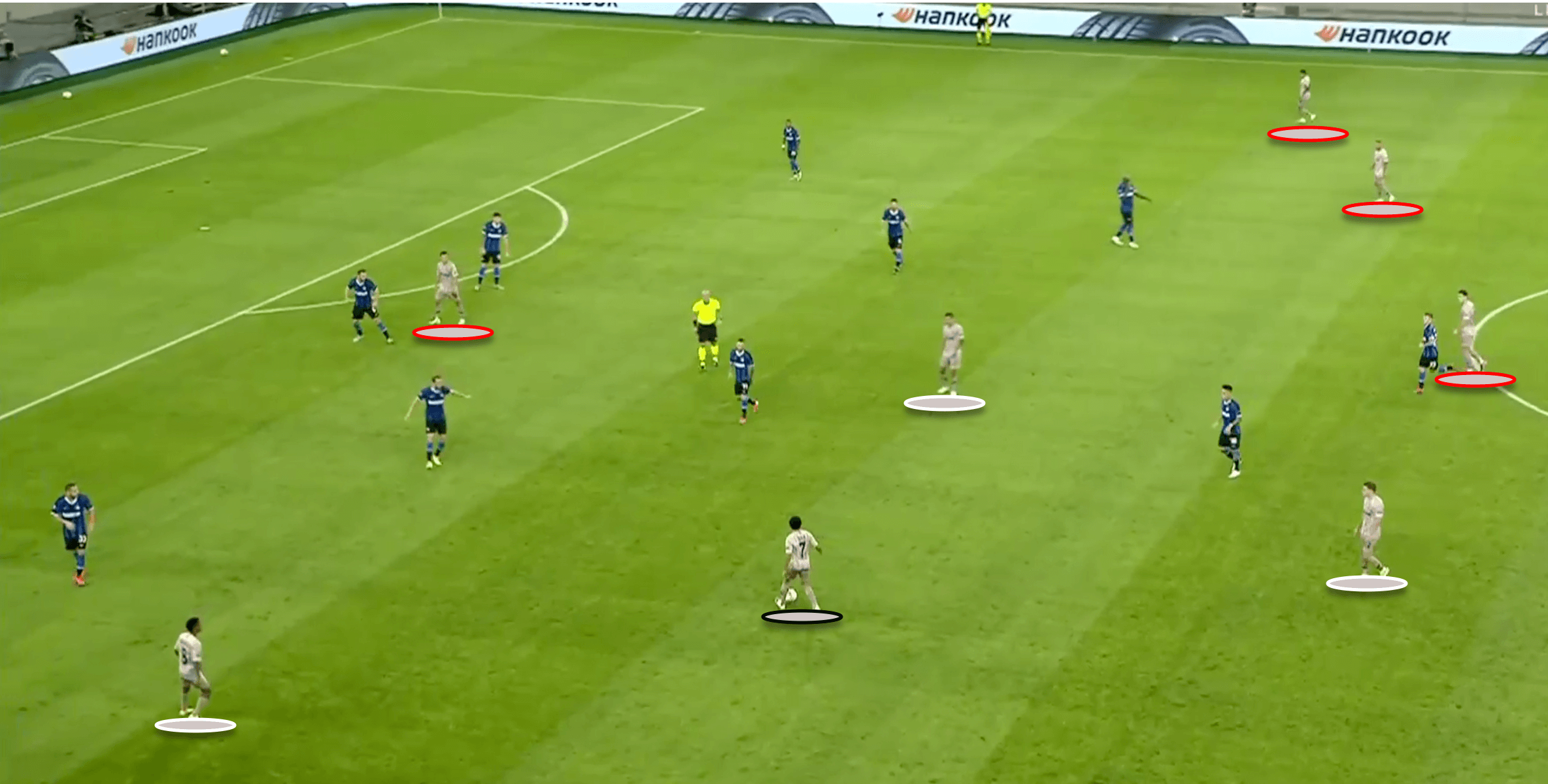 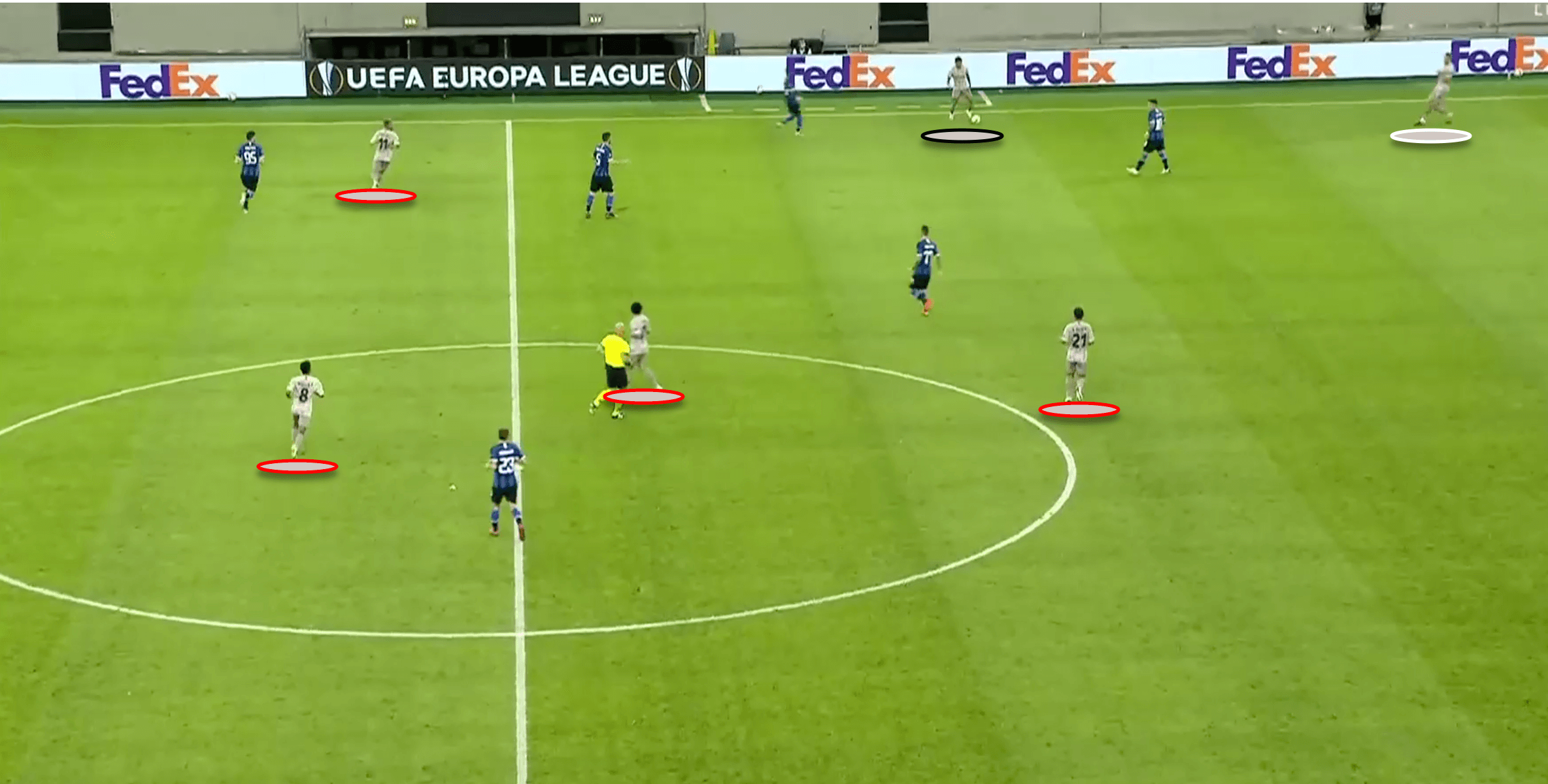 As mentioned previously, Inter Milan’s centre-backs were able to jump out to press without risk as there were no Shakhtar Donetsk players pinning them due to poor offensive positioning. The main culprit of this was their lone centre forward, Moraes. As we can see in the passing map shown below, Moraes (#10) struggled to affect the game and had very little impact. 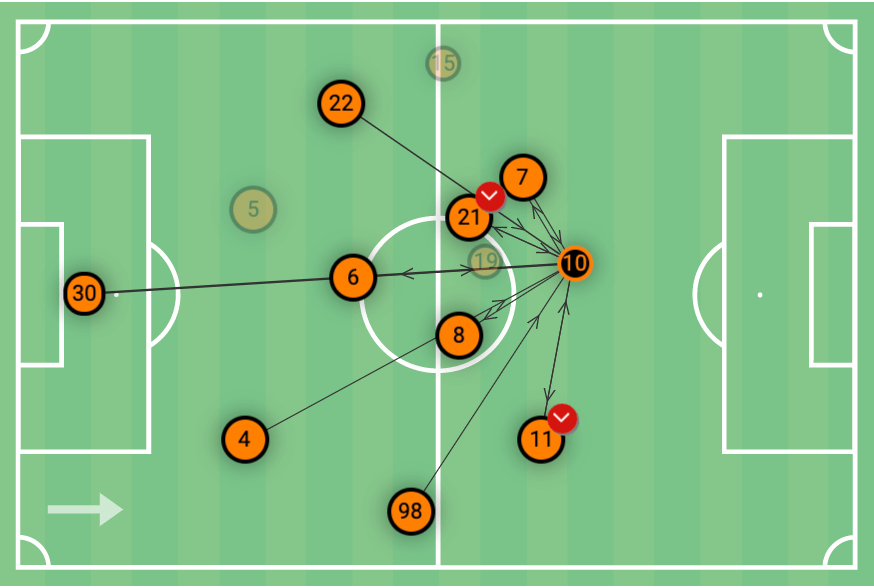 In the heatmap shown below, we can see once again how Moraes had very little impact, having just 21 touches, with a large portion of those coming from kickoffs. 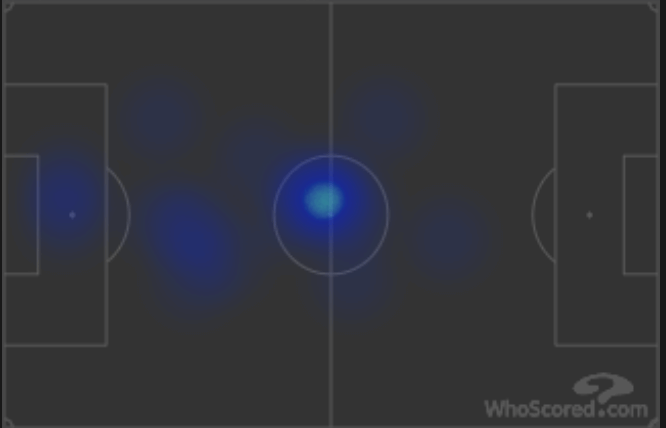 While the 5-0 final scoreline was flattering, Inter were the deserved winners of this match. They created more chances than their Ukrainian opponents and were extremely clinical, with Lukaku and Martínez each scoring a brace with D’Ambrosio scoring from a corner. They will face Sevilla who finished third in La Liga in the UEFA Europa League final after the Spanish outfit beat Manchester United in the other semi-final 2-1 after going behind.

Conte will see the convincing win as a promising sign as he looks to round off a second-place finish in Serie A with European silverware. Should they win the final, it would be their first piece of silverware since their treble-winning season in 2010 under José Mourinho.

While the heavy defeat will be bitter for Shakhtar, it was ultimately a successful campaign for the champions of Ukraine, with Castro impressing with his results after taking over after his compatriot Paulo Fonseca left to take over Roma in Serie A. Their league campaign kicks off soon, as they host Kolos Kovalivka on the 21st of August.