Rangers, under the tutelage of Giovanni van Bronckhorst, moved one step closer to the UEFA Champions League group stage on Tuesday night, as they managed to overturn a two-goal deficit with a remarkable 3-0 win over Union Saint-Gilloise.

Rangers left themselves with a mountain to climb in this tie as they suffered a defeat to the Belgians in the first leg last week, with van Bronkhorst admitting that his side were fortunate to keep the scoreline to just two goals, as Union Saint-Gilloise dominated for long spells.

Before the game, and given the club went out at the same point last season, there was pressure building on the former Feyenoord boss van Bronkhorst, but once again the team rose to the challenge for a European tie at Ibrox as they secured their place in the next round.

This article features the tactical analysis of the match and explains the key tactics behind Ranger’s dominant display and why it proved too much for Union Saint-Gilloise to stop, as the Gers were relentless in the pursuit of goals. 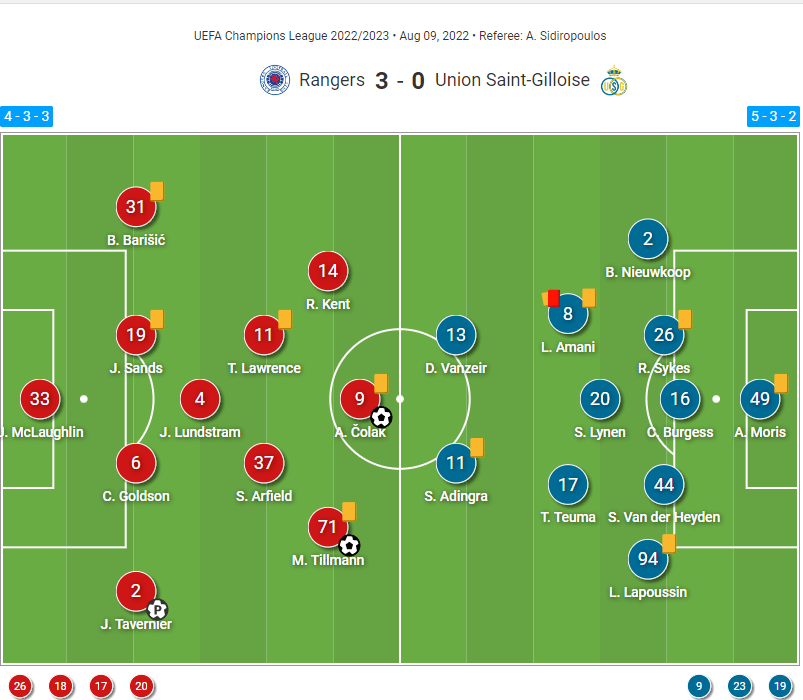 There weren’t any major changes to the home side’s starting eleven. Ryan Kent returned to the side having been named on the bench for Saturday’s SPL game against Kilmarnock.

Although Alfredo Morelos made a goalscoring return in that same fixture, Giovanni van Bronkhorst resisted any temptation to start him for this contest and Antonio Colak, who also found the net on Saturday, kept his place in the starting line-up. Both Glen Kamara and Ryan Jack remained as substitutes.

The team were set up within a 4-3-3 formation. During his time at the club, van Brockhorst has alternated regularly between the 4-3-3 and a 4-2-3-1. The Dutch manager was renowned last season for his tactical tinkering, especially in European games and it appears the same approach will happen this season. On Saturday the team set up in 4-2-3-1.

In this game, he opted for a 4-3-3 because the system offers the presence of an out and out number 6. This role enables the team to transition between attacking and defensive shapes with fluidity and is crucial for ball progression in posession and defensive stability out of possession.

Having only taken over in the summer after spending three seasons as assistant manager, he opted to play a 3-5-2 system. This is the formation he has played in each of his games so far, in both domestic and European competitions. The former Belgium international likes his team to play with a solid defensive shape relying on quick attacking transitions once possession is regained.

Defensively, Rangers set up not to allow Union SG to settle in possession. Union SG’s tactics were not to attempt to control the game through possession anyway, but any attempts to try and gain control of possession for long periods were thwarted by Rangers’ pressing structure.

When they were pressing high, Rangers pressed man to man as they aimed to block the passing lanes for the player in possession as well as aggressively seeking to win the ball from him at that moment.

From this point you can how the Union SG full-back, Lapoussin, only has one safe option and that’s to play long. The two other options for him are to play to the goalkeeper who Colak has already prepared to close down or play it across his defensive third, with Ryan Kent already moving to mark the right-back, Nieukdop, and cut that passing lane off. 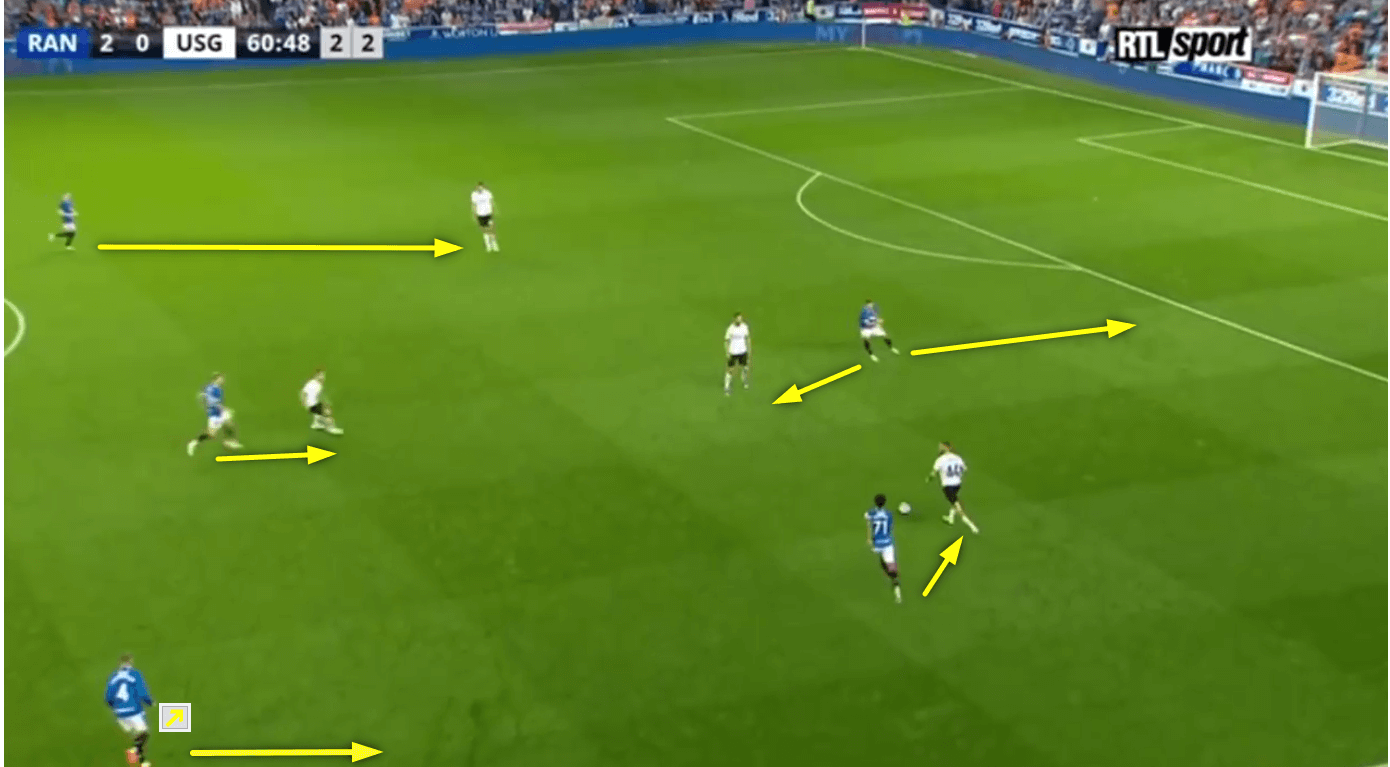 They didn’t have a particlar pressing trap they were working towards. It wasn’t to press the man and force him inside or force Union out wide to protect the central areas. When Rangers were pressing high, van Bronckhorst wanted them to press right across the pitch as he wanted Union to concede the ball quickly. This was partly down to the urgency of the scoreline, as Rangers were chasing the game, but it was also down to how Union SG was set up.

The 3-5-2 formation that Geraerts plays with was turned into a 5-3-2. It is natural for the 3-5-2 formation to switch into a 5-3-2 in defensive transition. However, as Union were looking to utilise the wing-backs during their build-up, it provided Rangers with a good opportunity to apply pressure out wide where they had a numerical advantage, forcing the play backwards and keeping Union SG in a 5-3-2 shape. This stopped them from having any consistent progression.

The image below shows Rangers pressing in the wide areas, The man-orientated pressing system has been applied and the option for ball progression is very limited. 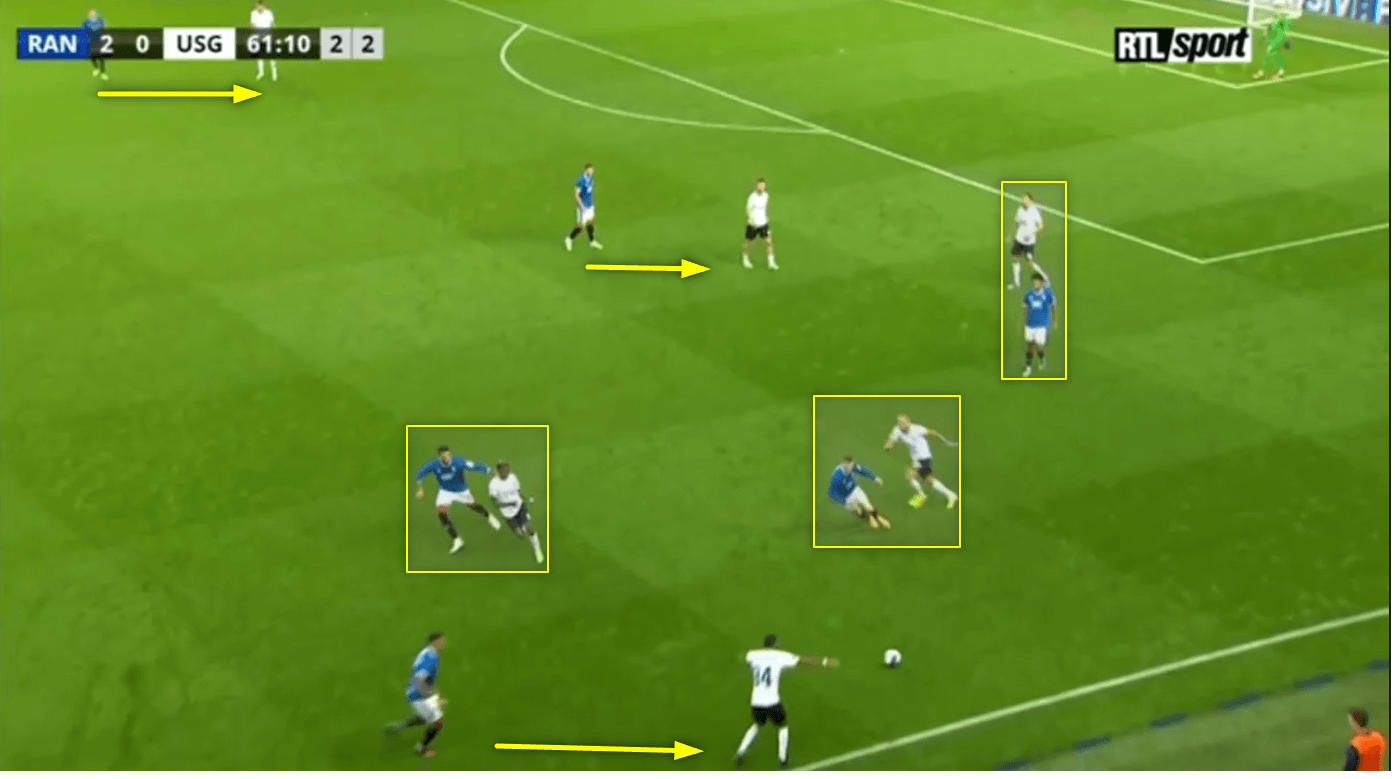 Rangers held 69.4% possession in the game compared to the 30.6% Union SG held. It shows that they didn’t have to do much defending throughout the match. Union SG was happy for van Bronkhorst’s men to have the ball to try and frustrate them, take advantage of their eagerness to reduce the aggregate score and hit them on the counterattack with quick vertical play.

Ranger’s defensive set-up when defending in their half countered these tactics well. As Union SG played with two main strikers, they were looking to take advantage of the space left when Barišić and Tavernier, the Rangers’ fullbacks were vacating whilst pushing higher. This would leave the two strikers for Union SG in possible 1v1 situoations with the centre-backs.

To counter this, John Lundstrum would drop into the back when Rangers were defending to allow the centre-backs to split further, provide cover and provide an additional man. It created a 3v2 defensively.

These next two examples show Lundstrum dropping into the back four, and making it a back five. You can see how this allows the centre-backs to push further out wide, which enables the full-backs to push up on the wing-back and in the second example how Goldson can follow Vanzeir’s run on the far side. 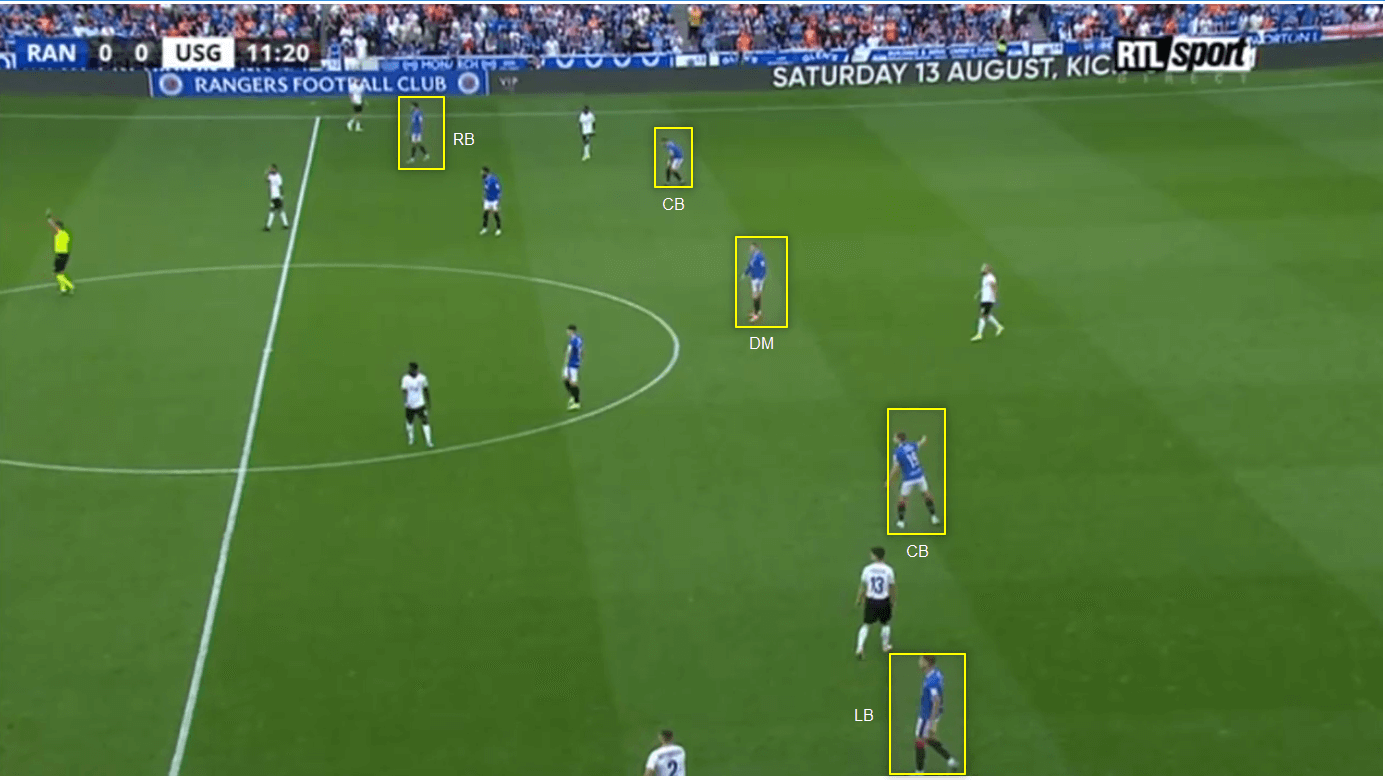 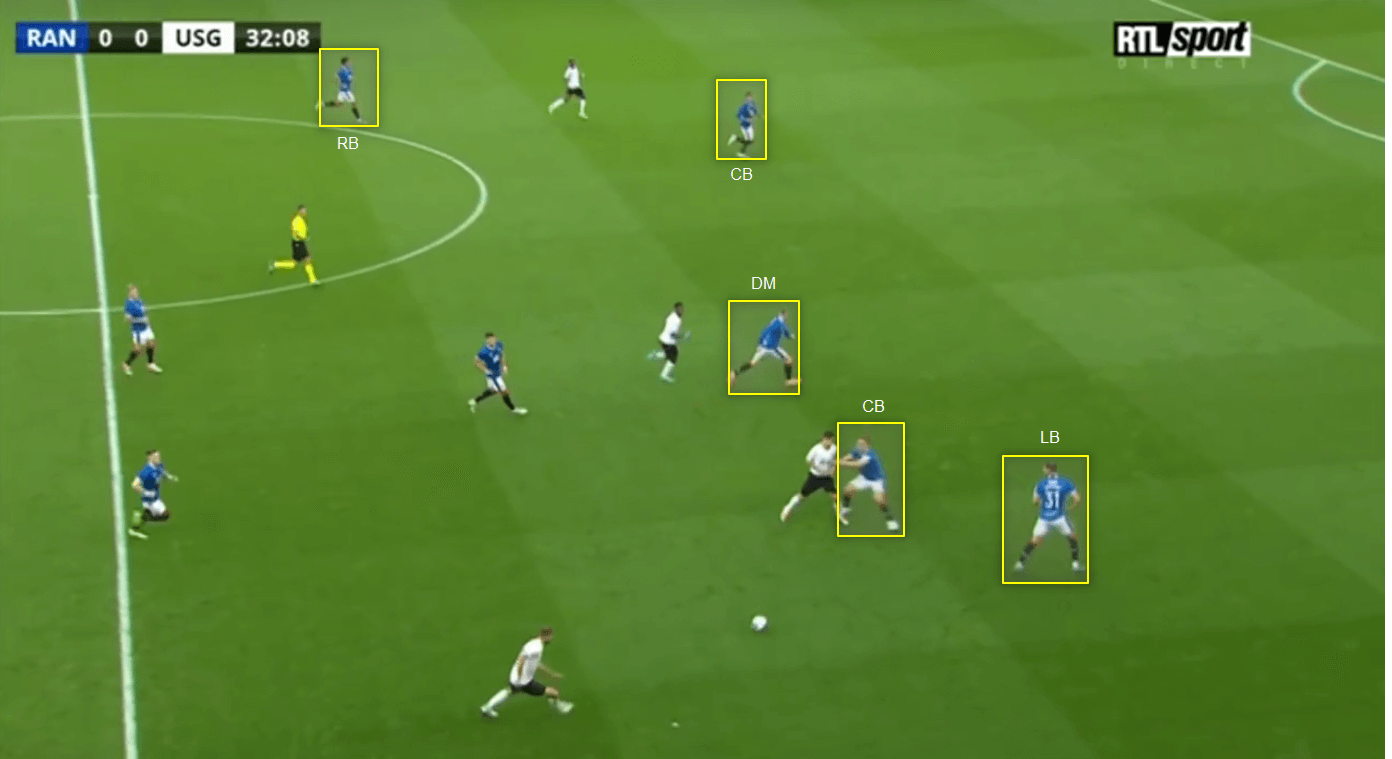 It was obvious that Rangers were going to have to attack and play on the front in this game, given that they were behind in the tie. Van Bronckhorst set his tactics to overpower Union SG’s low block in the attacking third. Union’s defensive tactic was to sit in 5-3-2 low block which occasionally switched to 5-2-3 when they wanted to apply pressure on the ball carrier.

To help overcome that Rangers’ 4-3-3 formation transitioned into a 3-1-6 formation as they wanted their attacking line to have a numerical advantage over Union SG’s defensive line. It helped create a 6v5 when they attacked the penalty area.

This pattern of play was a common theme throughout the match. The image below shows the position of Rangers imposed themselves on Union SG’s defensive line. Barišić would remain as part of the 3 in the 3-1-6 but given are deep Karel Geraerts team were sitting Rangers had all ten outfield players playing in their opponent’s half. Barišić was able to carry the ball forwards and look to cross to the far side as James Tavernier who is providing the width as the right full-back, joins the attacking line to create the sixth man in the 3-1-6 and overloads the right-hand side. 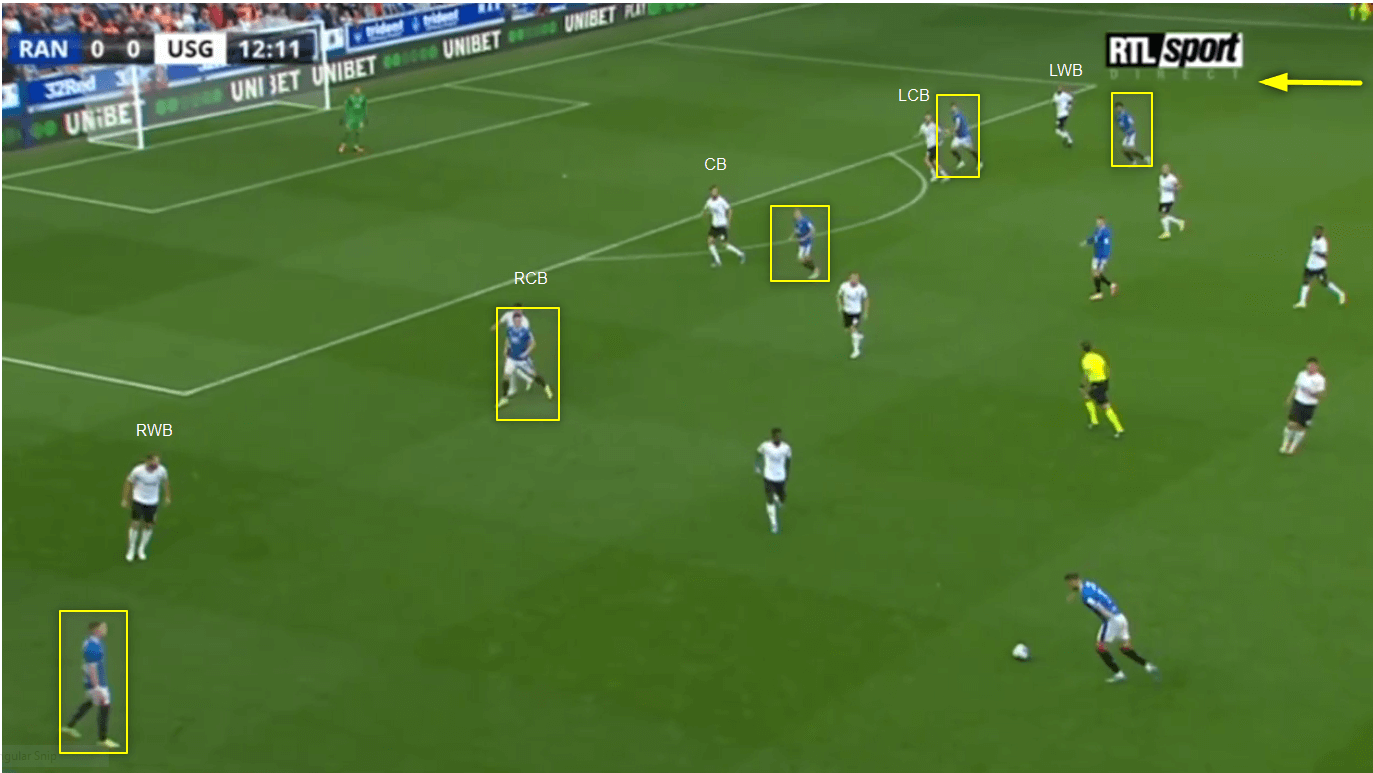 Focusing their attacks through the wide areas was a ploy by Rangers for two reasons. They wanted to get the ball into the box as quickly as possible and getting the ball out wide and crossing allowed the team to get numbers into the box and essentially gave them a better chance of creating a goalscoring opportunity.

The second was to use the numerical advantage a 4-3-3 gives you against a 3-5-2 down each flank. Creating overloads out wide was causing the Union SG defensive unit to become stretched and disjointed.

You can see how Sands is carrying the ball and how they have started to create an overload down the left-hand side. Ryan Kent hugging the touchline throughout the game was vital to these situations sd it meant Rangers always had an outlay to stretch the play. 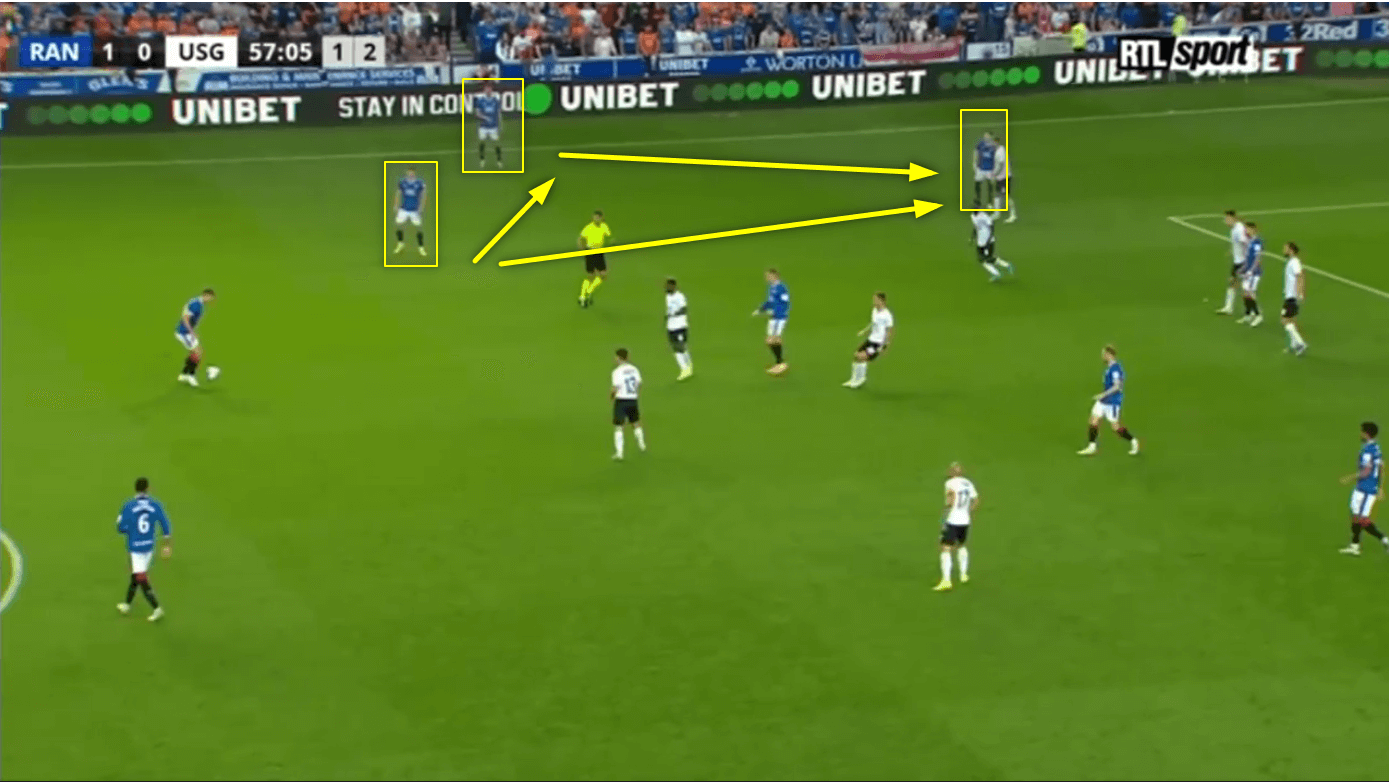 Passing the ball to the wide areas to attack from there allowed Rangers to move Union from the defensive shape. A principle within positional play is focused on moving the opposition through ball rotation and movement.

Union SG midfield sat very deep in a three-man block in front of the defensive line. They wanted to cut off the space between the lines and protect the pitch centrally and always try to maintain the play staying in front of them.

The wide play Rangers produced was good at bringing those players away from each other and the centre of the pitch.

Rangers are holding the ball centrally below. Kent and Barišić are ready to attack the wing back 2v1 and Amani is moved over towards the right-hand side to try and support the play. However, as you can see, he gets caught between two options because of the two positions Kent and Barišić have taken up. This disrupts the three-man block. 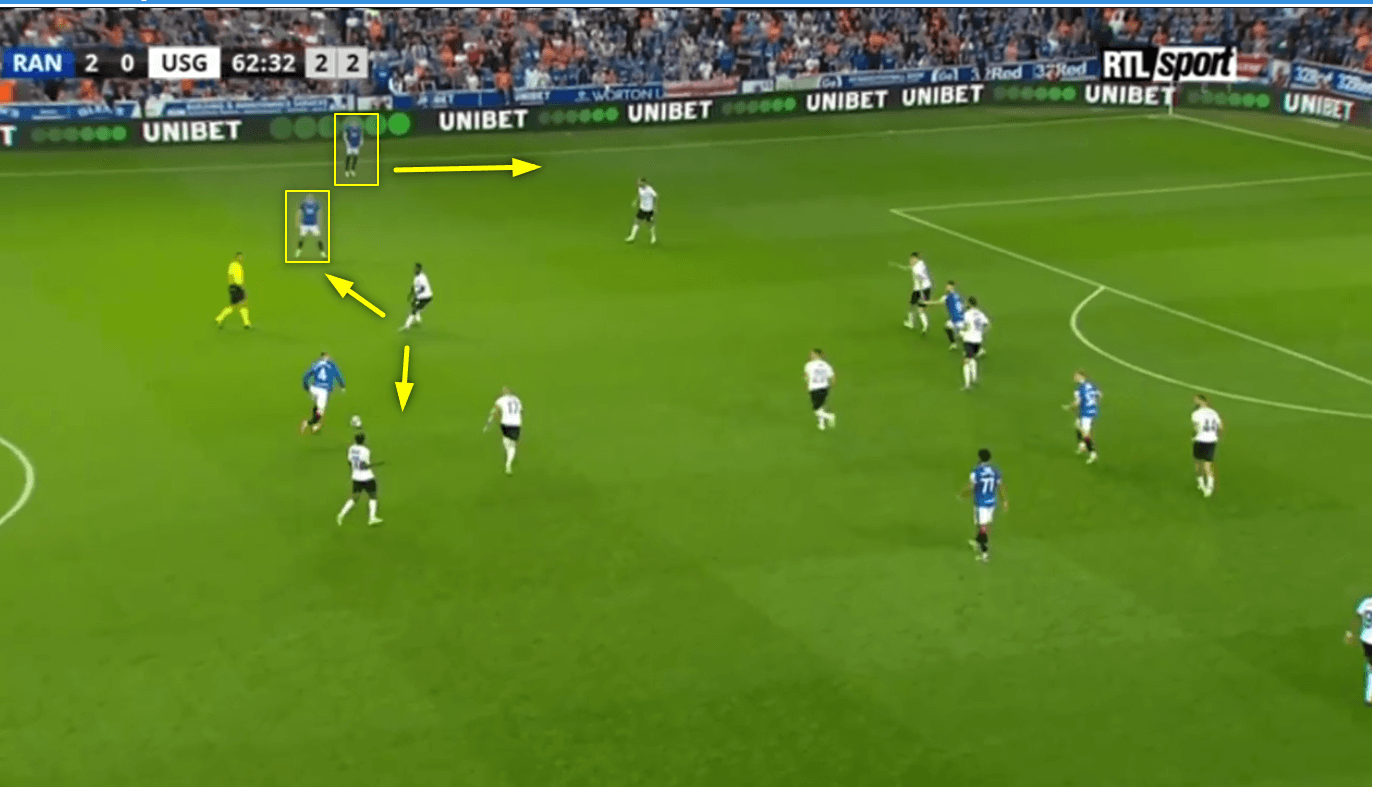 This was a good tactical performance by the Rangers. The objective of what they had to do was clear, but also how they planned to achieve it was evident as you could see the game plan set by van Bronkhorst straight from the kick-off.

Giovanni van Bronckhorst will now go up against former Holland team-mate Ruud van Nistelrooy as he takes his Rangers side to the Netherlands and back to his homeland for what will be a difficult game against PSV Eindhoven in the playoff round.

This analysis has broken down the key tactics of how Rangers overcame a poor first-leg defeat to Union Saint-Gilloise. We have provided an analysis of how van Bronkhorst set the team up in possession to help them achieve the goals needed to win the tie as well as how he set the team up defensively to ensure Union did not achieve the third goal.