In July 2020, Andrea Pirlo was appointed as the new boss of Juventus’ U23s in Serie C. However, merely nine days later, the inexperienced coach was handed an unexpected role as the manager of the Bianconeri’s first team after Maurizio Sarri was dismissed.

A month later, before the new Serie A campaign kicked off, the Italian great received near full marks on his UEFA Pro License thesis where he outlined his philosophy of how the beautiful game should be played.

But being one of the greatest midfielders of his generation holds little weight in football management. Pirlo had a point to prove and wanted to help Juventus to their tenth-straight Scudetto.

Unfortunately, things didn’t quite go to plan despite winning the Supercoppa Italiana and the Coppa Italia. The Old Lady scraped fourth place on the final day of the season and Pirlo was swiftly removed from his post.

Having taken a year’s sabbatical, Pirlo is now back in the dugout, agreeing to become the manager of Turkish side Fatih Karagümrük on a 12-month contract.

The 43-year-old will want to redeem his reputation after a failed spell in Turin but so far has gotten off to a poor start, losing 4-2 at home to Alanyaspor on the opening game week of the Süper Lig.

Nevertheless, there were still some interesting tactical observations from the game in this analysis. This tactical analysis piece will be focused on the tactics used by Pirlo thus far at his new club.

At Juventus, Pirlo was quite rigid and stubborn with his preferred formation choice, opting for the 4-4-2 in most games. The conventional structure was deployed in 72 percent of the Old Lady’s games during the 2020/21 campaign with the club legend in charge.

Nevertheless, on his competitive debut for Karagümrük, Pirlo set his side up in a 4-1-4-1 formation. In this shape, the manager is able to still have his preferential two banks of four, with an added player in between that plays zonally and marks any players that drop between the lines.

In the match, against Alanyaspor, coached by fellow Italian Francesco Farioli, Pirlo’s side were coming up against an extremely fluid 3-4-3. 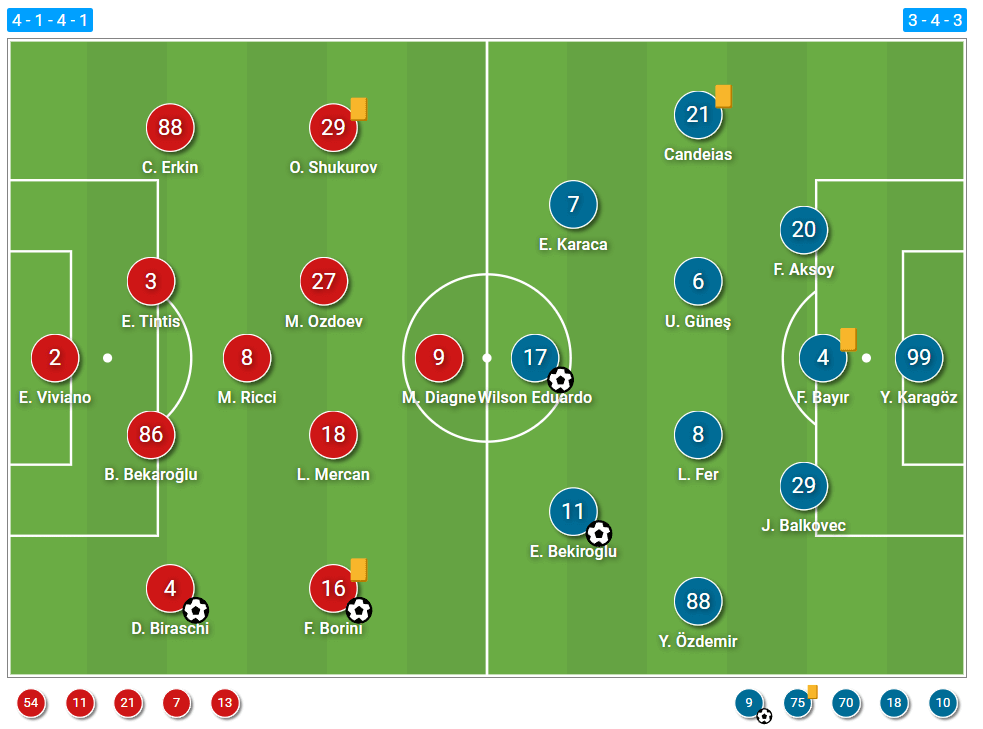 There were also several Italian players in Pirlo’s starting eleven too, including the former Sunderland and Liverpool winger Fabio Borini.

Emiliano Viviano began between the sticks, protecting the goal behind a backline comprising of Caner Erkin, Emir Tintis, Burak Bekaroğlu and Davide Biraschi, while Frosinone loanee Matteo Ricci operated in front as the single pivot.

Further forward, Magomed Ozdoyev and Levent Mercan were positioned as the advanced midfielders, flanked by Otabek Shukurov and Borini with Mbaye Diagne leading the line.

While not a perfect team, there was plenty of experience and youthful energy, mixed with serious quality as well.

Getting carved open through the middle

Pirlo wants his side to press high up the pitch. At Juventus, they did this, although Cristiano Ronaldo’s lack of participation made it quite difficult to execute an effective pressing scheme.

Since his arrival at the Atatürk Olympic Stadium, Pirlo’s keenness for his players to apply pressure to the opposition as close to the goal as possible has been evident. In the opening game of the season, Fatih Karagümrük boasted a low Passes allowed Per Defensive Action number of just 7.56 compared to Alanyaspor’s 9.18.

With PPDA, the lower the number, the more a team presses as they are allowing their opponents to make fewer passes before attempting to nick possession. 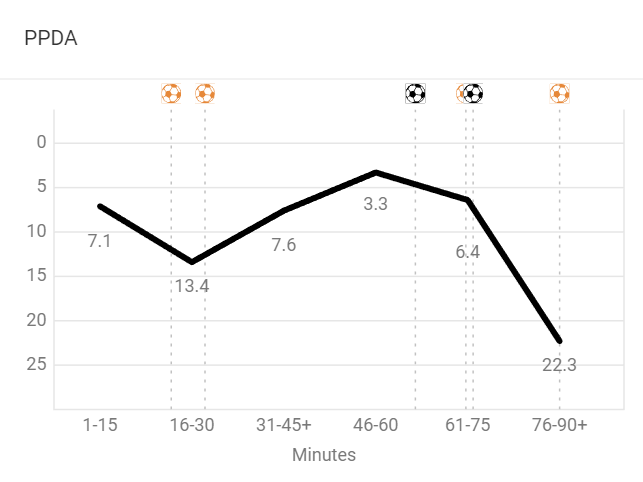 There was even a fifteen-minute spell after the interval where Karagümrük’s PPDA dropped as low as 3.3, so Pirlo’s team talk at half-time must have inspired the players to be even more aggressive with their pressing. These numbers look all the more impressive since Alanyaspor actually held the majority of the ball throughout the match.

Karagümrük were relentless with their pressing during the game, which is one of the biggest positives that Pirlo can take away from his.

However, the biggest negative is that the press was ripped to shreds at times. Sometimes, if a high block breaks down, the players may be to blame for a lack of trying or a failure to communicate with their teammates, but Karagümrük’s press was continuously carved open like a hot knife through butter.

Their 4-1-4-1 shape in the high pressing phase matched up quite well against Alanyaspor’s 3-4-3. 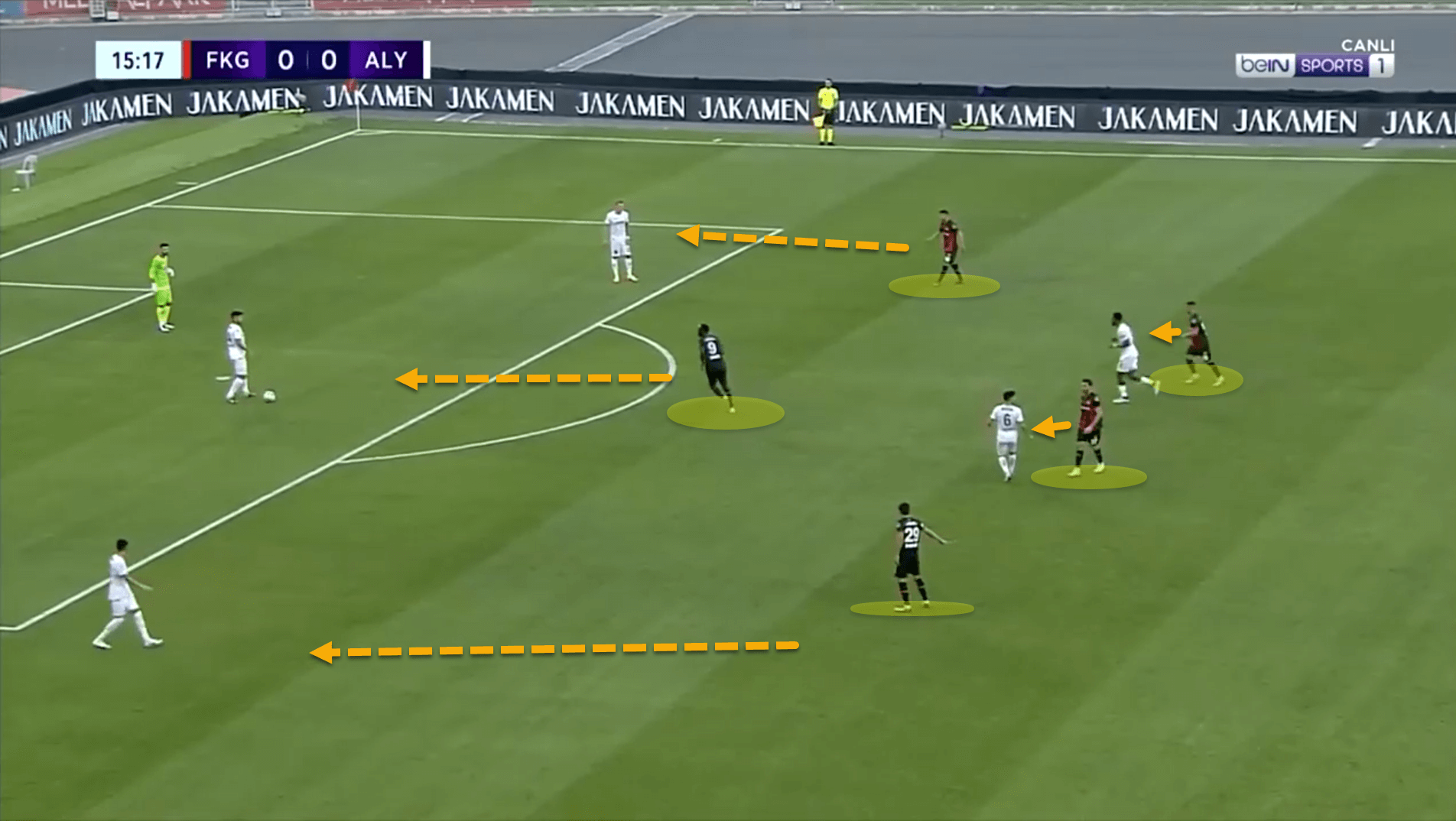 The wingers and centre-forward were tasked with staying tight to the three central defenders from Farioli’s side while the two advanced midfielders pushed very high to play man-to-man against Alanyaspor’s double-pivot.

Meanwhile, further down the pitch, the number ‘6’, Ricci, was deployed zonally, picking up any of the opposition’s players that were roaming in the space behind Karagümrük’s advanced midfielders. 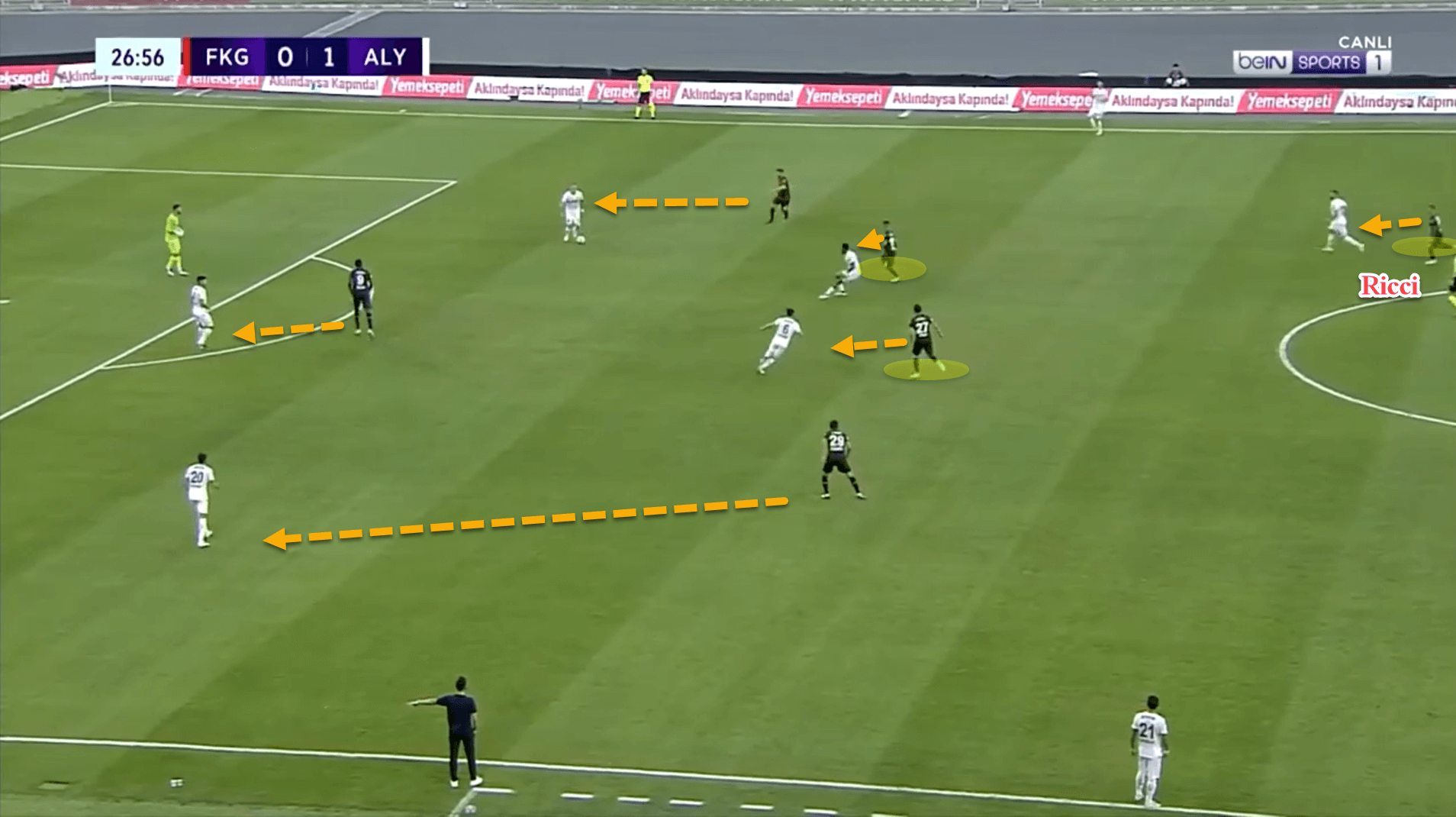 However, the biggest issue with Karagümrük’s pressing system was that the man-marking nature was far too strict, and caused the players to get dragged out of position too easily.

In the above image, Alanyaspor’s winger knows that by dropping deep, Ricci will follow, causing the backline to be exposed.

From there, another forward from the visitors dropped short. As there was no protection in front, the left centre-back was forced to step out and aggressively close him down, leaving the backline scarily exposed.

Alanyaspor were quick to take advantage of this through combination play and runs in behind. Within seconds, of breaking Karagümrük’s first line of pressure, the opposition were through on goal and had tapped the ball home to make it 2-0. 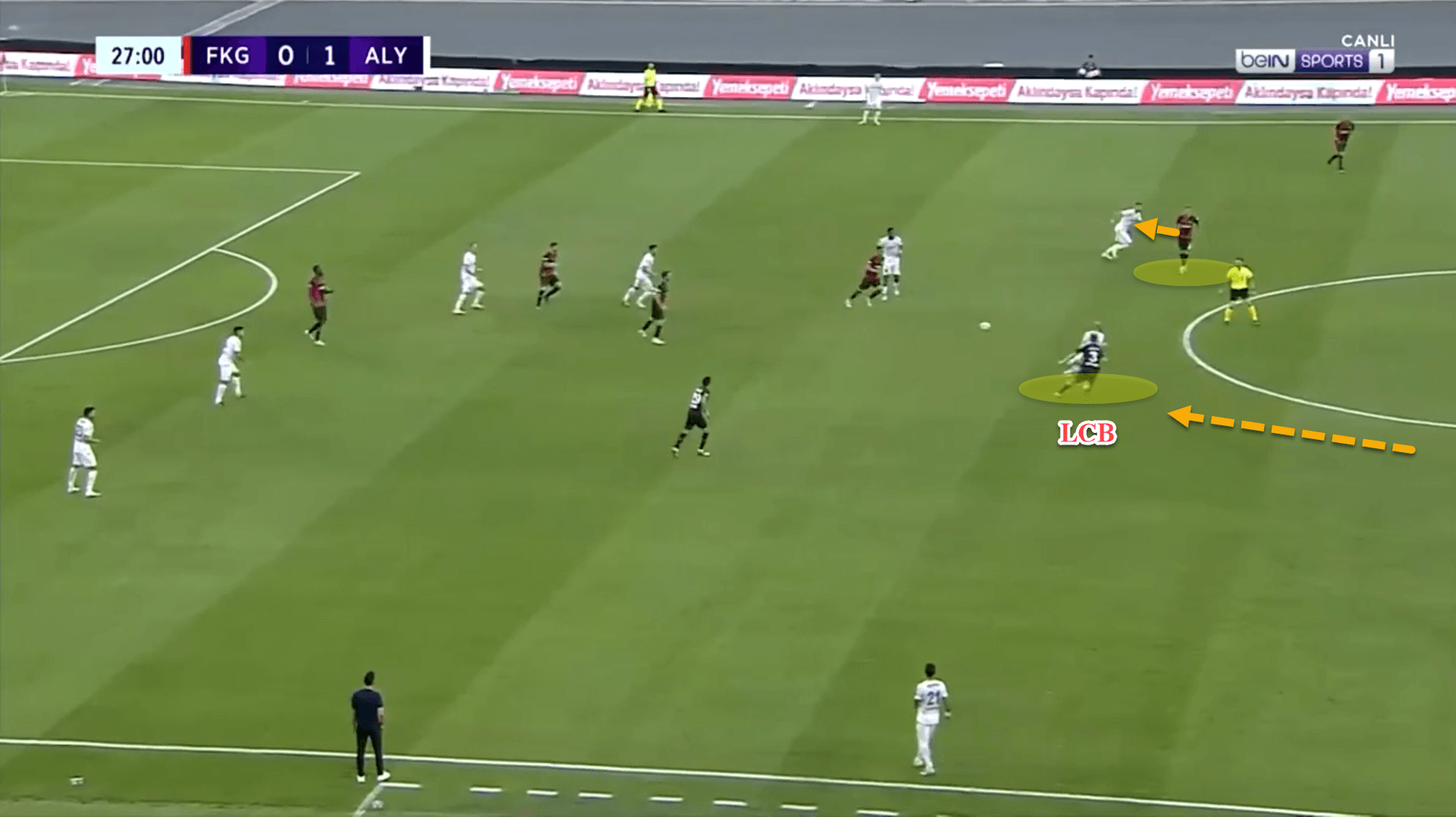 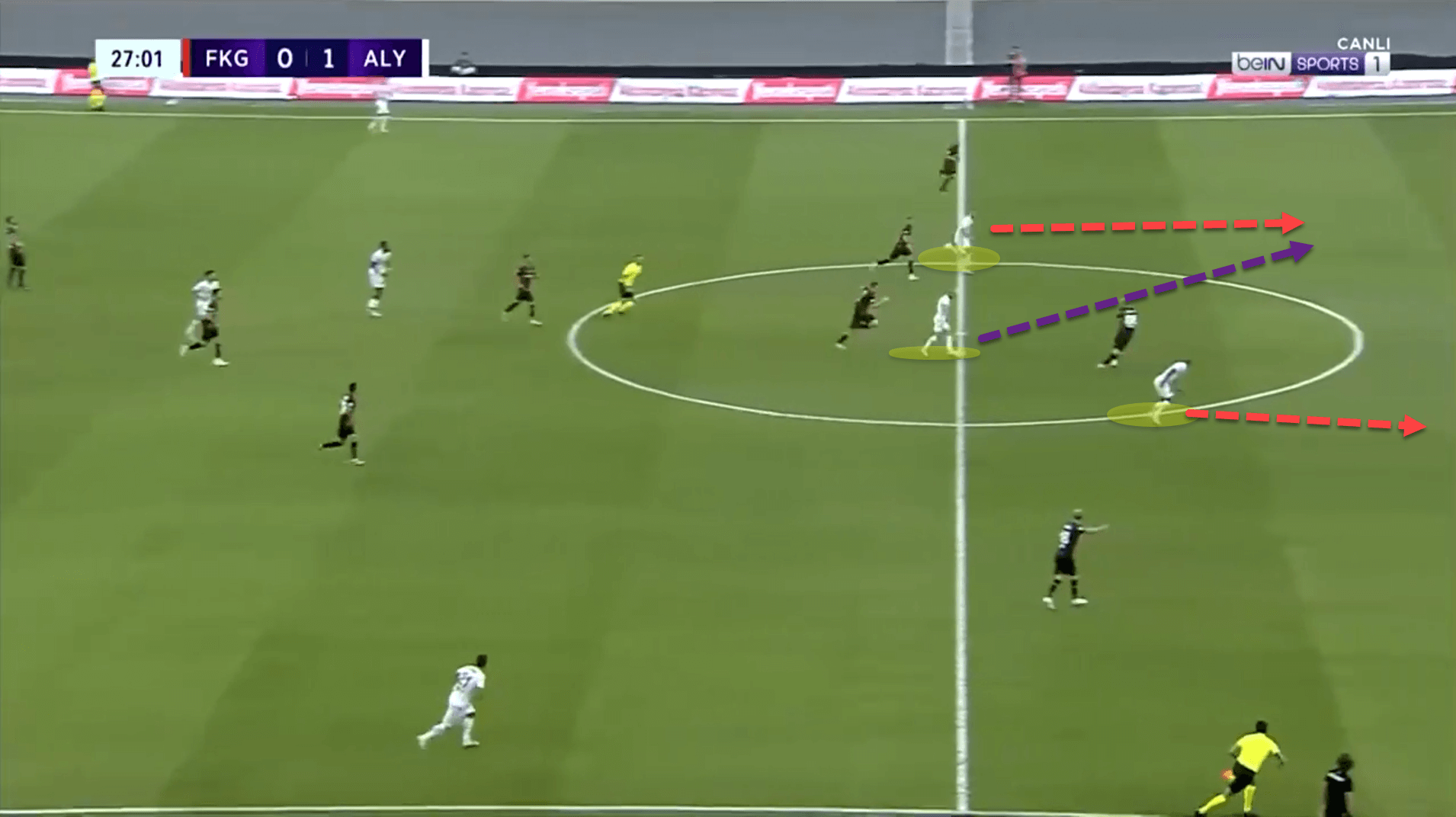 Both of Alanyaspor’s first two goals came from these situations. Karagümrük’s pressing leaves them far too exposed and can be easily manipulated through off-the-ball movements and quick passing.

Watching the game, while perhaps not being quite as intense or rigid, Karagümrük’s pressing was reminiscent of Leeds United under Marcelo Bielsa. There is no issue with wanting his team to press higher up the pitch, but Pirlo will quickly need to ensure that his structure offers more balance to the backline as, once Ricci was taken out of the game, it became a free for all.

Despite all its deficiencies, Pirlo’s pressing tactics did see some success in the game against Alanyaspor. In fact, the Turkish side even scored their second of the game during the high block phase. 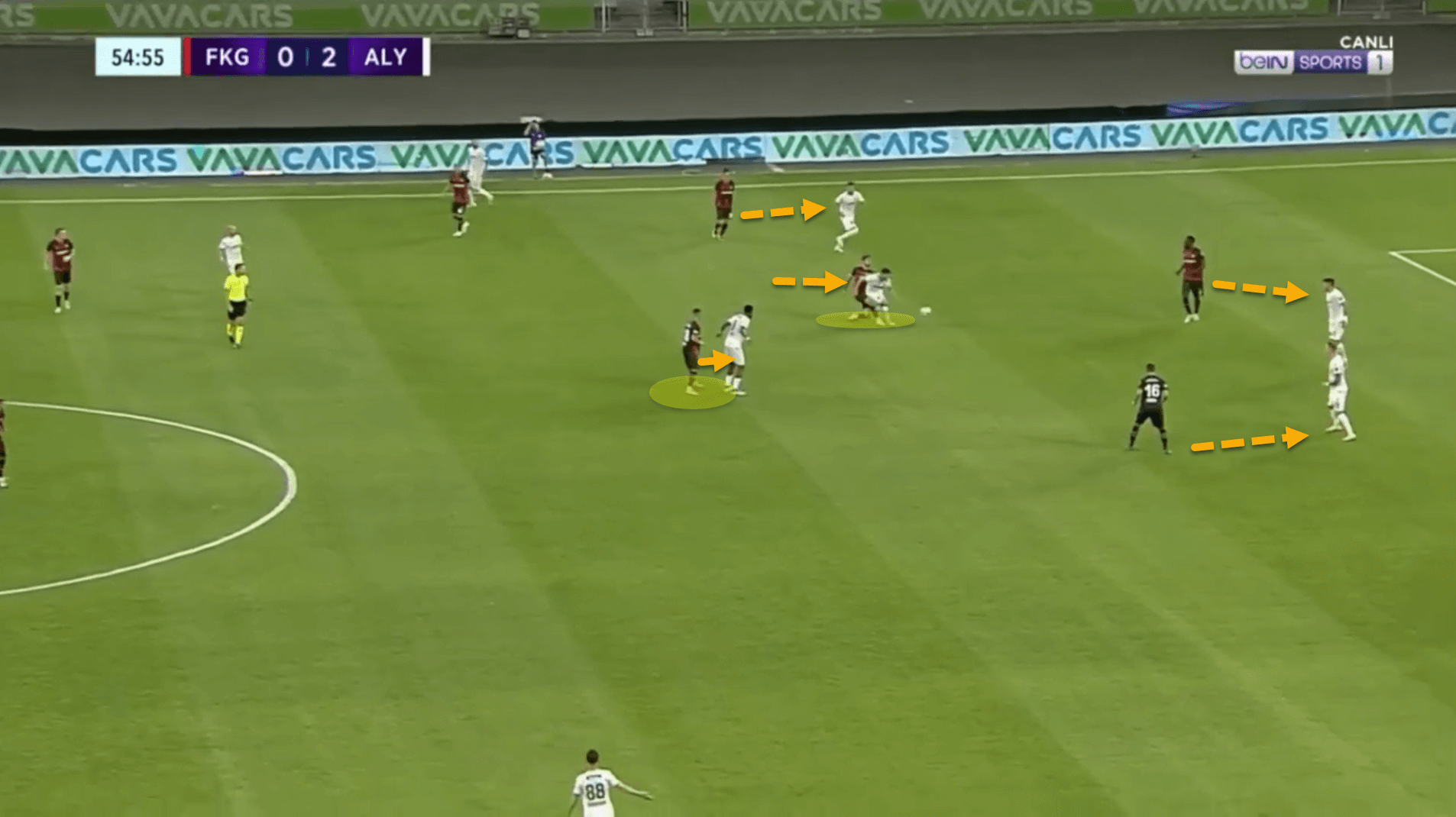 This is how Pirlo wanted his side to regain possession of the ball. As Alanyaspor’s double-pivot and centre-backs position themselves very narrow when in a positional attack, Karagümrük could themselves be narrow.

From there, the wingers and centre-forward would angle their pressure, trying to force the centre-backs to play into the two central midfielders when Karagümrük’s advanced ‘8s’ would quickly close down from behind.

Here, this actually worked, and Pirlo’s men won the ball in the final third before transitioning seamlessly from defence into attack and finishing the opportunity. 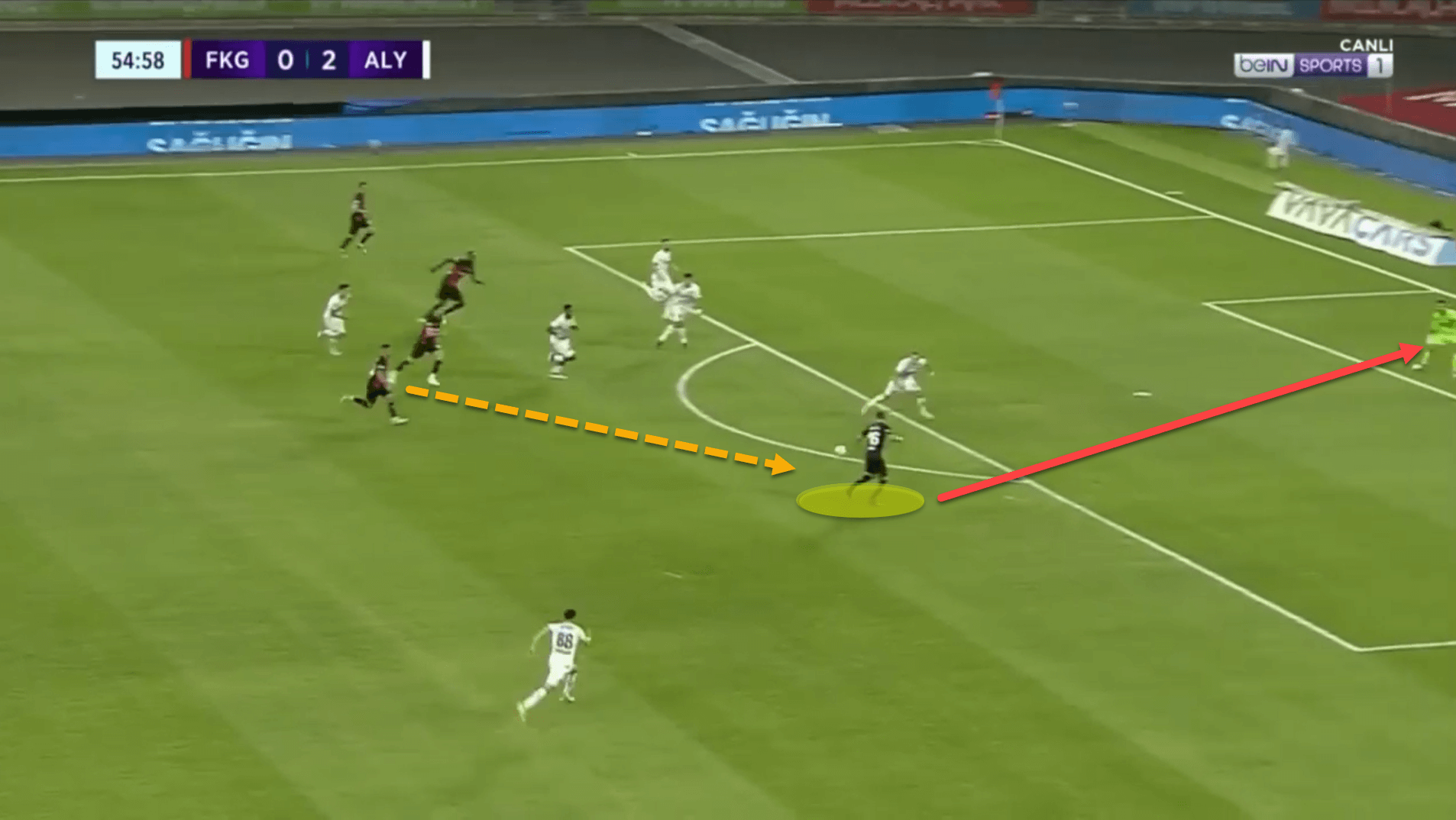 Unfortunately, as analysed in the previous section, the pressing system failed more times than it was successful which will be a massive issue that Pirlo needs to rectify and rectify fast.

When defending further down the pitch, Karagümrük looked to consolidate into a 4-1-4-1 mid-block. Their principles during this phase were interesting, although, once again, they were quite permeable. 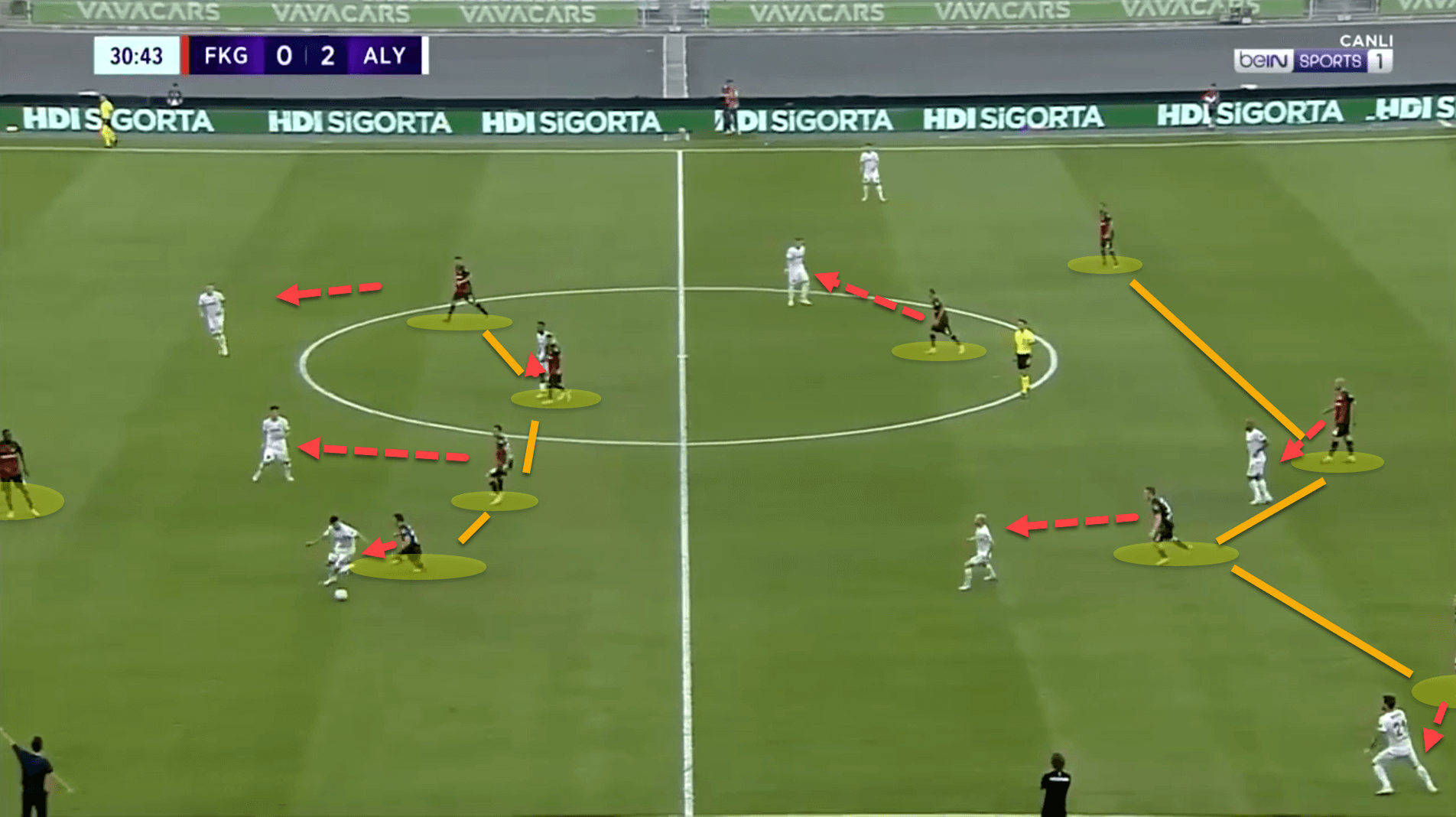 In this mid-block, Pirlo deployed a zonal structure with man-marking tendencies. Essentially, this means that each player would defend zonally but would aggressively mark any opposition player that dropped into their zone.

This even involved centre-backs stepping out of the defensive line to man-mark a forward, as can be seen from the image above.

The objective for Karagümrük was to force Alanyaspor to play out to the wide areas which would allow the players to use the touchline as an extra defender to aggressively close down the ball in order to try and regain possession. This is quite a common principle for any side in the defensive phases. 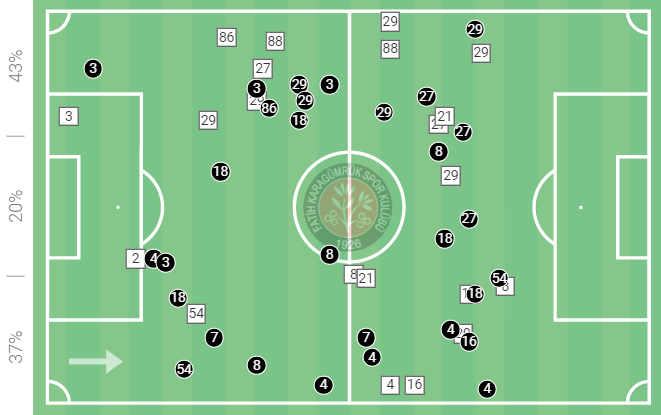 Looking at Karagümrük’s defensive duels from the game against Alanyaspor, we can see that 80 percent of them were in the wide areas and halfspaces, especially in the middle third of the pitch.

When defending the wide spaces in a settled shape, Karagümrük would drop the entire block over to one side in order to allow them to trap the opponents.

However, if this trap was escaped, the opposition would be able to quickly switch the ball out to the far side which was incredibly bare and exploitable. As Alanyaspor played with wingbacks in their 3-4-3, these wide players were always the target of switches of play from the visitors. 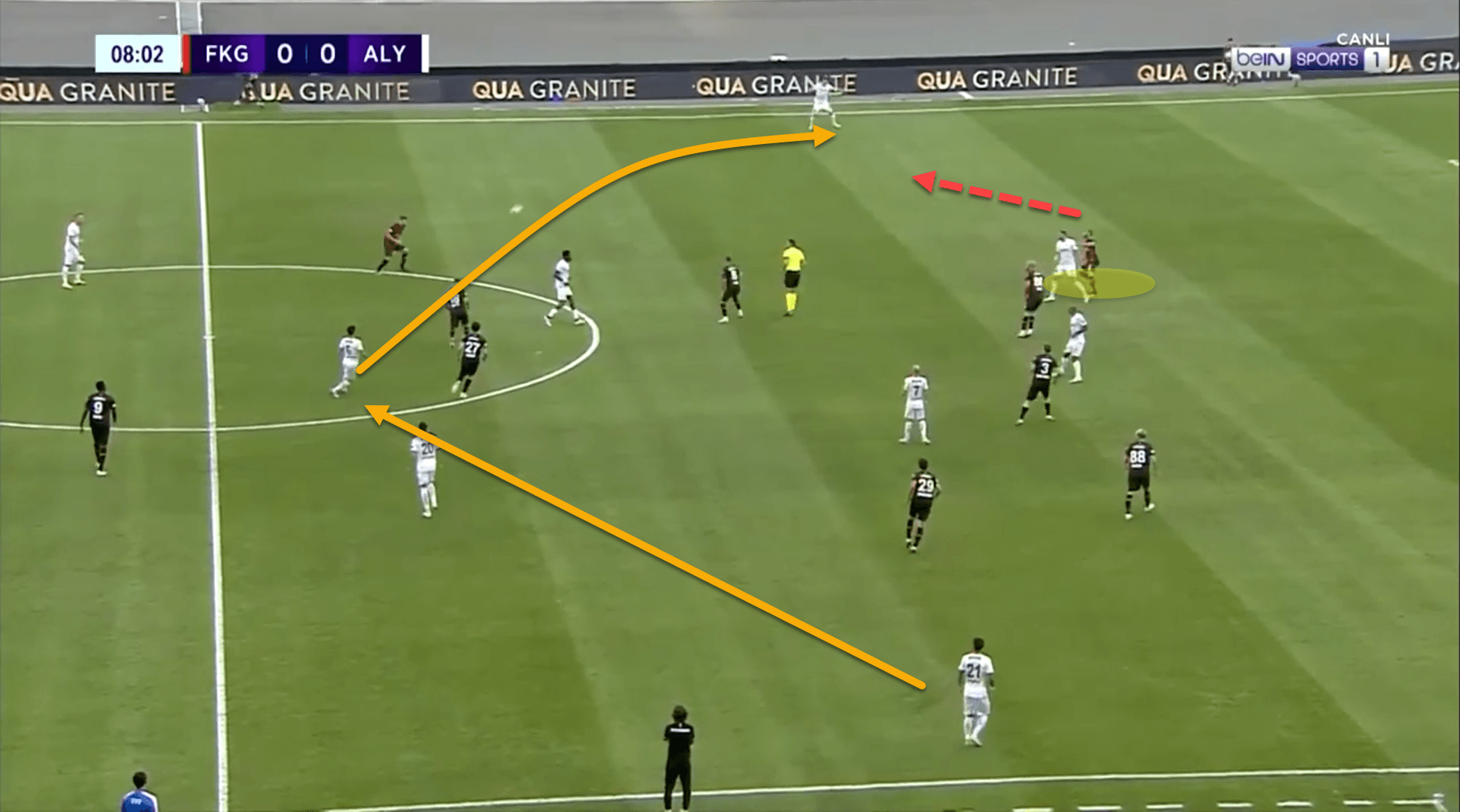 While one may not agree with Pirlo’s philosophy of how football should be played, his bravery is certainly commendable.

The Italian coach deploys a high-risk, high-reward strategy in every phase of the game. Unfortunately, it proved much riskier than rewarding against Alanyaspor.

At Juventus, regardless of the formation at play, Pirlo instructed his players to build out from the back using a 3-1 structure. In a back four shape, one of the fullbacks would tuck inside and create a three-man backline while the other fullback would push further forward.

If Pirlo’s Juventus were using a double-pivot, one central midfielder would push up between the lines while the deepest player would stay behind the opposition’s first line of pressure.

Even in settled positional attacks in the opponent’s half of the pitch, this was the tactical set-up. 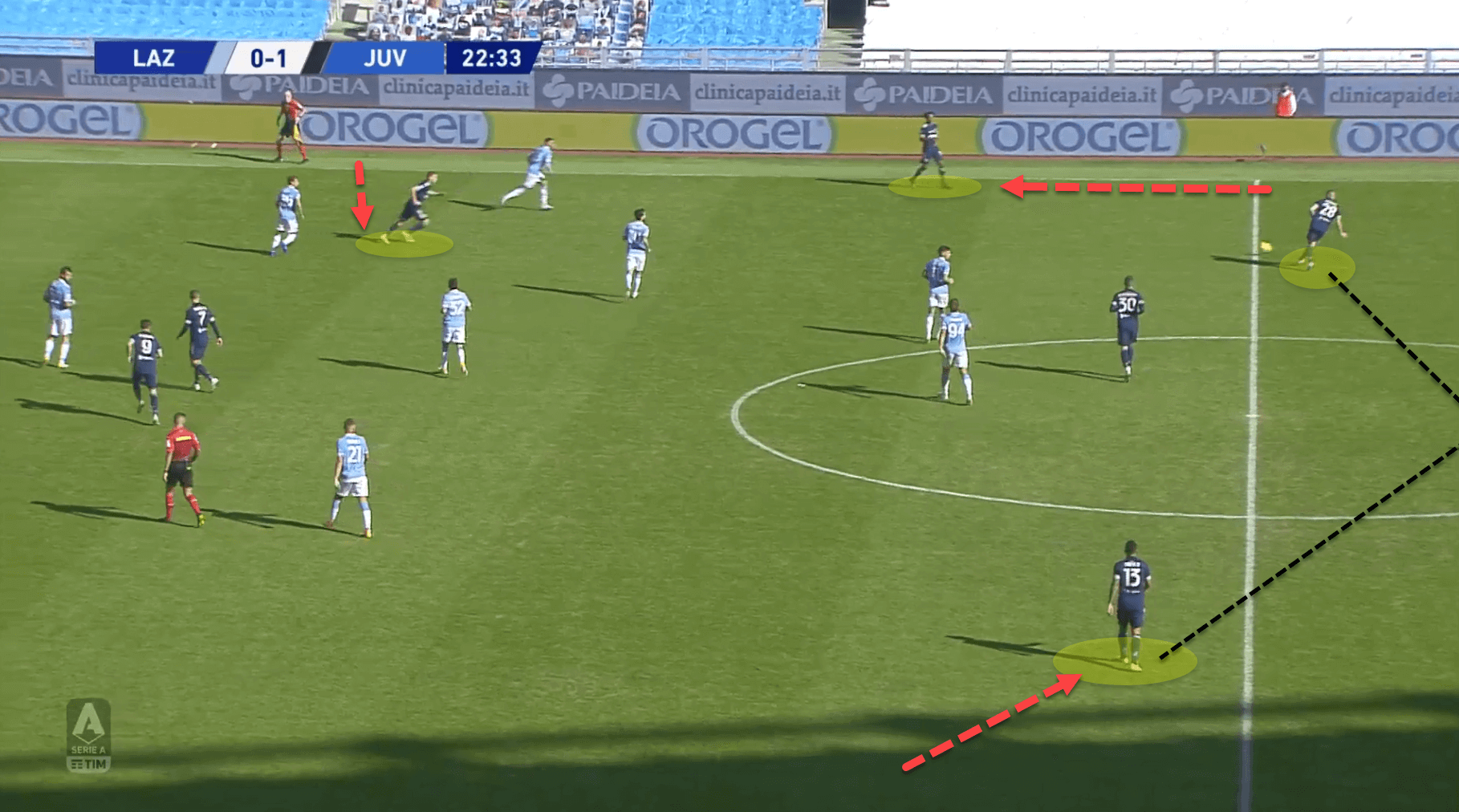 At Karagümrük, after just one game in charge, the similarities were very noticeable between the Italian manager’s two sides.

At the weekend, the Kara Kırmızı used a 3-1 structure at the base of their positional attacks. 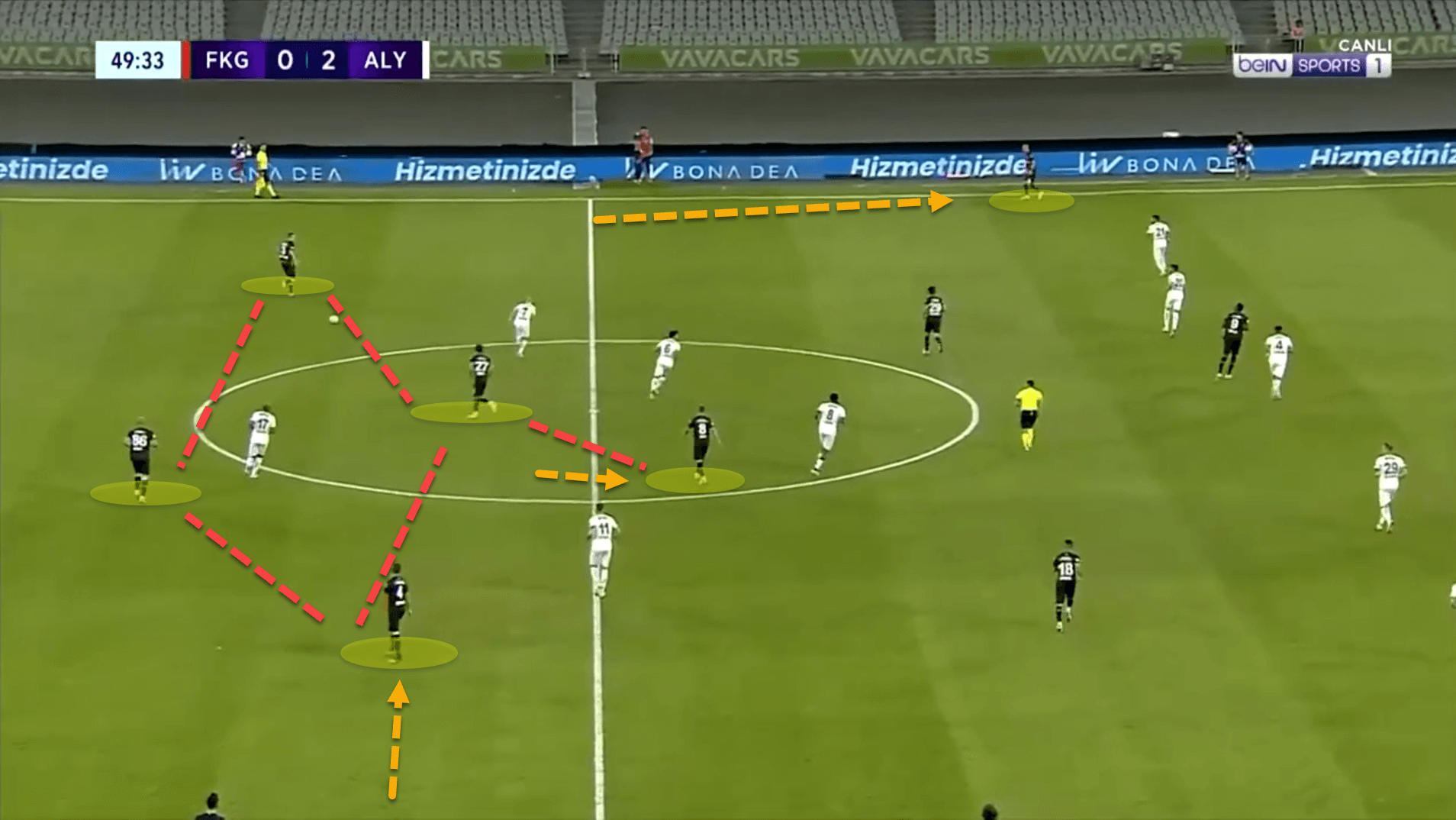 Karagümrük looked to break down the opposition using one predominant method when in a settled positional attack which was by putting crosses into the box for Diagne to use his aerial prowess to latch onto crosses.

The 3-1 base structure allowed them to push left-back Erkin high up the pitch on the left side to whip in balls from deep. There was an interesting pattern to Karagümrük’s crossing though.

Over the course of the match, Pirlo’s side whipped 23 crosses into the box in total. There was a clear order from the manager to try and put balls out-swinging balls in from deep. 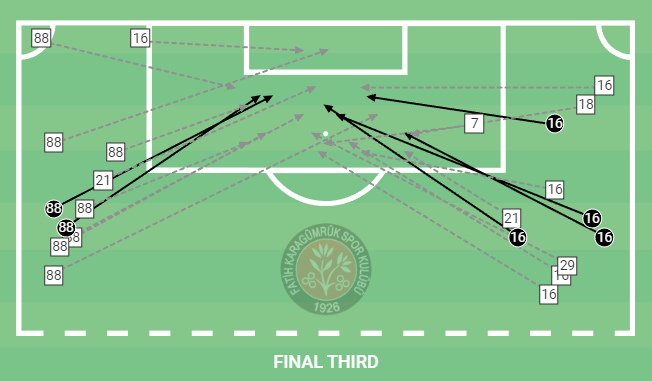 11 of their 23 crosses were down the left while 12 were on the right. However, Erkin played more crosses than any other player, with 9. The Turkey international constantly tried to hit these crosses in deeper areas with his left foot for Diagne to attack. Unfortunately, six of the 23 crosses were actually successful.

Karagümrük also created wide overloads in order to aid the players to get free in order to cross into the penalty area. But, on the occasion that they were unable to cross it, Pirlo instructed his side to quickly switch to the far side. Hence, why the numbers of crosses on both flanks were almost equal. 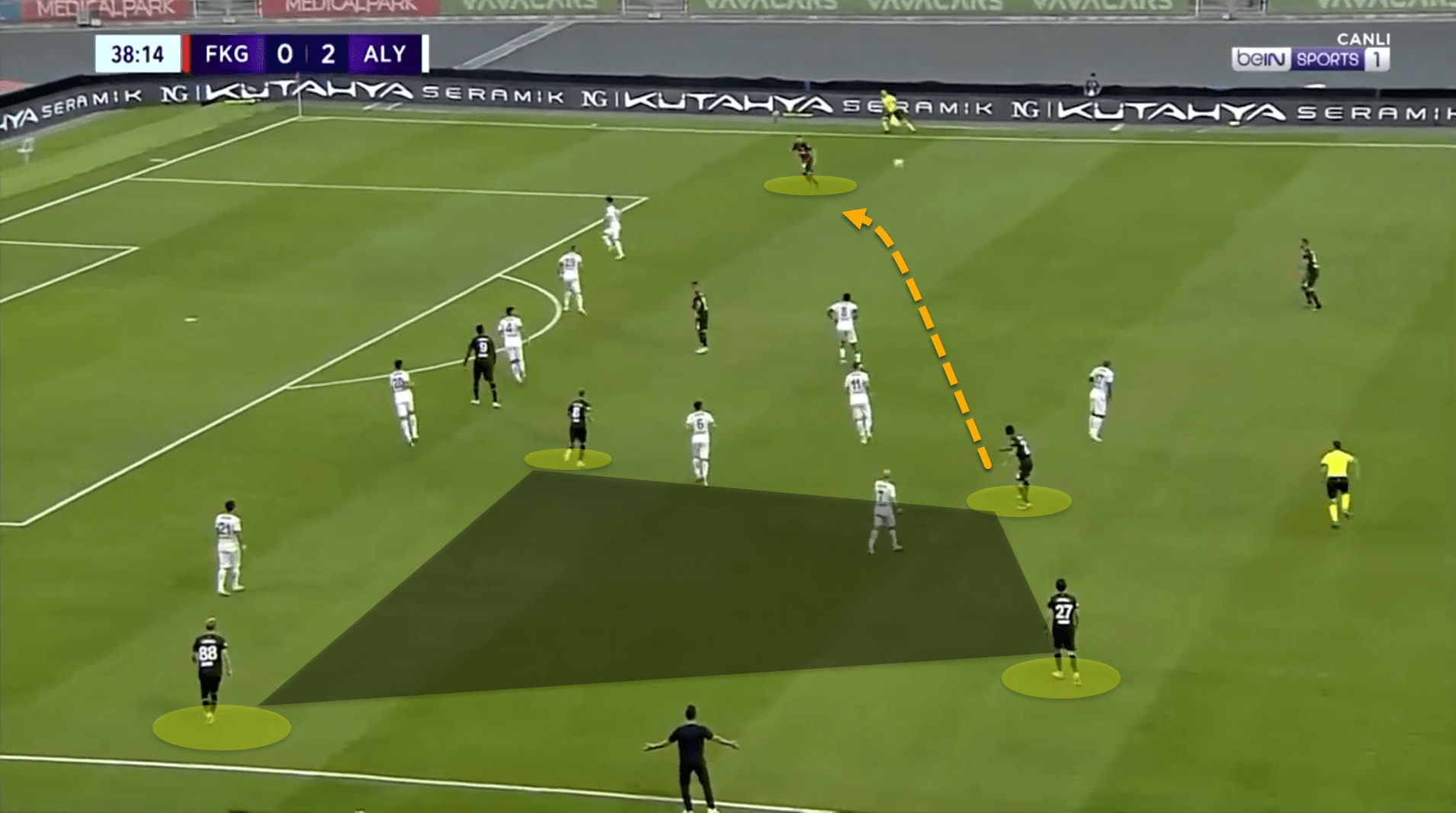 They were decent at switching the play, but most of the crosses were wasted and so it became quite a tedious method of attacking for Karagümrük.

It’s a new side for Pirlo, after taking a full year out from the game. However, the same ugly issues are rearing their ugly heads. At Juventus, the lapse in the team’s high press was often blamed on Ronaldo’s unwillingness to do so. At Karagümrük, the coach will need to take full responsibility.

Credit to Pirlo, his teams try to play exciting, attacking football. But there are major creases in his philosophy that need to be ironed out as soon as possible.

His spell at Karagümrük will either be a redemption arc or a potential nail in the coffin of his coaching career at the highest level. 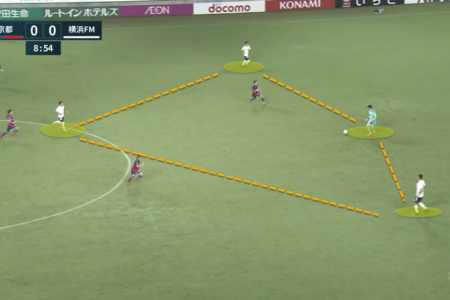 Yokohama F. Marinos, Australia and the Old Firm Derby have all been involved in a strange love triangle in recent […] 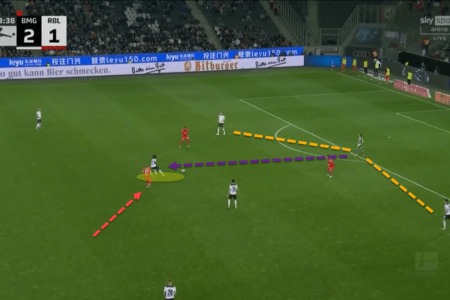 The 2021/22 campaign was a gruelling and debilitating season for all stakeholders involved in Borussia Mönchengladbach. The once-great German club […]