FC Porto welcomed Manchester City to the Estádio do Dragão for their UEFA Champions League match on Tuesday. While Man City dominated most of the possession and much of the match, Porto were well-organised and found a way to keep City at bay, securing a 0-0 draw. The result means that Man City finish at the top of Group C, while Porto finish second.

This tactical analysis will examine the tactics used by both City and Porto. The analysis will look at how Porto set up defensively, what Man City did to try and counter that set-up, and Phil Foden’s contributions to the match. 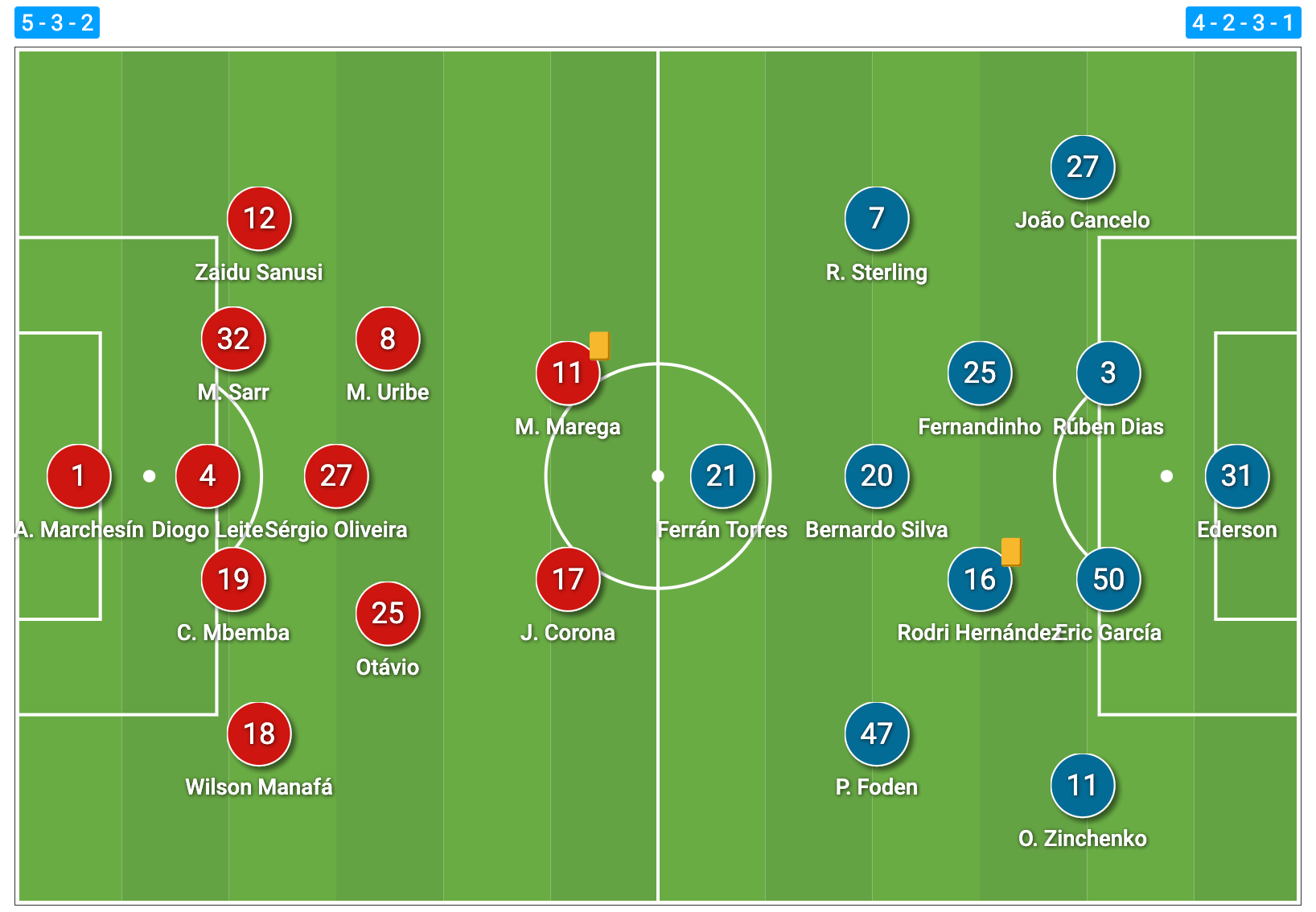 Sérgio Conceição sent Porto’s squad out in a 5-3-2 formation with Agustín Marchesín in goal. Their three centre-backs were Malang Sarr, Diogo Leite, and Chancel Mbemba. Zaidu Sanusi played as the left wing-back while Wilson Manafá played on the right, although both were hesitant to push forward. Porto’s three midfielders were Mateus Uribe, Sérgio Oliveira, and Otávio. Up top, Moussa Marega and Jesús Manuel Corona started as Porto’s strikers.

Pep Guardiola started City in a 4-2-3-1, although much of their possession saw them in a 2-3-5 or 3-2-5 structure. Ederson started in goal with Rúben Dias and Eric García as his centre-backs. João Cancelo started as right-back while Oleksandr Zinchenko started on the left side. The two holding midfielders were Rodri and Fernandinho with Bernardo Silva in front of them. Phil Foden started on the left flank while Raheem Sterling started on the right, and Ferran Torres started the match as their striker.

Man City often come up against teams who are willing to park the bus and commit men to their defensive duties. These squads have varying success against City, who can still put five past your club on a good day. Porto, however, were well-prepared and willing to work in order to prevent City from scoring. Their well-drilled 5-3-2 structure gave City plenty of space on the wing to operate resulting in a glut of crosses, particularly from the left flank. 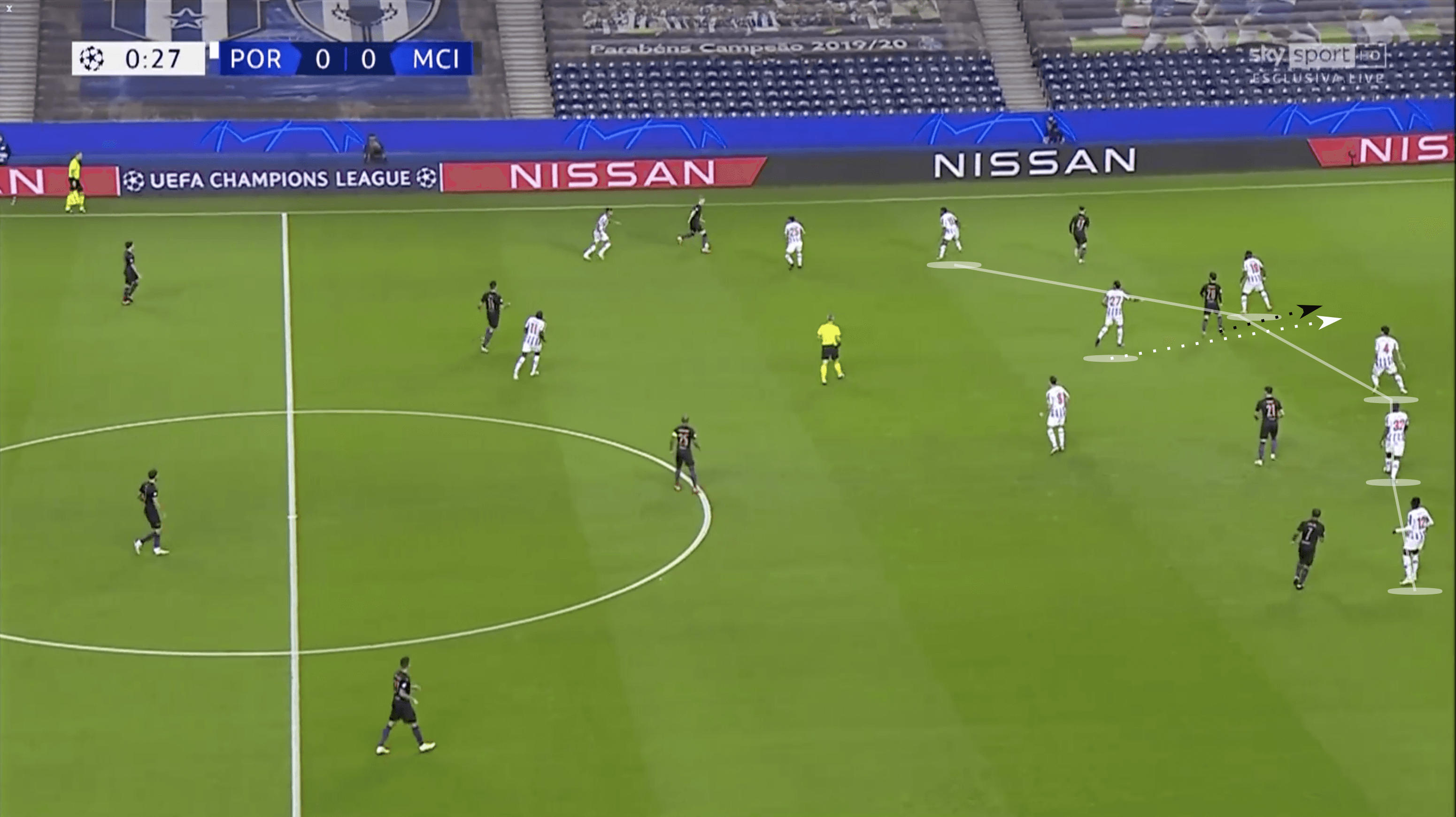 One of the key parts of this way to make sure they had numerical superiority in the centre of the pitch. Their defensive midfielder, Sérgio Oliveira, worked to follow central runs from City players. City often had four to five attackers on the line with Porto, looking to confuse them and force defenders to make decisions upon who to mark. This makes runs from deep even more dangerous because the run from a City player would add additional pressure to the defender. To negate this, Porto made sure to drop Oliveira with any of the runners, as shown above. This ensured that Porto maintained their superiority and defenders didn’t have to have additional decision-making put upon them.

Oliveira also frequently dropped down to form a back six. This allowed for the numerical advantage to continue to exist, with players able to defend in wider areas as a result of his presence. 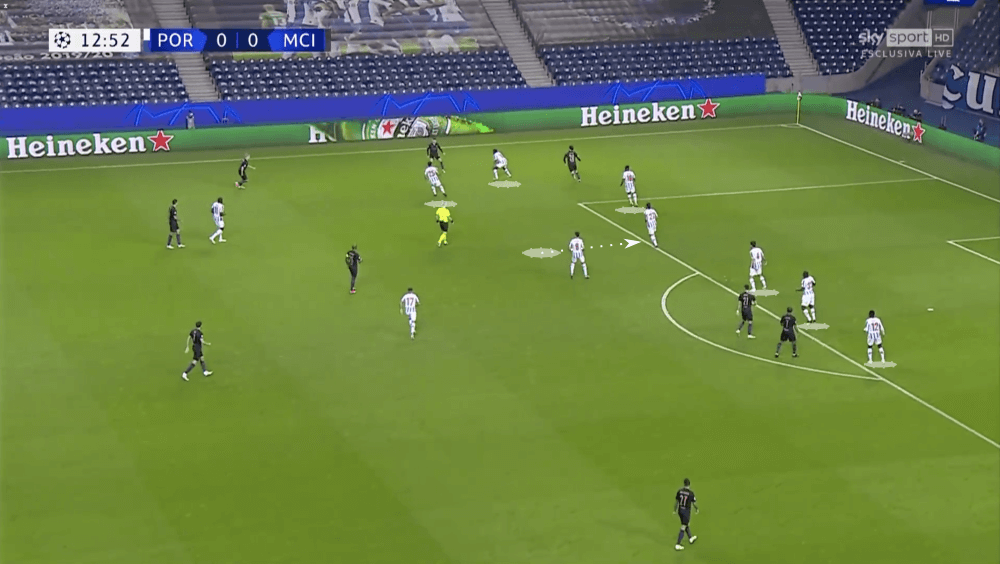 In the image above, Oliveira had dropped down in order to occupy the space that had opened up in the backline. This positioning is much better than the original, which would have seen him standing in his own teammate’s cover shadow. This movement allows Porto to have two numerical overloads: one on the ball and one in the centre of the pitch. City attempted to play through these, but Porto’s numerical advantage frustrated them for most of the match. The result would be City going back to their defenders or defensive midfielders and look to switch play to the other flank.

This defensive structure from Porto caused City to rely on crossing more than they would have liked. These crosses, whether coming from the wing or inside the penalty area, were often well-defended by Porto, and this was because they defended at multiple heights in the box. 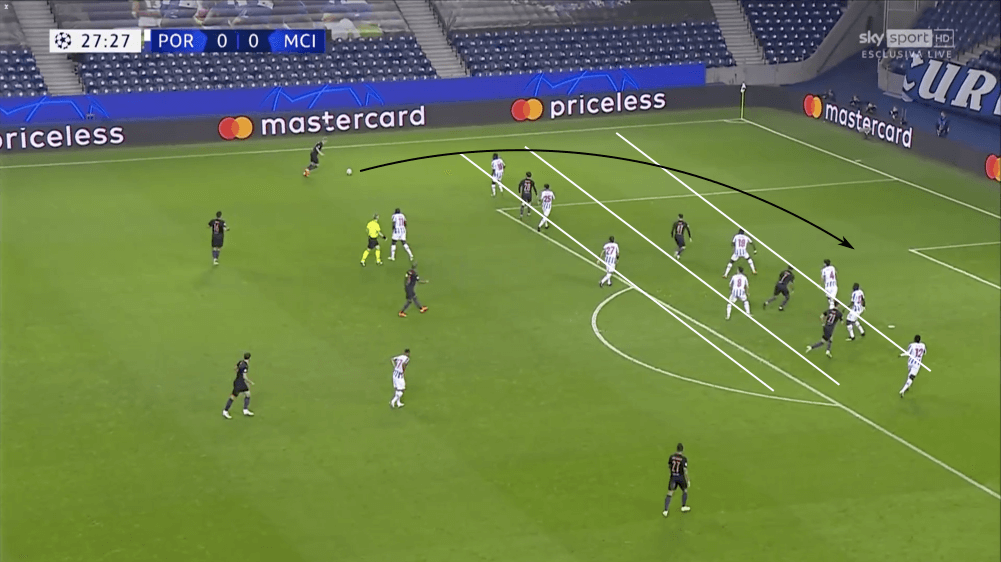 As the ball came in, Porto found their compact shape, with three City players wedged in between six Porto players. Not only did they have a numerical advantage, but Porto also had a positional advantage. Their backline was even with the City players, preventing any passes behind them from getting through. Uribe had dropped to make sure that he was close behind the City players, preventing any passes from coming in behind. Higher up the pitch than Uribe was Oliveira and Otávio, who prevented any potential balls into a run from deep from the City players. This structure made these City crosses easy to turn away, but it also invited City’s constant pressure.

City try to pull Porto up the pitch

Man City knew that Porto would sit deep, especially under the qualifying circumstances that meant Porto had a good chance of advancing to the knockout rounds if they could find a point. Being the aggressors that they often are, City knew that much of the match they would have to find ways through the aforementioned 5-3-2. One aspect of positional play is to move your opponent so that you can exploit the space that they vacate. City looked to do just that any time Porto stepped higher up the pitch. While none of them were successful, the manipulation of their opponent led to some of City’s best chances of the evening. 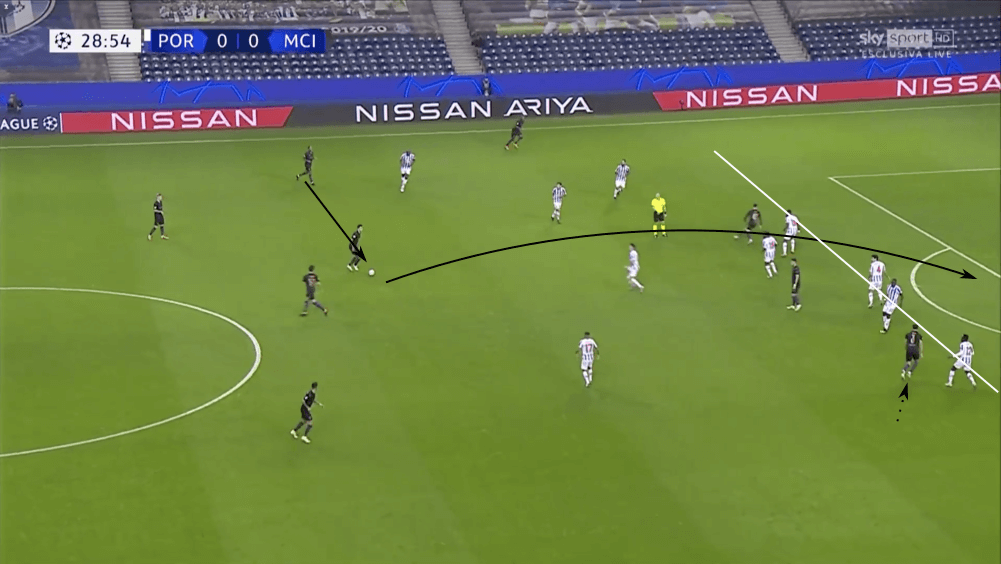 After a City corner kick, Porto stepped forward to close down the space. Sterling’s pass found its way to Rodri, who was open in space. This lack of pressure on a City central midfielder became a common theme, which allowed City to continue to play these dangerous passes. Due to Porto’s high line, City had enough room to use some of their pacier players to get in behind the defence. Rúben Dias’s run towards the centre of the pitch dragged the defender with him. Not pictured in the image is Bernardo Silva, who was even farther to the right of Dias and the defender.  Rodri’s pass was a little long, but it was still able to find Silva, who was ultimately judged to have been offside.

Minutes later, a similar situation occurred, although this time it stemmed from a successful City build-up. Porto kept their compact defensive structure, which allowed Fernandinho to dribble the ball forward without really being put under any pressure. As he did, he scanned the pitch. 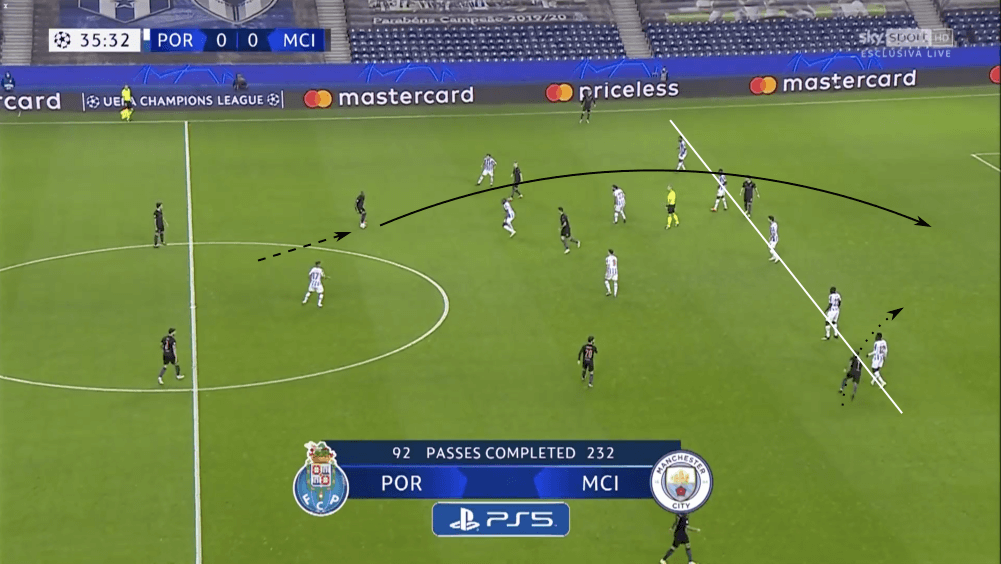 As he and Sterling made eye-contact, Fernandinho cut the ball back, cueing Sterling to begin his run. Despite the delivery being just a half-second late, Sterling was still able to get behind the defence. He would have certainly gotten a shot off if the pass was a little bit earlier, but in this case, a Porto defender was able to get his foot in and clear it for a corner. The high backline without midfield pressure would cause Porto problems, and so they often dropped even deeper in order to eliminate these possibilities.

Porto were almost punished in the second half after sending a hopeful ball forward. The Porto players rushed forward, but almost immediately lost possession of the ball. This led to the picture shown below. 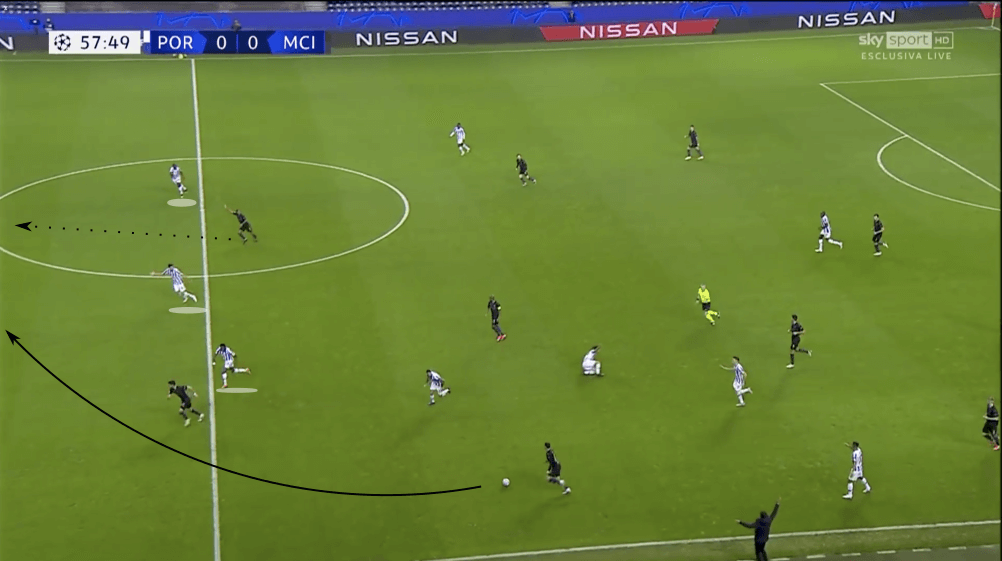 Porto only had three men back who could defend at the moment. The loss of possession while still committing men forward exposed them at the back, and City looked to exploit this. Foden did well to curl a pass up the pitch into the path of Sterling. Sterling was initially behind Sarr, but he sped around him and got in front of him, effectively sealing him off from the play. Luckily for Porto, Agustín Marchesín stepped forward to close down the angle, and he made the ensuing save to keep Man City off of the scoreboard.

Phil Foden hasn’t had the most successful of seasons, but his play in this match was a notch above his teammates. Despite not contributing on the scoresheet via an assist or goal, Foden provided a lot of the opportunities with his movement and positioning. 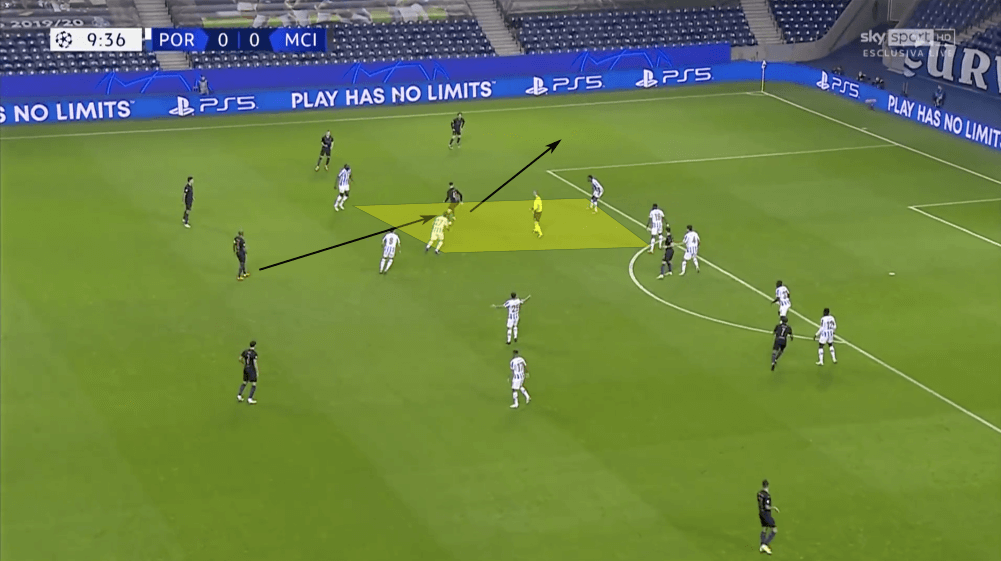 The first example highlights Foden receiving within the half-space so that he can turn and deliver a pass. His reception in this area is so important because it freezes defenders who are behind him from moving elsewhere. This allows Silva’s run to occur because the opposing right wing-back can’t pick him up due. This is because Foden could technically turn and dribble at goal. Foden’s body shape is also important: by turning as he received the pass, he was able to play the ball forward as opposed to turning with the ball at his feet. City didn’t often find Foden in this position, although he was constantly buzzing around in the half-space as a potential passing option for Rodri and Fernandinho.

While Foden started in the half-space, he would often vacate it in order to support build-up on the left wing. Just before the image below, Foden made a blind-side run behind the defender from the half-space, seemingly ‘popping up’ on the wing. 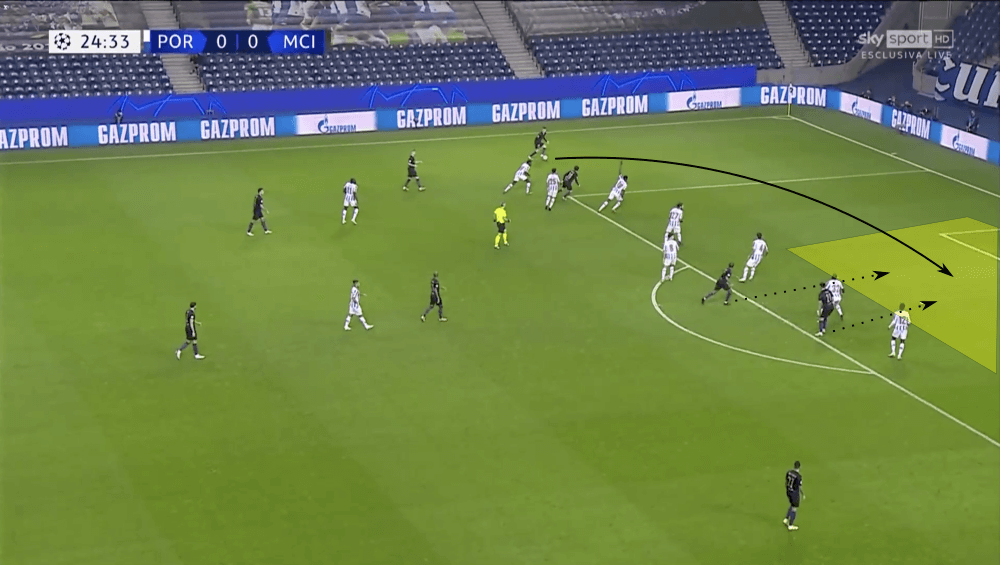 As he received the ball, Foden made sure to keep his head up, scanning for passing options. He recognised that Porto’s backline had allowed for a little bit of space to open up. This meant that as they retreated, they would be facing their own goal, making it quite difficult for them to keep track of both the ball and the man that they were marking. Foden misplayed his cross, but his recognition of the defensive pressure was excellent. It’s the same recognition he used to play the previously-discussed pass into Sterling, who should have scored.

Foden’s recognition of space and the use of his speed made him a threat in transition as well. He delivered a well-timed curled pass to Torres who was ultimately judged to have been offside (he also missed the shot). On top of this, when in possession in the middle third, Foden made runs in behind, almost scoring off of a wonderful aerial pass from Fernandinho in the 62nd minute. Despite not having his best outing, Phil Foden definitely highlighted why City fans should be excited for years to come. Under Guardiola’s tutelage, Foden will continue to develop for City.

Porto looked to hit City on the counter and off of set-pieces, but they were unable to find the opportunity to make the most of those rare chances. While City will be disheartened that they couldn’t maintain their winning streak, they’ll be happy to go through to the knockout round at the top of their group. City’s next match will be in the EPL against Fulham on Saturday. Porto’s next match is also on Saturday against Tondela.