Club Brugge hosted Zenit St Petersburg in the UEFA Champions League in what was an important game for both sides. Belgian Pro League champions Brugge had the chance to guarantee a place in the Europa League at the least, while Zenit had to win in order to keep alive their hopes of qualifying for Europe’s second tier competition. In the end, it was Brugge who were comfortable winners, scoring three goals and keeping a clean sheet in the process.

This tactical analysis will look at how Brugge’s transition game and willingness to get men behind the ball helped them to take the lead. The analysis will also look at how Zenit got their tactics wrong, as well as the importance of Eder Balanta to how Brugge were able to win the game. 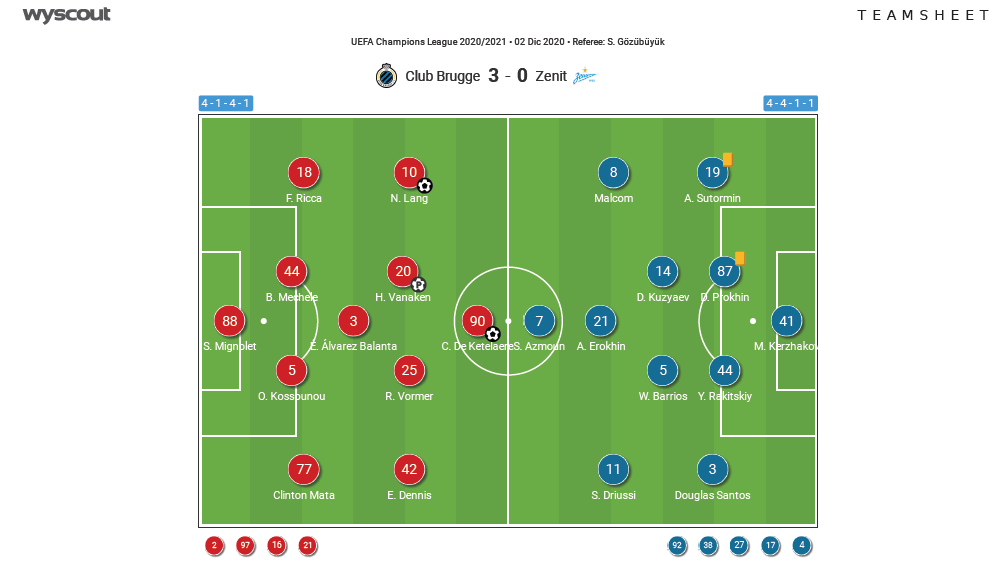 Phillipe Clement went for a 4-1-4-1 formation, with former Liverpool keeper Simon Mignolet between the posts. Clinton Mata and Frederico Ricca were the full-backs, with Odion Kossounou and Brandon Mechele as the centre-backs. Eder Balanta was the deepest of the three central players, with Ruud Vormer and Hans Vanaken playing further forward. Emmanuel Dennis and Noa Lang were the wingers, while the man who bagged the winner in the reverse fixture, Charles de Ketelaere, was the lone striker.

For Zenit, coach Sergei Semak went with a 4-4-1-1 formation, with Mikhail Kerzhakov in goal. Douglas Santos and Aleksei Sutormin were the full-backs, while Yaroslav Rakitskiy and Danila Prokhin were the centre-backs. Wilmar Barrios partnered Aleksandr Yerokhin, while Daler Kuzyayev played ahead of them in central midfield. Malcom and Sebastian Druissi were the wide players looking to support Sardar Azmoun, who was upfront.

While Brugge enjoyed a reasonable amount of possession in the first half, they struggled to really create chances, perhaps due to the lack of a focal striker. De Ketelaere is still young and developing, but hasn’t really featured as a striker in the domestic league for Brugge. However, where he was at his best was when Brugge countered against Zenit.

In order to create these situations, Brugge decided to get the majority of their players back when defending, looking to suck Zenit into them, and then used the pace of Lang and Dennis on the wings, alongside the technical ability of de Ketelaere as a dribbler and passer, to exploit Zenit. This was also a ploy in defence to limit the space for Zenit’s more creative players, such as Malcom.

It was this tactic in the first half which led to the opening goal. As we see in the image below, their entire team is in the Brugge half. This has enticed the Zenit defenders to push forward, as they have the entire Brugge team in front of them. There is plenty of space in behind the defence that a quick Brugge counter could exploit. 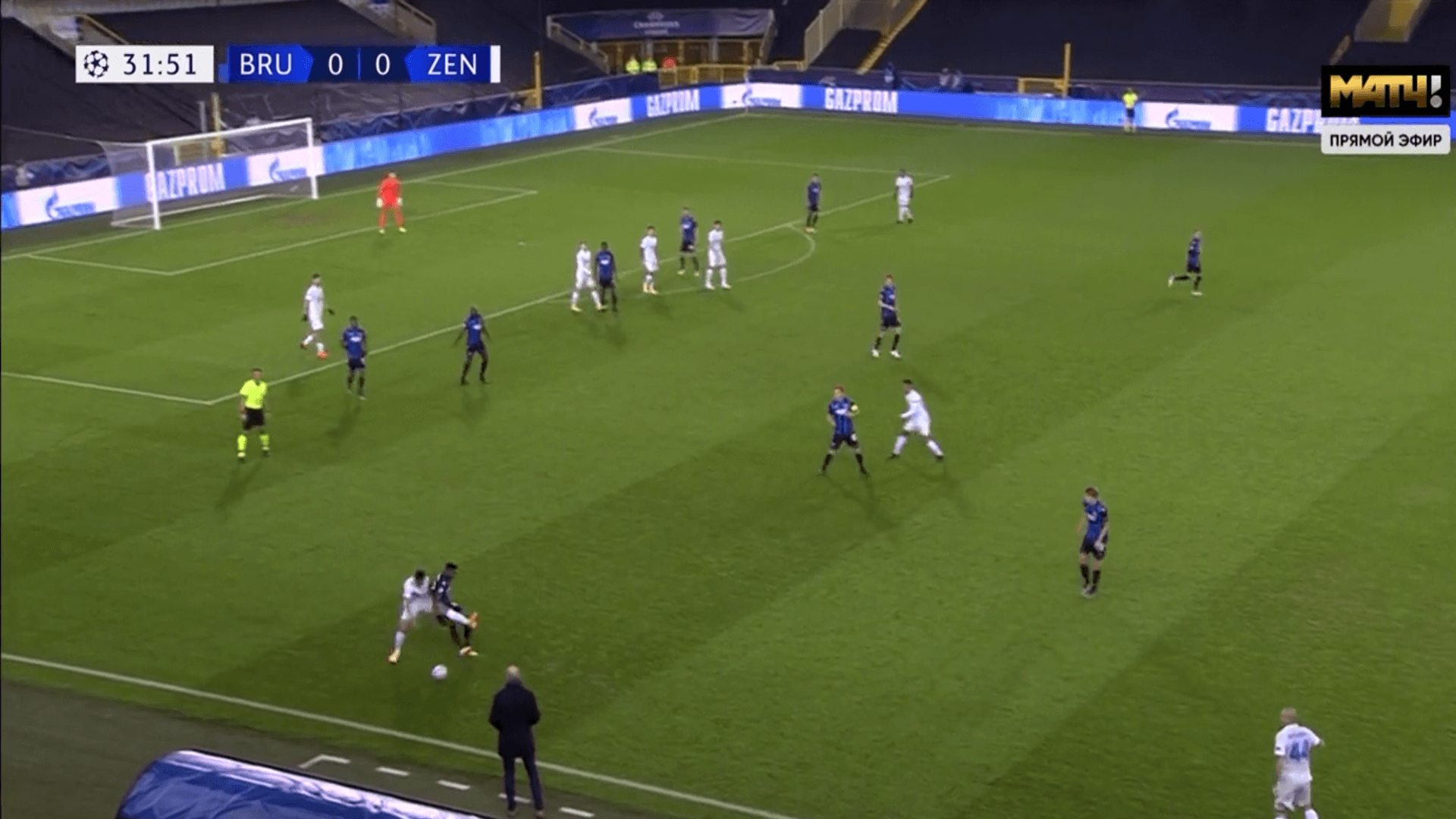 De Ketelaere dropping this deep means he can get on the ball without having to get into a physical battle with the Zenit defenders, which he had been losing most of during the game. As we see below, he drags a defender with him and is able to play the one-two. Eight Zenit players are in the frame, meaning there are only two back. 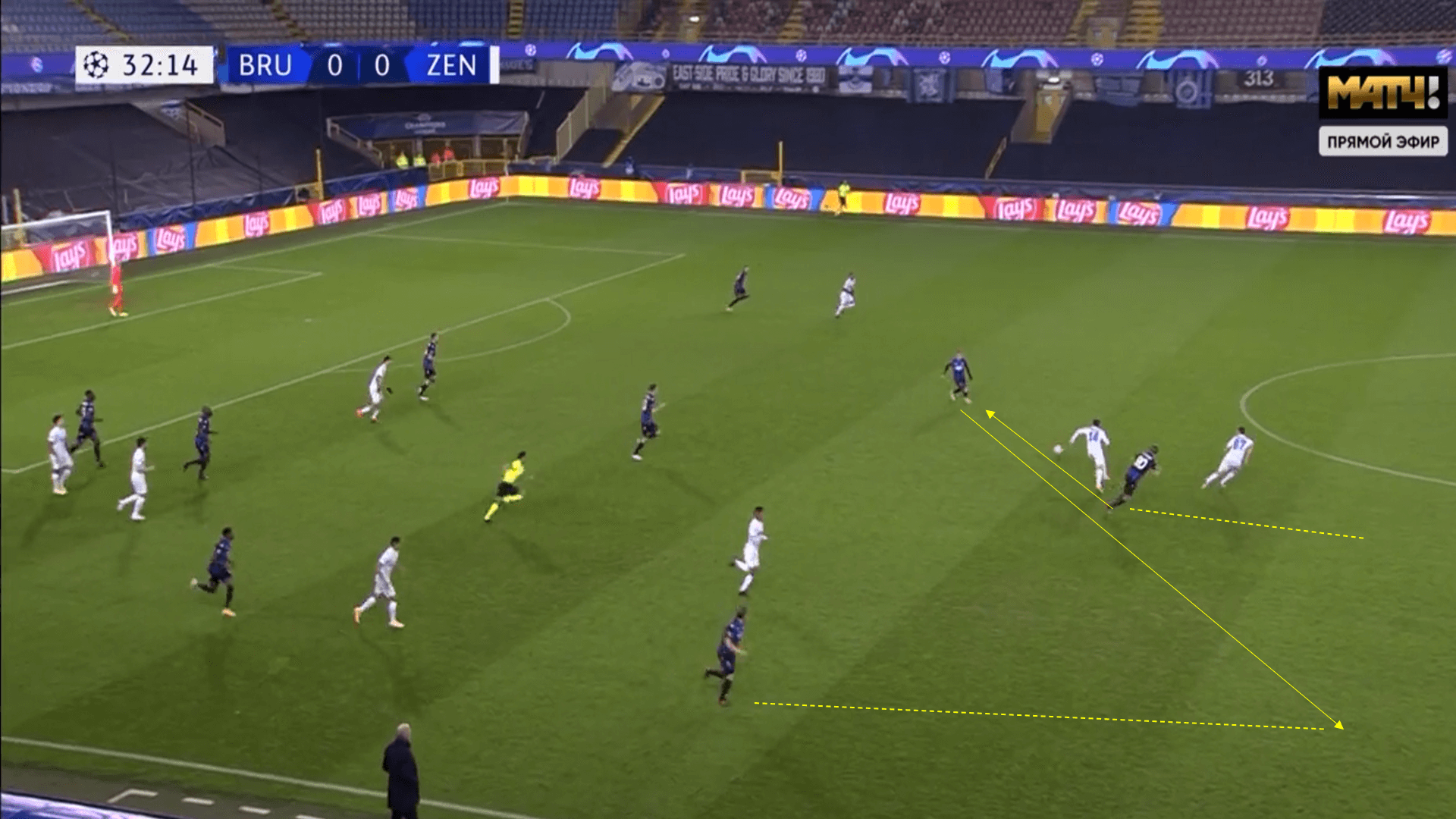 This tactic also allowed Brugge to catch Zenit out of position. As we see in the below image, while Zenit have got their back four in position, their midfield isn’t, and there is an overload on the left-hand side. Again, de Ketelaere is on the ball, having dropped off from the defenders to operate in space. He is able to find the pass out wide to Lang. Lang then finds Ricca, whose cross eventually falls to de Ketelaere in the box, and he puts his side ahead. 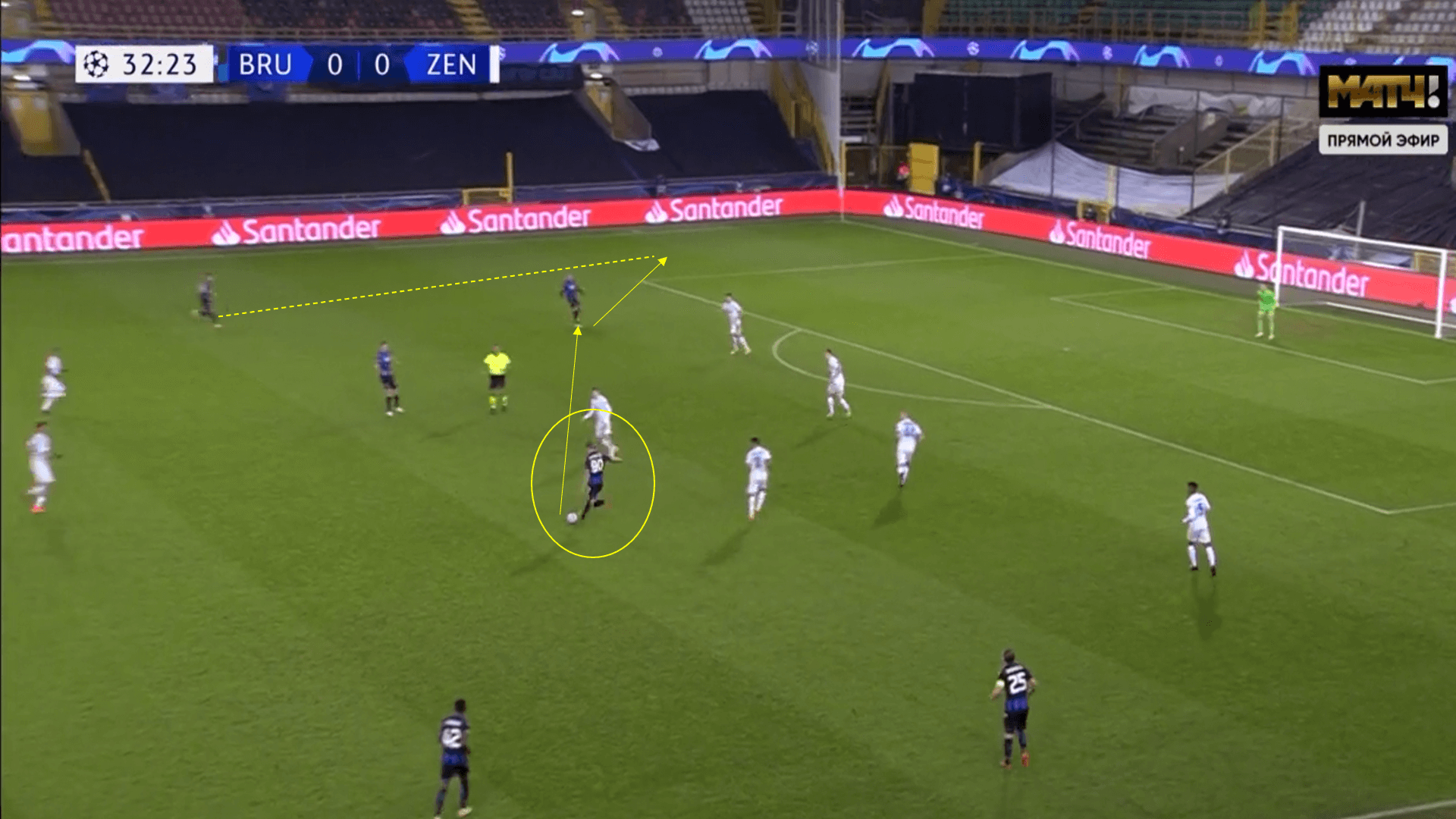 Zenit struggled all evening to create chances, and one of the most notable reasons for this was the isolation of their striker Azmoun. Zenit usually have two upfront, with Artem Dzubya and Azmoun together at the top, playing off each other and helping the side to be direct with their play. However, without his strike partner, Azmoun and Zenit really struggled to trouble the Brugge defence.

One of their problems was the gap between the front players and the midfield, which appeared when Zenit had the ball at the back. As mentioned previously, when Zenit made it into their half, Brugge were happy to drop everyone back. However, when Zenit had the ball in their half, the hosts would push forward, as we see below. Brugge have closed the passing lanes for the Zenit defender, and he has to go direct. However, by pushing forward, Brugge have left a gap in the middle of the pitch, as we can see below. 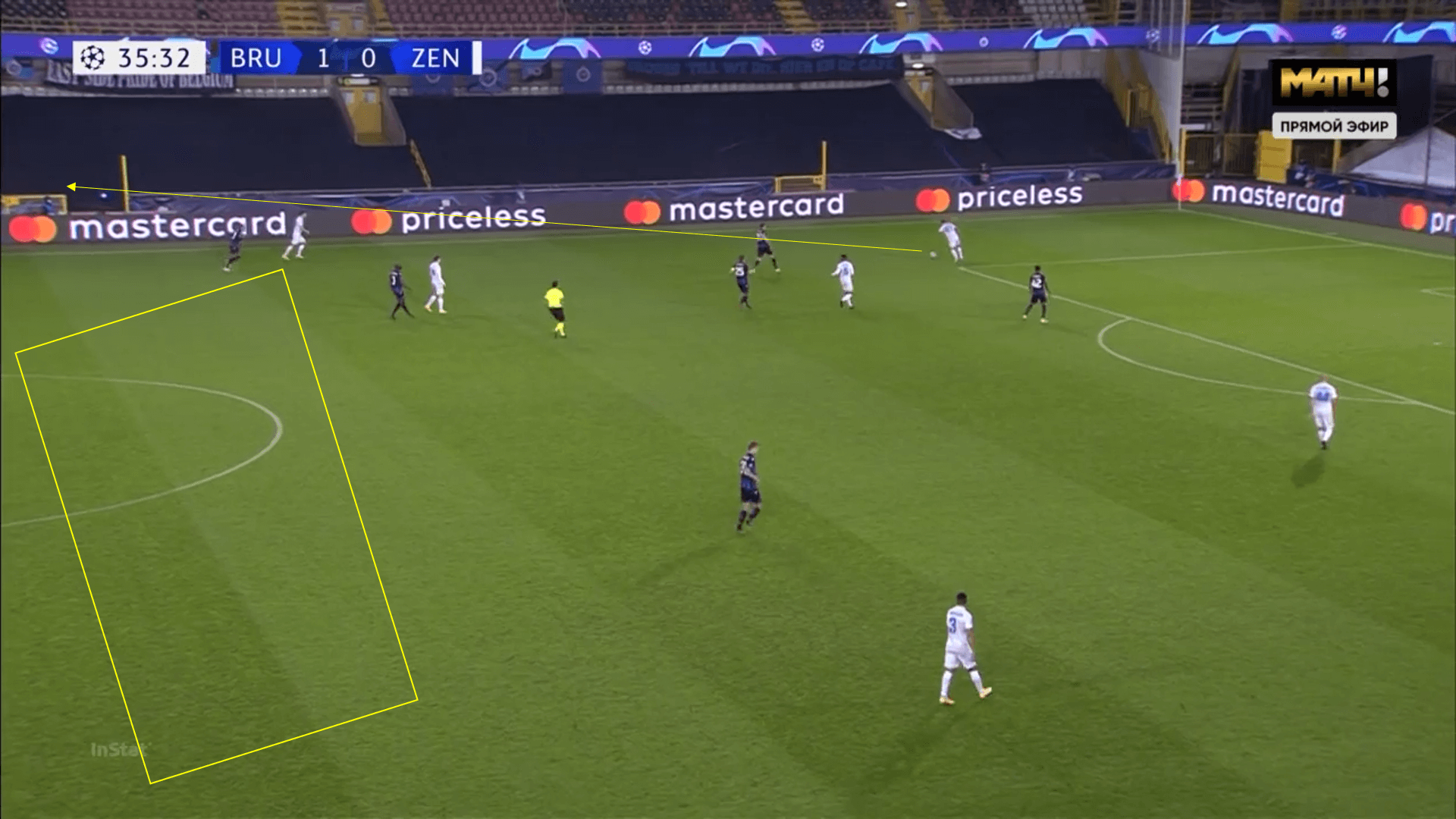 However, there is no-one in that gap for Zenit to look for, with the forwards remaining high up the pitch. Therefore, the defender has to try and play the ball to these forward players, which proved to be easy for the Brugge defence to deal with. As we see below, there is the gap mentioned above, but the Brugge defence doesn’t have to worry about anyone in there, because the only player in the gap is Balanta. 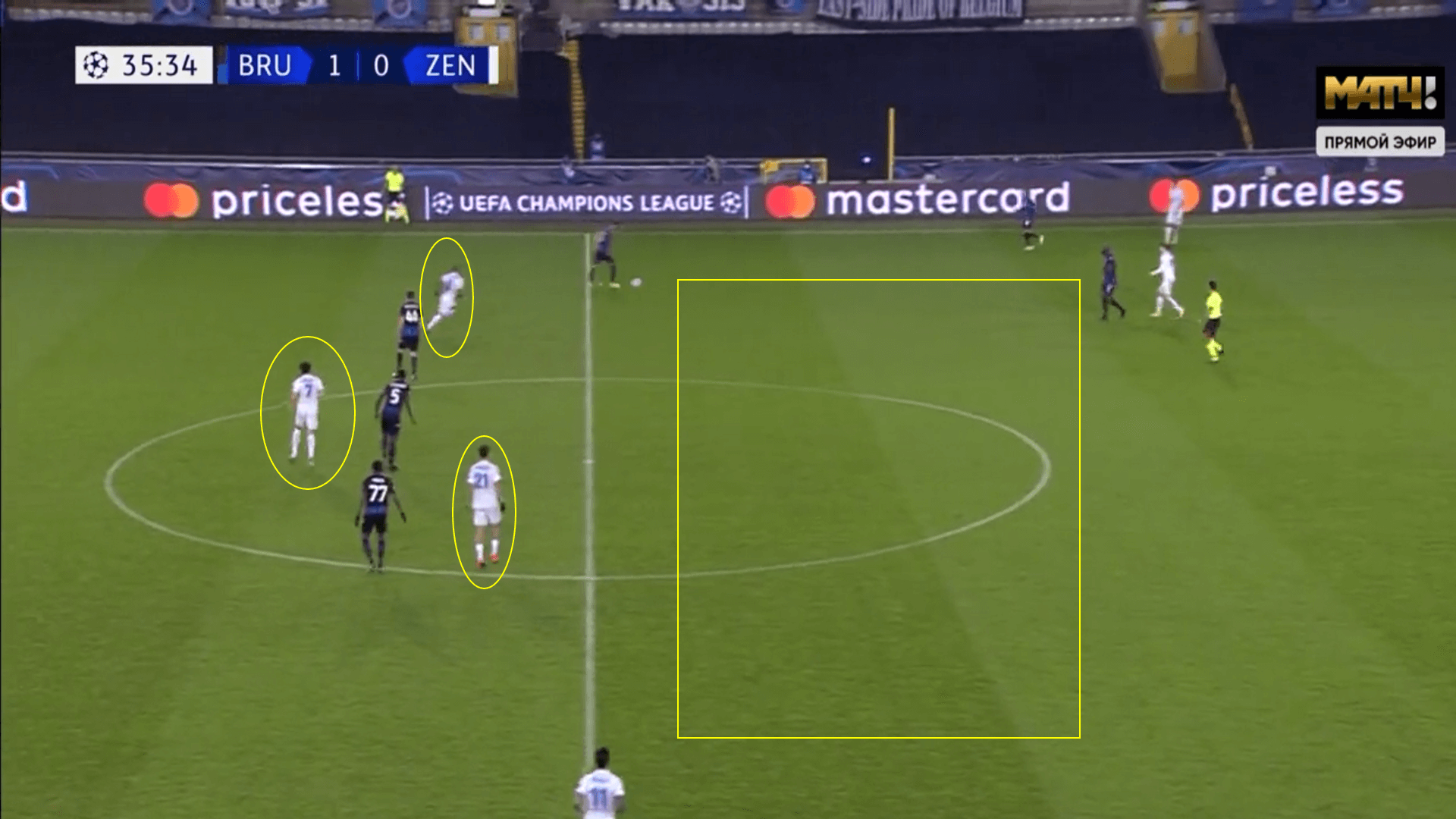 In the second half, Zenit did briefly begin to play with better pace and purpose, stringing together a few more attacks, which led to a goal that was disallowed due to handball. However, outside of this, they really struggled to put the Brugge defence and Mignolet in goal under much pressure.

While there were many impressive performances for the hosts, it was the play of Balanta in midfield which really allowed them to win the game. He was a factor defensively and at the other end, either supporting the play of others or giving both Vanaken and Vormer more freedom in their play.

His ability to read danger and cover for his teammates helped stifle Zenit and release the pressure on his side. As we see below, he is initially in the central areas, where we would expect a defensive midfielder to be in this situation. However, the left-back Ricca has a Zenit player on him, while Lang has pushed forward to put pressure on the ball. This has left a gap in behind Lang where, if a ball went into it, Ricca would be unable to attack the ball, due to marking one of the attackers. 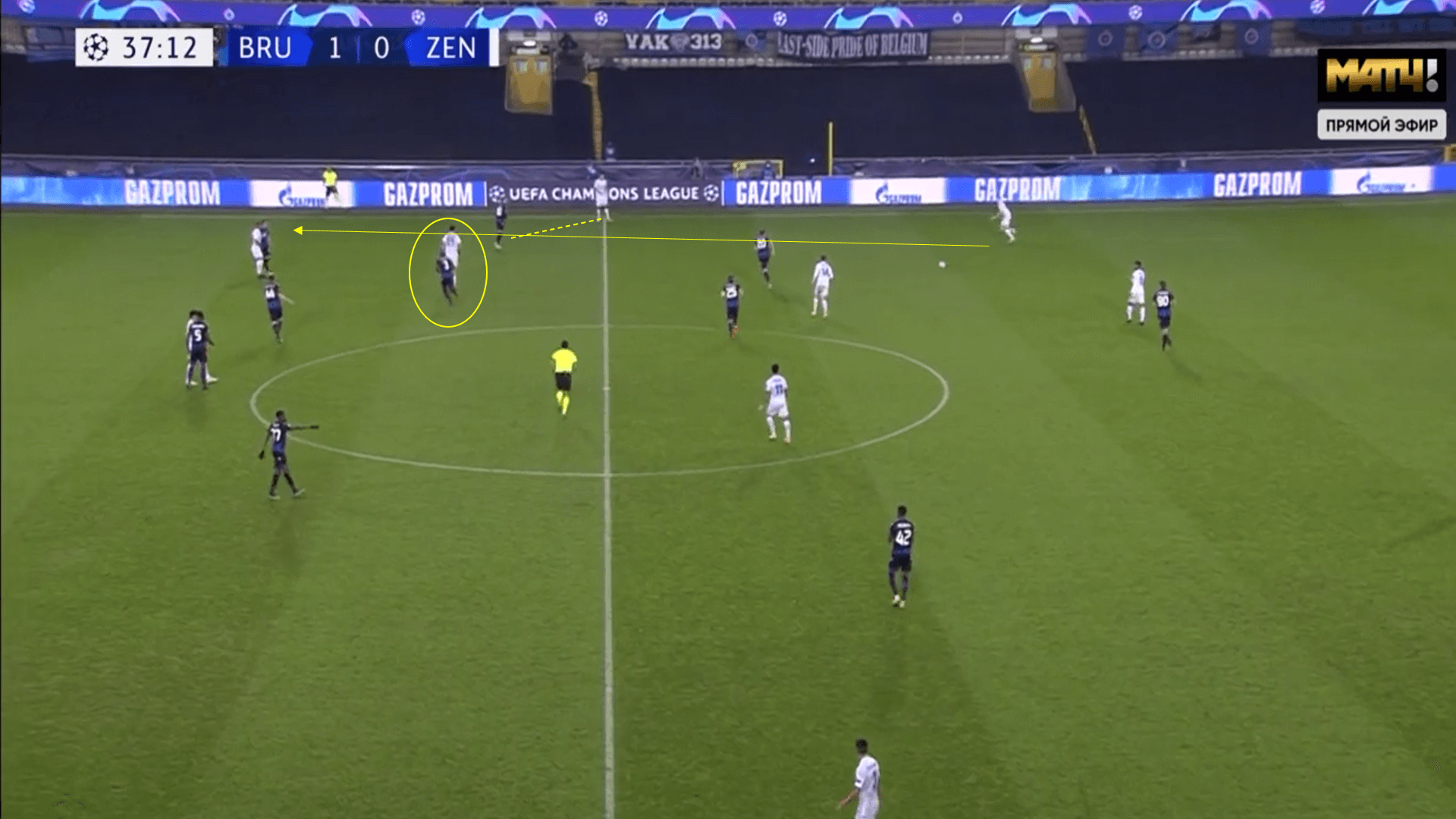 Balanta realises the danger and acts accordingly, coming across to cover and deal with the danger. This example was a constant feature of his play, as he was able to read dangerous attacks and stop them from leading to goalscoring opportunities. 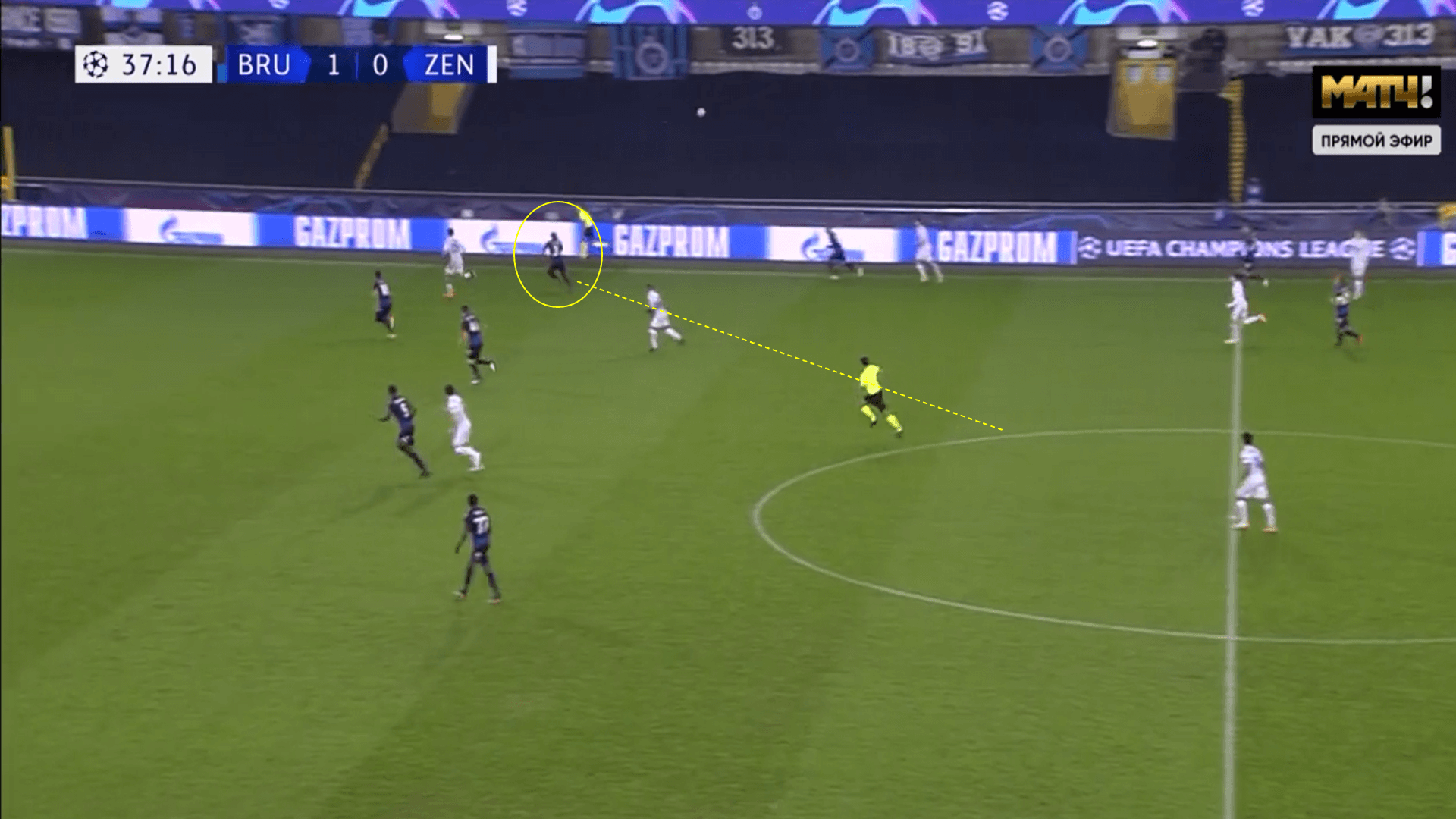 To reiterate the point, later in the second half, we see him again reading the danger and covering for Mata at right-back, making sure there wasn’t any space for Zenit to work with out wide. 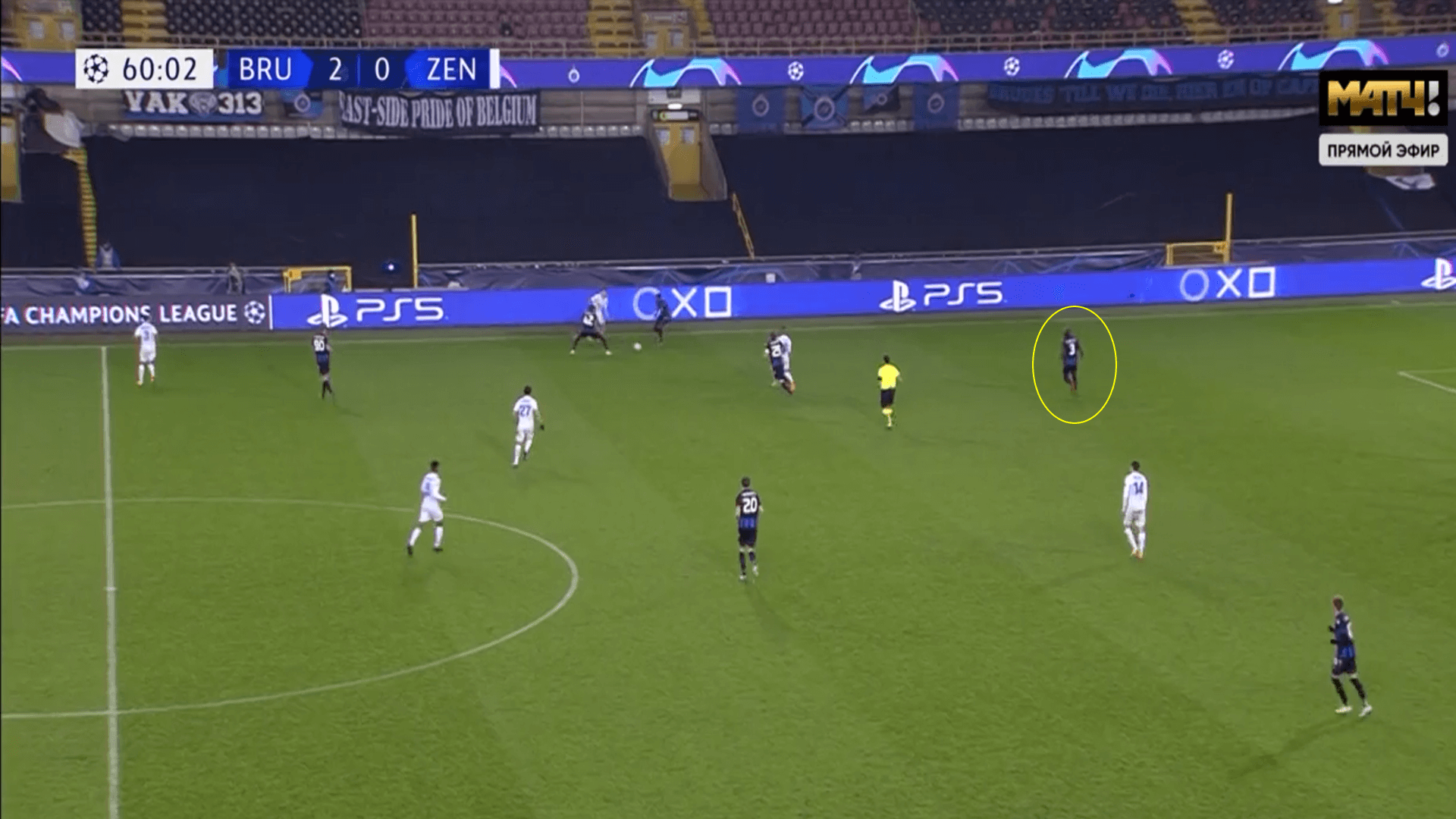 Just seconds later, we see how he has gone from right-back to left-back, this time covering space on the opposite side of the pitch. This footballing intelligence and willingness to work for the side really helped Brugge keep their clean sheet, and also restricted the opportunities for Zenit to take advantage of any mistakes from the home side’s defenders, as Balanta was there to cover. 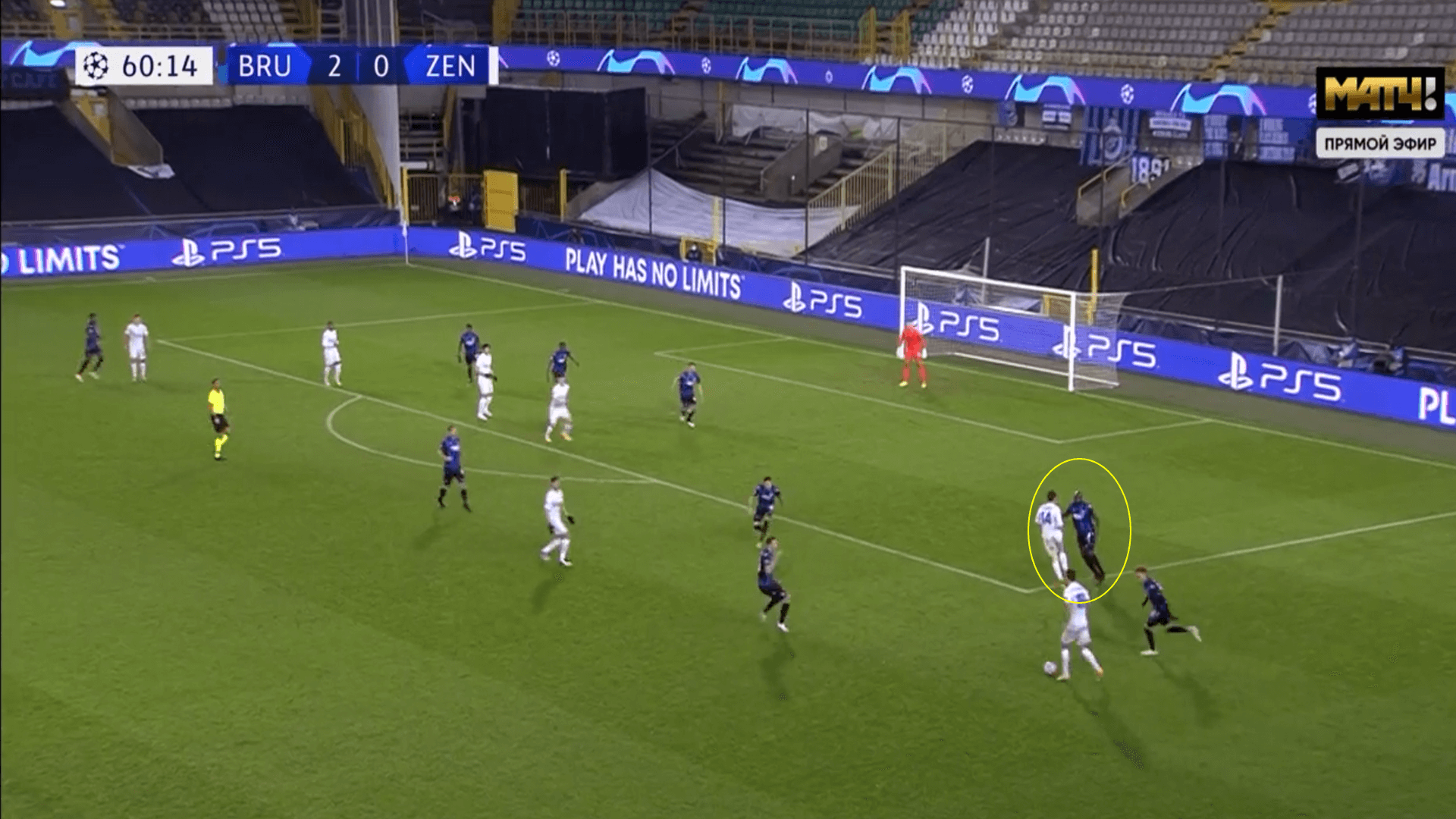 In what was a must-win game for both sides, it was Club Brugge who looked to be the side wanting it more on the day. They were tactically superior to Zenit, thanks largely to the play of Balanta, who was able to stifle Zenit attacks constantly throughout the game. Brugge will now have a “winner takes all” match with Lazio next week to decide who will make it through to the knockout stages.