Borussia Dortmund traveled to Bruges to take on Club Brugge in the UEFA Champions League on Wednesday. The Dortmund attack swarmed all over Brugge early, scoring three in a span of 18 minutes, securing the three points in the process. 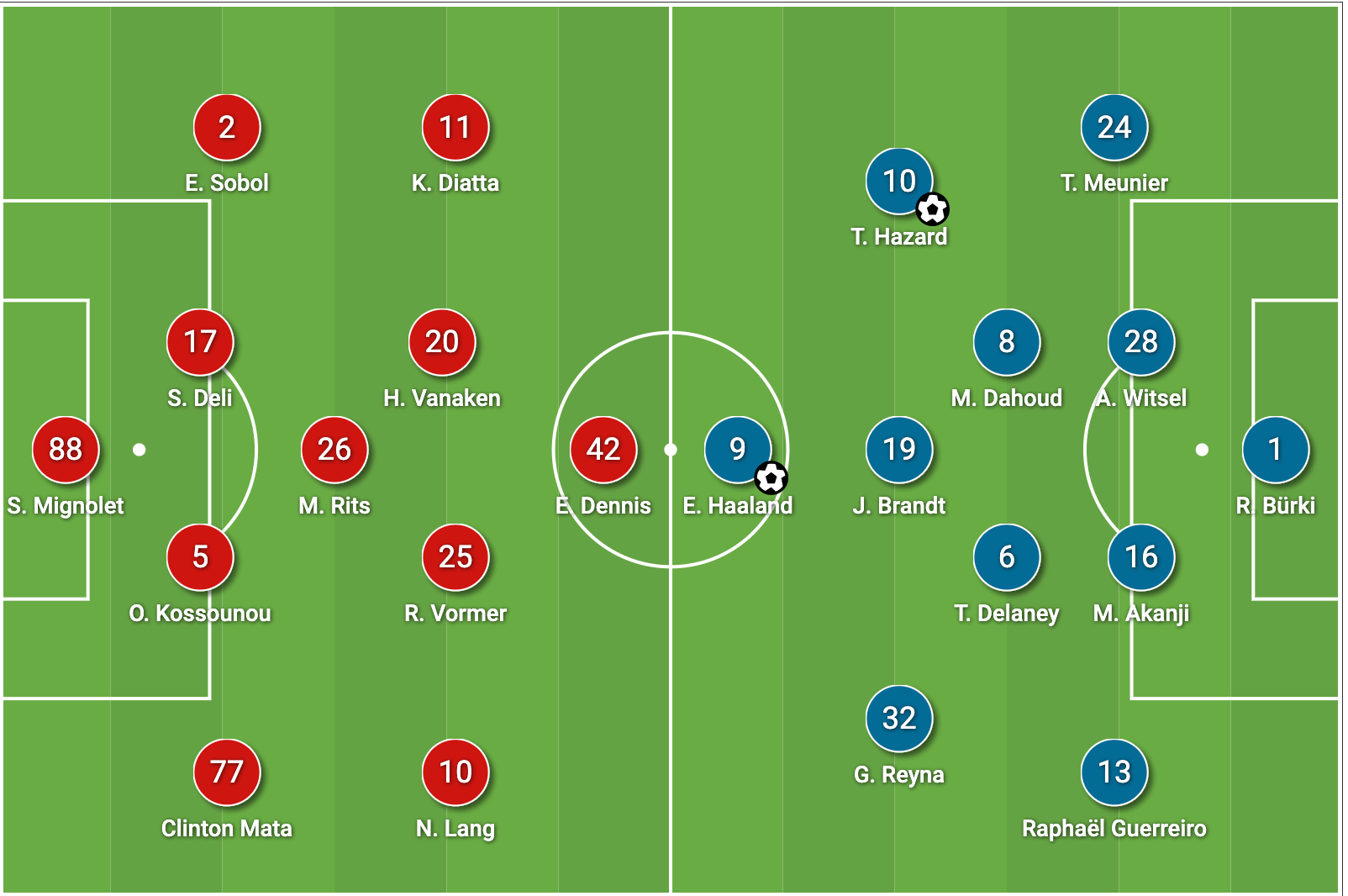 Clement sent his squad out in a 4-1-4-1 formation with Simon Mignolet in goal. Their centre-backs were Simon Deli and Odilon Kossounou with Eduard Sobol to the left and Clinton Mata to their right. Mats Rits worked between the two lines and had Hans Vanaken and Ruud Vormer in front of him. Krépin Diatta started as the left winger while Noa Lang started on the right side. Their striker for the evening was Emmanuel Dennis.

While the image reflects a 4-2-3-1, Lucien Favre’s Dortmund played more in a 4-3-3 with some movement from Julian Brandt occasionally dropping in centrally. Roman Bürki was the goalkeeper with Raphaël Guerreiro, Manuel Akanji, Axel Witsel, and Thomas Meunier (formerly of PSG) in front of him. Thomas Delaney, Mahmoud Dahoud, and Gio Reyna started in the centre of the park. Brandt, Erling Haaland, and Thorgan Hazard started as the front three.

Brugge set out to frustrate Dortmund’s build-up by committing men forward and pressing in a fairly man-oriented fashion. Unfortunately for Brugge, they were not the most organised side on the pitch, and they struggled to contain Dortmund as a result. 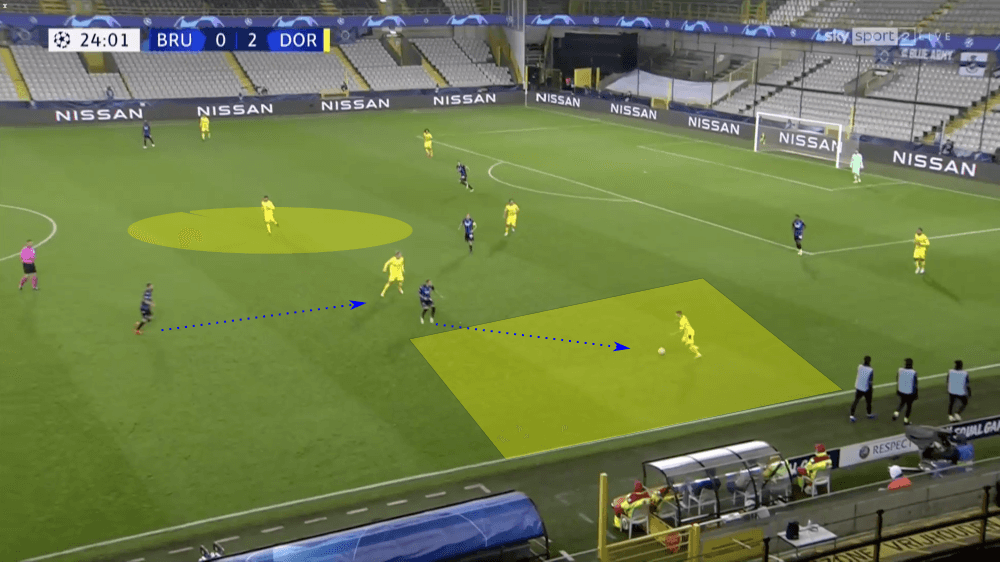 In the image above, Julian Brandt had dropped down to support the build-up. As a result of this, the Brugge defenders had to make sure he was marked. However, as Lang was preventing him from receiving a pass with his cover shadow, he had allowed Guerreiro to receive the ball in a large amount of space. Lang was too far away from Guerreiro to actually properly put him under pressure. As Lang went to press Guerreiro, Vormer moved to close down Brandt. This left Dahoud wide open in the space on the other side. Guerreiro easily found him with a diagonal ball, and Dortmund had quickly broken through the press as a result.

Brugge also got pulled into small spaces in large numbers as a result of following the man that each player was supposed to be marking. THis became a problem because it opened up room higher up the pitch for players like Erling Haaland to receive the ball in space. 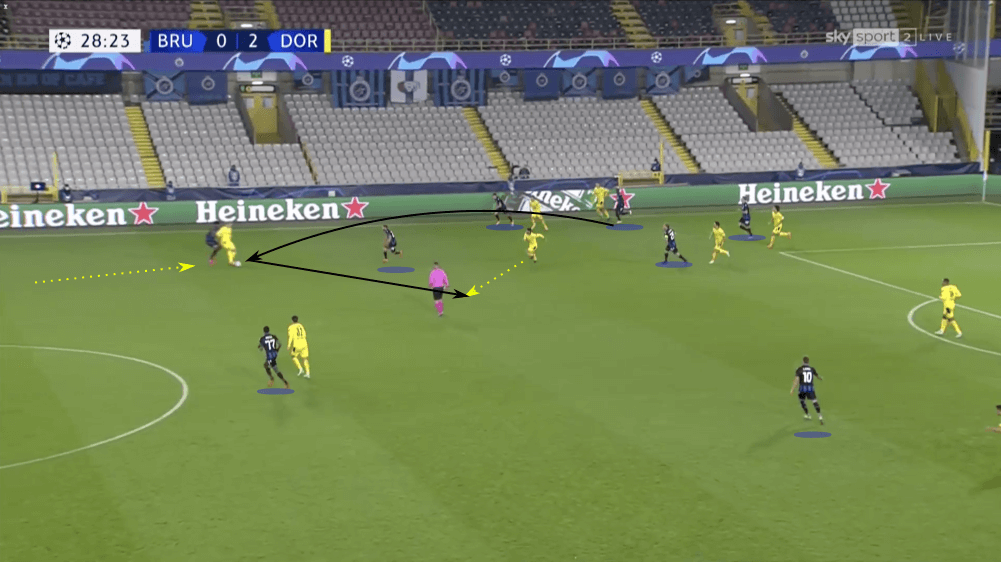 An example of this is shown above. Brugge committed seven players high up the pitch, with five of those players occupying the left flank as they defended against Dortmund. This meant that there would certainly be large spaces left open to be exploited. Dortmund did well to open up the play with a third man pass. These are particularly effective against man-marking systems because defenders (almost all of them) tend to watch the ball as it’s passed and drift toward that general direction. If a player, in this case Dahoud, moves in the opposite direction, he can usually find space to receive the ball, which is exactly what happened. The entire left flank was exposed, allowing Guerreiro and Reyna to run into that space in a 2v1 scenario.

Even when pressing with fewer numbers and being slightly more organised, Brugge still struggled to cover men in the centre of the pitch. As a result, Dortmund had no problem finding the free man and progressing forward. 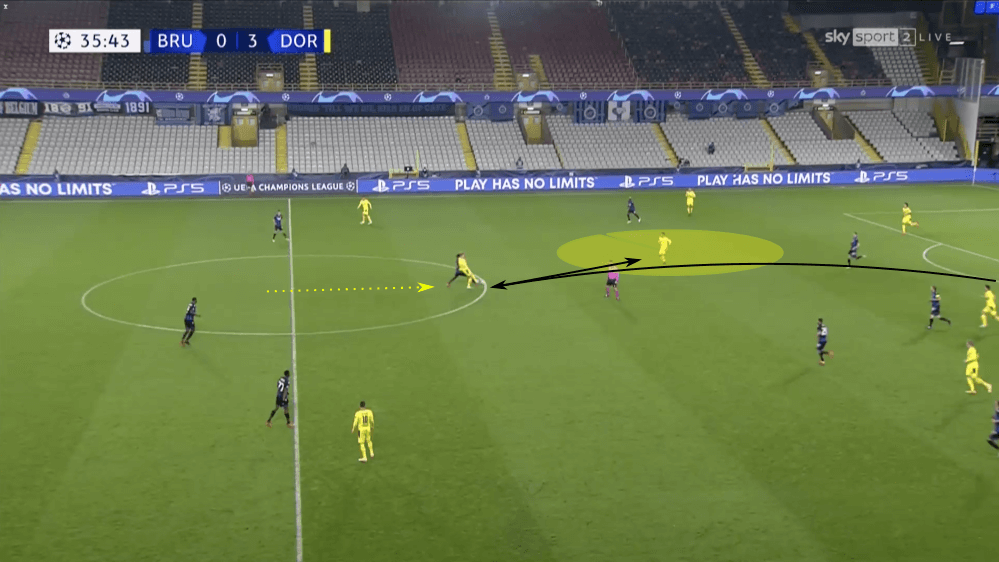 This move started with Dortmund progressing the ball from right to left on the back line. Akanji, who was incredibly useful for them in this match with his left foot, recognised how much space was available in the central corridor. Haaland used his strength to hold off his defender and a deft first touch sent the ball to Dahoud, who had enough time and space to settle the ball, dribble, and then spray a pass out to Reyna on the right side for Dortmund to once again attack.

The use of Brandt dropping in really continued to cause a lot of problems for Brugge, even when they set up in their midblock. His presence created a numerical overload that they were not prepared to handle. 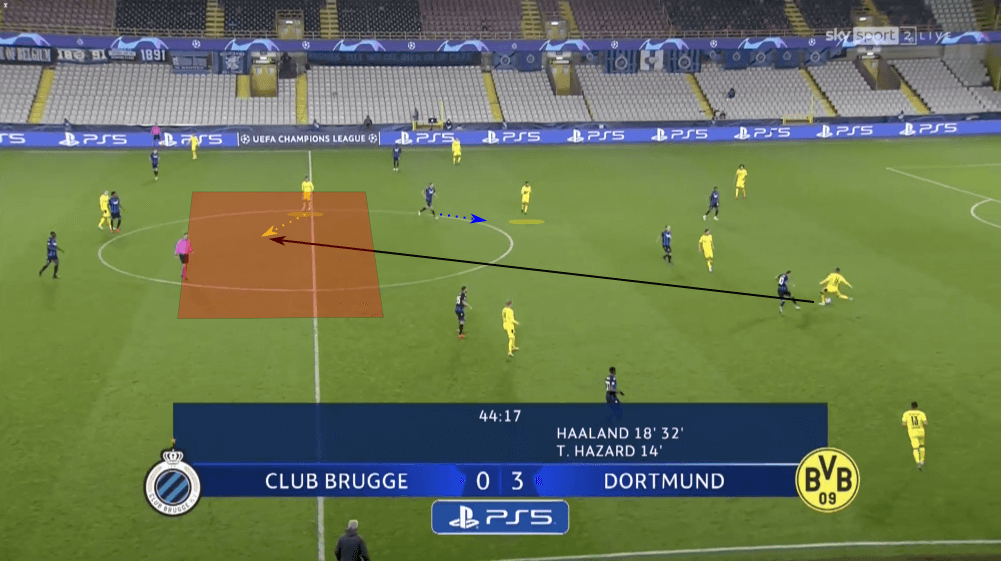 Here, Brandt dropped down towards Akanji in the same half-space as him. He was picked up by Rits, Brugge’s defensive midfielder. This allowed Dahoud and Reyna to create a 2v1 on their near defender. Reyna made a run behind the defender towards his blidn angle as he pressed Dahoud, and he was able to easily receive a pass between the lines of pressure. While his final ball wasn’t perfect, Reyna was still able to take advantage of Brugge’s man-marking defending.

Dortmund look to play through the half-space

When in possession higher up the pitch, Dortmund looked to take advantage of some of the lack of defensive organisation by making sure to play through the half-space. This positional advantage seemed to work as it moved Brugge defenders and allowed for space to open up elsewhere, which Dortmund then looked to exploit.

For their first goal, Dortmund did well to manipulate their opponent in the half-space. As Dortmund was in possession, Reyna slid between two defenders as Guerreiro found himself on the ball. 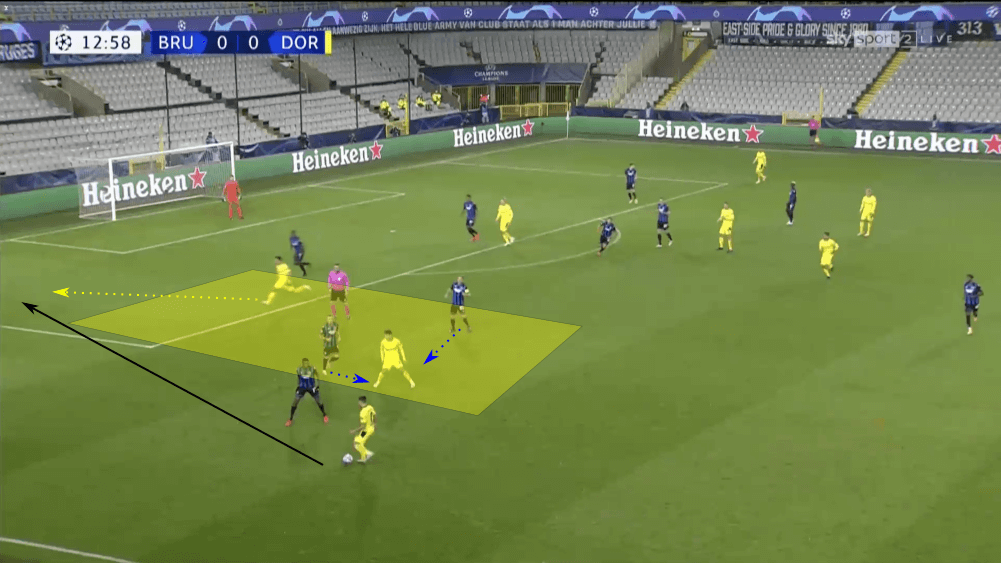 Reyna’s movement allowed for some vertical space to open up in the half-space. While Dortmund didn’t look to exploit that specifically, they were able to use it to move through. Guerreiro was pressured by Mata, the right-back. This meant that a large amount of space had opened up behind him. Recognising this, Thomas Delaney made a run from the centre of the pitch into the open area. Guerreiro slid the ball to him, and Delaney had enough time to turn and face his defender. His out-swinging cross appeared to be tipped, but it fell to Hazard who finished the chance off neatly.

Dortmund also took the opportunity to create a numerical overload in the half-space. This worked well because it caused confusion amongst defenders as it moved them out of position. 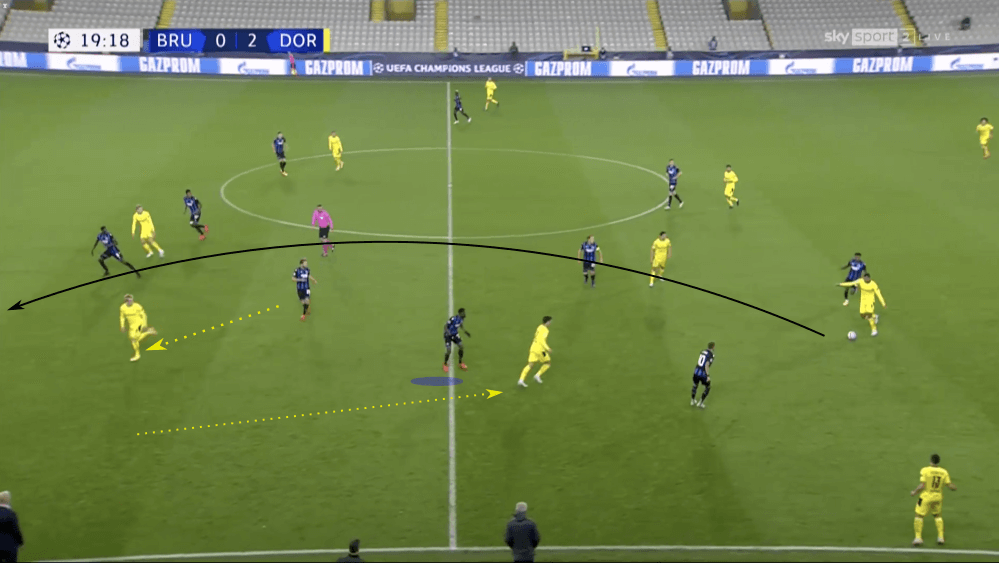 Shortly after scoring their first goal, Dortmund was back in possession. As Akanji dribbled forward, attracting pressure as he did, Reyna came inside to the half space from a wider position. By doing so, he brought his defender, the right-back Mata, with him. This opened up a lot of space on the left flank. Brandt was being marked by Rits, who didn’t look comfortable following Brandt too far wide. As a result, Brandt peeled away from him and made a great run down the pitch and Akanji played the ball in. Luckily for Brugge, Brandt lost the challenge with Odilon Kossounou, and Brugge regained possession.

In the second half, Dortmund continued to overload the half-space. Once again, this dragged defenders out of position and created huge amounts of space elsewhere that Dortmund looked to exploit. 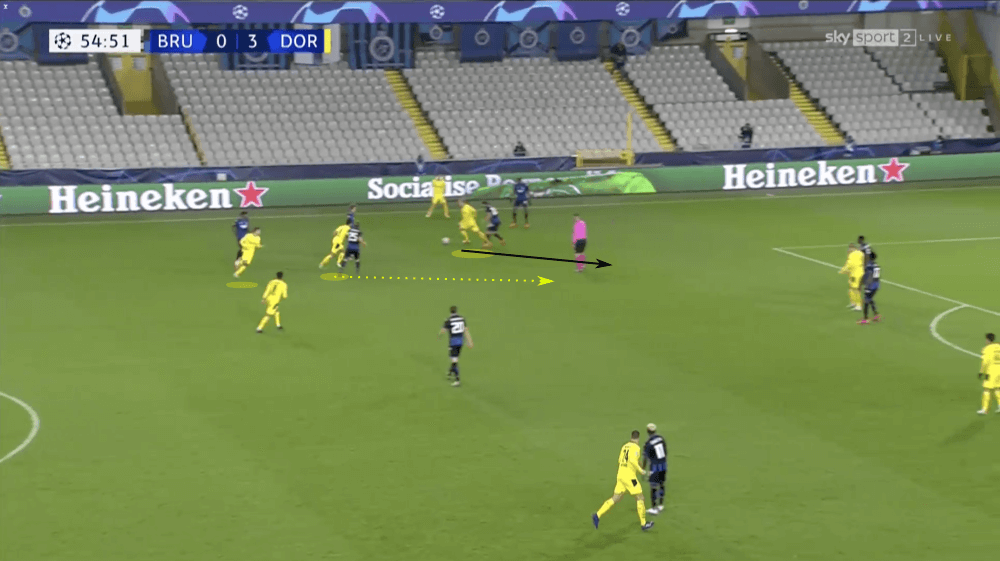 In the image above, Brandt is on the ball. He, Delaney, and Guerreiro had just finished combining with one another, drawing the defensive pressure in as they did. Hazard’s positioning on the touchline drew Mata’s attention, thus opening up a large gap between the right-back and his centre-back. Brandt was able to turn and play a pass into the feet of Delaney, who had recognised the space and looked to exploit it. Delaney was able to dribble and eventually looked to lay the ball off to Dahoud at the top of the box, but his pass was denied by some last ditch defending from Brugge. In essence, Dortmund was able to execute their positional play principles in this tight space, dragging their defenders with them and making it look like a training exercise in the process.

Meunier finds space on the right

One of the big questions for Dortmund this season was concerned with how they would replace Achraf Hakimi on the right side. While Thomas Meunier has not been the exact replacement in terms of speed, he demonstrated that he can find the right time to sprint down the flank and exploit the available space.

The first opportunity revealed itself as Gio Reyna checked towards the ball from the right side. This occurred after a poor header from Brugge landed at Dahoud’s feet in the centre of the park. 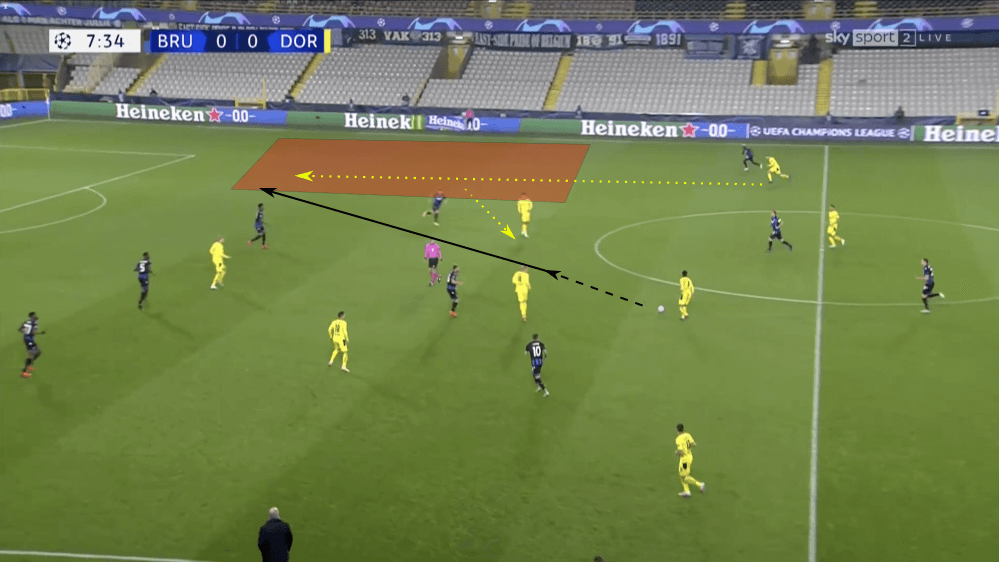 Sobol, Brugge’s left-back, followed Reyna as he dropped down. This opened up a large amount of space behind him. Meunier recognised the room available and  saw how much time Dahoud had on the ball. If you look at the image closely, you can see the two making pretty clear eye contact. Meunier made the run and was under immediate pressure from Diatta (the left midfielder) and Deli (the centre-back) who did just enough to close him down and send the ball out for a goal kick.

Later in the match, Meunier found the perfect time to exploit space, and this time, it ended in a goal. Dortmund was again targeting the left half-space when Brandt sent a quick pass to Dahoud, who was unmarked in the centre of the pitch. 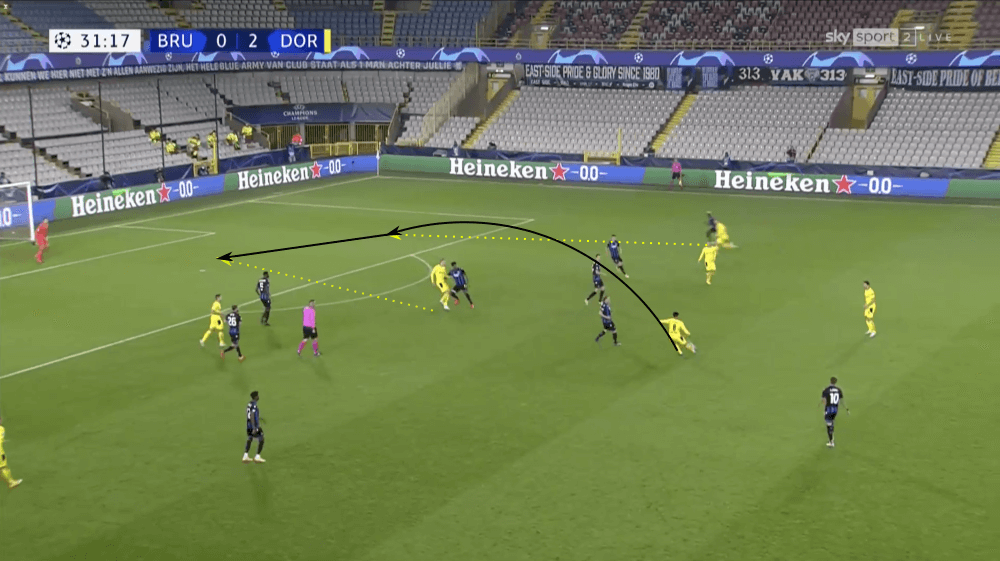 Just like Reyna had done previously, Hazard dropped down, dragging his defender with him. As soon as Meunier saw him begin his run, he burst through into that space. Brugge, because the ball had been played backwards, albeit on an angle, was stepping forward. Dahoud’s pass was perfect; all Meunier had to do was get a touch on it, and he laid the ball off for Haaland to bury the chance in the back of the net.

Dortmund’s flurry of goals really overwhelmed Brugge and seemed to dishearten them as well. The win sent them to the top of Group F on six points. While Brugge will be disappointed with the result, they are only two points off of Dortmund despite being in third place in the group. Dortmund’s next match comes on Saturday in the Bundesliga when they take on Bayern Munich in a clash of two teams at the top of the table.