It was a week to forget for FC Porto, who followed an opening day 2-1 defeat to Liga NOS newcomers Gil Vicente by crashing out of the Champions League to Krasnodar. Although the Portuguese side had come away with a 1-0 win in the first leg, the away goals rule saw the Russians go through with this 3-2 victory in Porto.

The away side raced into an early lead as Tonny Vilhena scored from a set-piece scramble in the third minute. Then two counter-attacking goals by teenage winger Magomed Suleymanov saw Krasnodar take a 3-0 lead into the break. Despite launching wave after wave of attacks in the second half, the two goals clawed back by Porto’s Zé Luis and Luis Díaz would not be enough to avoid slipping into the Europa League.

This tactical analysis will delve into the tactical elements behind this thrilling end-to-end encounter. 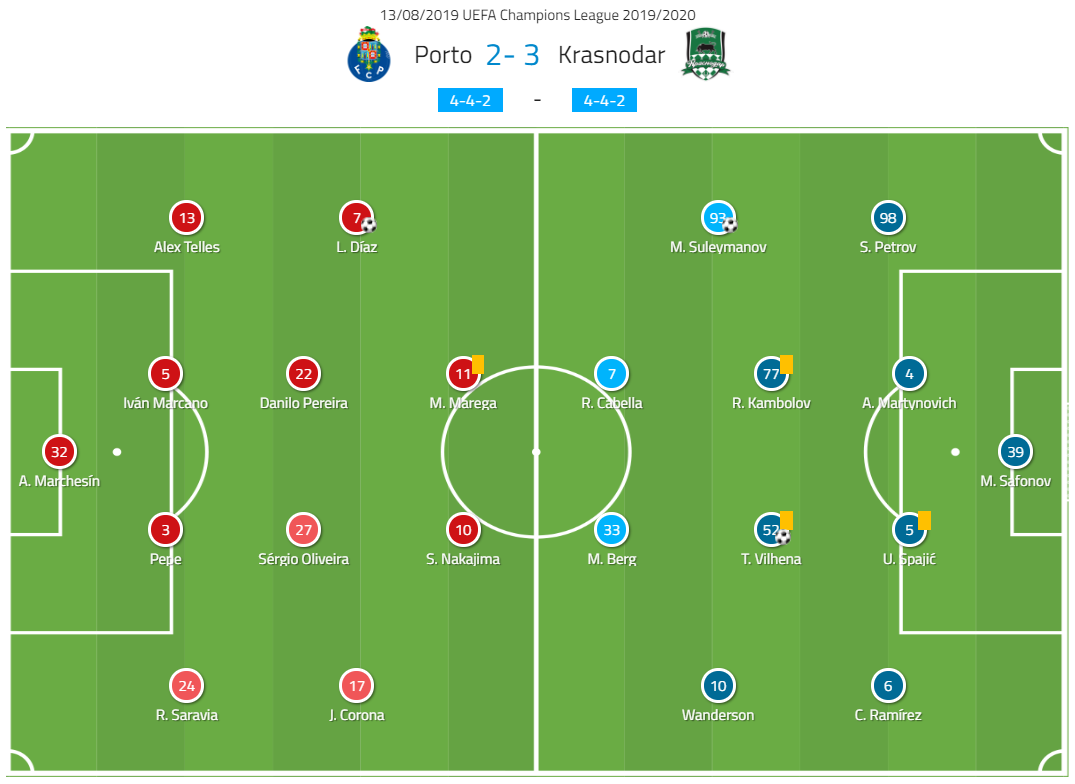 The home side made three changes with respect to the first leg, introducing three of their new signings. Renzo Saravia came in at right back, Colombian winger Luis Díaz came in on the left flank and Shoya Nakajima partnered Moussa Marega up front.

The visitors made just the one change, with 19-year-old winger Magomed Suleymanov featuring on the right in place of Younes Namli.

Before the game had really got going Krasnodar were already in the lead as Vilhena found himself unmarked to volley home at the far post following a corner. Even so, the home side made a confident start to the game, moving the ball around quickly and slickly with intelligent movement off the ball.

It was all the more surprising then when Krasnodar doubled their lead following a Porto free kick in the 13th minute. As Krasnodar cleared the ball, teenage winger Suleymanov began his run towards the right flank.

The young Russian’s pace saw him pull well away from Nakajima, who had been tracking him. By the time the ball was played across to him it was simply a case of beating the goalkeeper, which he did in ruthless fashion, squeezing the ball through the legs of Porto‘s Agustín Marchesín and into the back of the net.

Suleymanov didn’t stop there though. In the 34th minute he managed to put his side even further ahead, once again using his pace as Krasnodar executed another impressive attacking transition.

This time it was Dutch midfielder Tonny Vilhena who found Suleymanov in space on the right hand side with a searching cross-field ball. The winger was then able to take on Luis Díaz one on one.

Unfortunately for Porto, their left-back Alex Telles was recovering from a knock to the face he had received some moments before at the other end of the pitch. That is why left-winger Díaz was forced to drop back and take on Suleymanov, where the Colombian’s defensive vulnerabilities were exposed as he failed to get tight enough to the Russian, allowing him the space to fire a shot into the bottom corner to put his side three goals ahead.

Despite the huge set-back inflicted by the goals scored over the course of the first half, Porto played particularly well in possession.

Krasnodar continued to press Porto man-to-man as they had done in the first leg but the hosts found solutions to this and managed to find teammates in space as they played out from the back, mainly because of the intelligent movements they were making off the ball.

In the above image we see Danilo, the central midfielder, playing the ball out after having dropped between the centre-backs. The receiving player is right winger Corona, who has come inside, as Porto’s wingers often do to allow space for the full-backs to push forward.

Notice how, as the pass is played, Nakajima (highlighted in blue) is about to make a forward run from the midfield area. The Japanese playmaker started up front alongside Marega, though in reality whenever Porto had the ball he dropped into much deeper areas where he could cause Krasnodar problems between the lines.

These types of movements gave Porto a great deal of fluidity to their play. Even though the 4-4-2 shape is often associated with teams that play in a rigid and structured style, Porto proved in this game just how flexible it can be when the pieces are moved around.

In the above image we see how several of Porto’s players have made movements off the ball to find space between Krasnodar’s lines. On the right hand side, full-back Saravia has pushed high, allowing Corona to drop into the half space. Corona is joined in that area between the lines by Nakajima who has come deep from his forward position alongside Marega.

Meanwhile on the left flank, full-back Alex Telles has only pushed up slightly, as the winger Luis Díaz is positioned high up, on the shoulder of Krasnodar’s right-back.

As explained above, Porto’s movement meant that they were able to move the ball up the field quickly and fluidly, however, they were often let down by their final ball.

They failed to take advantage of the space they found between Krasnodar’s lines as they just couldn’t manage to thread the right ball through to lone striker Marega.

Even in the second half when Marega was supported by fellow striker Zé Luís, Porto struggled to find the right ball to play the forwards through on goal.

And it was the same story on the flanks. Despite getting into good positions to make deliveries into the box, Porto’s crossing was poor, often failing to find a single teammate.

And even when Porto did get players into the box, sometimes the crossing just wasn’t accurate enough, such as Nakajima’s overhit effort pictured below.

Porto’s last role of the dice

Porto manager Sérgio Conceição’s last role of the dice was to bring on striker Vincent Aboubakar for Corona in the 86th minute. This signified a late change in formation as Porto switched to a 3-4-3 system with Alex Telles joining the centre backs and Aboubakar joining Zé Luís and Marega in a three-pronged attack.

In this image we see Porto’s 3-4-3 shape but also notice that Krasnodar are still fairly open. Despite the fact that they were leading by a single goal in the dying minutes they chose not to sit back into a deep block as you might expect most teams to do in their situation.

By this stage the home side had managed to pull a couple of goals back, the second an impressive long-range strike from winger Luis Díaz. In a desperate attempt to clinch an equaliser that would have seen them progress, Porto continued to threaten Krasnodar, but the final ball also continued to let them down.

In the above image goalscorer Luis Díaz gets into a great position only to play the final pass just behind the run of striker Zé Luís in what would be the story of Porto’s night. With not much fault to be found in their tactics, they just couldn’t put the ball in the net. They had a total of 25 shots with 11 on target but came away with nothing.

The scoreline was harsh on Porto and the xG statistics (Porto 1.34 vs 0.7 Krasnodar) support that. As this analysis has demonstrated, they managed to combine well and progress the ball into the final third only to be let down by their final ball. They failed to take their chances and were particularly unfortunate with the knock to Alex Telles, which undoubtedly played a hand in conceding Krasnodar’s third goal.

Krasnodar will count themselves lucky to have gone through but with the individual talent of the likes of Magomed Suleymanov on board they will fancy their chances against Olympiacos in the playoff round where a place in the Champions League group stages is at stake.