UEFA Champions League debutants FC Midtjylland have now played their very first game in this illustrious competition since the club’s inception 21-years ago. An unwanted 0-4 loss to Serie A goal machine, Atalanta, Gian Piero Gasperini’s men were just too strong for Brian Priske’s young side.

Four goals with no reply from the Nerazzurri, three in the first half and one late in the second half sent the visitors away with a convincing three points. Duván Zapata finished low on 26 minutes, finding an uncontested angle in the box to score from a poorly defended set-piece by Midtjylland.

Ten minutes later Alejandro Gómez’s wonder strike that hit the top left corner from outside the box, giving the visitors a 0-2 lead before Luis Muriel tapped in a loose ball from a cross inside the six-yard box to make it 0-3 at the break. In the dying embers of the match, another spectacular finish into the top corner from substitute Aleksey Miranchuk made certain that Midtjylland would only have lessons instead of points to take away from their first Champions League outing.

The tactical analysis asses the tactics and major talking points that decided this tie. Our analysis looks at the most prominent aspects of both teams style of play coupled with the support of key data to give us a comprehensive understanding of this game.

FC Midtjylland: 4-2-3-1
Priske’s side showed a good balance between attack and defence, as the double pivot were vital in denying the opposition numerical superiority through the centre. Sweedish youngster Jen-Lys Cajuste was superb in the middle, showing outstanding courage and creativity to drive at defenders and make something happen in front of the goal for his team. Priske used all five subs in the second half; however, the collective changes were unable to make a difference by way of threatening the goal.

Atalanta: 3-4-1-2
Gasperini side showcased their signature style, a style that has caught the attention of many the Nerazzurri return to winning ways after a loss in their last Serie A outing. Playing a high risk-high-reward football that commits all ten outfielders to the final third, the Italian goal machine showed no caution or fear going forward. Gasperini also used all five subs in the second half, replacing players across all units.

Atalanta showed they could hurt the hosts from any are of the field, whether that was from, crosses, central attacks with combinations into the box or set-pieces. The Nerazzurri amounted an xG of 3.27, and it was easy to see why.

Building from the back, the back three as well as the goalkeeper were confident to pass and receive horizontally and vertically while being dangerously close to the first line of pressure. In the build-up, the wing-backs would push high and wide while the forwards and central-midfielders would offer high to low rotations to receive forward passes in space.

Atalanta was relentless in attack, firing 18 shots on goal and 10 of those attempts found the target. They also made 10 crosses into the box with 3 being considered accurate; perhaps more crosses might have been made if Midtjylland were not balanced and prepared to defend crosses centrally.

Let’s take a look below at some key aspects that sums up Atalanta’s attacking style of play. 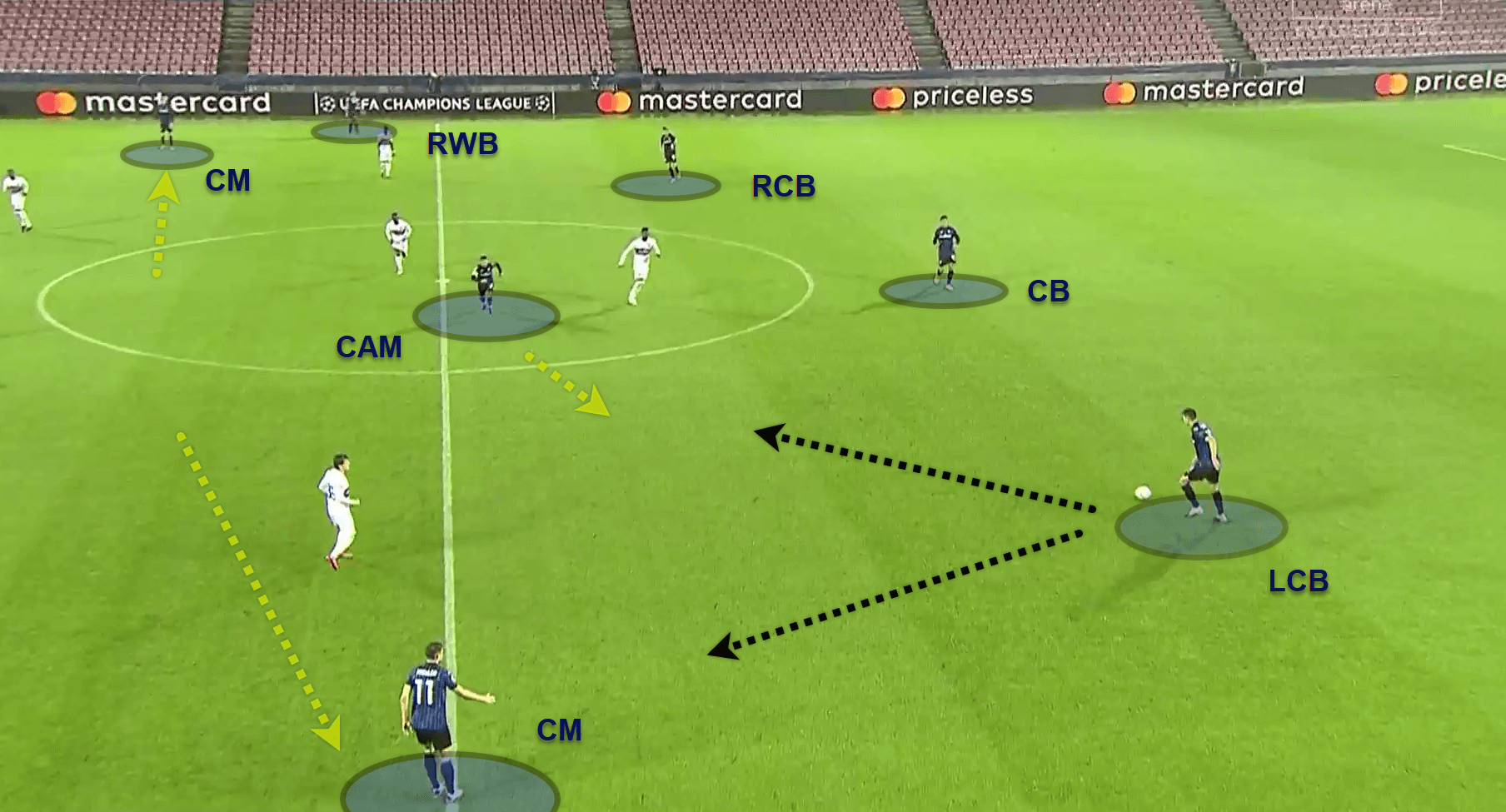 Above, we see Atalanta’s starting shape to play through the mid-block. The central-midfielder at the bottom of the screen moves into a false-full-back position, creating space for the ‘CAM’ to come across. Here Atalanta creates an overload in the half-space and can easily find an opportunity to play forward. 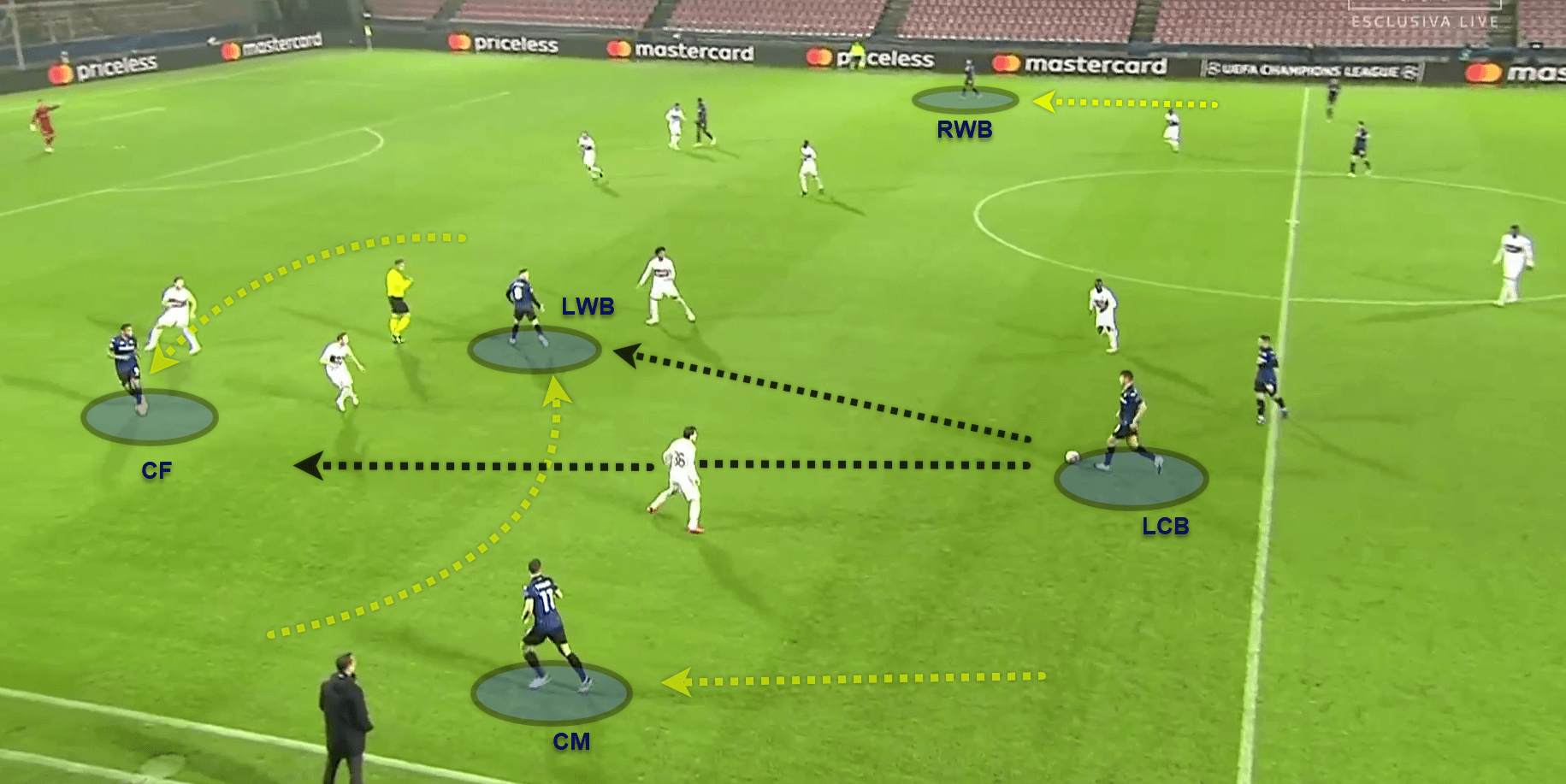 As the play progresses to the middle third, we see above a common pattern of play Atalanta used to either progress into the final third or penetrate centrally. The ‘LWB’ makes an angled run inside while just up ahead the ‘CF’ moves into the vacated channel. Should either pass be cut off the ‘CM’ on the flank is free to receive a pass.

Another common pattern of play we see when the ‘LCB’ has possession in the middle third. The ‘CF’ will drift across into the half-space where he will receive a pass; then with one-touch, he will lay-off a short pass to meet the out-to-in run of the ‘LWB’. 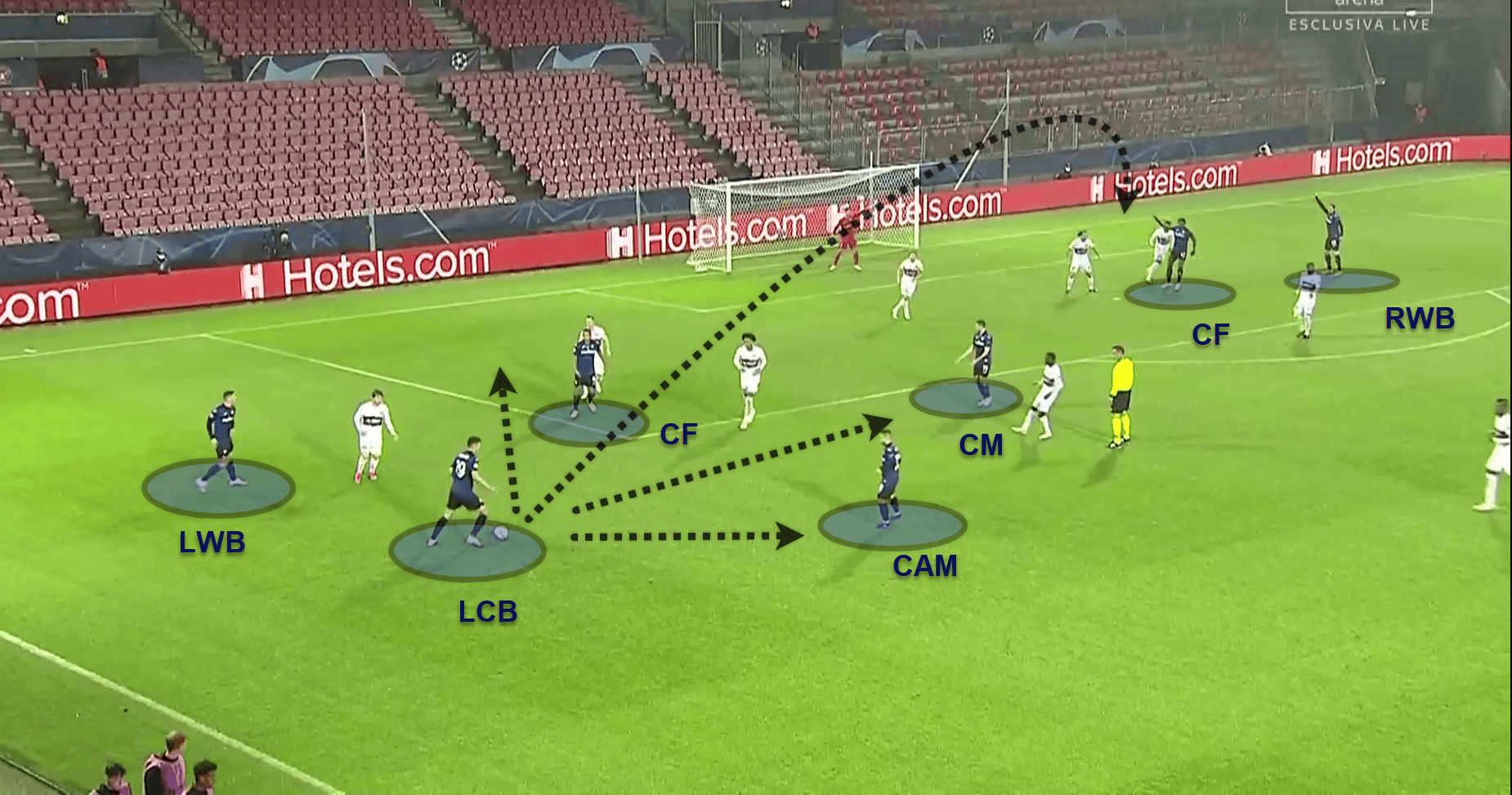 Finally, above, we see a moment that captures Atalanta’s attacking shape in the final third. Atalanta has an overload of +2 players in the channel while the second ‘CF’ and the ‘RWB’ are positioned at the back post to attack an in-swinging cross. Observe all the passing options available to the ‘LCB’ in possession at this moment.

Although the scoreline does not offer a fair reflection of Midtjylland’s defensive performance, the Danish side showed respect and a clear game plan to consolidate for their opponents. Making 43 interceptions and winning 60% of their defensive duels, the home side were organised from the front to receive and nullify the Atalanta attack.

When the pressing triggers were made by the ‘CF’ isolating the Atalanta defender in possession, Midtjylland would engage the press by squeezing man for man in midfield while the forwards press the ball carrier.

In the final third, Midtjylland were compact, centrally when meeting the ball and when the play went wide, the challenge for the Danish side was how to deny Atalanta an overload in wide areas while still being balanced and centrally compact in the box to defend crosses. 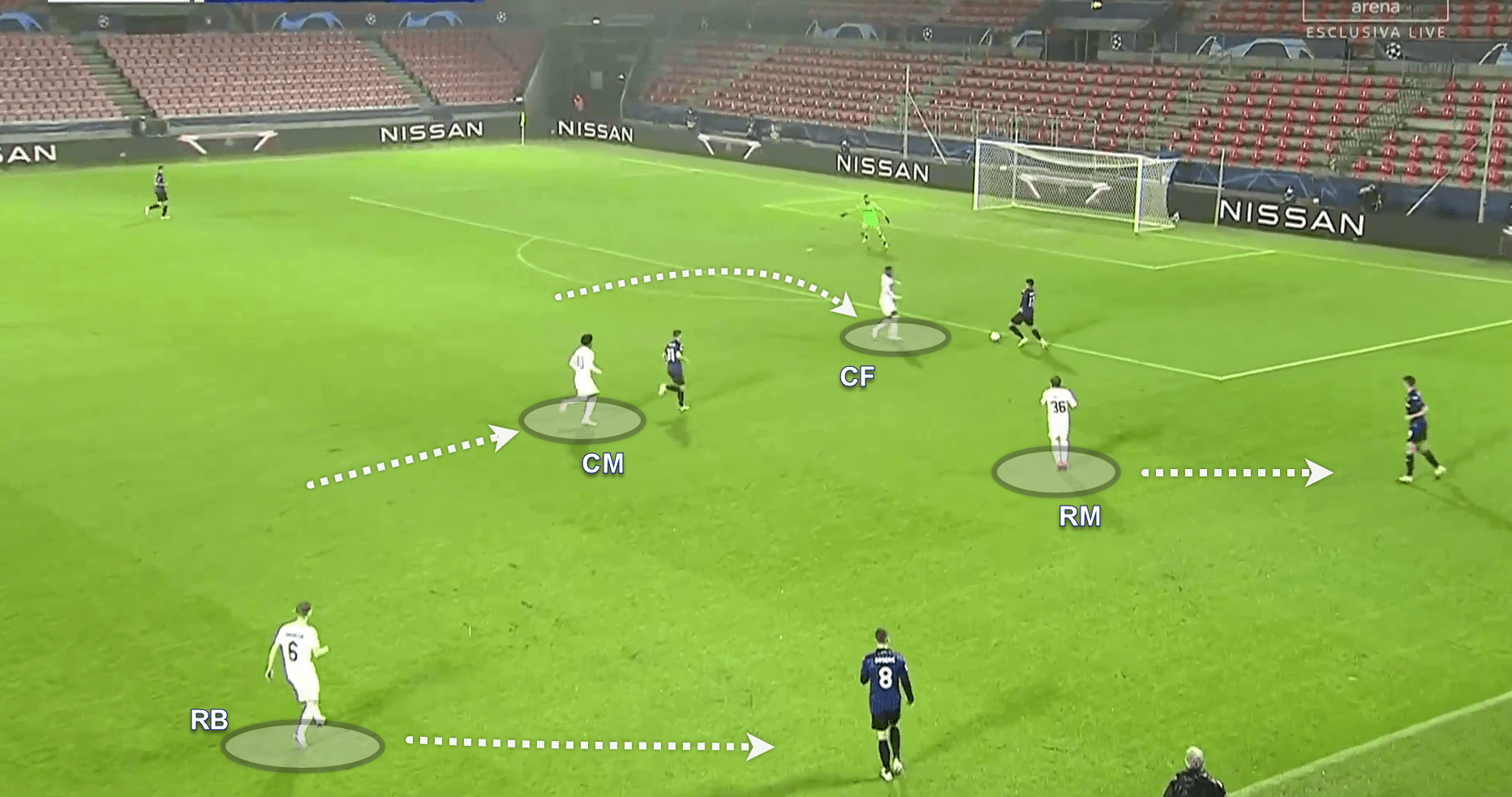 Above, we see when the ‘CF’ isolates the centre-back by screening the back pass. While at the same time, the nearest midfielders on that side push high to man-mark the passing options. From here, the home side would look to win possession and quickly transition to attack. 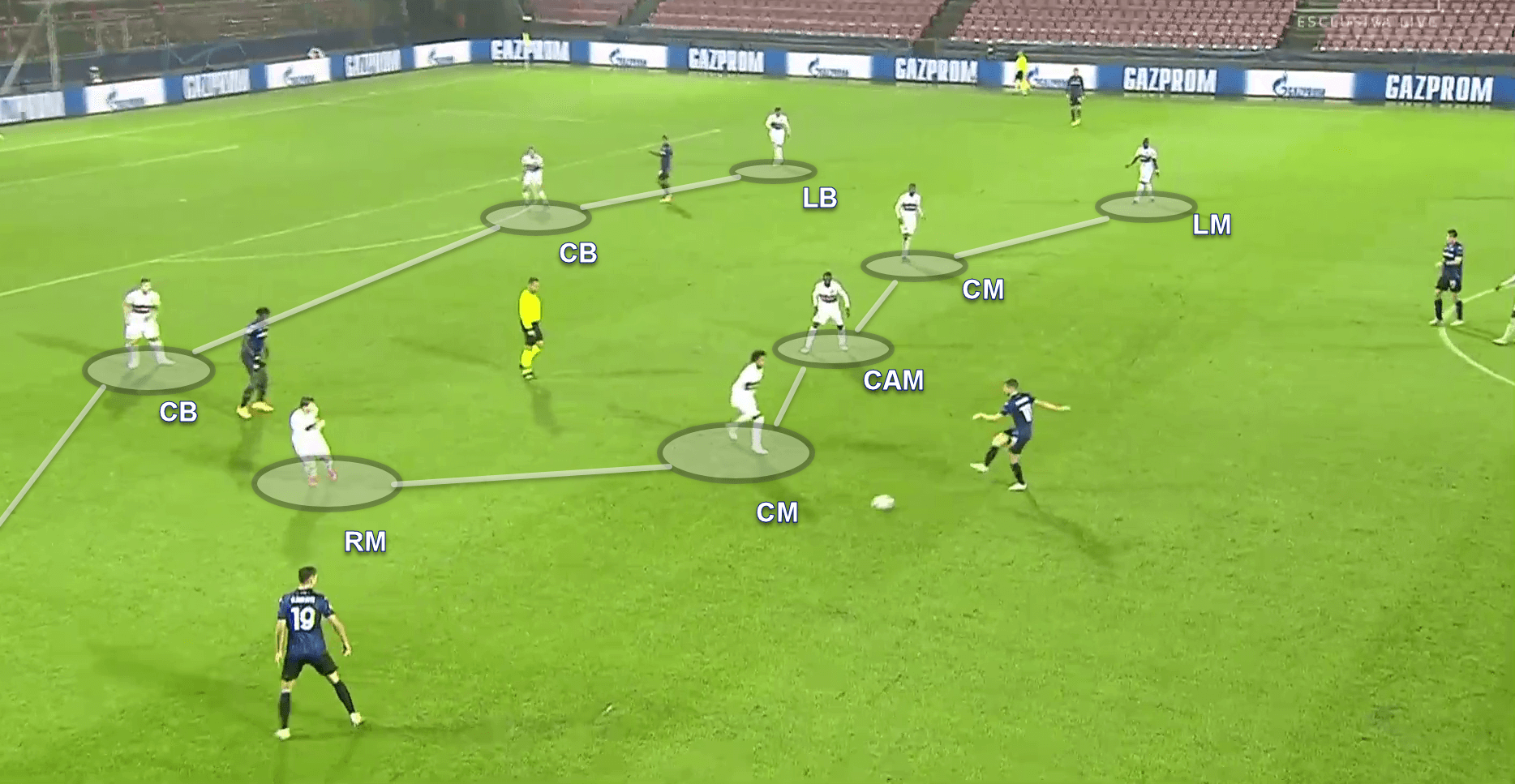 Above, we see Midtjylland retreat into a 4-5-1, the five midfielders look to form a block more often than engage the central players, thus not to create any gaps for Atalanta to exploit with forward passes. Both ‘CB’s remain tight to the Atalanta ‘CF’s not to allow easy passes forward.

Atalanta did well to reduce their opponent to an xG of 0.79, when they pressed Atalanta were aggressive and organised to engage man and space orientated pressing. In particular, a small detail but significant still, Atalanta were cautious not to allow passes or dribbles to reach the inside of the box, winning 54% of their defensive duels and 58% of their ariel duels in the final third.

In the defensive phase the Italian side would occupy a 5-3-2 formation, remaining centrally balanced to defend Midtjyllands 14 crosses while still denying numerical inferiority on the flanks. In the transition to attack the Nerazzurri were efficient, having only to make 10 clearances all game, the physical forward pairing was superb at holding up the ball even when isolated. 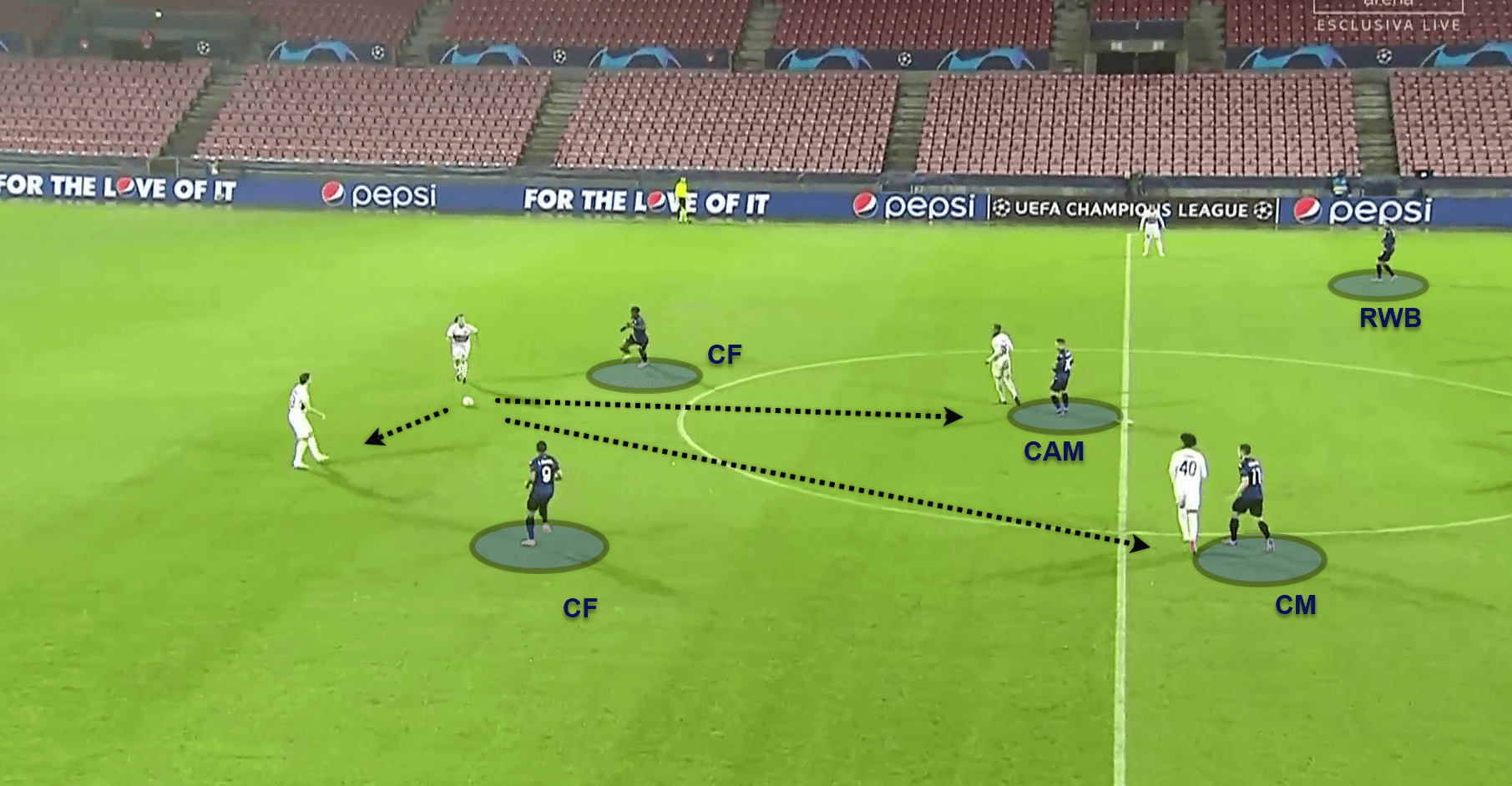 Above, we see when the first line of defence finds the opportunity to engage the press. Starting by arcing their runs to screen passing angles, they then force the passes into the middle where both central midfielders are marked. On these occasions, the ball carrier is forced to go long and most often, will result in a turnover of possession. 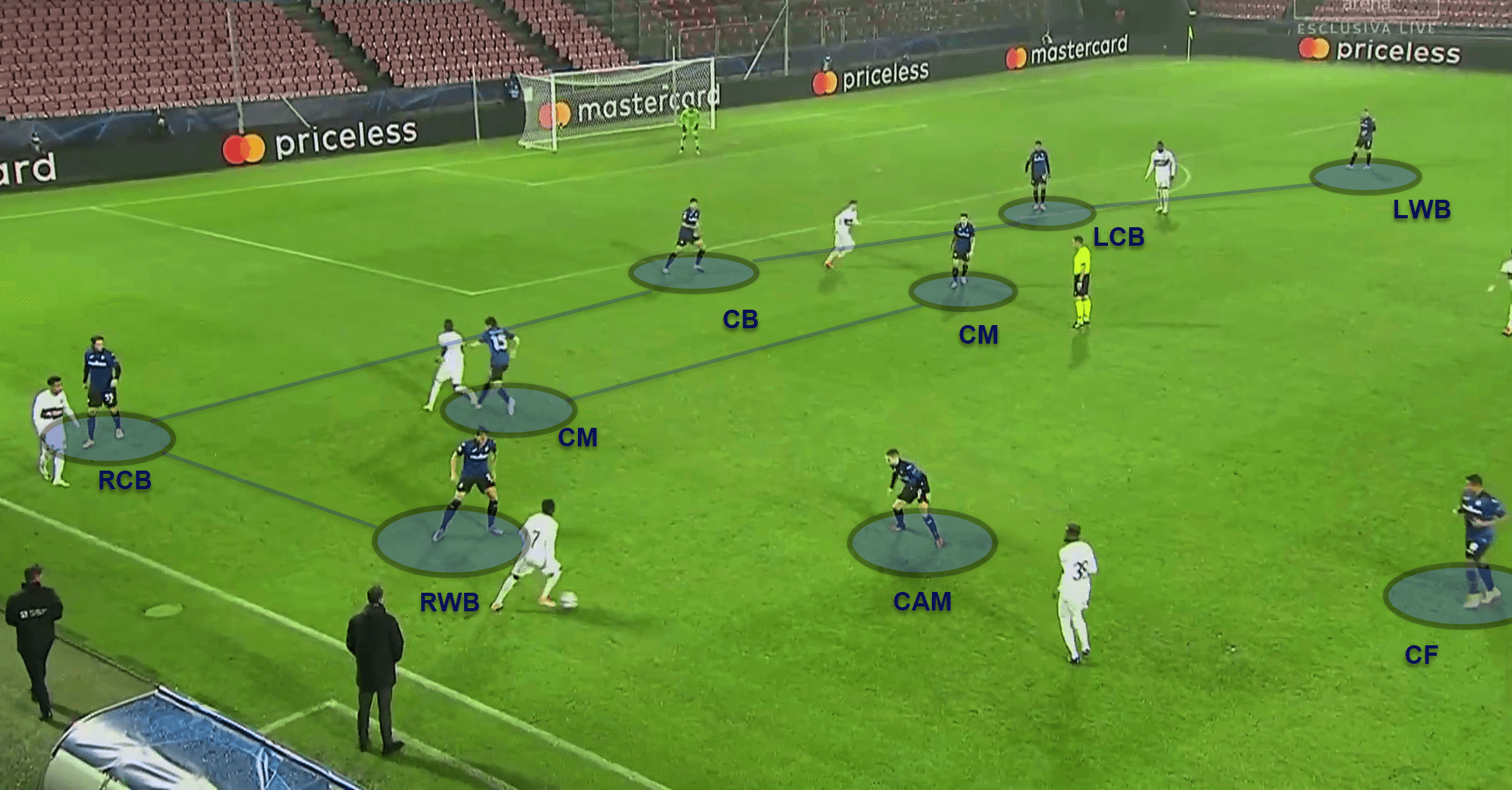 Finally, above we see a moment where Atalanta form their back five to close the opportunities to penetrate by passes or crosses. Two of the three centre-backs remain centrally balanced while the other steps into the channel to deny numerical superiority. Notice the ‘CM’ tracks the run of the Midtjylland midfielder. By doing so, he allows the back-five to remain balanced and organised.

Midtjylland target success in the transition

Midtjylland found it difficult to break down Atalanta in the build-up phase; as a result, the Danish side saw their best chances coming by way of being direct and quick in the transition to attack. Most often, Midtjylland would exploit the space left vacated by the wing-backs and wide centre-backs.

On the quick breaks, the home side was confident in their dribbling and breakout play. When possession was turned over, and Midtjylland began to attack, there was support arriving quickly along with forward passing options ahead of the ball at close distance to allow for combinations.

Below, we look at two images that show Midtjylland’s principles in the transition to attack. 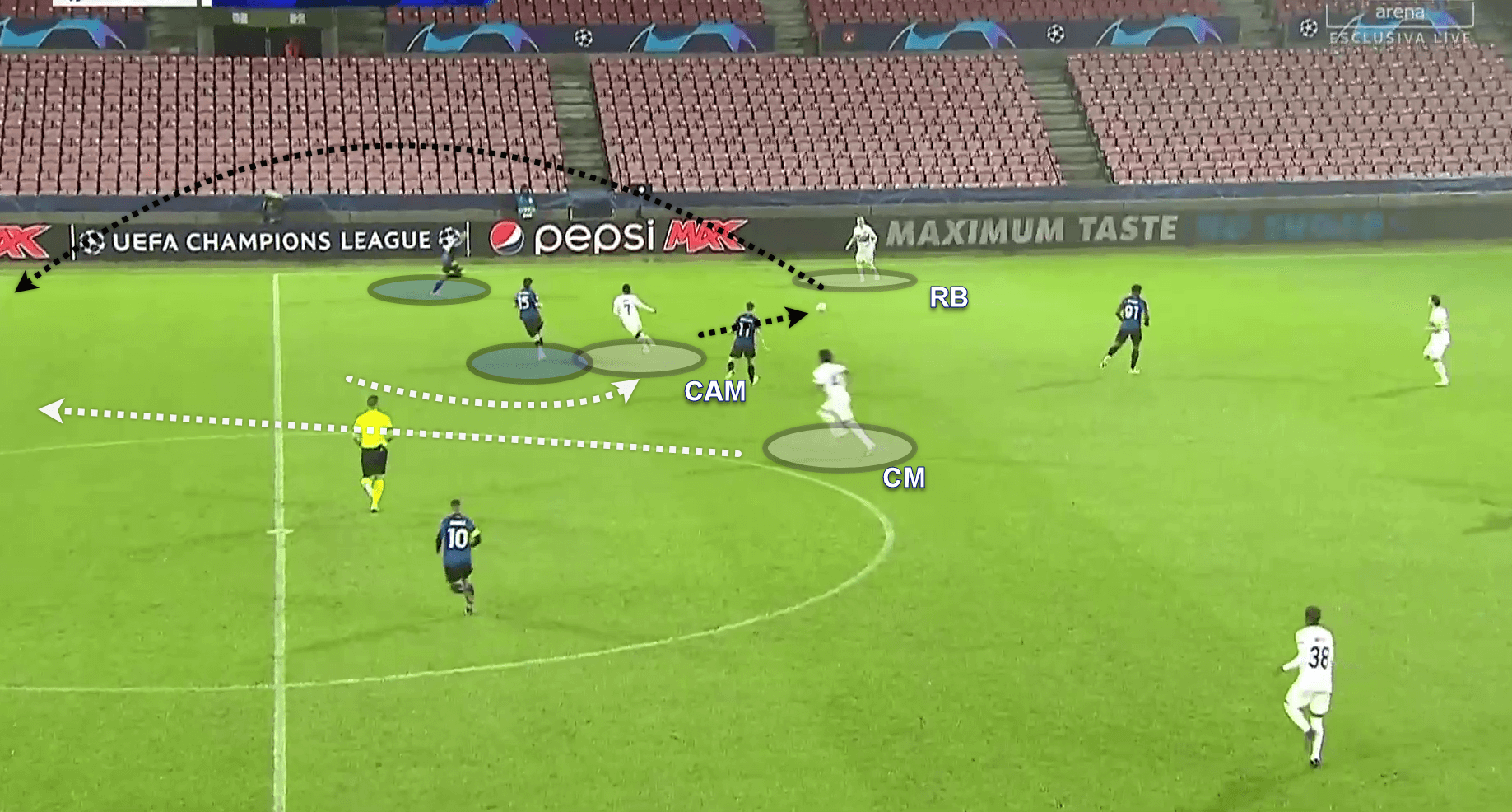 Midtjylland have just won back possession in the middle third; the ‘CAM’ plays a short pass to the ‘RB’. The ‘CM’ begins his run into the vacated space od the wing-back and the midfielders. The ‘RB’ plays a first time ball over the top into the run of the ‘CM’ 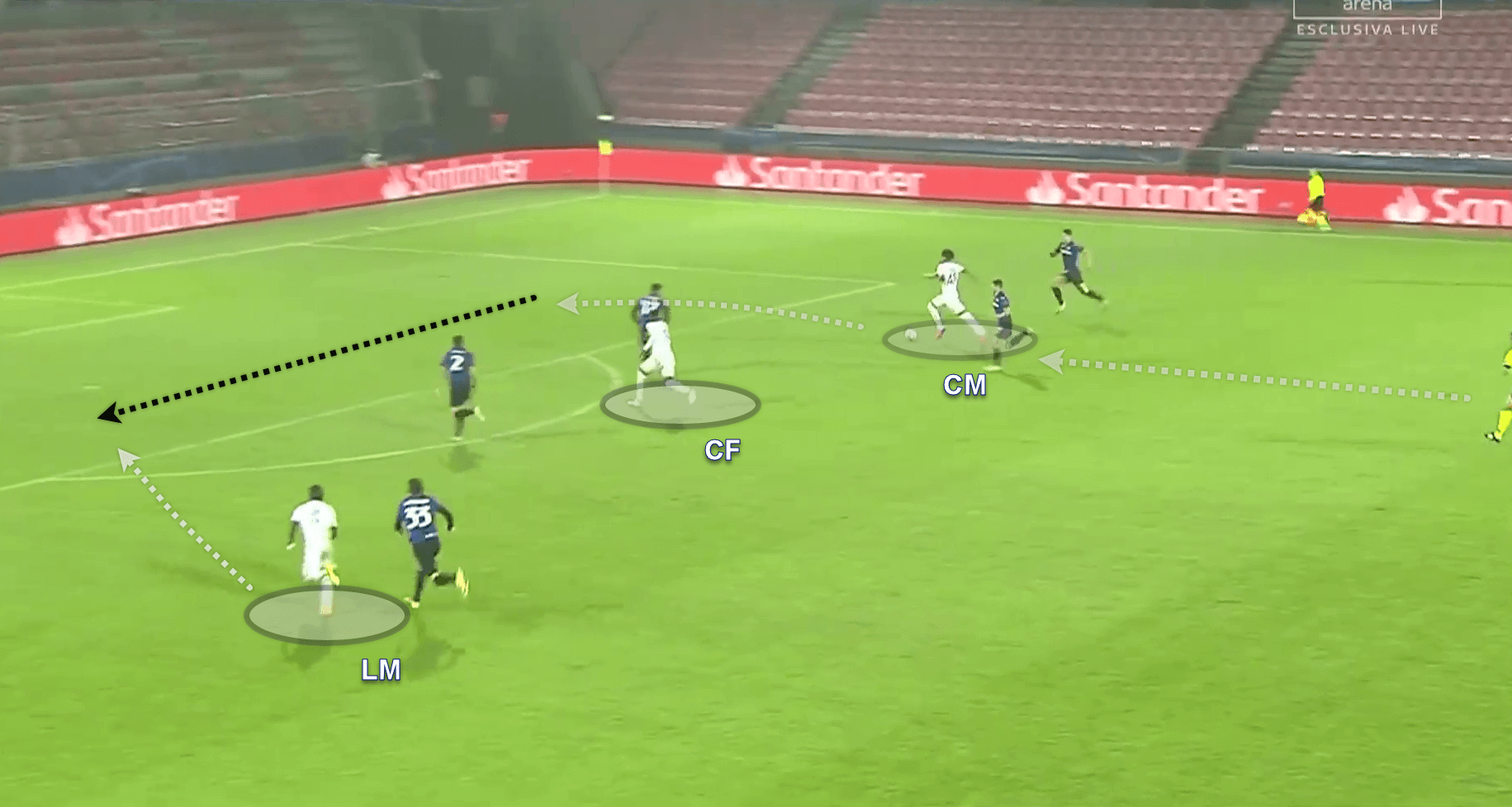 As the ‘CM’ drives forward he reaches the box; once inside he delivers a low cross for the ‘LM’ to Potentially score from. These moments offer a lot of value and opportunity, not only by way of Attempts on goal but secondary success such as drawing fouls in dangerous areas and forcing players into making challenges which would result in bookings.

Although Midtjylland failed to get their first Champions League goal, they showed much improvement in the second half to come close, perhaps the gulf in class and the lack of European experience was too much for them on this occasion.

A day that will still go down in FC Midtjylland’s history although not a result they were hoping for, it is the first test in Champions League football for Midtjylland and Brian Priske. On the other hand, Atalanta returns to winning ways after a shock defeat to Napoli last weekend.

The gulf in class, along with the greater European experience was perhaps why Atalanta came away as worthy winners. There are only lessons instead of points to take away from their spirited performance; however, we are witnessing a club with a different model and a philosophy for football that seems progressive and promising for the future.