Following their virtual loss against Juventus due to covid-19 issues that prevented them from going to Turin, Napoli looked forward to their clash with Atalanta to win some very needed points to climb in the standings.

On the other side, Atalanta were the first in the league with nine points and went to Napoli in order to maintain their leadership of Serie A and keep their good run of form going before thinking about their coming UEFA Champions League away fixture.

The game went surprisingly in a single direction, that of Napoli. They convincingly won 4-1 over Atalanta who were not able to make their usual outstanding performances.

It was clear that Gennaro Gattuso prepared this match in the best possible way and his players were very determined to win and apply his instructions. And we will come to analysing this in detail.

In this tactical analysis article, we will look at both teams’ tactics and the plans that they applied throughout the match, while focusing on the best performing players and on what went wrong for Atalanta.

This analysis will begin by analysing Napoli’s plans and positioning that enabled them to stop Atalanta before moving on to identify what went wrong for Atalanta.

Gattuso preferred to start this match with a 4-2-3-1 with David Ospina as a goalkeeper, Kostas Manolas and Kalidou Koulibaly as centre-backs, Giovanni Di Lorenzo on the right flank and Elseid Hysaj as a left-back. In midfield, the team played with Fabián Ruiz and Bakayoko as central midfielders, and this was the first official game of Tiémoué Bakayoko for Napoli.

In front of them, Matteo Politano played on the right-wing and Hirving Lozano on the left-wing, while Dries Mertens was positioned as an attacking midfielder behind Victor Osimhen, the team’s forward.

For Atalanta, Gian Piero Gasperini chose to start with a 3-4-1-2 formation with Sportiello as the goalkeeper, while Rafael Tolói, Cristian Romero and José Luis Palomino formed the defensive line since the three of them played as centre-backs. In midfield, Fabio Depaoli played on the right-wing and Robin Gosens on the left-wing.

And both of them contributed in attack and helped the team’s defence when out of possession. Mario Pašalić and Marten de Roon played as central midfielders in front of the defence while Alejandro Gómez, known as “il Papu”, was the attacking midfielder who played just behind the team’s forwards Josip Iličić and Duván Zapata. 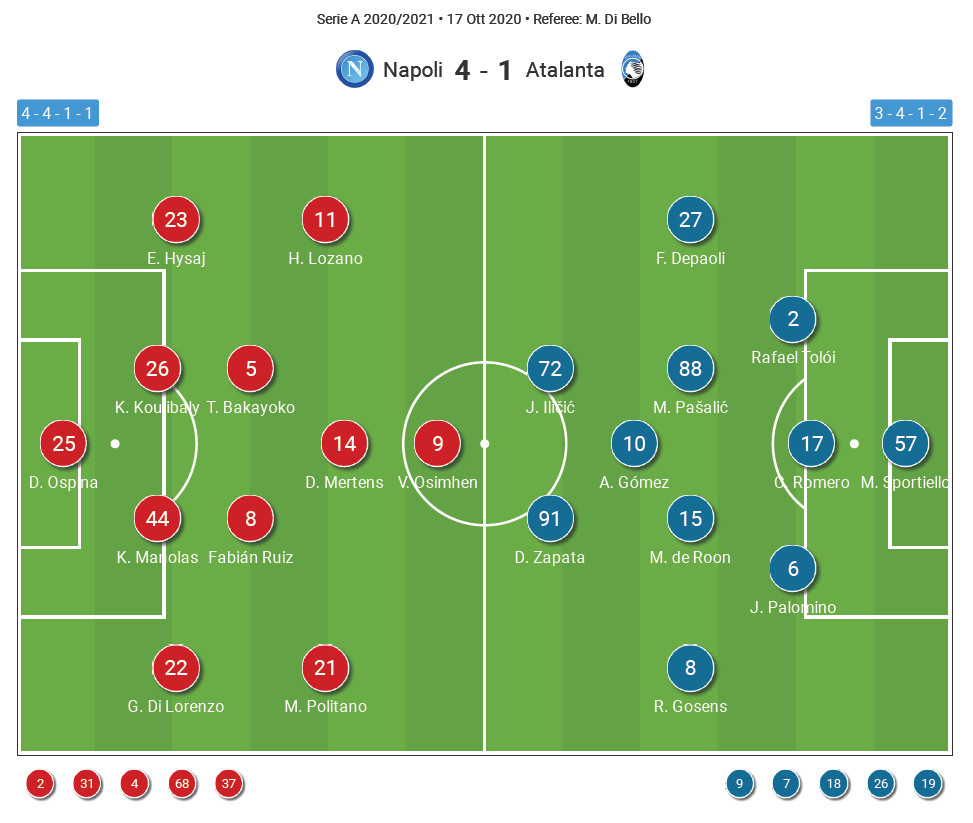 A convincing win for Gattuso’s Napoli

The game started with Napoli relying on short and accurate passes in defence and, when possible, long-passes to Osimhen who had the physical strength needed to beat Romero, who was his direct marker throughout the match. The latter was obliged to commit mistakes and overall, he was not able to stop Osimhen.

This created many attacking solutions for Napoli, because Osimhen alternated between moving centrally and at times on the right and on the left. By winning in aerial duels and creating space to Lozano on the left, to Politano on the right-wing and at times to Mertens who played just behind him, Atalanta’s defence was destroyed even though Gosens and Depaoli both did not participate in attack so often like in their previous matches.

Also, Atalanta’s poor defending performance which was further noticed in this match since there were no attacking strengths that could hide their defensive weakness, making the job easier for Napoli.

For instance, in the first goal action, Osimhen went back to midfield to receive, serve his teammate and then run to the box, where the three defenders were waiting for him. However, when the ball was about to be crossed from the right-wing, both Tolói and Romero left him unmarked and obliged Depaoli to mark an additional player apart from Lozano, who was his direct opponent.

And therefore, things got difficult for him since Osimhen covered him and pretended to get the ball but left it to Lozano who scored. And all this was due to poor marking from not one but two Atalanta centre-backs. 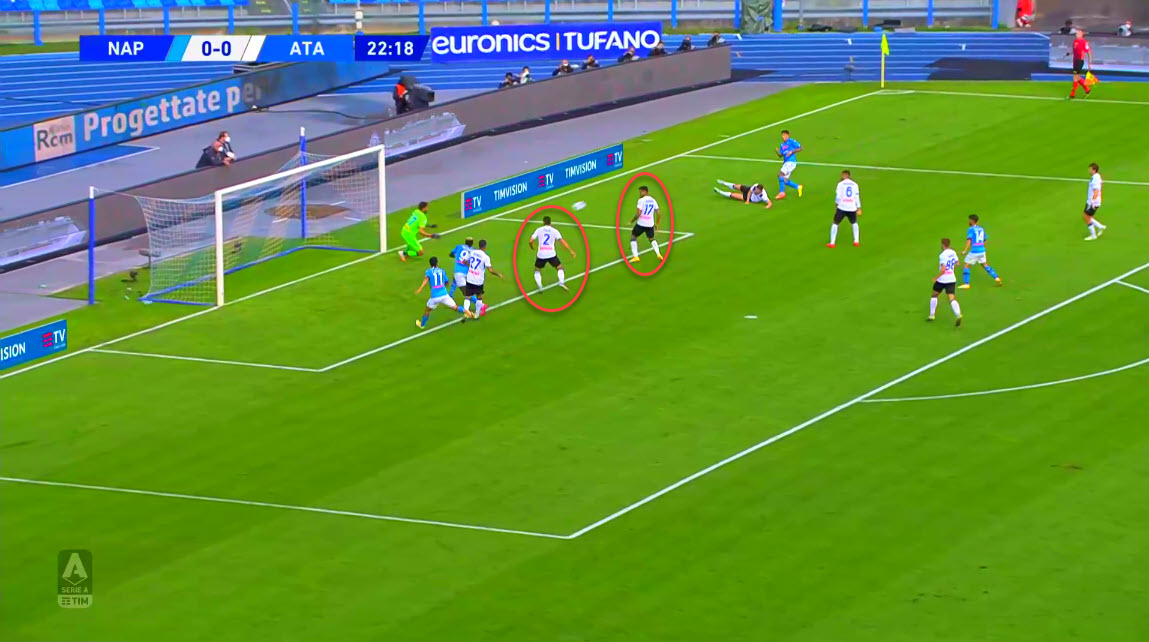 Gattuso’s 4-2-3-1 not only relies on Osimhen as we mentioned above, but it is strengthened with Mertens playing as a trequartista behind the forward. Playing a player like Mertens in this role means that the team has got an excellent player in midfield who can link between Lozano and Politano since he moves near the wings, and more importantly he links between Bakayoko, Ruiz and Osimhen.

His agility and pace make of him a dangerous threat to any defence especially when he comes from behind as his new position suggests.

You can see in this picture how thanks to Napoli’s formation and positioning, a lot of space is free between Atalanta’s defenders, since they are either marking Osimhen or Lozano and Politano on the wings. And Mertens exploits this space very well and he could have exploited it even better on some occasions. 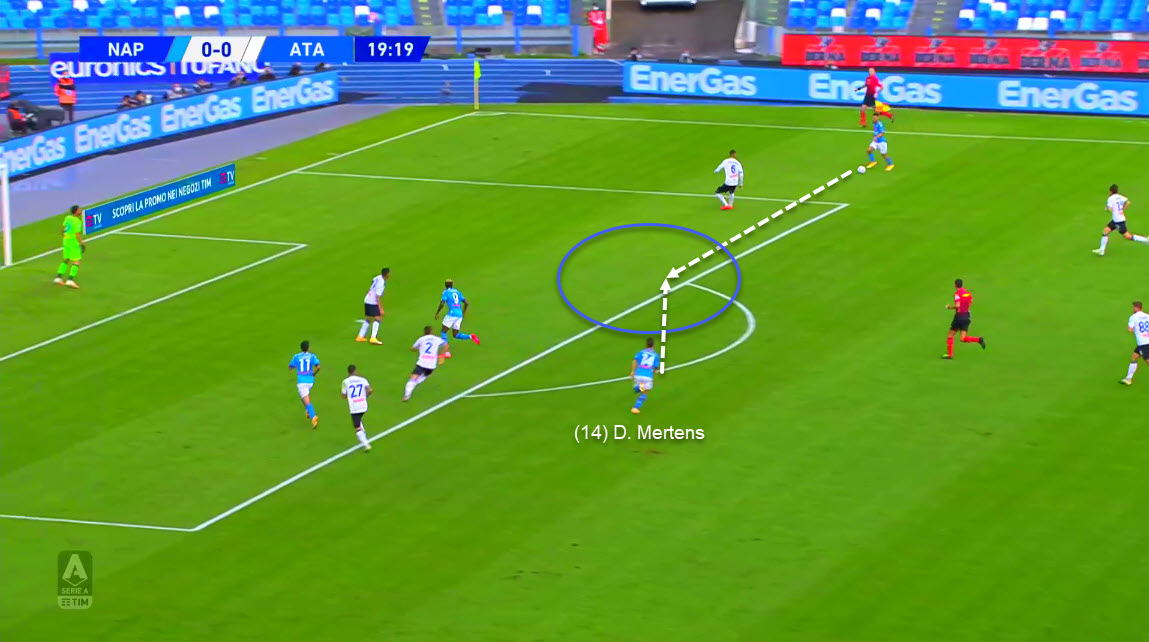 Moreover, the team made a very organised high pressing on Atalanta defenders to prevent them from getting to Napoli’s own third easily and oblige them to commit mistakes.

The job was further facilitated for Napoli thanks to Atalanta’s defensive playing style which relied on three defenders at the back. They were heavily disturbed by Osimhen, Lozano, Politano and Mertens who played as a second striker when out of possession.

Just like you can see in this picture, Napoli’s high pressing was usually effective during this game and did not allow Atalanta to build up from the back. 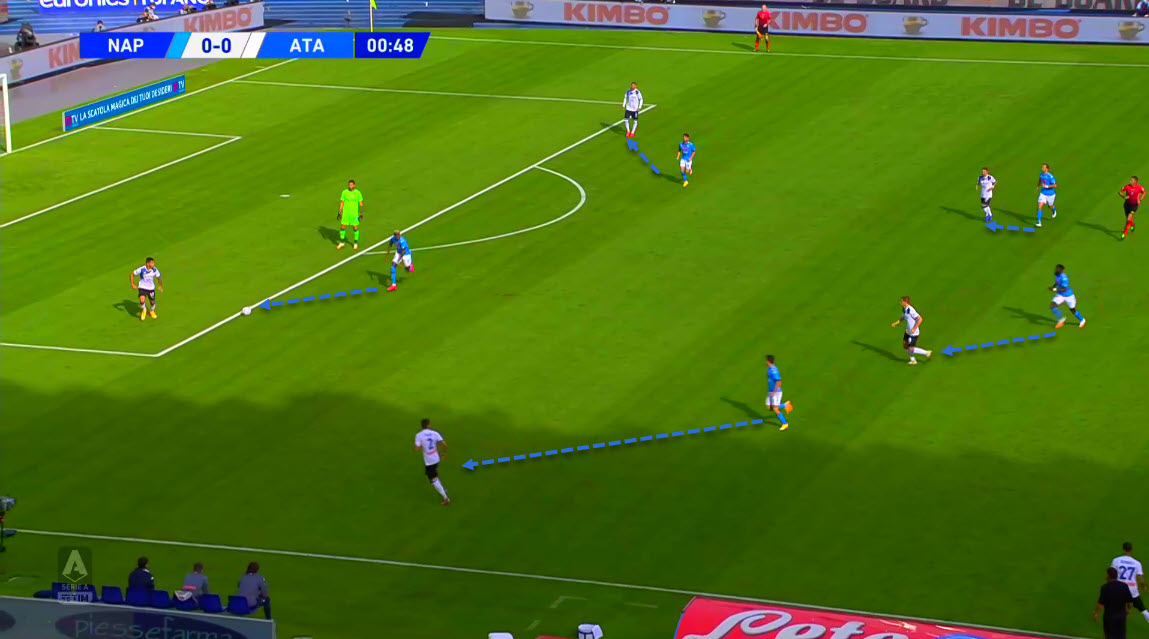 As we said above, Napoli played with two distinct formations; 4-2-3-1 in attack and 4-4-2 when defending. The defending formation was employed to tighten spaces for Atalanta, especially in the centre.

And that’s why we see both midfield and defence lines positioned close to each other to narrow central passing lanes and to stop any penetration attempts especially from players like Gómez.

Although Atalanta were successful at times in penetrating, this Napoli defending system was fundamental in stopping Atalanta’s powerful attack. The credit goes also to the four defence players and to Bakayoko and Ruiz as well because all of them were very attentive throughout the match. The only big mistake of this defence was in the Atalanta goal action. 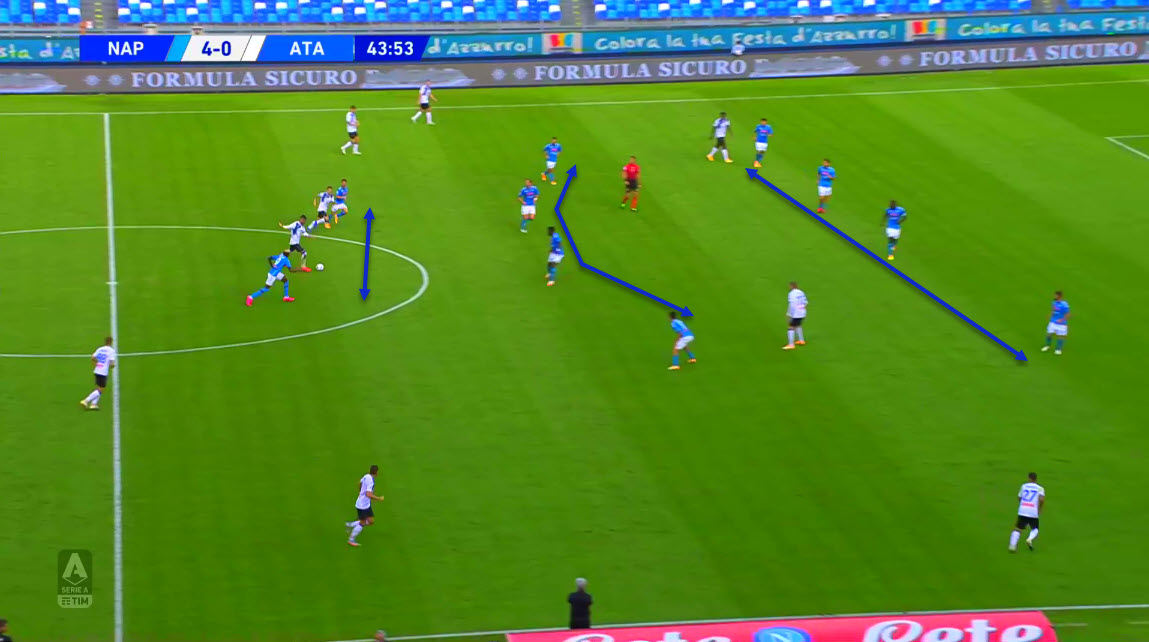 Due to a badly-timed intervention and wrong decision-making from Koulibaly, who had an excellent game despite this error, Atalanta found a lot of space behind defenders and there was no one to cover since Koulibaly was already on the ground.

And therefore, the subbed on Sam Lammers found himself in a one on one situation with Naopli’s goalkeeper, scoring Atalanta’s single goal of the match. 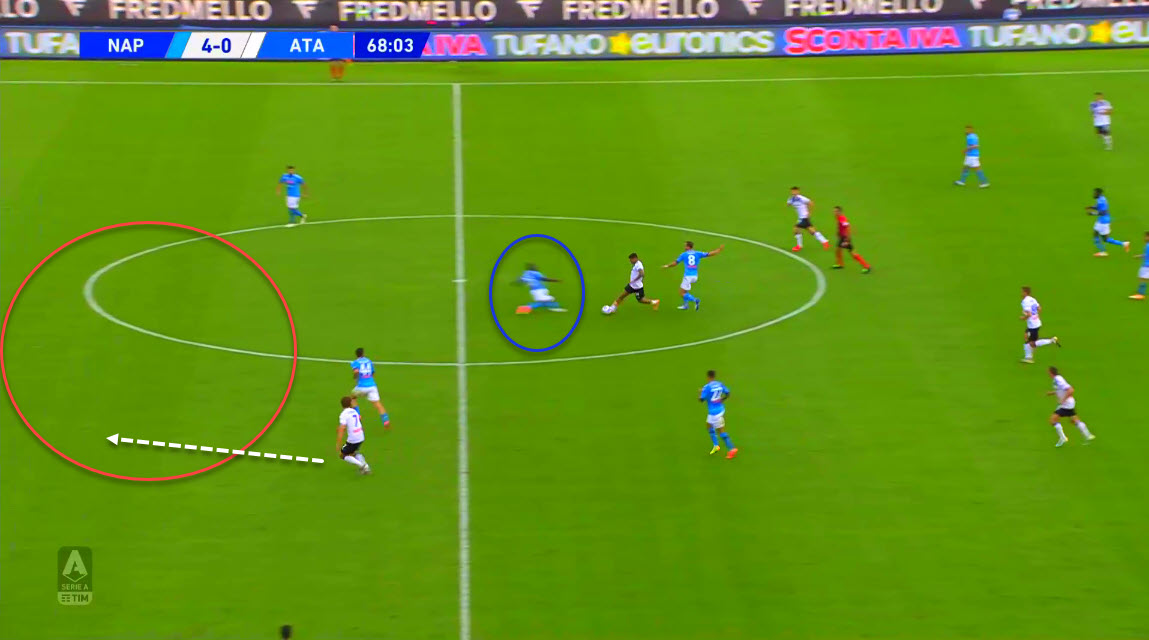 A humiliating loss for Atalanta

Atalanta started the game with determination to move forward and create scoring chances, but they were not able to do so due to Napoli’s organised defence. Also, struggling at the back in marking Napoli’s forward and losing possession so often made it difficult for them to play their usual passing combinations and move without the ball with ease.

And what made things worse was conceding a goal early in the game and failing in duels with Osimhen. In this regard, Romero for instance committed a lot of defensive mistakes against the Nigerian forward and it costed Atalanta the three points.

For instance, in this fourth goal action, Romero jumped to get the ball before it got to Osimhen, but he missed it despite being undisturbed. And this resulted in a gap in defence and Osimhen exploited this lack of organisation by going on to score. 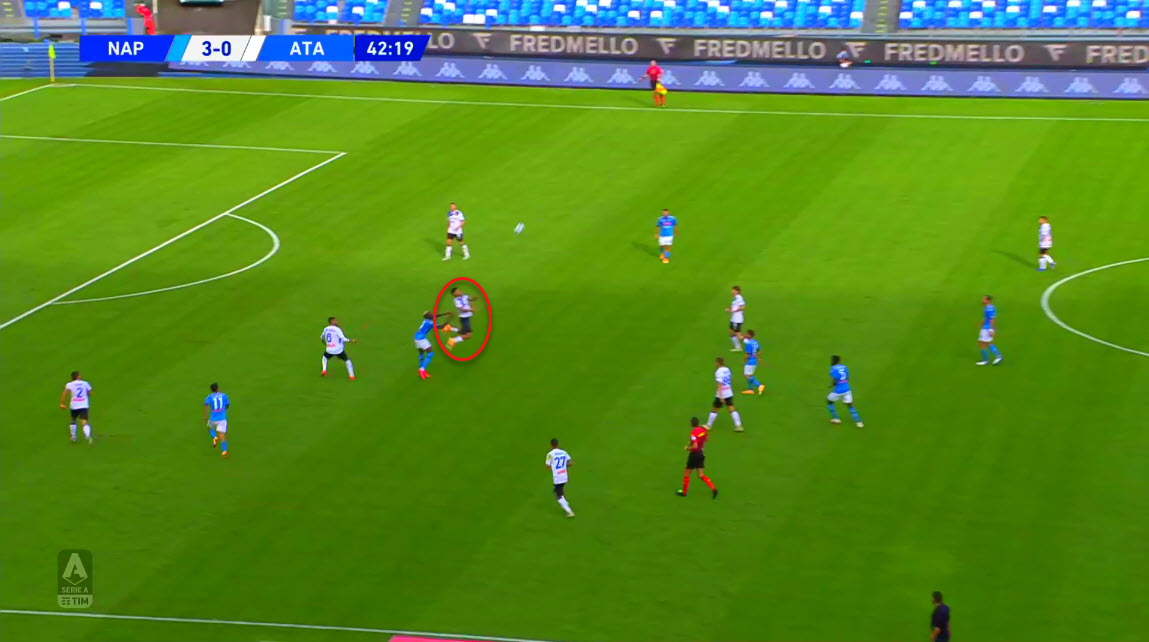 Even in this third goal action, another huge defensive mistake was made by Atalanta defenders and midfielders. When Politano cut inside and was penetrating centrally, it was clear that he was aiming to shoot.

Nevertheless, no one from Atalanta stood in his way to prevent him from shooting even though they were looking at him while he was advancing with the ball. And then he was allowed too much space to shoot and he scored. 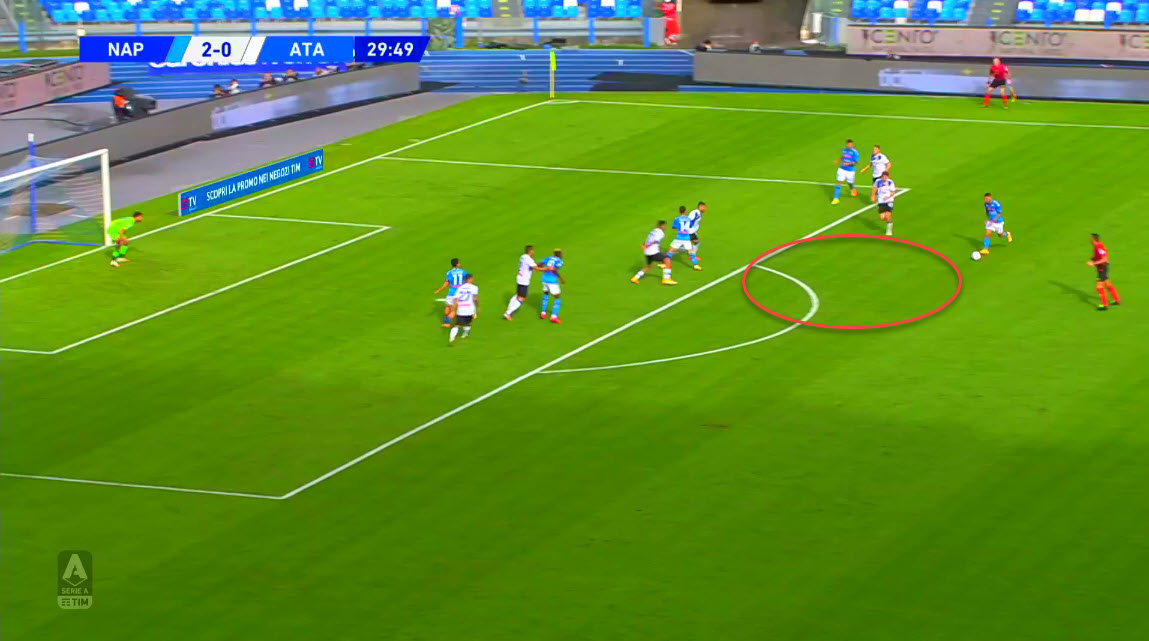 In attack, Atalanta did not find their usual form and they only had some desperate chances, especially from Gómez. Napoli’s powerful and attentive midfield made things harder for Atalanta since Zapata and Iličić were often marked and two or three players were always forming a barrier in front of them.

As you can see in this example, De Roon was waiting for someone to make a move without the ball but he found no one free, and therefore he was obliged to pass it to Iličić even though he knew that his pass will be intercepted since there were two Napoli midfielders waiting to anticipate that pass.

And this shows how difficult it was for Atalanta to pass Napoli’s midfield. 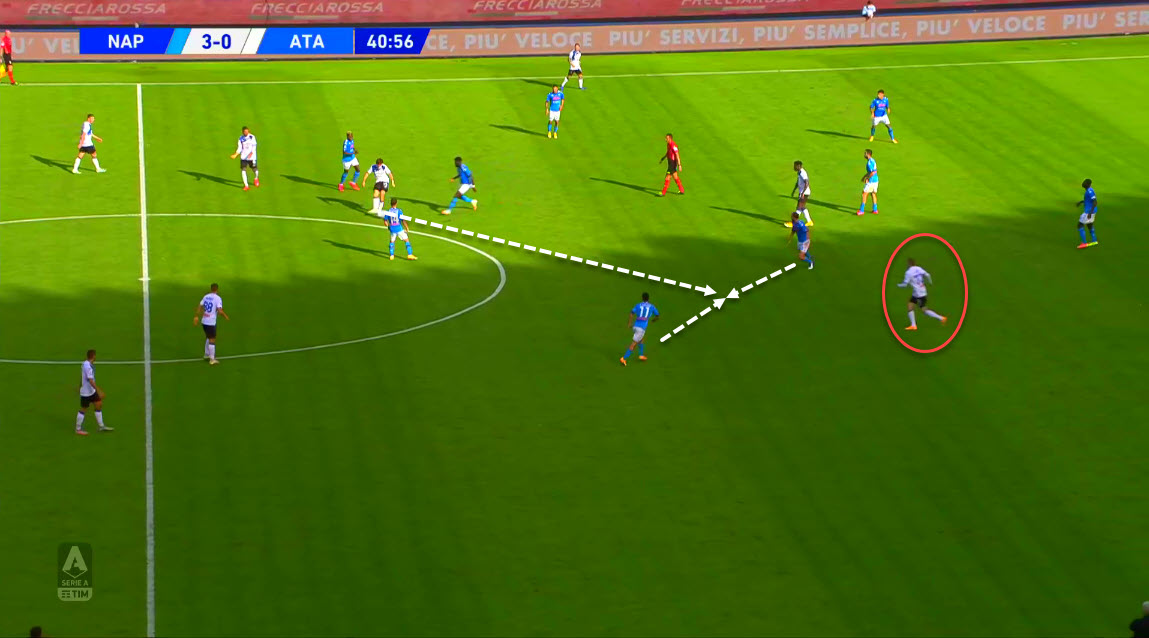 The only positive thing in this game was the excellent performance of Lammers, who scored a beautiful goal and was able to win some duels as well but he couldn’t do more by himself. Atalanta failed to make a reaction throughout the second-half and all their attacking options did not help in reducing the gap in the scoresheet.

Neither Luis Muriel nor Ruslan Malinovskiy provided solutions for the team and this led to Atalanta’s defeat without any real team reaction in the match.

Osimhen was the man of the match and was the source of all danger for Napoli. Even though he only scored the fourth goal, he contributed to the majority of Napoli’s scoring chances and disturbed Atalanta’s defence a lot.

In addition, Politano and Lozano were very agile on the wings and had very good games, with both of them scoring. Moreover, Napoli’s two central midfielders Bakayoko and Ruiz were crucial in stopping Atalanta’s attacking build-up and they deserve the credit for this win.

For Atalanta however, the team did not play well overall and most of the players were not in their best day of form. The only excellent performance was that of Lammers, who not only scored but whose movement casued Napoli issues, winning many duels.

It was a well-deserved win for Napoli, who needed this win a lot and it will serve them not only in gaining three points but also in getting back to winning ways and having the motivation to do even better in the next fixtures.

For Atalanta, the team should not feel down or stop believing in their chances of competing for the first spots just because of this loss. On the contrary, this match should serve as a catalyst for them to be determined to do better in Serie A and in Champions League and the team have got to fix their defensive issues as soon as possible to not lose more points when facing organised teams like Napoli.