Borussia Mönchengladbach welcomed VfL Wolfsburg to town as the teams returned from the international break to resume their Bundesliga play. Wolfsburg came in looking to secure their first victory of the season, while Gladbach looked to continue their winning ways. Ultimately, both teams had to settle for a 1-1 draw and a share of the points. 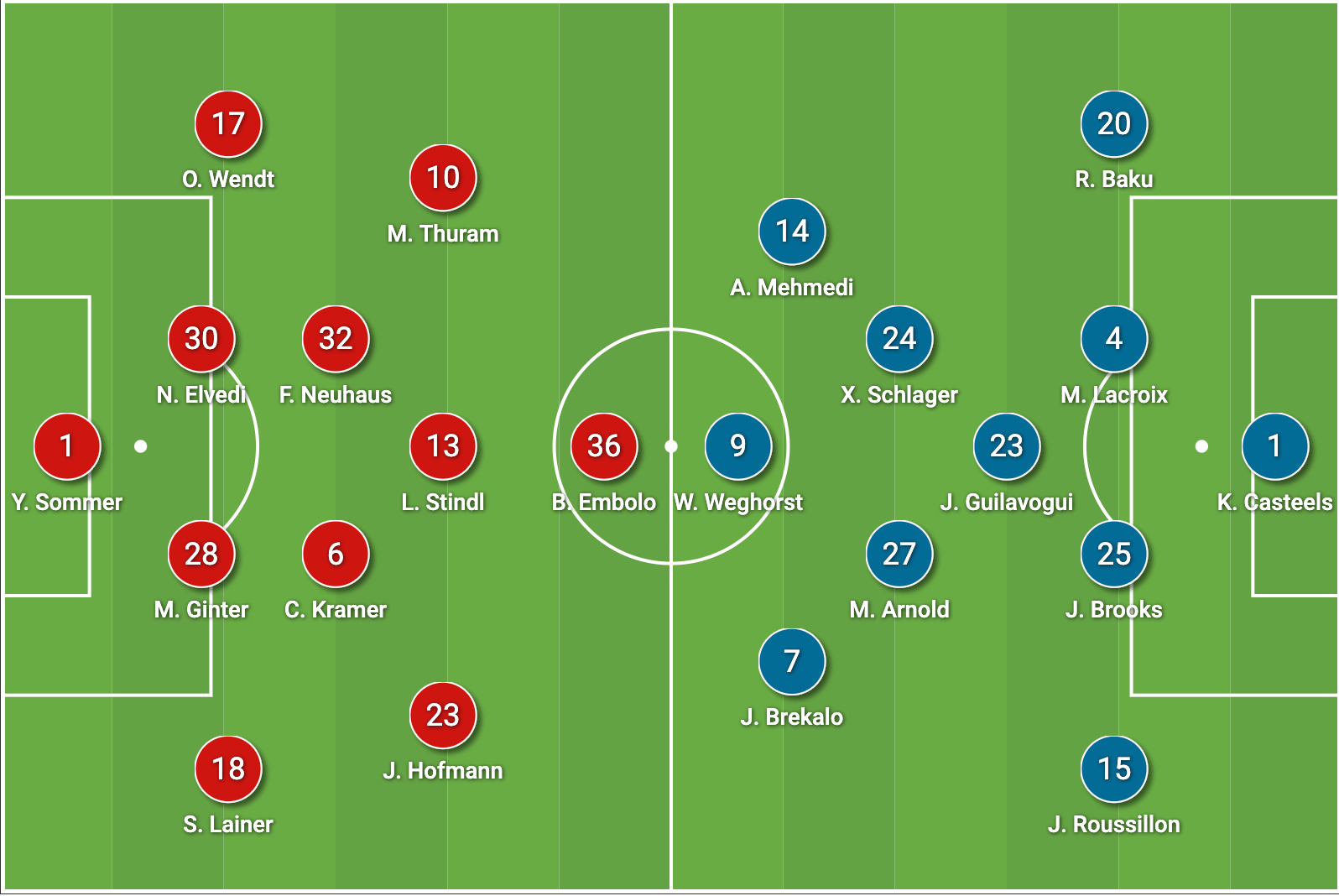 Marco Rose sent his squad out in a 4-2-3-1 with Yann Sommer in goal. In front of Sommer was the centre-back pairing of Matthias Ginter and Nico Elvedi, with Oscar Wendt as the left-back and Stefan Lainer as the right-back. Florian Neuhaus and Christoph Kramer anchored the midfield with Lars Stindl in front of the pair. Jonas Hofmann began the match on the right flank, while Marcus Thuram mauraded down the left side with Breel Embolo starting up top.

Oliver Glasner set his side up in a 4-3-3 with Koen Casteels in goal. Maxence Lacroix and John Brooks were Glasner’s centre-backs, with Jérôme Roussillon on the left and Bote Baku on the right of the pair. Josuha Guilavogui played as the defensive midfielder behind Maximilian Arnold and Xaver Schlager. Josip Brekalo started as the left winger as Admir Mehmedi started on the right, and Wout Weghorst led the charge as the team’s striker.

Gladbach had some success with pulling Wolfsburg up the pitch, but for the most part, Wolfsburg looked to settle into a midblock in order to try and control the match. This setup didn’t allow for much space in which Gladbach could operate, forcing players to move and lose some positional superiorities as a result.

Wolfsburg set up in a 4-1-4-1 structure, allowing their defensive midfielder, Joshua Guilavogui, the room to operate between the two defensive lines of pressure. This allowed him to mark Gladbach attackers who would drop down between the lines, as long as they were close enough for him to pick up. 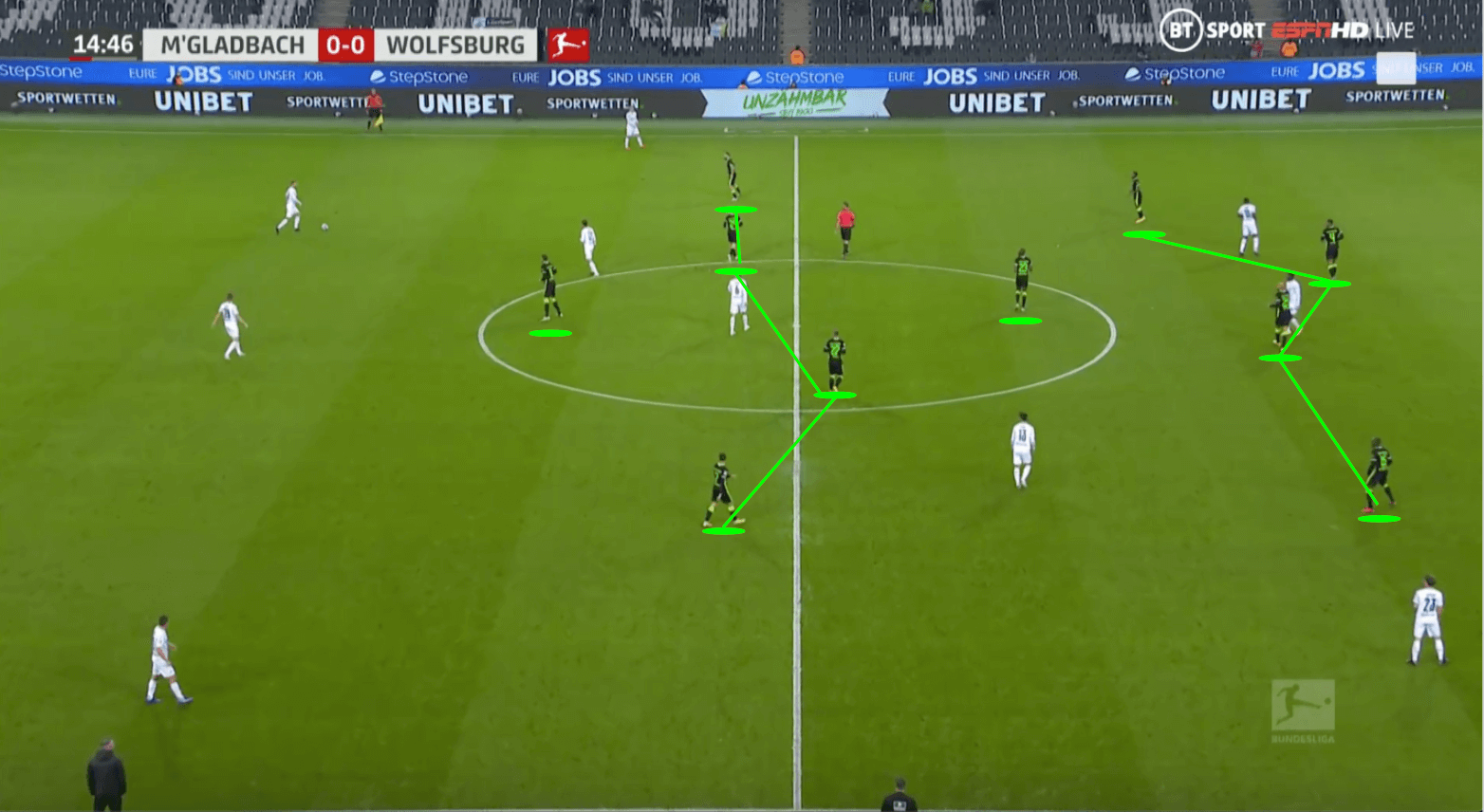 In the image above, Wolfsburg’s defensive structure is highlighted. What’s important to notice is their marking around Gladbach’s two central midfielders,  Neuhaus and Kramer. Schlager is close enough to Neuhaus to be able to press if Neuhaus is to receive the ball, meaning that Neuhaus would be unable to turn and be forced to play backwards. At the same time, Weghorst is blocking any passing lane into Kramer, who is also marked from behind by Arnold. Arnold’s distance is similar to Schlager’s in that he can put Kramer under immediate pressure if the ball is played to him. This prevented Gladbach from being able to progress up the centre of the pitch in any meaningful way for most of the match. 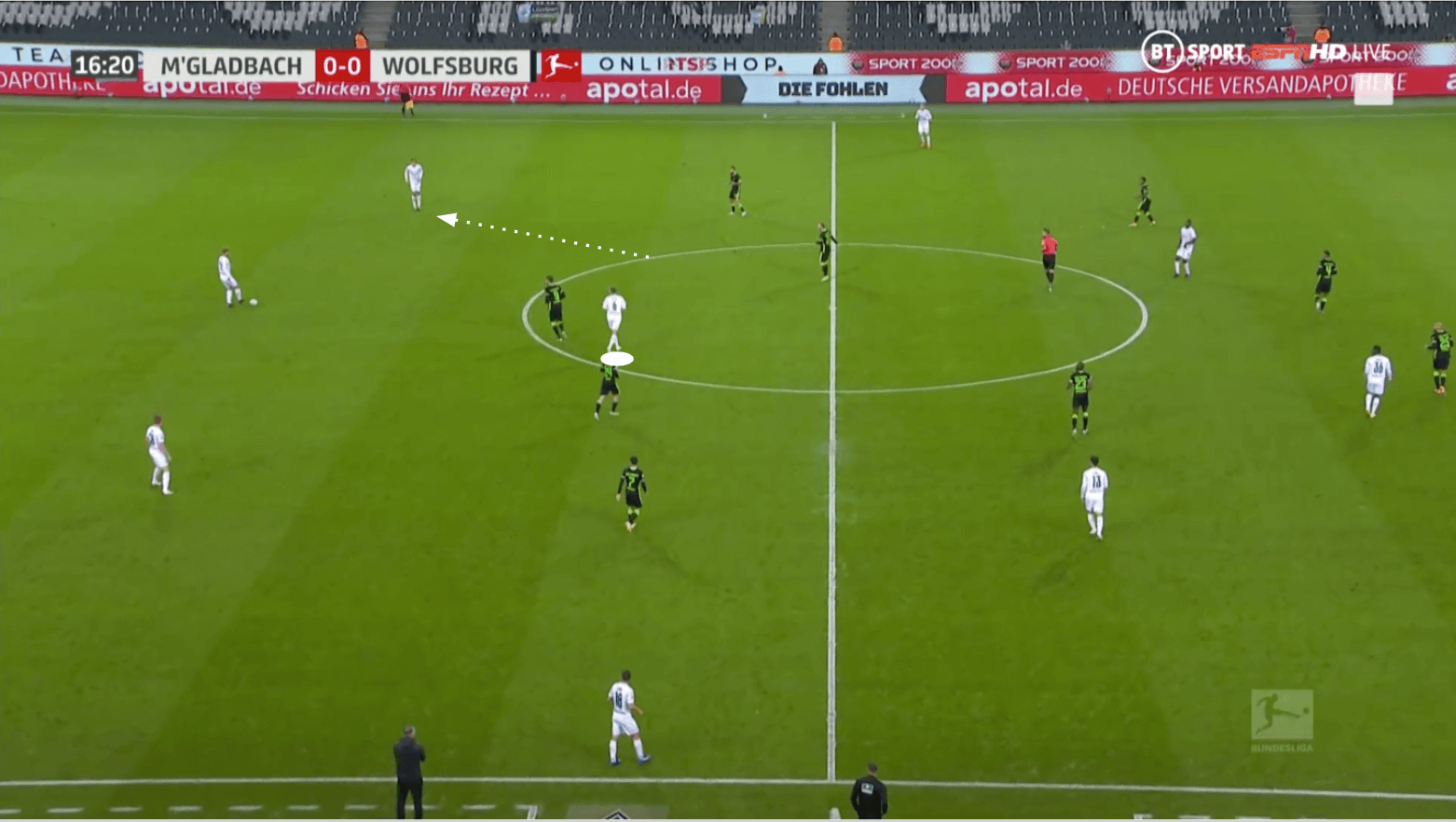 One of the ways that Gladbach tried to solve this problem is by having a central midfielder drop between their two centre-back,s in order to form a back three. In the instance above, Neuhaus dropped in to act as a right centre-back, although he wasn’t utilised in this particular instance and ended up returning to a more typical position. However, when Gladbach did do this, the problem became obvious. The lack of men in the centre of the pitch meant that Gladbach had no choice but to try and build up down the flanks. 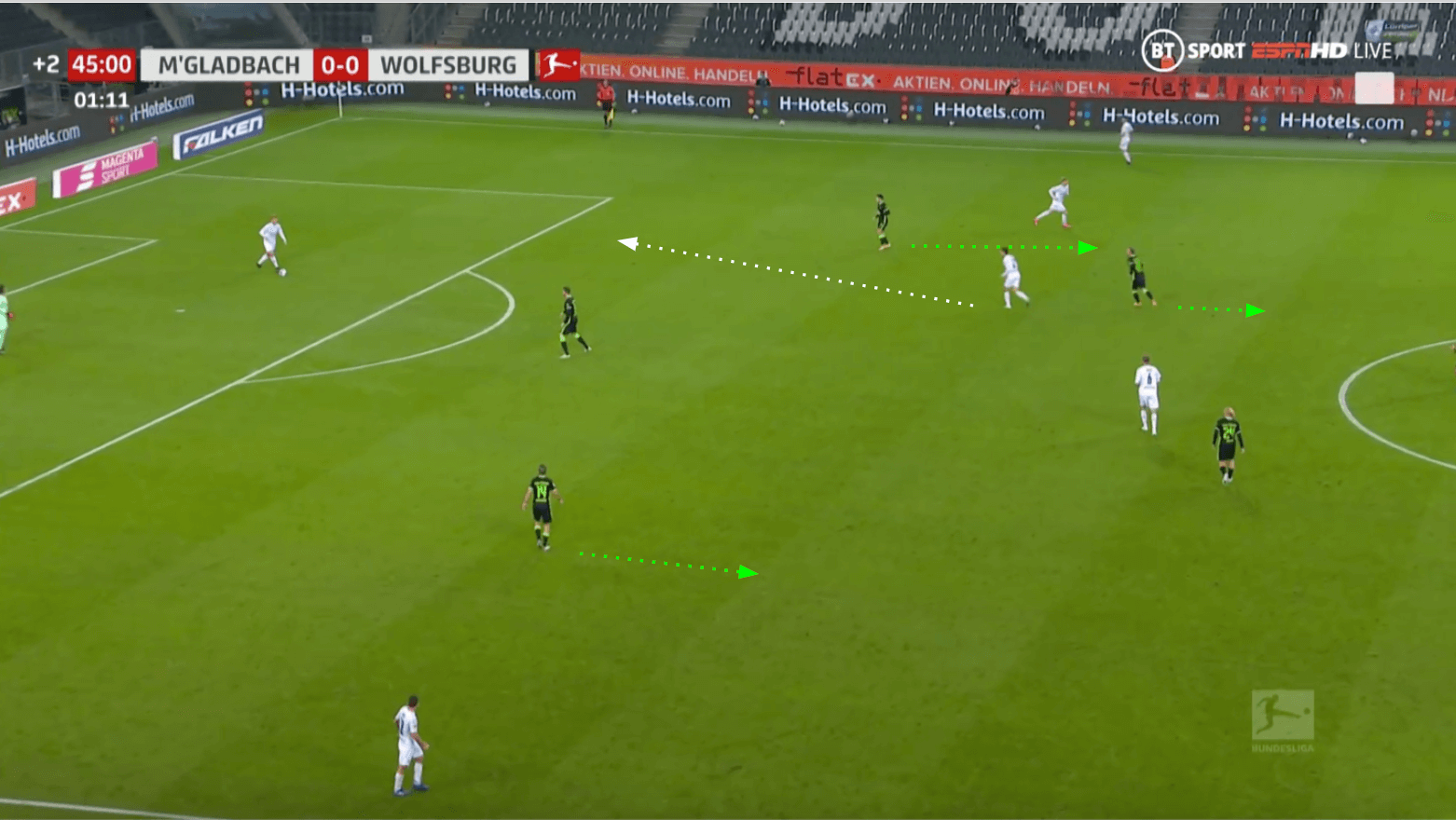 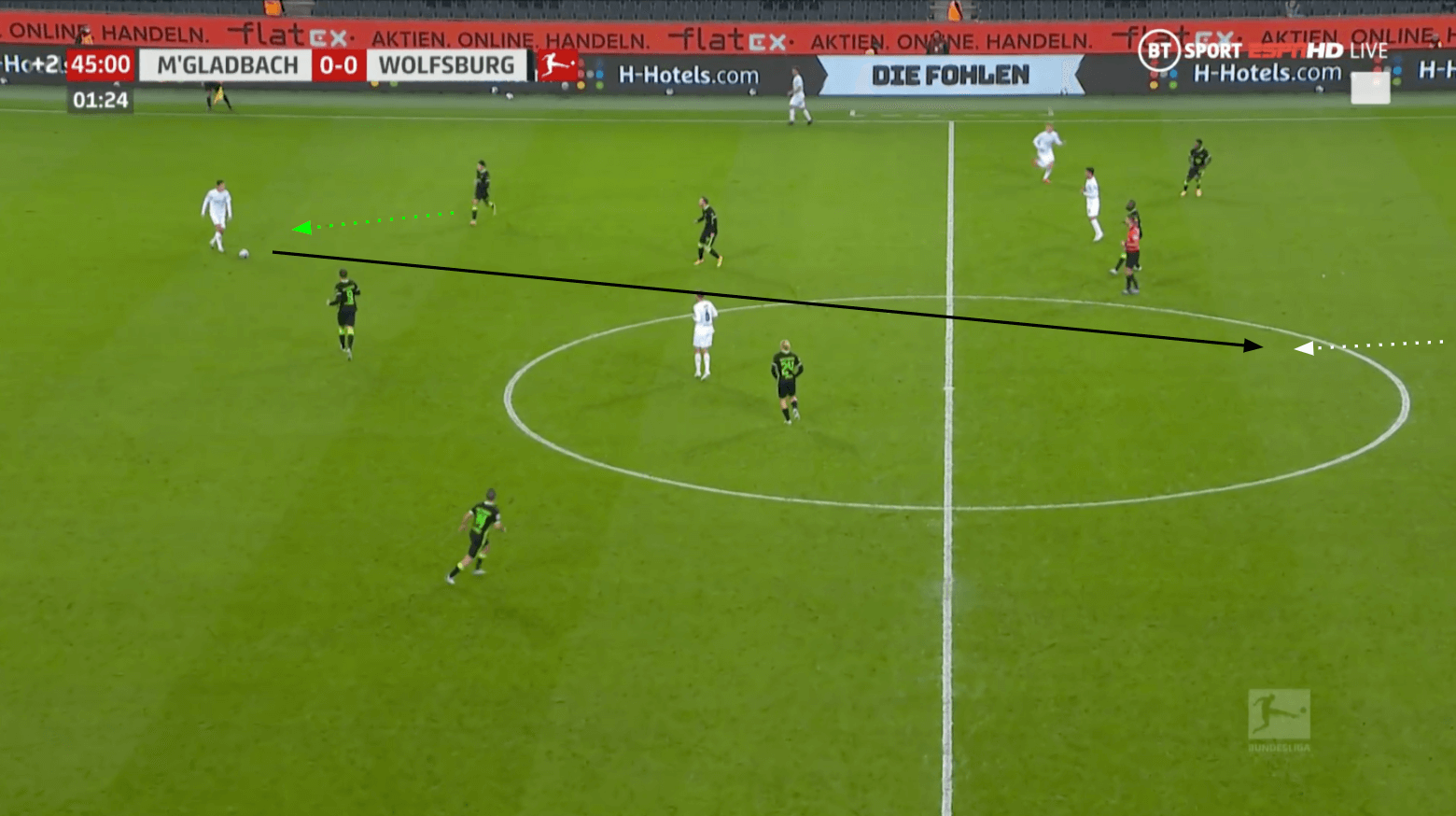 With Mehmedi pressing on his left side, while also preventing any pass to Wendt on the left flank, Neuhaus had little chance but to send a longer pass up the pitch. In this instance, Kramer wasn’t an option, due to the three Wolfsburg players surrounding him. So, Neuhaus tried to play a ball to Embolo, but he was unable to control the pass played to him. While they did have more men in the centre of the pitch, as Stindl and Embolo looked to provide some numbers back, a misplaced lay-off pass allowed Wolfsburg to win possession of the ball in the middle of the pitch and quickly counter Gladbach. Wolfsburg continued to invite these types of passes as the game progressed, looking to quickly gain possession in order to counterattack.

As the second half progressed, Wolfsburg continued with their midblock, but when they were stretched a bit more vertically, their central players were essentially baiting Gladbach’s backline into playing more dangerous passes. They did this by allowing for a larger part of space to open up to play into, then ultimately shutting down any potential passes there. This was incredibly effective in setting up counter-attacks for themselves because it would allow them to win back the ball in a very dangerous area (the centre of the pitch) at a time when Gladbach was not properly prepared to defend. 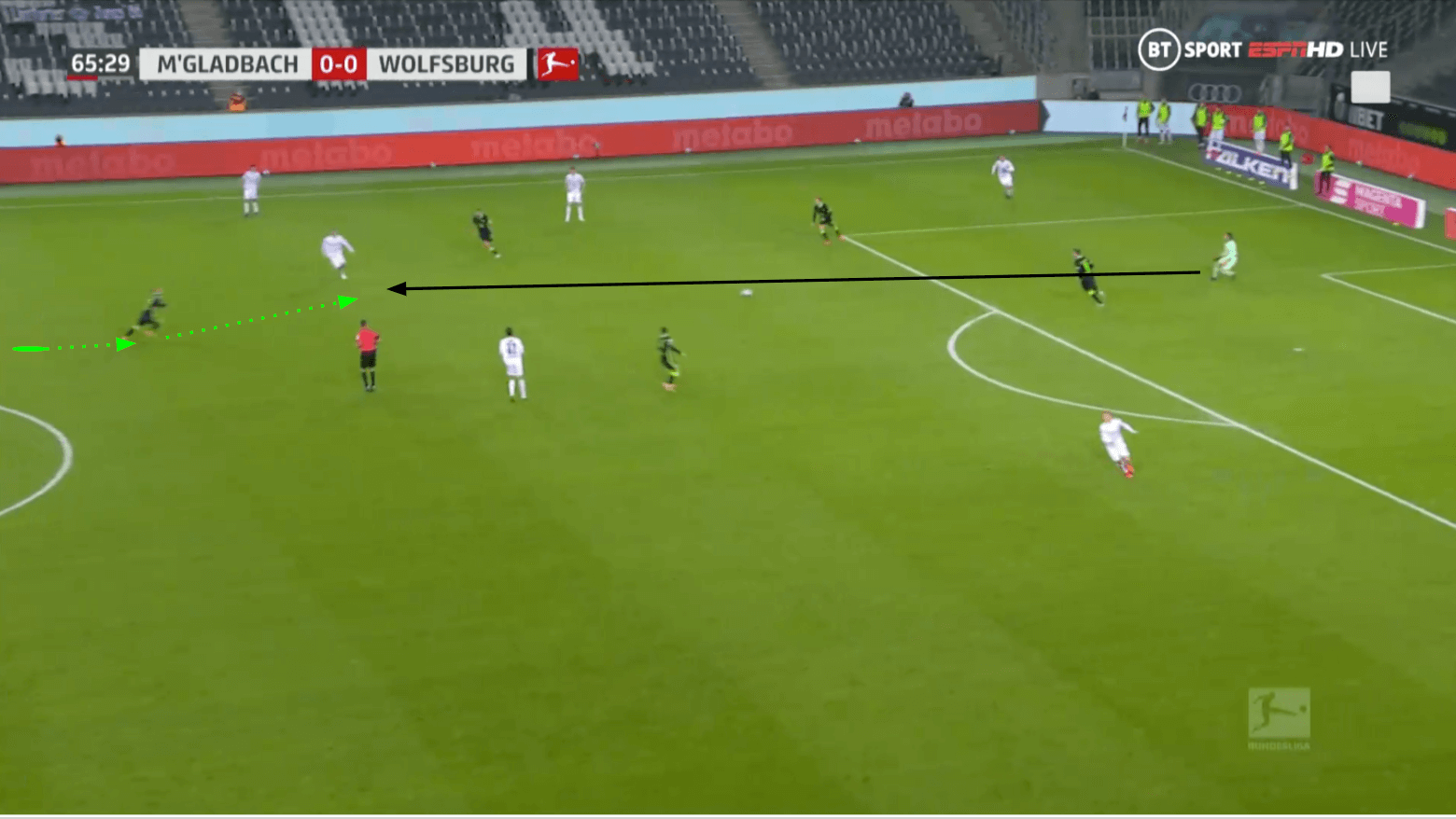 The image above highlights one of these baited passes. Arnold allowed a good amount of room to open up between him and Kramer, who had just made an excellent run off of his closest defender’s blind angle. Arnold watched as Sommer recognised Kramer’s availability, then burst into the space to intercept the pass. Even if Sommer’s ball had been perfect (which it wasn’t) Arnold still would have arrived at the same time as the ball, likely winning it in the process. 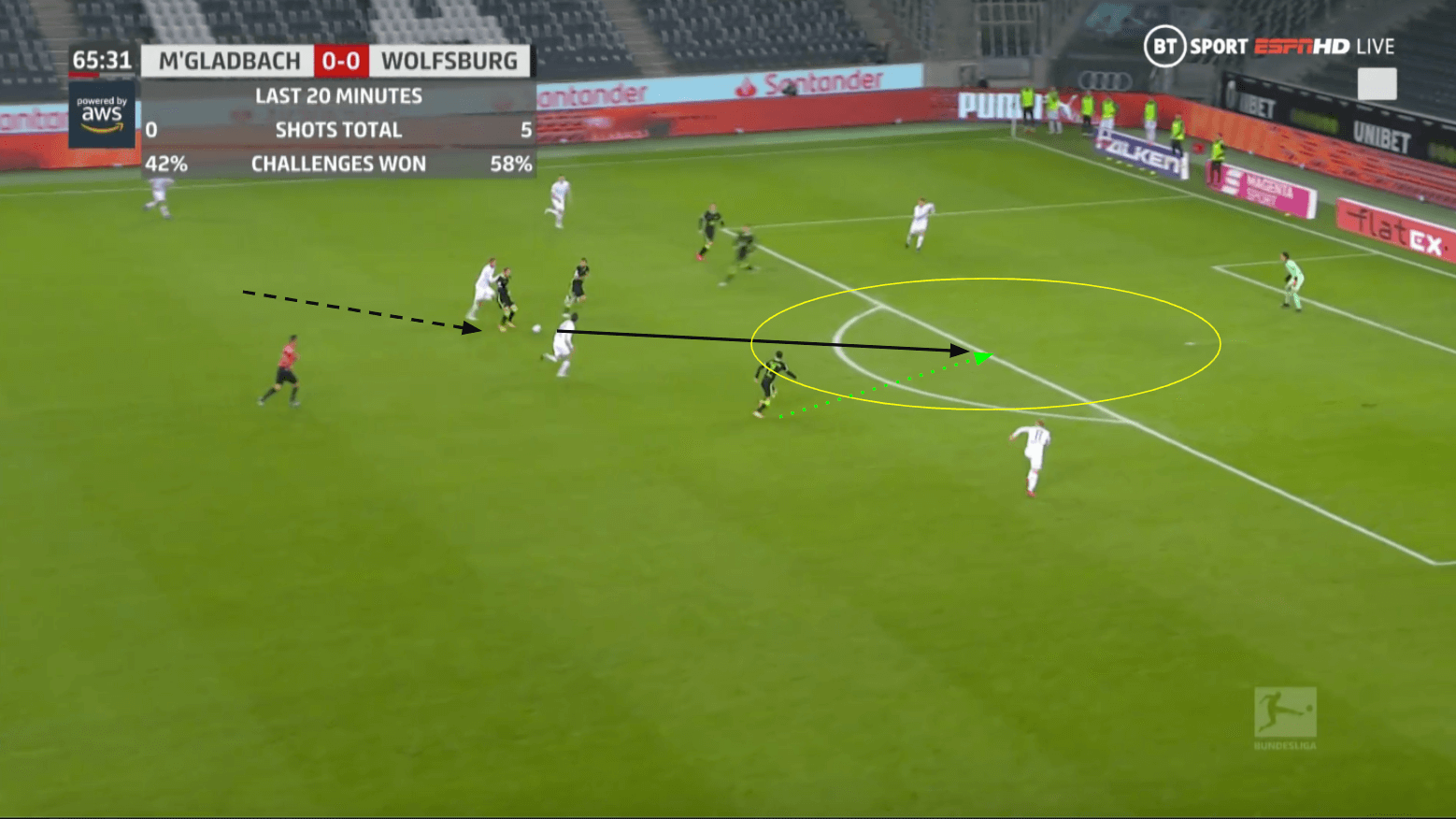 In this instance, he was able to essentially take it on and dribble. As the image highlights, there is a large amount of space for Brekalo to run into, and Arnold played him in perfectly. Unluckily for Wolfsburg, Brekalo’s shot was deflected out of bounds for a corner. 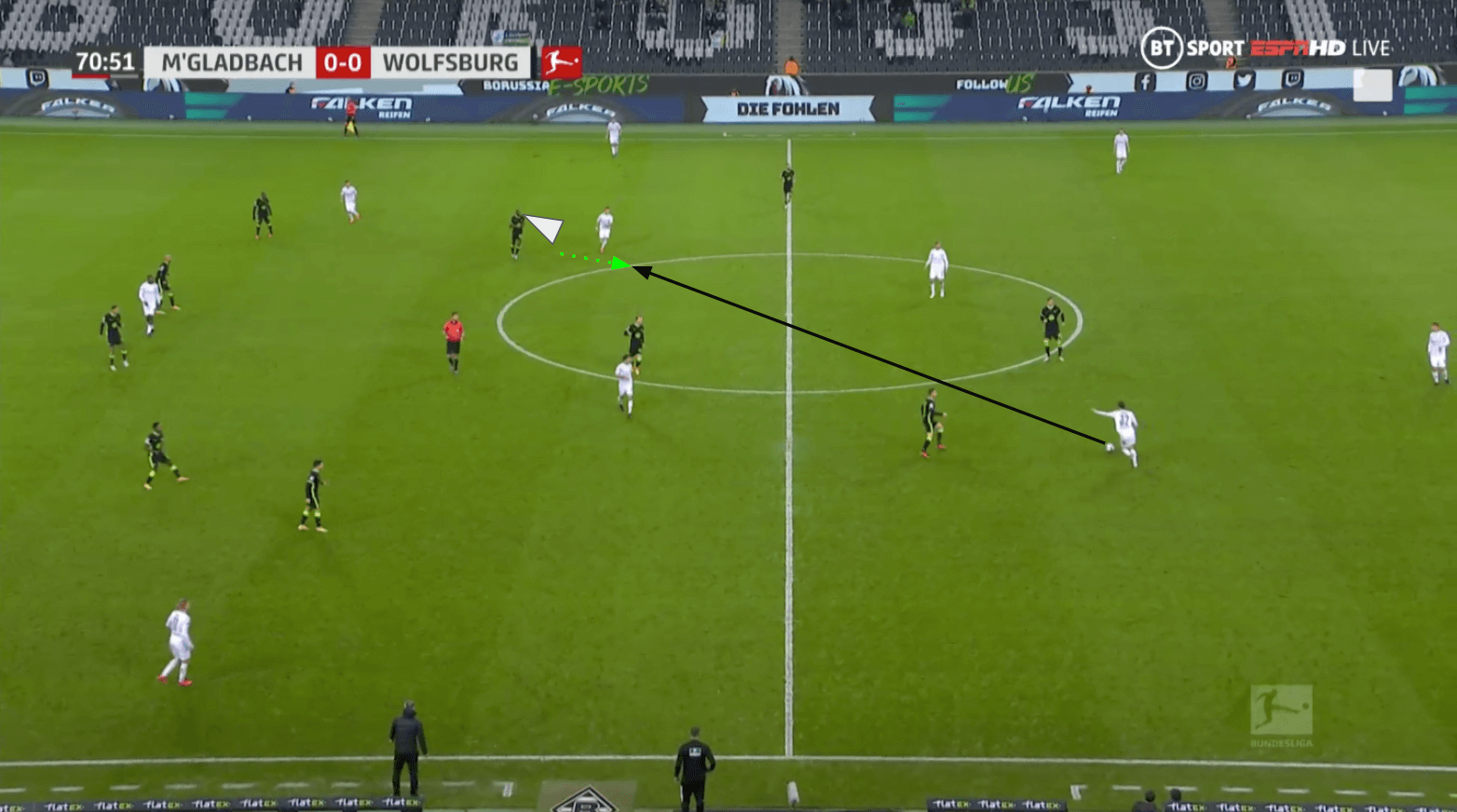 Josuha Guilavogui was excellent at goading Gladbach’s defensive players into passes that they shouldn’t have made. The first example is shown above. Here, he is keeping his distance from the player to his left while watching Neuhaus on the ball. Because he could see the ball and his man, Guilavogui had all the advantages a defender could want. Based off of Gladbach’s style of play, this was likely intended to be a third-man pass, with Kramer receiving the pass facing forward in the middle of the park. Instead, as soon as Neuhaus went to pass, Guilavogui immediately closed down his man and got to the ball first. He used his first touch to control the ball and his second to play it forward, initiating what could have been a counter-attack if not for Weghorst playing the ball backwards after receiving it from Guilavogui. 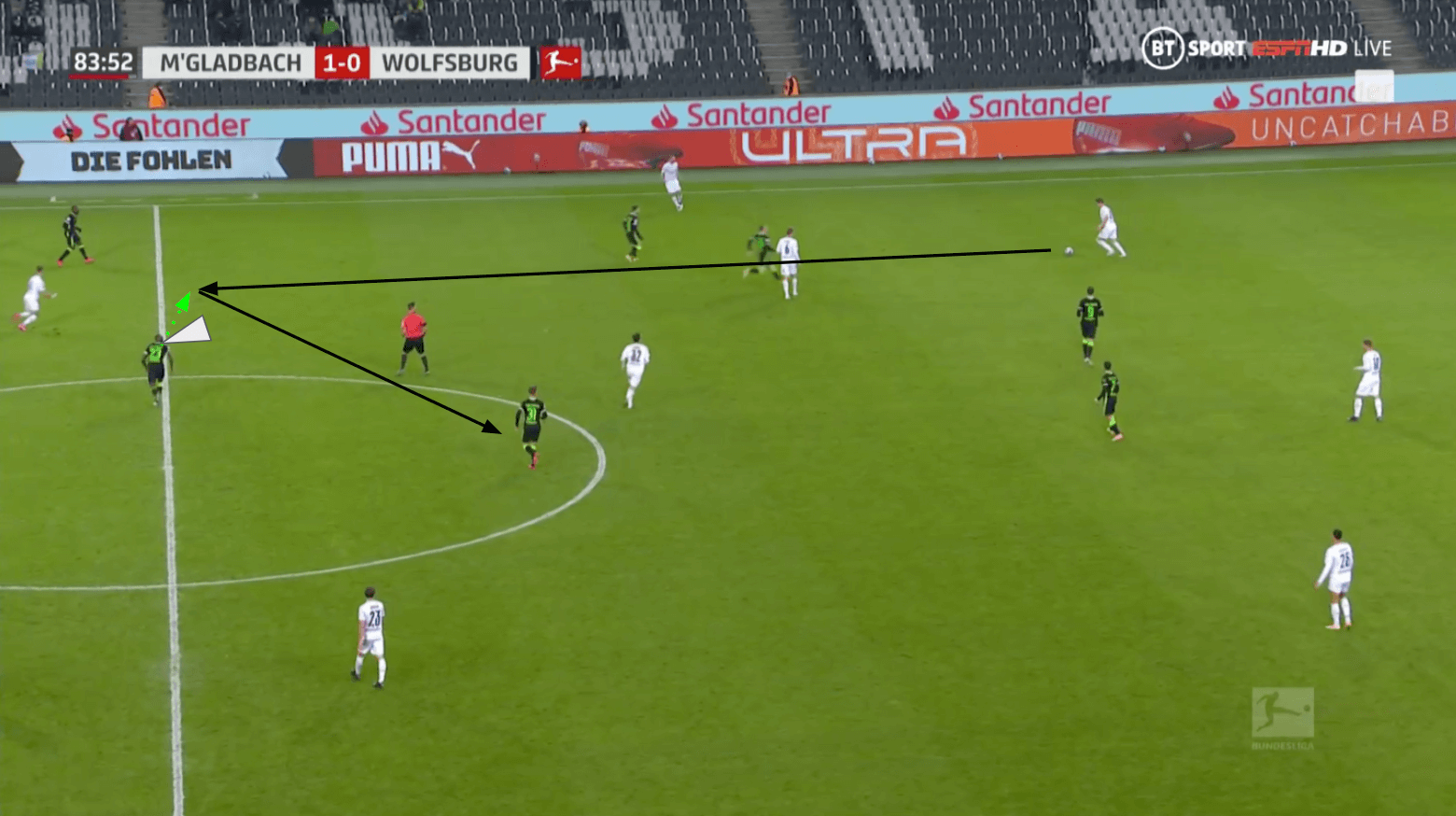 When Wolfsburg scored their goal, the entire move started with Guilavogui. Gladbach was initially in possession as they entered the middle third of the pitch. As Ginter looked to pick out a long pass, Guilavogui again read the eyes and the intentions of the passer. And again, Guilavogui was able to intercept the pass before it arrived at its intended target. As he got to the ball, Guilavogui was immediately able to find a teammate who wasn’t under pressure. This allowed Wolfsburg to switch the field and attack down the right flank. Because of the quick counter-attack, Gladbach’s back four weren’t able to remain compact, and Weghorst found himself in pocket of space between Ginter and Tony Jantschke, who subbed on for Lainer. Weghorst finished off the chance with his first touch, and Wolfsburg found a way back into the match thanks to some well-timed interceptions in the middle of the pitch.

While Gladbach did struggle to establish themselves in the centre of the pitch, they did well to try and invite Wolfsburg’s pressure. This would allow space to open up behind their defence, where they could bypass the pressure in the middle of the pitch and still get in on goal. 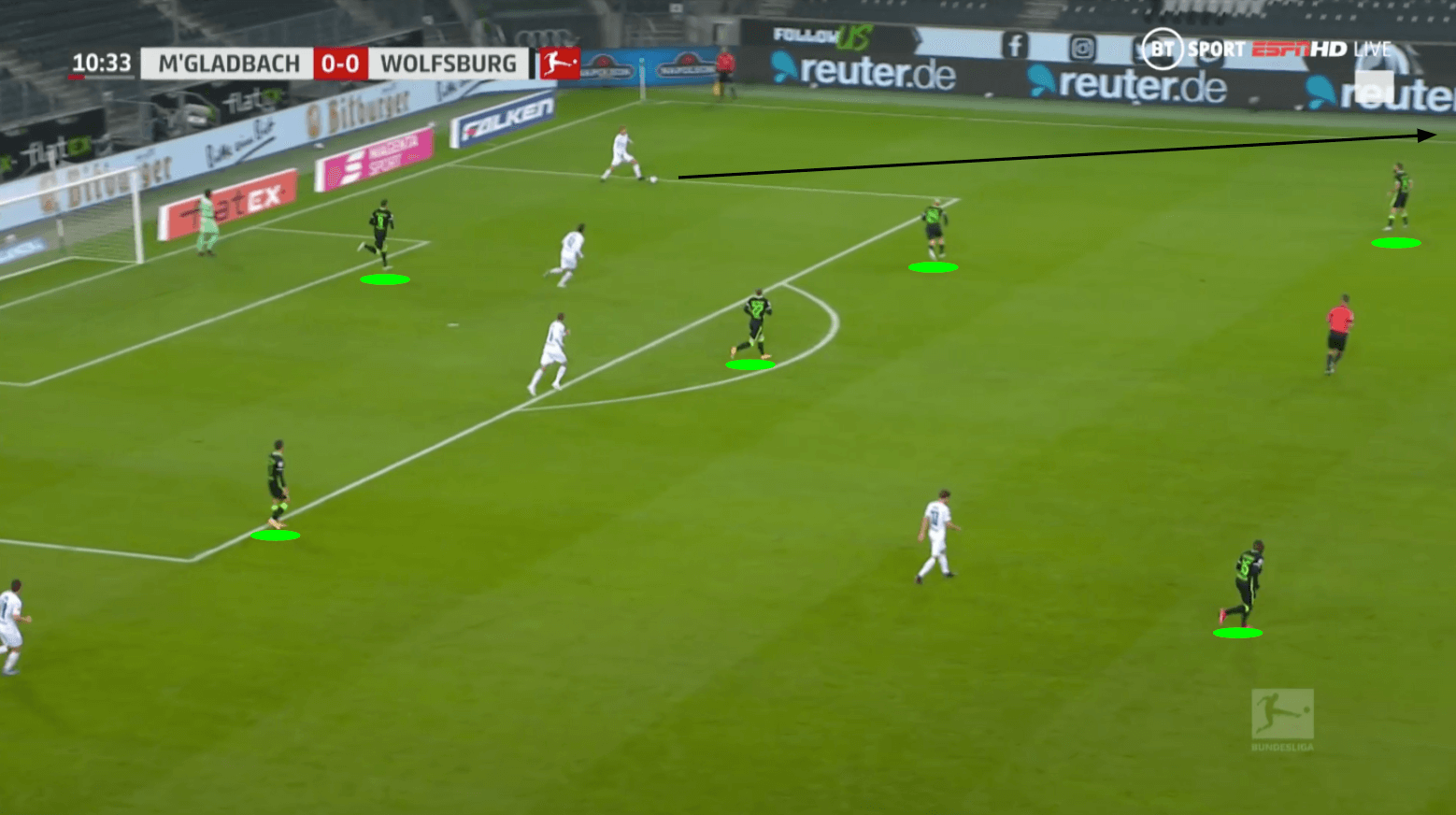 Off of a goal kick, Gladbach used their two centre-backs and holding midfielders in order to invite the Wolfsburg press. As the image shows above, Wolfsburg sent six of their players forward to press high up the pitch. As Nico Elvedi had the ball at his feet, it was clear that there was enough of an advantage high up the pitch that it was worth sending a 50/50 ball. Sure enough, Gladbach ended up with possession after a poor header from Maxence Lacroix, and seconds later Thuram was in a 1v1 battle inside of Wolfsburg’s box. While his shot ultimately went off of the side netting, the potential for danger was there. 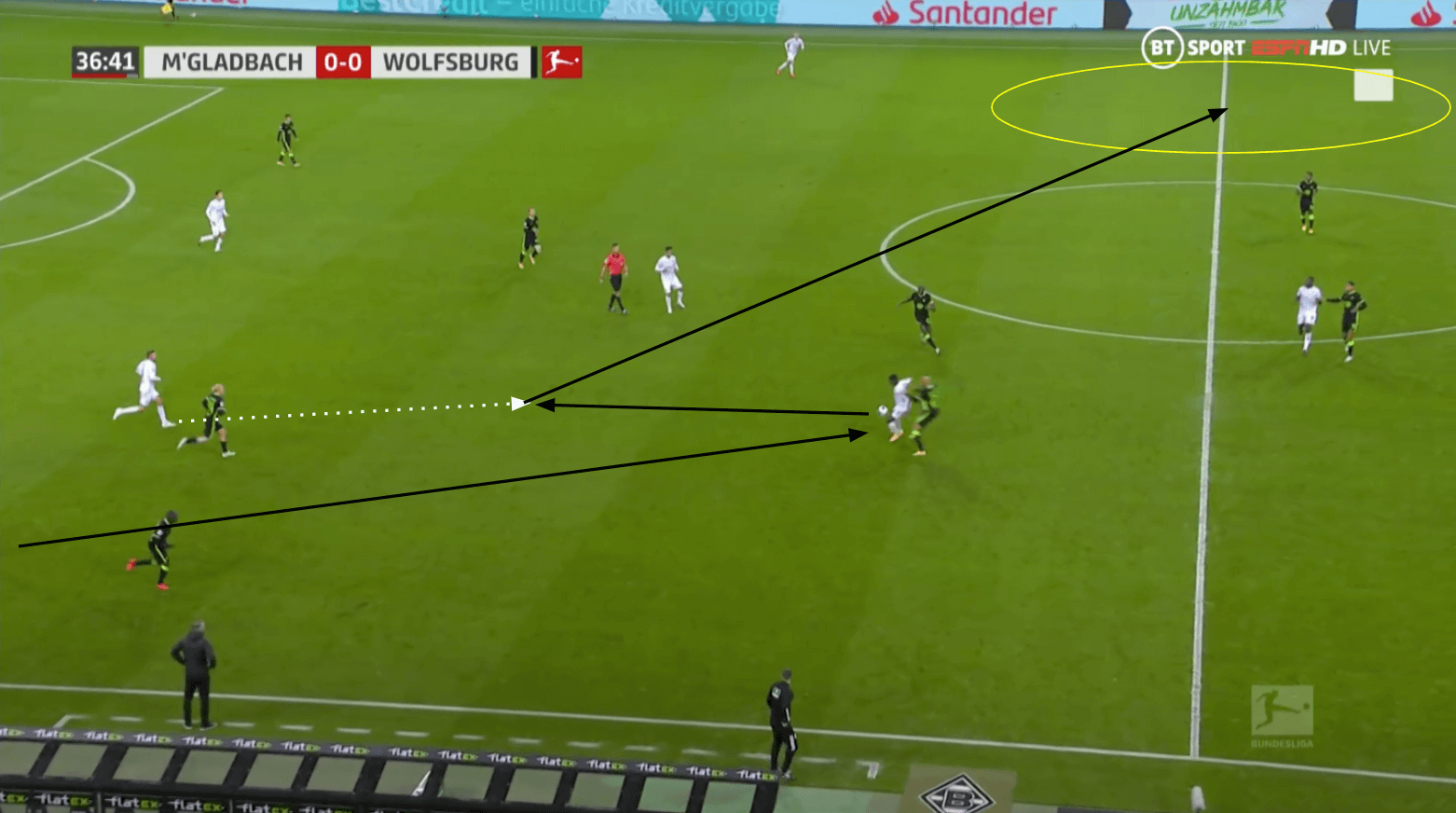 Later in the match, off of another goal kick, Gladbach were again able to invite Wolfsburg to press high up the pitch. This time it was on the right side, but the effects were the same. As Lainer was put under pressure, he sent a long aerial pass to Embolo, who was able to control the ball, despite the pressure on his back. Embolo laid the ball off to the third man (in this case it was Kramer) to give Gladbach a man on the ball running at the defence with time and space. From there, Kramer was able to recognise the space on the left flank, and he delivered a pass to Wendt. Stindl had made a great run into the left half-space, but Wendt’s pass was played behind him and the attack fizzled out. While Gladbach’s goal came off of a penalty, the quick counter-attack that was sprung by a long curled pass by Neuhaus was certainly a moment of Gladbach taking advantage of Wolfsburg committing men higher up the pitch, albeit Wolfsburg were previously attacking and not pressing when Gladbach countered.

Both teams will ultimately feel frustrated with the result as Wolfsburg were looking to find their first victory of the season and Gladbach looking to build off of their success in last year’s campaign. While the season is still young, both sets of supports will be expecting more points in the future. Gladbach’s next match is in the UEFA Champions League against Inter on Wednesday; Wolfsburg will get a full week’s rest as they do not play again until next weekend, when they take on Arminia Bielefeld, who lost to Bayern Munich 4-1 at the weekend.