The first week of the UEFA Champions League featured Manchester City facing Porto at Etihad Stadium. This game was the return to the big stage for the Portuguese team after winning the double last year. For the home side, Pep Guardiola was in his 5th year in charge, hoping to give the Citizens the first European title.

In this tactical analysis, we will dive deep into the wide range of tactics used by Pep when in possession to break compact defences. This analysis will also show how did Porto manage to nullify the Citizen’s tactical prowess. Pep teams keep showing flaws in their defence, and we will expose those weaknesses unveiled by Porto. 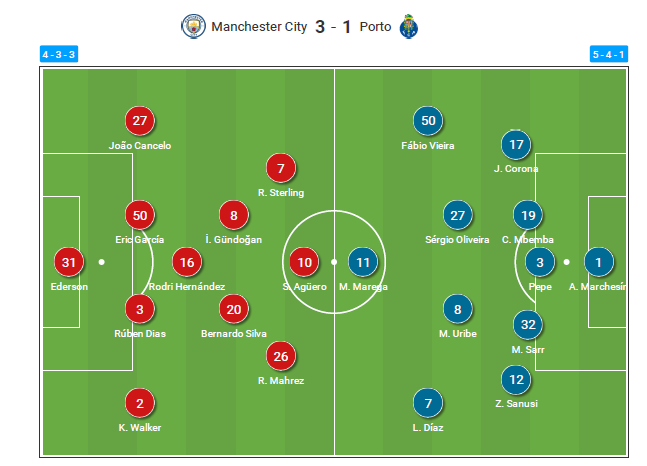 Pep lined up a 4-3-3 formation making only two subs from their win against Arsenal in the Premier League. Èric Garcia took Nathan Aké’s position pairing the newcomer Rúben Dias as centre-backs. The second change came at midfield with İlkay Gündoğan in Phil Foden’s position. The front three remained unchanged with Riyad Mahrez, Sergio Agüero, and Raheem Sterling as the captain.

Manchester City dominated the ball possession for most of the game with 66% of ball possession, as they are used to when playing against a team of lower ranks. We see different tactical formations on Pep teams when in possession, and this game was not an exception. Pep settled the team when in possession in an asymmetric shape. Kyle Walker took the right centre-half position forming a back-three line, and Rodri stayed as the lone pivot. The second two lines, which formed the 3-1-3-3 or 3-1-4-2, were positioned in an asymmetric shape, using three players on the left while just two on the right. On the right, only Maherz was left isolated (not in the shot), with Bernardo Silva positioning in the right half-space. Meanwhile, João Cancelo, İlkay Gündoğan, and Sterling occupied the wide lane and the half-spaces on the left. As depicted in the following picture, Cancelo mainly positioned wide, with the remaining two tucking in. 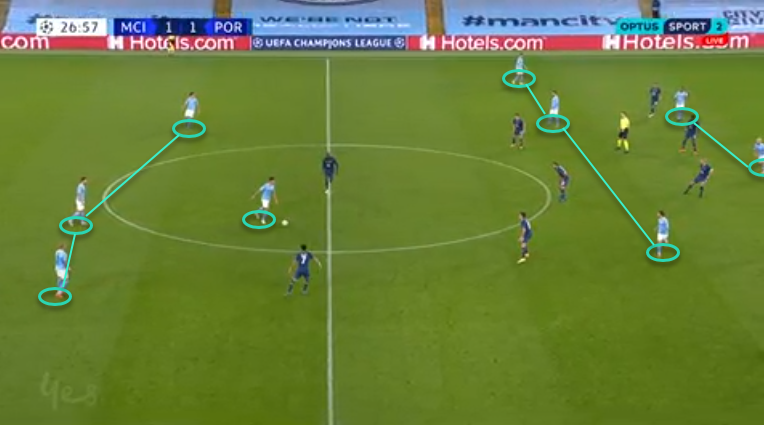 This asymmetric shape gave the Citizens a different way of exploiting each side. We saw a more positional play in the left, advancing with the ball and creating overloads to progress the ball. With the centre-back progressing the ball on the left side, Agüero would also join to create a numerical superiority, as shown in the next picture. Simultaneously we can see a clear example of the positional superiority of Pep tactics in this picture. Before Garcia progresses the ball, the Citizens already had a positional superiority. Being 4v4 Gundogan’s positioning was instrumental as he positioned behind the lines. Should the centre-back play a through ball, it would beat two players creating a 3v2 in the backline; that is the essence of Pep positional play. 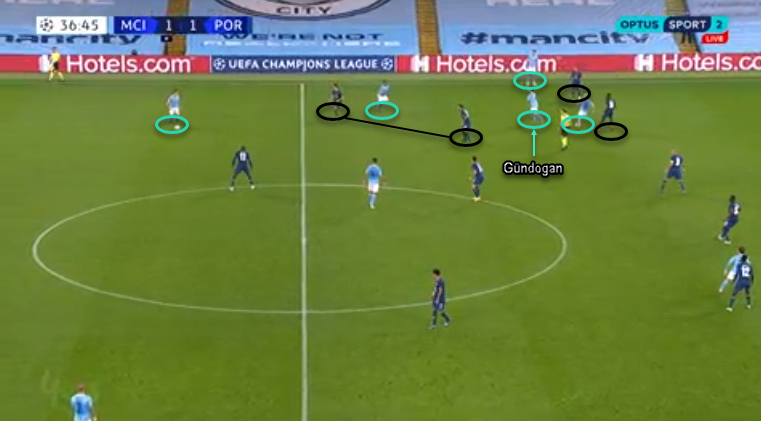 This overload used on the left side unfolds Pep’s well-known tactics “overload-to-isolate.” As we saw, the Citizens involved many players on the left side, provoking the defensive team to shuffle to the side, giving the other side Citizen’s players space. Shifting the ball to the isolated side, Pep team could exploit their player’s quality on 1v1 or 2v2. The next picture is an example of the space generated for Silva and Mahrez to receive the ball in a 2v2 situation, with the Portuguese assisting the Argelian behind the defensive line. Using Mahrez 1v1 dribbling attributes or both players’ combination, the Citizens relied on a qualitative superiority to exploit the right side. 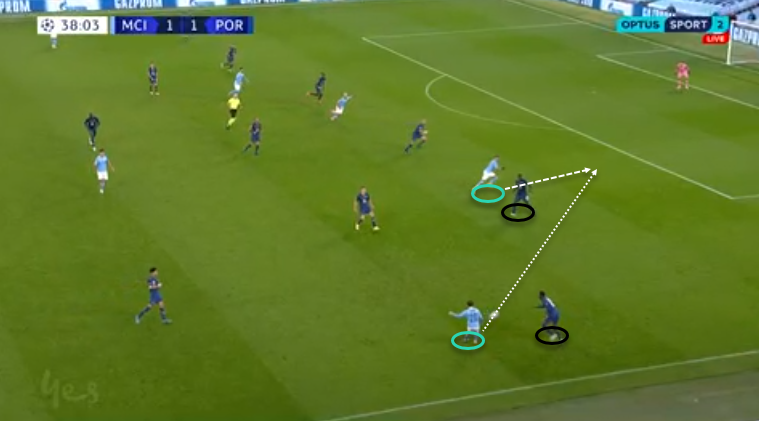 Finally, we saw another tactic used on the right side when in-possession depicted in the next picture. Rodri would drop deep, taking the right centre-back position, giving Walker space to stay higher. With Silva and Mahrez tucking in, we can see Walker’s room on the weak side to receive completely isolated. His participation in the final third was not only through isolated plays but gave in some occasions a numerical superiority involved in the attack by surprise without being tracked. 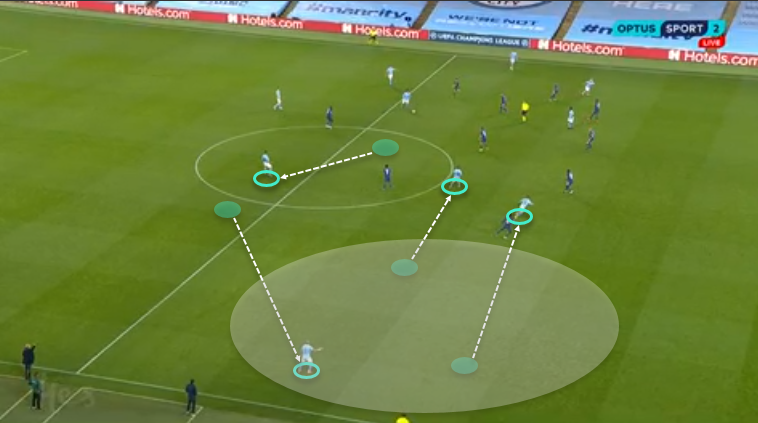 Porto overcameCitizen’s tactical prowess, conceding just a few scoring opportunities. Even though the Citizens dominated the ball possession, they could not break the Portuguese team’s defensive block. When defending, they withdraw in a compact-low block in a 5-4-1 formation, as shown in the next picture. We can see a zonal mark as none Citizen player is being man-marked. The middle line did a fronting job while defending, cutting off forward passes in between the lines. We can also see that the compactness gave only space wide for the Citizens. 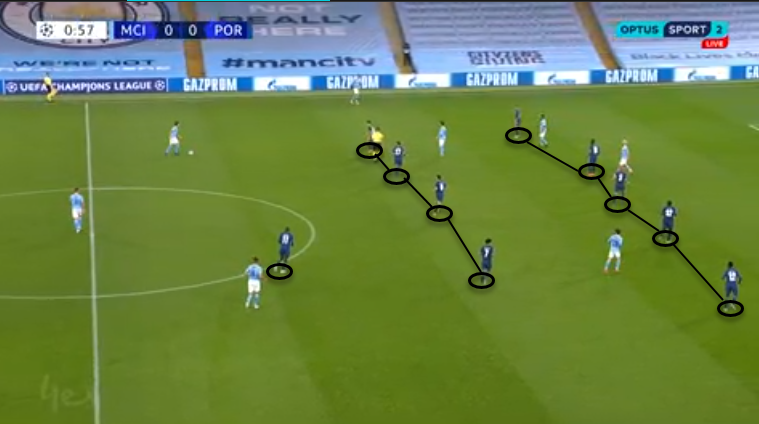 When the ball was in possession centrally, one holding midfielder would press higher in space-oriented man coverage. Under this defensive style, the midfield players will press the ball carrier entering its space. The side players will support the midfield pressing higher, covering his back and blocking the forward pass, as shown in the next picture. If the ball went sideways, the pressing player would withdraw, retaining the compactness. This space-oriented coverage allowed pressuring, the periphery while maintaining the compactness. Marega, in the front line, played an instrumental role in blocking Rodri, forbidding one of Manchester City’s best players to distribute the ball. 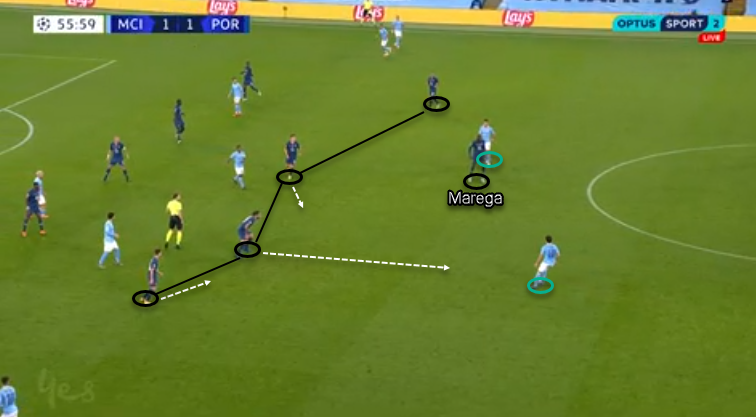 If the Citizens played the ball wide, Porto would shuffle to the ball-side, with the wide mid pressing the ball receiver. Simultaneously, he will receive support from the wing-back, centre-half, and the holding midfielder, creating a box as shown in the picture. Porto used attacking players in the wide-midfield as Diaz and Vieira. Through these defensive tactics, Porto wide midfielders lack of defensive attributes were overcome by the inside players’ support. The defensive box also reduced the space for the Citizens players positioned in the half-spaces on the strong-side. 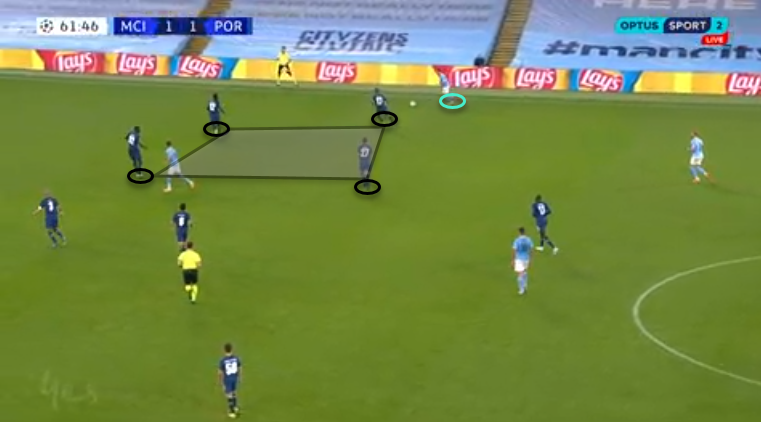 It took 73 minutes for Manchester City to break this defensive structure, not considering the first goal’s sloppy mistakes and the second coming from a set-piece. It was a tactical move that allowed the Citizens to create the necessary chaos in Porto’s compact shape to score. With the ball in possession on the left side, City’s left positioned players rotated their positions, creating the necessary space as depicted in the following snapshot. Pep substitutes made this rotation, with Foden occupying the left advance midfielder position and Ferran Torres the left-wing. Cancelo and Foden tucked in, committing the wide defensive players, giving Torres space to receive. The press arrived late, providing time to combine with Foden in a 2v1 situation, collecting the ball in the penalty box for the Spaniard’s first Champions League goal. 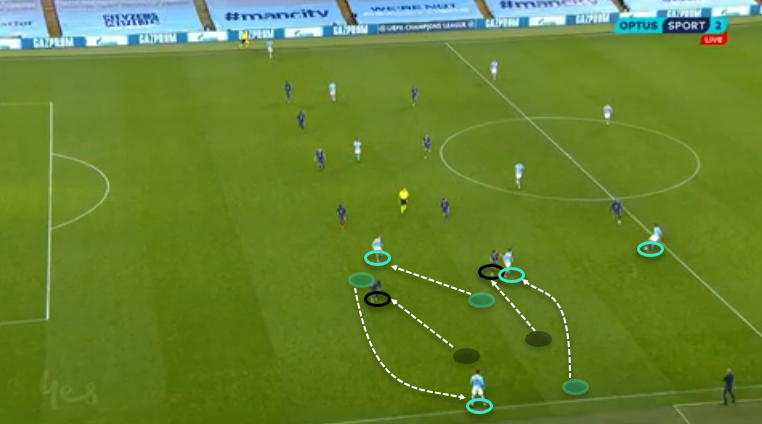 Since Aymeric Laporte frequently gets injured and with an ageing Fernandinho, Pep has not found a solution to their defensive weaknesses. 18 have been the consecutive games in which the Citizens haven’t finished a Champions League game with clean sheets. This game was not the exception, allowing  Porto to score even though they only had a few chances. As shown in the next picture, Porto’s goal started with Dias forcing a pass between the lines. He was not highly pressed, and the receiver was tight marked. This was an unforced mistake without playing against a high pressing team. 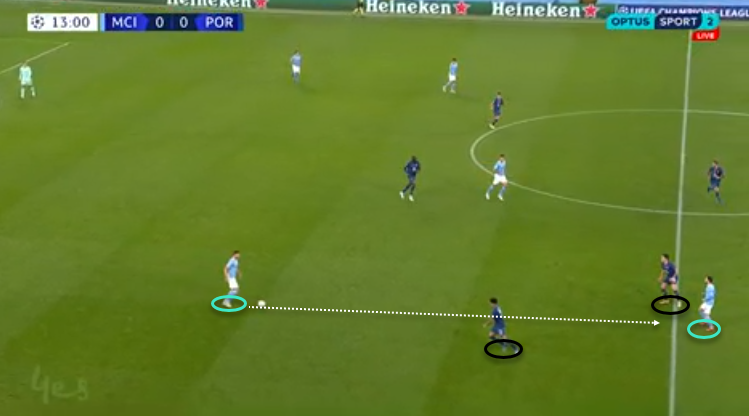 This same play ended up in a counter-attack. The Citizens were well positioned in a 5v3 situation, as we can see in the next shot. Albeit, Porto scored by a diagonal run of Diaz getting into the box without being challenged. On the right, Vieira committed Cancelo with his forward run, and Diaz only had to outplay Rodri with his pace. None of the centre-backs stepped up to press the ball carrier before entering the penalty box, even though they were not marking other players. 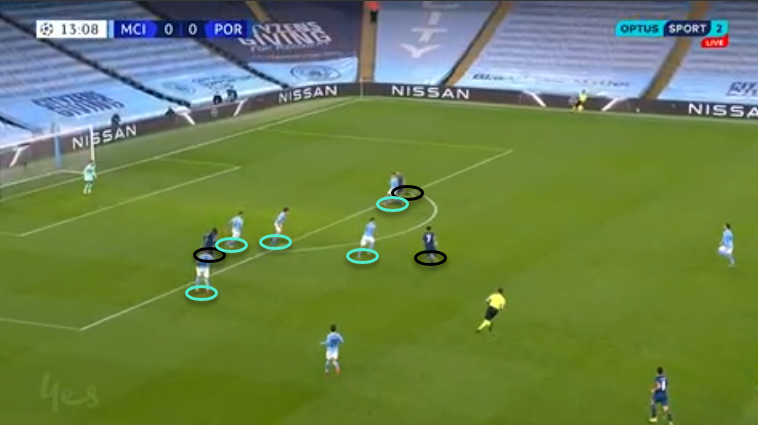 Last but not least, we show on the next shot another mistake in the defensive line of the Citizens exploited by Porto striker. With Vieira receiving the ball, he was late pressured by Cancelo, this being the first mistake. The second mistake was again in the centre-back line, with Marega able to collect the ball in behind the backline. Garcia did not give enough cover to Cancelo, allowing the through ball, simultaneously Dias allowed Marega to be on-side and did not track his run. 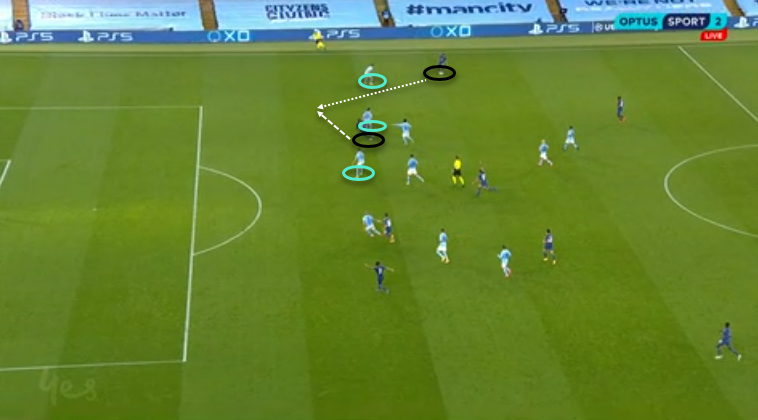 The variety and complexity of the tactical strategies that the Citizens used under Pep keep developing, making them unpredictable when in possession. Last year defensive weaknesses seem to stay have stayed unchanged, however.

Porto played a defensive game, using their counter-attacks remotely, scoring from an unforced mistake on the Citizens defence. Playing against the likes of Manchester City provokes you to switch-on and be aware of the tactical shifts throughout the game, as one chance is enough for them to take the lead, as happened in this game.