On Tuesday, Atletico Madrid welcomed Bayern Munich to the Wanda Metropolitano stadium, looking for a win that would send them to the next round. But even with a highly rotated German squad, the hosts could only get a point for their troubles despite the overall dominance throughout the game.

This tactical analysis will dissect both teams’ tactics and show you just how the game played out in this thrilling UEFA Champions League event.

Diego Simeone had to field a very strong XI to beat Bayern Munich. Of course, Jan Oblak was in goal and interestingly, Atletico Madrid were set up with a five-man backline just ahead of the Slovenian keeper. Yannick Carrasco was the wide man on the left but even though he’s pictured as a left-back here, that would only ever be true in the defensive phases of the latter stages of the game.

He was joined by Mario Hermoso, José Giménez, Stefan Savić, and Kieran Trippier in the backline. In midfield, Simeone opted for Saúl Ñíguez, Koke, and Marcos Llorente. Finally, up front, Ángel Correa and João Félix led the Rojiblancos’ attack.

On paper, Atlético Madrid were deployed in a 5-3-2 formation but that would shift constantly throughout the game. 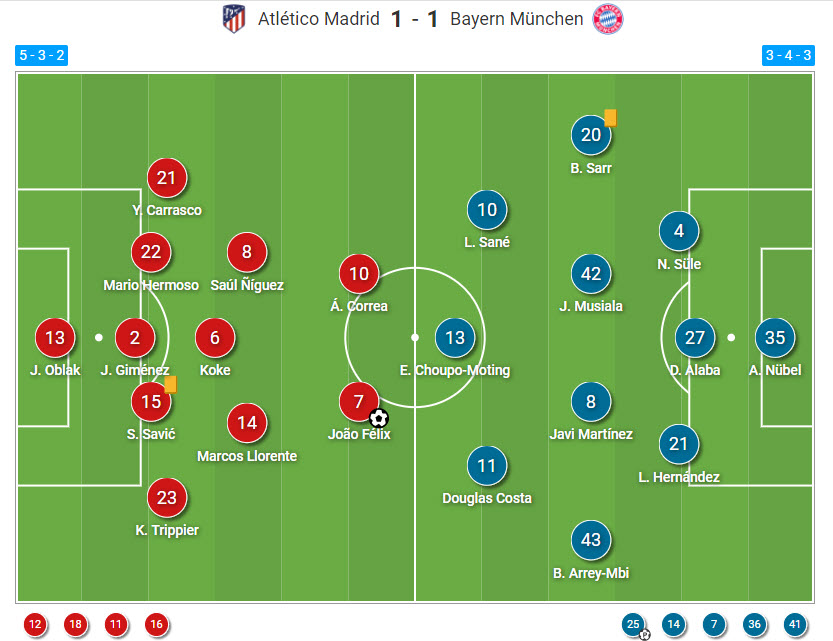 Hans-Dieter Flick had little to play for in this clash, that much has to be said, so he decided to field a team of reserve players and youngsters. Alexander Nübel was chosen ahead of Manuel Neuer and was covered by a three-man backline of Niklas Süle, David Alaba, and Lucas Hernandez.

Interestingly, Mbi was both a Champions League and Bayern debutant for this match, Musiala got his first-ever European start, while the substitutes like Angelo Stiller made their competition debut and Joshua Zirkzee and Chris Richards tallied their second appearance in Europe.

The rotated Bayern Munich side was deployed in a 3-4-3 formation.

Atlético Madrid’s dominance on the ball

We’ll start the tactical analysis by looking at Atlético Madrid’s attacking tactics and how Bayern Munich tried to counter them. This season, Simeone is slowly but surely transforming the Rojiblancos in a dominant side on the ball and for the majority of the game, the Germans could not handle it.

In possession, Atlético Madrid would shift into a three-man backline as Hermoso accompanied the centre-back duo in the first phase of attack. Ahead of them were both Saúl and Koke, forming a 3-2 structure in the build-up. 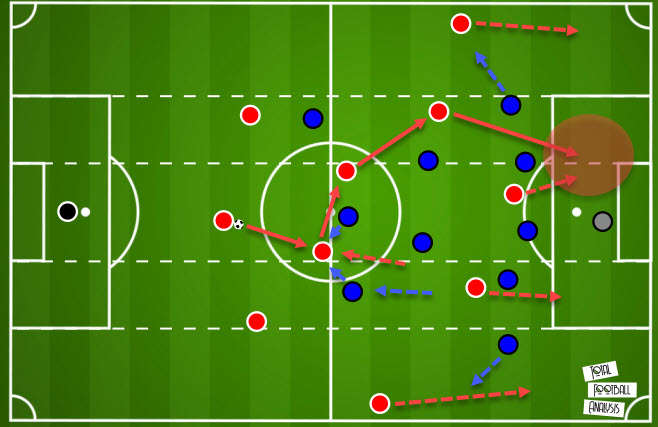 Bayern, on the other hand, mostly defended in a 5-3-2 system that would transform into a 5-2-3 in the initial phase of the press, and then into a 4-3-3 as the Germans pushed higher up the pitch. The main idea, however, for the home side was to find pockets of space between the lines where players like Félix and Correa operated.

As you can see from the graphic above, the pivots played a crucial role in this set-up. Creating space around them was essential for Atlético to successfully secure access to the final third and deploy passes into their most dangerous players.

Let’s explore a couple of different examples that all carry an underlying concept in their attacking tactics. Notice below such an instance. 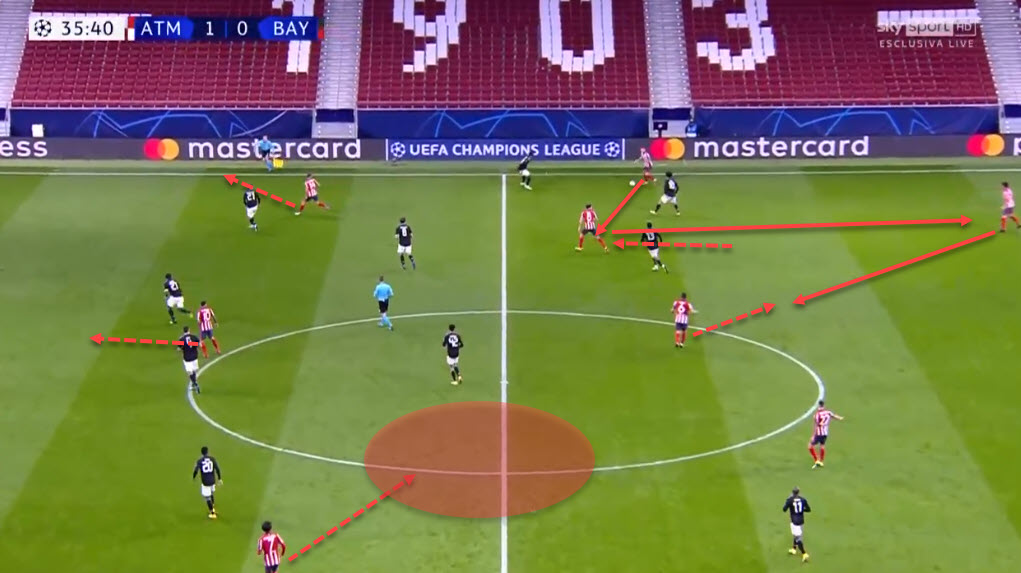 The key for the Rojiblancos is to move Bayern’s block until an opening can be found to advance the ball. Usually, they would recycle possession out wide where a couple of different moves would see them open a new channel. Firstly, the wide man – in this case, Llorente – would make a run into space behind, dragging his marker away.

This would in turn create a pocket of space for Saúl to receive the ball between the lines and instantly attract the attention of multiple Bayern defenders who would look to quickly collapse. However, Saúl would immediately play the ball back to Savić, from where it goes back inside to Koke and the Spaniard can turn and look to switch play towards Félix.

At first, this does seem like a very complicated pattern but it was one they constantly used throughout the game. Let’s explore one more below. 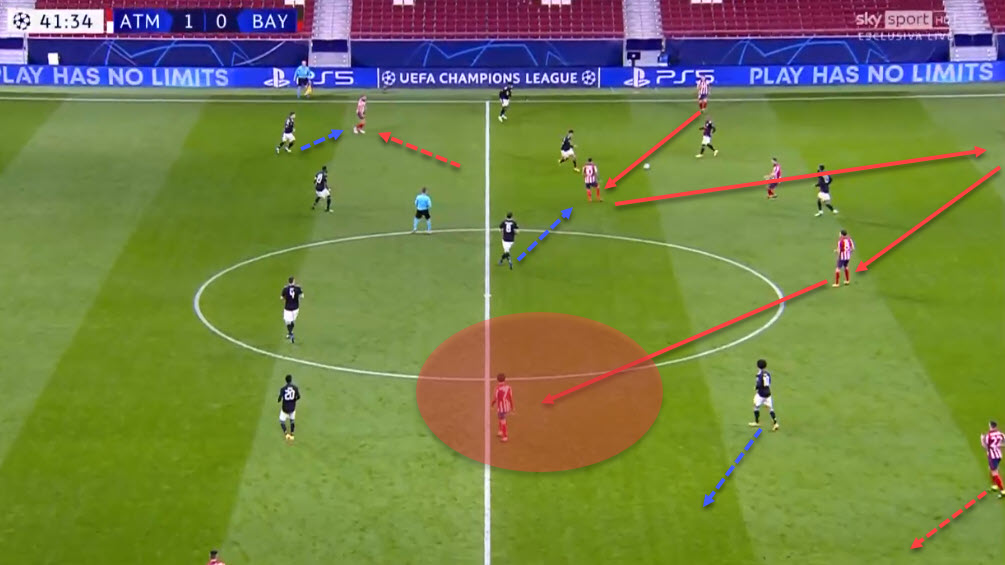 The goal is once again the same – get the ball to Félix. Llorente is wide, creating space for a player to position himself between the lines – this time it’s Correa – and the same sequence begins again. The ball goes in, out, and then back in towards a free midfielder around the centre of the pitch.

It seems Atlético used a player between the lines as bait so that they can create space for other teammates who can then recycle that possession and send the ball to an unmarked area of the pitch. If Bayern decided to press higher up the pitch in a 4-3-3 formation, Atlético would drop players deeper and then do the same thing once again.

We can see an example of that in the image below as first Llorente drops for a lay-off ball and then Correa does the same thing a moment later. 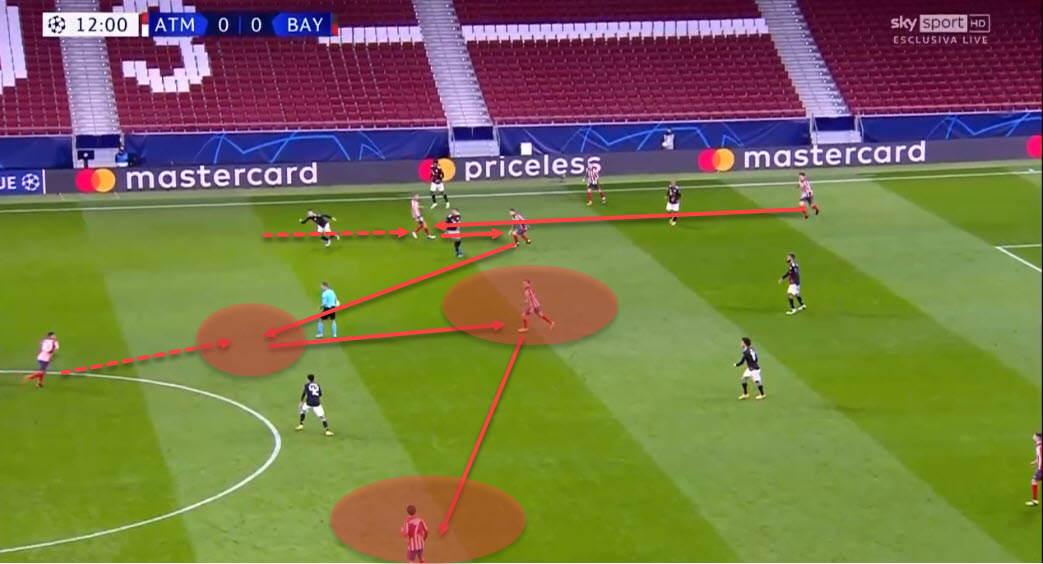 Of course, the sequence didn’t always follow this exact same blueprint but the main idea was always the same – swap sides from the congested area to the one where the opposition didn’t have enough cover.

At times, one of the pivots would also drop into the backline, allowing Hermoso to push slightly up. However, Trippier was always the more aggressive of the full-backs, and most attacking play went through him or Carrasco whenever Atlético Madrid were trying to go in-behind the opposition’s backline.

Even though it was a big clash on paper, Bayern essentially didn’t have anything to play for here but pride. Still, Flick opted for a younger squad that could hardly rival their hosts in the opening stages of the game. As the clash wore on, however, the Germans grew into it and deservedly scored the equaliser.

In possession, Bayern would set up in a 3-5-2 that turned into a 3-2-5 when entering the final third. The idea was that the three-man backline would offer them numerical superiority in the first line against Atlético Madrid’s 4-4-2 mid-block. 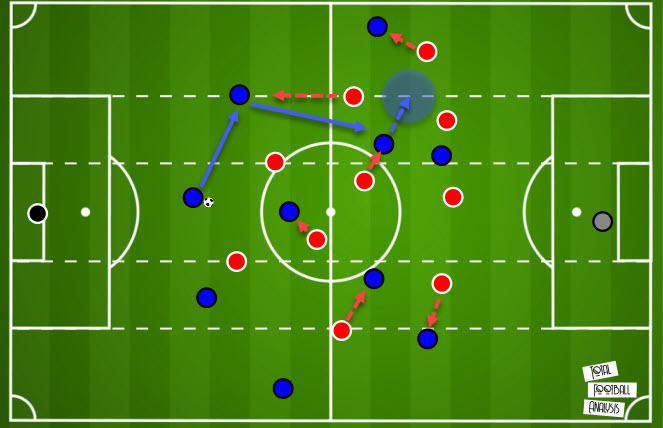 In such a defensive set-up, Simeone values both vertical and horizontal compactness, meaning he won’t have a problem turtling up and ensuring no central space is left uncovered. The forwards would press the backline while one of the central midfielders tightly marked the pivot. The other central midfielder would pick up players between the lines where Bayern were aiming to deploy their passes.

The wide midfielders had differing roles depending on the direction of the guests’ build-up. In the graphic above, you can see Bayern head to the left so it’s the right wide midfielder who steps up to press the ball-carrier while the left one picks up the interior on his side.

With the numerical superiority in the first line, the Germans had a clear plan of sending their centre-backs to carry the ball into advanced areas. You can see a similar situation in the example below. 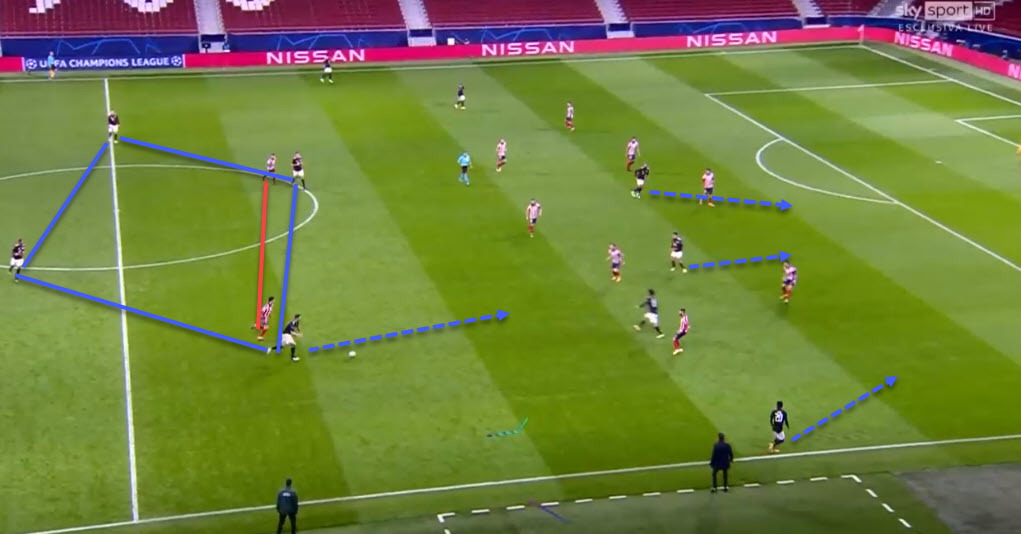 Bayern have a 4 v 2 situation in the first phase of build-up and can easily advance with the ball to the right or the left. Since all the Atlético Madrid players are occupied, no one can put immediate pressure on the ball-carrier.

Once the centre-back enters the final third, it triggers the runs from multiple sources should he decide to go for a pass in-behind the opposition’s backline. Of course, these were the instances when Atlético Madrid were not able to press aggressively, which they have done for the majority of the opening stages of the game.

In such scenarios, they would push their defensive line extremely high and at least one of the midfielders would join the forwards in pressing the opposition. Let’s observe that in the graphic below. 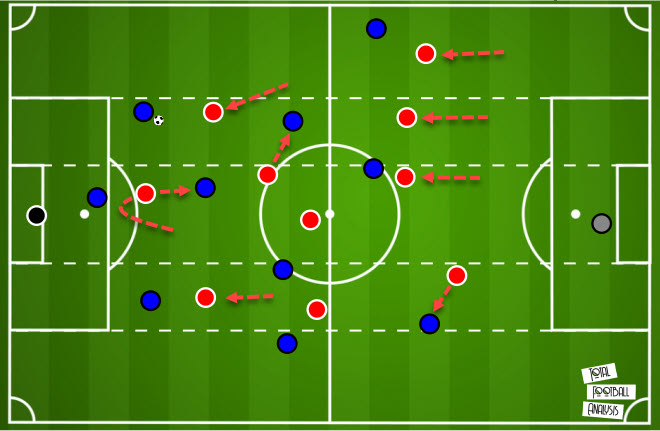 Here, one of the forwards would make a curving run and after putting pressure on the central defender, switch to the pivot. At the same time, the midfielder who was covering the pivot before that would move to the opposition’s midfielder.

At the same time, you can see how the backline pushes up as well, either setting an offside trap should a ball over the top be played, or simply getting into a position to intercept the ball. That’s exactly how Atlético Madrid created a couple of excellent chances throughout the game.

Below is such a scenario where they manage to recover the ball after forcing a risky pass and then counter effectively. 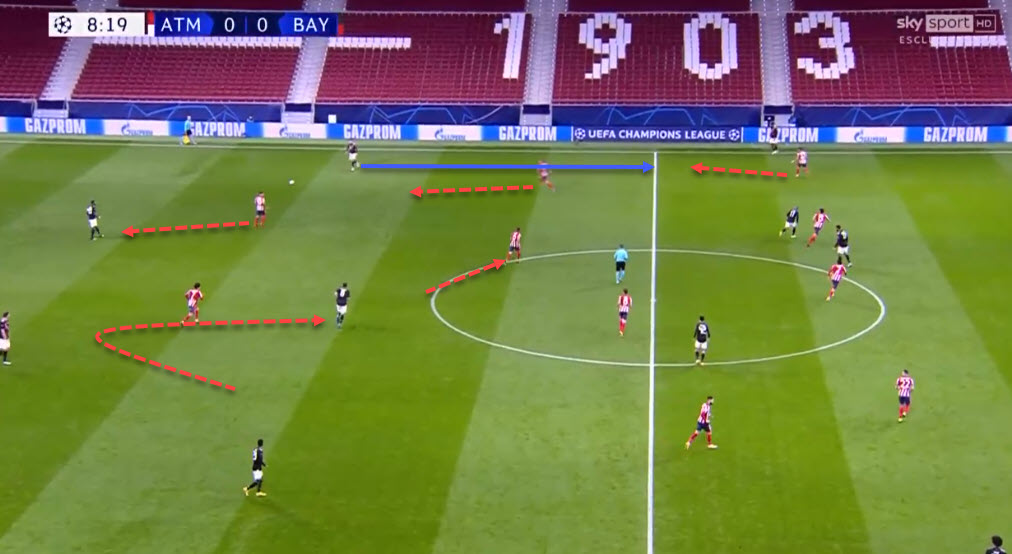 Notice that the set-up is almost identical to the graphic above even though it’s a completely different moment in the game. Félix makes a curved run, switching from the centre-back to the pivot while Koke moves away to cover the depth instead.

At the same time, the Rojiblancos are holding an extremely high line with Trippier ready to pounce on the ball. As soon as Llorente engages in the press aggressively, Bayern are forced into a quick reaction and the ball-carrier doesn’t have enough time to respond, sending a pass wide to the left, where it gets intercepted.

Unfortunately for the home side, they couldn’t sustain it for the full 90 minutes and in the latter stages of the game, Simeone ceded control to the visitors. At that point, we saw Atlético in a much deeper 5-3-2 block and Bayern were afforded more time on the ball to find gaps in the structure. 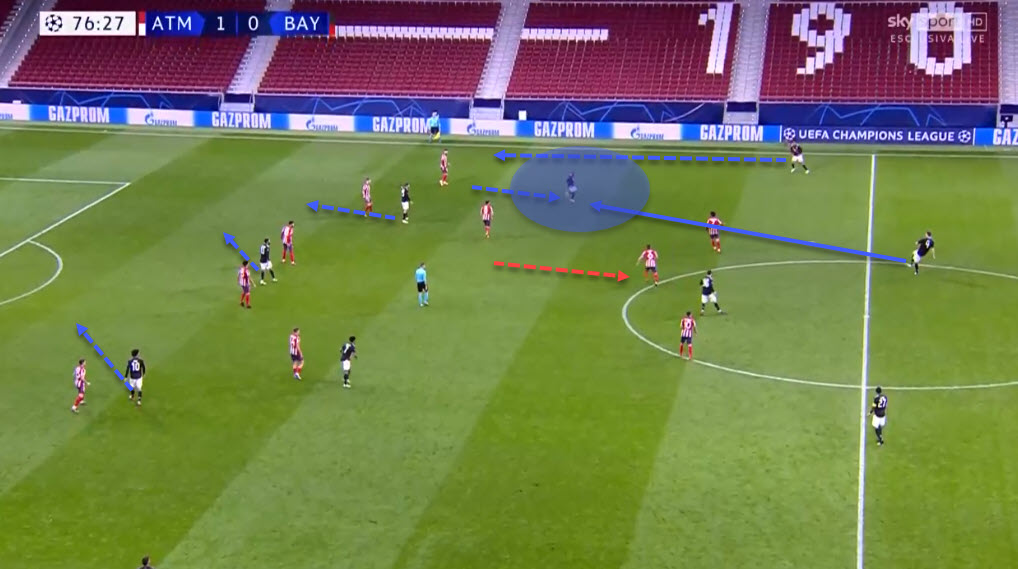 Above is an example of that. You can see the hosts in their 5-3-2 block and Bayern attempting to manipulate them to create space. They were getting into the box more often and eventually got a penalty for their troubles.

Atlético Madrid went on the aggressive after conceding, but couldn’t score the winner despite coming unbelievably close in the last seconds of the game.

A one-all draw is certainly a disappointing result for Atlético Madrid and proof that even a heavily rotated Bayern Munich squad is a worthy opponent for anyone. Simeone’s attacking tactics did shine for the majority of the game, but they simply weren’t clinical in front of goal.

Flick, on the other hand, had nothing to lose and can certainly be happy with both the performances of his youngsters and the end result.