In the final round of the group stage matches, Dutch champions Ajax took on an inspired Atalanta outfit for a place in the next stage of the UEFA Champions League. Sitting above Ajax by a point, Atalanta only needed a draw to ensure progression whilst the Dutch side needed to walk away with three points to move forward.

Needing to clinch a win, Ajax’s hand will be forced as they push numbers forward to try and put themselves in the driving seat early on. This presents the Serie A side with opportunities to capitalise on the lack of opposition numbers behind the ball and the subsequent spaces that emerge. Therefore, Ajax will need to be mindful of their defensive balance and reorganisation during transitional moments.

With this match set up as a must-watch game, this tactical analysis will break down the tactics used by both teams as they fight for progression into the next round. This analysis will also look at the key moments of the match and the way in which both team’s sought to capitalise on periods of momentum. 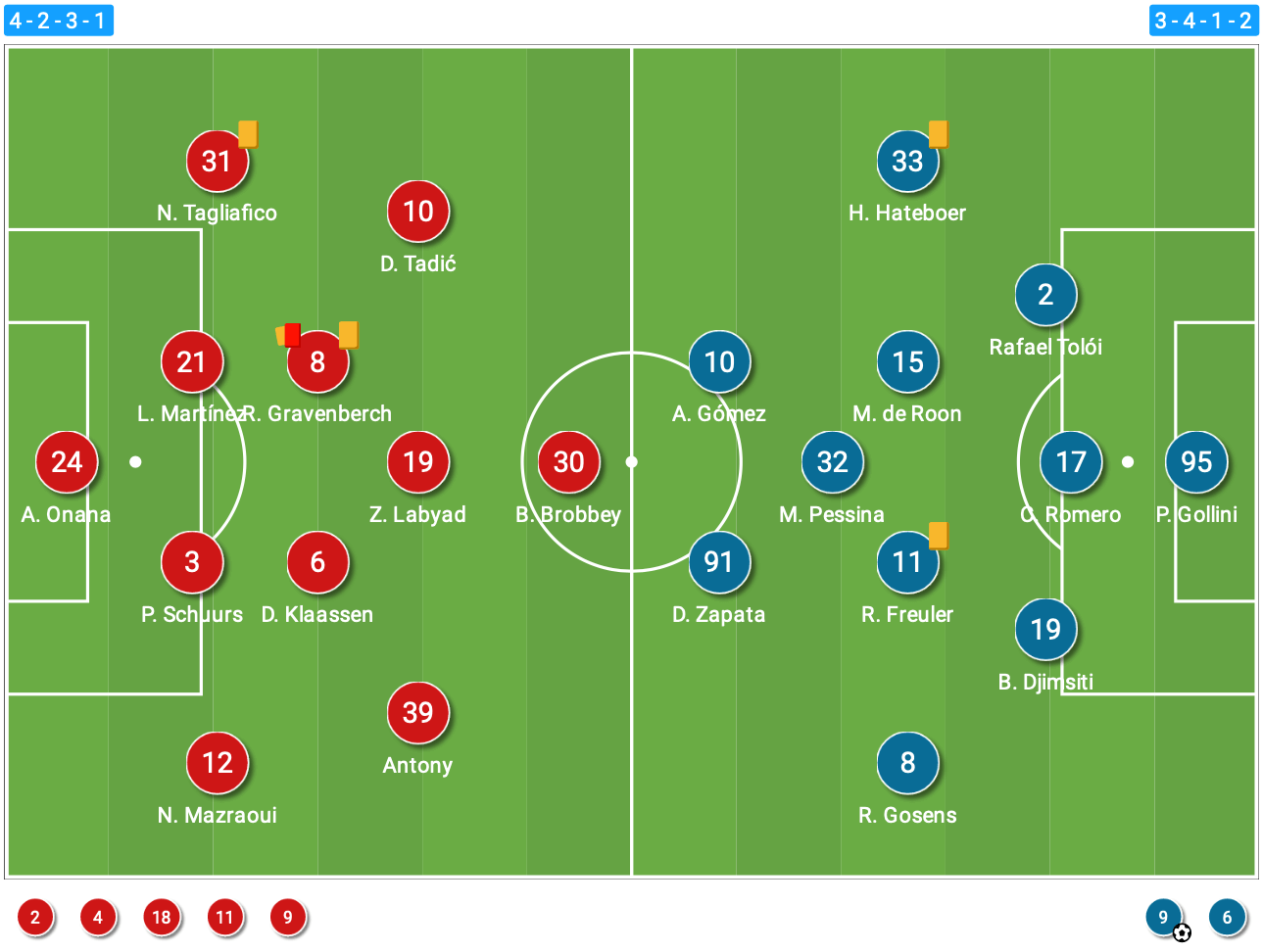 Erik ten Hag lined his men into a familiar 4-2-3-1 formation as they had used previously with Atalanta. Ajax’s first-choice goalkeeper, André Onana, started in goal. Protecting him was a back four of Nicolás Tagliafico , Perr Schuurs, Lisandro Martinez and Noussair Mazraoui. Davy Klaassen and Ryan Gravencerch positioned themselves as the two holding midfielders who aimed to provide service to the front men between lines. Dušan Tadić , Zakaria Labyad and Antony made the attacking line of three who supported striker, Brian Brobbey.

Also, with no surprises, Gian Piero Gasperini opted for his favoured 3-4-1-2 formation starting with Pierluigi Gollini in between the posts. In front of him was a three-man backline of Christian Romero, Rafael Tolói and Albanian centre-back Berat Djimsiti. Robin Gosens and Hans Hateboer provided the teams’ width in attack, whilst Remo Freuler, Marten de Roon, and Matteo Pessina held their central midfield positions. With no Josip Illičić, Argentine striker, Alejandro Gómez came in to partner with Duván Zapata up front.

Knowing the possession-based style of football that Ajax aim to implement, Atalanta opted not to press the centre-backs in possession. Instead, as the ball was circulating around the backline, they looked to maintain a higher block and wait for their trigger point to press. Naturally, because of the man to man marking in central areas, opportunities for Ajax to progress the ball fall into wide areas. Rather than tucking inside to provide forward passing options for Klaassen and Gravenberch, Tadić and Antony pushed out wide to support the fullbacks.

From the image above, both Zapata and Gómez are using their cover shadows to prevent Ajax’s holding midfielders from receiving the ball. If the Dutch champions manage to break the first line of defence, then two of the three central midfielders for Atalanta will be touch tight as they receive the ball.

To make sure that fullbacks, Tagliafico and Mazraou, are not in a position to have time and space on the ball, Hateboer and Gosens push forward and mark aggressively. On this occasion, Gosens has joined the backline and Freuler has pushed out wide. In an attempt to disconnect Atalanta’s backline, as the ball travels to the fullback around the half-way line, Antony drifts out wide so that he becomes a supporting option. As a bi-product of his movement and Romero’s positioning, a large space between Gosens and Djimsiti has opened up. This presents a good opportunity for Brobbey to explode into that space and receive the ball. Given his strength, Ajax attempted to get their striker in 1v1 situations where he could push off a defender and attack the space behind, or hold the ball up under pressure.

There were two ways in which Atalanta looked to fill that gap and keep their backline connected. The first was to have the far side wing-back drop and shift across early so that the rest of the backline could cover the space when the ball side centre-back went to engage. The second method was to have one of the central midfielders drop into that position.

The Italian outfit didn’t always just sit and wait for Ajax to circulate the ball. In order to disrupt their build-up, Atalanta had a number of pressing cues to trigger a change in defensive pace. As seen above, one example is the pass from centre-back to centre-back. In this situation, the back and forth passing between the pair has allowed Atalanta to slowly move higher and decrease the space between attacker and defender. As Atalanta creep higher, Gómez angles himself to cut off the passing lane to the fullback. Now Schuurs has only one pass to play. The moment Atalanta are set and the pass to Martinez is made, Zapata changes his pace and engages Matinez. Knowing he has to play first time, Matinez tries to find a high teammate but Atalanta have pushed man for man and intercepted the ball.

A second trigger would also be the ball being played into a wider a where the Ajax fullbacks have limited options. In order to entice Ajax to find a fullback, Gosens and Hateboer would drop off their markers allowing their opposition to perceive extra space surrounding the fullbacks. On the travel of the pass, Hateboer and Gosens get touch tight and win try to win back the ball.

With the majority of players positioned around the flanks of the field, Atalanta used their diamond support to progress upfield. Within this system, there is a reliance on verticality and making sure that players have at least three options when they are on the ball. As such, being the wider centre-backs, Djimsiti and Tolói form the base of the diamond and start the attack.

When the centre-backs are on the ball, Gomez and Zapata move wide to form the top of the diamond whilst players in the midfield line of four become either side of the diamond. The variation in this situation is when Pessina is the one to shift out wide so that Gomez can pull the strings in central areas along with Zapata being the highest player.

One of the problems that the Italian side encountered was that Ajax started to close down both sides of the diamond and get tight earlier. To add to this, on the right-hand side, Zapata would be too far away to support De Roon and Hateboer if they ended up receiving the ball. If Zapata was to receive the ball from the back line, it would be from a long ball in which he was often isolated. Therefore, to decrease the distance between the top and sides of the diamond, Gomez would drop deeper to support.

Here, with Gomez moving to the side of the diamond, De Roon can form the tip so that the structure remains connected. By having higher players drop deeper, it also bought forward Ajax’s midfielders and allowed Zapata to isolate himself in a 1v1 against a defender. This bought some success for Atalanta, especially from the counter as Zapata got to fend off his marker and attack the backline. He just needed more support from forward runners. By the time they arrived, momentum was lost, or Zapata had already taken a shot on goal.

As mentioned, part of the game plan for Atalanta was to allow Martinez and Schuurs to have the ball as they posed little threat compared to Klaassen and Gravenberch. Zapata and Gómez did a good job of preventing the holding midfielders from receiving the ball. Since they couldn’t find their pivots, they either tried to find the highest players or safely shift the ball wide. If a teammate from the backline was to find a high player, the receiver immediately had pressure on his back and was unable to turn. What made it harder was that the high receivers didn’t have supporting options underneath because the distance between them and the midfield line was too big. Especially since the midfielders were initially positioned to support the backline in the build-up phase.

To add to the frustrations of the Dutch outfit, whenever their most dangerous attacking players got on the ball in wide areas, they were not able to face forward and attack the backline. Throughout the season, both Tadić and Antony start in wider positions and once they receive the ball, they cut in and drive in towards the centre of the opposition box. The aim of the run would be to drag a defender out of position and slip a forward runner in behind. But because of the angle in which Gosens and Hateboer pressed, Antony and Tadić were unable to cut inside. We saw a glimpse of how dangerous this run can be in the late stages of the first half, but Ajax were unable sustain any real attacking periods of play. As a result, Atalanta were comfortable remaining compact and shifting as the ball moved wide.

Because of his head injury in the first half, Brobbey came off and was replaced by Quincy Promes who joined the front line. With Promes positioned on the left flank, Tadić moved into the central striker role.

Ajax started the second half with renewed energy as the pressed higher and placed more pressure on Atalanta building up. The noticeable difference was the added support that the wide players were receiving when they were able to face forward.

With Antony on the ball, he now has three options. The overlapping run of Mazraoui, the inside ball to Klaassen or the killer pass to Tadić. Compare this to the first half where the wide players struggled to face forward. Pushing Klaassen forward also gives the attack more creativity as he can link play and slot through a variety of passes.

Needing a goal, Ten Haag bought on Jurgen Ekkelenkamp and Klaas-Jan Huntelaar in an attempt to use their speed to get past their immediate markers in 1v1 situations. Having fresh legs also gave Ajax more attacking options on the counterattack. However, the quick defensive reorganisation of Alatalata allowed them to slow Ajax down on the counter and enabled them to get teammates behind the ball.

The last 20 minutes were quite frantic for Ajax as they needed to get the ball forward and create opportunities to score. Loss of patience due to time pressure, we saw more long balls into the front line with Tadić and Huntelaar as the aerial targets.

If they were to create an opportunity from a longer ball, Ajax needed to make sure that the target player had support. In the situation above, if Huntelaar was able to flick the ball on, Ekkelenkamp would be the runner breaking through. At the same time, there needed to be supporting options underneath to win the second ball as well. Klaassen was that man in this situation.

With Ajax pushing forward and trying to get players in and around the opposition box, they still needed to be wary of the counterattack. In the end this is what gave Ajax the killer blow and allowed Atalanta to score in the dying minutes.

As Atalanta scored in the 84th minute off a counterattack, Ajax had nothing left in the tank, especially playing a man down. With Gasperini’s men clinching the win, they progress onto the next round of the UEFA Champions League along with Liverpool who drew with Midtjylland 1-1. 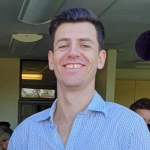 FFA Licenced Football Coach and Analyst based in Australia