On Wednesday night Paris Saint-Germain will be looking to take a step towards securing their second Champions League final in a row, as they take on Manchester City at the Parc Des Princes. City themselves will be looking to build on their Carabao Cup final win on Sunday and take a strong result back to Manchester for the second leg, in their quest for their first Champions League final appearance.

This tactical analysis will look to give an insight into some of the tactics both managers, Pep Guardiola and Mauricio Pochettino, respectively, could look to use in this Champions League semi-final first leg.

The noticeable absentees in Man City’s Carabao Cup final starting XI were Ederson, John Stones, Rodri, and Bernardo Silva, whilst Oleksandr Zinchenko and Gabriel Jesus were also out of the starting line-up.

Whilst it’s difficult to tell whether the two latter players will make the starting XI, it’s more likely that the former four do. It will be a toss-up between Zinchenko and Cancelo, but as Guardiola might look for more control in the centre of the pitch, he may opt for Cancelo. It wouldn’t be a surprise to see Guardiola go with a false 9, and frankly it could be any of Bernardo Silva, De Bruyne, Foden or even Gundogan in this role, or potentially a number of these players could fill this role at any point during the game.

As for PSG, Keylor Navas, Marco Verratti and Marquinhos have all been back in training the past week and are therefore likely to play. Verratti played in attacking midfield in this weekend’s 3-1 win over Metz but after Neymars’s outstanding displays in the 10 position in the games against Bayern Munich, it would be a surprise to not see the Brazilian play there again. 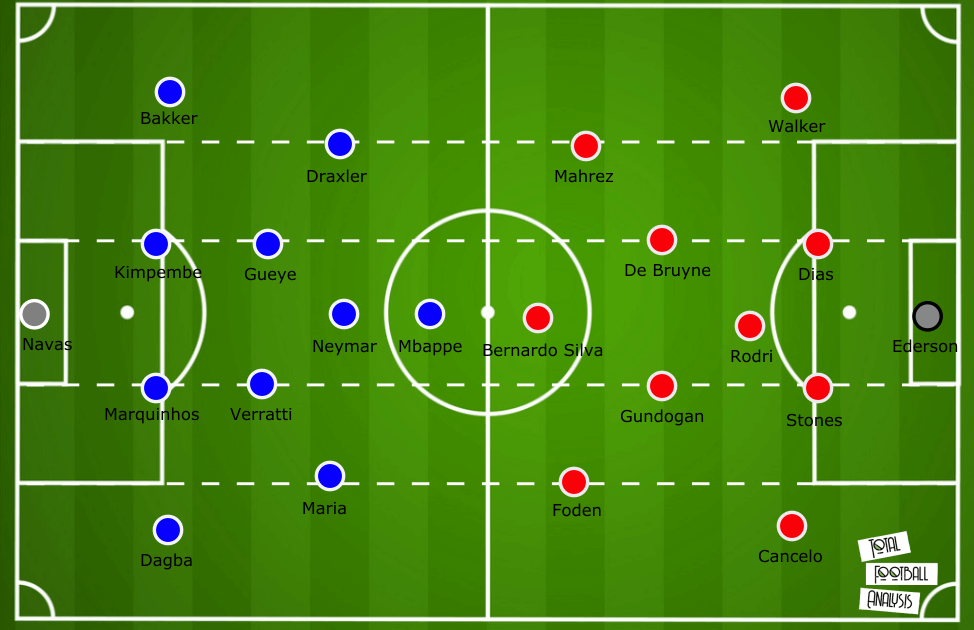 Whilst PSG will certainly look to impose themselves on the game, they will know that with the pace of their attackers, they have a terrific chance of catching possession-heavy Manchester City on the counter-attack.

Neymar was a consistent threat in both legs against Bayern Munich in this role.

Out of possession, PSG will look to get players behind the ball and will leave Mbappe up by himself. The forward is enough of a threat to remain high by himself due to his pace, and this gives PSG the freedom to pack numbers behind the ball without losing the counter-attacking threat.

Neymar bridges the gap between Mbappe and the rest of the team, giving them a 4-4-1-1 shape, as we can see in the image below. 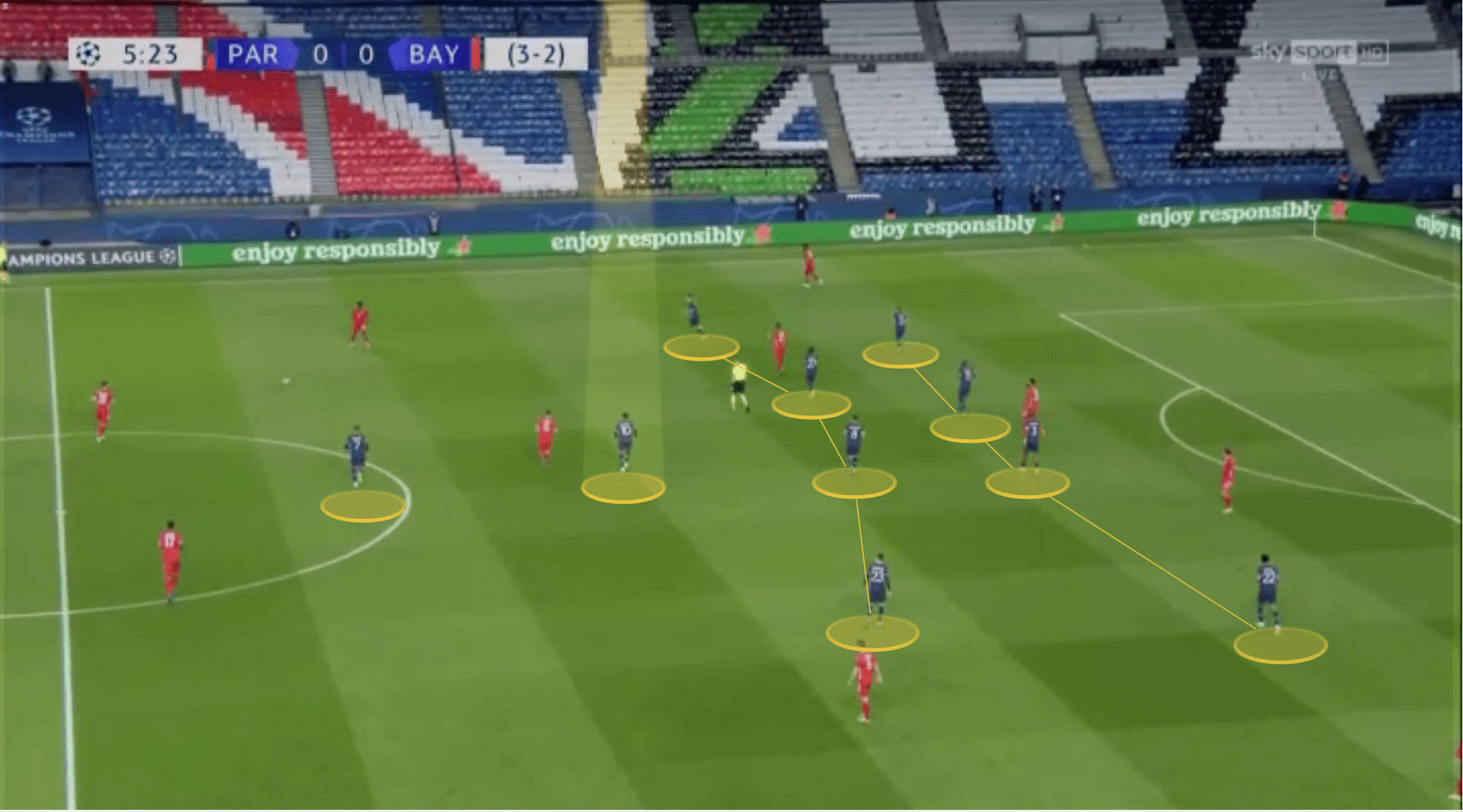 From this position, Neymar is the first passing option upon gaining possession, whilst he can also perform a defensive duty in picking up the opposition pivot. As the ball is advanced closer towards PSG’s goal, the Brazilian generally lingers around the edge of the box, and whilst he is still keeping an eye on the pivot, he will look to drift into pockets of space where he can be found as soon as the ball is won back by PSG’s defenders. 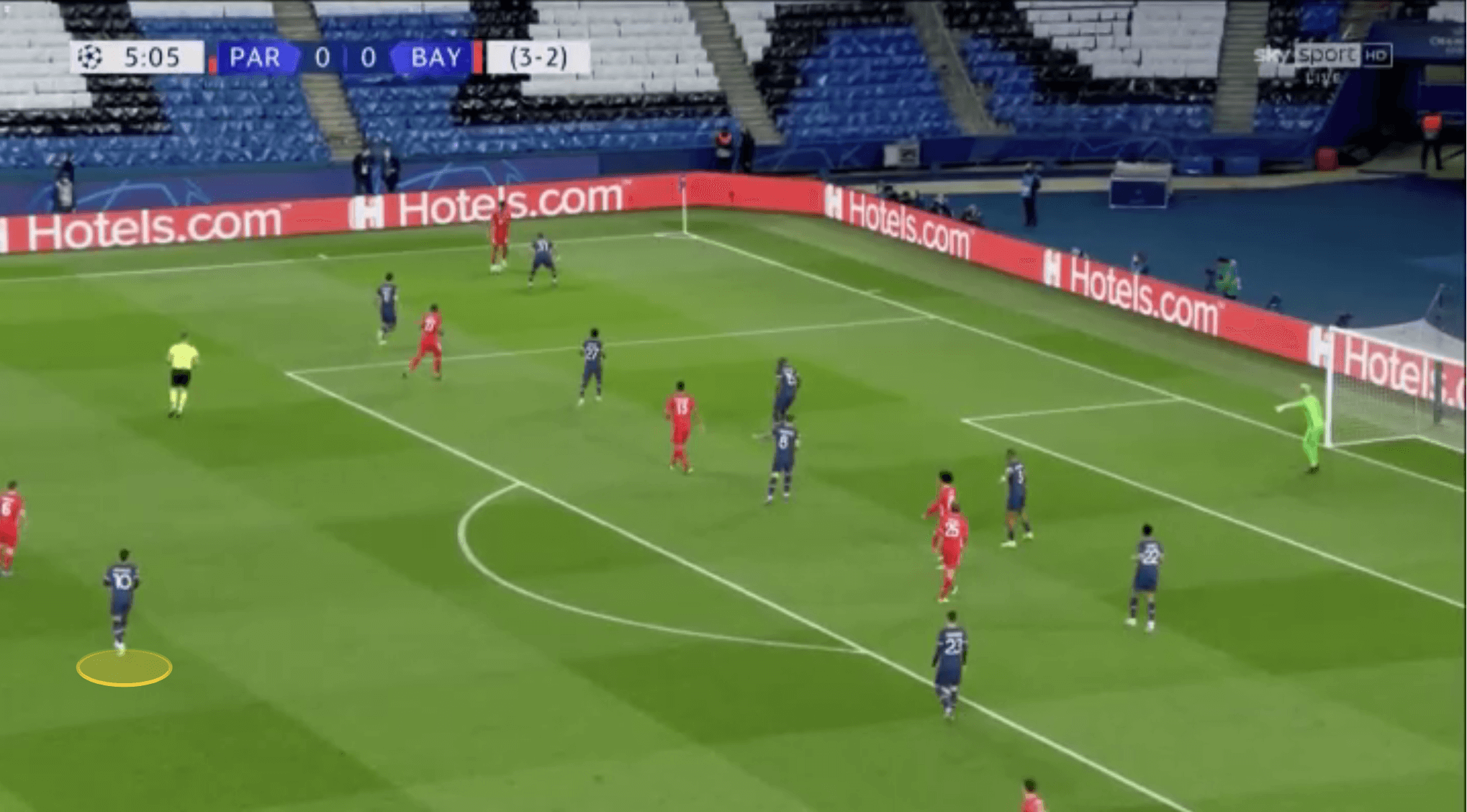 This can be in central areas, or he may drift into wider areas. Regardless of where it is, he does so with the aim of quickly receiving the ball, whereupon he can turn and drive forward. He then begins the counter, and gives time for Mbappe to find space ahead of him, as well as give time for the likes of Draxler and Di Maria, to push forward themselves. 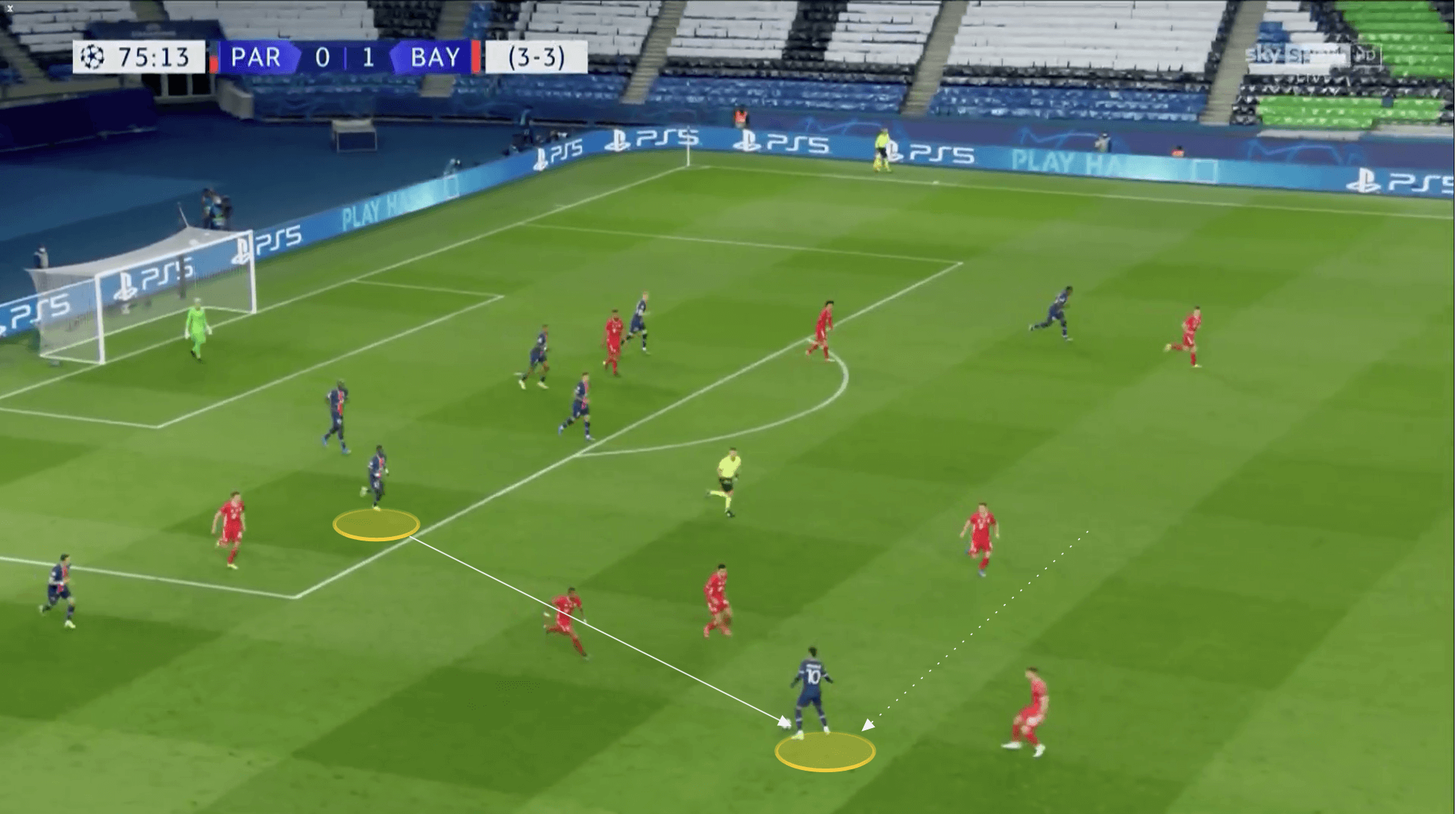 Neymar isn’t just a ball-carrier on counter-attacks though, and is particularly effective if he can ghost forward on these attacks and link play by finding space between the lines. PSG’s line-up will be littered with quick, confident ball progressors who can drive forward on the counter themselves. If Neymar isn’t immediately found, look for him drifting into the ten space to link these counter-attacks, often with Mbappe moving wide himself. In doing so, PSG can create preferable angles to provide through passes behind a high defensive line that’s in transition. 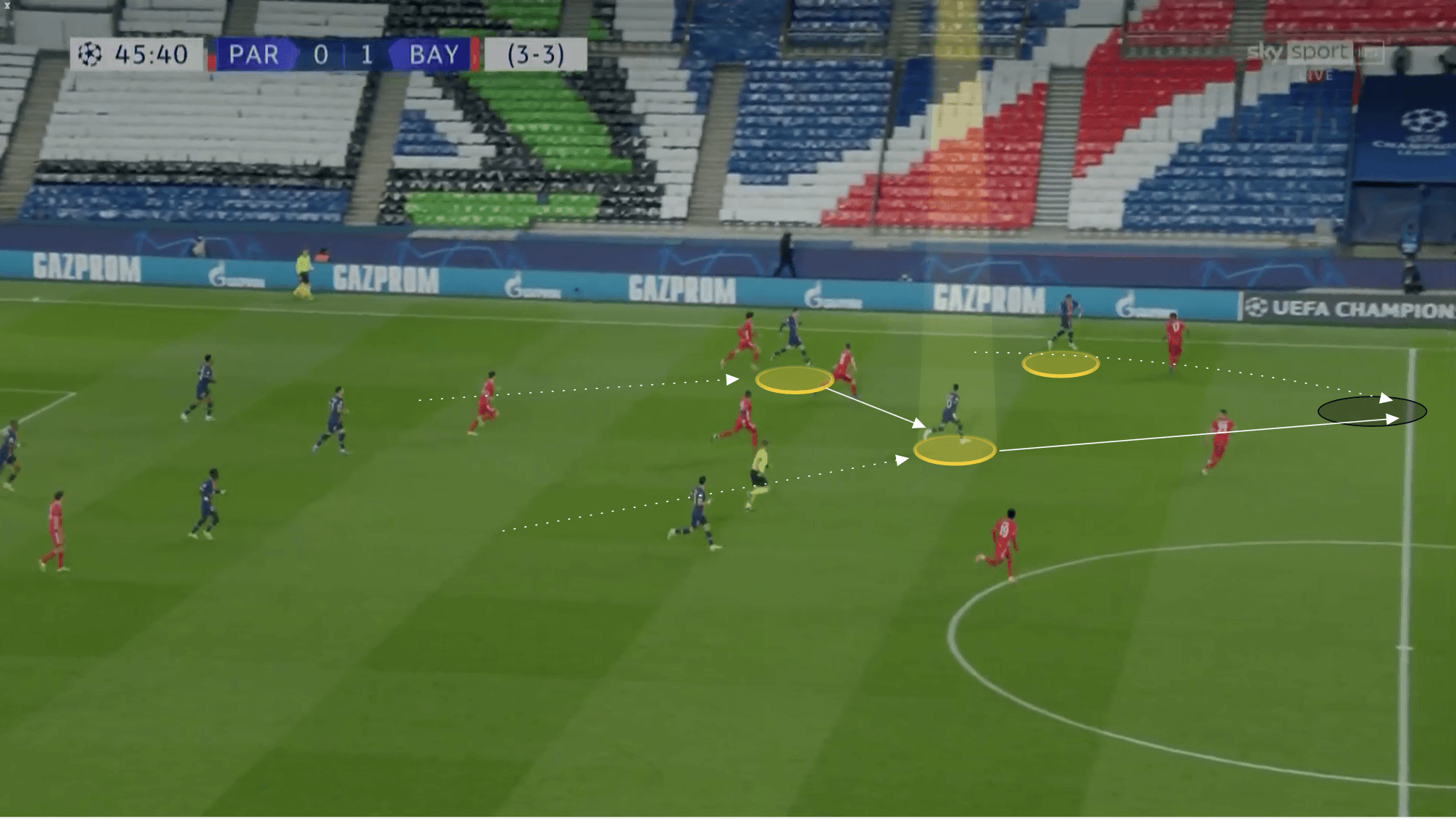 How PSG will look to find Mbappe

Mbappe uses the full width of the pitch as an attacker, and he will look to hurt City by attacking players in 1v1 situations, or by creating angles for pass in behind which he can beat the defenders to.

When he drifts into wider spaces, he does so in order to create an angle where a teammate can find him with a flat pass. Mbappe will then curve his run in behind from the wing into the centre of the pitch, which is shown as one of the options in the analysis below. 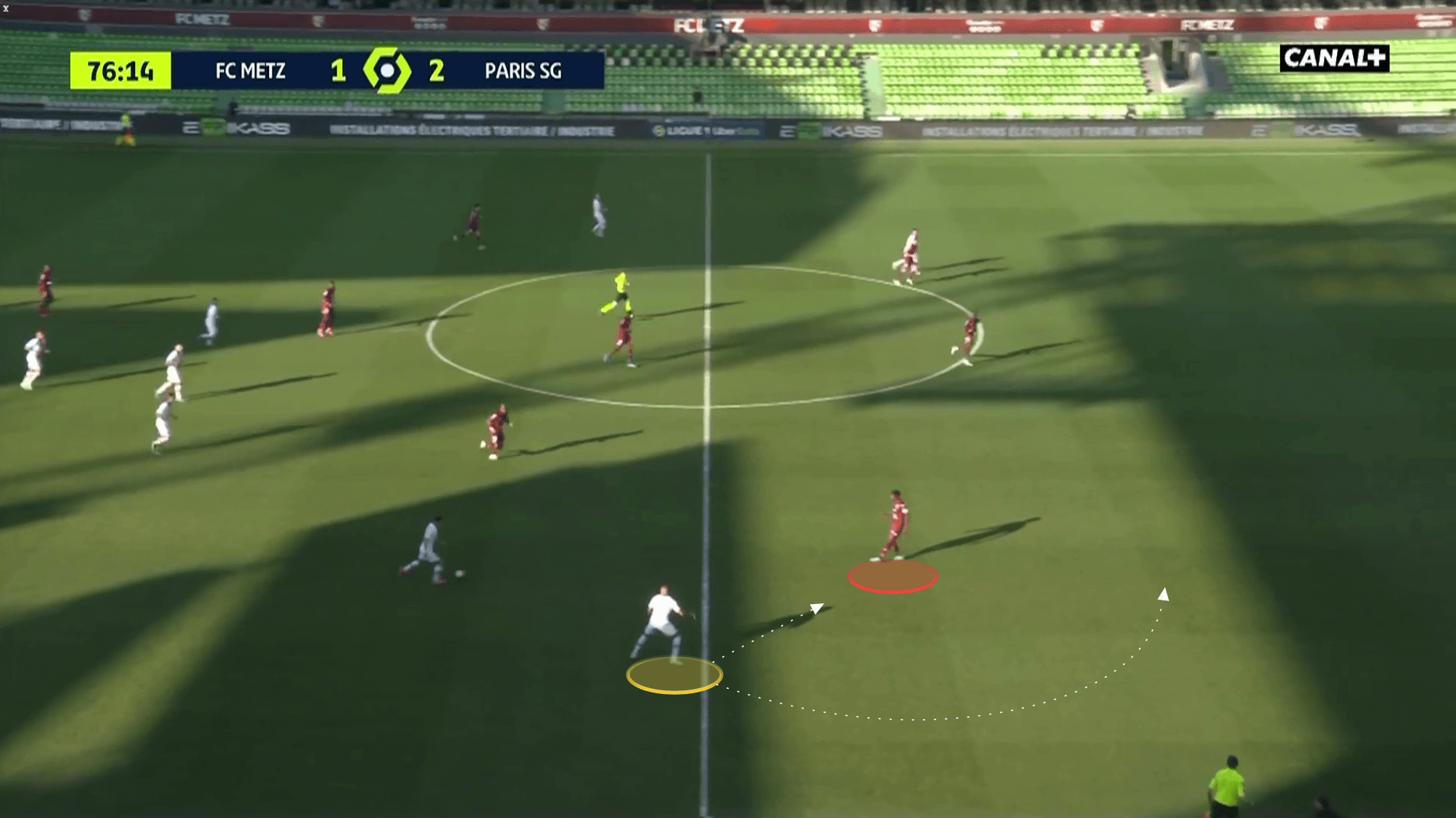 The other mode of attack he will use in these areas, is to take advantage of the space afforded to him on the wing to isolate the defender, and drive at them with the ball himself. Mbappe’s change of pace is difficult for defenders to deal with, and he will often look for the simple big touch in behind before rounding the defender.

When he does this, it’s likely he will drift to PSG’s right side, to avoid Kyle Walker, who might be one of a few defenders in world football who could potentially match Mbappe over a short distance.

Mbappe will also look to hit these areas on the counter-attack. The most dangerous ball for PSG to play in behind the opposition defence in these instances is the straight ball into the central channel. If he takes a central position to begin with he runs the risk of congesting the passing line, however, by taking a wider position, he can direct his run inwards, and be already facing the direction the ball is heading. Again if central, he potentially might have to adjust his position to face the other way depending on the route of the pass. Starting wide gives him a much better initial position to hit the space in behind quicker. 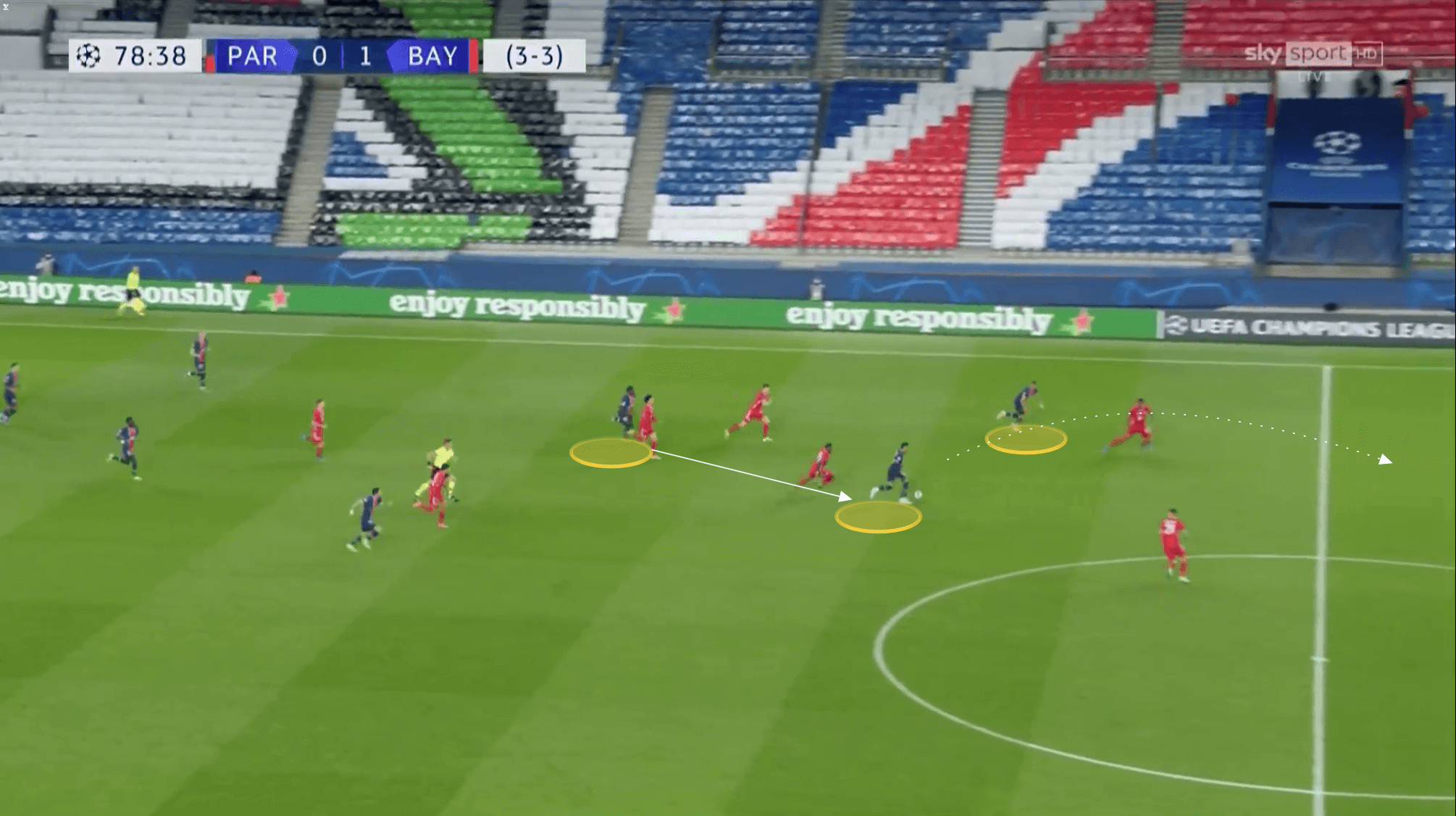 When the ball is in a central position on the counter-attack. Mbappe will most often go wide, but if it is already wide, he may opt to stay central. This presents a slightly more difficult pass in behind. If it’s under-hit it can be cut out, or if over-hit, the keeper can sweep it up easily. But, as we can see in the image below, Mbappe will look to take a position between the two centre-backs, and time his run to meet a whipped through pass into the space directly between the centre-backs. 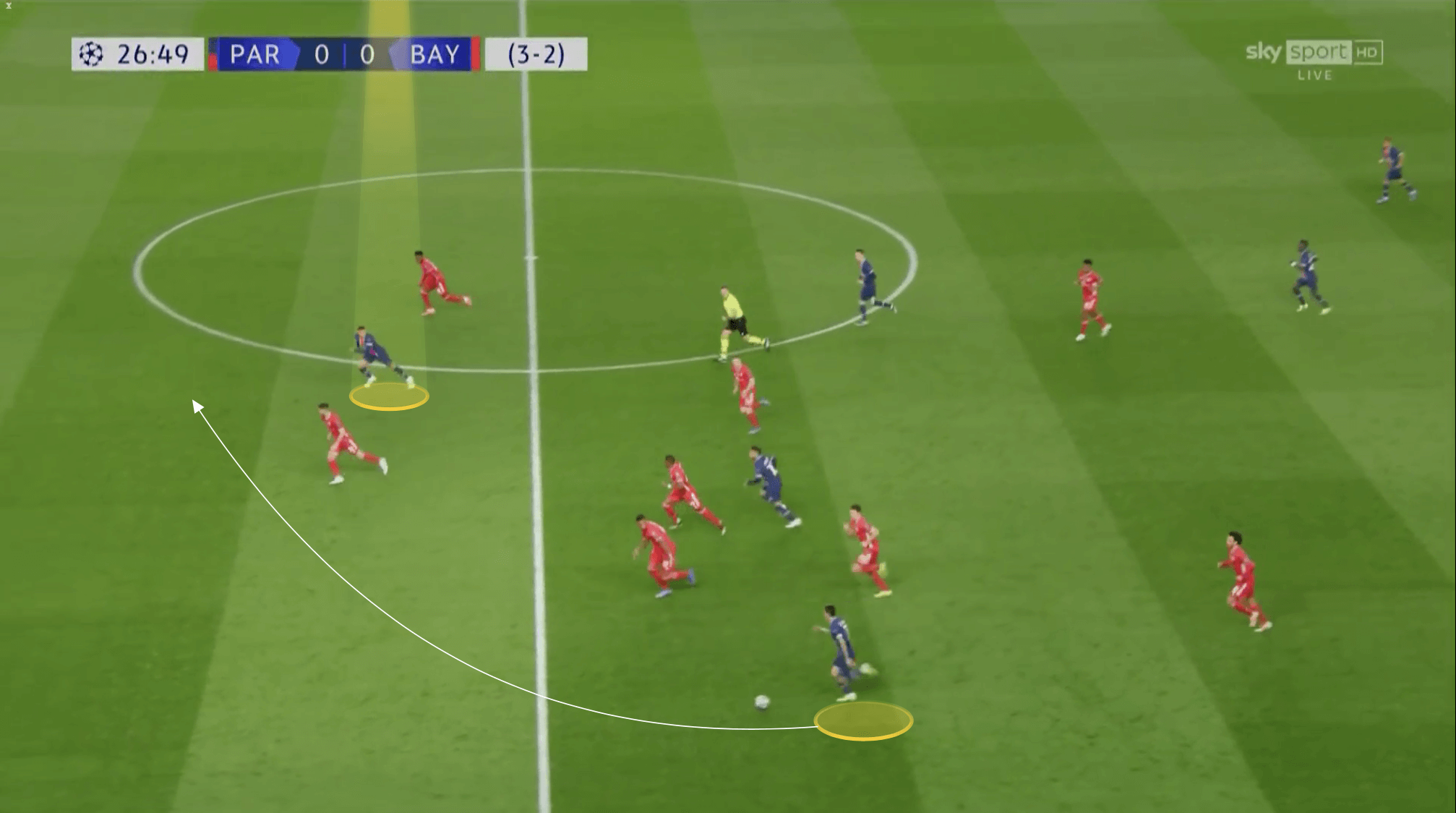 City’s attacking variables as they stretch the pitch

City will look to avoid PSG’s influential double pivot from having a significant say in the pattern of the game, so it’s likely we will see them seek to stretch the pitch horizontally. City will have at least one option on either wing at all times. However, their 8’s will often start wide as well. We can see how one of their 8’s is a wide position on the right flank, along with a winger in the image below. 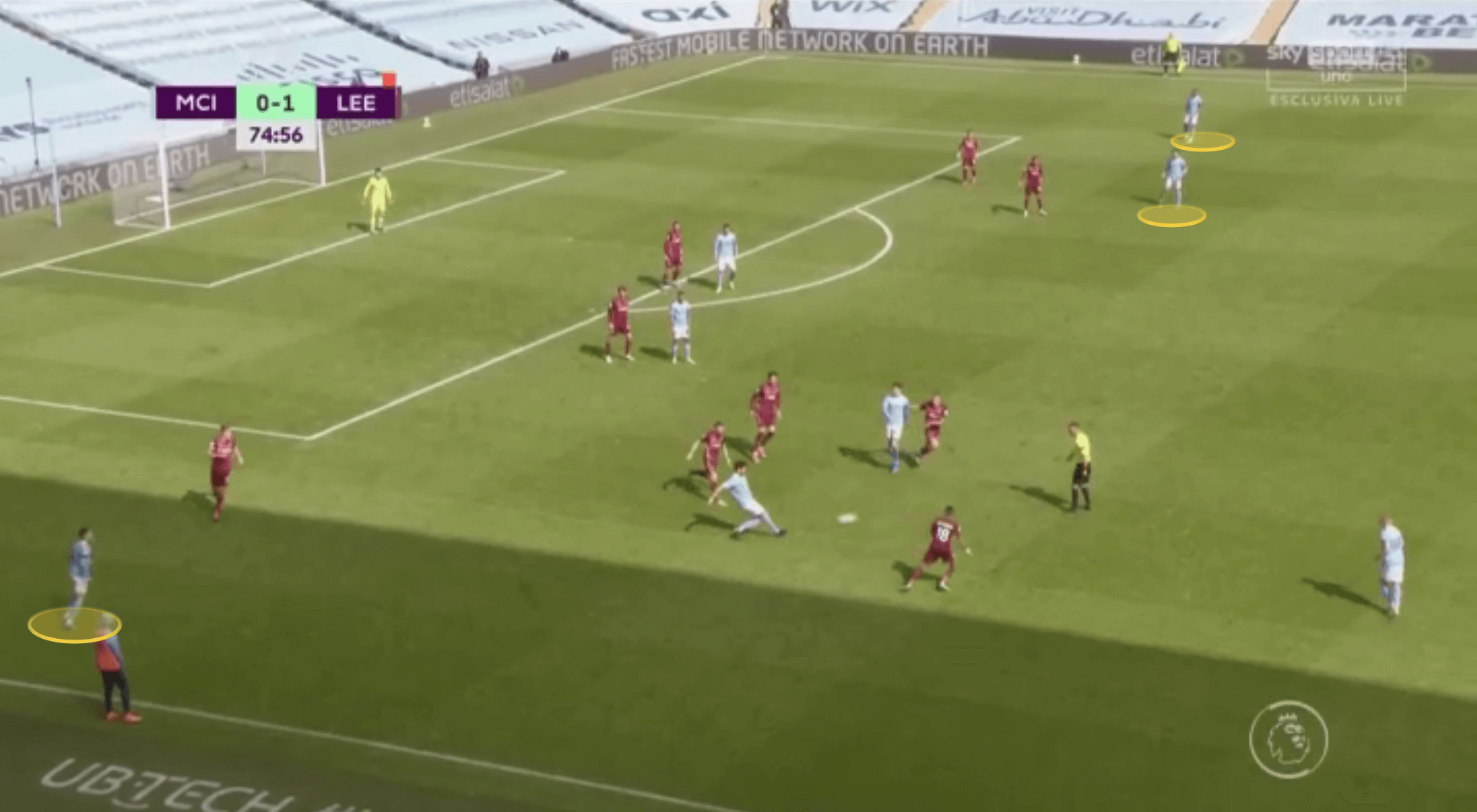 City will switch the ball from flank to flank. When they do this they will naturally stretch the PSG defence across the width of the pitch, and as a result they will begin to create bigger gaps in the back line, where through passes can be played through. Look for them to break the pattern of circling possession, with one of the 8’s making a run in behind. 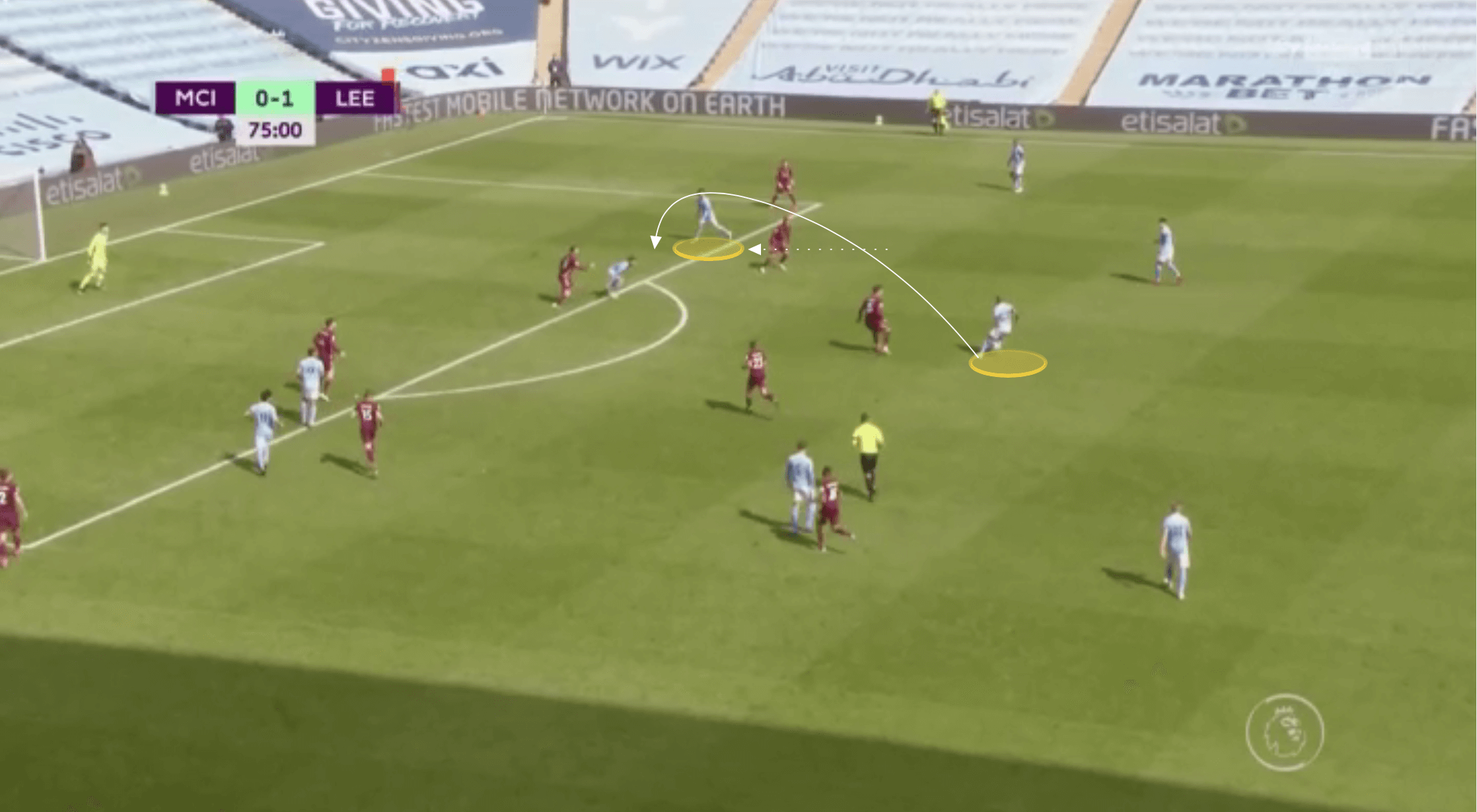 However, as the ball is circulated, these 8’s will also be in a prime position to create an overload along with a wide player, by positioning themselves in the half-space, again away from the centre of the pitch. 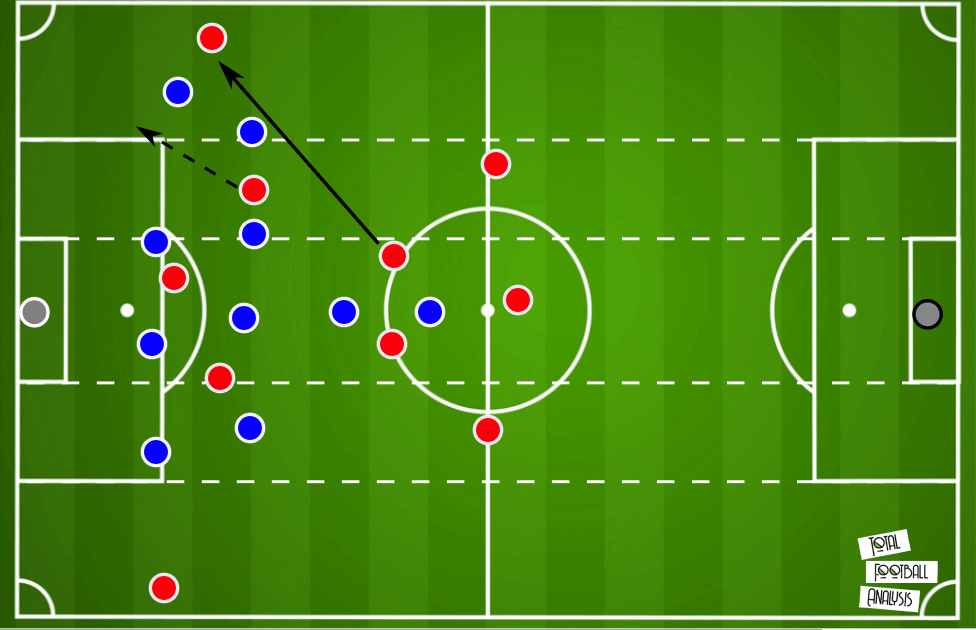 Once more, there are variations to this. De Bruyne will no doubt drift into the half-space, and whilst he’ll make runs like the one shown in below, he will also move in the opposite direction and react to the wide pass by dropping into a deeper area. 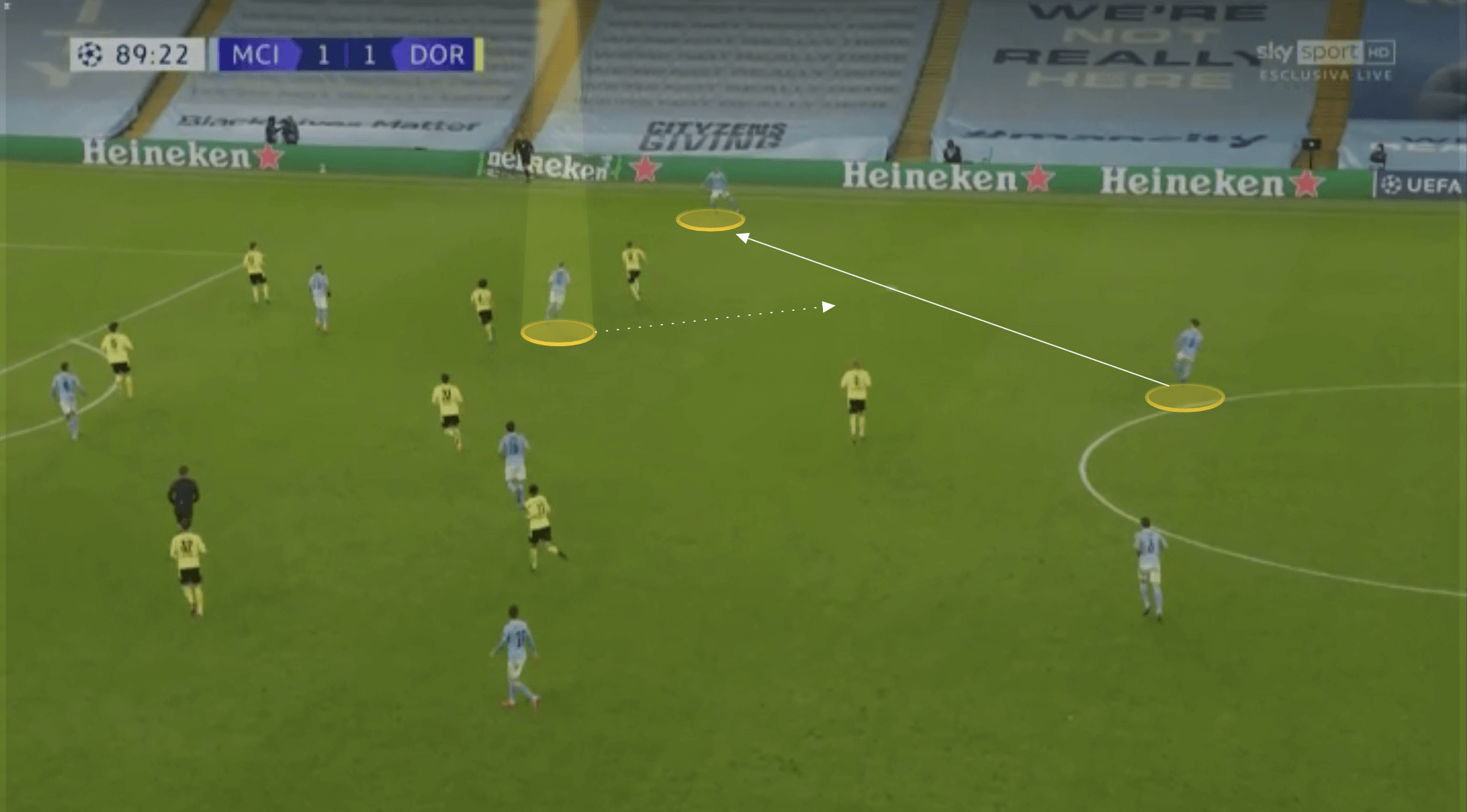 It is from these areas where the Belgian will hit his trademark whipped crosses into the box, which can be so devastating. It was from this exact pattern and pass from De Bruyne which led to Manchester City snatching a late winner against Dortmund in the home leg of their quarter final against the German side. 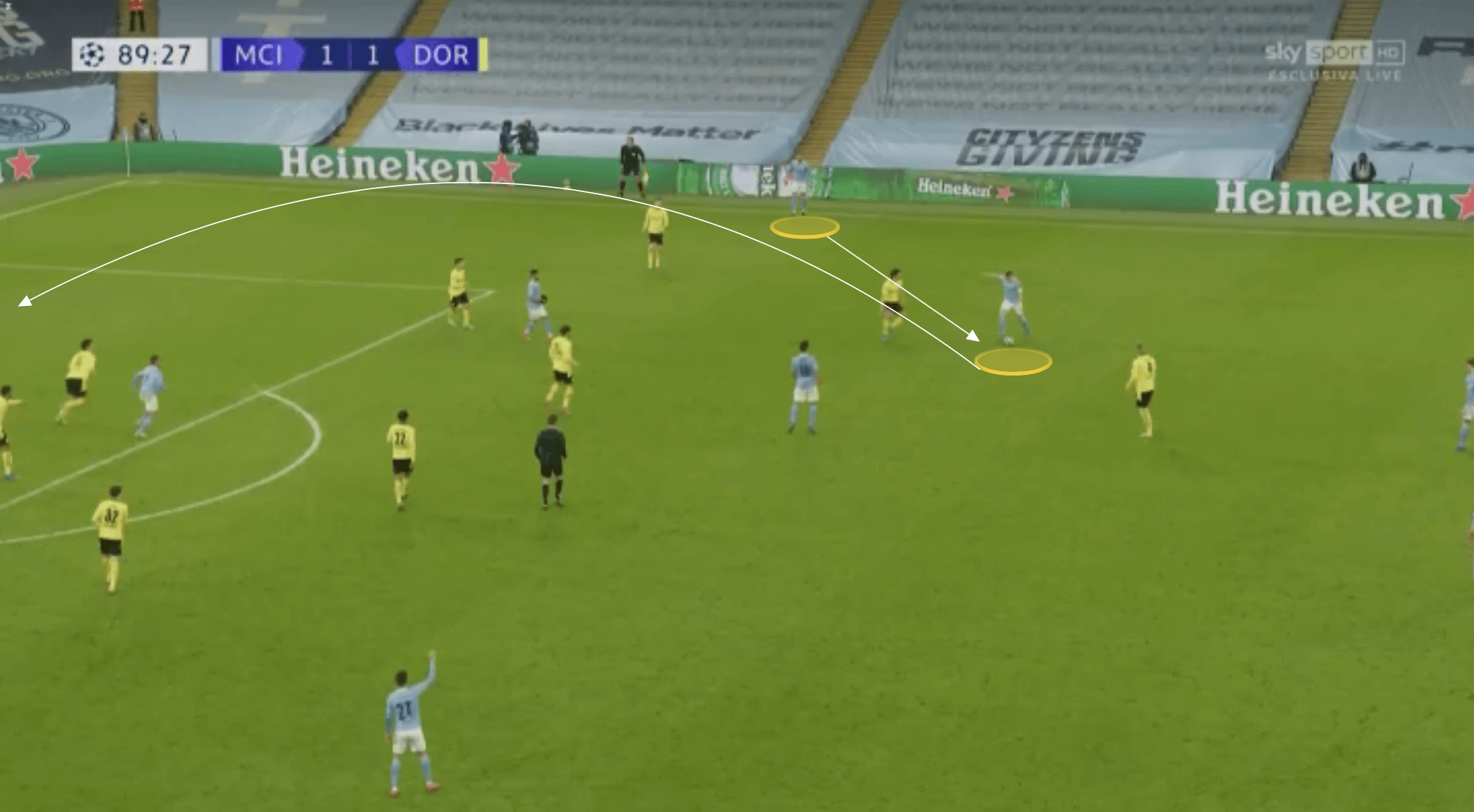 Finally, the width City will play with, and these cross-field balls to the players on each flank, will give the option for them to hurt PSG with direct passes in behind. 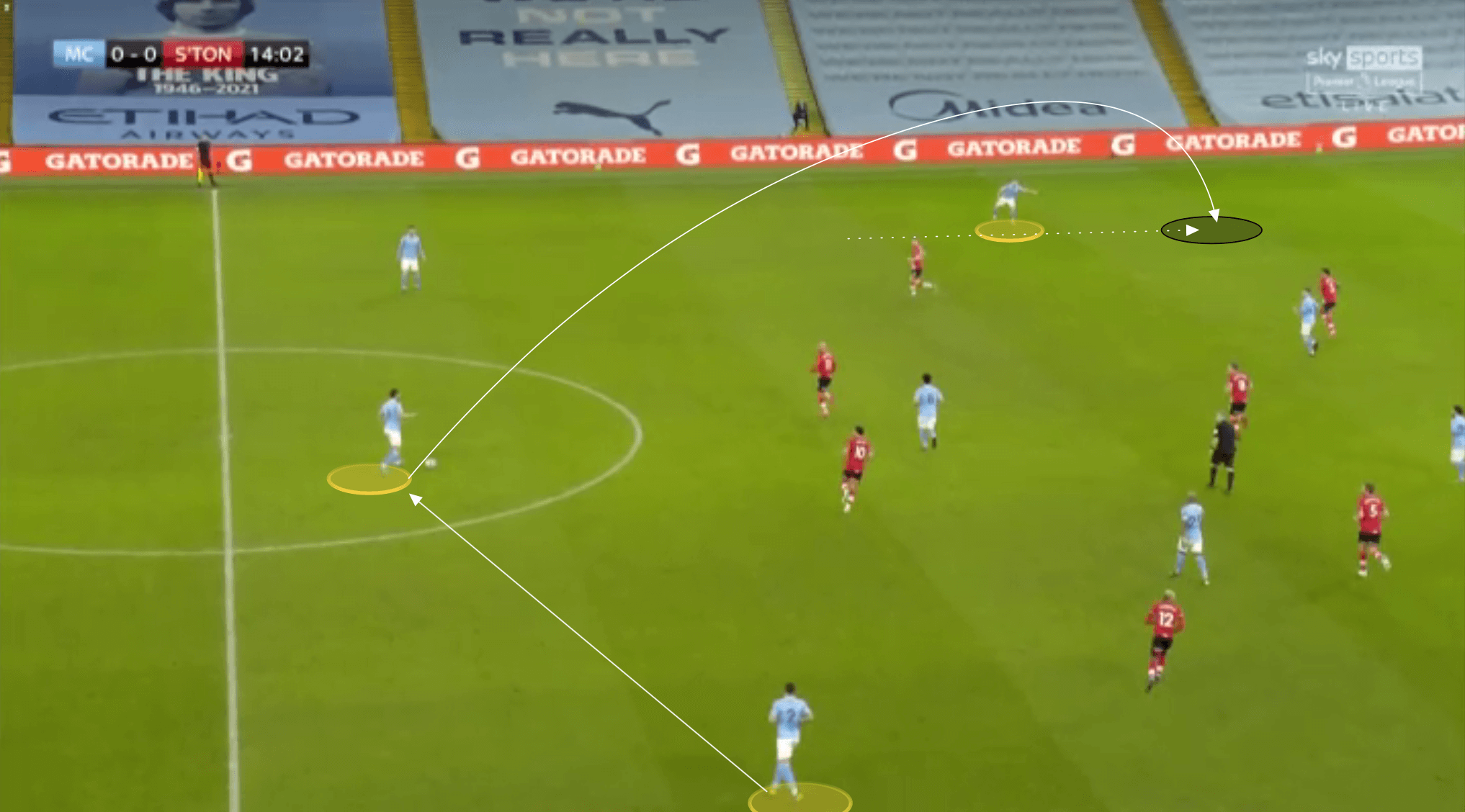 These four attacking opportunities will all present themselves at different times in this game, and show ways to get in behind a side who utilise a strong double pivot who will look to prevent any central passage.

As the game progresses, City will test the discipline of PSG’s defensive unit. If they consistently threaten from the flanks PSG may begin to commit more numbers to defending these wide areas, or at the very least leave spaces in the central channel.

City can also create these opportunities themselves, and look for a high, but slightly narrower position from Walker in the half-space, with a winger outside him to facilitate this pattern.

As the ball is circulated, Walker will react to the switch of possession by dropping out further wide to the touch line. 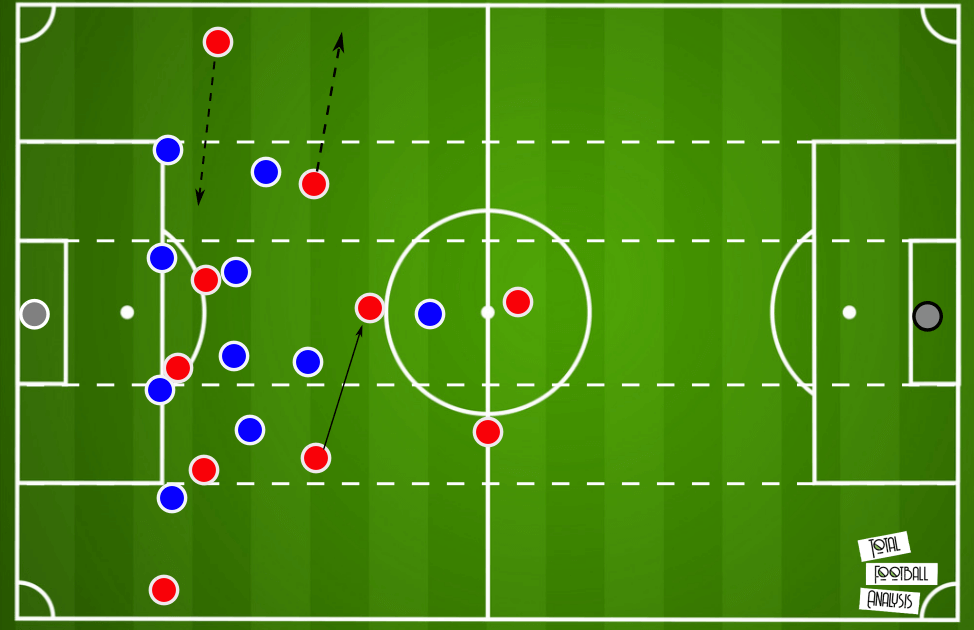 This move will be reciprocated by the wide player, potentially one of Foden, Mahrez or Sterling, moving inside, and finding space inside in front of the PSG back four. This in turn presents potential passing opportunities depending on whether this player is marked or pressed. 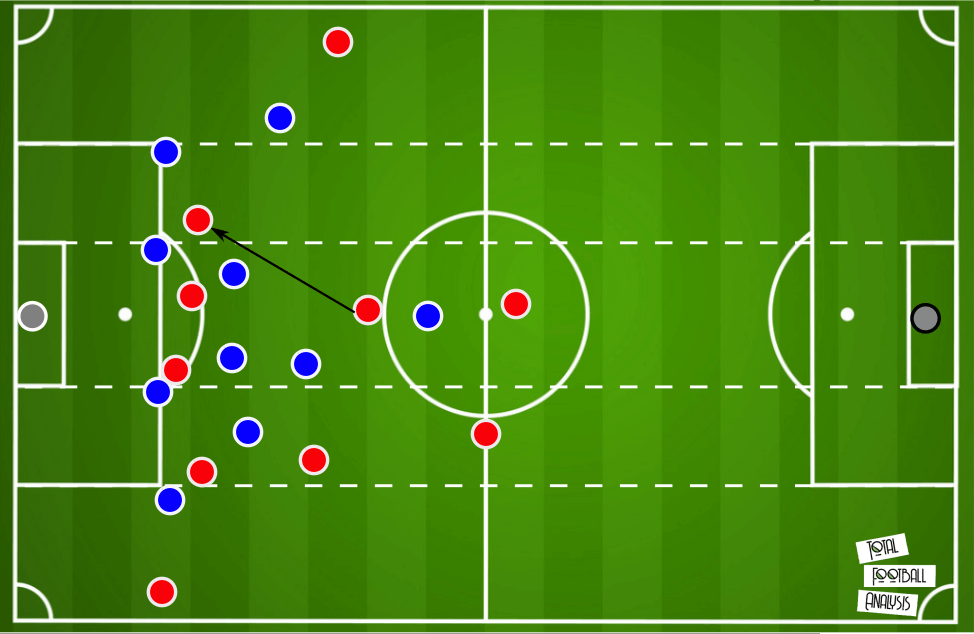 It will undoubtedly be a fascinating tactical matchup between two of European football’s giants, and with City playing in a Cup final on three days before this fixture, there is the potential there might be tired bodies and minds in their camp before this game. PSG will certainly fancy their chances of catching the visitors on the break with the counter-attacking threat they possess, whilst City will look to control the flow of the game, and potentially turn PSG’ tactics onto the hosts themselves should they notch an early away goal.

It will be particularly interesting to see how City line-up with one of Guardiola’s most prominent criticisms in recent years being that he potentially over thinks these big games and some have claimed the master tactician has got it wrong on these occasions before. 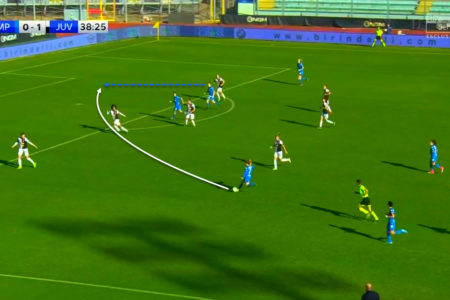 Cecilia Prugna is an international Italian player who is born on November 7, 1997 and she has been playing at […] 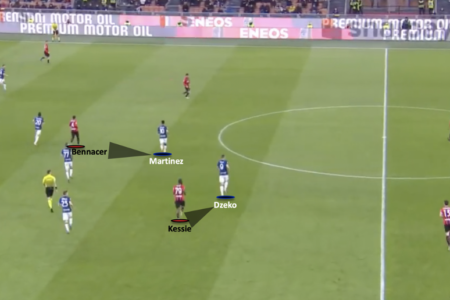