One of those fixtures you mark on your calendar is finally arriving this weekend, with Liverpool taking on Manchester City at Anfield in the Premier League. A true six-pointer, this game could have big implications in the title race, but in truth with us still in November, a win for either side will by no means decide the title. City have managed to regain their usual form almost, after a difficult spell earlier in the season, but still aren’t playing the fluent, creative football they have been known for. Liverpool, on the other hand, have been consistently getting results while not playing their best football, but still not playing poorly by any means. Injuries on Man City’s side are likely to play a large role in the game, with Laporte and Ederson big misses, as I will touch on in this analysis.

Transitions are key to the game

Any game involving high-quality opposition against Liverpool comes down to how well transitions can be stopped. Liverpool are famous for being able to create chances quickly given space or time and Pep Guardiola is well aware of this.

I expect Manchester City to set up in a similar way to how they did in the 0-0 draw at Anfield last October, a game which Jürgen Klopp called “the biggest show of respect” he and his team have had.

First, let’s look at Liverpool’s ability in transition, in order to justify City’s set up. Liverpool’s offensive transitions are purposeful, direct and positionally superb and if City’s defensive transitions aren’t accurate they will get torn apart as they have done at Anfield in previous years. Below is a good example of this, with Georginio Wijnaldum winning the ball and being surrounded by City players. City do a decent job at cutting the passing lanes, but there’s no direct pressure on the ball, meaning Wijnaldum has time to chip the ball over the counter-press and into Mohamed Salah.

From there, Salah acts as the pivot of the attack, performing a role Firmino plays in Liverpool’s build-up usually.

As we can see below, Liverpool are then able to progress up the pitch, as in offensive transitions they usually have their forwards against the backline and available to get in behind. A good ball from Salah is cut out by Ederson, who plays it back out to Salah to score. All of that chaos caused, due to one slightly sloppy counter-press.

We can see a similar situation here below from another game at Anfield, where Liverpool are able to escape the counter-press. Again, one of the forwards drops, this time Firmino, and the other two drive at City’s backline. Here Firmino lays it to Salah, who crosses for Mané to score. Again, one moment when the midfield doesn’t counter-press effectively leads to a goal.

It’s not just Liverpool who have thrived in transition against Manchester City, Wolves also had a particularly successful time at the Etihad, and again two moments changed the game.

Here, City are unable to prevent the ball from being played out after some poor passing, and Wolves quickly counter into the wide spaces. From there Rodri is too slow to make up ground on Raúl Jiménez, and Nicolás Otamendi doesn’t counter-press straight away and foul or win the ball, instead choosing to back off and wait. Wolves use their 2v2 excellently, and Otamendi waits and eventually dives in and Wolves retain possession and score.

By no means are Manchester City a poor counter-pressing team, but certainly one of the flaws in Guardiola’s system, or one of the problems he attempts to solve, is how to limit counter-attacks, something which he developed a lot in Germany. Teams who have the pace and quality, such as Liverpool and Wolves, can exploit gaps if Guardiola’s system doesn’t adapt at times.

How can City limit transitions?

So, as I’ve said, I expect City to look to limit these kinds of situations above by being slightly more conservative in possession. City did this excellently at Anfield last season in a 0-0 draw, where they would have picked up three points if not for Riyad Mahrez’s penalty miss. Early on City struggled, with Liverpool gaining some luck in transition thanks to some good pressing, but overall City limited them well.

We can see below a decent rest defence from Man City, rest defence being the shape of a team in possession while considering what happens if the ball is lost. They have five players in line with or behind Mendy who is on the ball, therefore when the ball is lost, with quality in defence they can snuff out counter-attacks. When Mendy does lose the ball, he does deliberately foul Firmino with a trip, which is something Guardiola’s sides also do to stop counter-attacks at times.

City also didn’t press Liverpool particularly high, instead operating a mid-block press and seeking to not get drawn into pressing in order to keep numbers behind the ball and prevent Liverpool playing in behind City. We can see this below, with no pressure on the ball but short passing options covered. City are deep enough that they don’t need to apply much pressure on the ball, as the space in behind is not large enough for Liverpool to exploit.

Here when Liverpool look to break, Fernandinho provides cover and balance to City’s attack and then defence in transition. Here, he counter presses quickly and fouls Salah to stop Liverpool from countering quickly.

Despite their more defensive approach at Anfield last season, Guardiola’s side still insisted on playing out from the back and City don’t have many options other than to play out or look to get in behind Liverpool’s high line.

Liverpool’s press involves the wingers cutting the passing lanes to the full-backs while pressing the centre backs, while traps are set for dropping central midfield players as we can see below. Here, City drop deep, meaning Andy Robertson doesn’t push high to press Walker. City, however, can’t progress with Liverpool cutting the forward passing lanes, and City are forced back and eventually long.

We can see the same pressing trap again, with the centre back to full back lane cut and Fernandinho being allowed to receive in space before being pressed aggressively from behind. Centre backs have to recognise when this occurs and look to avoid playing into these traps, or play into them in a way that allows them to escape.

We can see here a more successful pressing trap from Liverpool, with Henderson much closer to Fernandinho, and is therefore able to dispossess him.

Ederson is a big miss for City not just because of his goalkeeping abilities, but also due to his role in the build-up, in that Liverpool may feel they can push slightly higher up with Ederson missing, as Ederson’s amazing kicking abilities offer a threat for Man City to get in behind Liverpool’s high backline.

The absence of Aymeric Laporte and the presence of Otamendi could play a large role in both this game and the title race. Otamendi has demonstrated on numerous occasions his poor press resistance, and if Liverpool can isolate and press him, they could find success.

We can see here Otamendi’s struggles when his passing options are cut and immediate pressure is applied. Here Salah covers the pass inside and Liverpool press well. Otamendi doesn’t want to play a pass diagonally behind Salah into space, possibly in fear of a pressing trap but probably wary of Roberto Firmino intercepting. Therefore he hesitates and Firmino tackles him before scoring, demonstrating once again Liverpool’s quality in transition.

Again here, Liverpool are able to apply immediate pressure and cut passing lanes, meaning Otamendi hesitates and is dispossessed, and again Liverpool score through this moment.

Liverpool need to maximise the amount of times they can get Otamendi in situations like this, and pressing traps could be useful in doing this. Here number four(Otamendi) is left free while the other centre back is pressed into having a seemingly easy pass to Otamendi. Once the pass to Otamendi is played, Liverpool can press aggressively and win the ball.

As with all pressing, Liverpool need to try and convince Man City they have a chance of playing out, before reminding them that they don’t. 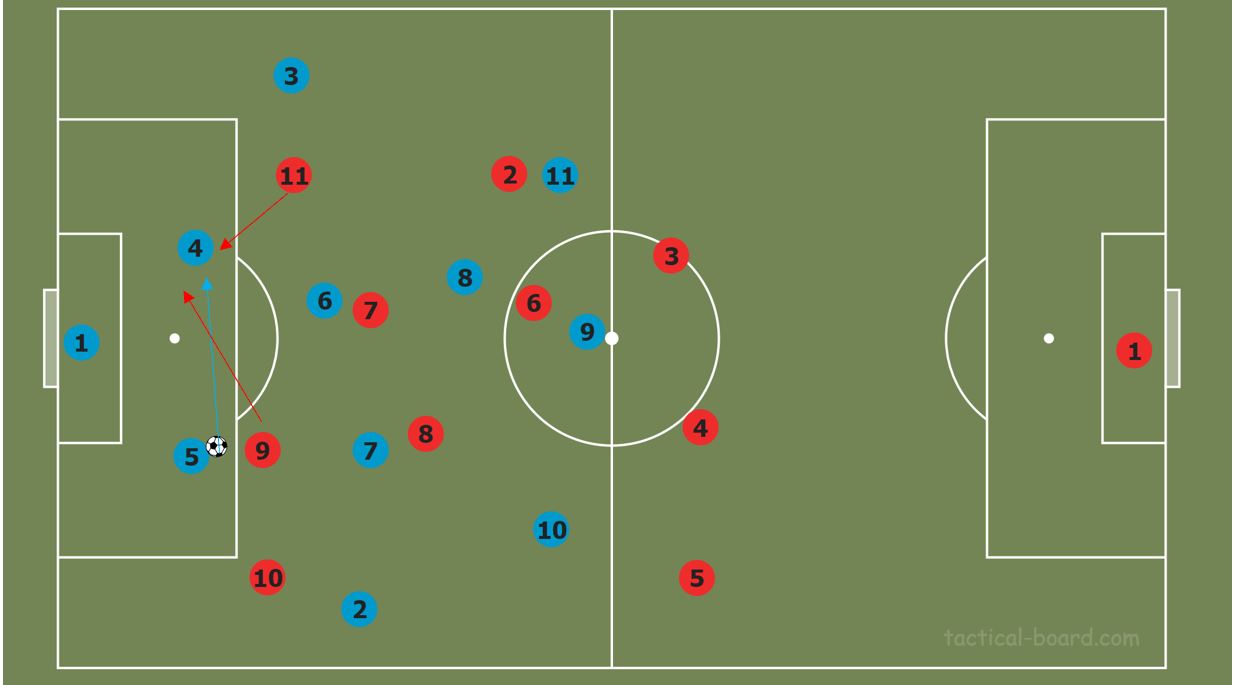 Man City have struggled at defending corners this year, and Liverpool’s set pieces are becoming notorious for winning them points in games, last weekend at Aston Villa being a prime example. Manchester City’s lack of height within their zonal system could be a real problem for them.

In this example below, City have Sterling occupying something I’ve identified in a sperate article in the Total Football Analysis magazine as the most important zone when marking zonally from corners. Sterling’s height means he can be easily outjumped, particularly with no blocker on the player opposite Sterling. Since then Walker has occupied this zone, but Tottenham also scored with a header from this zone from a corner against them.

Here, Gabriel Jesus does not block his runner, and so Jack Stephens gets an open run at the City defender at the back post, who again due to lack of height is easily out jumped and Southampton score. Liverpool’s numerous threats from set-pieces could therefore cause problems, with Liverpool just last week scoring from within that near post zone.

One routine I would like to see Liverpool use is their routine of crowding the goalkeeper, which they have done against teams such as Spurs and Barcelona, teams with relatively small goalkeepers. Claudio Bravo is only six feet tall and crowding this area would prevent Liverpool’s players from potentially having their runs blocked, and would also allow for them to maximise the use of their height and strength, as players would be jumping from a static position. The delivery, however, has to be spot on, and it can be difficult getting pace on the header and getting it through bodies in that six-yard area, as we can see below. Liverpool have also utilised this routine by loading the area to create space as we can see below, where Wijnaldum was able to score a header from within this space in this particular game.

With injuries to Manchester City, this could be a big opportunity for Liverpool to exploit the weaknesses in City’s game and make a real statement. Anfield will no doubt be bouncing, and City would certainly benefit from trying to quieten down the crowd with their tactics and making the game as low tempo as possible when Liverpool are in possession, before trying to counter-attack and use the quality of their attacking players. As mentioned, limiting transitions is key, but there are so many factors to this game and it will no doubt be interesting to see how Klopp and Guardiola battle it out tactically.