Sheffield Wednesday hosted Swansea City at Hillsborough in the Championship on Saturday, with both sides hoping to continue their promotion push. The Yorkshiremen had lost only once at home in the league heading into this clash, whilst the team from South Wales were undefeated on the road.

Perhaps unsurprisingly given their respective records the match ended 2-2, although it was not short of drama. Having trailed 0-1, Wednesday clawed themselves back level to grab a 91st-minute second goal. However, deep into stoppage time, Ben Wilmot poked home from a corner to ensure the Swans would not leave empty-handed.

In this tactical analysis, we will analyse the tactics of both teams, and use our analysis to look at the tactics behind the result. 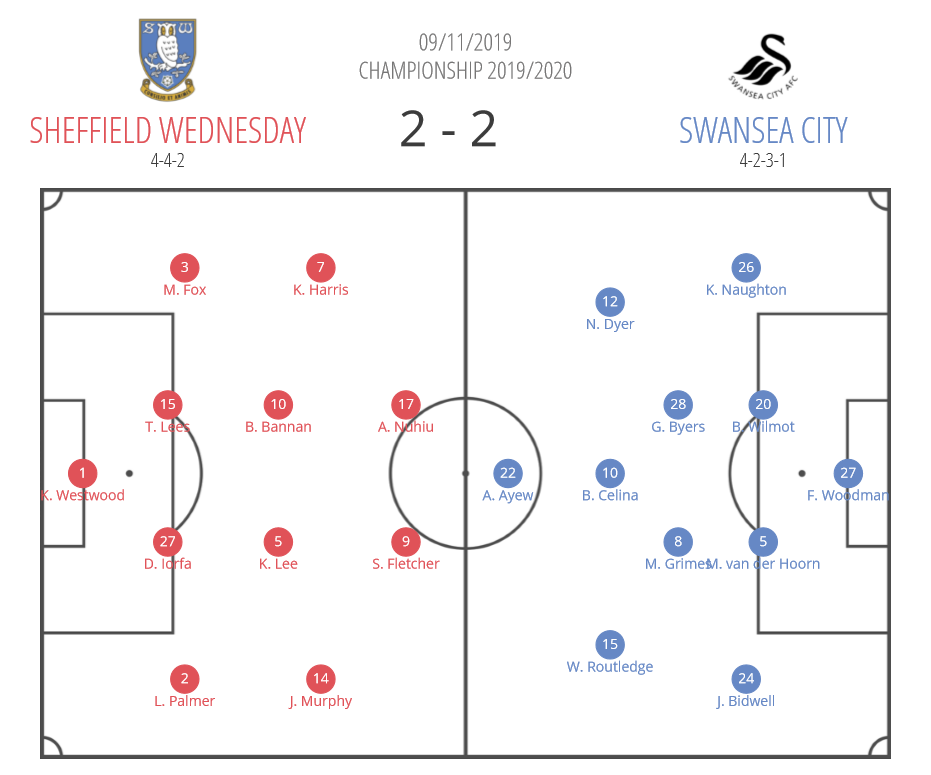 Wednesday manager Garry Monk – formerly of Swansea, where he played 226 times and managed 77 games – made four changes from their outing at Blackburn Rovers last time out: Tom Lees replaced the ill Julian Borner to partner Dominic Iorfa at centre half; Barry Bannan coming in for Sam Hutchinson in central midfield to play alongside Kieran Lee; Jacob Murphy taking the place of fellow winger Adam Reach; Atdhe Nuhiu preferred to Joey Pelupessy, as they switched to a 4-4-2 from the 4-1-4-1 used at Ewood Park.

As for the Swans, they kept faith with the same XI that secured a late win away at Wigan Athletic in their last game. George Byers and Matt Grimes were the pair tasked with providing solidity within their 4-2-3-1 formation as the two genuine central midfielders. Wayne Routledge, Bersant Celina and Nathan Dyer were the creative trio behind striker Andre Ayew.

It was the visitors who enjoyed the more of the ball in the game with 54%, with both sides very similar in their ball usage – Monk’s men completing 72% of passes in comparison to 73% for Swansea. However, Wednesday were the side to really assert their dominance on proceedings, highlighted by their 20 shots to Swansea’s 13. They were wasteful in their conversions though, hitting the target with only seven of them (albeit they struck the post twice), whereas City had six on target from 13 taken.

In a rapid opening to the game, Wednesday immediately put their visitors on the back foot. They used their pace and power to fashion several openings – some clear-cut, some not – and really stamped their authority on the early stages of the match as they pulled the Swansea defence all over with slick interplay and quick movements.

The speed of wide men Murphy and Kadeem Harris, combined with the intelligence and nous of strikers Steven Fletcher and Nuhiu, meant that Wednesday were able to move the ball in-and-around the final third quickly and efficiently. Furthermore, midfielders Lee and Bannan were receptive to the movements of their more offensive teammates to be able to capitalise on the spaces created and raid into them accordingly. It proved a real challenge for the Swansea backline and midfield to be able to keep up with the positional interchange and rotation of the Wednesday players, as one such example can be seen below.

Here, Fletcher drops short to receive the ball to feet from Lees, dragging out the Swansea central defender, Mike van der Hoorn, on his back in the process and creating the space in-behind the City defence, highlighted by the yellow box. Fletcher lays the ball back to Murphy, who has held his position off the backline, who then plays through to the run of Lee, breaking untracked from deep. 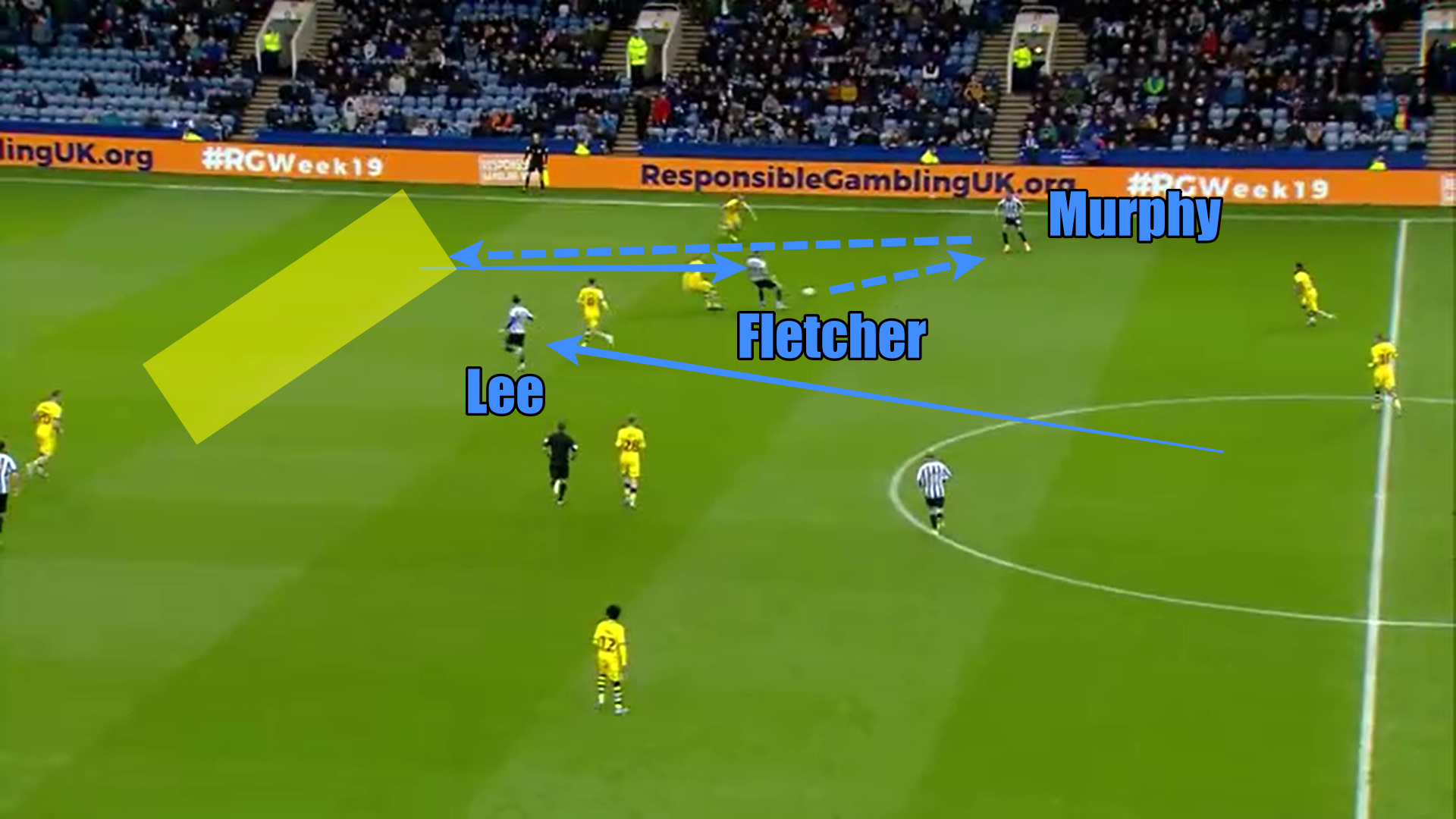 They were not limited to just quick play on the floor, however. They were not afraid to create openings for a more direct style of play too, playing to the physical strengths of Fletcher and Nuhiu – 6’2” and 6’6” tall respectively. They did not go long straight from their defence, instead cleverly manipulating spaces and positions to create crossing opportunities towards their two frontmen.

Similarly to their pattern of play above, they did so by dominating the half-space – in this instance with a numerical overload. Here, they created a 4 v 3 out on the left to ensure that they always had a spare man to pass to and thereby give themselves a greater chance of keeping and advancing possession. They cleverly created a diamond with their four to ensure they had good horizontal and vertical width, making it harder for Swansea’s players to mark the quartet in the process. As mentioned, the end goal of this was to create a cross towards their strikers, and so to ensure that when it was able to happen they had a good chance of taking advantage, they produced a 3 v 3 within Swansea’s penalty area to give themselves good numbers. 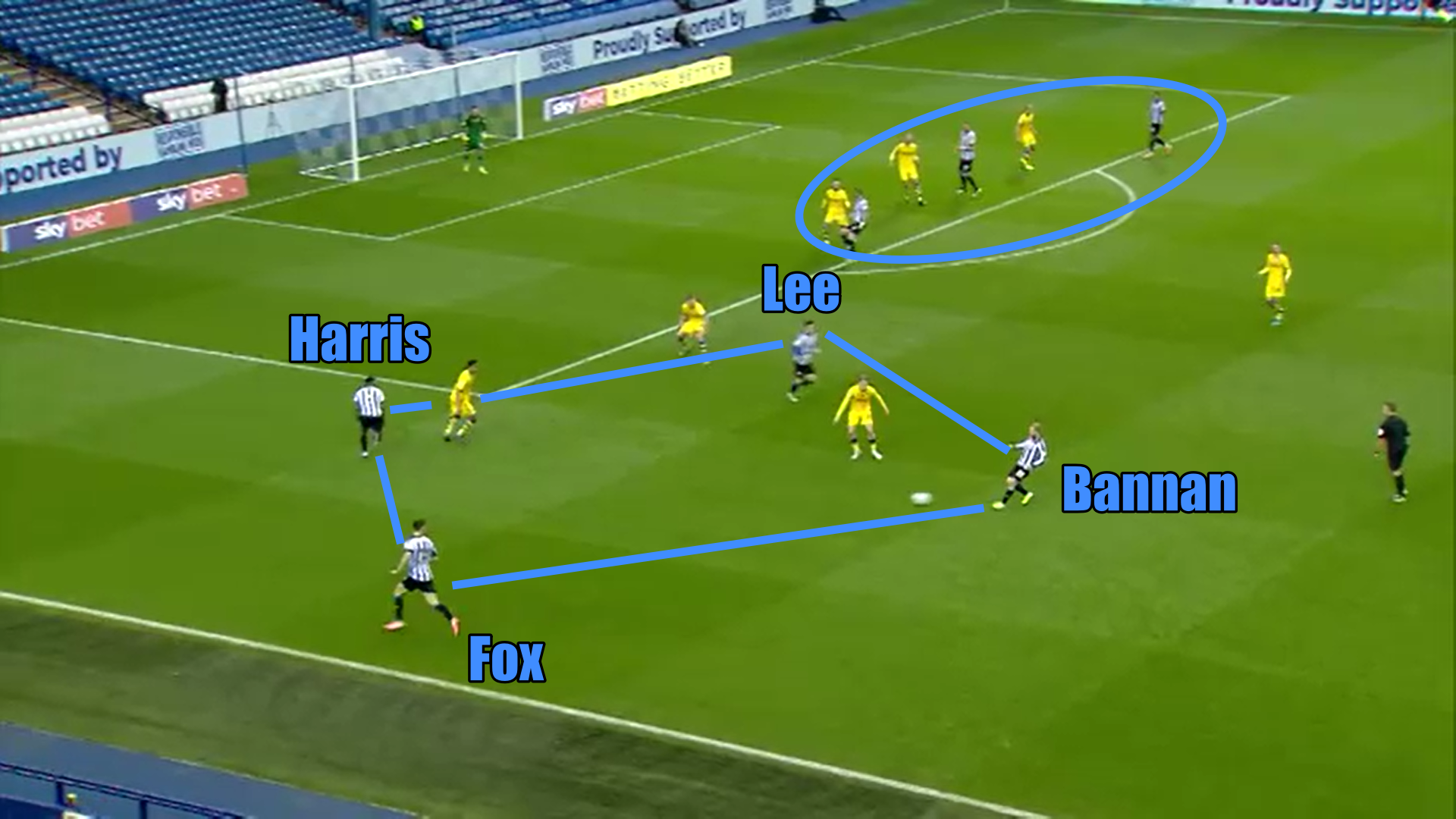 Throughout the 90 minutes they attempted 30 crossing opportunities – 16 more than Swansea – yet they were successful with only ten. They did, though, win 39 aerial duels, compared to the Swans’ count of 13.

The aerial prowess of their two attackers were also well used in a more linear way, with Wednesday mixing up their distribution to sometimes look for runners in advance of one of their two strikers to gamble on flick-ons. This was another viable method of attack for Wednesday, with the strength, speed and power of their forwards ensuring that they always had a very good chance of not only winning the first header, but then being able to capitalise on the second ball too. One such example is seen below, with Fletcher and the energetic Lee running beyond Nuhiu’s flick. 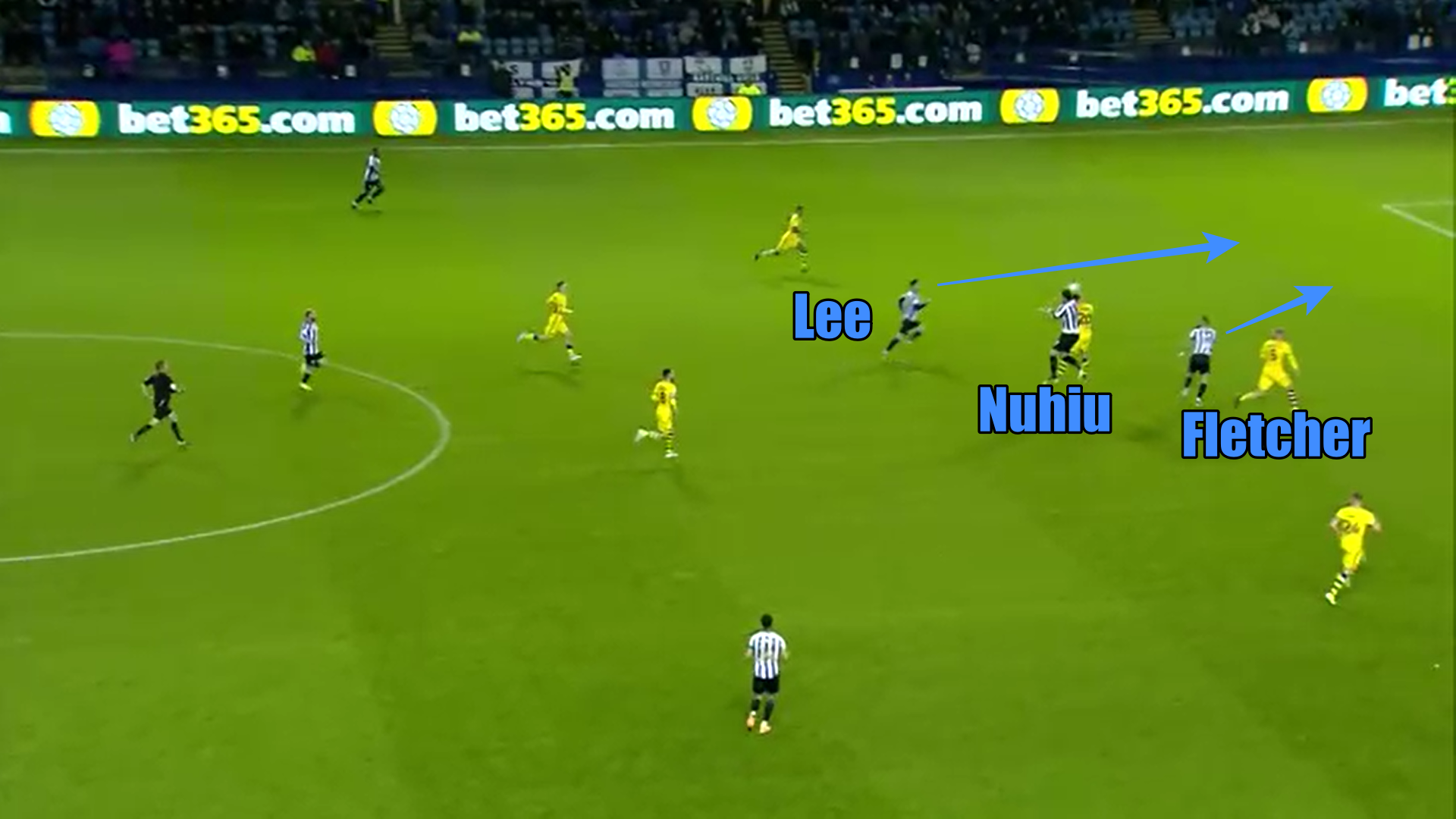 Swans grow into the game

Despite the dominance of the home side, credit must be given to Steve Cooper’s team for not just holding firm in the face of Sheffield pressure, but also retaining a genuine attacking threat. Their ability to pose problems for Wednesday were inextricably linked to the liveliness of their attacking four, their extreme pace and trickery offering a permanent out-ball on the counter-attack.

The quartet were adept at dropping into spaces between the lines, situating themselves behind the midfield press of the home side and therefore able to receive on the half-turn at run at the Wednesday defence – Celina in particular, being the ‘number ten’ in the system. Cooper alluded in his post-match interview that their game plan relied heavily on being able to find the tricky attacker in between the lines, and when they did they invariably looked a very dangerous attacking unit. His ability to receive and turn in an instant was vital to their success in transition and being able to hurt Wednesday on the counter, and so in order to do so he frequently popped up in clever positions that allowed him the chance to do just this – as can be seen below.

With Lee and Bannan here relatively stretched horizontally, Celina is able to occupy the space behind the pair and receive instantly upon turnover of possession. However, Wednesday’s tactics allowed him to be a success within such a tactic – as we will now analyse. 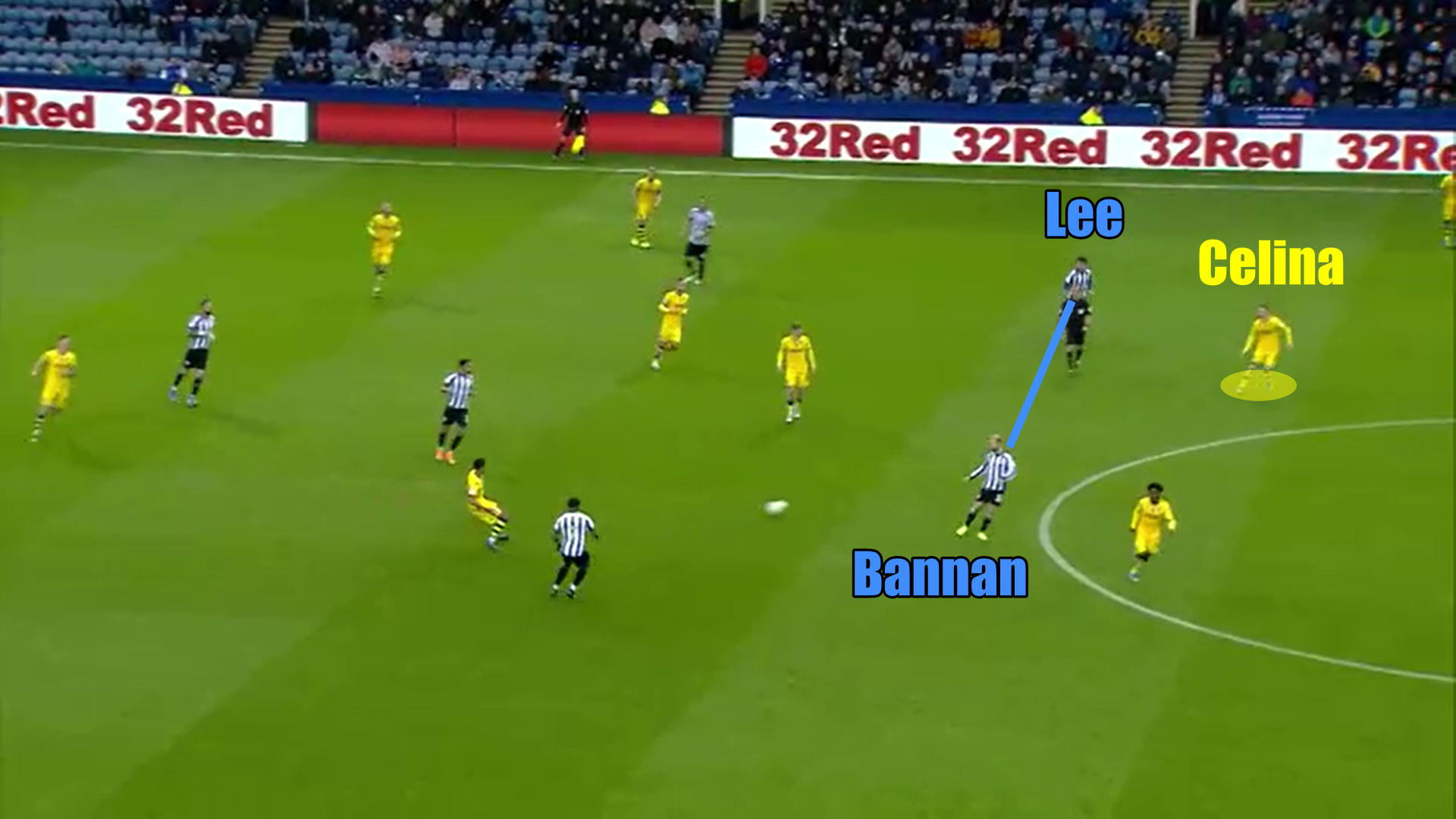 As it was a 2 v 3 centrally in the Swans’ favour, the tactic preferred by Monk was for his central two to engage Swansea’s midfield two in the hope of squeezing them deep into the lower central defensive third and thereby preventing the service to Celina.

However, the use of such a tactic meant that acres of space was left in-behind the pair and ahead of their back four for any of Swansea’s attackers to drift into unmarked. The Wednesday two had to be aggressive in their pressing and engagement of Grimes and Byers, yet if the Swans could move the ball sharply and quickly enough then they were able to bypass this press and allow their creative talents to receive the ball in offensively dangerous positions.

The intent of Bannan and Lee can clearly be seen in the image below, with the duo tight on their respective individual opponents. However, this has left a gaping hole, highlighted in yellow, for any Swansea attacker to take up, and although it remained unoccupied on this occasion, it is a clear indicator as to how Cooper was trying to set his team up to attack. 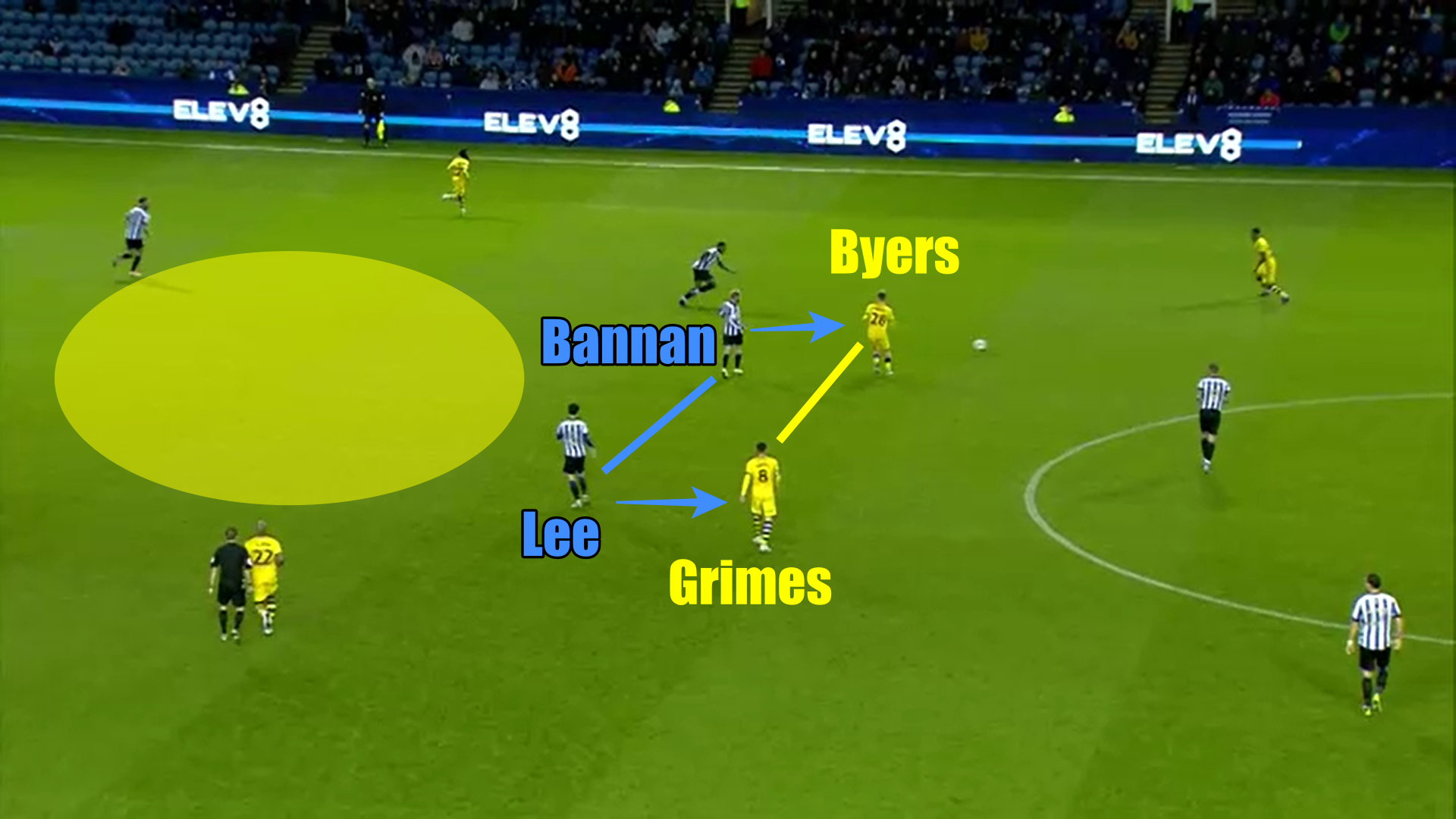 The below example is a slight variation, albeit in the same overall tactical theme, in that is Byers who profits from the Wednesday press as opposed to Celina. Again, the Owls’ midfield two are unable to stop the ball being moved into the area in-behind them, with Byers able to step up into such a position and receive from Grimes.  This was a smart and well thought out tactic implemented by the Welshmen, taking advantage of a weakness with Wednesday’s system: their only grievance will be the fact that they were unable to heavily profit from it. 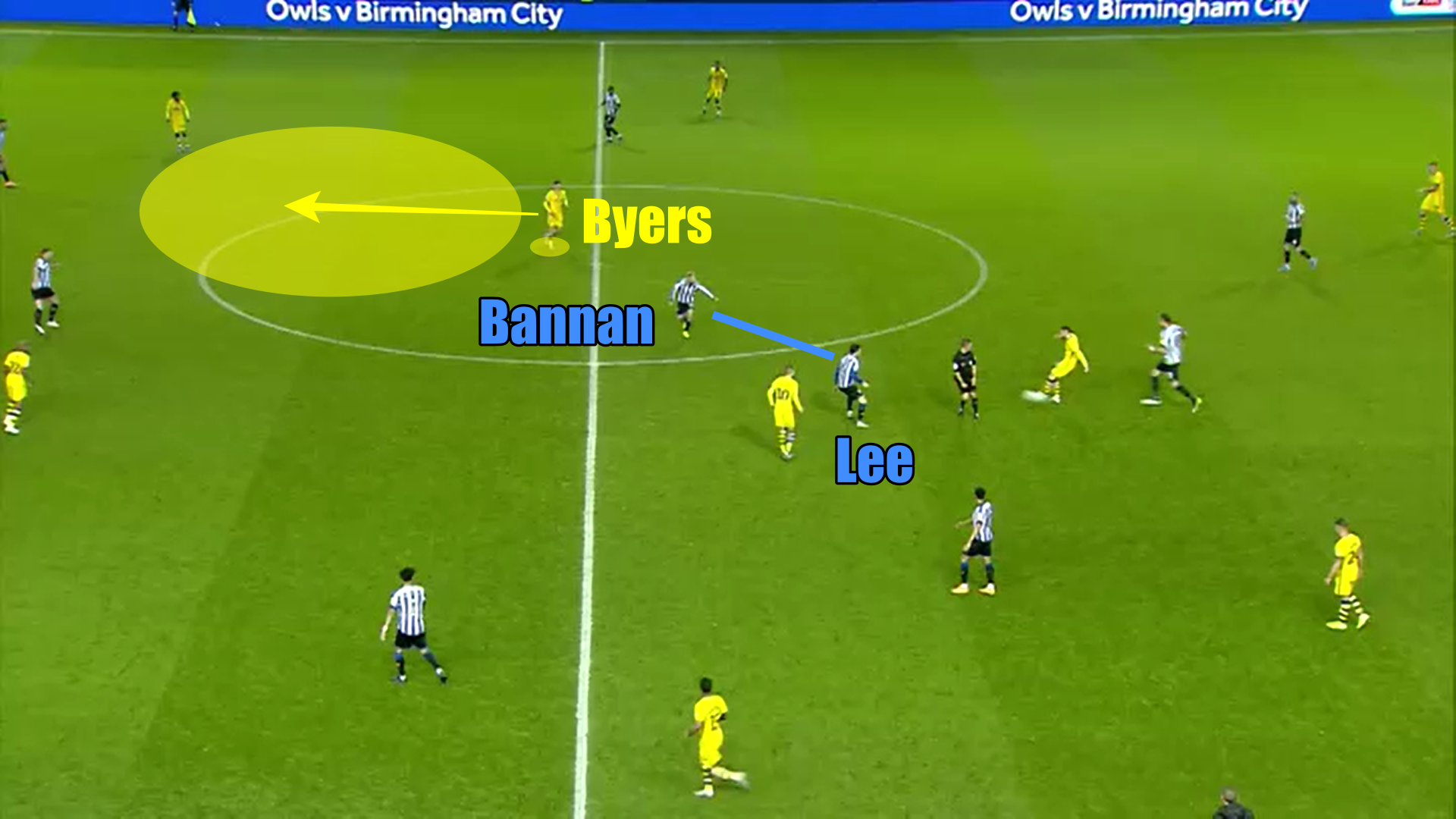 There is no doubt that it was an enthralling game, and Wednesday will be hugely frustrated that they were unable to take the points that their chances created and territory arguably deserved. However, it should be noted that Swansea came with an effective game plan of which to hurt the Owls from, and they too will be disappointed to not have left with more.