In the title pursuit: How Simeone could outwit Koeman’s Barca for his first Camp Nou win in a decade – tactical analysis

Although Atletico Madrid have been holding the lead through the most part of the 2020/21 season, the battle for the La Liga title is still on. Chased by both Barcelona and Real Madrid, Atleti need to keep their consistency in the remaining games of this campaign in order to reach the long-awaited success in Diego Simeone’s 10th year on charge as manager.

The upcoming meeting with Barca on Camp Nou is going to be decisive for both teams as Atletico could lose their leading spot in the blink of an eye or grab the three points moving a step closer to winning the title. Barcelona on the other side could tilt the scales in their favour by getting an important win prior to three considerably easy meetings in the next three rounds.

With no huge injury blows for both teams, it is expected to be a great tactical battle where Simeone will be looking to get his first win at Camp Nou. This preview in the form of tactical analysis will examine how both teams could expose each other and what could be the winning tactics for both coaches.

Diego Simeone’s side relies on solid defensive actions and smart attacking movement which brought them the needed consistency this term. They have the best defence in the league, conceding only 22 goals mostly using their favoured 4-4-2 formation. There is a possibility of Simeone setting the team up in a 3-5-2 against Barcelona for better coverage both in defence and attack. The team would need to be careful during transitions against Blaugrana’s quick and well-measured attacking actions.

Playing in a 5-3-2 out of possession could help them in covering the opposition’s players better, especially having in mind Barca’s tendency to overload the advanced areas. They tend to frequently rely on smart passing, making Atleti’s task even harder and the need of increasing their positional awareness even bigger. Using the back-three could allow them to employ more players up front and expose the opposition with more movement off the ball. Providing more passing options in the final third could be crucial for delivering the ball to Luis Suárez who Barca would try to isolate upfront.

Barcelona will be relying on their usual attacking strategy in efforts to break through Atleti’s well-structured defence but the midfield line would need to provide better support during transitions, especially having in mind Marcos Llorente’s movement and passing. Ronald Koeman would most probably stick to a back-three defensive line in possession, relying on a lot of movement and dragging the opposition’s players out of position.

The need of covering Llorente tightly

Barcelona’s first defensive task would be limiting the spaces between the lines and keeping Suárez away from the goal. Blaugrana’s know best the direct threat that he provides. They need to focus on their marking strategy and try to isolate him in the advanced areas blocking the passing lanes and limiting his movement. Making sure that they cover the wide areas too in order to stop Atletico from crossing that often would be crucial too.

While these will be their key responsibilities, they shouldn’t overcommit to covering the Uruguayan due to the huge threat from the back that Llorente provides. While the 34-year-old is Los Colchoneros’ top goalscorer, Llorente is the player who gives them more options in attack both by supporting his teammates and by providing direct threat. While he usually occupies more of the wide areas, he contributes a lot centrally too.

The Spaniard could be their key weapon especially if Barca’s defensive set-up limits the spaces in the advanced areas. That’s because of his ability to shoot from distance. Whenever Barcelona cover the penalty area too tightly, he could provide a threat from outside the box. This gives them more options in attack and could increase the team’s efficiency on the goal.

The importance of not giving away set-piece opportunities

Despite having Lionel Messi and Antoine Griezmann, Barcelona need to have a Plan B in attack. Having in mind Atleti’s defensive performance they need to look for different solutions to break their structure. This could happen by taking advantage of their set-piece opportunities.

Barcelona have been very successful in their attacking set-plays this season, scoring 10 goals and using their chances smartly. That’s why Atleti need to be careful and not commit individual errors since they could result in giving away set-play opportunities. While their actions in the box are usually solid and they might avoid conceding from corners, they might not have a chance against Messi’s free-kick proficiency.

Simeone’s side commit fouls quite frequently (12.85 avg per game) and this could affect their performance against Barcelona. This is not only important for the outcome against them but also for their future games. There is a risk of losing their regular starter in defence Oscar Hermoso due to yellow card suspension, which might shake up not only their defensive performance but also their build-up play where he plays a key role.

Having Yannick Carrasco as a wing-back might prove crucial

Barcelona’s defensive performance could take some improvements and they have conceded in all of their last five La Liga games. That’s why Yannick Carrasco’s presence as a wing-back might prove crucial. Atletico tend to use the wide areas in attack and it’s Carrasco who create a lot of opportunities for his teammates. His dribbling abilities could help him in taking on Barca’s defenders and creating chances.

His passing could prove crucial both in their positional attacks but on a counter too. Atleti are good at stealing the ball from the opposition which could cause Barcelona a lot of struggles defensively as they fail to defend counter-attacks quite frequently due to their high positioning and overcommitment to attack.

Barcelona will most probably try to press high when out of possession and not give a chance for building up from the back. Pressing with the wing-backs could be risky due to the spaces that could open behind but it might be the only way to stop Atletico who use the wide areas in their build-up play. Similarly to their strategy against Sevilla, Koeman might want his players to step up in one vs one situations and block the opposition’s efforts to progress the ball.

The stakes are high and it will take a lot of analysis, tactical flexibility and strong individual performances from both sides if they want to get the three points. Diego Simeone will be extremely determined to outwit Koeman and get his first win at Camp Nou as Atletico Madrid manager. Barcelona on the other side could make a huge step towards taking over the leading spot which will give them a huge advantage prior to the three less intensive upcoming fixtures. 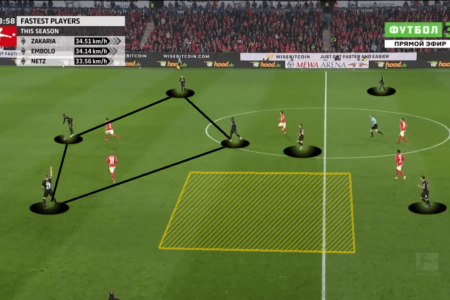 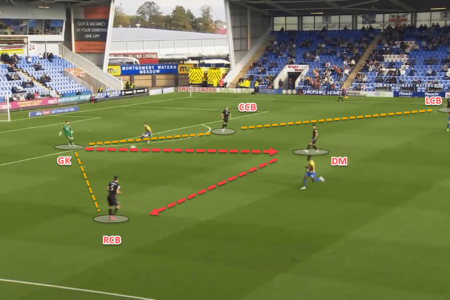