Spain will meet Poland for the second fixture of EURO 2020‘s Group E at Estadio La Cartuja as both teams will be battling for winning the three precious points that would serve them in playing the third game with less tension and worry about their qualification chances.

Spain will be the team who will try to impose their playing style at the start of the match in order to succeed in splitting Poland’s defence as soon as possible to not let what happened against Sweden be repeated again. But at the same time, Poland will aim at stopping Spain while also thinking about exploiting counter-attacks to score.

In this tactical analysis preview, we will explore what can Luis Enrique change to make his team reach the goal more often and especially be more effective in terms of finishing the actions. Moreover, a look at how can Poland resist and win points against Spain using  tactics will be provided to give a meticulous idea on both teams.

Spain will most probably start this second EURO 2020 match by relying on their conventional 4-3-3 line-up with Unai Simón as a goalkeeper, Marcos Llorente, Eric García, Aymeric Laporte and Jordi Alba in defence, a midfield composed of Rodri, Koke and Thiago Alcântara to give more attacking support and key passes, while in attack both Ferran Torres and Dani Olmo would play on the wings.

For the striker role however, Luis Enrique will have to make a decision following Álvaro Morata’s disappointing finishing issues during the first game of the tournament, either he gives him his total trust once again and instructs him to do certain new things on the pitch, or replace him with Gerard Moreno who has done well this season and deserves to get a chance as well. 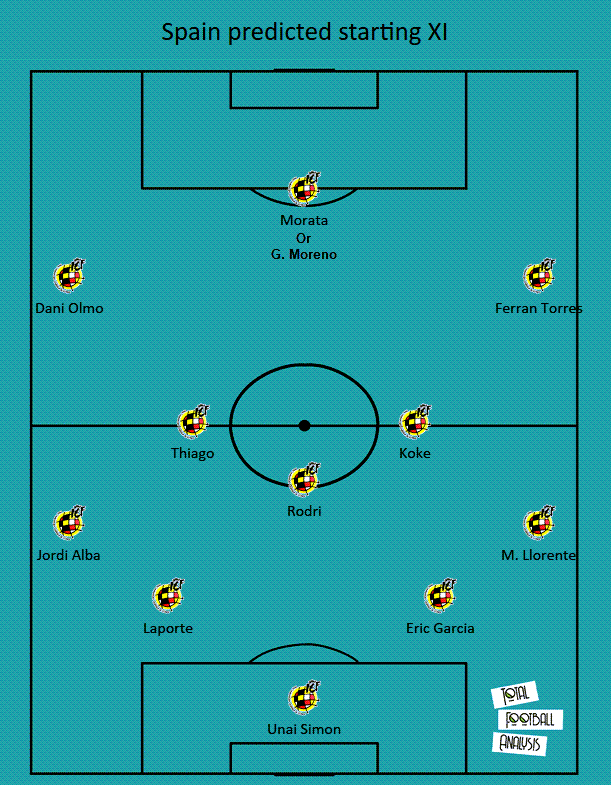 On the other hand, Paulo Sousa would switch his 3-5-2 formation which didn’t give good results against Slovakia to move to the 4-2-3-1 formation which becomes a 4-4-2 when defending.

The line-up would be ideally composed of Wojciech Szczęsny as a goalkeeper, Bartosz Bereszyński, Jan Bednarek, Kamil Glik and Maciej Rybus in defence, Karol Linetty and Jakub Moder as central midfielders since Grzegorz Krychowiak is suspended, Kamil Jóźwiak and Arkadiusz Milik as wingers who help in both attack and defence, while Piotr Zieliński will be the one to link midfield to Robert Lewandowski, the team’s captain and striker, by supporting him with key passes. 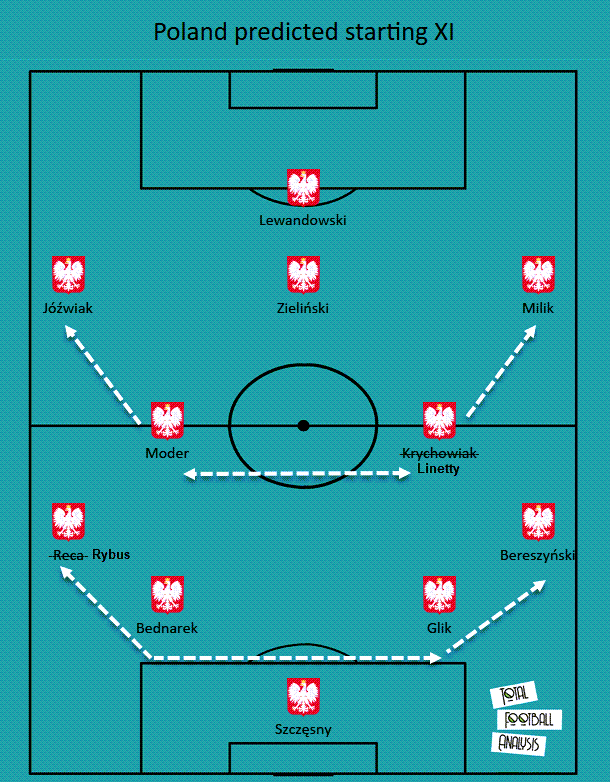 Spain’s attacking performances rely heavily on positional play and on the support of both full-backs. At the same time, the three midfielders often keep hold of the ball and remain patient until they see overlaps on one of the wings in order to pass. And although this usually creates crossing attempts either by Alba or by Llorente, the result is often a missed chance since Spain’s attacking players lacked accurate decision-making inside the box as they were also marked most of the times. This implies that Spain’s most used attacking plan became exposed to opponents and it is no longer fruitful. Nevertheless, Spain kept using this plan extensively against Sweden and they relied heavily on the left wing where Alba advanced continuously. And although he was usually able to get past his markers, his crosses were often intercepted by the Swedish defenders. 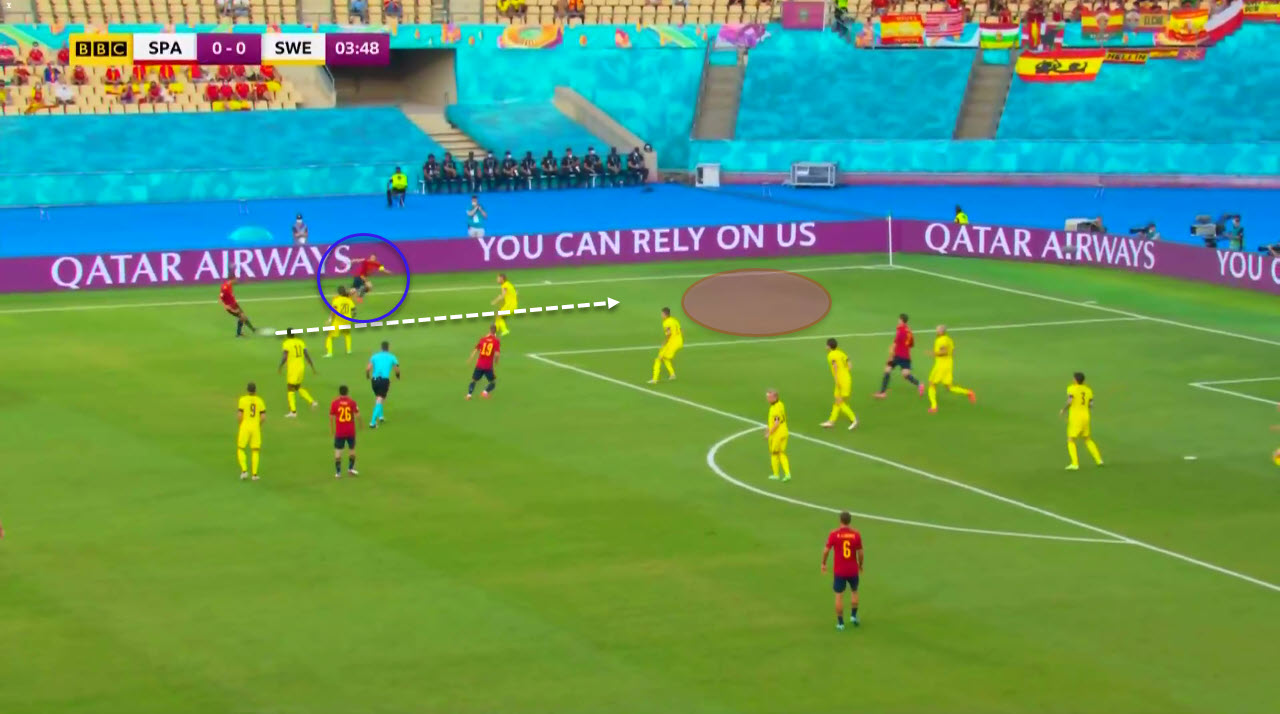 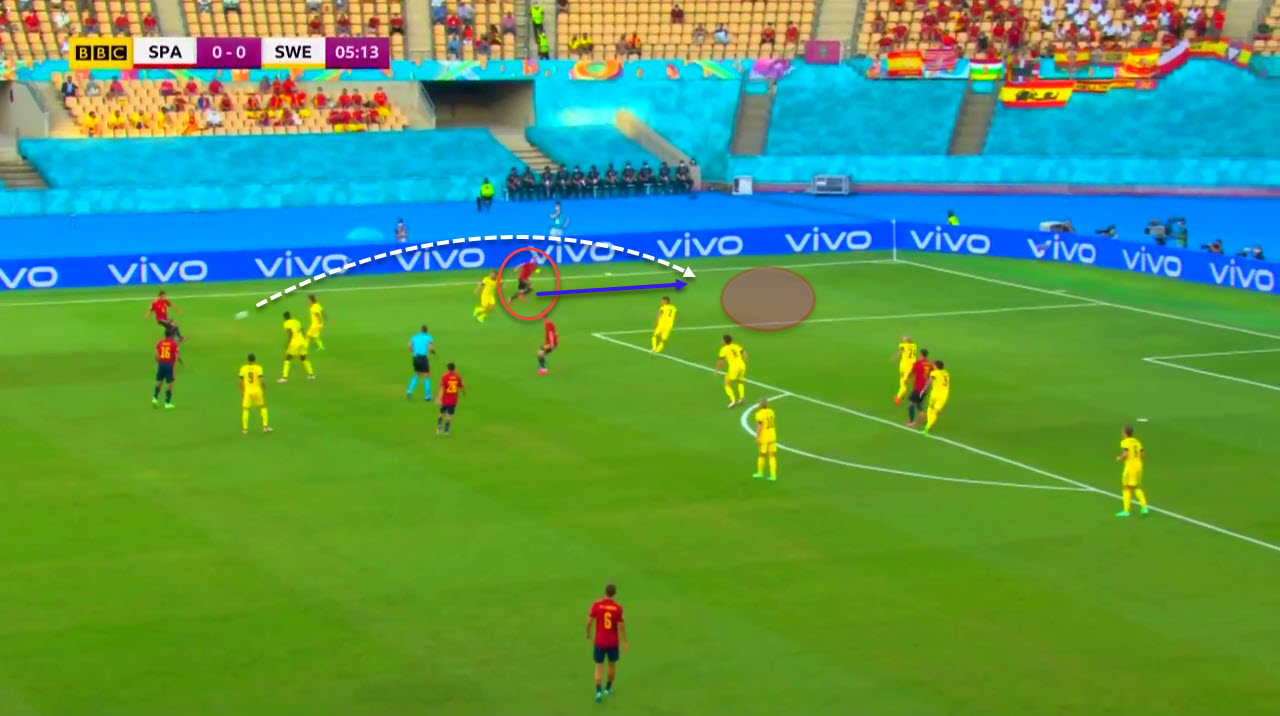 Apart from this attacking solution, Spain’s midfielders did not show a lot of readiness to support the attacking actions by giving passing options and moving without the ball in the final third. Instead, they usually preferred to support only by passing, crossing or making one-two combinations in midfield. These however were not enough since Morata remained alone most of the time inside the box and he was only helped by Olmo and Torres who joined him inside the box from time to time.

This lack of midfielders’ penetrations made it harder to Spain to have numerical superiority against teams who remain at the back with more than nine players. And in order to avoid the same problem from happening against Poland who will also defend with numbers, Rodri, Koke and Thiago/Pedri will need to make an extra effort by exploiting the little space left between the lines whenever the attacking players ask for the ball in advanced positions since this will oblige defenders to mark them and create room for manoeuvre for Spain’s midfielders. This however did not happen against Sweden, like you can see in the following example. 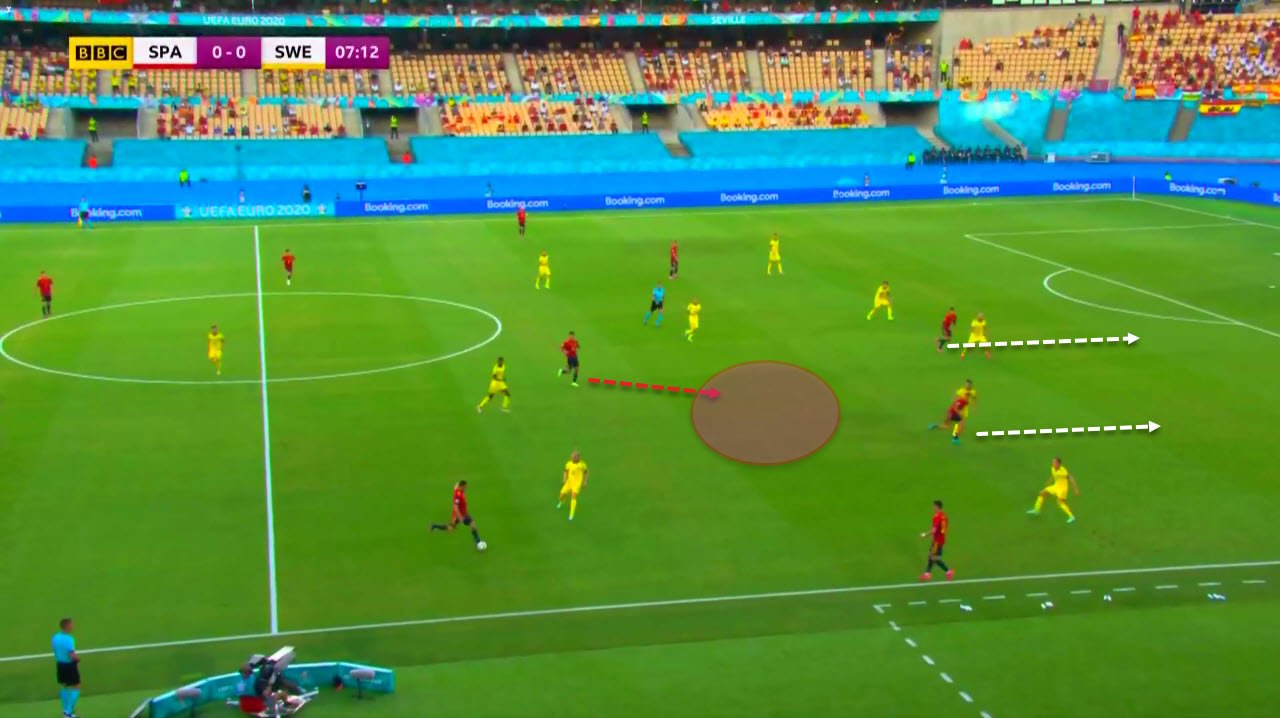 Apart from the lack of movement between the lines, Spain’s midfielders were also unaware of the situation that surrounded them on many occasions since they could have exploited them better by running towards the free space and giving passing options for their teammates in dangerous positions like what happened in this chance.

Spain’s midfielder here saw the free space left by Sweden’s defenders near the far post since they were busy marking Morata. And he could have surprised his marker by running quickly towards that spot to give an option for Llorente who was also waiting for a similar penetration that would break the defence. However, this did not happen. 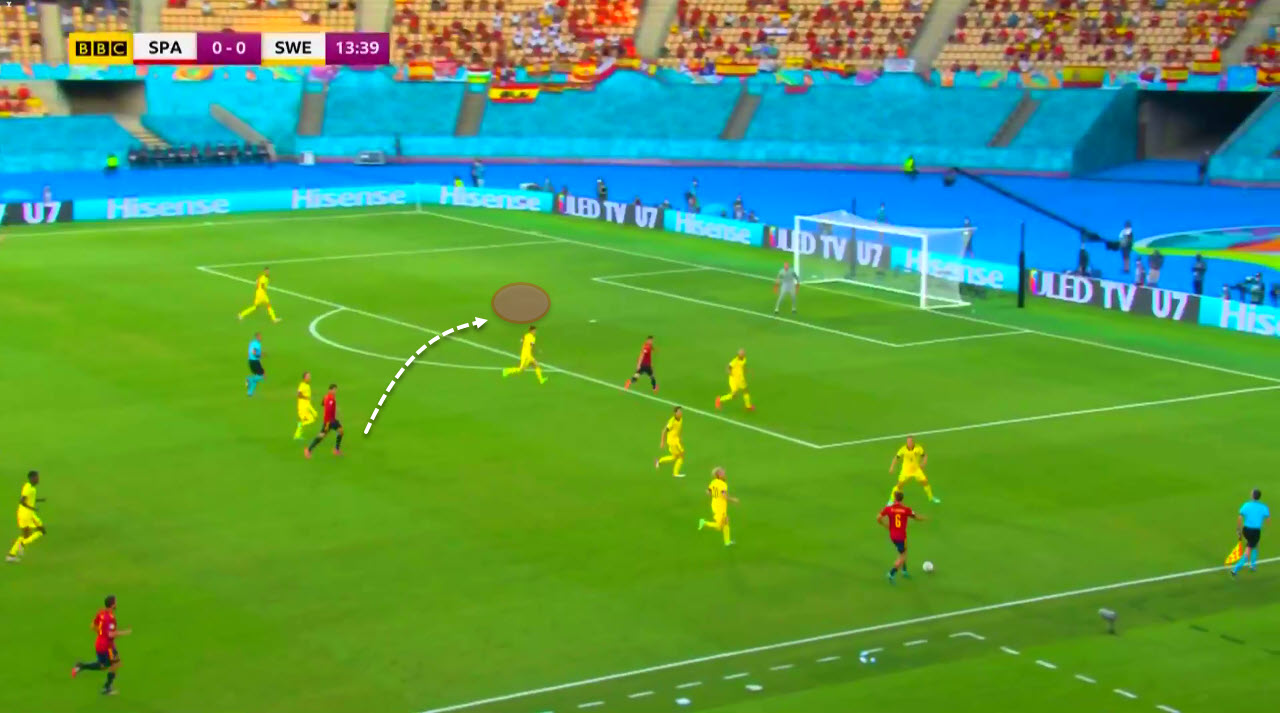 At the same time, in the few times in which Morata was supported inside the box by Olmo, Spain were able ti create one of that match’s most dangerous chances since Olmo’s movement behind Morata affected Sweden’s marking plans and enabled the crosser to have a much more suitable option than crossing towards the marked Morata.

Therefore, the support of Spain’s midfielders and wingers inside the box would not only be fundamental for being more clinical, but it would also give Morata much more room for movement without being surrounded by three defenders each time. 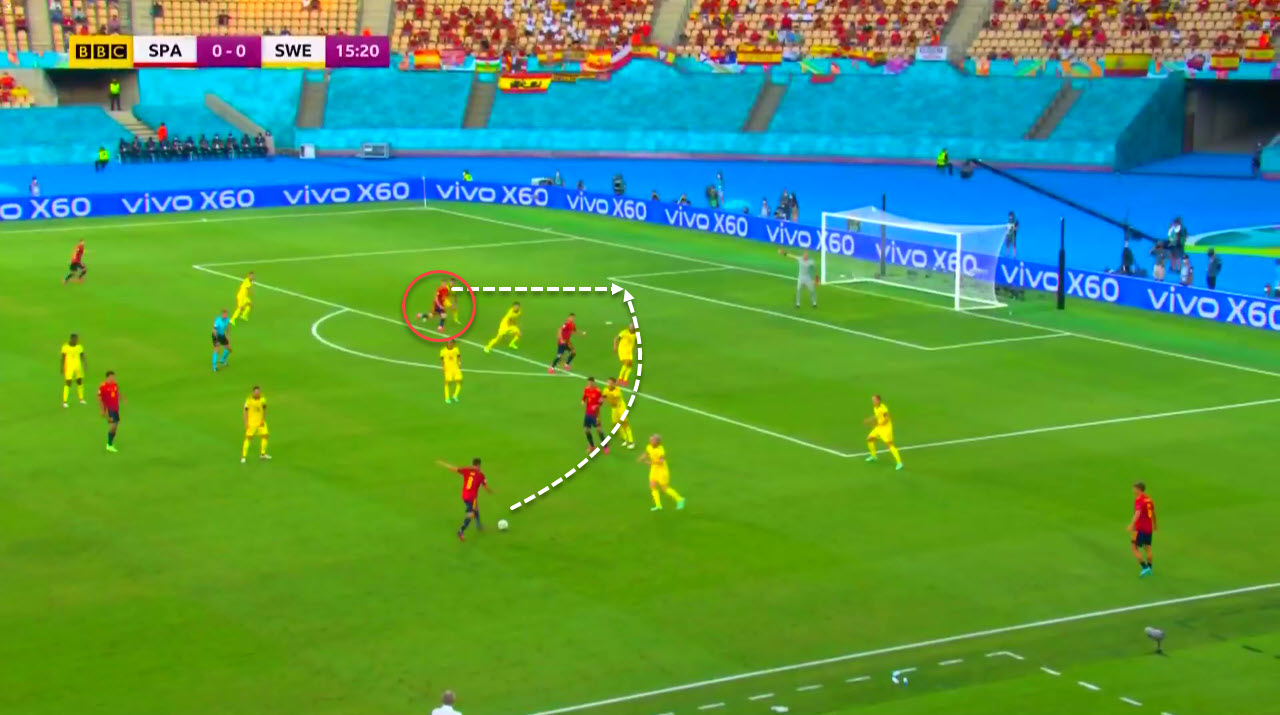 To support this idea, it is sufficient to show the following example which highlights Spain’s issues and shows that even in the rare times when midfielders asked for the ball inside the box, goalscoring attempts occured and Spain was close to scoring. Here, as the arrows show, Olmo waited exactly for a midfielder’s penetration to find someone to pass to since Morata and Torres were both marked. And as soon as he noticed the movement, he gave the midfielder a through pass yet the latter lacked the needed finishing effectiveness since his shot wenty away from the goal. And this finishing aspect is also something to focus on ahead of Poland’s game whether for midfielders or attackers. 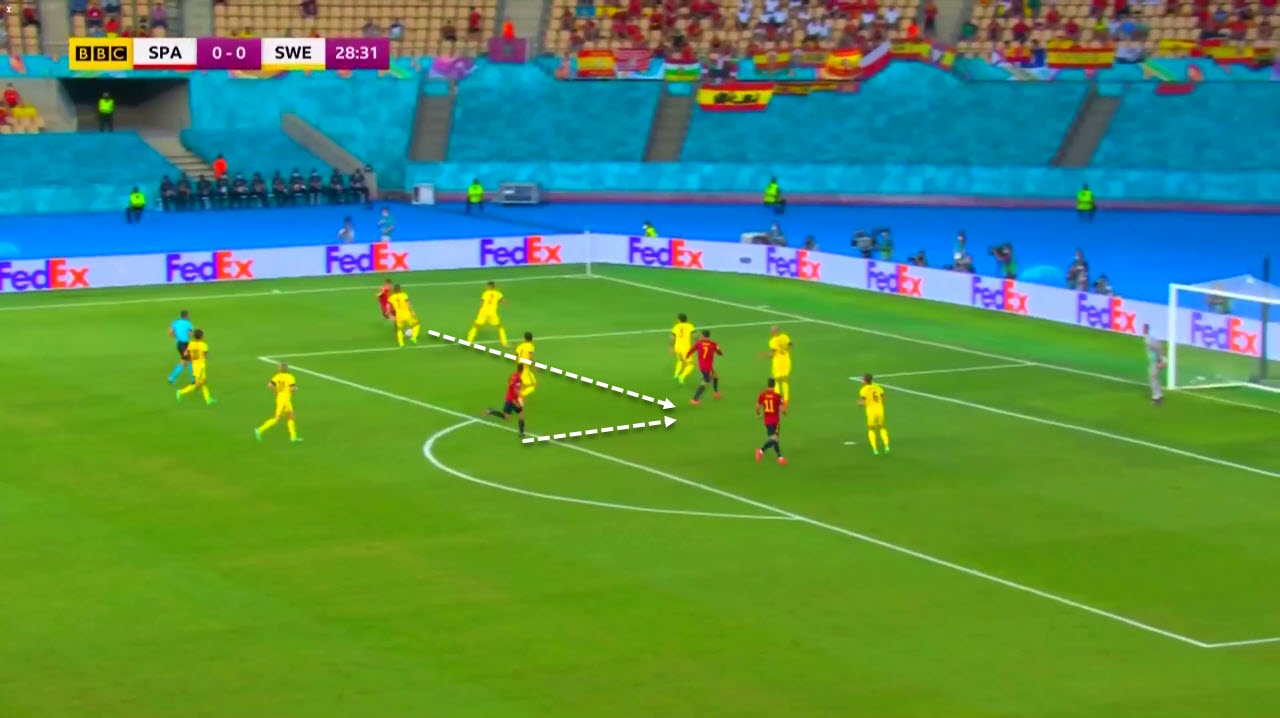 In the same context, Morata’s finishing issues have been subject to a lot of criticism lately due to missing some clear goalscoring chances especially against Sweden. Therefore, Luis Enrique will need to fix his player’s concretisation problems or rather replace him with Gerard Moreno who would exploit this chance.  In fact, Morata focused more on serving his teammates while playing with his back to the goal but at the same time his energy was more directed towards passing. Therefore, making a balance between passing and finishing would serve Morata to be more clinical in front of the goal if he will play against Poland. 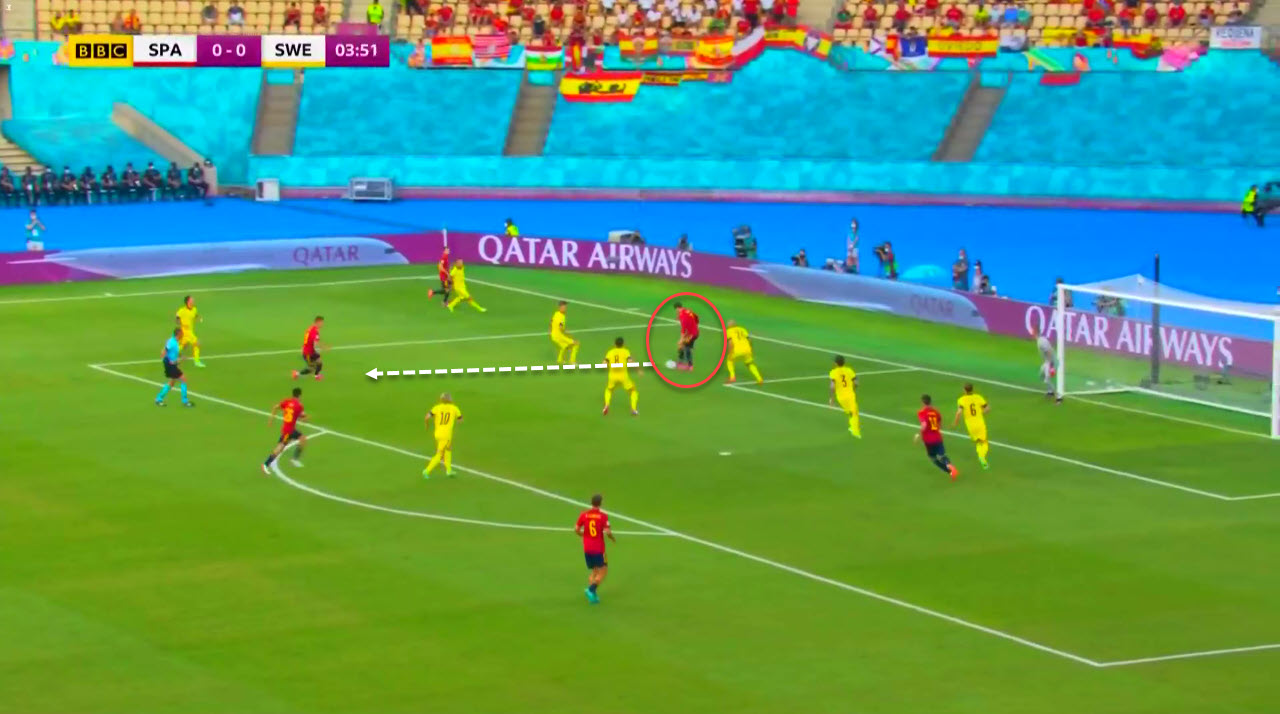 Poland’s ultimate plan for this match would be to defend with patience using the 4-4-2 formation while at the same time wait for any counter-attacking opportunities since they have the tools needed to surprise Spain’s defence. In reality, Spain usually keep their defensive bloc very high in order to keep possession in their opponent’s own half. Yet, they are not very attentive when they lose the ball and they are likely to concede dangerous chances. And with the existence of players like Lewandowski and Zieliński in the final third, Poland can score goals by exploiting counter-attacks, something that Sweden were about to do as well, like you can see in this example. 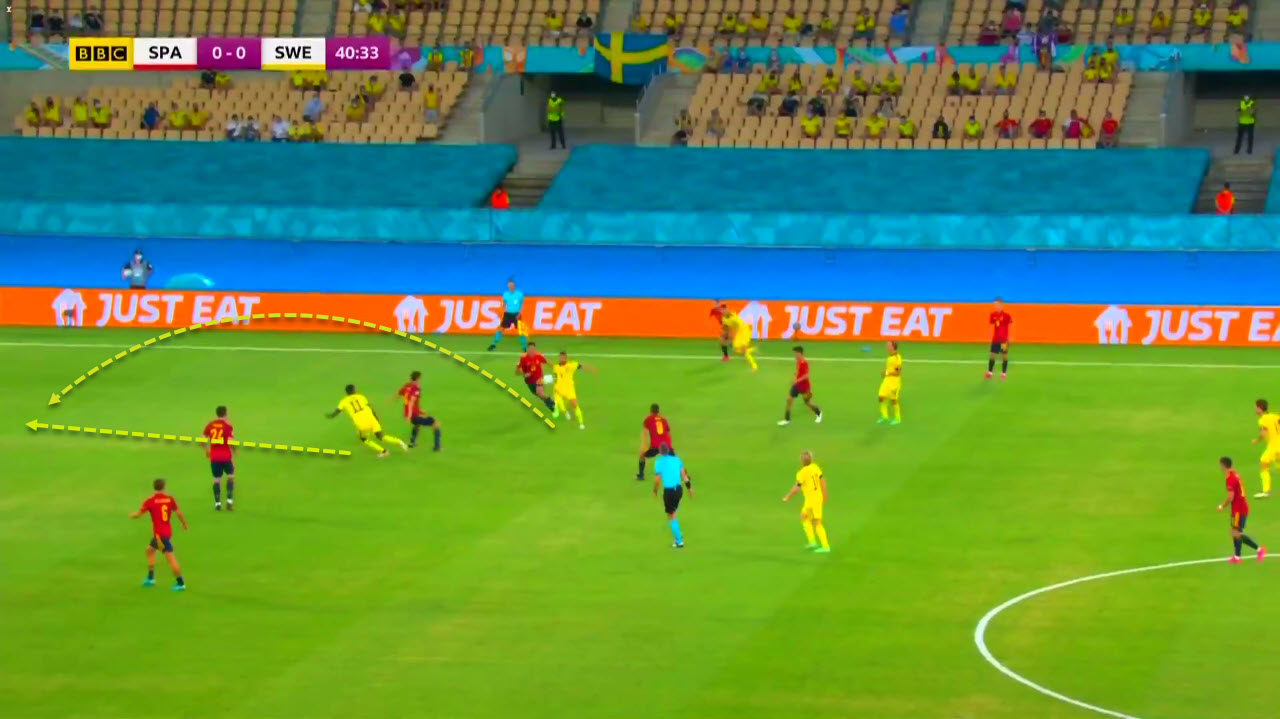 The chemistry between Zieliński and Lewandowski is fundamental for Poland and it is the source of the team’s attacking threat since Zieliński has the freedom to move as an advanced playmaker at times and as a second striker at other times. And with Lewandowski moving a lot without the ball, Zieliński often tries to find him with through passes and one-two combinations to reach the goal. Moreover, both wingers can be helpful by staying wide to keep the opposing defence wide and allow Lewandowski to have more freedom in the penalty area, just like in this example. 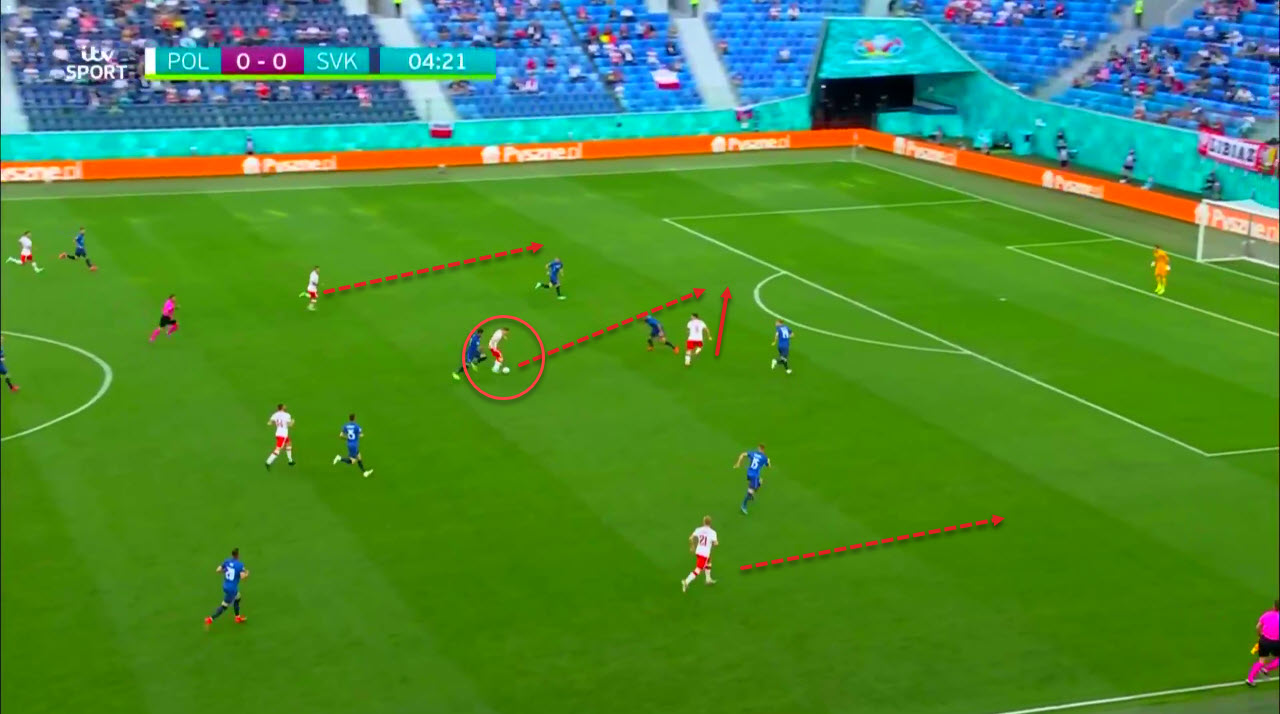 Nevertheless, Poland need to be attentive when defending against Spanish players since they are good dribblers. Poland made some mistakes that costed them goals against Slovakia and if these marking errors will be repeated against Spain, Poland will surely be in trouble since Spain’s players are even more effective in 1 vs 1 situations. Collective defending also needs to be improved ahead of this game and defensive/midfield players will need to cover whenever their teammates fail at stopping the opponent, as opposed to what happened in this example. 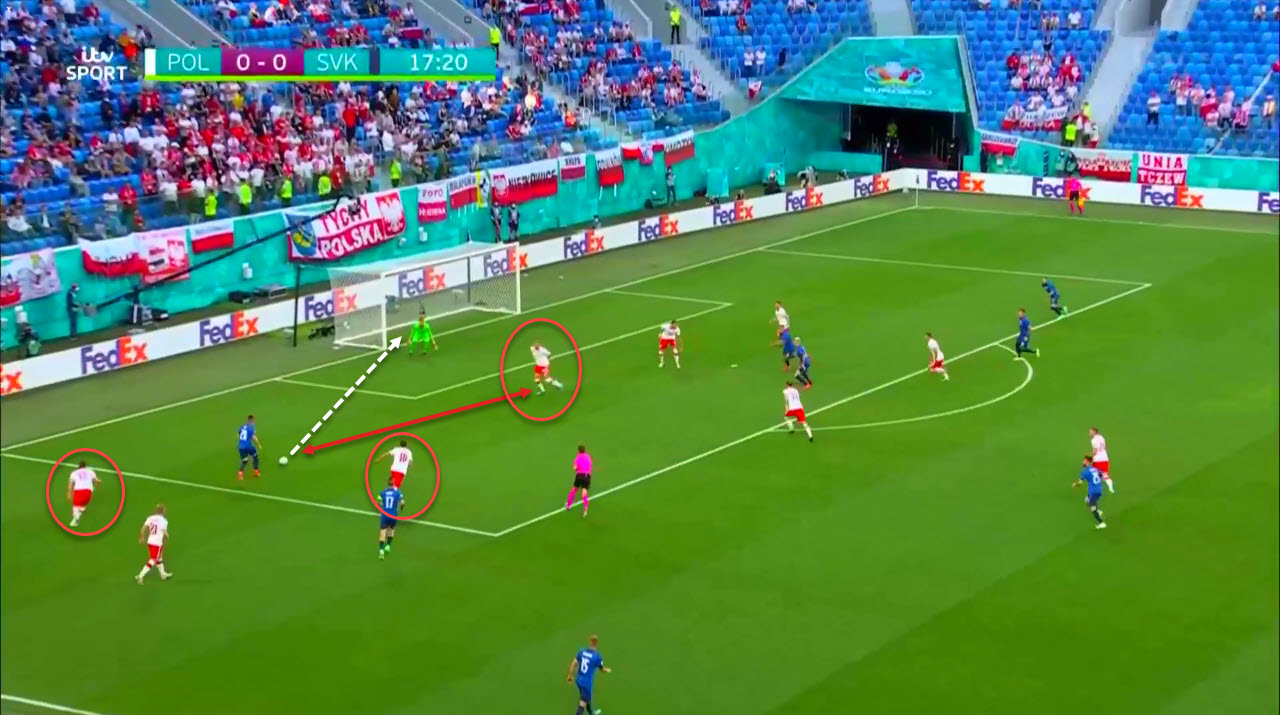 The game will be a decisive one for both teams since they both need the three points. Spain however are the favourites to win given the quality of players they have, even though Poland are capable of resisting defensively and snatching a draw. 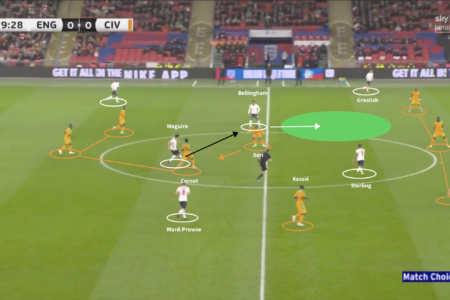