EURO 2020: Spain’s positional struggles against Sweden will continue in the tournament – tactical analysis

Spain and Sweden’s clash in Group E of EURO 2020 was played at the Estadio de La Cartuja in Seville on Monday night. EURO 2020 marks the first time that Luis Enrique is leading Spain at a major tournament, and after all the problems that plagued their 2018 World Cup campaign, La Roja came into this tournament with some more certainty, even though there has been some criticism levelled at the former Barcelona manager already for not having a single Real Madrid player in the squad. Aymeric Laporte was a last-minute inclusion after he switched international allegiance from France, and he will be a vital piece of the puzzle for Spain, especially with Sergio Ramos not being picked due to injury.

Meanwhile, Sweden have had issues of their own – Zlatan Ibrahimovic announced his return to international football, only to suffer an injury that ruled him out of the tournament. This may well turn out to be a blessing in disguise for the Swedes, but their preparation for this match was certainly hit hard by the news that Dejan Kulusevski had tested positive for COVID-19.

Spain registered 16 shots and 82% possession in this match but failed to put the ball past Robin Olsen, leading to the first goalless draw so far at the tournament. Was this down to bad luck, or are there some serious issues that Spain need to fix? This tactical analysis explains Spain’s major problems against Sweden – without solving these, they will struggle to break down low blocks throughout EURO 2020.

Spain opted for their conventional 4-3-3 lineup with Rodrigo Hernández as the holding midfielder in the absence of Sergio Busquets, who had tested positive for COVID-19 before the tournament started. Enrique gave 18-year-old Pedri a surprise start in midfield, ahead of the likes of Thiago Alcântara and Fabián Ruiz, but the rest of the team was largely as expected, with Laporte and Pau Torres as the central defensive pair, Marcos Llorente at right-back, and Alvaro Morata as the lone striker.

Sweden lined up in a 4-4-2 as usual. Without Kulusevski, Sebastian Larsson started with his AIK teammate – Mikael Lustig on the right side. Janne Andersson’s preference for experience in the lineup could also be seen at the back, where Victor Lindelöf partnered Marcus Danielson at the centre of the defence with Pontus Jansson staying on the bench.

Spain dominated the game with a lot of possession, and their counter-pressing was also excellent as the players moved together as a unit. Whenever the ball was lost, they applied pressure quickly, and with the players close to each other, it was possible to win the ball back in an easier manner.

However, the positional structure still had some issues – Spain’s struggle to find rhythm in their attack was down to the suboptimal occupation of spaces in several areas on the pitch.

Despite having three central midfielders against Sweden’s pair, and sometimes even with four players in that zone when Morata dropped deeper, Spain struggled to create numerical superiority in the central zones. While Sweden did have quick dribblers who could be a threat on the counter-attack, La Roja were a little too conservative with their positioning in midfield.

Llorente would often push higher from right-back as Koke dropped into the right half-spaces to receive the ball. This temporarily created a back three and a 3-2 shape for Spain in the build-up phase, which helped to overload the first line of the Swedish side. However, the centre-backs were not aggressive enough on and off the ball as they did not facilitate central progression enough. In this image, Spain could safely circulate the ball but even when the ball was moved to Pau Torres, they were not breaking any lines.

From a macro perspective, this means the team lacked occupation of spaces behind the Swedish midfield. Since the centre-backs were too deep, the midfielders needed to drop to receive short passes. We often saw Pedri staying in front of Kristoffer Olsson instead of moving on his blindside. This was suboptimal as Spain lost the manipulation of the second and third line as we show in the next example.

Spain had excellent players to progress the attack even from such suboptimal situations. Pedri moved to the space behind Olsson cleverly and suddenly Spain were in the final third. However, another issue was the lack of a ‘proper’ striker to pressure the Swedish defence. In this game, Morata came deep to receive and try creating an overload at the centre quite often, but this did not help create an advantage.

Here, when the Juventus striker dropped deep, Pedri would not have any chance to feed a through ball. The Swedish backline was very comfortable as there was nothing to defend. Without Morata running behind, Pedri could only continue carrying the ball until he was dispossessed, stalling Spain’s attacking momentum.

This image is a summary of the above issues. Dropping too deep and expecting the ball to feet was an issue that all of the Spanish midfielders had. Although they maintained a 2-5-3 structure with players occupying all five vertical channels here, there was no need for so many players in the midfield zone.

The wide zones were occupied by both the winger and the full-back, and this was not optimal as the wingers did not make diagonal runs infield and behind the Swedish defensive line. Meanwhile, all three of the Spanish central midfielders are ahead of the Swedish defence when at least one of them should have pushed on and joined the attacking line to occupy the space beyond the midfield zone. With Morata also dropping deep quite often, you can see how all of this led to a crowded midfield zone with no vertical penetration.

Using Llorente at right-back was a smart decision as the Atlético Madrid man adds versatility to the team. However, he did not impact the play enough, and was relatively quiet when he did not have space to move into.

On too many occasions, he overcrowded the right channel with Ferran Torres. When both stayed out wide together, they could not interact as the passing angle was hugely limited. Even worse, as shown in this image, was this sort of situation where Koke also moved wide, which meant that no Spanish players were occupying the wide half-space on that side, once again limiting their options to circulate possession and find penetration.

Timid in the final third

As mentioned in the analysis, even though Spain had issues in the second phase, they were still able to enter the final third through the exceptional quality of their players. However, they failed to score in this match, and while Olsen deserves credit for some excellent saves, overall, Spain were not aggressive enough with their movement and positioning in the final third.

In the early stages of the game, Spain controlled possession and surrounded Sweden in the attacking third. However, they never committed enough numbers to attack the penalty box when the ball was out wide. In this image, Llorente should have been higher and making the highlighted runs into the space conceded by the Swedish defence, rather than asking for possession outside the penalty area. 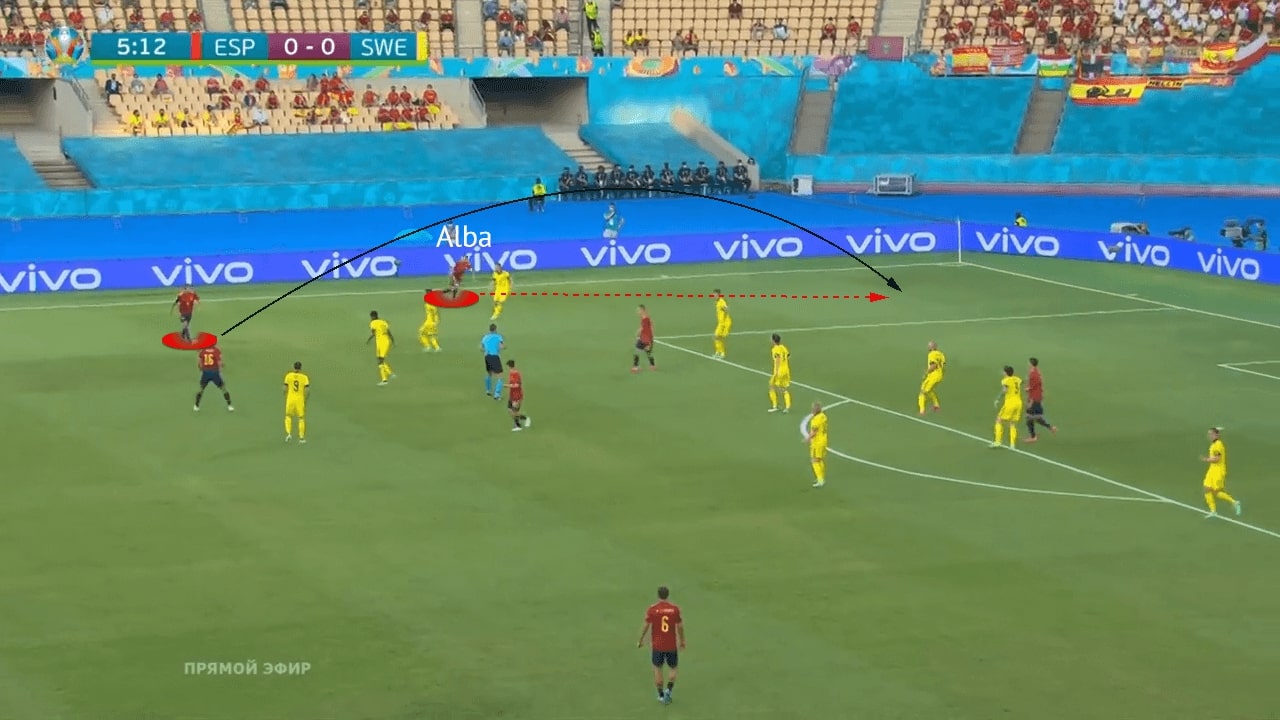 On the opposite flank, Jordi Alba did make quite a few runs from deeper areas to try and provide width and depth, and this gave Dani Olmo the freedom to move into the half-spaces. 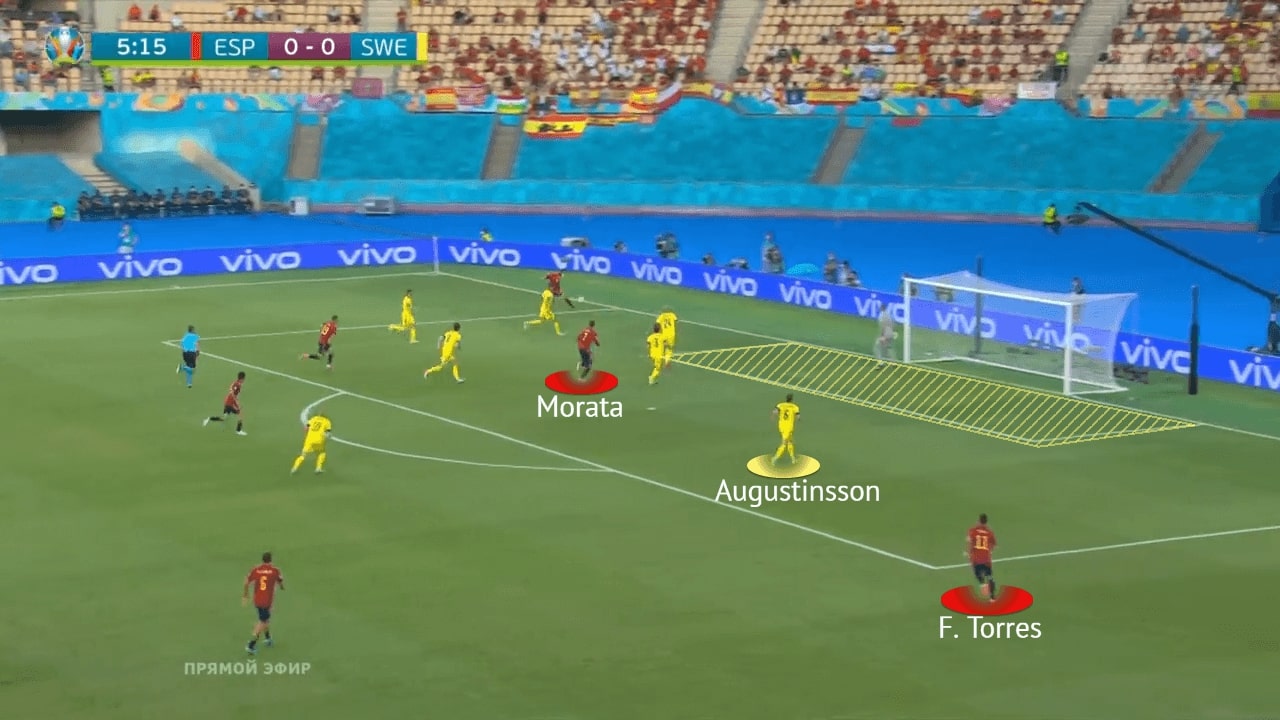 …but even as he manages to get in position for a low cross across the box, there is no Spanish player attacking the six-yard area. Morata tends to hang back and only attack the near post on occasion, while Ferran Torres was not aggressive enough and stayed outside the box rather than attacking the far post – this was especially glaring when you notice that Augustinsson has his back turned to Torres and he would have been making such a run on the Swedish left-back’s blindside as a result. 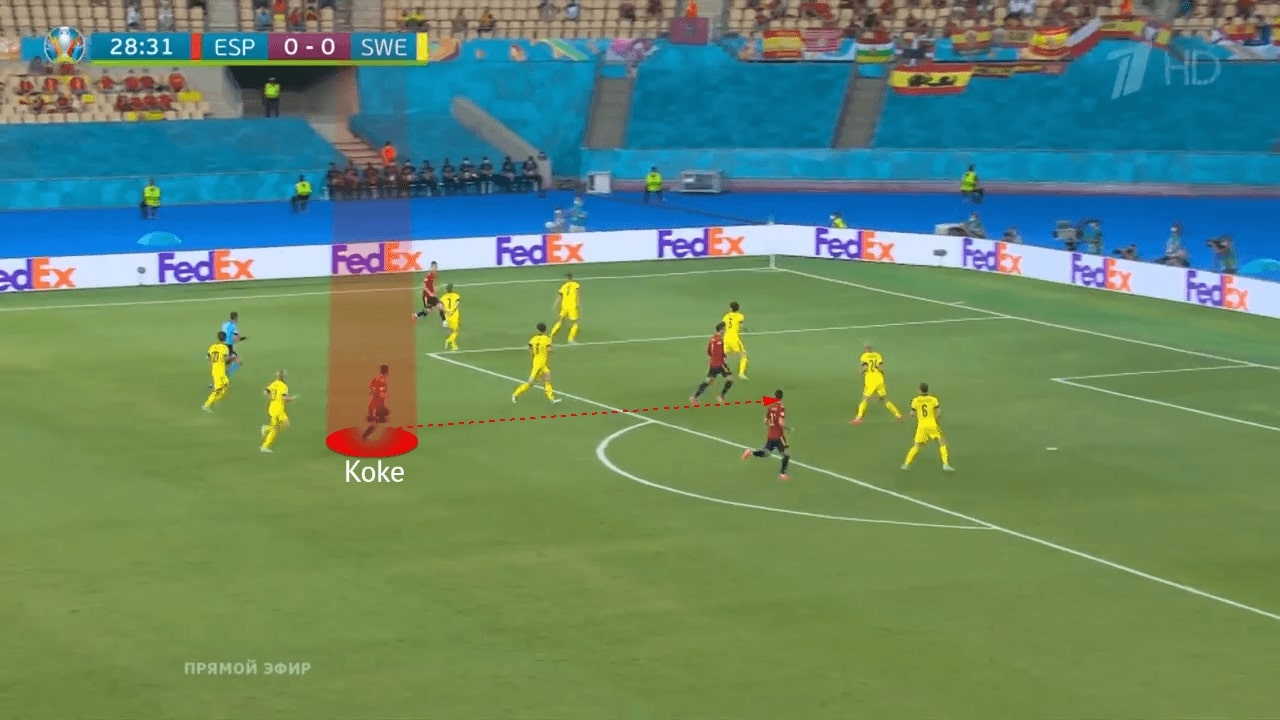 Koke was perhaps the best player on the pitch – he was contributing in the build-up phase before charging into the box to attack deliveries from out wide, the only Spanish to do so consistently in the match.

One of Spain’s biggest chances came through such a run by the Atletico Madrid midfielder in the first half, where he made a late run into the box to receive the ball but his finishing was awry.

Improvement in the second half, but not sustained

Spain looked better in the second half – they did solve these problems in a better manner and their positional structure also improved, but they continued to lack decisiveness and aggression in the final third. 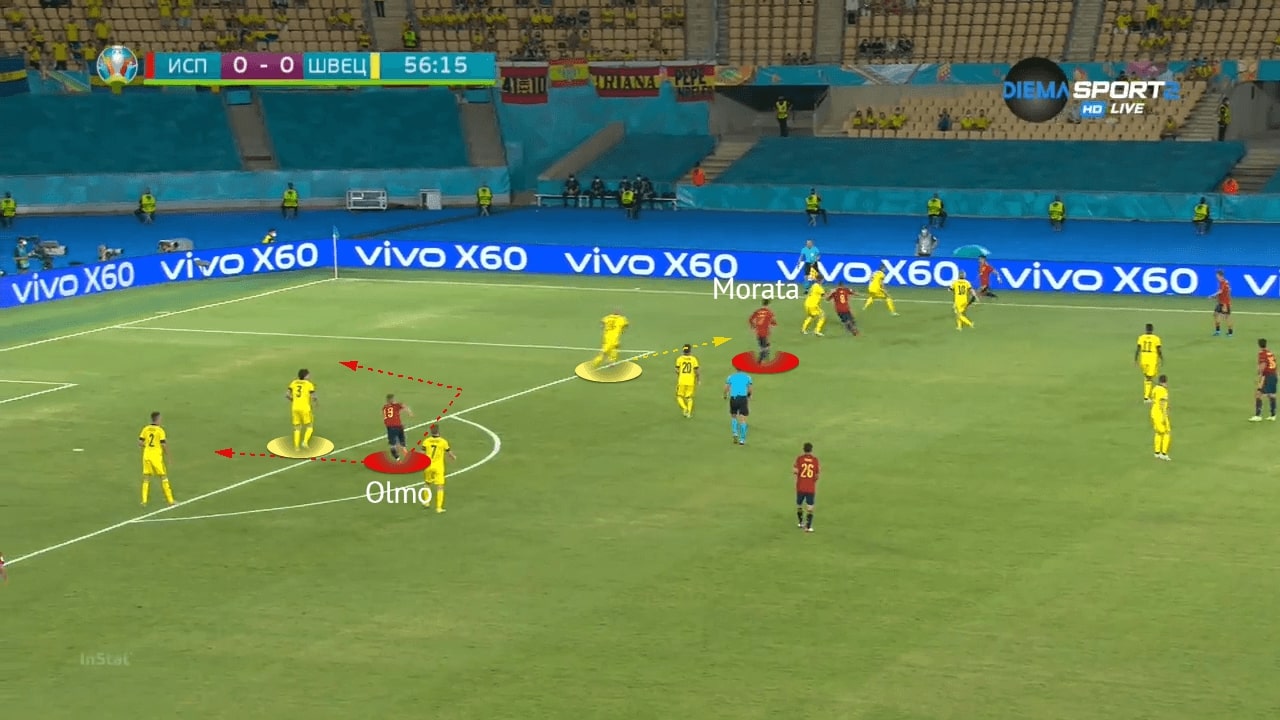 Here, Morata pulled Danielson out wide through his movement out wide, and Olmo immediately exploited this by coming infield and making a run into the central spaces around Lindelöf. However, the attack petered out due to poor passing on the flanks, and this continued to be an issue for Spain throughout the match.

Spain also improved their attempts to pull the Swedish midfielders out of position through their movement. Here, Pedri delays the pass by taking one more touch – this attracts Olsson towards him, creating the space for Rodri to run into.

This also raises the question of whether the Manchester City man is the player to attack these spaces between the lines, especially with Thiago and Fabian Ruiz on the bench to provide a much better option for these scenarios, and in a broader context, matches against sides that will sit deep. 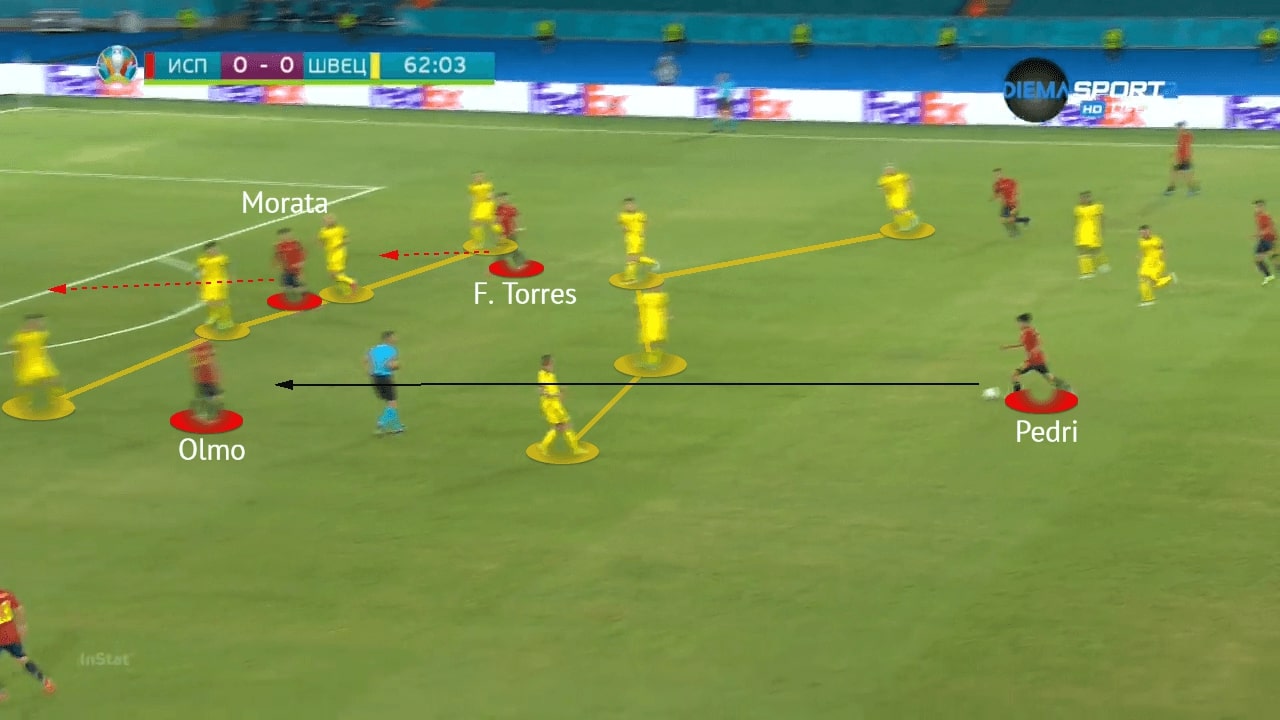 This is another example of the better movement from Spain in the second half. Pedri has managed to draw out the Swedish midfield line, while Olmo has positioned himself cleverly to receive in the half-space, with Alba providing the width on the left. This is also one of the few occasions where both Morata and Ferran Torres are threatening the space in behind with their runs, forcing the Swedish backline to retreat and therefore creating the space for Olmo to receive. 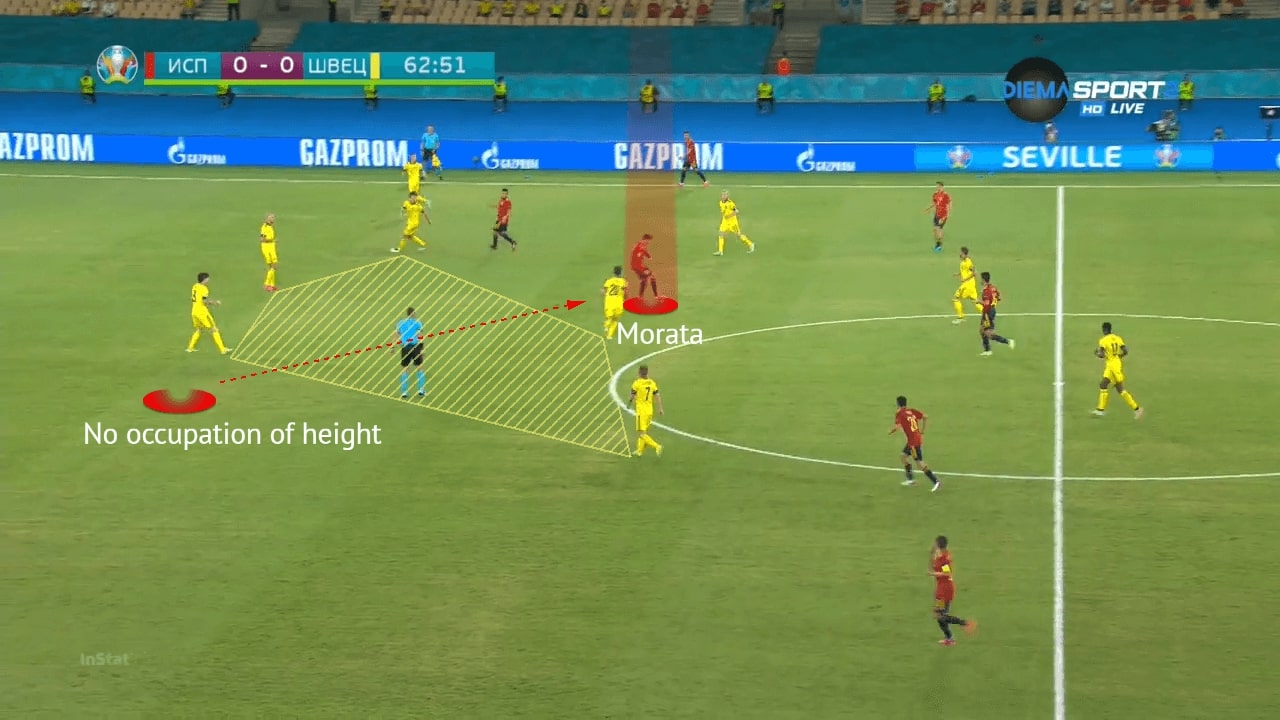 However, there were still quite a few problems with Spain’s structure, and Morata was a notable repeat culprit. He kept dropping deep to receive possession, and as the image shows, this meant that Spain often had no attacking depth. Sweden would have been quite comfortable allowing Morata to move into midfield to receive the ball, with both Danielson and Lindelöf staying in position and not following the Juventus striker. 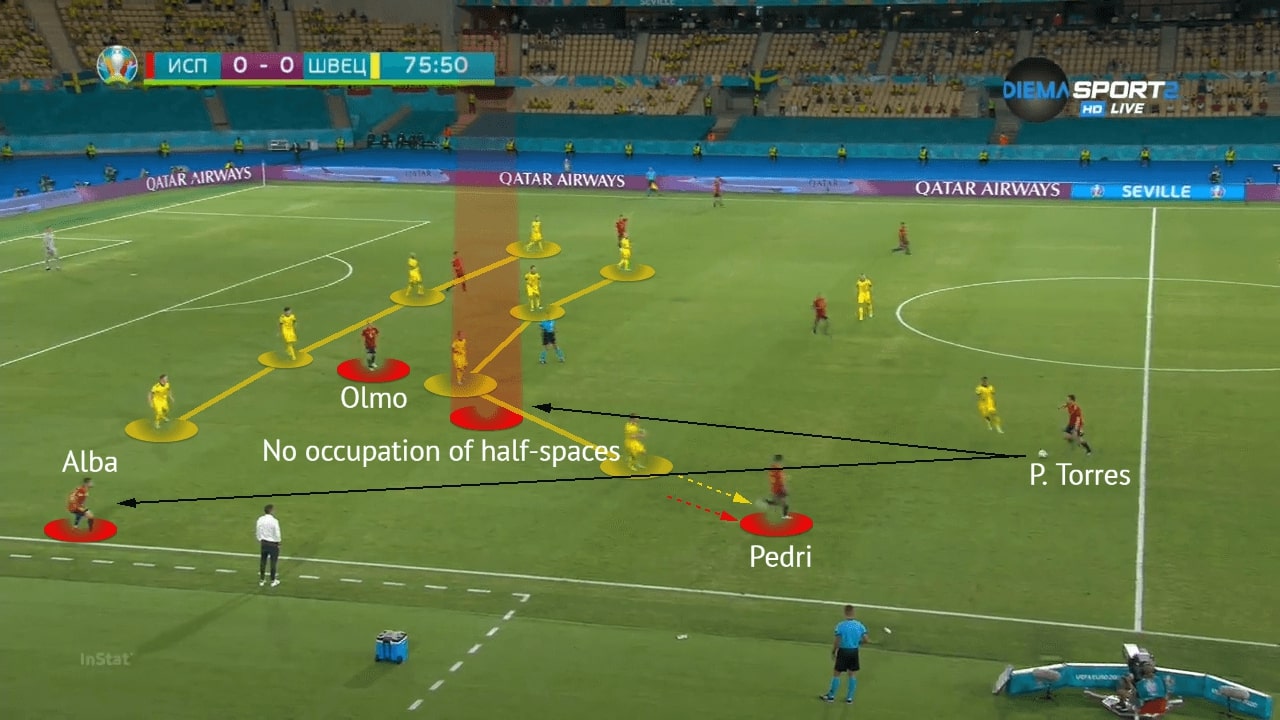 Enrique did make changes to try and improve things, with Ruiz, Gerard Moreno and Mikel Oyarzabal all being introduced. However, Spain were still quite sloppy at times, and their chance creation was more down to individual moments and quality than their positional structure.

This is an example which shows their poor positioning – Pedri’s movement has dragged the Swedish winger towards him, but no Spanish player drops to offer Pau Torres a passing option. Olmo stays in the Swedish midfielder’s cover shadow, which gives the Villarreal centre-back only one diagonal passing option in Alba.

Despite being tipped as the favourite and having a very talented group of players, Spain will be disappointed with their performance in the first game. Enrique may still try other players such as Ruiz and Thiago in midfield, but was one of the best Spanish players on the night – the La Liga winner made good runs to attack the penalty area in this game. Spain will definitely need to improve some aspects of their positional play quickly if they are to break down deep blocks at EURO 2020, and we will be looking forward to their next match to see Enrique’s tactics and approach.