EURO 2020 Preview: Ukraine need to start this player to shore up their defence versus Sweden if they want to win, here’s why – tactical analysis

Ukraine make it into the round of 16 of the Euros for the first time in their history. In the luckiest ‘out of their own hands’ way, Andriy Shevchenko’s side finished third in their group, but thanks to their goals scored, they are through to the knockouts. Good thing too, if they had finished second in their group, they had Italy, the tournament’s brightest team in the group stages, waiting for them.

Instead, Ukraine will face Sweden in Glasgow on Tuesday 29th June, so they do have time to rest and prepare. It was their goal scored that have got them this far, but against Sweden, they must improve on their leaky defence with any hopes of making the quarter-finals. Shevchenko’s tactics have to be right, but more importantly, his team selection must be as well.

In this tactical analysis, we are going to look at why their victory against North Macedonia was their only convincing win thus far, who needs to start versus Sweden, and how they can balance attack and defence to a convincing degree.

If one thing was clear from the Austra match, it was that Ukraine look much better with Taras Stepanenko in the side. His screening in front of the backline provides a solid platform to build from, and it allows Oleksandr Zinchenko and Ruslan Malinovskiy agency to roam forward without worry that there is insufficient protection behind them. This is not to say Serhiy Sydorchuk is a poor defensive-midfielder, but the drop off in quality between himself and Stepanenko is significant.

Sydorchuk does not have the mobility or reading of the game of a Stepanenko, which is fundamentally required of a #6 at this level of football. In the Austria game, Sydorchuk was exposed against the likes of Bundesliga star Marcel Sabitzer, Christoph Baumgartner, and Konrad Laimer. He struggled to track their movements off the ball and was punished for it on a few occasions in the match. 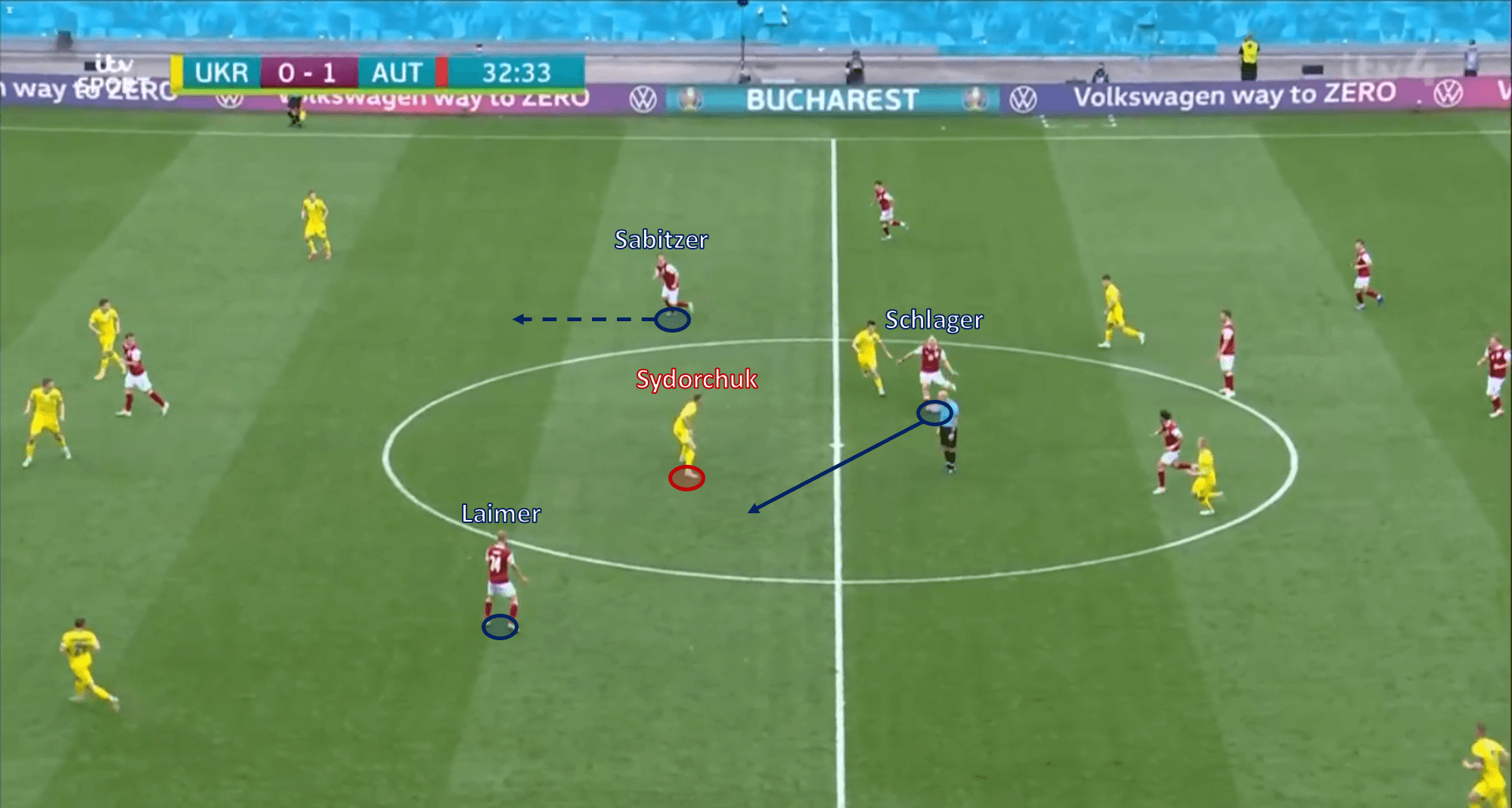 Sydorchuk here is almost a sitting duck. Both Laimer and Sabtizer moving around him makes it easy for Xaver Schlager to begin the passing triangle. 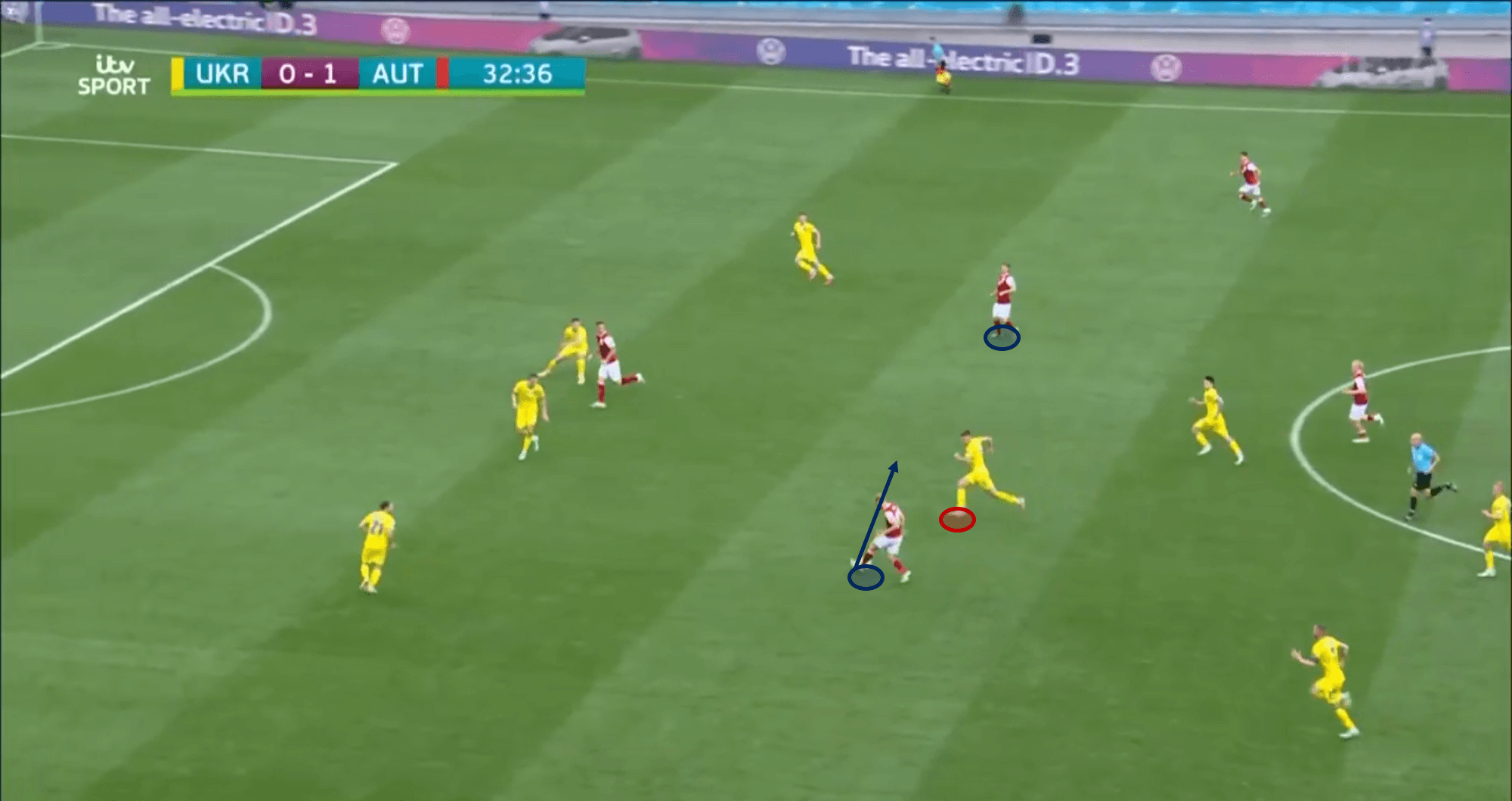 Sydorchuk tracks back while Laimer can lay the ball across to Sabitzer.

As we saw against North Macedonia, Stepanenko brings a level of stability that ultimately sends confidence right through the entire side. In Shevchenko’s 4-3-3 formation, his deepest midfielder acts as a conduit between defence and attack. Although Stepanenko does not possess a fantastic passing range, his short-medium passing is consistent and useful – he gets the ball to talented attackers quickly, which is incredibly valuable for Ukraine in the transition.

Stepanenko has a defensive awareness which is intangible but invaluable to the team. His reading of the game allows him to spot attacking rotations before they happen, and he can get into the spaces where he can attempt to prevent these moments. He knows when to aggressively press his opponent and when to stay back and cover the gaps in the defence, depending on which side of the pitch the ball is on too. 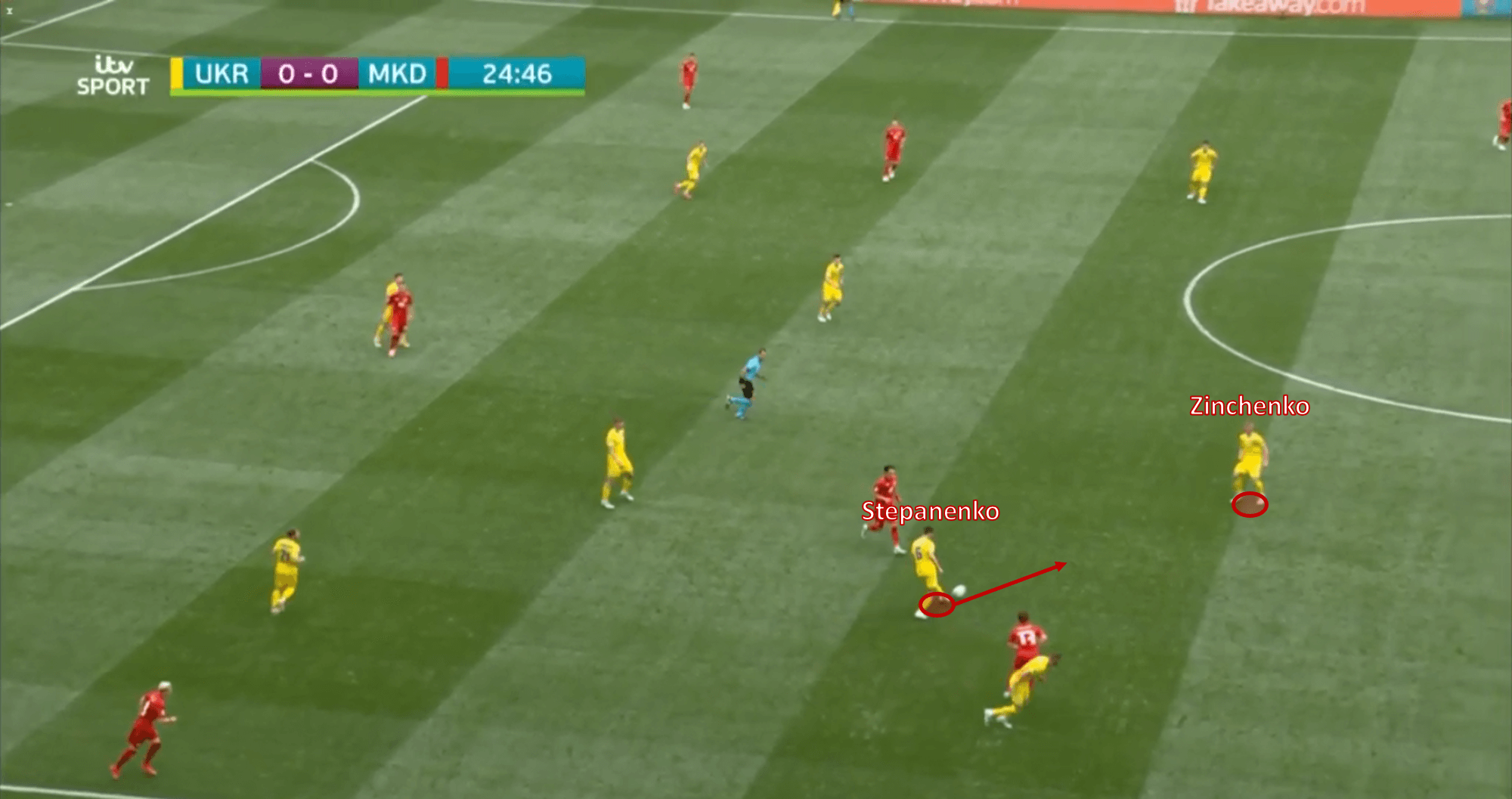 Short simple passes like the one in the example above are useful for keeping the tempo high in Ukraine’s build-up play. 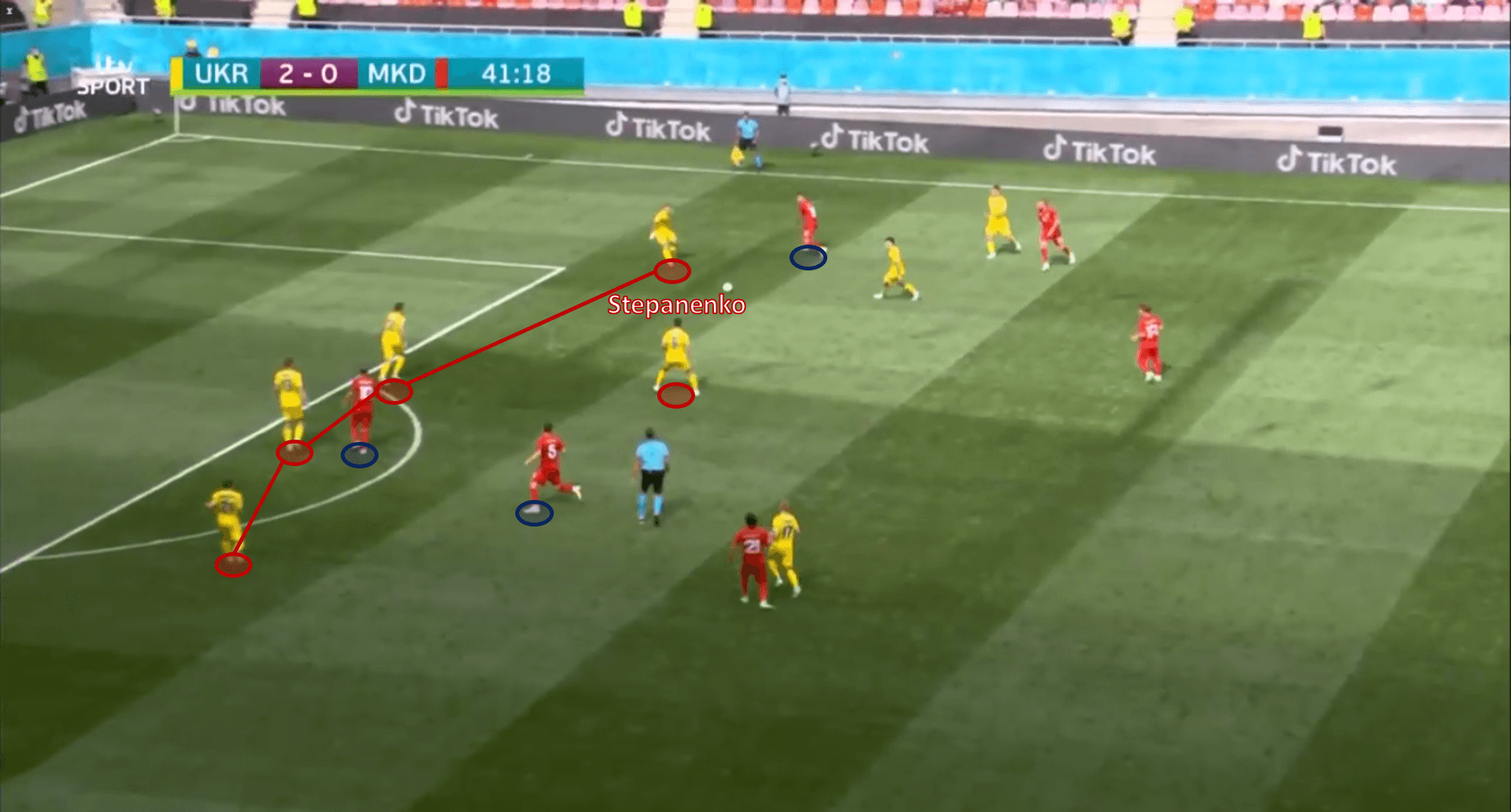 Here, Stepanenko maintains his position in front of the back four, blocking off the passing lane to both forwards in a central position.

This is not to say Stepanenko is a free pass to victory or is the perfect defensive midfielder, that is not the case. There are good reasons he has remained in Ukraine his entire professional career. However, he is a step above Sydorchuk and has always played at a top-level for the Yellow and Blues. His inclusion from the start will improve Ukraine’s likelihood to win tremendously.

Yaremchuk and Yarmolenko to continue their strong form

Going forward, especially in the first two games, Ukraine’s two forwards have been in strong form, hitting the ground running at the tournament. Heading into the tournament, it was expected that Serie A star Malinovskiy would be the fulcrum of this side in an attacking sense, but that much has not been true. Instead, Roman Yaremchuk and West Ham forward Andriy Yarmolenko’s strong pressing game and quality on the ball has been enough for Ukraine to score five times in three games so far. 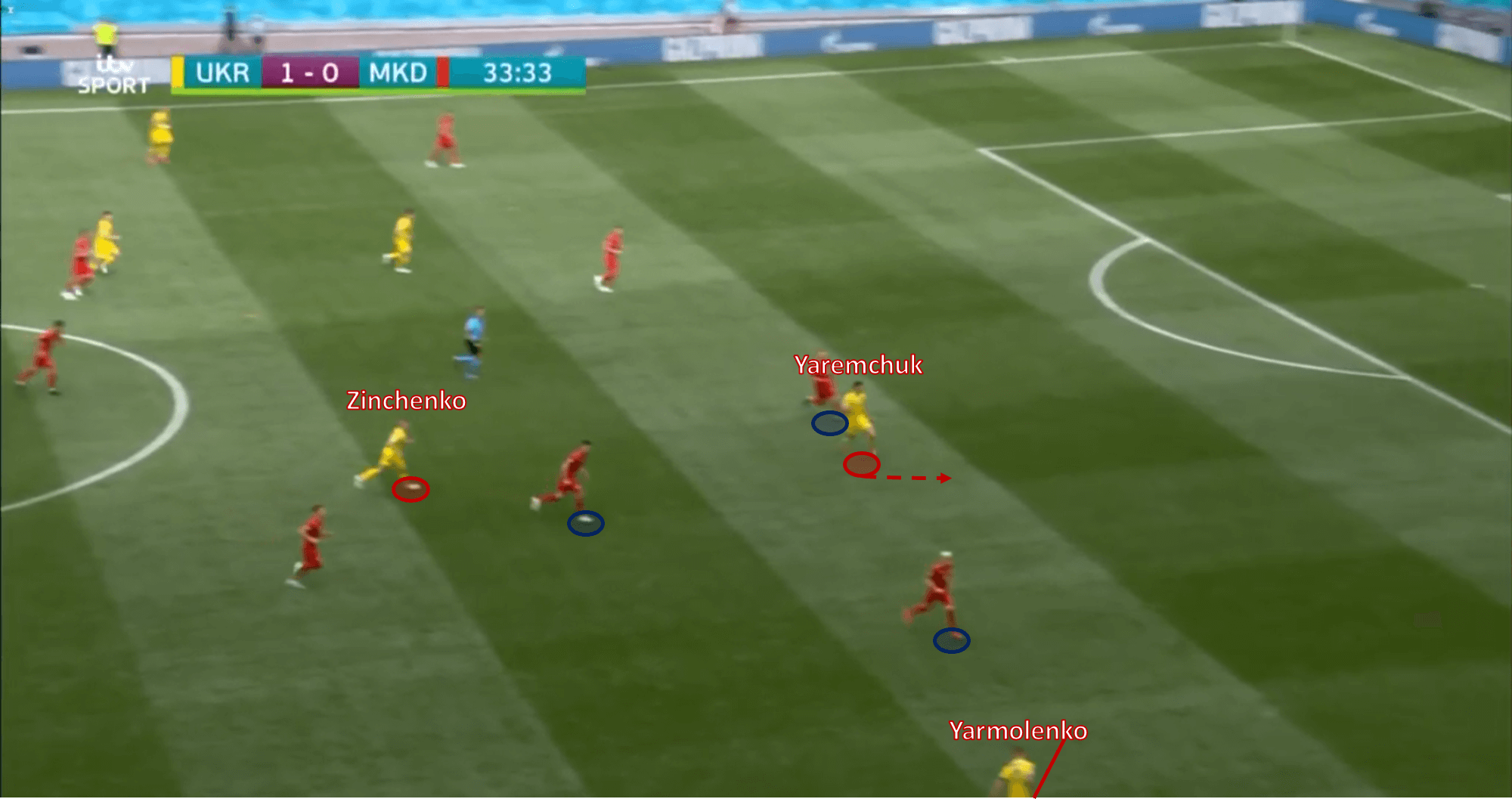 Zinchenko driving up the field here passes the ball to Yarmolenko out wide who plays the one-touch pass through to Yaremchuk. 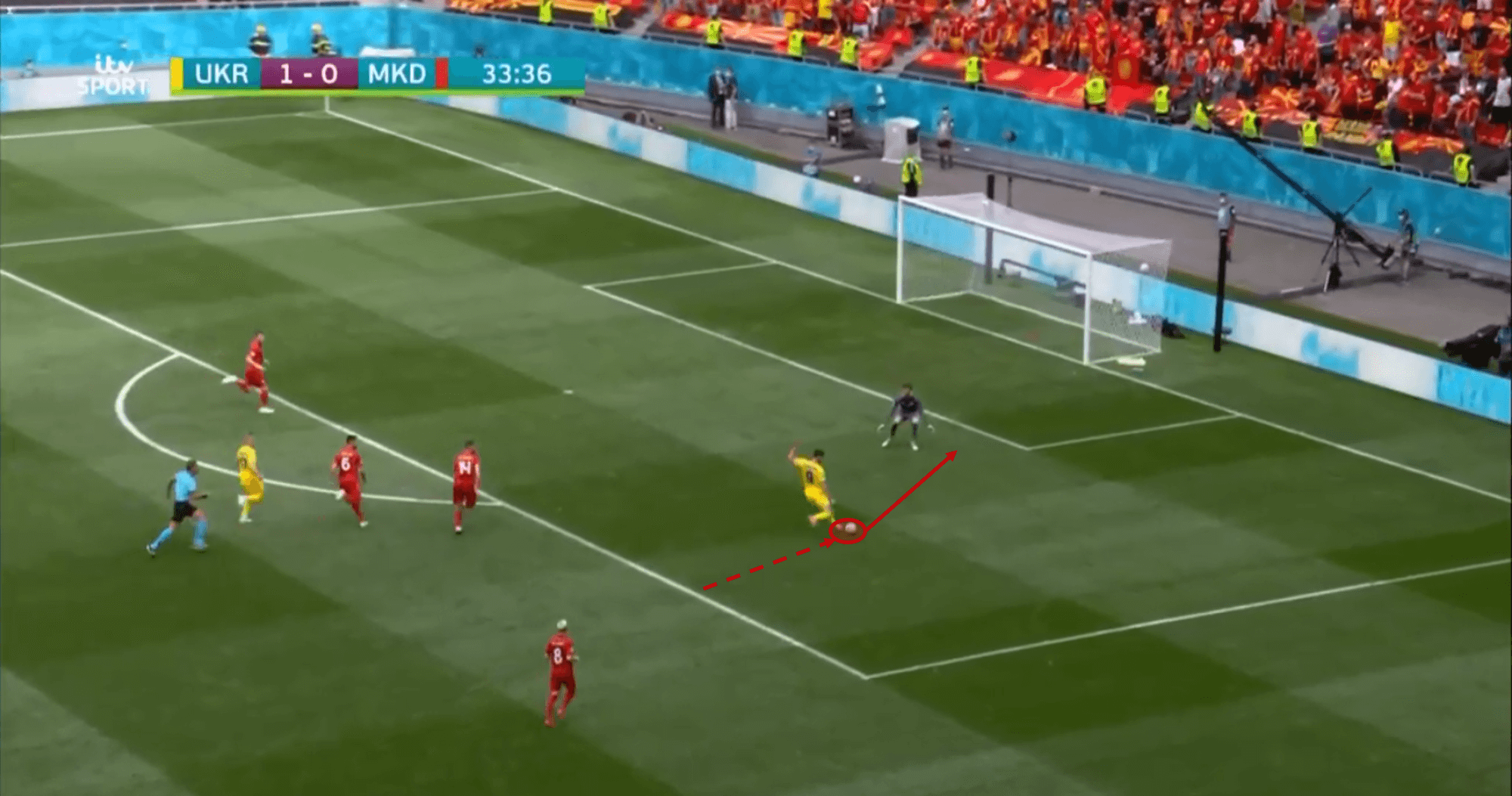 Yaremchuk’s run was coolly timed – as was his finish into the bottom right corner.

In the tournament so far, they have managed to link up intelligently, and use their movement to their advantage, getting a foot or a head to the end of many crosses by their teammates. The left-winger, Oleksandr Zubkov or Malinovskiy, has largely been utilised to provide width in the attack, attempting to create overloads down the left with Oleksandr Zinchenko and Vitalyi Mykolenko as the advanced full-back.

Yaremchuk has been especially impressive in the build-up. His runs in behind do not always result in anything more than making the opposition defence consider his positioning, but they are always dangerous. He regularly occupies spaces in the final third where can lay off the ball or drop deep and lay on a through pass to an attacking teammate, aiding ball progression. 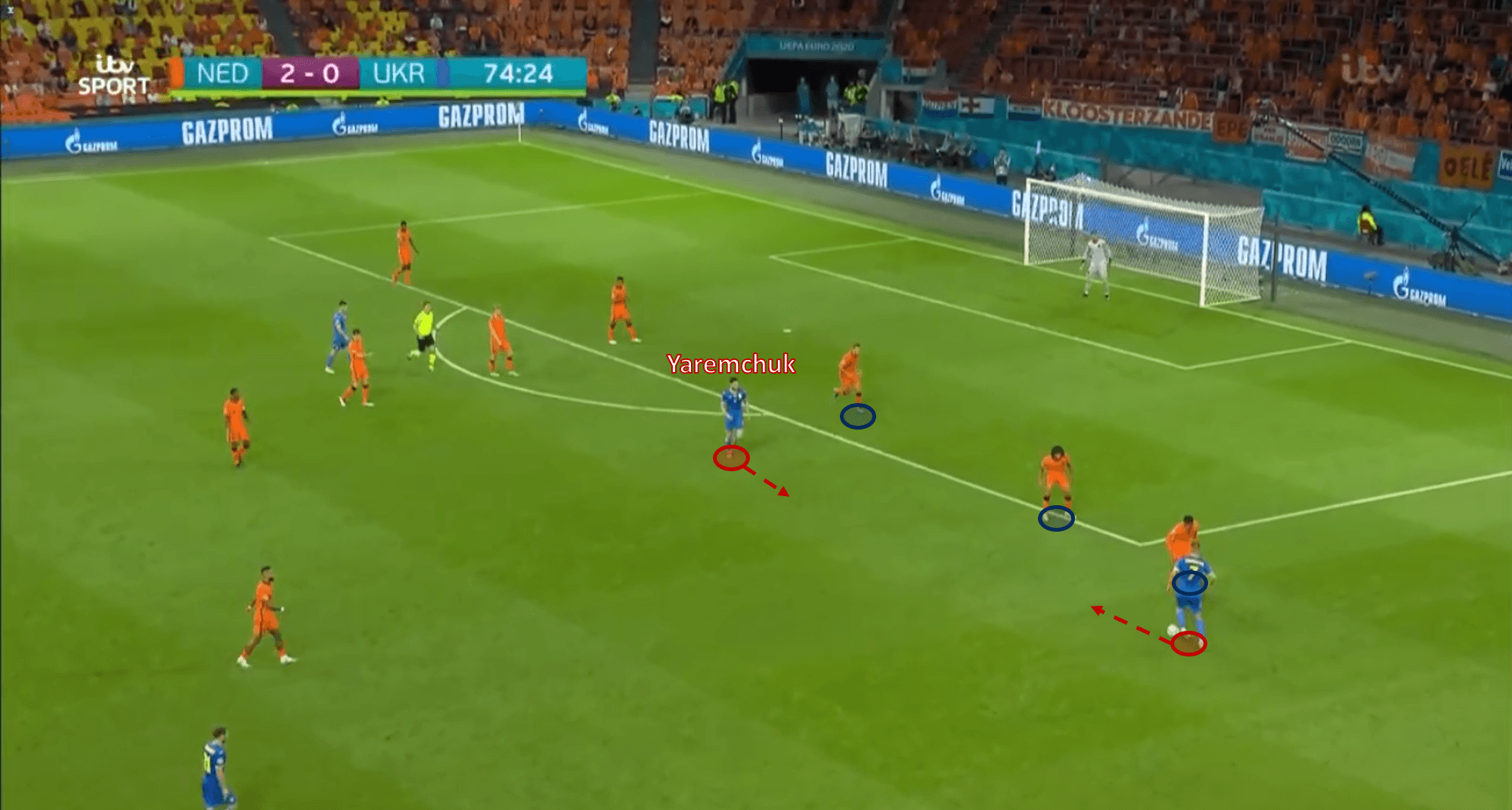 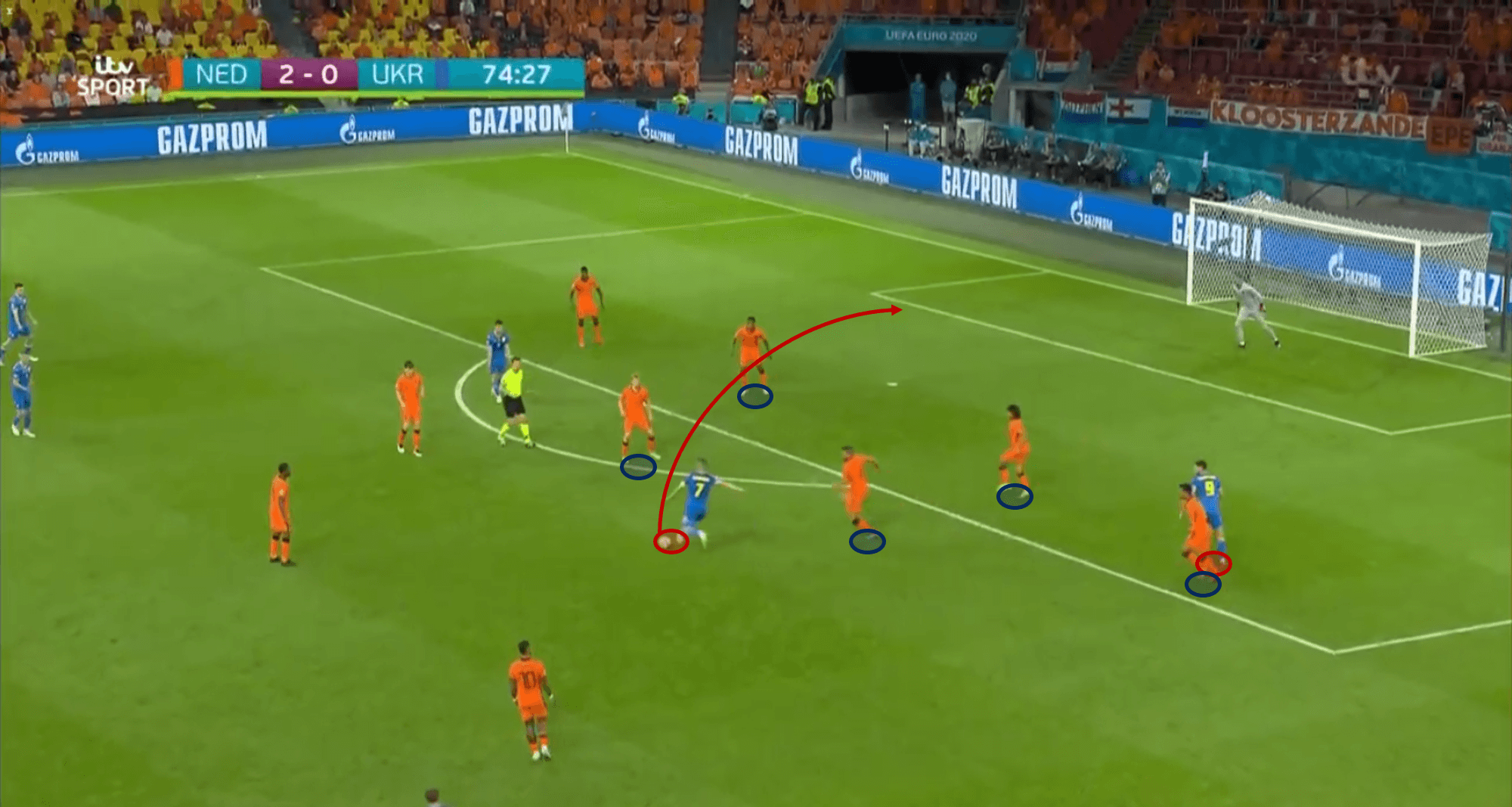 Yarmolenko then proceeds to cannon the ball into the upper left corner.

Yarmolenko on the other hand has been Ukraine’s consistent threat at the end of their attacks. His height as a 6’2” winger has been particularly useful. At times, going forward Ukraine have lacked attacking ideas and have relied on a deep cross from Mykolenko at left-back, often targeting Yarmolenko towards the far post, who is typically marked by an opposing full-back, usually smaller than him in stature.

Ukraine should play with more width

Ukraine faces a Sweden team who did top their group, drawing with Spain, beating Slovakia and Poland in a dramatic last-match encounter. They are a team who look fairly regimented defensively, conceding twice, both goals conceded in the last game versus Poland via a very good Polish striker named Robert. They will take some beating, but if Ukraine were to play with a bit more width than they currently have been, it could stretch this Swedish defence.

Utilising Mykolenko will be vital in this case. Of the two full-backs for Ukraine, Mykolenko is much better going forward than his compatriot Oleksandr Karavaev. If Mykolenko is utilised on the left with Zubkov ahead of him also stretching the play, the closest central-midfielder could advance forward to help create passing triangles in the final third, enabling Mykolenko access into dangerous crossing areas. 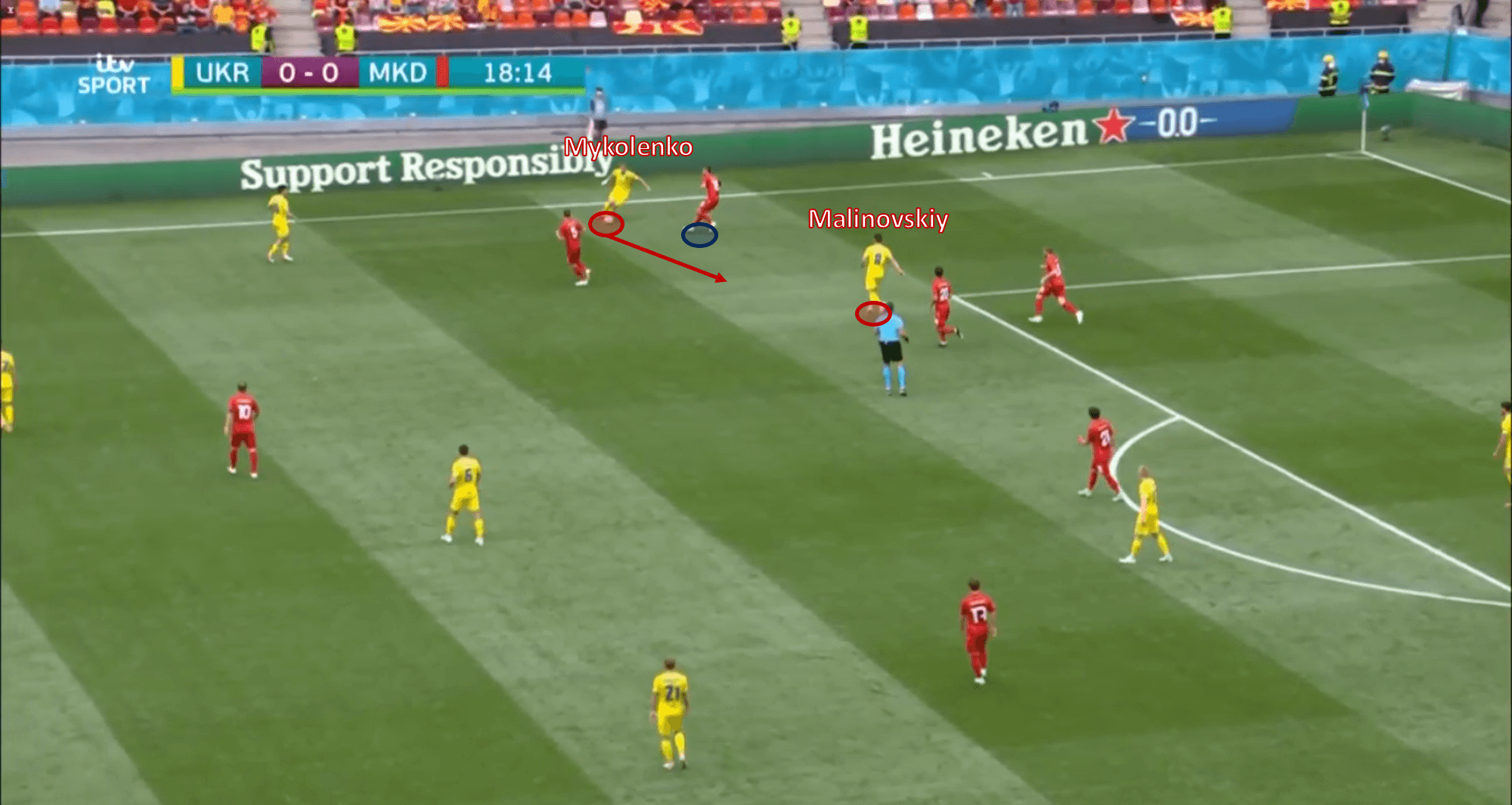 Mykolenko here has the ball in a wide-left zone, passing the ball inside to Malinovskiy. 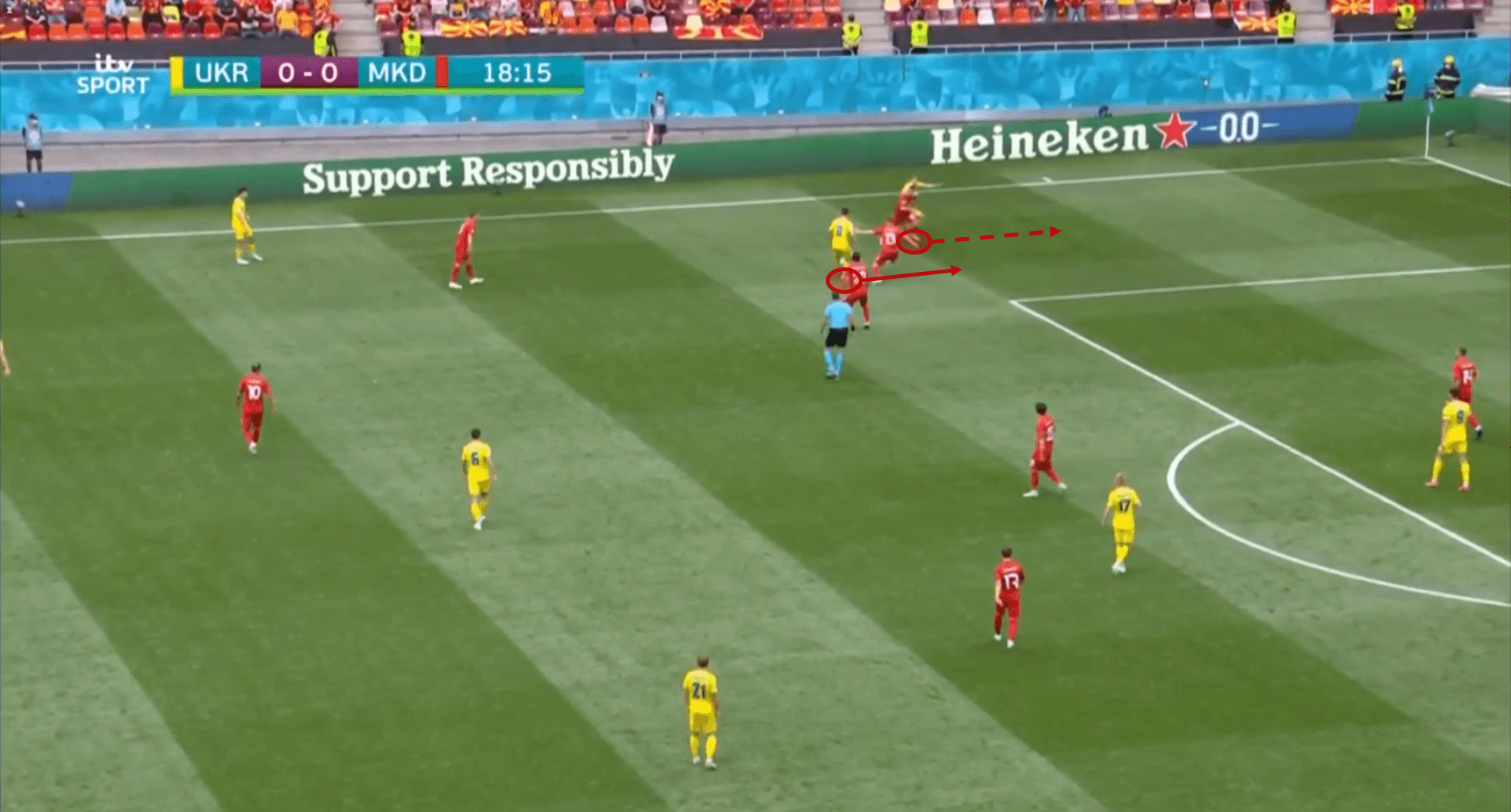 The one-two was unsuccessful this time, but we can see the type of play that could come off against Sweden.

A balance will have to be found, of course. This is still a dangerous Sweden team at times, especially down the left where Emil Forsberg operates. He can combine with left-sided striker Alexander Isak, whose burgeoning reputation has been accompanied by stellar performances thus far at the tournament. Down the right, Karavaev could form part of a back three for Ukraine to battle this strength down the left.

He would be accompanying Ilya Zabarnyi and Mykola Matvienko, who have both struggled at times in this tournament so far but adding extra cover could help them with their defensive positioning. While Karavaev could step out of the defensive line to pressure the ball-carrier, the two Ukraine centre-backs can man-mark the remaining forwards out of the game, forcing Sweden to pass sideways/backwards in and around the penalty area. 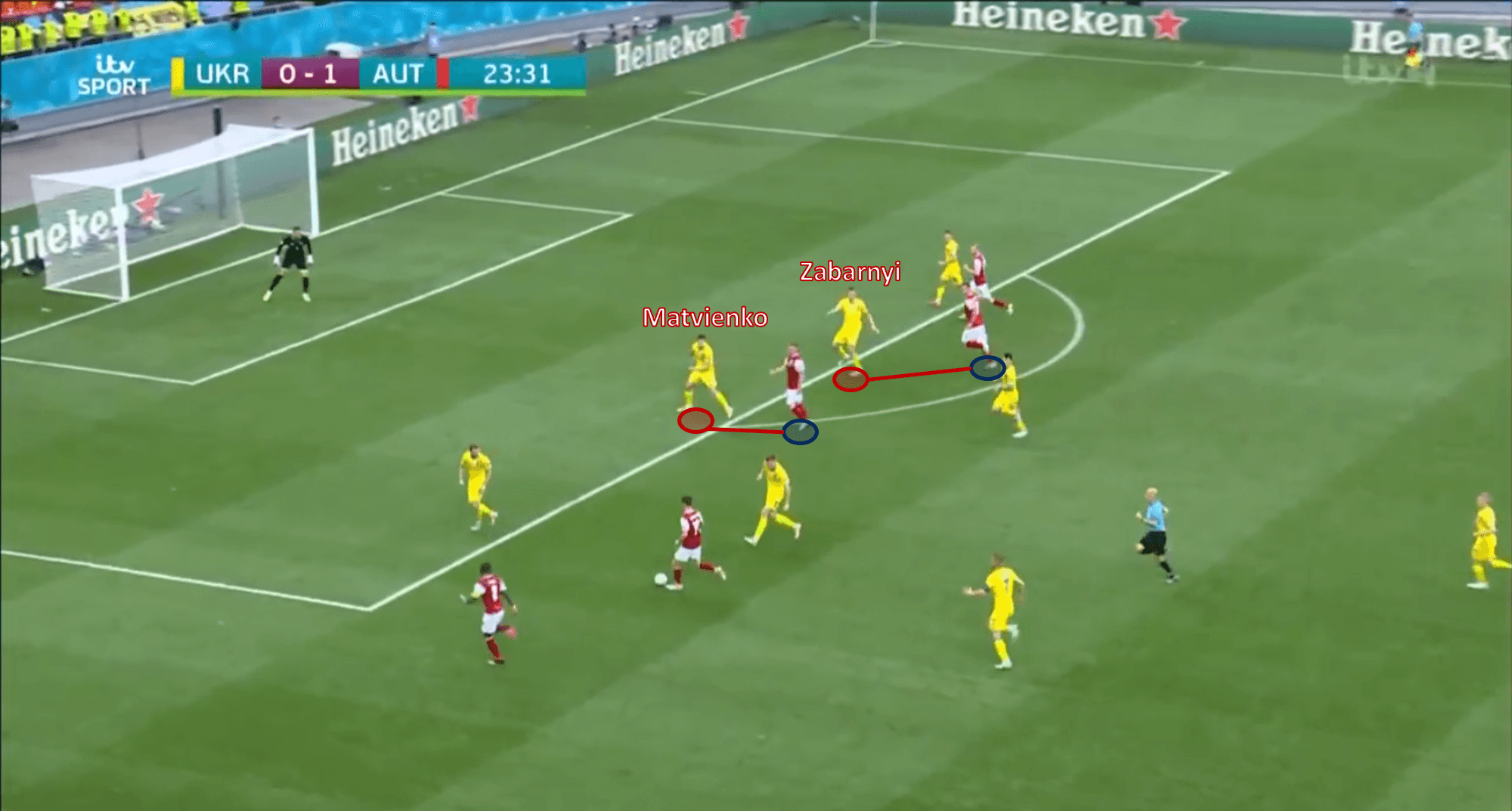 Here we have an example of Matvienko and Zabarnyi sticking close to their targets, maintain a steady back four. 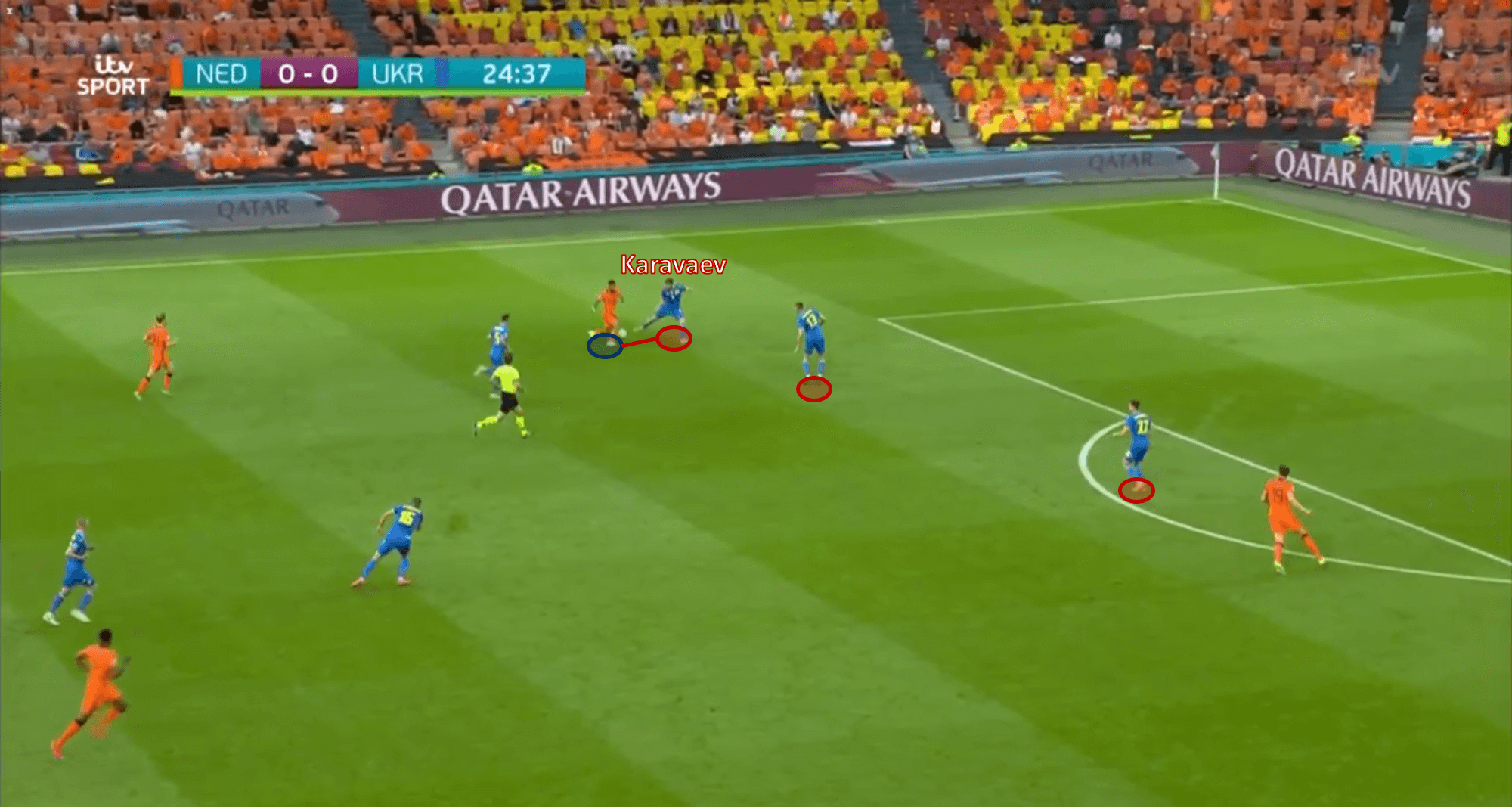 As part of the back three, Karavaev can be the player to aggressively press their opponent, as seen in the example above.

The main purpose, however, of playing wide would be to get crosses into the box for Ukraine’s aerially dominant forwards. They will be facing Manchester United defender Victor Lindelöf and Marcus Danielson, neither of whom are excellent in an aerial sense. It should not be Ukraine’s only method of chance creation, but it could be a fruitful one if a good volume of crosses are sent into the area.

Sweden heads into this game as favourites, but in a one-game display, anything can happen, the worse team can win with a shred of luck. Going forward, Sweden did not excite their fans until the final matchday in the group stage, but in tournament football, defensive dominance is usually preferred. They are tough to break down, as they are a team that clearly work as one cohesive unit. If I were to put my name to a prediction, I would call this a 1-0 to Sweden, but hopefully, Shevchenko’s men can pull through.