How did wide wingers cause the Etihad chaos?

Another year for Pep Guardiola’s Manchester City, another Champions League quarter-final second leg at home against an English side having failed to score an away goal. Tottenham might have only won the first leg 1-0 but the clean sheet they took with them to the Etihad meant that if they scored once, City would need three. In this tactical analysis, we will look at the tactics used by both Guardiola and Mauricio Pochettino in an absolute classic at the Etihad. 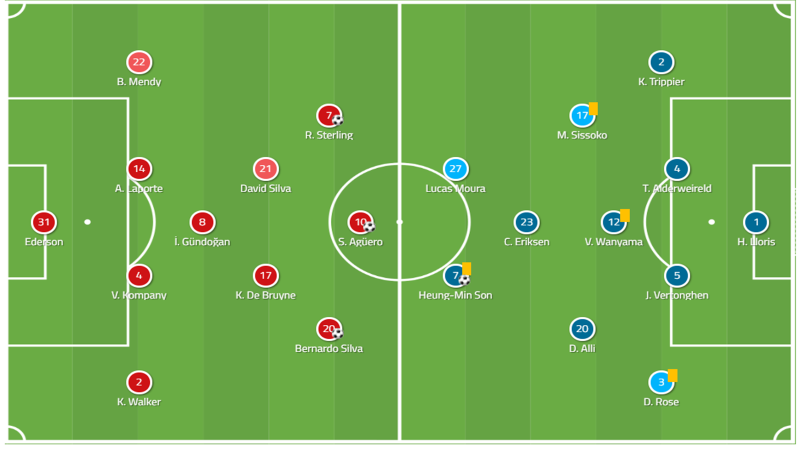 Last season when City found themselves trailing 3-0 from the first leg at Anfield, Guardiola decided to play with three at the back in a more attacking approach. However, due to City being exposed that night, Guardiola went for four at the back this time around, with pacey full-backs Kyle Walker and Benjamin Mendy playing on either side.

They were both able to help City in defence but bomb on to create width in attack like we have seen all season. Also crucial to width were Raheem Sterling and Bernardo Silva, who played either side of Sergio Agüero in a front three.

A more defensive Spurs played three midfielders in Moussa Sissoko, Victor Wanyama and Dele Alli in front of a back four. They knew that a draw would send them through to the semi-final so looked to stay compact in this formation, which we will touch on later. However, Pochettino decided to play Heung-min Son and Lucas Moura up front whose pace would be vital for the counter-attack.

Pochettino would have certainly known that City were going to throw the kitchen sink at Spurs. You can see from the early encounters that Pochettino wanted to soak up the Manchester City pressure and counter through the pace of Son and Lucas in behind the City defence.

The above picture shows how compact Spurs were. They did not go chasing the ball when City were in possession but instead waited for a trigger to go and press. This made it really hard for City to play through Spurs.

What you can notice from the above picture is Spurs were almost too compact, which left space on the opposite side of the pitch. Against many other teams, this would not really be an issue. But Manchester City are the masters at using this space, one of the main reasons Sterling has been so successful this season.

The above picture shows the pattern of play that you will see from the City wingers. This example uses the right winger, so Bernardo Silva. Spurs make it compact on the left-hand side of the pitch, but Silva stays out wide. Spurs don’t mark Silva as this would create gaps in their compact shape.

When Silva is free, he makes a run centrally into the box. Therefore, when he receives the ball from Kevin De Bruyne or David Silva he is in a position where he can threaten the opposition goal. A comparison of Manchester City’s pass network and Tottenham’s shows the width and compactness of either side.

All three City goals, which came in the first half, came from a pattern of play similar to the one above. For the first goal, Sterling stays well out wide away from Spurs’ compact shape. When he receives the ball from De Bruyne he has space and time to shift the ball onto his right foot and finish superbly to equalise the tie on aggregate.

City’s second goal which pulled City back into the tie after two goals from Son was very similar to the example above. Agüero played the ball from the compact area in which he was into the free space of Bernardo Silva who was running centrally into the penalty area. When he received the ball, he took a great chance to score after a deflection off Danny Rose.

City’s third goal was also similar but this time the ball was played across the face of goal from De Bruyne. But it was how Sterling delayed his run which made the goal look so easy. He does not run in straight away but stays deep and wide to begin with. This turns Kieran Trippier’s attention to David Silva who is in more of a dangerous situation.

This then allows Sterling to get on the blind side of Trippier so the right-back is unaware of his compatriot’s run. As a result, Trippier does not get himself in the right position to prevent Sterling from having a shot on goal.

City had 2.09 xG but these three chances alone added up to 0.53 xG, so despite having 19 shots on goal, 25% of their xG came from three chances through the runs of their wingers showing how effective this pattern of play was to Guardiola’s side. Although it worked superbly for City in attack, defensively they were nowhere near as good. This then allowed Pochettino’s first-half tactics to work with two crucial away goals for Tottenham.

Firstly, the City press was rushed and not up to the City standard that we are used to seeing. Below we can see the press of Bernardo Silva on Sissoko, but he is pressing on his own and not as a unit. This leaves Danny Rose free and Spurs eventually outplay the press. De Bruyne could have restricted Rose’s space, giving Jan Vertonghen fewer passing options.

Also, City had to be better at cutting out passing lines. This was a problem in the lead up to Son’s goal. There was no one cutting off the pass between Lucas and Alli so the latter could receive the ball on the turn and play in Son. Aymeric Laporte tried to block the shot on the turn but it fell straight into the path of Son who put Spurs back in front on aggregate.

Before we mentioned about the shape of Spurs and them waiting for a trigger from City. This came from a poor touch by Laporte which was capitalised on by Lucas. When Lucas won the ball there was plenty of space in behind the City defence to attack, but also the pace of Son to his left. Eriksen also makes a support run so he can play it into Son who can score. The pace of the two strikers was vital for Spurs at this initiated the counter-attack which caused problems for City.

However, the game settled down later after Sterling’s goal. City could not risk conceding yet another away goal. Therefore, City then decided to be more compact and the storm of the first 20 minutes had calmed down before half time.

A similar scenario happened in the second half with both teams having chances. However, it all changed when Agüero gave City the lead in the tie for the first time after 58 minutes. It was the space that Silva and Sterling provided which allowed De Bruyne to find passing lines in between Spurs.

Below you can see De Bruyne spot a gap in the Spurs defence. The gap has probably been caused by the width of City. Therefore, in this gap, De Bruyne can create a passing line for İlkay Gündoğan to play the ball into him. As he is aware of the space, he can pick the ball up with his back foot and drive at the Spurs defence.

When De Bruyne gets the ball in a dangerous position his teammates create options for him. Sterling is available yet again on the wing, but it is the run of Agüero the De Bruyne picks out. He makes a fantastic run on the outside of Vertonghen for De Bruyne to find his back foot, so Agüero is perfectly positioned to strike the ball first time and put City ahead.

In probably the most dramatic game of the season, VAR came to the rescue for Spurs twice. First was Fernando Llorente’s winner for Spurs and his second in this Champions League campaign. It was a great move from the back to front post to lose his marker Mendy. The ball bounced off him awkwardly hitting his arm as it went into the back of the net but VAR judged it to be a goal.

There was further controversy when Sterling thought he had booked his side a semi-final spot. Agüero, who assisted the goal, was judged to be offside through VAR. Spurs will now play the very exciting Ajax who are fresh from knocking out Juventus in the other semi-final. These two sides will fight again on Saturday back at the Etihad as City go head to head with Liverpool in the title race. If that is anything like this one, we are in for a treat.