Boca Juniors have continued to underwhelm under the tutelage of Gustavo Alfaro with a devastating loss against Union de Santa Fe in his first game. They went on to beat Aldosivi but were probably a little lucky with the 13-9 shot count favouring their opponnents who also boasted five shots on target.

The game against Newell’s Old Boys was definitely a must-win. Although Boca didn’t, there were some very positive signs for the team with some interesting and positive tactical tweaks throughout the game that turned the tide for the away team. A win for Newell’s was also a priority here with The Lepers languishing down in 13th place in the Superliga. This match analysis will look at the tactics employed by both teams. 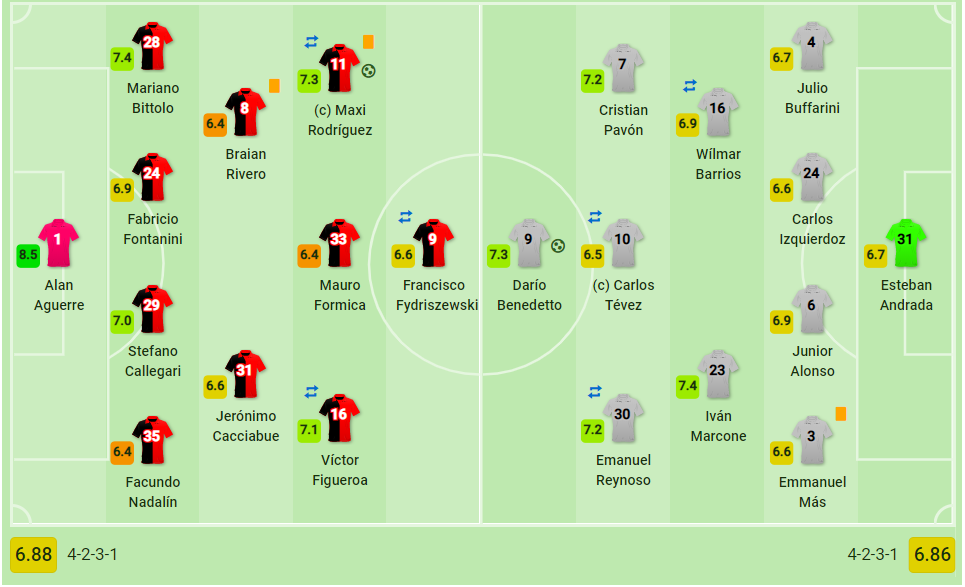 There were some major changes for Boca from the Aldosivi game with Pavon, Barrios, Tevez, Benedetto, Mas and Goltz coming into the lineup. Agustin Almendra was still missing through injury. Both teams lined up in a 4-2-3-1 and sent out what seemed like fairly attacking teams.

The immediate pattern in Boca’s pressing which stood out was their tendency to press with three players when the opposition had possession on the wing. When coming out of the defensive third on the right, Mas, Marcone and Reynoso pressed quite aggressively. It was effective with dispossessions occurring frequently.

Mas pushed up and left his space and Marcone tucked in. The opposition tried to exploit the space vacated but the press in these instances was so aggressive the runner usually couldn’t see his teammate in the right half-space.

Marcone and Barrios were very interesting in their pressing patterns. They were very dynamic and communicated very well. They were both tasked with pressing the middle but also looked to track diagonal opposition runs into the vacated spaces when the full-backs pressed.

In the above example, you can see Barrios roaming from the left-side central midfield space into the full-back area due to Mas’ commitment higher up the pitch. When the ball circulated onto the other side of the pitch, Mas and Barrios switched positions again.

There were times when the pressers weren’t scanning and didn’t apply cover shadow. There were also moments when Newell’s exploited this by finding the free man caused by the overload.

Boca began hitting the ball long early on in the match. The centre-backs were looking for Pavon or Benedetto. For the most part, this strategy was ineffective due to Newell’s good pressure on the receiver. Boca stopped doing this as there was no space in the second and third line due to the anticipation of the long ball.

The Boca midfield tried lots of different combinations. Marcone and Barrios were very fluid and they interchanged positions continually to destabilise both Newell’s attack and defence. They were both man-marked in ball possession, which probably explains why they were so dynamic in their movement. They employed the ‘one high, one low’ system. Both players tried to destabilise Newell’s mid-block and exploit the man marking in the middle of the pitch.

Eventually, Boca started playing out from the back a bit more. The centre-backs started circulating the ball and inviting the press. They would then look to bypass the midfield space and try and stretch the first and second line to create final third entries. This was effective and Boca started to create some good chances. Benedetto came into the game and was effective with his layoffs.

When Newell’s did get into the final third, Boca went into a bank of four. Even though they were defending in two banks of four, they weren’t entirely compact and this created problems. When Newell’s had possession they would often try and get the ball wide and look to create overloads. At times, it was effective and looked quite dangerous when they moved the ball beyond the last line.

The Boca defenders often committed to challenges when they probably didn’t need to and were dragged out of position. It was this type of behavior that gifted Newell’s their goal. Barrios committed to the challenge and was beaten in a one-on-one situation. He left his space and gave Newell’s a dangerous 3v3 situation in the final third. The Boca centre-backs defended crosses quite poorly with some poor execution gifting Newell’s decent chances.

Newell’s attack consisted of mostly attempted overloads on the left wing and then switching the ball. Once this had been completed, the receiver would try and loft the ball to the opposite wing. There was a lot of wing play leading up to the goal.

Newell’s attempted to stretch Boca’s back four to some extent. Both Boca full-backs remained quite compact when this happened which had an odd effect. Due to this positioning, the near-side winger had ample space to get the cross in.

Boca after the goal

Boca’s game plan didn’t particularly change much after the goal at first. The centre-backs circulated possession with Barrios and Marcone fluid in their movement, crossing over each other’s traditional spaces. The centre-backs then looked to find a third man: the free man very close to the edge of the half space.

The receiver in turn looked to bounce play and continue the move into the final third. The centre-backs also tried long diagonals to Pavon. Boca were playing well and finding pockets of space, particularly in the right half-space where Benedetto often came deep and looked to destabilise Newell’s shape.

As the game developed, the one noticeable difference was that once Boca moved the ball into the opposition half, they instigated triangulation play in the middle zone, between the half spaces. Benedetto continued to drop and attempt to drag his marker out of position.

This triangulation play shifted the focus to the middle lane and left space for Buffarini to receive and get behind the last line. Newell’s pressing was very ball orientated at this point and looked to block passing lanes. This was largely disorganised because it was in the middle of the pitch.

The central midfielders and number 10 didn’t seem to really know when and when not to press. It was a bit easier to defend against in the first half. Newell’s seemed prepared to defend the half-spaces: ball orientated pressing is very effective against that.

Newell’s in the second half

The home team were compact in defence and defended in two banks of four. When they regained possession (which was mostly in their own half) they looked to shift it to the wings and run with the ball into the final third. This mostly occurred down the right flank.

It was largely ineffective with Boca finding it easy to defend the wings using the sideline as that extra defender. At this stage of the game, the Boca full-backs were defending one-on-one as opposed to supporting play from Barrios or Marcone. This was probably because Boca were now focusing more on transition and ensuring they had numerical superiority after dispossessions.

Zarate was substituted for Reynoso on the hour mark. This made a big difference to Boca’s play. Once the ball moved into the final third, the Boca players – especially Campuzano – looked to hit it wide early. So instead of circulation in the middle, they began playing with a bit more pace and were looking to stretch the defence instead of containing it.

This pattern of play led to the goal. Zarate received the ball on the left wing from Campuzano, who showed great perception to break away from three opposition players before playing Zarate. Zarate then performed a perfect driven cross for Benedetto, whose movement for the goal was superb.

Boca were definitely unlucky in this game and deserved to win. It was great to see some positive signs from the team. Boca won the shot ratio and also created four big chances with three of those missed. They also managed to get nine shots away inside the 18-yard-box.

Former West Ham forward Mauro Zarate made a massive impact when coming on and was probably the best player on the field. Despite the result, Alfaro will look to build on some of the positives in attack in the coming weeks.