There is always a certain amount of intrigue surrounding the appointment of a new coach. This is especially true when that coach is appointed at a club like Roma, a giant of the Italian game who had been underperforming recently. Last season saw the highly experienced Claudio Ranieri given time at the helm as the powers that be at the club sought a coach who could move the club forward. In the summer the decision was made to appoint the Portuguese coach Paulo Fonseca, formerly of Shakhtar Donetsk in Ukraine.

Fonseca is a coach with a recognizable game model that he will look to implement at Roma but as with any other new appointment, this model will take time to fully embed. Indeed, they started the season with two consecutive draws, at home to Genoa and ‘away’ to city rivals Lazio.

Their opponents in this match, Sassuolo, are widely regarded as a more forward-thinking Italian club. They were one of the first in Italy to follow the lead of Juventus in building their own stadium. A move that will provide immediate financial benefits. They also recruit and trust young players whilst playing an attractive brand of football under their 40-year-old coach Roberto De Zerbi.

In this tactical analysis, we will examine the key tactical battles that led to Roma winning the match 4-2. 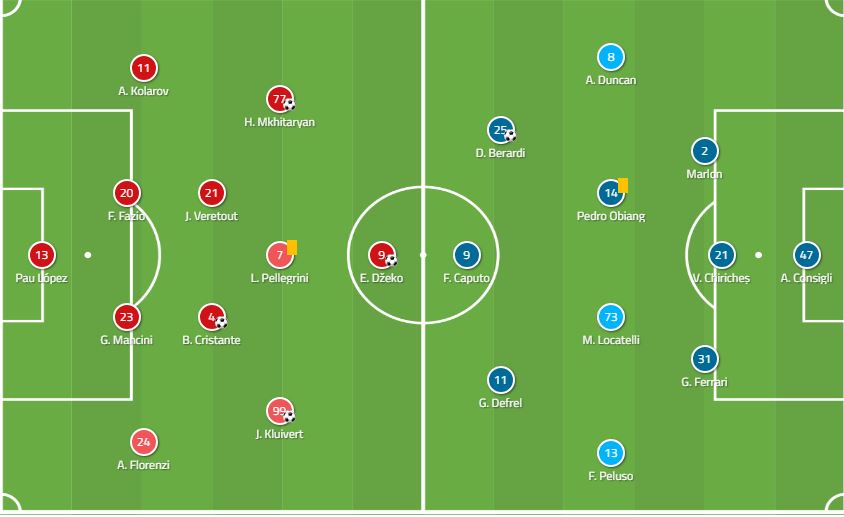 This match saw Roma line up in a 4-2-3-1 shape with their new Armenian signing Henrik Mkhitaryan on the left-hand side of the attack. Jordan Veretout and Bryan Cristante formed the double pivot in the centre of the midfield. The experienced Bosnian international Eden Dzeko led the line as the lone striker.

Sassuolo started the match in a 3-4-3 structure with Francesco Caputo leading the line and the talented Domenico Berardi supporting him from a deeper position.

Roma took control of the match early on and indeed they were 4-0 up at half-time despite having a penalty decision overturned in the first couple of minutes following a VAR check. Sassuolo struggled to contain Roma as they progressed the ball into the final third and then spaced their attacking players across the width of the field. On the right-hand side, Justin Kluivert retained his wide position while Lorenzo Pellegrini, playing as the ’10’ drifted forward to occupy the half-space on that side.

On the opposite side, the structure was different with Henrik Mkhitaryan moving inside to occupy the half-space while Aleksandar Kolarov moved forward from left-back to occupy the wide space. This structure led to Roma effectively overloading the Sassuolo defensive block and creating opportunities throughout the match.

Here we see the movement to occupy spaces that Rome used continually in the first half of the match in particular. You can see Kluivert in the wide-area on the near side and Pellegrini has made the move forward from the deep central position, the ’10’, into the half-space on that side. On the far side, Mkhitaryan has moved inside to the half-space while Kolarov can move forward to fill the wide area. 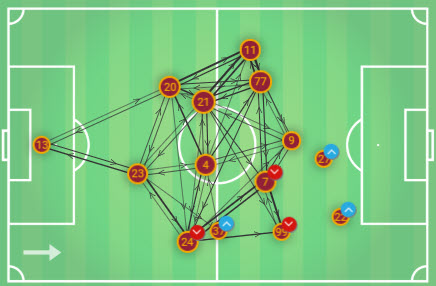 The pass map for Roma in the match shows this shape and structure perfectly With each player occupying his sector in the final third and allowing Roma to find routes into the Sassuolo penalty area.

Despite the impressive structure from Roma in the final third, there were still issues as the home side looked to progress the ball from the backline into more dangerous advanced positions. The two central midfielders for Roma, Jordan Veretout and Bryan Cristante are normally more forward-thinking in terms of taking up positions to allow the ball to be progressed past the opposition midfield. In this match, there was a definite sense that Fonseca was keen to maintain the structure in the build-up phase with the back four and double pivot closely positioned.

Too often we saw situations in which the Sassuolo line of pressure was able to pin Roma back in deeper positions. Neither central midfielder for the home team seemed to be willing to move to a higher line, beyond the first line of Sassuolo pressure and this meant that Roma were forced to play longer passes to try to access the highest line more quickly. A small positional adjustment would have seen Roma able to play through the thirds and control the flow of the game far easier.

With Kolarov always looking to move to a higher line when Roma were in possession we saw the French midfielder, Veretout, dropping in to fill the space in the left-back slot to offer an out ball for the central defenders. On the right-hand side, with Kluivert staying high in the final third, we saw the right-back Alessandro Florenzi staying deeper to facilitate the build-up. This asymmetrical structure was designed to allow Roma to progress the ball towards the final third whilst still allowing the forward players to occupy spaces to force the Sassuolo defensive players deeper. Once again Fonseca appeared to use his central midfielders to progress the ball from deeper areas. There were definite opportunities, however, for the midfielders to move into higher lines in order to play through the lines of pressure from the away side. Fonseca chose to be cautious in securing comfortable possession of the ball.

Sassuolo struggle to play through the centre

Sassuolo actually enjoyed a slight advantage in terms of possession of the ball but they still struggled to effectively play through the Roma block in order to create chances. In the second half, when they were already 4-0 down at half-time, we saw them control the game more but with Domenico Berardi, in particular, looking to move into central areas the Roma defensive block was difficult to penetrate.

Out of possession, we saw the two wide attacking players for Roma drop back into a deeper central block with Dzeko holding his higher position as the out ball. With little space between the lines for Roma, we saw Sassuolo struggle throughout the match to find passing lanes that could access these central areas. The build-up from Sassuolo saw them try to play wide into spaces at the sides of the defensive block. The issue was that the passes into these wide spaces were too slow and easy to defend for Roma.

Roma were content to allow Sassuolo to access wide areas when they were in possession of the ball. They were content that their fullbacks and deep central midfielder could press out to defend the wide areas when Sassuolo moved the ball forward. The compact block was designed in such a way that when the away side moved the ball centrally we saw Roma able to press quickly with their players closely positioned to one another in order to provide support as they pressed.

Sassuolo tried to play wide before shifting the ball centrally to the three attacking players. The issue was that the first pass, that went wide, was too slow and Roma were able to shift across to close the space down and quickly press the wide midfielder. If the initial pass was quicker then we would have seen Sassuolo able to play from these wide areas into the feet of their attacking players far more quickly and this would, in turn, lead to more goalscoring chances being created.

If anything it would be fair to say that 4-2 actually flattered Sassuolo despite the fact that they were on the losing side of the game. Rome were extremely efficient in the first half and used the ball extremely well both in terms of the tempo of play and their occupation of space across the final third.

Sassuolo struggled to contain the movement of the Roma front players. As the different movement patterns on the left and the right-hand side provided an interesting dimension to the match. This saw the  Sassuolo defence forced to cope with varying threats and positional structures depending on which side the attacking team were probing at any given time.

The jury is still very much out on Fonseca at Roma but this match will go a long way to bolstering the confidence of the Roma fans.