Tim Walter is one of the most promising coaches in Germany and took over VfB Stuttgart this summer. He finished last season in a great sixth position with his former club Holstein Kiel and the people took notice of him because of his interesting approaches during his team’s build-up. Now, at Stuttgart, he’s got players with higher induvial quality. However, since 26 players joined the club or returned from loan and 21 left the club, it was clear that it would take some time until all mechanisms under their new coach would work out.

But before this game of the sixth matchday of the 2. Bundesliga against Jahn Regensburg, Walter’s team has won 11 points out of their first five games, lost none and were in second place behind HSV. On the other side, Regensburg had seven points and were in eighth position. In light of this, Stuttgart were the favourites to win this match and were able to do so.

In this tactical analysis, we will look at both teams’ tactics and examine how Walter’s team were able to get away with the three points.

Mersad Selimbegović lined his team up in a 4-4-2 formation with the partnership of captain Marco Grüttner and Erik Wekesser upfront. Alexander Meyer was between the sticks while the back four in front of him was made of Benedikt Saller, Sebastian Nachreiner, Marcel Correia and Chima Okoroji.

Jann George and Sebastian Stolze were the wingers while Andreas Geipl and Max Besuschkow occupied the central midfield.

On the other side, Walter used a 4-3-1-2 which was very fluent as we will see later in this analysis. The young Swiss goalkeeper Gregor Kobel played in goal. Pascal Stenzel and Emiliano Insúa were the full-backs. Holger Badstuber and captain Marc Oliver Kempf played in the central defence. The 21-year-old Orel Mangala played in front of the back four and the two new signings Philipp Klement and Philipp Förster supported him in the central midfield. Daniel Didavi played behind the two strikers Silas Wamangituka and Nicólas González.

Stuttgart’s patterns during the build-up

Stuttgart dominated the game and had after 90 minutes 70.21% possession and used a lot of rotations and flexible positions during the build-up to create passing lanes. Walter’s team played 501 passes with a success rate of 86.23%. These statistics outline the dominance of Stuttgart, especially when you compare them to Regensburg’s 190 passes with just 72.63% finding their target.

The goalkeeper Kobel was also very important since he was almost always involved in the first stage of the build-up. He was also often positioned outside his penalty box to provide a passing option and support his teammates. Since his team was as usual extremely flexible, he was important to provide a safe option for a back pass and received 37 passes. On the other hand, he played 42 short passes which were all successful. Five out of his eight long passes found a teammate which is also a good value for a goalkeeper but the relation between the long and short passes generally show that Stuttgart mainly tried to build up their attacks with short passes.

Regensburg defended in a 4-4-2 and tried to keep the distance between the two four-man lines very short as you can see in the following image. We’ll look at their other patterns later in this analysis but most of the time they defended in their 4-4-2 formation and put pressure on their opponents about at the halfway line.

The main reason that they tried to stay vertically compact is that Walter’s team often uses a numerical disadvantage in their own half during the build-up to have more players in the final third as you can perfectly see in the image below. Also, they permanently change positions and use unusual movements. In the example below, the usual positions of the players are labelled to show their incredible positioning. 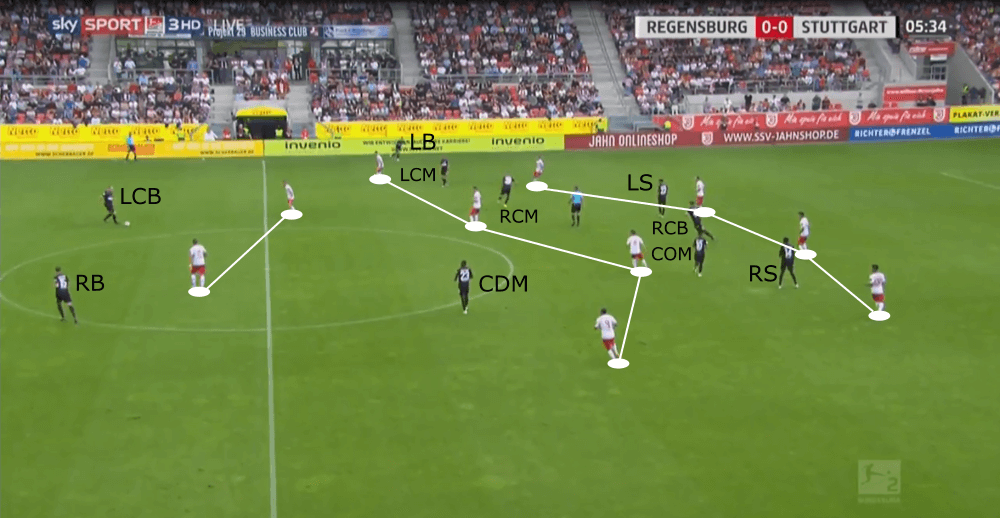 When Selimbegović’s team was able to keep the space between the two lines very small, it was hard for Stuttgart to create any chances since there were almost no forward passing options and no room to exploit. However, as soon as the midfield of Jahn pushed forward and the back four didn’t move forward fast enough, there was the space which Walter’s team needed. Besides, the likes of Klement, Förster and Mangala have got the quality to dribble into this space between the lines as you can see in the image below. However, Regensburg were mostly able to avoid gifting such a huge space between the two lines to Stuttgart.

Most of the teams nowadays use central midfielders to create numerical superiority in the first phase of the build-up to always have at least one free player. Usually at least one of the midfielders positions himself in the central area in front of the central defence. However, the German coach Walter thinks that it is easier for the opposition to put pressure on this midfielder when he stays in this space for a longer time and waits for the pass.

Due to that, his team often leaves this space vacant to allow different players to make a run in this area to receive a pass. In light of this, it should be harder for the opponents to track and follow this player and as a consequence, it’s more difficult to defend against.

In the example below, Förster moves into the free space to create a passing option but his teammate Insúa chooses to play a simple pass to the usual right-back, Stenzel. 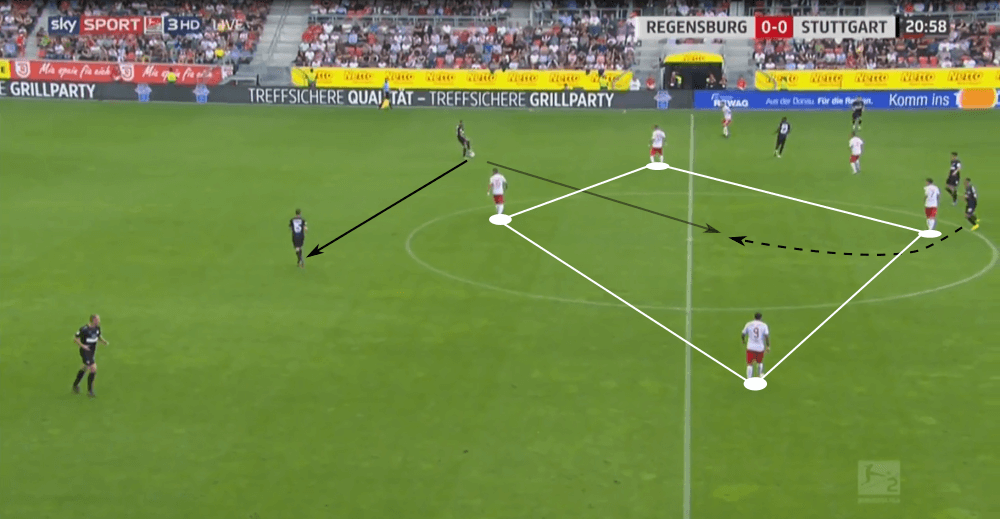 While the back four, as well as the three deeper midfielders of Stuttgart, permanently changed their positions to create passing lanes, Didavi and the two strikers also rotated several times but mostly occupied the three same positions. Two of them were positioned in the wide areas to provide width while the third one was in the centre upfront. The 19-years-old Silas either positioned on the left or the right-wing. González and Didavi alternated with one another who would occupy the other wing and who would position in the centre. In the example below, Silas is on the right-wing, Didavi on the opposing one and the Argentinian striker is in the middle. 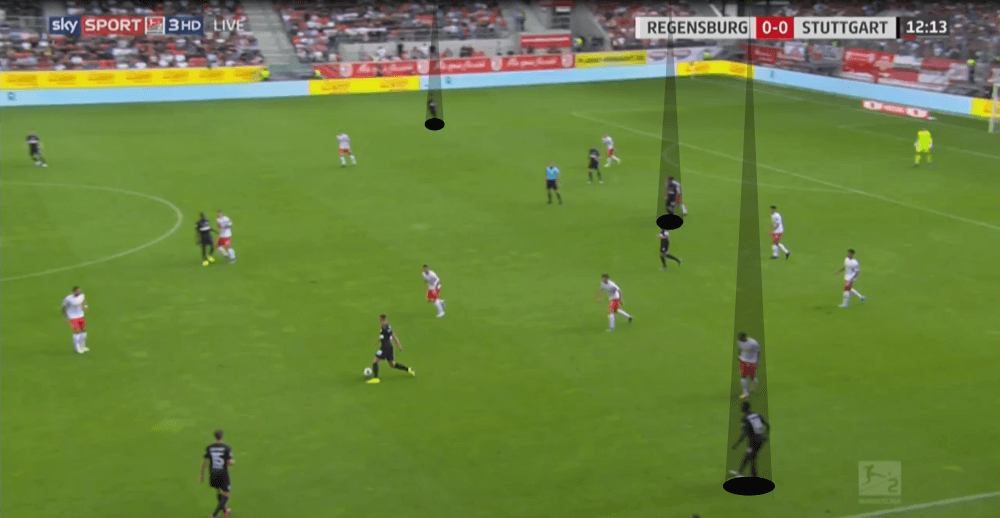 Even though Stuttgart mainly used short passes during the first stage of the build-up, they also sometimes used long passes. The main reason for that is the numerical disadvantage in their own defensive third. Although they often were able to solve these situations with short passing combinations, on some occasions they played long balls since further up the pitch they had enough players to win the second ball.

In the example below, Regensburg put pressure on their opponents extremely high up the pitch and Kobel has no other choice but to use a long pass. However, due to the numerical inferiority in the defensive third, they have more players in a higher line where the long ball lands and so they can win the second ball.

Nowadays it’s nothing too special that players use certain movements during the build-up or change positions. It’s normal when a defensive midfielder drops between the centre-backs or a when the wingers tuck in to create space for the full-backs who push forward. Usually, the centre-halves only real movement during the build-up is maybe to position a bit wider to create space in the centre for the defensive midfielder who drops.

However, Stuttgart’s centre-backs Kempf and Badstuber showed once more in this game very interesting and special movements. Especially the 24-years-old captain of the team Kempf joined in the first half his teammates further up the pitch while his college stayed deeper to dictate the build-up. However, in the second half, the captain mostly positioned deeper and didn’t permanently join the likes of Didavi and González in the final third.

However, also his teammate Badstuber showed some interesting movements. Most of the time, he was positioned deeper between the two full-backs and organised the build-up. But he also made sometimes some interesting runs to open up passing lanes. In the two images below, he positions each time in an unusual space for a centre-back, but due to that, he is a possible passing option for his teammates and receives the ball. 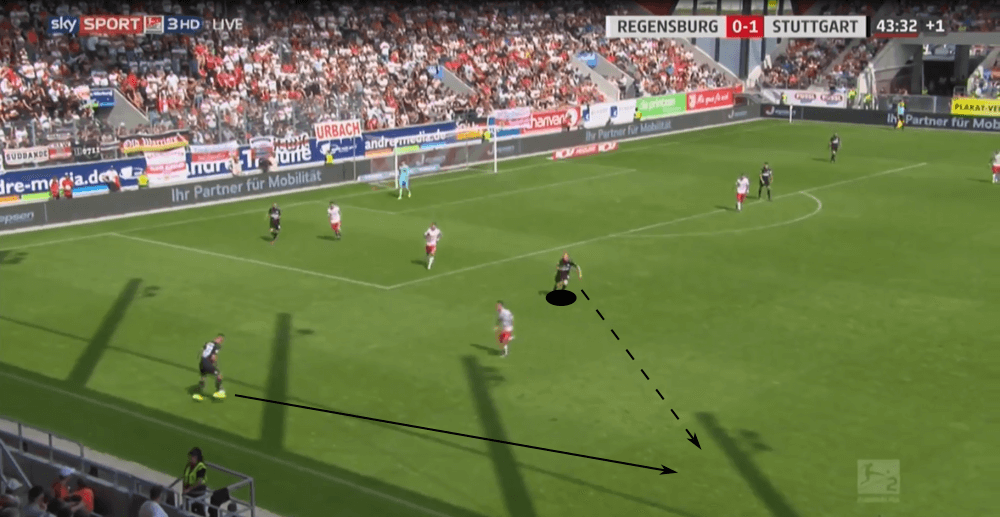 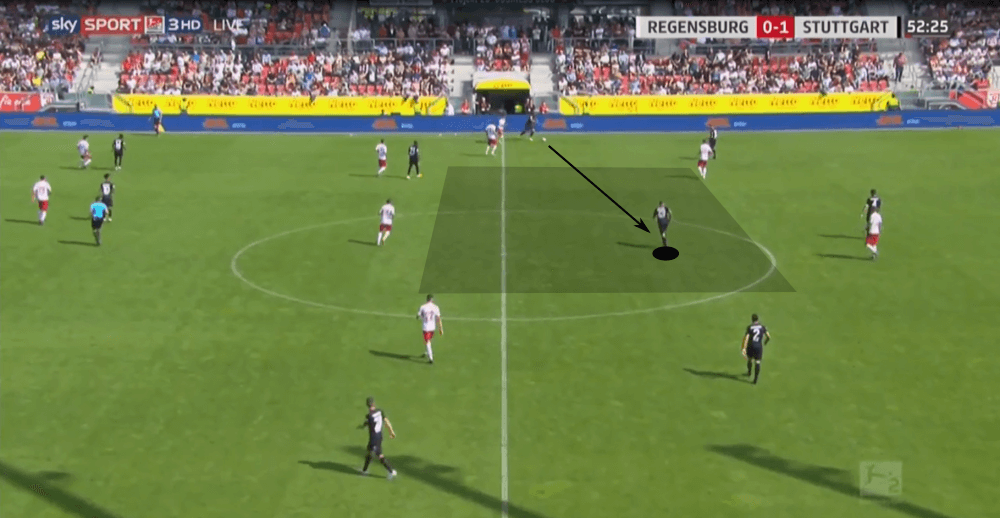 When the team of Selimbegović were in possession they usually tried to use short passes to progress the ball further up the pitch. However, Stuttgart used a very high pressing to avoid that. They also positioned themselves very high when Regensburg would have had a goal kick. In light of this, they forced Regensburg’s goalkeeper Meyer to push his team further up the pitch and play the goal kick long as you can see in the image below.

When Walter’s team were in possession, Regensburg mostly tried to create a low block as already shown at the beginning of this analysis. They stayed in their narrow and vertical compact 4-4-2 to avoid any penetrating passes by their opponents.

But in some cases, they tried to put pressure on their opponents further up the pitch and take advantage of their numerical superiority in the third of Stuttgart. Even though Walter’s team has got huge individual quality and mostly solved it with their intelligent movements, in some situations Regensburg was able to win back the ball and then they logically tried to get as fast as possible into the front of the goal. In the example below, they can win the ball high up the pitch and then immediately pass forward to create a goalscoring chance. However, in this situation, they weren’t able to score.

Since Stuttgart usually have got so many players in the final third, it gifts their opponents space for counterattacks which Regensburg especially exploited in the second half. They had in the 90 minutes six counterattacks and sometimes it was easy for them as soon as they overcame the counter-pressing of Stuttgart. In the image below, Regensburg plays two vertical high passes after one and another to overcome the counter-pressing. This counterattack ended in a dangerous shot but Regensburg weren’t able to score.

This tactical analysis showed that Stuttgart is an enormous threat already at this early stage of the season. They are currently at the top of the table and will stay there if Hamburg would lose against St. Pauli on 16 September.

On the other hand, Regensburg is now in an acceptable 11th position and will face Dynamo Dresden next week. They showed in this game that they can defend well and that counterattacks are still one of their greatest strengths.