When a team from the top of the table meets another one from the relegation zone, it usually doesn’t hold too much tactical interest due to the huge distance between the teams in performance which results in an easy three points for the stronger team. However, the match between Borussia Dortmund and Stuttgart in the Bundesliga was a rare, different case, since it was a difficult victory for Dortmund despite the 3-1 result. This tactical analysis will reveal why Dortmund struggled against a team from the bottom end of the table.

The game was a tactical battle between the two sides as Stuttgart’s approach made a massive task for the home side and caused a goalless first half. It even seemed it would be a 1-1 draw until the 84th minute, but with a clinical end game, Dortmund saved the day and collected the much-needed three points.

Both sides were in desperate need of the win, only with different motivation. Dortmund had dropped massive points recently. They had three draws in their last five games in the Bundesliga, with one defeat and a lone victory. Thus if they wanted to keep up with Bayern Munich, they needed to return to winning ways, especially after dropping out of the Champions League against Tottenham Hotspur.

Meanwhile, Stuttgart needed points to escape from the relegation zone. They recently made some crucial steps towards achieving that, such as beating a direct rival (Hannover) and drawing with Werder Bremen. Therefore, Stuttgart came into this game with positivity. Instead of the usual 4-4-2 formation though, Markus Weinzierl deployed the less frequently used 5-3-2.

The core of the defence was the usual Ozan Kabak, Benjamin Pavard and Marc Oliver Kempf but this time Andreas Beck and former Liverpool defender Emiliano Insua took the wing-back positions. Alexander Esswein moved higher to create the first line with Nicolas Gonzalez. 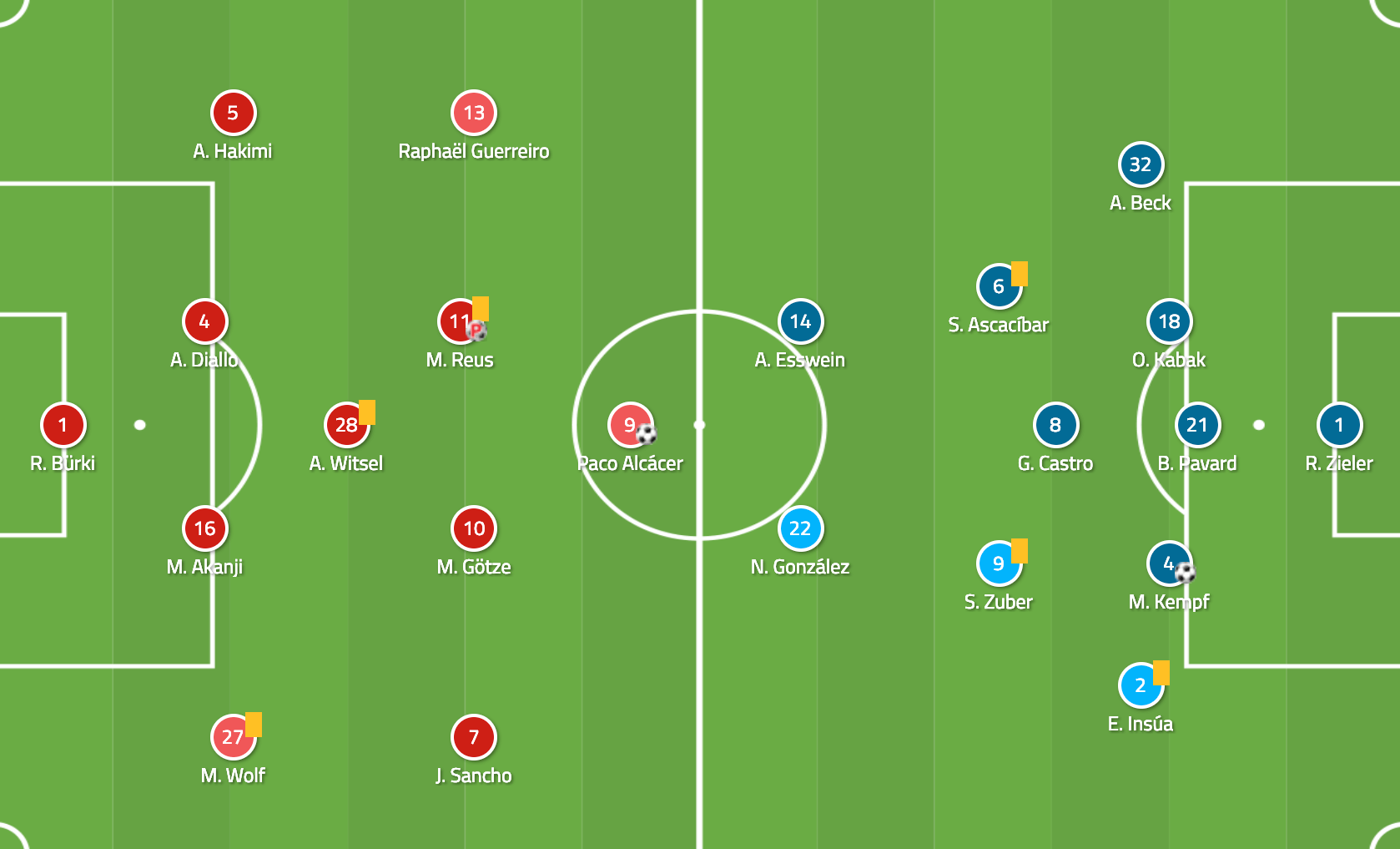 On the other hand, Lucien Favre also made a couple of changes in the formation and starting lineup. He opted for a 4-1-4-1 shape instead of his favourite 4-2-3-1.

Moreover, Abdou Diallo moved to the centre of defence to pair up with Manuel Akanji. Thus both Achraf Hakimi and Marius Wolf got the chance to play in the full-back positions. Axel Witsel took the defensive duties as the lone pivot in midfield to give freedom to Marco Reus and Mario Götze to play higher. Therefore, Thomas Delaney and Dan-Axel Zagadou had some rest. Jandon Sancho and Raphael Guerreiro occupied the wings and Paco Alcacer was in the centre-forward position.

As I mentioned, Stuttgart formed a massive 5-3-2 shape which focused on blocking the central areas and forcing the opponent into the wider zones. It is natural in this formation that the opponent will find a bigger space around the first and second lines, mostly on the wings.

To start with, all the lines aimed to maintain a narrow shape in order to deny balls for Dortmund’s central players and restrict actions on the flanks. Thus Stuttgart’s front line stayed close to each other to protect that area. However, when the ball moved wide the first two lines shifted to the ball side to close down the wing. Also, the near-side striker used a curved run to press the ball-carrier.

Stuttgart came into this game with a defensive manner which yielded a really low possession of 26%. However, they had a stable defence and rarely pressed high which meant their attacking game was emphasised on counter-attacks.

Although it was not successful they almost took the lead in the 32nd minute. They tried to overload Dortmund’s last line at a goal kick. So after a long ball from the goalkeeper, Dortmund collected the ball but two Stuttgart players rushed on him, won it back and initiated the counter-attack which ended with a scoring chance. 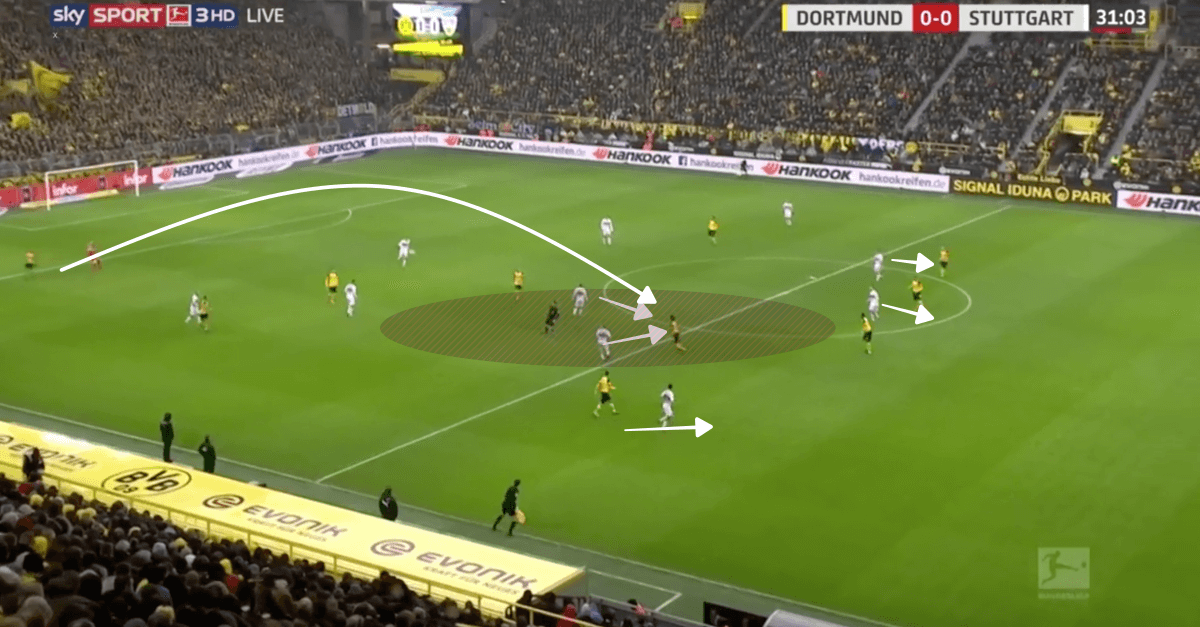 Since Dortmund had the ball 74% of the time, it is a logical step to take a look at their possession phases. Dortmund used the full-backs and sometimes the centre-backs to play the ball forward due to their wing-focused attacks. They tried to create pass combinations down the wings between the full-backs, wingers and the nearby attacking midfielders.

In possession, Dortmund used wide wingers and wide full-backs while Reus and Gotze occupied space between the second and last lines. Thus Witsel stayed deep to provide a central option, although they mostly built through the full-backs, as I mentioned above.

Although the formation was 2-3-2-3 in possession, it sometimes changed to three at the back as Witsel dropped in between Diallo and Akanji, which allowed the full-backs to push forward.

One of the biggest advantages of this setup was that it allowed Akanji or Diallo to advance on the ball at the half-spaces due to the additional cover at the back. It also provided an opportunity to manipulate the opposition shape. The wingers were narrow and pinned the opposite wing-backs to the last line which gave more space for the full-backs and Akanji.

In possession, it was clear that Dortmund favoured the right side over the left since most attacks occurred on that wing. This was evident in the setup, as Gotze occupied the right half-space and Reus the centre, thus the left half-space remained unoccupied.

However, Reus’ role was to shift to the ball side and provide a vertical or central option while Alcacer stayed in position. Thus when the ball was on the left, Reus moved there and Guerreiro often dropped into the left half-space to give an option there, as the images highlight below.

When Diallo advanced on the ball, Reus moved across to the ball side to provide an additional option, but Stuttgart quickly closed on the ball carrier.

The home side struggled in the first half, especially in the final third. They failed to create scoring chances. These remained an issue in the second half too, although there was a slight improvement. Dortmund were able to speed up their play sometimes and find more space after switching play, which forced their opponents into a slightly deeper position. Dortmund were therefore able to create stable circulation at Stuttgart’s half. 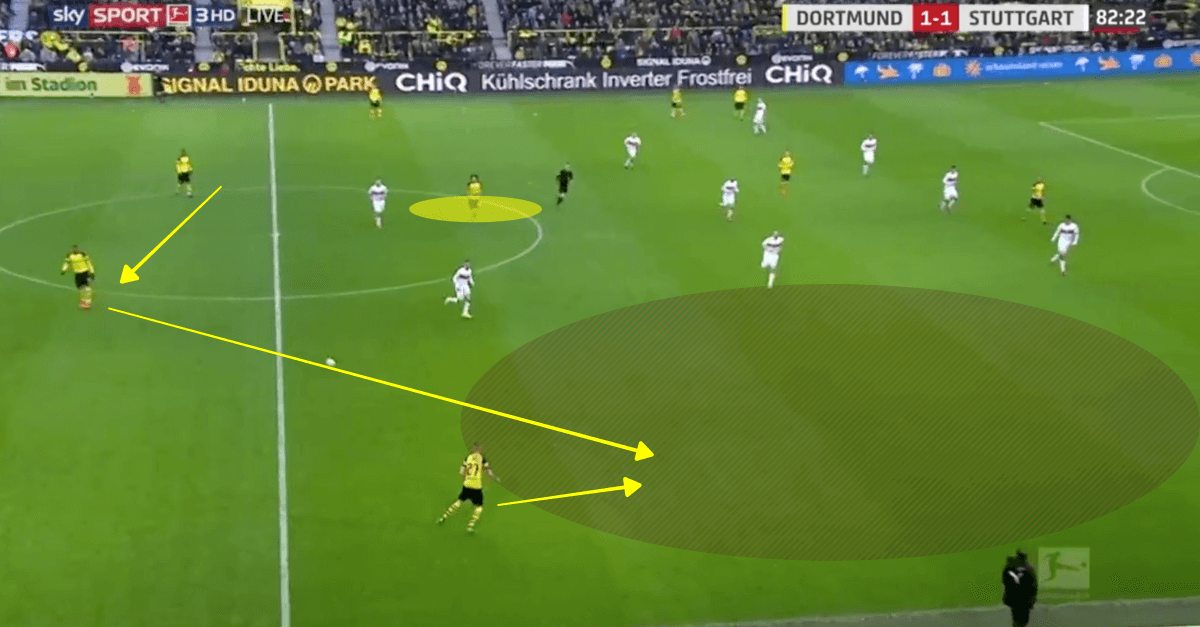 One of the crucial factors in the second half was the position of Witsel who moved further up the pitch to provide cover and a quick escape for the far side.

Overall, Stuttgart had a strong performance, although mostly in defensive work as they reduced Dortmund’s attacking threat. They were close to leaving Signal Iduna Park with a better result.

On the other hand, Dortmund had big issues with disrupting the opponent defensive shape to find a breakthrough. They failed to stretch the visitors’ lines or create a decision-making crisis, which resulted in a dominant game but a lack of chances, despite scoring three times.