Following their disappointing exit from the Europa League at the hands of Rennes, Real Betis manager Quique Setien has come under some scrutiny of late. The doubts were further compounded by a 2-1 loss to top-four rivals Getafe last weekend, a result which left them six points adrift of the Champions League places.

Their hosts on Sunday, Celta Vigo, have been battling against relegation this season. Following defeat to Eibar in their last outing, Miguel Cardoso became the second manager to lose his job at Abanca-Balaidos this term. Fran Escriba was appointed ahead of the visit of Betis, with just 12 games to drag the side out of trouble.

Any possible resurgence was put on hold on Sunday, however, with Betis running out comfortable 1-0 winners. This analysis will attempt to dissect where it went wrong for Celta. 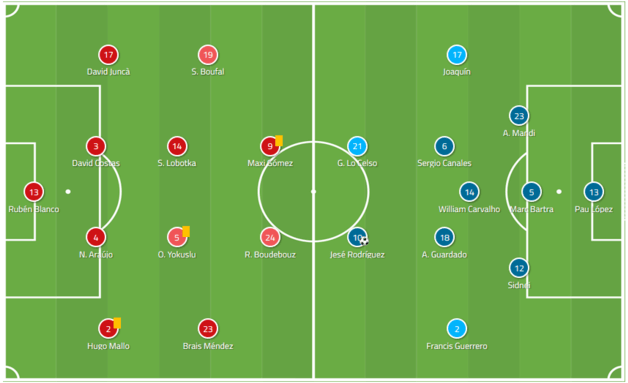 Quique Setien once again lined up with three at the back, behind anchorman William Carvalho. The midfield and front line switched between a 3-2 and a 2-3 setup, with Giovani Lo Celso and Sergio Canales varying their play throughout. Jese Rodriguez lead the line, while the selections of Joaquin and Francis Guerrero as wing-backs signaled their attacking intent.

Fran Escriba is a coach known to focus on defensive organisation and solidity, and so Betis were expected to enjoy large amounts of possession once again. They did just that, keeping the ball for 63% of the game.

When opponents are compact centrally, Betis usually look to circulate the ball along the first and second lines, shifting their opponents from side to side in the process. As soon as sufficient space opens up on either flank, they progress down the sides before either crossing to the box or making link-passes into the 10 space via the wing-backs.

When the opponents are open centrally, Betis look to play through the gaps in the midfield before either combining centrally or feeding the wings for a cross or cutback into the box. Celta set-up in a low block, with two lines of four behind the strikers. However, they were anything but compact, allowing Betis to play passes into the space between the defence and midfield with ease.

William Carvalho joined up with the back three of ex-Borussia Dortmund man Marc Bartra, Aissa Mandi, and Sidnei to feed balls into the 10 space, normally occupied by Giovani Lo Celso, Andres Guardado, and Sergio Canales. Jese Rodriguez also dropped off the front line at times.

The image below shows Bartra making a simple pass to the pivot player, Carvalho. The Celta striker tasked with applying pressure to Bartra and guiding his passes allows a perfect passing lane to open up towards Carvalho. The home team’s forwards were consistently guilty of failing to angle their approach correctly to cut off passes with cover shadows. 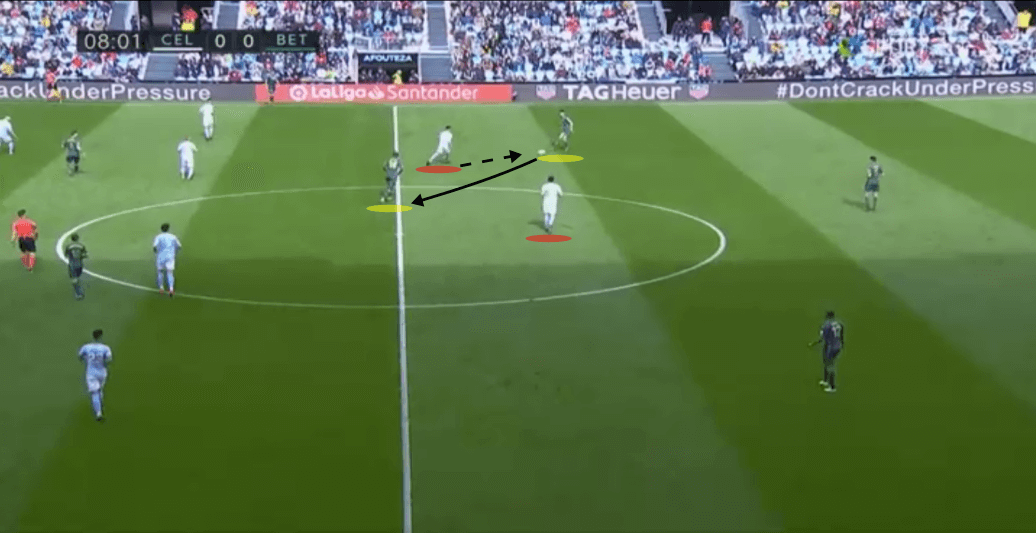 Once he has received possession, Carvalho has time and space to turn before playing a pass behind Celta’s midfield to Canales. The gap between Lobotka and Okay Yokuslu is far too large and once again, there is no effective implementation of cover shadows to prevent passes into the attack. Canales also has time and space to turn on the ball before feeding the open space on the left wing. 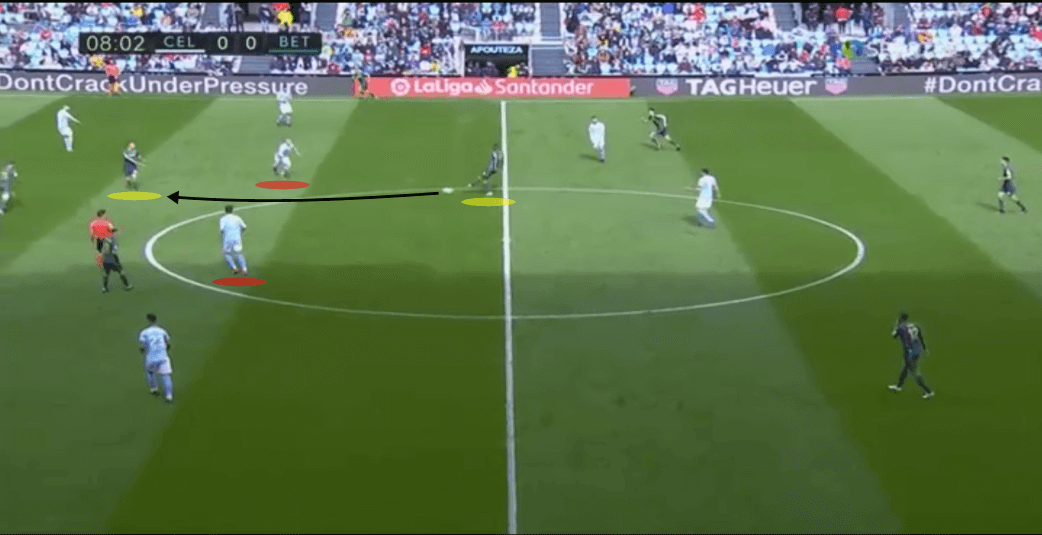 It wasn’t just Carvalho who had easy access to the attack. The outside centre-backs regularly found the front players with passes between the opponent’s wide midfielders and central midfielders. Lo Celso and Canales in particular had joy when seeking out passes into the half-spaces before linking up in the final third.

The image below shows Sidnei playing a simple penetrative pass through to Guardado, who has pushed up between the lines with Betis’ build-up diamond comfortably dominating the first phase of attack. Celta’s midfield spacing is poor again, and no pressure is applied to the pass. 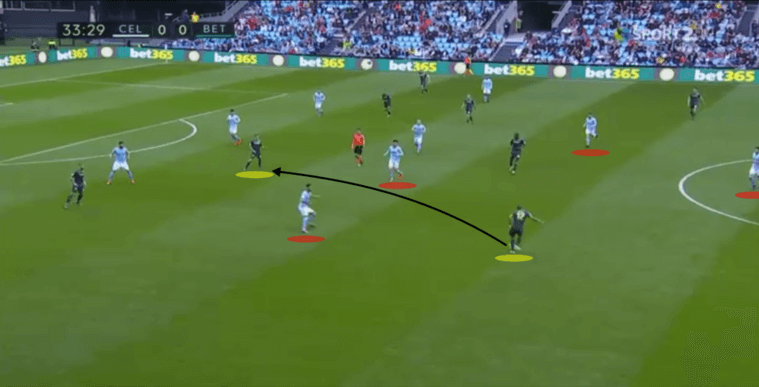 Despite implementing a positional press on Betis’ build-up in deep areas, the hosts failed to prevent simple progressions. Quique Setien is noted for his side’s intelligent and adaptable build-up methods in evading pressing or marking schemes from the opponents.

One method they used in this game involved third-man passing. It didn’t require much effort due to how static and passive Celta’s defending was, and it proved effective in exiting the first phase. With the home side setting up in a diamond for Betis’ goal kicks, all three of their defenders were occupied.

The image below shows keeper Pau Lopez passing to Mandi. The Algerian’s back is to the play and pressure is arriving from Lobotka behind him. Mandi plays a one-touch pass to the side for Bartra to receive behind his marker’s cover shadow. 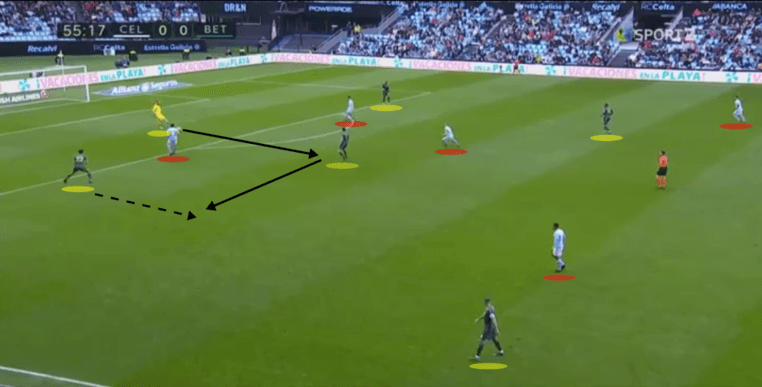 The space exists for the Spanish centre-back to carry the play forward before making an incisive pass towards Guardado behind Celta’s midfield pressure. The playmaker has acres of space to attack, once again feeding the open wide areas. Notice how the midfielder who had been occupying the base of Celta’s diamond has vacated this space to follow Canales. 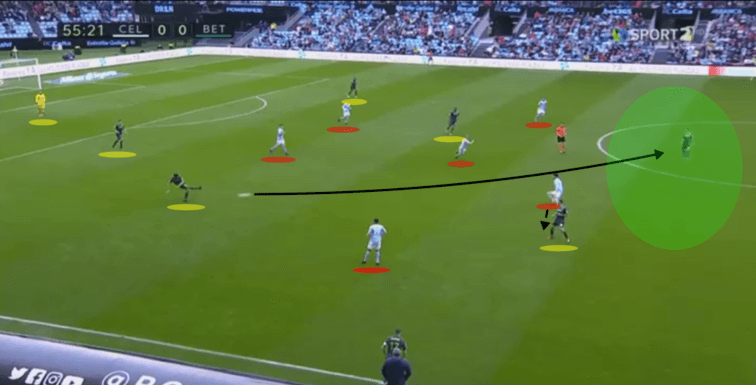 Another piece of clever build-up play involved the use of rotations to disorganise Celta’s marking and free up Carvalho to progress the play. Mandi pushes into midfield to carry his marker away from the first line, allowing Sidnei to play horizontally to Bartra. Mandi then drops back onto the first line, again taking his marker with him. Before making this final action, Carvalho had been inaccessible. 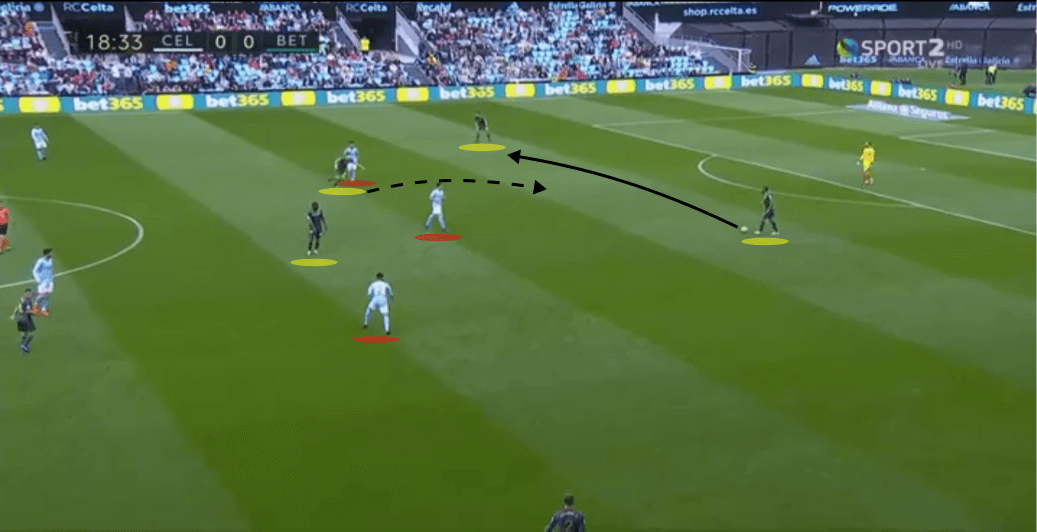 With Celta’s marking scheme unsettled, a passing lane is now open between Bartra and Carvalho. The Portuguese midfielder moves to receive before playing a one-touch pass onto Lo Celso behind the press. 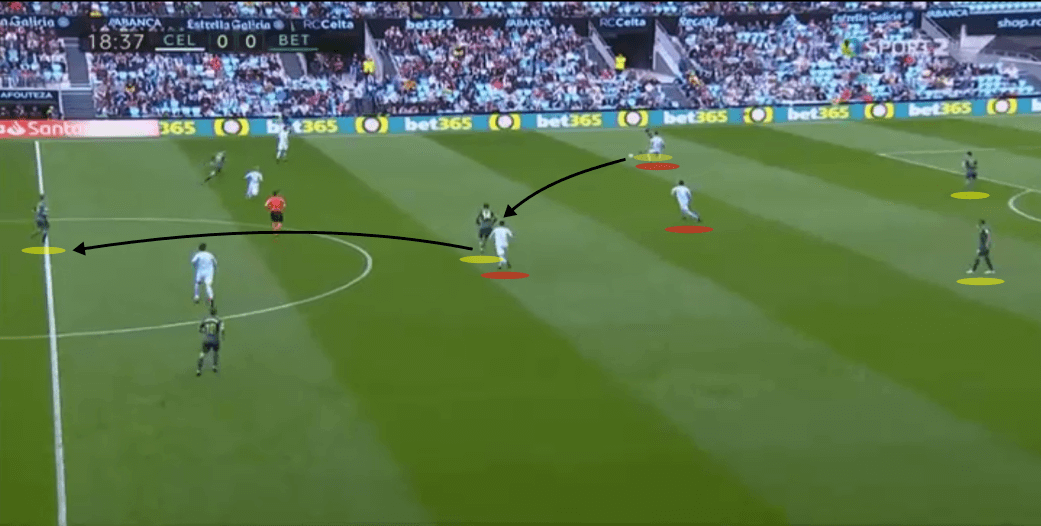 Due to the poor quality of the home team’s pressing and defensive organisation in general, spaces frequently opened up between the lines for Betis’ playmakers to exploit.

Given the back four’s focus on controlling Betis’ front players, their line was manipulated easily and became extremely narrow at times. This left large spaces on the flanks for the wide men to arrive into and supply crosses and cutbacks to the box. Joaquin provided this outlet on the right, but the introduction of Cristian Tello on the left following Francis’ injury proved pivotal.

More attack-minded and positive with his play, the former Barcelona man consistently arrived in the final third to receive from the attacking midfielders. The image below is taken from the build-up to the away side’s winning goal.

With Celta’s back four narrow in an attempt to prevent progressions through to goal via the centre, significant space opened up on either flanks. Canales feeds the ball out to Tello on the left and the winger has space to dribble towards goal, before his shot is parried by Ruben Blanco. Stoke City flop Jese Rodriguez is on hand to slot home the rebound. 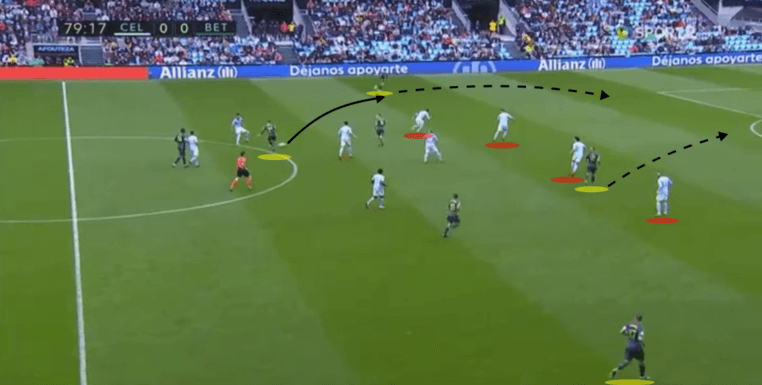 Playing passes into the space between Celta’s midfield and defence proved to be a constant theme of Betis’ attacking play. The defensive line generally closed off all three gaps to prevent the attackers penetrating centrally. Tello and Joaquin regularly found time and space to receive either side of this line, before dribbling towards goal or playing a low cross into the box.

The image below provides another example of this, with Francis wide open to receive and with time to pick out a teammate in the box. His cross finds Lo Celso, whose shot is blocked well by a Celta defender.

It seems Escriba was happy for Betis’ wing-backs to enjoy space out wide, preferring to focus on creating numerical advantages in central areas as a way of dealing with the crosses that came. It may have contributed largely to keeping the scoreline down, but as we saw previously, it also resulted in the decisive goal. 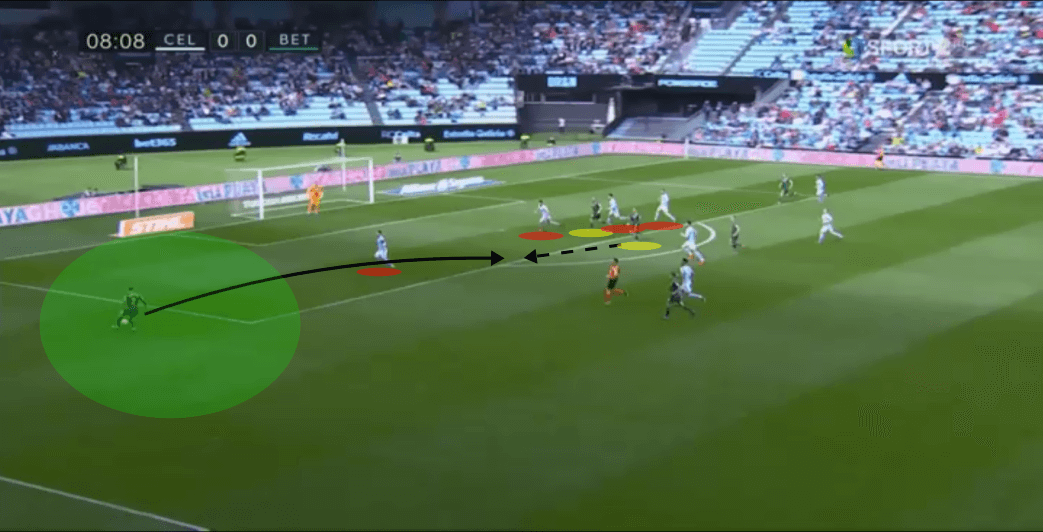 Overall, Betis were effective in accessing the 10 space and feeding the wings. However, they had a tendency to overplay in the final third. Despite registering 14 shots, only four of them were on target, and quality opportunities were often wasted by making one too many passes.

Celta Vigo showed little invention in terms of progressing the play, but their attempts to build sustainable attacks weren’t aided by the quality pressing game of their visitors. More often than not, Blanco was forced long from goal kicks, with Betis deploying a much more effective, cohesive positional press.

The image below illustrated a typical pressing scenario during Celta’s build-up. Lo Celso and Jese press the centre-backs, while Canales occupies Yokuslu. The option to play out to either full-back is also eradicated by the positioning of Francis and Joaquin.

Blanco plays long, as he regularly did, and Betis consistently dealt well with these hopeful passes by positioning themselves to win the first or second balls. 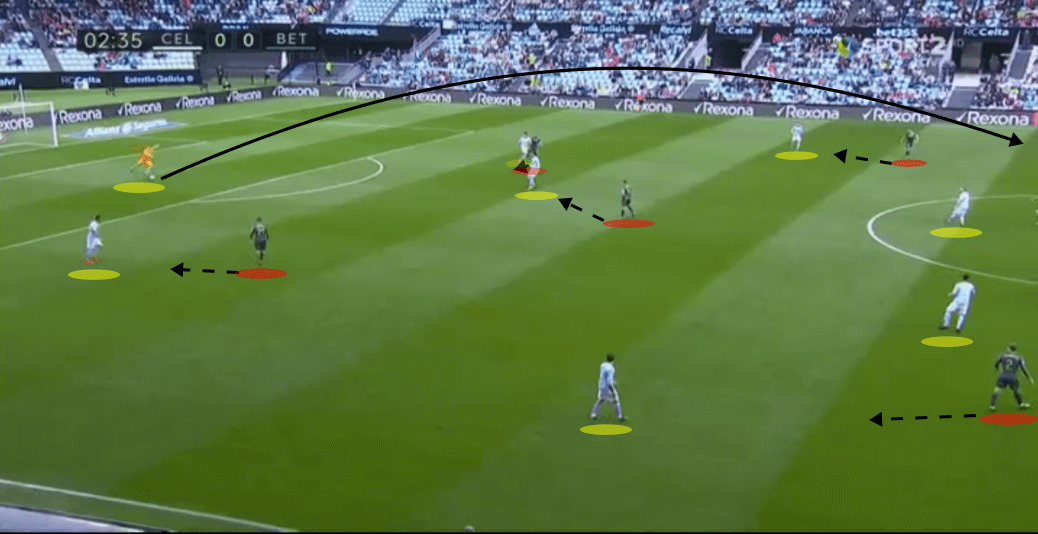 Whenever Celta managed to progress to the second phase of their build-up play, usually only in some of the transitional moments, they were met with a well applied diagonal press from Betis.

The image below highlights one such occasion. Having been forced to try and progress down the sides, Celta are trapped against the touchline by two lines of diagonal pressure. The first is made up of Jese, Guardado, and Carvalho. The support from behind comes from Lo Celso and Canales.

The same was applied on the opposite flank, but with Lo Celso, Canales and Carvalho forming the first line. Additional support arrived from the wing-backs in an attempt to close out the space and complete a turnover. 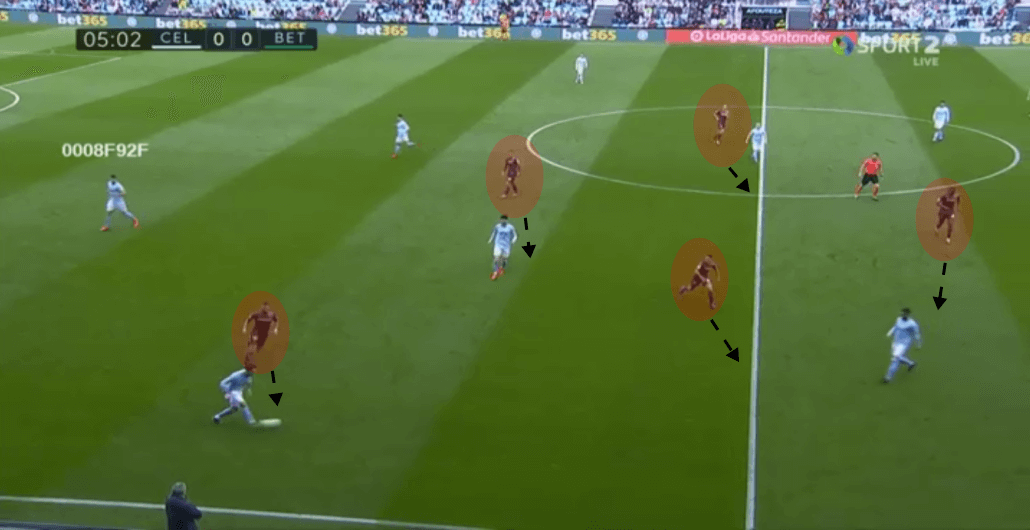 Although Celta Vigo created most of their limited opportunities during the transtions from defence to attack, Betis were generally effective with their counterpressing, further limiting their opponent’s attacking play.

Upon losses of possession in the final third, Betis closed out the space surrounding the ball-occupant with pressure in numbers. The image below shows an example of this, with three players pressing the ball and two providing cover on the outside. 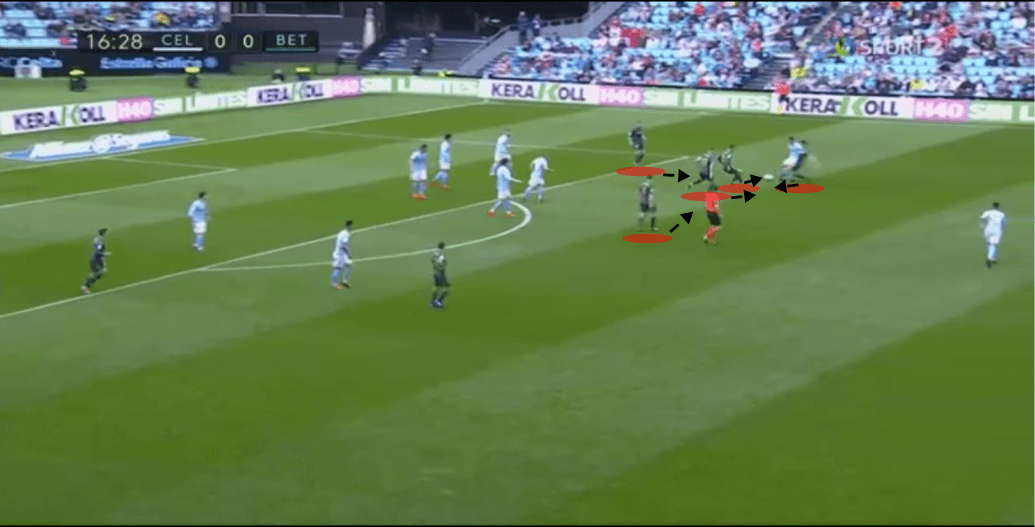 Due to Betis’ effective pressing and Celta’s lacklustre attempts to build attacks, the home team managed just one shot on target all game.

The result leaves Celta Vigo in 18th, one point behind Villareal. Nothing from this particular performance provokes much hope of a turnaround, and the return of Iago Aspas represents their only real chance of avoiding the drop.

Despite victory, Betis sit in eighth, still six points off the top four. Their lack of firepower and clinical edge in the final third is likely to see them miss out on a return to Champions League football next season.