Despite not having the best start of the season, Roma have been improving under Paulo Fonseca’s management. At the midpoint of the season, they were still one of the continental competition contenders. They were at the 4th spot on the table, one ahead Atalanta before the game.

For Juventus, they were not the only contender of the league, Inter Milan, their rival, dropped points in this round of Serie A fixture. A win at the Stadio Olimpico could bring them back to the top with point superiority.

The game ended in a Juventus win, with two hot young prospects, Nicolò Zaniolo and Merih Demrial suffered serious injuries. The result did not fully reflect the game, as the home team provided a stern test for Juventus.

In this tactical analysis, we will show you the tactics and analysis of both teams.

Fonseca organized his team to play in a 4-2-3-1 formation. Federico Fazio had some adductor problems recently, so Chris Smalling and Gianluca Mancini started the game together. Davide Santon was injured while Leonardo Spinazzola was on the bench, Alessandro Florenzi had his chance to impress the manager again. Some Roma attacking players, Justin Kluivert, Henrikh Mkhitaryan and Javier Pastore were injured and remained sidelined.

Maurizio Sarri’s Juventus played in a 4-3-1-2 formation, with Aaron Ramsey behind Paulo Dybala and Cristiano Ronaldo. Demiral won his position to start with Leonardo Bonnuci, as Matthijs de Ligt was on the bench. Juan Cuadrado was trusted as a right-back once again, starting ahead of Danilo. 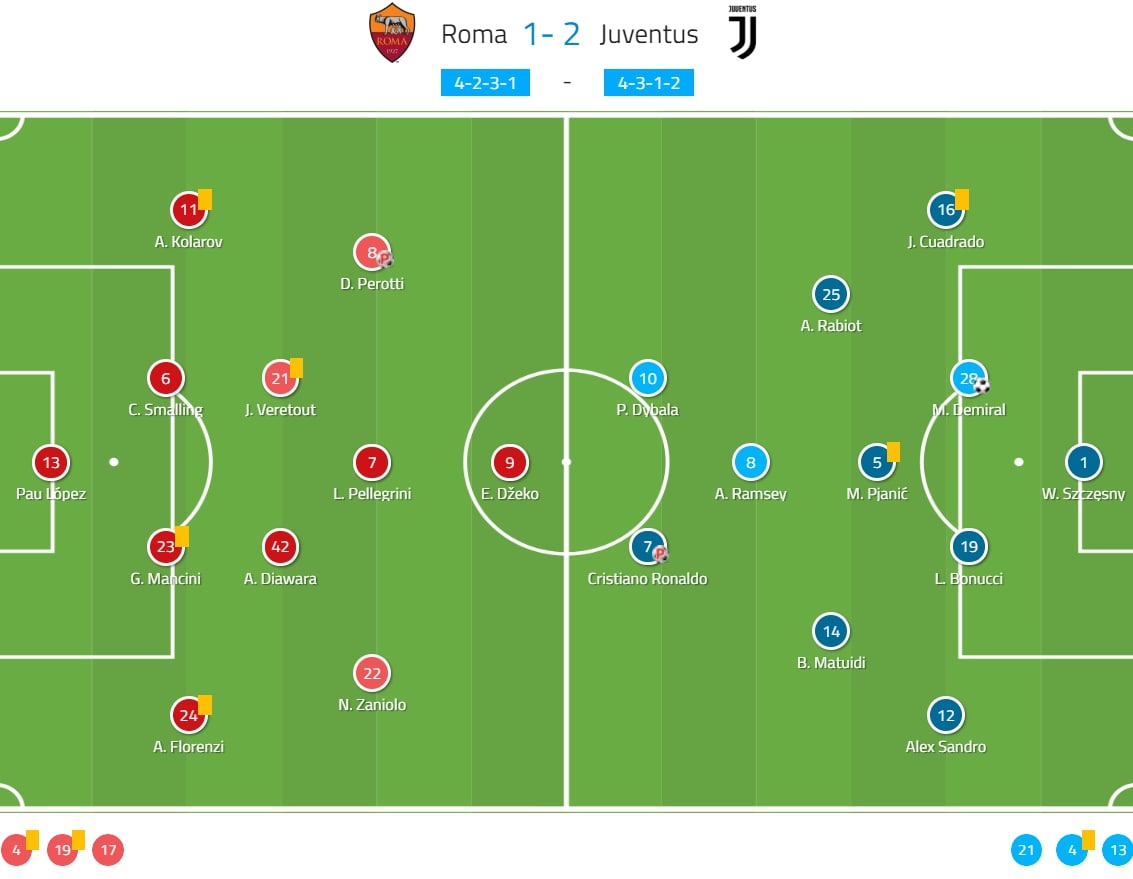 Juventus, as the stronger team, always intended to press high, retrieving the ball and dominating the game. However, by possession, they only had 43.61% in this game, much lower than their season average of 57.12%. The figure hinted the press of Sarri’s team was imperfect, as Roma exploited the flaws of their pressing system to play out from the back.

Juventus committed six players, which means, all their forwards and midfielders in the press. However, Roma played out from the back with a stable build-up structure that gave them the numerical advantages. Amadou Diawara, one of the pivots, always dropped to the defensive line, while his partner, Jordan Veretout stayed in front of the defenders to provide another layer of the build-up.

As clearly reflected in the following image, with three at the back, Roma pinned both Dybala and Ronaldo, allowing the third man to carry the ball forward. When Mancini was progressing the ball, this required the Juventus midfielders to step out and close off the Italian. Both Ramsey and Blaise Matuidi pressed Mancini, leaving Lorenzo Pellegrini free behind the midfielders.

Another player who dropped deep was Zaniolo, he created a passing triangle on the right flank and an extra man in the first phase of play. Despite Florenzi was also an easy passing option, Mancini passed to a better option, Pellegrini, as Roma could keep the ball at the centre and continue the attack.

This is the long-range passing map of Diawara. The Guinean had 10 long passes in the game, completed 80% of them. The figure was higher and better when it was compared with the season average, 5.09 long passes per game and 52.8% of completion rate.

Diawara provided another way for Roma to progress the ball, as his improving long-range passes were accurate to find the isolated player on the flank, switch plays or breaking the press. His presence provided stability in the first phase of Roma’s attack. 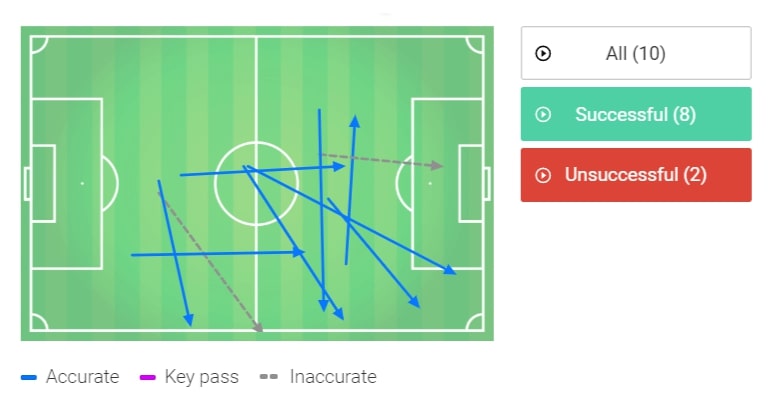 Roma in the final third

This is the heat map of Pellegrini, who was playing as an attacking midfielder in the game. However, as shown in the image, the most frequent area he appeared was the right half-spaces. His coverage was large, as his presence was all around the pitch, we could see in from zones 14, 15, 16, 18. 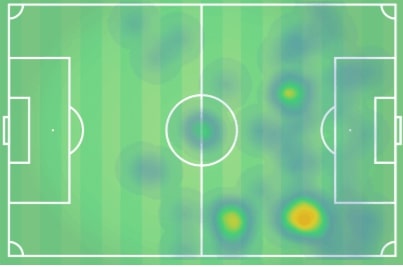 Another focal point of Roma’s attack was Edin Džeko. The Bosnian could drop between the lines to progress the ball, being used as a target man to fight for the long balls or invite pressures. He also combined well with Pellegrini, who provided numerous forward runs in the right half-spaces.

Roma players on the right had the freedom to roam their positions. As illustrated below, Zaniolo came inside, also took Alex Sandro out of his position. Džeko used his body to shield the ball from Adrien Rabiot and gave himself a wider angle to pass to space on the right.

The run of Pellegrini was also wise, as he was just jogging at the when Džeko retrieved the ball. Then, he suddenly sprinted, putting Matuidi behind and created a shooting chance for himself.

The performance of Džeko was not his very best, as he struggled to deal with the aggressive press of centre-backs under several circumstances. De Ligt had 13 interceptions and six clearances in the game, which on average, he had 5.11 and 2.88 only. 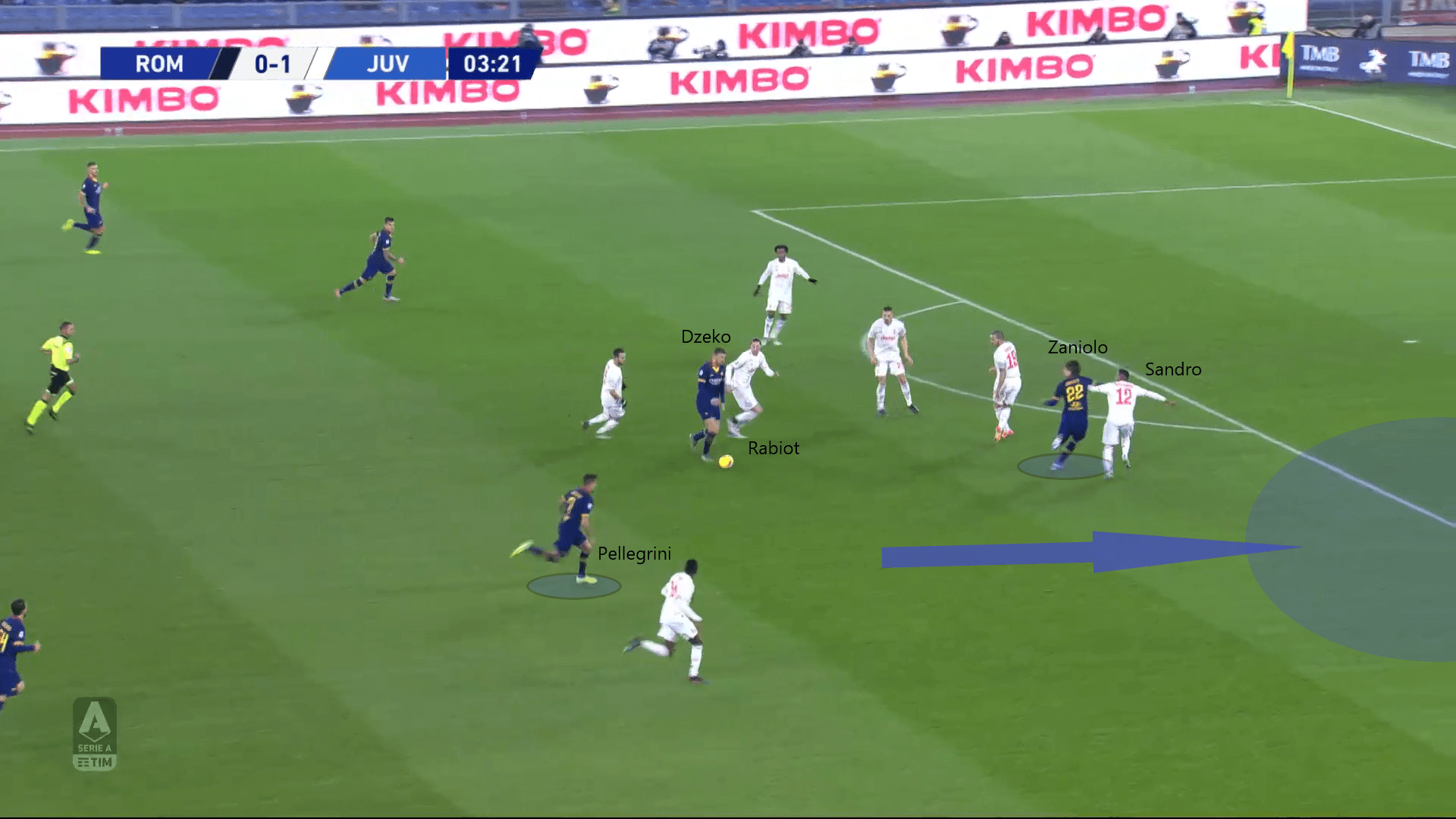 On the left, Roma utilized their strong attacking left-back, Aleksandar Kolarov to provide the width. Roma had 17.2 crosses per 90 minutes, however, in this game, they had 37 crosses. Half of these crosses were from the left channel, 10 from Kolarov and eight from Diego Perotti.

Usually, Kolarov stayed wide and provided freedom for Perotti to roam himself on the pitch. When the two combines, Juventus could not prevent them from crossing. Partly of the reasons was because of the missing of wide players in their formation. Given no winger in Juventus’s starting lineup, the midfielders should protect the wide-area together with the full-backs.

On this occasion, Rabiot was defending with Cuadrado. However, the defensive instructions at the wide-area seemed ambiguous. At the very first time, which Perotti received the ball from Veretout, both Juventus players tried to close him off. They let Kolarov overlapped behind the Argentine, and in the second moment, as shown in this image, Rabiot pointed the Colombian to mark the left-back. However, it was too late, they could not block the cross. 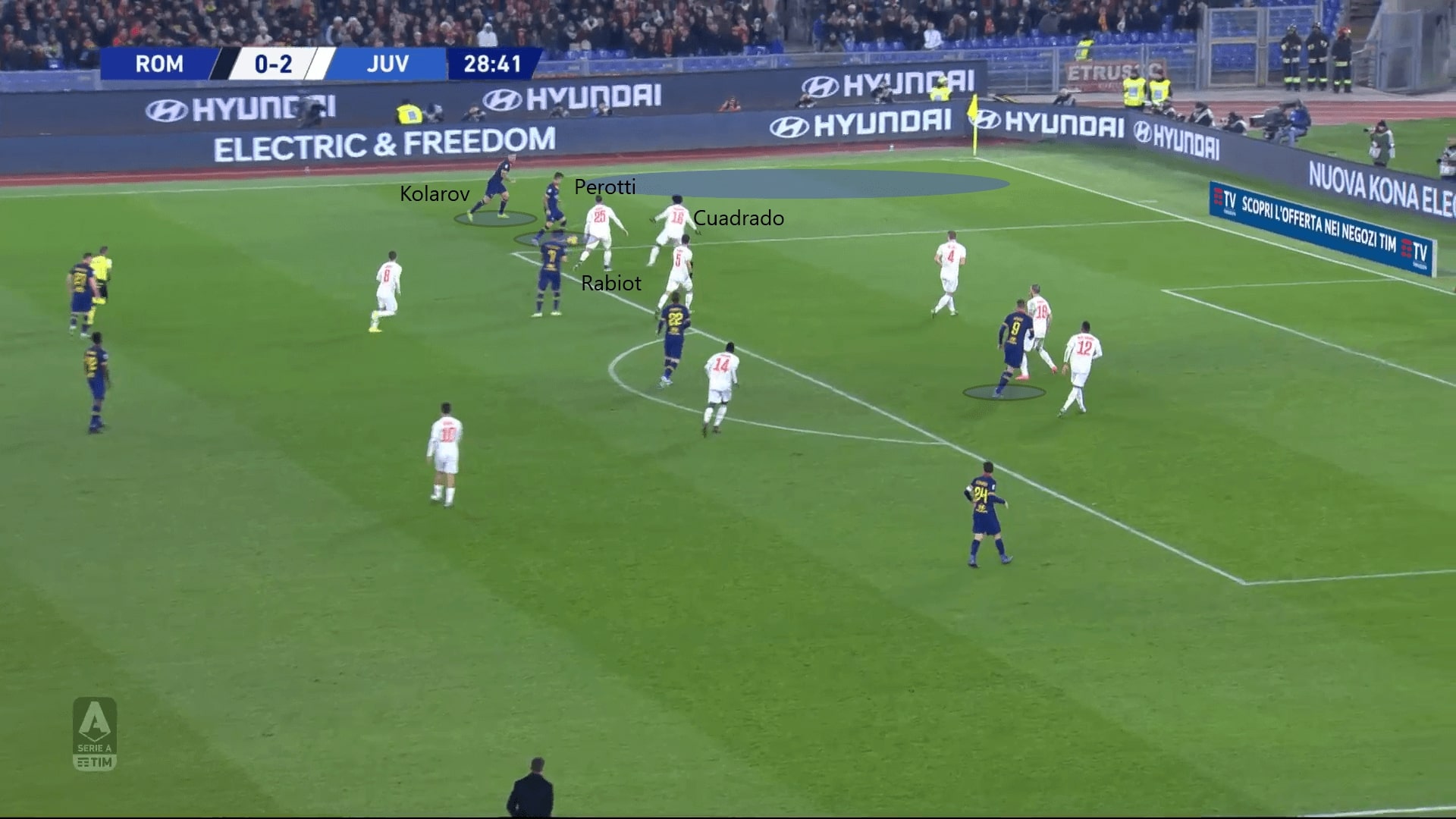 The pressing of Roma

Defensively, Roma also did well if we excluded both defensive errors which led to goals. Although their PPDA was not as good as Juventus (15.29 compared to 13.65), they restricted the number of shots of Juventus into four. Meanwhile, the Serie A winner had 65.42 passes attempted to the final third in this season, it was reduced to 35 in the game, with 24 of them completed.

Roma pressed high on the ball side to achieve several aims. They reduced the room of Juventus’ build-up plays. In general, they committed all their front players in the press, the wingers on the far side would come inside to protect the central area.

Roma’s pressing restricted the number of Juventus lateral passes from 214.84 on average to 154 in the match. They did not want Roma players to exchange passes horizontally, which could possibly stretch the defence of Roma.

As under the below circumstance, Roma pressed high and committed numbers on the ball side. Džeko covered the centre-back to deny a return pass; Perotti was on Cuadrado; Veretout on Ramsey. Diawara somehow stayed between Kolarov and Veretout to control the space behind Ramsey. As Miralem Pjanić’s body orientation restricted his options, he could not pass to Sandro. Though he passed the ball to Ramsey, the instant pressure from Veretout forced the Welsh to return the ball. 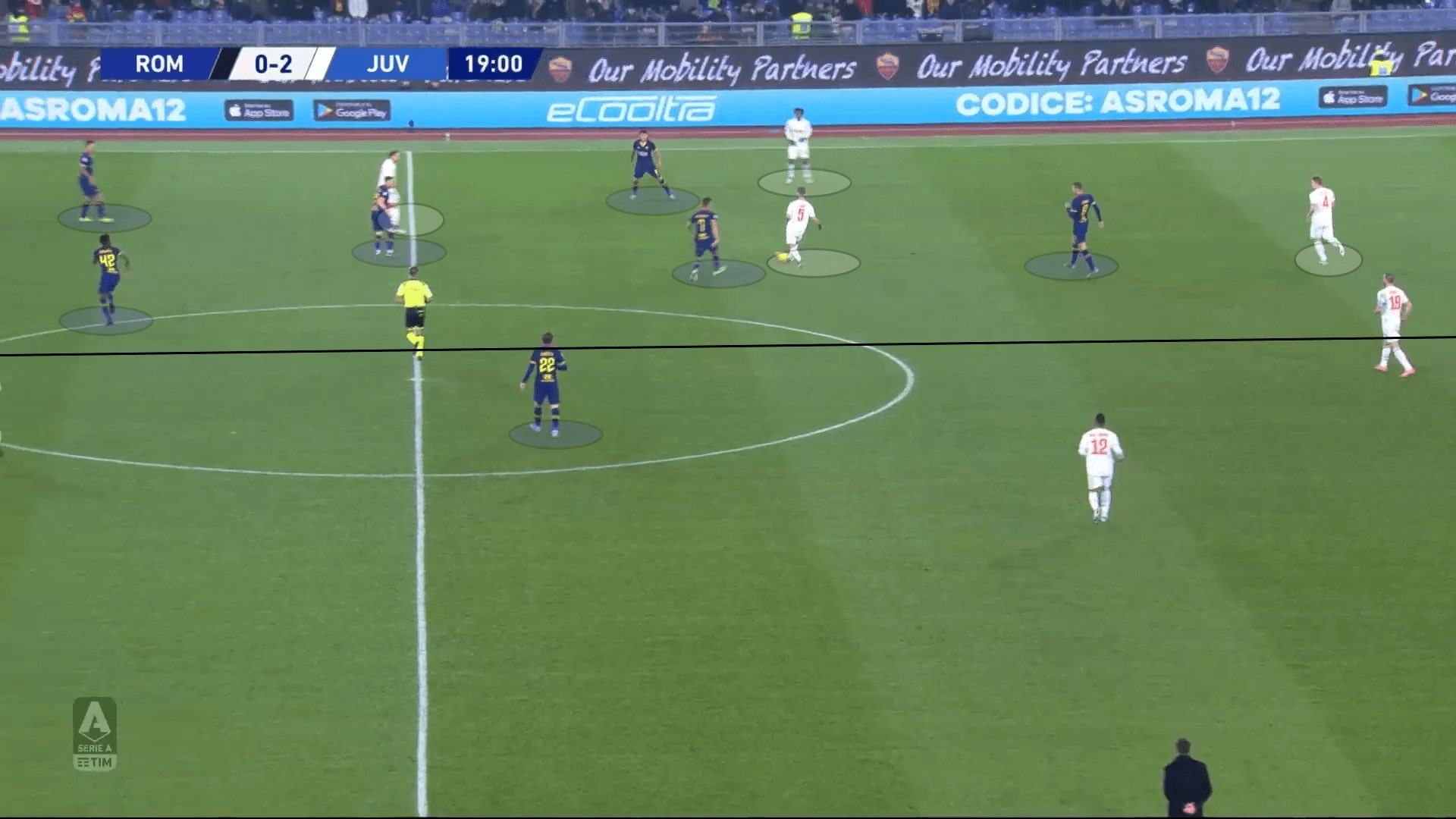 Apart from the pressing, Roma also played a good offside trap to reduce the threat of Juventus. On average, Juventus was caught offside 1.79 times per match, in this match, they were caught seven times.

In hopes of cooperating the press, Roma set a high defensive line. Meanwhile, the Roma players played offside trap to avoid their defence being exposed by players behind them. Since the game plan of Juventus was to create spaces behind players through exchanging passes and inviting pressures, they paid less attention to utilizing the width of the pitch.

Therefore, Roma players could set their offside trap with a compact defensive line. We chose this example to demonstrate. When Sandro played the vertical pass, he could not find Dybala as Diawara was marking the Argentine. He could pass to Matuidi, but Juventus lacked progressive options around the Frenchman. When the Brazilian left-back passed, Mancini signalled his captain, Florenzi to push forward. As a result, Ramsey was caught offside here. 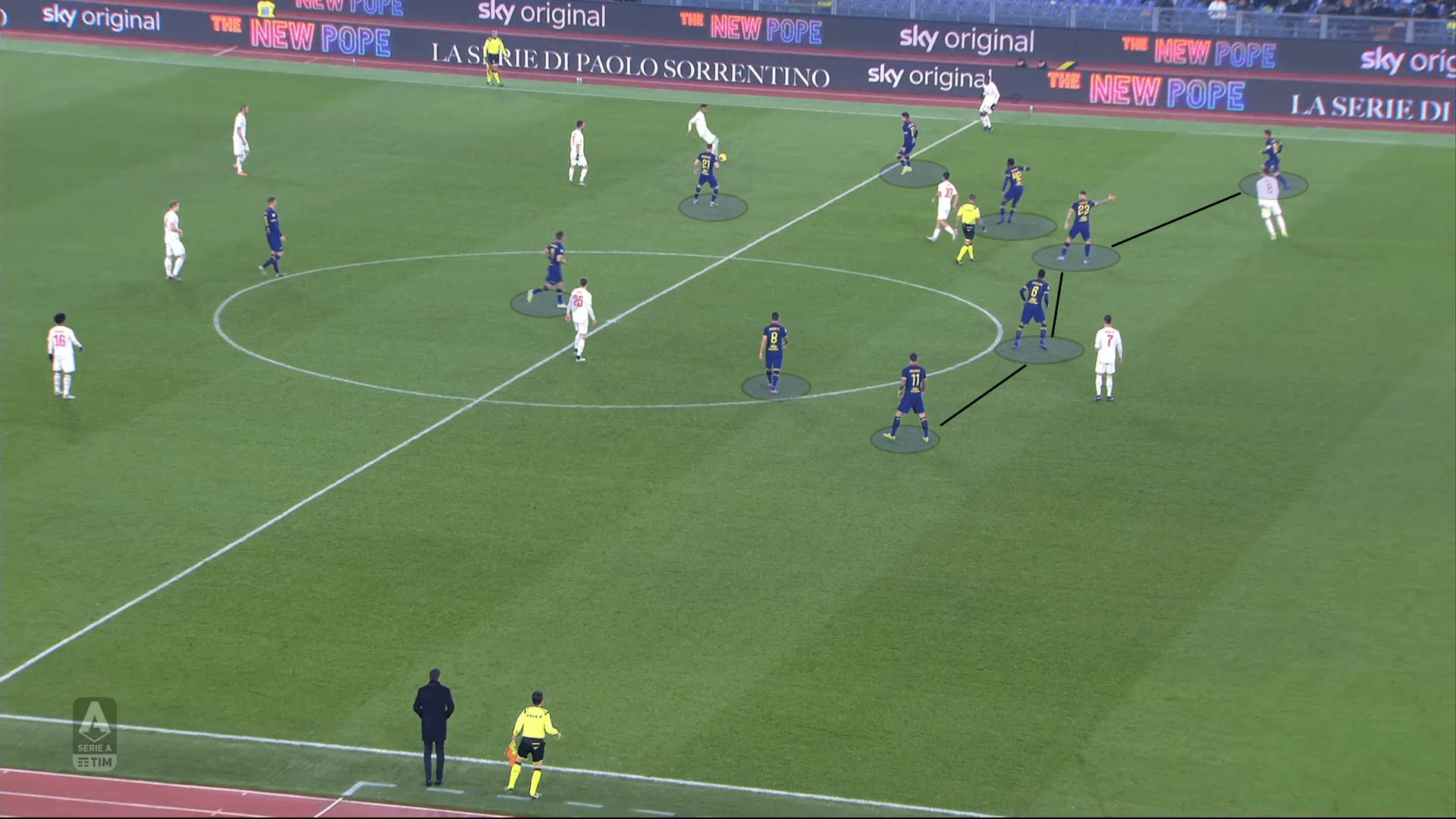 Roma were unfortunate to lose all points. Fonseca and his team prepared well for the game, they showed they can threat Juventus tactically, even though two early individual errors made the game more difficult to them. They need better finishing in front of goal, as their 2.6 xG only converted into one goal only.

Juventus struggled to break the press of Roma, maybe, it was because of their early two goals advantage. They seemed insisted to play vertical passes instead of stretching opposition defence with patience. They were trapped on the ball side, but they did not show their ability to play in a tight area enough. Their strong finishing won them all the points in the match.