In the latest edition of Serie A action, Juventus traveled to the city of Genoa to take on 17th placed Sampdoria in a bid to retake some of the initiative in the title race this season. Against a defence designed by Premier League winner, Claudio Ranieri, Juventus were ultimately triumphant, leaving the game having secured a 2-1 victory away from home.

Our tactical analysis will detail where the game was won and lost for these two sides as Juventus reclaimed their spot at the top of Serie A, at least temporarily. This analysis takes a look at the tactics on display from both managers and illustrates how Juventus were able to put the pressure back on Antonio Conte’s Inter.

Despite previously claiming that his side struggled when playing their three star strikers all at once, Maurizio Sarri opted to front his 4-3-1-2 formation with the trio of Cristiano Ronaldo, Paulo Dybala, and Gonzalo Higuain. Other changes to the side saw Danilo take Juan Cuadrado’s spot at right-back after the Colombian’s suspension and both Merih Demiral and Gianluigi Buffon were rotated into the lineup.

Claudio Ranieri lined up his side in his preferred 4-4-2 formation and made the bold decision to drop last season’s free-scoring phenomenon, Fabio Quagliarella, on the bench. Ranieri was clearly hoping that Gastón Ramírez would provide enough inspiration for his side to secure a result in this game as the likes of Manolo Gabbiadini were also restricted to an appearance off the bench for this game. 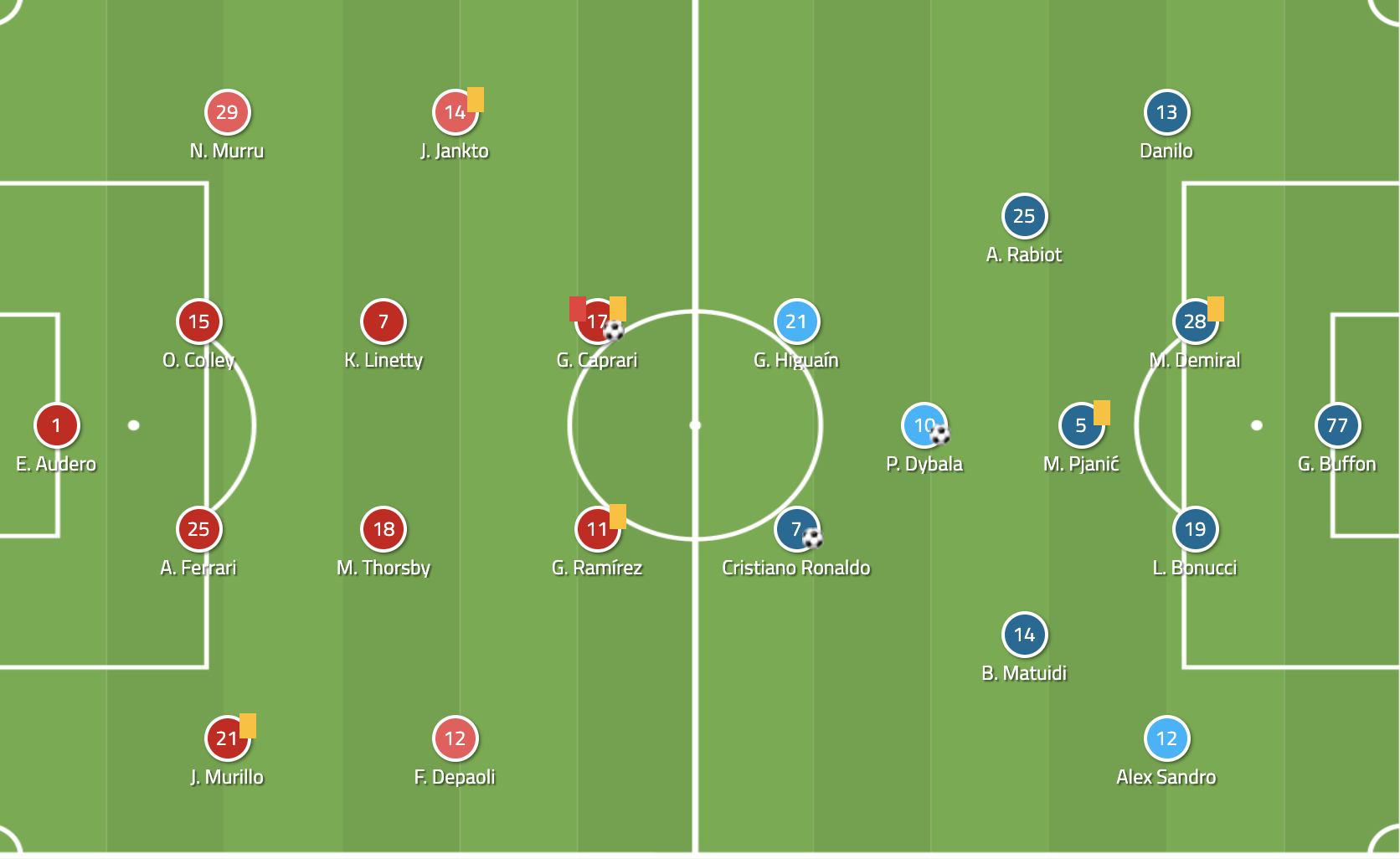 Sampdoria approached this game in typical Ranieri fashion. They adopted a low 4-4-2 defensive block and were only too happy to have Juventus dominate the possession (Juventus finished the game with 71% of the possession). Ranieri has previously been reported as referring to the 4-4-2 as his “castle” which his team will use to defend their goal.

The deep nature of Sampdoria’s formation compelled their players to remain compact which forced Juventus to beat their opponents out on the flanks. As there was no space in the centre for Juventus’ studs to interchange from in-between Sampdoria’s lines, Ronaldo and Dybala were often found drifting wide into space in search of the ball. 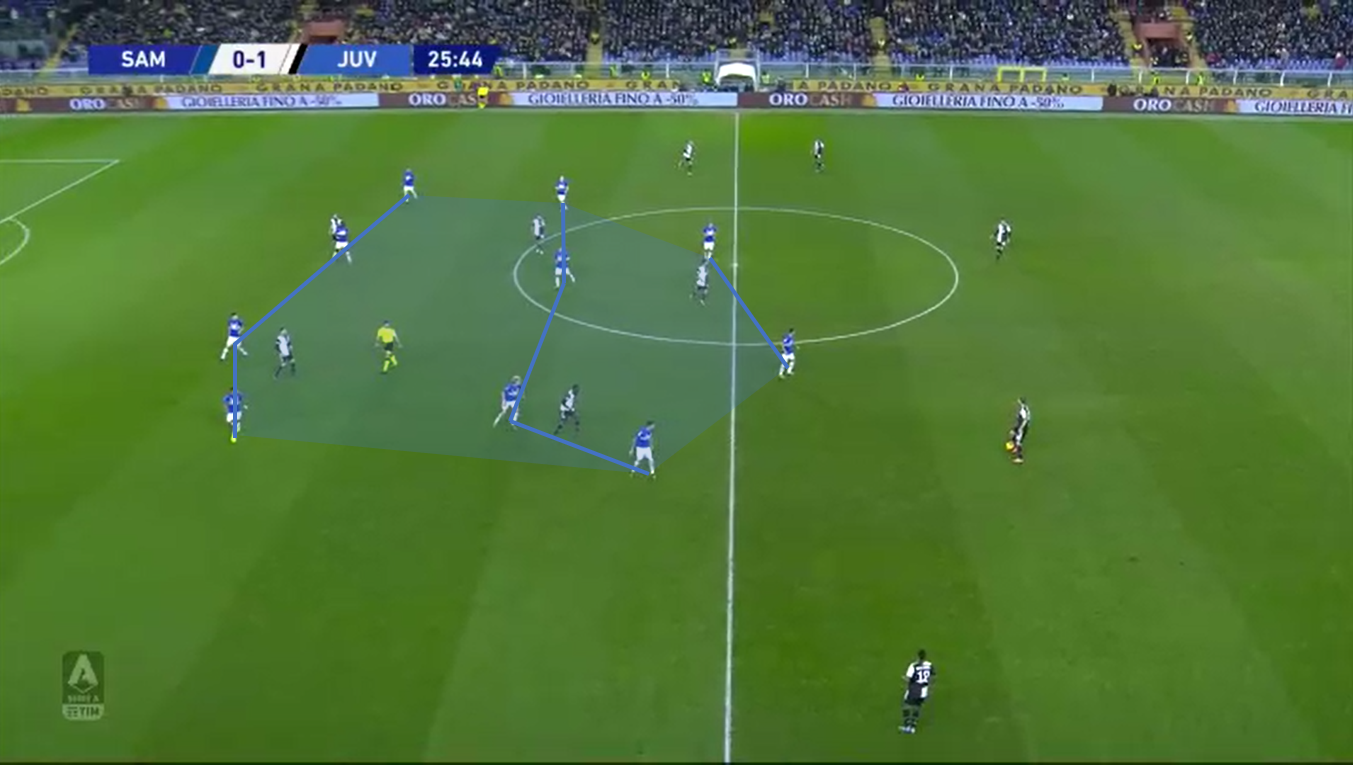 Sampdoria didn’t risk losing their shape by committing significant numbers to press or even attack the opposition. Aware of the speed and talent that Juventus boast, Sampdoria did as much as they could whilst maintaining the core principle of their structure.

The only time Sampdoria actively pressed the ball was when one of the Juventus full-backs received the ball in deeper areas. The home side would respond by pressing the full-back with either their left or right-sided midfielder and showing the full-back to play back inside to their centre-back. This was done to discourage Juventus from progressing the ball vertically down the flanks and challenging their full-backs which could compel other Sampdoria players to focus on the ball and lose track of their shape or the men they were responsible for marking.

Sampdoria’s defence in this game was disciplined and both Ranieri and the players should be commended for that fact. It didn’t work out so well for them, however, when they were able to win the ball.

The folly of not attacking your opposition

What was less encouraging about Sampdoria’s performance was the fact that they rarely committed strong numbers to their attacks. Because Sampdoria were so determined not to lose this game, they didn’t do enough to win it.

Sampdoria’s attacks often broke down due to the lack of options their forward players had on the ball. This often meant crosses almost never had a target and their attackers had to resort to taking more long shots than would be recommended as there was little alternative to help continue the attack.

Sampdoria’s main threat thus came from their set-pieces and what they could muster from the second balls created from their corners. Their only goal of the game came as a result of being in a position to press the ball with numbers during the second phase of a corner as Juventus failed to clear the ball away.

This was an opportunity for Sampdoria to impose themselves on a rotated Juventus backline but their lineup and strategy was far too conservative. Playing against some of the best players in the league and the world, it’s not enough to sit back and allow a side like Juventus to have over 70% possession because their player can create a moment of magic at any moment of the game. Both of Juventus’ goals in this game were evidence for this. Ranieri’s approach was far too timid and that was reflected in his substitutions, with Gabbiaddini having to wait until late on in the second half before seeing the pitch and Quagliarella remaining on the bench for the entirety of the game.

A comfortable afternoon for Juventus

With Sampdoria not interested in pressing the defending champions or leaving their compact 4-4-2, Juventus didn’t have to work hard at all in order to keep the ball. This was the primary reason that Juventus enjoyed so much possession in this game. Such was Sampdoria’s desire to remain disciplined in their shape that Juventus would actively circulate the ball between their back four so as to kill time and rest on the ball.

Juventus didn’t have to opt to use Miralem Pjanić to regularly split the centre-backs to help progress the ball but instead allowed their full-backs to receive the ball deep in an attempt to open up space further down the flanks for Dybala and Ronaldo to rotate into. If they could move the ball quick enough, this would often disrupt the Sampdoria defence just enough to allow one of Juve’s marauding full-backs to receive the ball higher up the field and impact the play.

Whilst Juventus didn’t create a plethora of chances in this game, they were ultimately able to work out two opportunities for Alex Sandro to receive the ball with space to cross the ball in for Juve’s two goals. Dybala’s finish and Ronaldo’s inhuman leap were enough to condemn Sampdoria to another loss this season and it shows just why you can’t sit back and hope for a result to fall your way.

Sampdoria proved that they could have the discipline to defend their ways to a result against lesser opposition which may prove to be a necessity come the end of the season as Ranieri’s side showed little potential in this game for turning their form around. This result should teach these strugglers a lesson however that if they’re to turn their form around, they must lean on their roster of quality attackers and seek to impose themselves more on their opposition in the future.

Juventus will be happy with the result as they didn’t have to play at their best yet their two leading men meant they didn’t have to. Sarri and Juventus fans wouldn’t have learnt too much more about their side in this game but they’ll be delighted that they managed to put the pressure back on Inter ahead of next weekend’s round of Serie A action.