Despite the considerable gaps in quality among the clubs who compete in the FIFA Club World Cup each year, the tactics involved are often thought-provoking regardless, and experimentation has resulted in upsets in the past. When Monterrey faced off against Liverpool in the 2019 Club World Cup, this theme wasn’t far away from reality. The English side edged out the Mexican club 2-1 in a match filled with tactical intrigue. This tactical analysis discusses the attacks of both teams and how the reasons behind why scoreline was closer than expected. 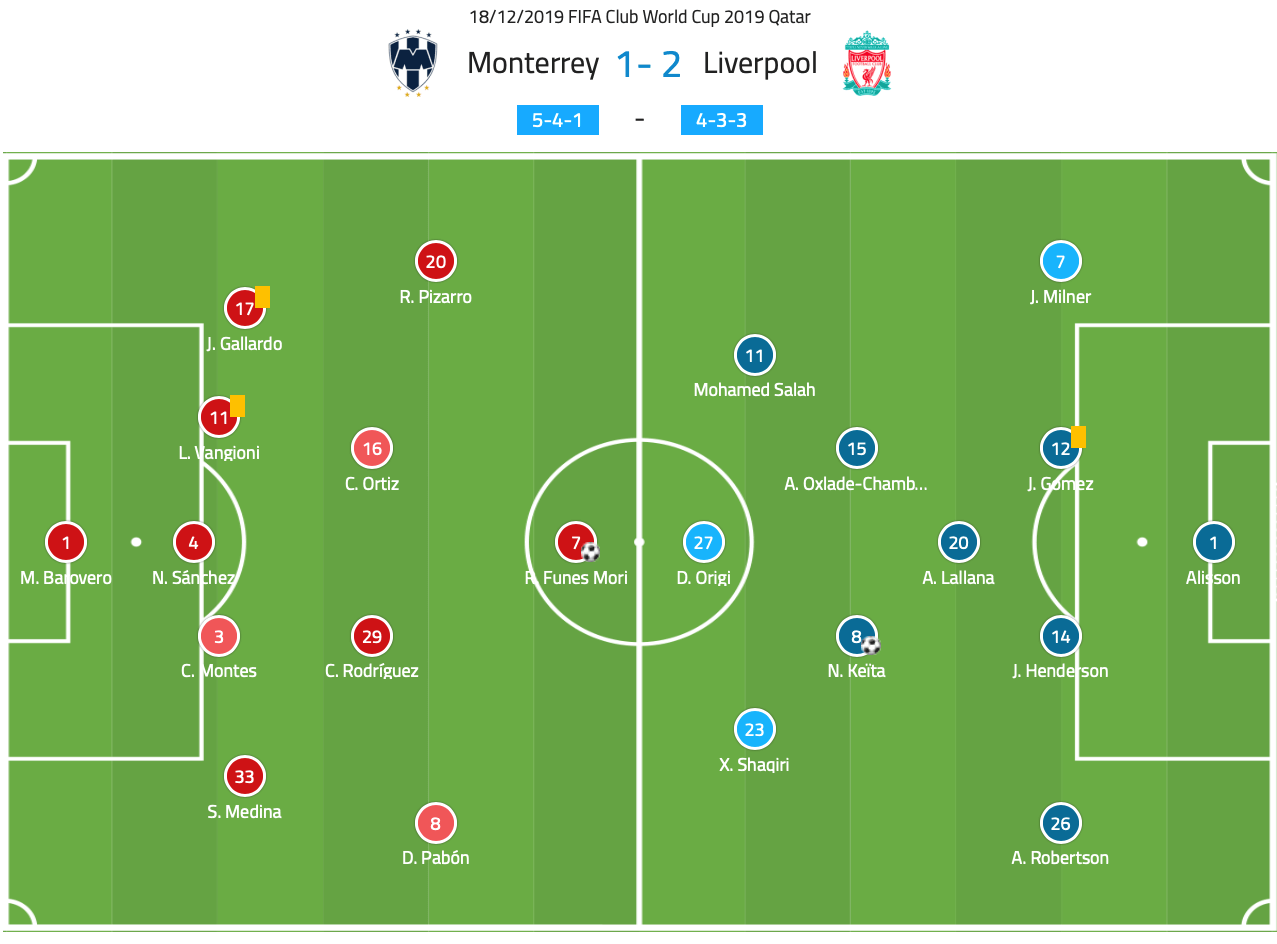 Jürgen Klopp meanwhile opted for a rather unique lineup, most notably placing Jordan Henderson in the back line as a centre-back alongside Joe Gomez. James Milner and Andrew Robertson began as the full-backs. Adam Lallana started the match in the midfield three as the central defensive midfielder; another unexpected placement. Naby Keïta and Alex Oxlade-Chamberlain filled out the midfield line, with a front three of Mohamed Salah, Divock Origi, and Xherdan Shaqiri also starting.

Liverpool were the obvious favourites heading into the match; they were, as is common with the UEFA Champions League winner in the Club World Cup, the more overall talented side. With that in mind, the Reds were prepared to control possession for a majority of the match. Using what would be 68% of the possession, Liverpool planned on allowing pressure from Monterrey to push forward. 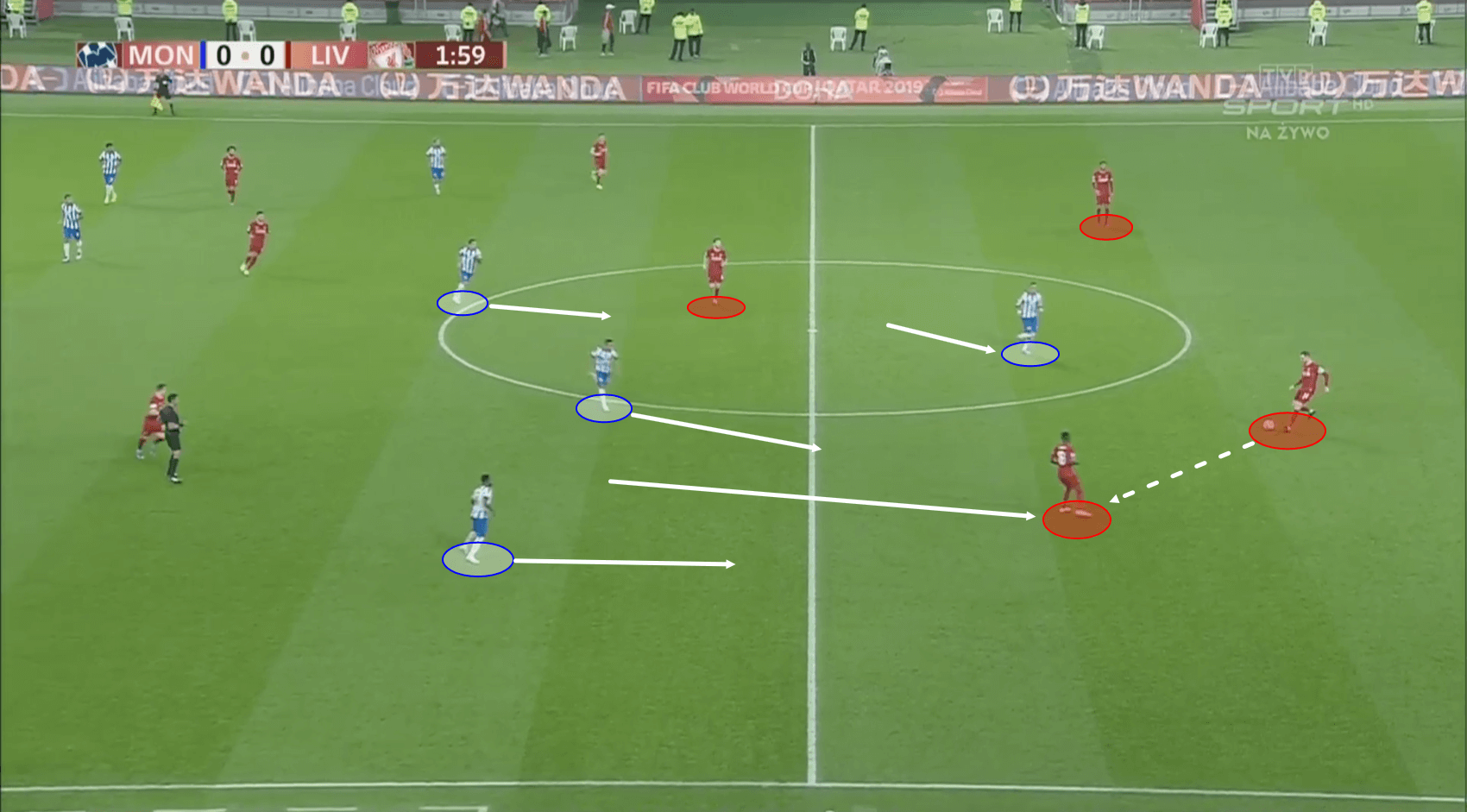 Here, with possession in the back line, Keïta drops back from his 8 position to receive the ball.  This drop in positioning influences Monterrey’s front lines to press forward. The idea behind this is that with Monterrey’s lines forward, Liverpool would be able to find space past that line to exploit. 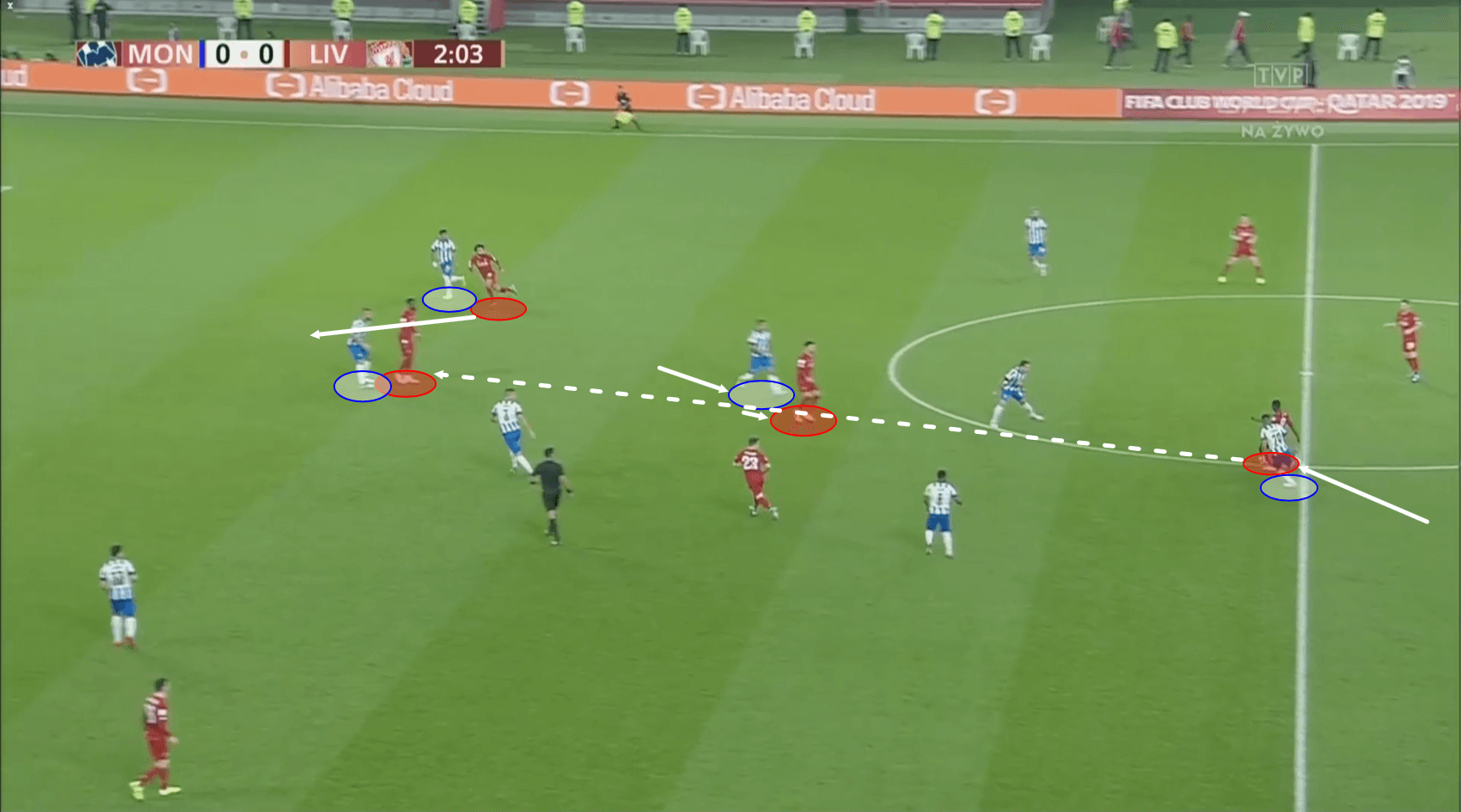 Following the reception of the pass, Keïta is able to use his excellent dribbling ability to turn and reach an area just behind the front line to have space going forward. Additionally, Oxlade-Chamberlain’s movement towards Keïta pulls his defender forward, giving the Guinean midfielder space to target on a long ball past the remaining Monterrey lines. This specific case above reaches the feet of Origi, and regardless of whether it was a deflected pass intended for Salah or part of a holdup tactic, the buildup concept was similar for Liverpool for much of the match. 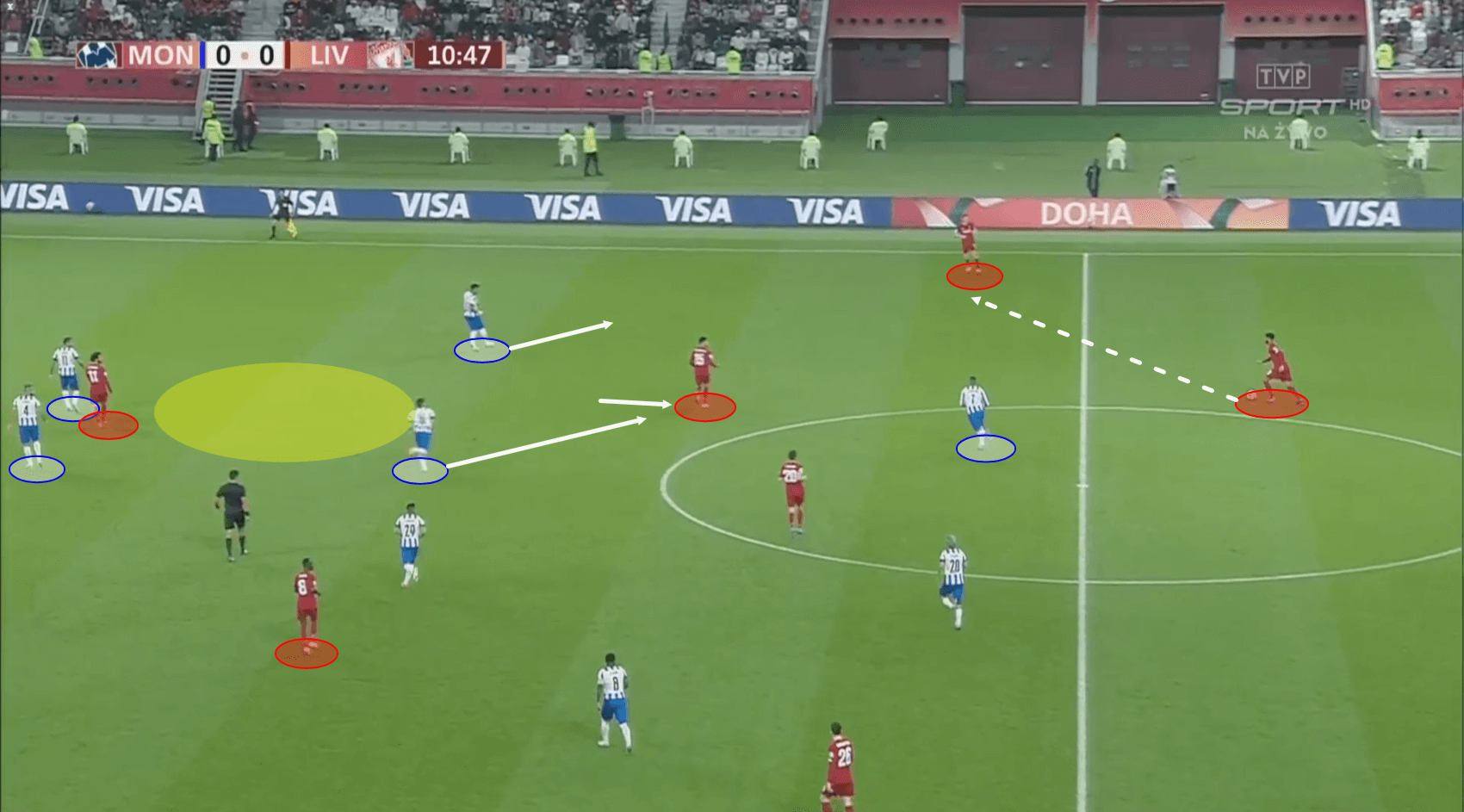 Again in possession within the back line, a pass from the Gomez to Milner triggers Monterrey’s front lines to put pressure on going forward. The two ball-side midfielders both press the receiver in Milner and a potential passing outlet in Oxlade-Chamberlain. This leaves space behind them for Salah to comfortably receive an aggressive pass. 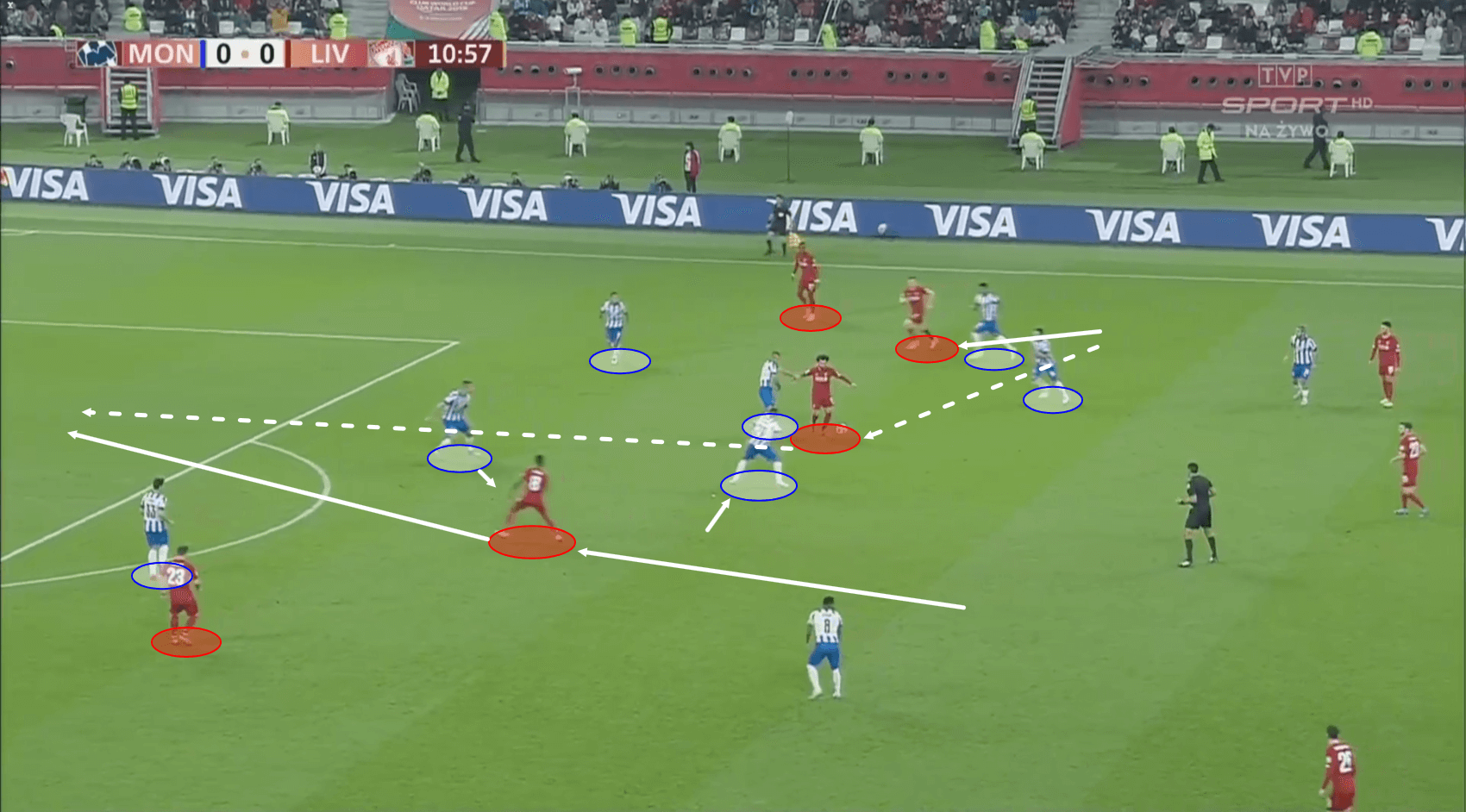 Upon receiving the pass, Salah uses his strong holdup play to not only draw in the opposition but also to allow Keïta enough time to complete his run past the ball-watching midfielder into a dangerous area. The Egyptian was able to complete an accurate through-ball past the centre-back onto Keïta’s run, and the midfielder scored his third goal in his past three consecutive matches in all competitions.

While Liverpool continued this method of attack for most of the match, Monterrey’s defensive lines were more often than not able to tackle the ball away in a physical manner. Once on the ball, the Rayados attacked quickly, targeting and taking advantage of the weak or inexperienced points in Liverpool’s defending. 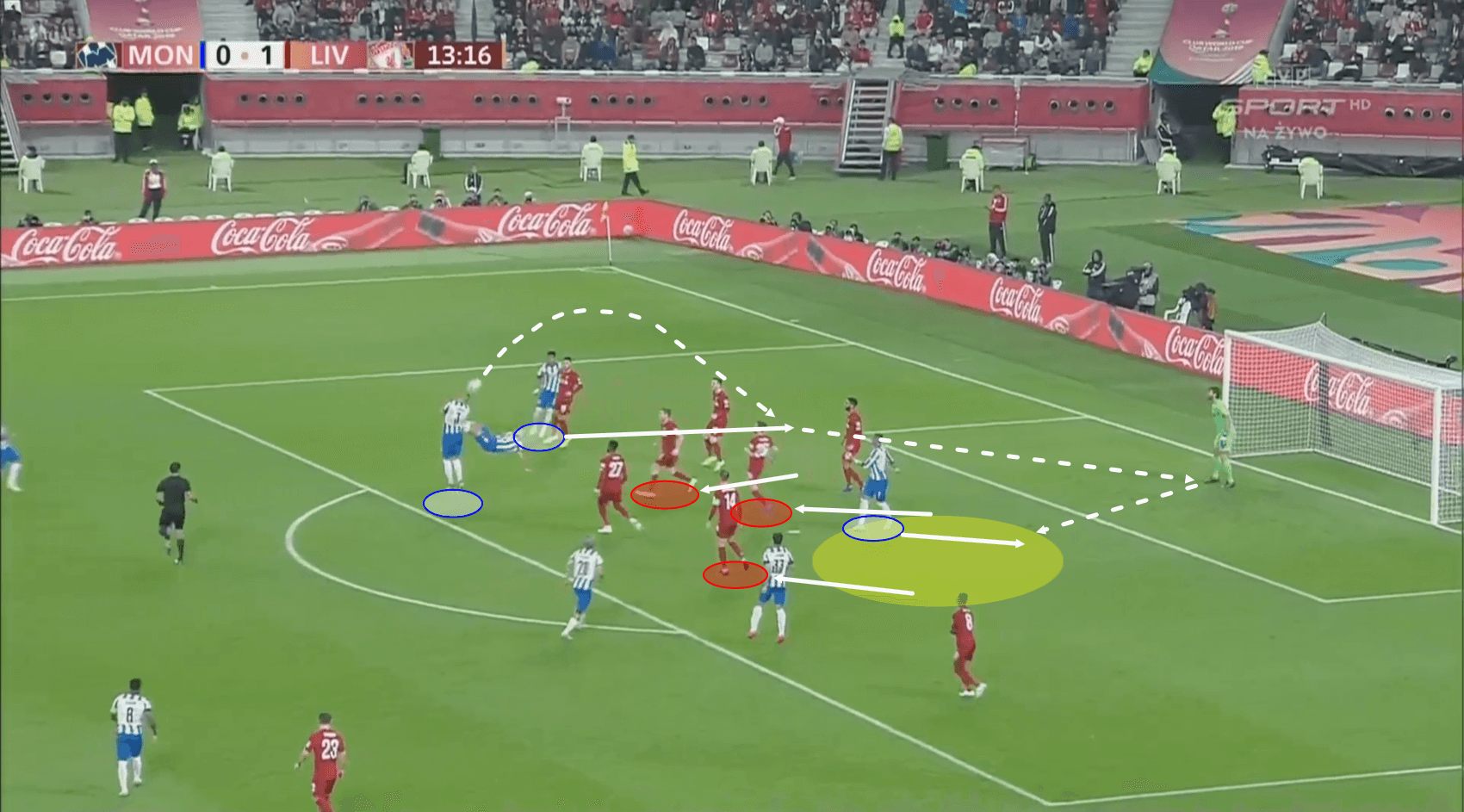 Monterrey responded shortly after Liverpool’s goal with a goal of their own. After earning a free kick using their aggressive front press, Monterrey had an aerial ball in the box. All three of Milner, Henderson, and Lallana- all playing in defensive positions this match- pushed higher in the box towards the ball. Montes was easily able to header it over the compact defensive crowd to his teammate down the left side. The shot was saved by Alisson who performed well, but it rebounded nicely to Funes Mori in open space in front of the six-yard box for an easy finish. 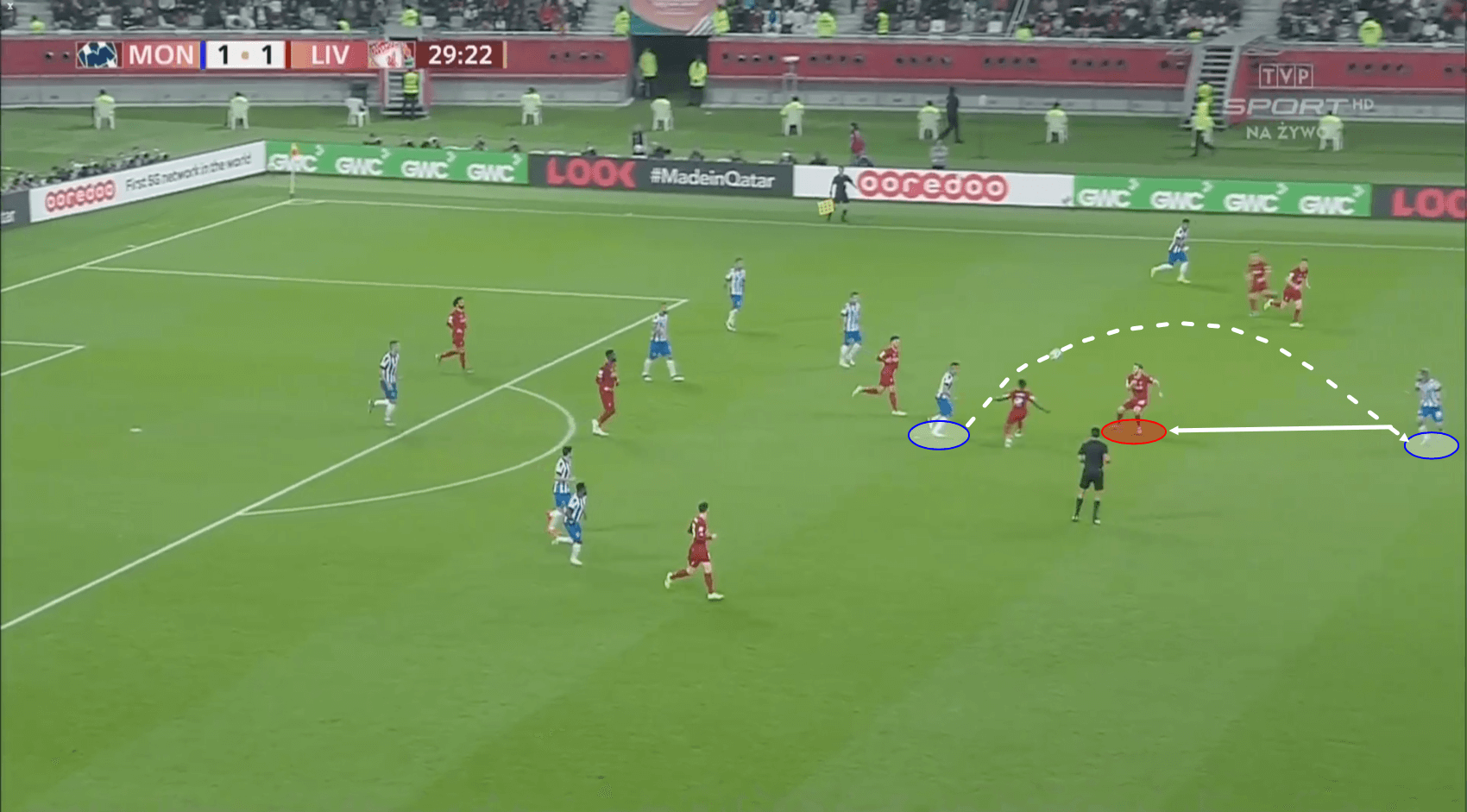 In this example, Lallana is caught too far forward for a defensive midfielder, and Rodriguez is able to lightly loft the ball over him to Pizarro, who is then fouled by Gomez in order to stop the counter-attack. Occasionally Lallana or Henderson were able to successfully complete an interception or execute an offside trap, but mostly their positioning was unpolished. 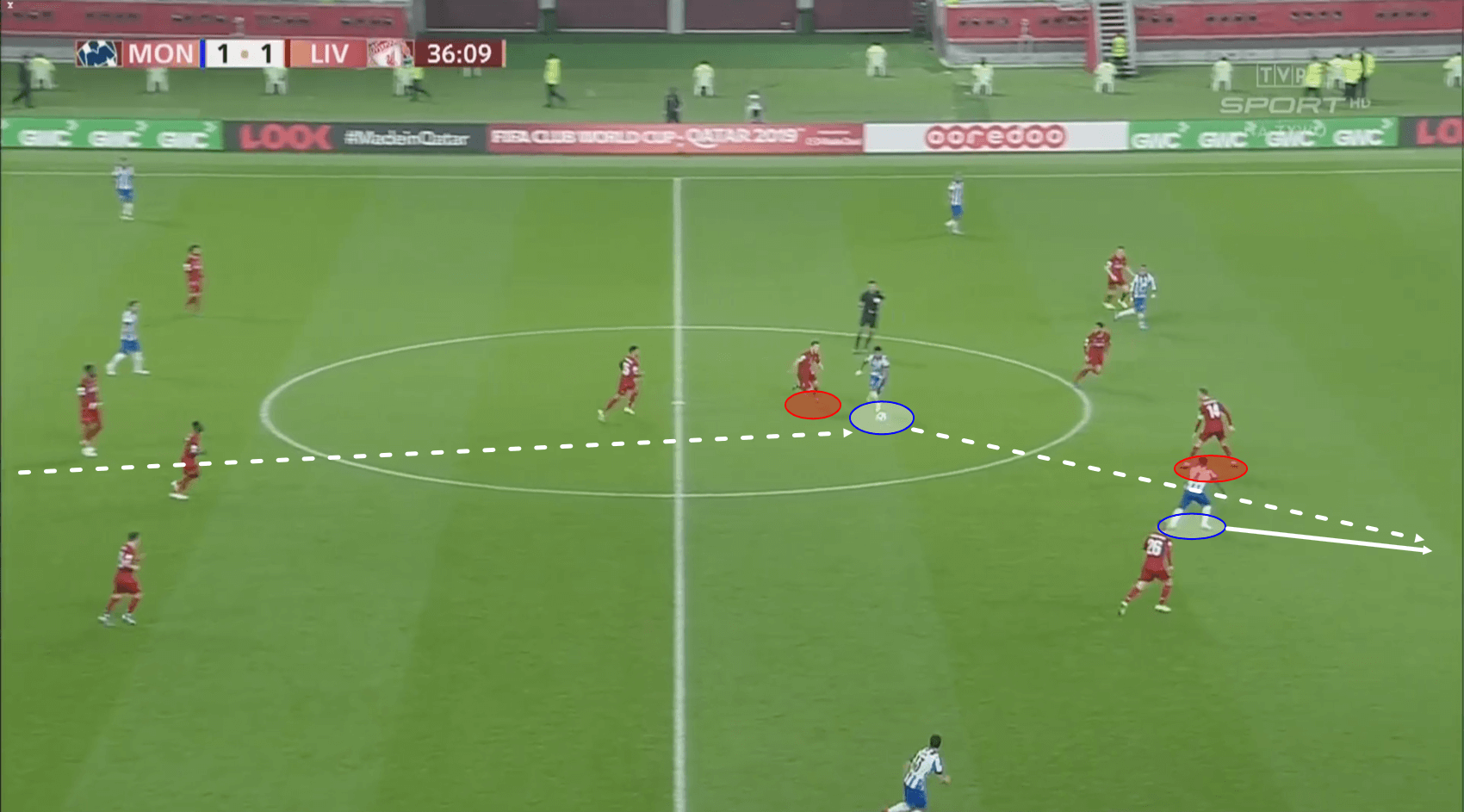 Here we again see Lallana too far forward instead of covering the attacking midfielder. Gallardo receives a pass and turns quickly to continue the direct attack by completing a pass to Pabón. Henderson is too late to pull forward on the offside trap, and Pabón nearly ends up with an assist on this play.

Whether this is the players’ faults for being out of position or the manager’s fault for playing them in an unfamiliar position is debatable, but Klopp isn’t typically a coach who so quickly changes his tactical game model. It wasn’t until much later in the match that Liverpool began to overpower Monterrey.

In the final thirty minutes or so of match time, Klopp subbed on three players who traditionally start for Liverpool; Sadio Mané, Trent Alexander-Arnold, and Roberto Firmino. Only one of these was a defensive substitution, but the skill level of the three incoming players meant Liverpool were more in control on and off the ball. 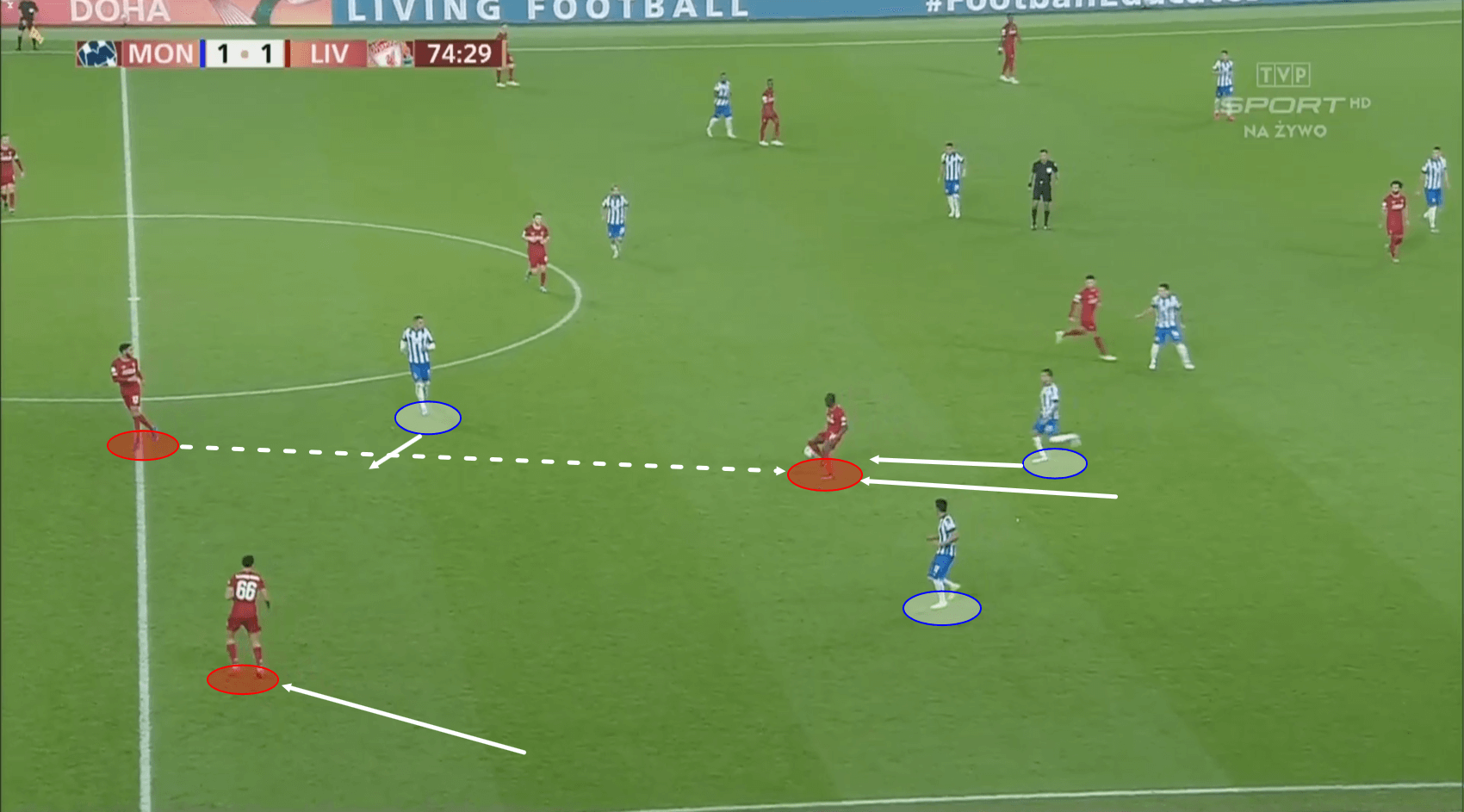 Liverpool controlled more possession once these three came on. In this scenario, Mané drops back to receive a pass from Gomez. Instead of pushing forward, risking a gap on the right touch-line, Alexander-Arnold drops back into that open space to become a passing outlet with Mané immediately under pressure and to prevent any potential counter-attack should the opposing press succeed.

Eventually the efforts of Liverpool’s top players in the waning minutes, along with Monterrey’s change to more defensive tactics, resulted in the match-winning goal. 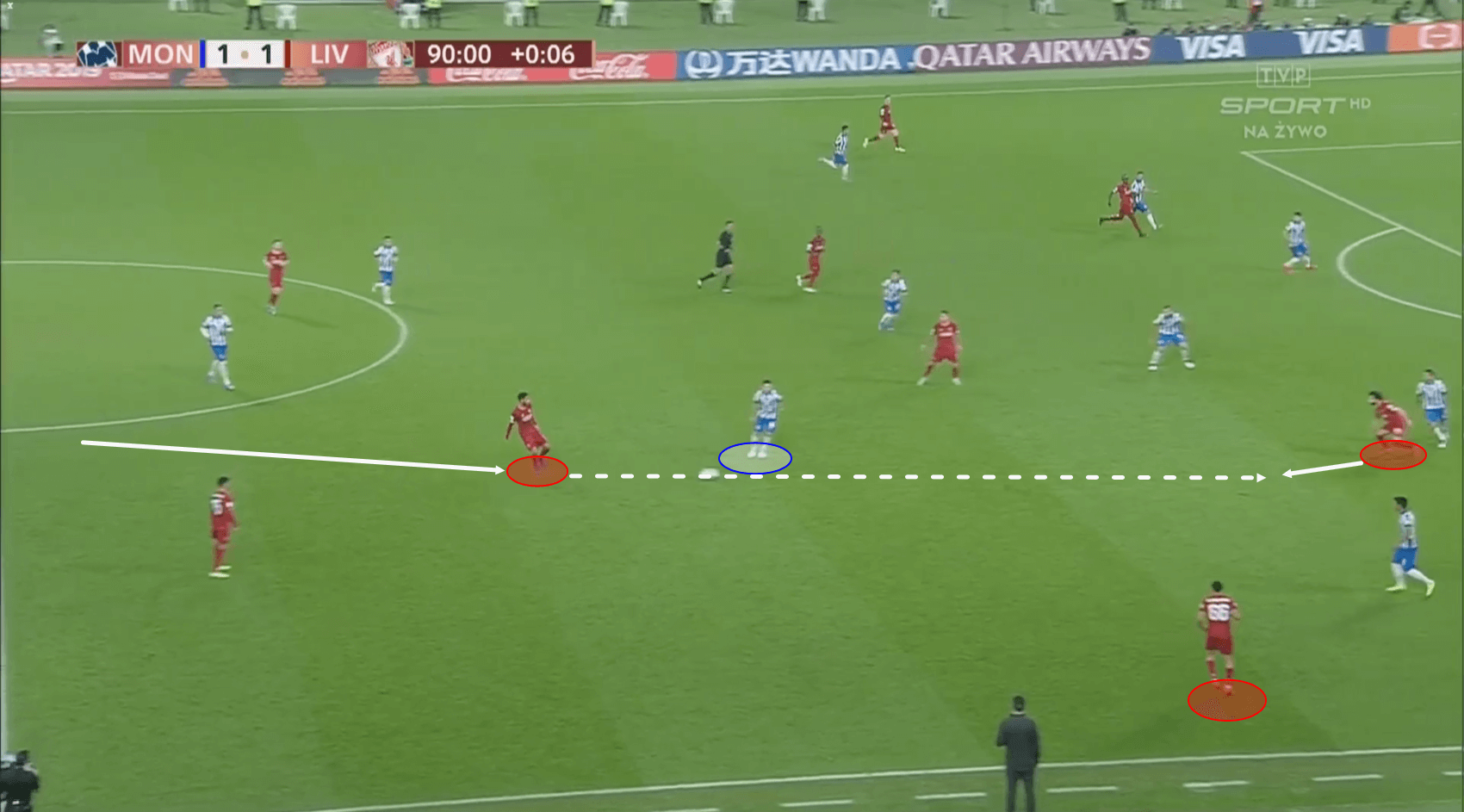 Late in the match, with Monterrey pressing less and defending in their own half, Gomez was able to carry the ball well past the halfway line and nearly into the final third. Salah dropped back to receive a forward pass. 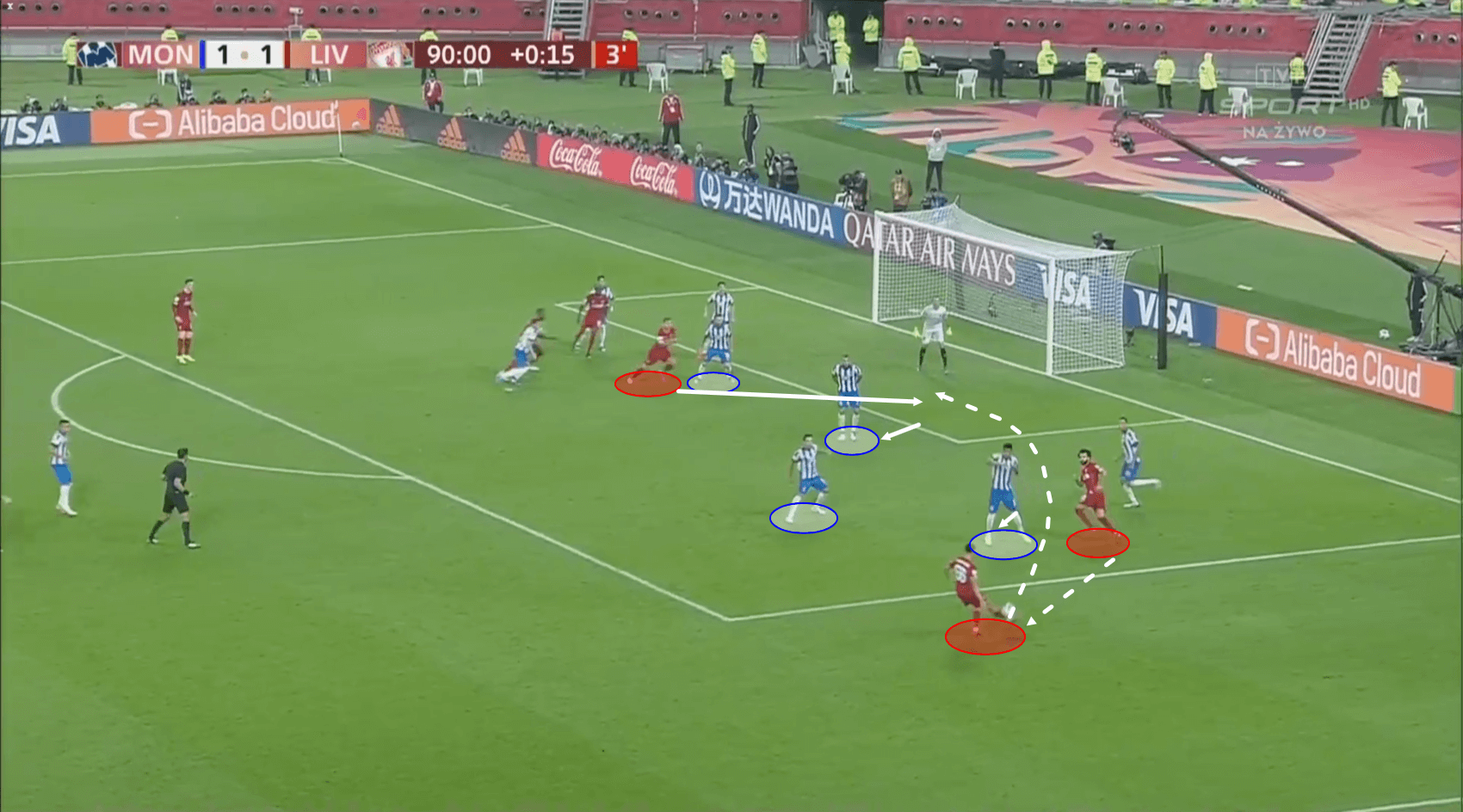 After fending off the pressure deep in attacking territory, Salah managed to complete a pass back to Alexander-Arnold, who was also able to position himself farther forward thanks to Monterrey’s more conservative play. The slight backpass was enough to lure Monterrey’s low block forward just enough for Firmino to sneak behind ball-side centre-back. Alexander-Arnold’s passing ability, along with Firmino’s intelligent spatial movements, gave Liverpool the win.

Even with the one-goal victory, Liverpool were somewhat fortunate not to at the very least have extra time on their hands, upon further analysis. The xGs of both sides were exceptionally close; 1.63 for Liverpool to 1.73 for Monterrey. But it is of course not uncommon for a single moment to directly affect the outcome of a match.

Liverpool came into the match with a questionable lineup, and paired with Monterrey’s strong preparation, the underdogs kept the contest close. Despite multiple positive moments, the gap in quality was simply too large for Monterrey once Klopp brought on the three regular starters. The CONCACAF Champions League-winning side will now play in the match for third place against Al-Hilal before flying back home for the Liga MX Apertura Final. Liverpool will face off against Brazilian powerhouse Flamengo on Saturday and have a chance to win their first-ever Club World Cup after losing the 2005 edition 1-0 to São Paulo.