New season, fresh hope and great expectations. The Premier League’s final game of the round upon its highly-anticipated return saw West Ham United host champions Man City at the London Stadium. This fixture has proven to be a frustrating one for Pep Guardiola‘s side over the past two campaigns, with both occasions ending as draws. City particularly struggled in last season’s contest back in May, salvaging a 2-2 result after going down 2-0, a point that ultimately helped them see off Liverpool and clinch their fourth title in five years.

David Moyes and the West Ham faithful were hoping for more of the same, but Guardiola’s tactical adjustments from the previous meeting caught the Hammers boss off-guard as City swept the home team aside. Pep introduced a new system that West Ham did not anticipate and simply could not cope with.

It was debutant Erling Haaland who bagged both goals to introduce himself in style and send shockwaves around the country. The link-up play between the Norwegian striker and Kevin De Bruyne was devastating. The tweet from De Bruyne post-match was equally as powerful: “Premier League, welcome to Erling Haaland!”

This tactical analysis will look at the tactics adopted by Man City on Sunday afternoon. The analysis will highlight how City’s positioning and direct approach dismantled their opponents as they cruised to an impressive opening day victory. 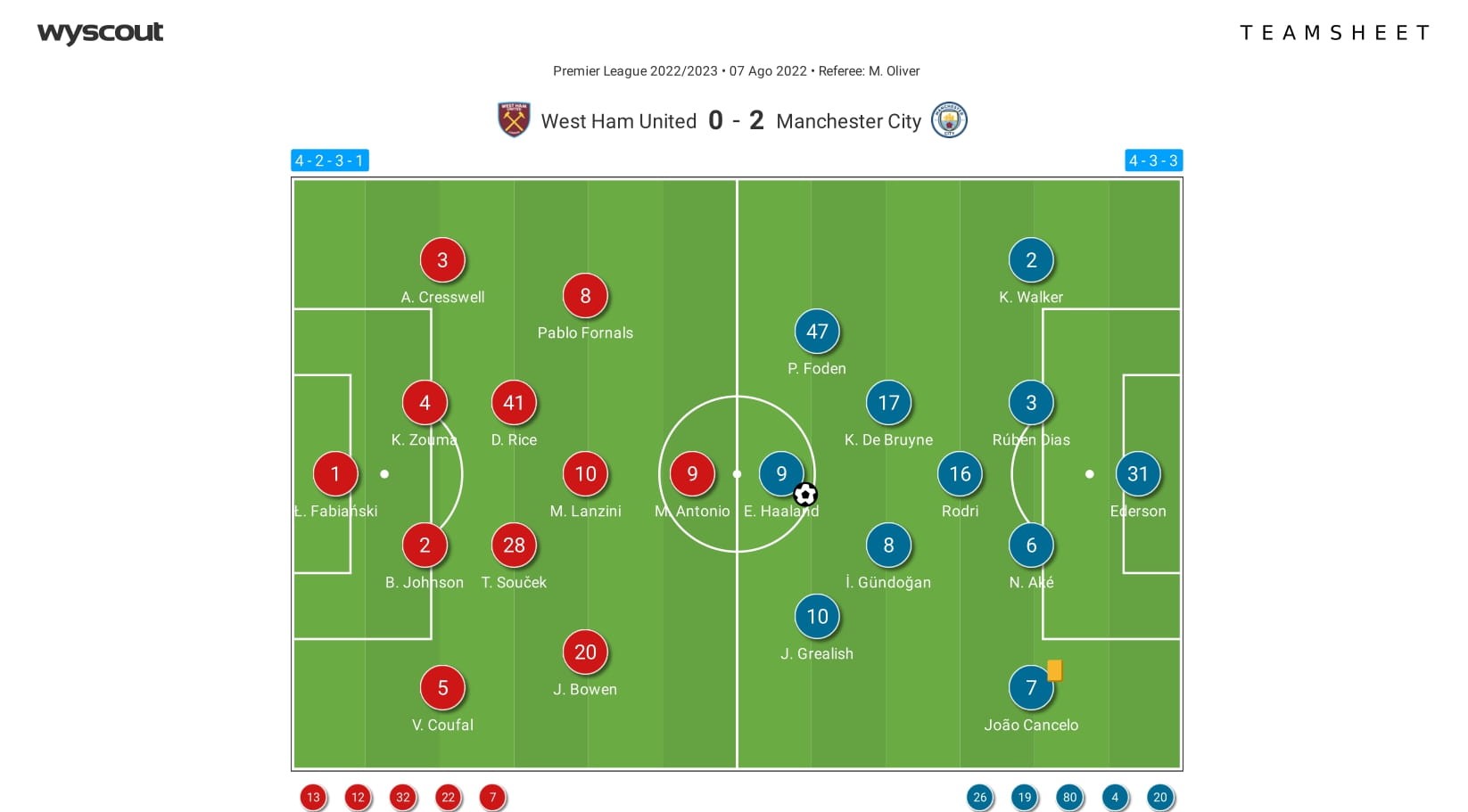 Beginning with the hosts, West Ham played in a 4-2-3-1 formation that we mostly saw last season. Łukasz Fabiański started between the posts but was replaced by Alphonse Areola after picking up an injury in the first half. Craig Dawson and Angelo Ogbonna missed out with injuries which meant that Ben Johnson played alongside Kurt Zouma at centre-back. Michail Antonio lead the line with new signing Gianluca Scamacca only making the bench.

On paper, City played in their usual 4-3-3 system with İlkay Gündoğan and Phil Foden replacing Bernardo Silva and Riyad Mahrez from last weekend’s Community Shield defeat at the King Power Stadium. Erling Haaland started up front, making his Premier League debut. On the pitch, however, Pep’s men lined up in a 2-3-4-1 system for big chunks of the game. Kyle Walker and João Cancelo dropped inside to form a midfield trio with Rodri, while Gündoğan and De Bruyne pushed up into the half-spaces to support Haaland. Jack Grealish and Phil Foden were tasked with providing the width.

From the get-go, City dominated the ball and the 2-3-4-1 formation was clear to see. At times during last season, Cancelo and Walker were used as inverted full-backs, but never to the extent where they both dropped into midfield at the same time and for the entirety of a game. Gündoğan and De Bruyne were positioned extremely high and aggressively in and around the striker, with Foden and Grealish often dropping off to receive on the flanks. 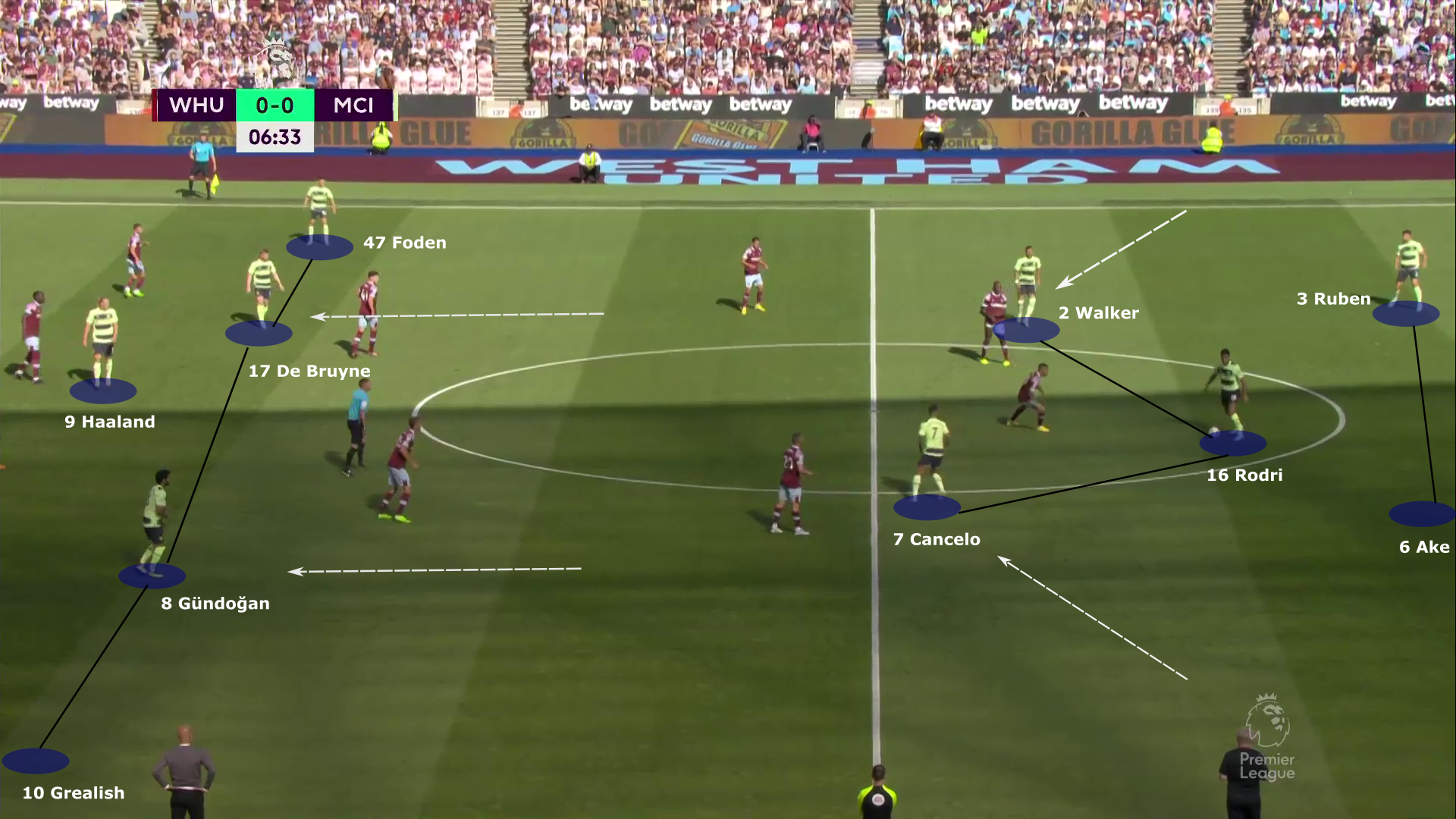 Pep played his two full-backs so narrow for several reasons. Firstly, Dias and Aké are not the most comfortable defenders on the ball, nor are they the most expansive of passers like Stones or Laporte. Bringing Cancelo and Walker inside gifts them more short passing options. It also forces West Ham’s wingers to move inside while defending to cover the inverted full-backs as can be seen above. This provides Rodri with time on the ball to dictate and progress play. The Spaniard played an instrumental role in dropping between his centre-backs and keeping things ticking.

Secondly, making the Hammers defend so narrow from the front exposes the flanks and sets up Grealish or Foden for a 1v1 with the full-back. 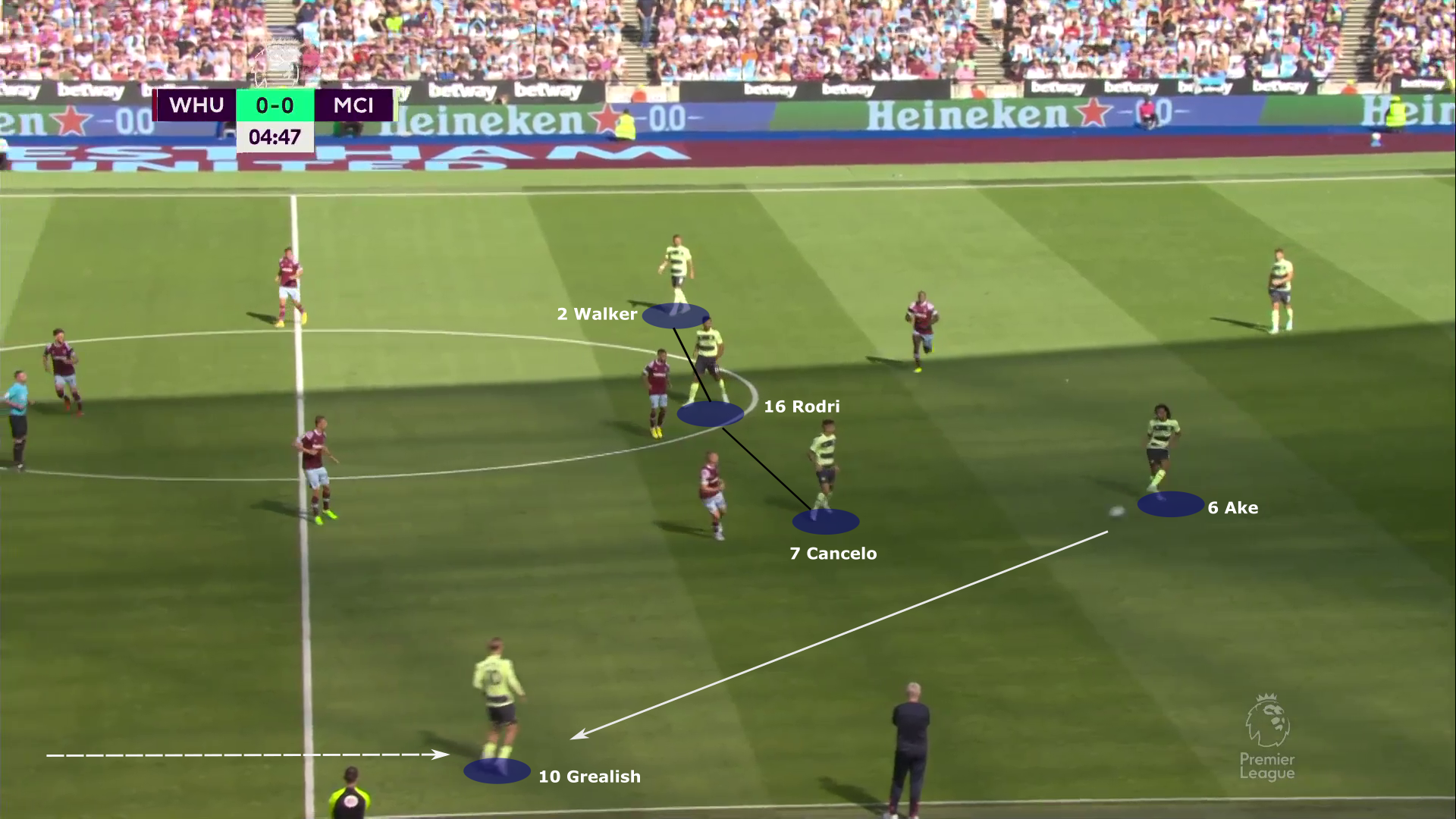 Thirdly, adopting this tactic prevents West Ham from launching counterattacks. City easily dealt with this threat by overloading the midfield. The three City midfielders covered Fornals, Lanzini and Bowen while Dias harassed and man-marked Antonio all over the pitch to wear down his powerful hold-up play.

An important element of how City broke down their opponents was their constant and smart off-the-ball movements, particularly with Gündoğan and Cancelo. This set-up created great potential for interchanges that dismantled defenders, leading to gaps being consequently formed. 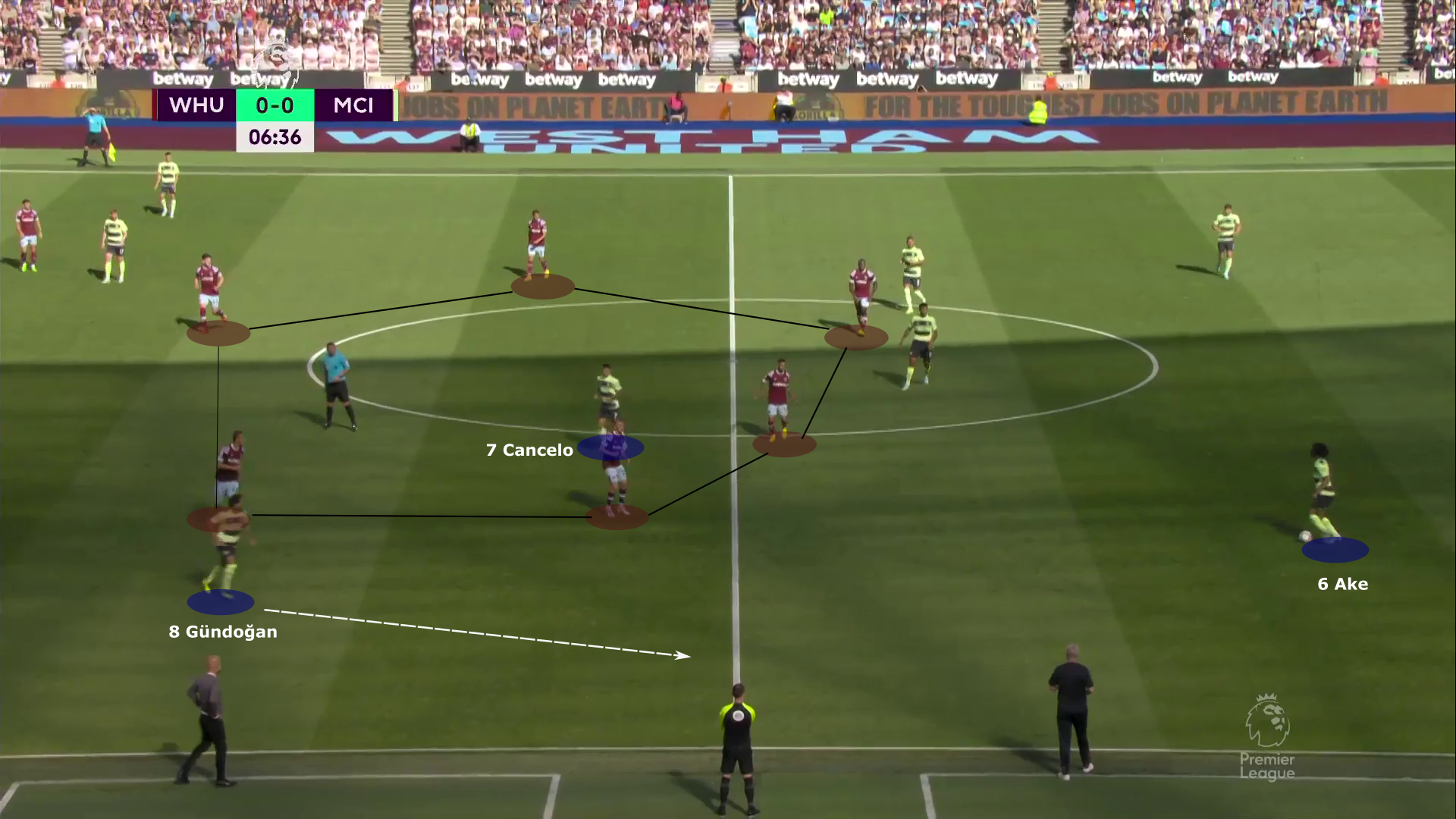 Gündoğan was the perfect player for this role. He makes a move into the wide space and uses Cancelo as a foil inside a host of West Ham players. The main goal is to get the ball into Grealish’s feet higher up the pitch where he can cause damage. 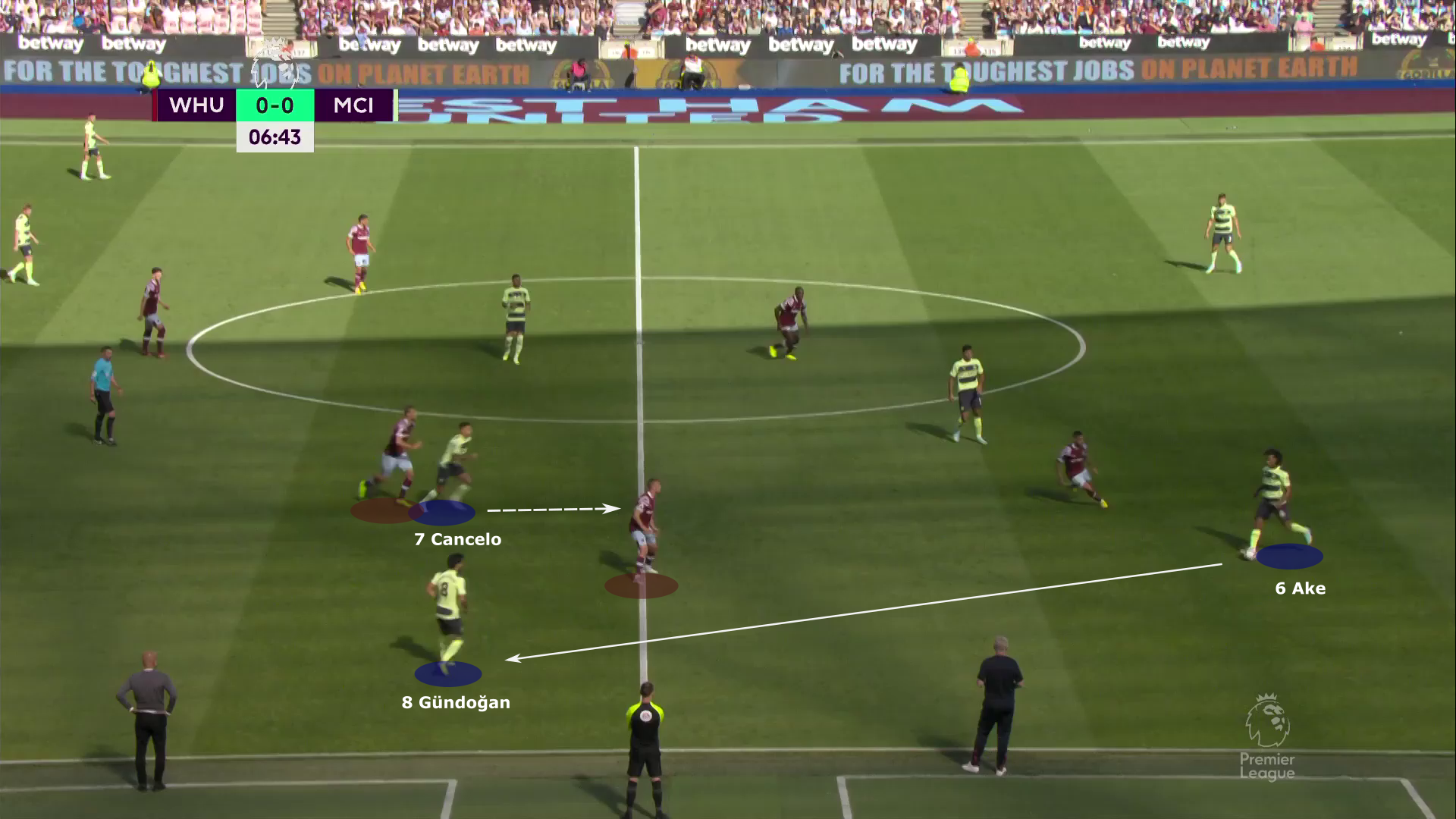 The German midfielder receives Aké’s pass behind Bowen, around halfway. Notice Cancelo’s run to drag Souček in and free up the space for Gündoğan. 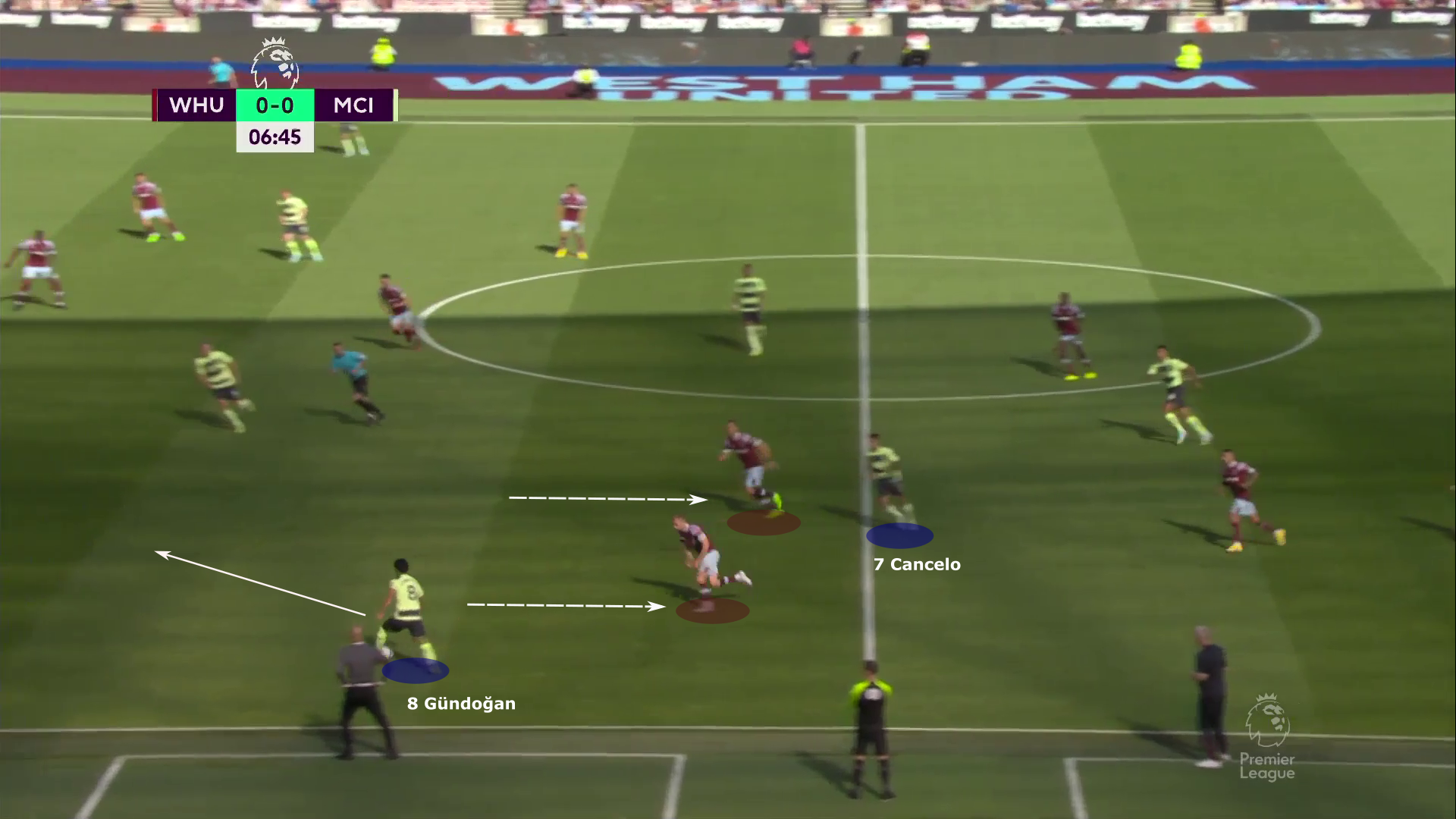 Gündoğan can run into space, as the defenders are now both behind the ball. 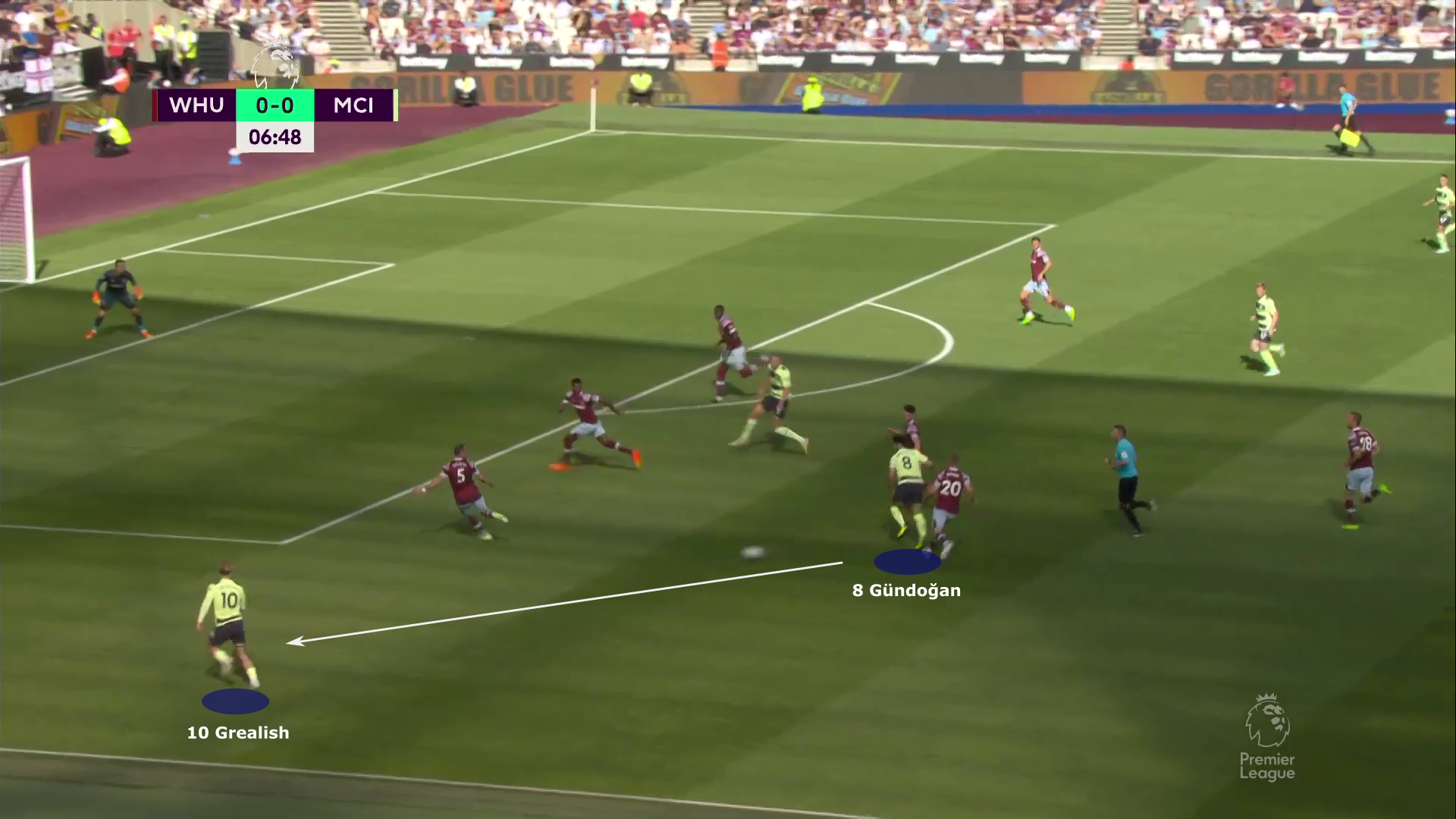 He glides through to then play the ball out to Grealish and isolate him against Coufal.

The pass maps below showcase City’s territorial dominance as well as their average positions on the pitch in which the 2-3-4-1 formation is evident.

Moyes admitted his side had been outclassed by City. “They were so good. I felt that tactically they completely outdid us today. They played differently than at the end of last season with both full-backs in the middle of the pitch like midfielders. We hadn’t prepped for that because we hadn’t seen it.”

Cancelo was one of the best performers on the pitch on Sunday. He completed 108 passes and 4 dribbles during the game, the most by any player. His action map displays his all-around involvement on the left side and in the middle of the park.

City’s new number 7 is one of the most influential players in Guardiola’s system. He possesses a great sense of instinctive awareness and positioning. Backing his exploits going forward with a faultless defensive display, he was nothing short of superb on the day.

For all the praise heaped on City for their complexity, they often kill opponents through the simple ideas and passes which look so easy on the eye. This is one of the toughest skills for a team to achieve: executing the simple to perfection.

Dias is on the ball, and Cancelo makes the run to create the space in behind for his teammate. 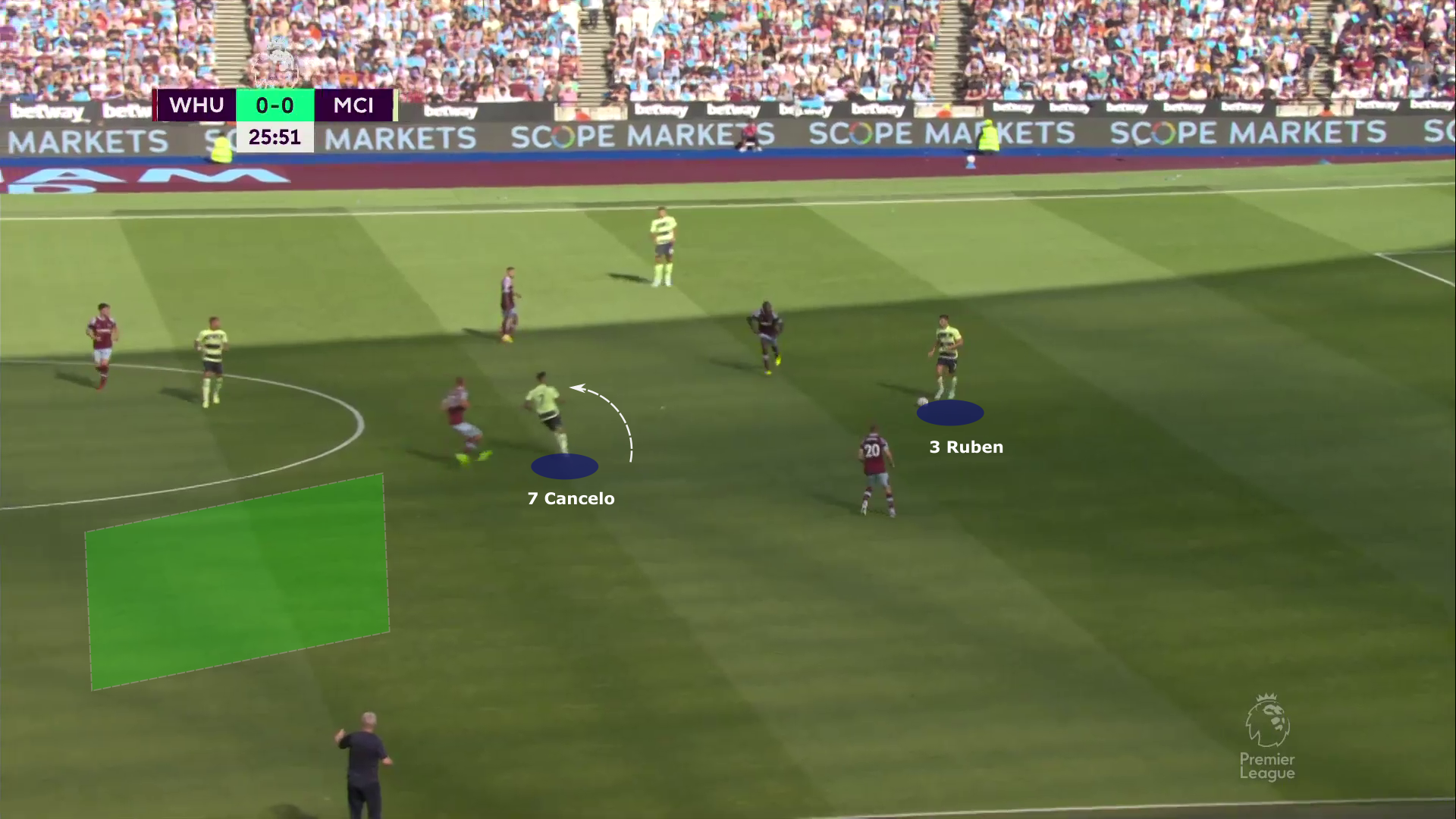 The Gündoğan-Cancelo combination is on show once more as the midfielder drops into the vacated space and meets the ball from Dias. 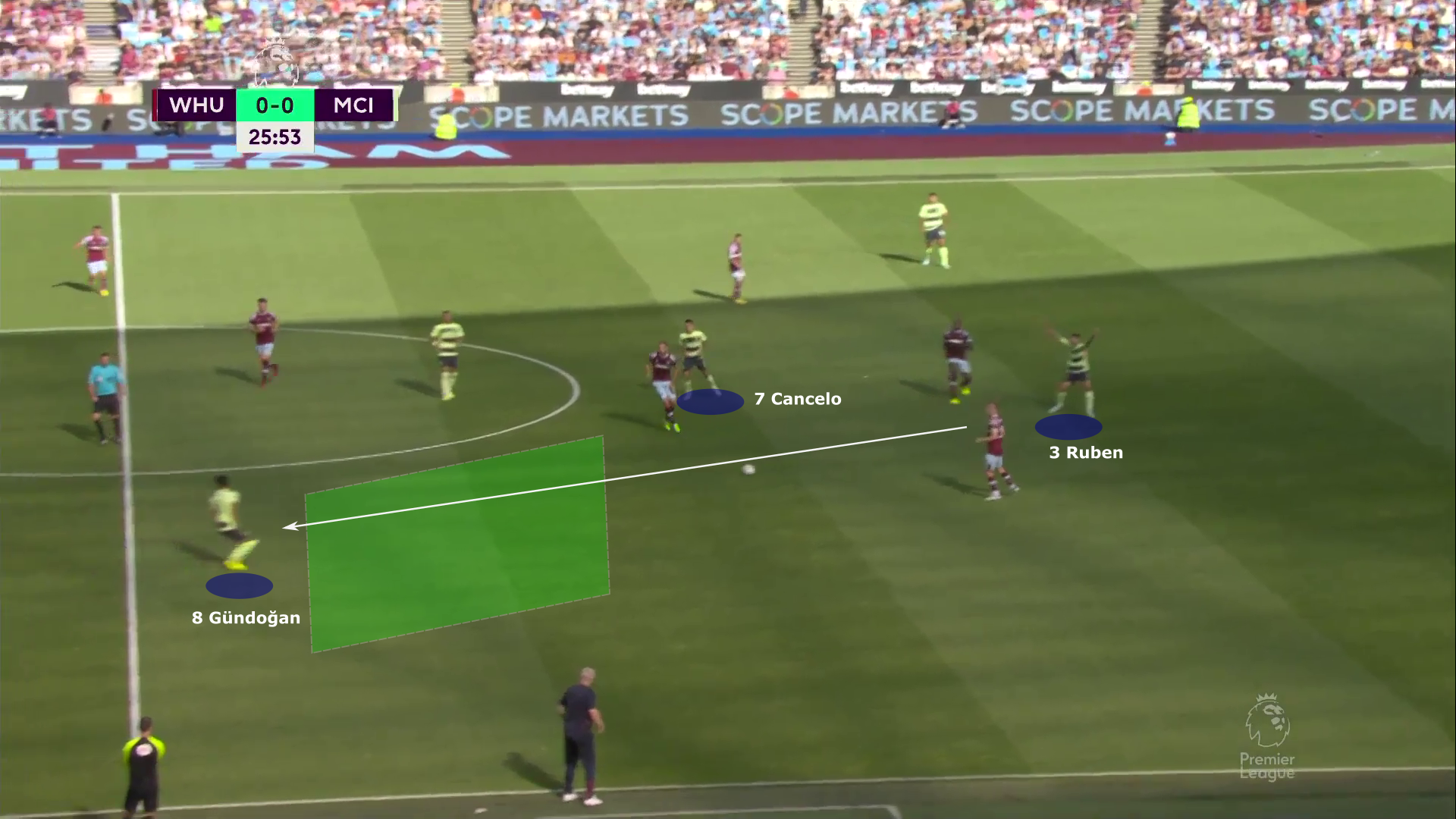 The synchronization between the movement and the passing was spot on from the City players.

Once more space started to open up, the midfielders and full-backs began interchanging, making it difficult for West Ham to keep up. Cancelo and Walker would push up while Gündoğan and De Bruyne dropped deeper very fluidly.

City’s passing patterns tend to suffocate opponents and put them in a static mental state. The defenders spend most of the time chasing the ball and the game starts to bypass them. Bowen thinks that he has Cancelo covered; the ball will probably go out to Grealish, but the Portuguese drifts away swiftly and Rodri quickly spots him. 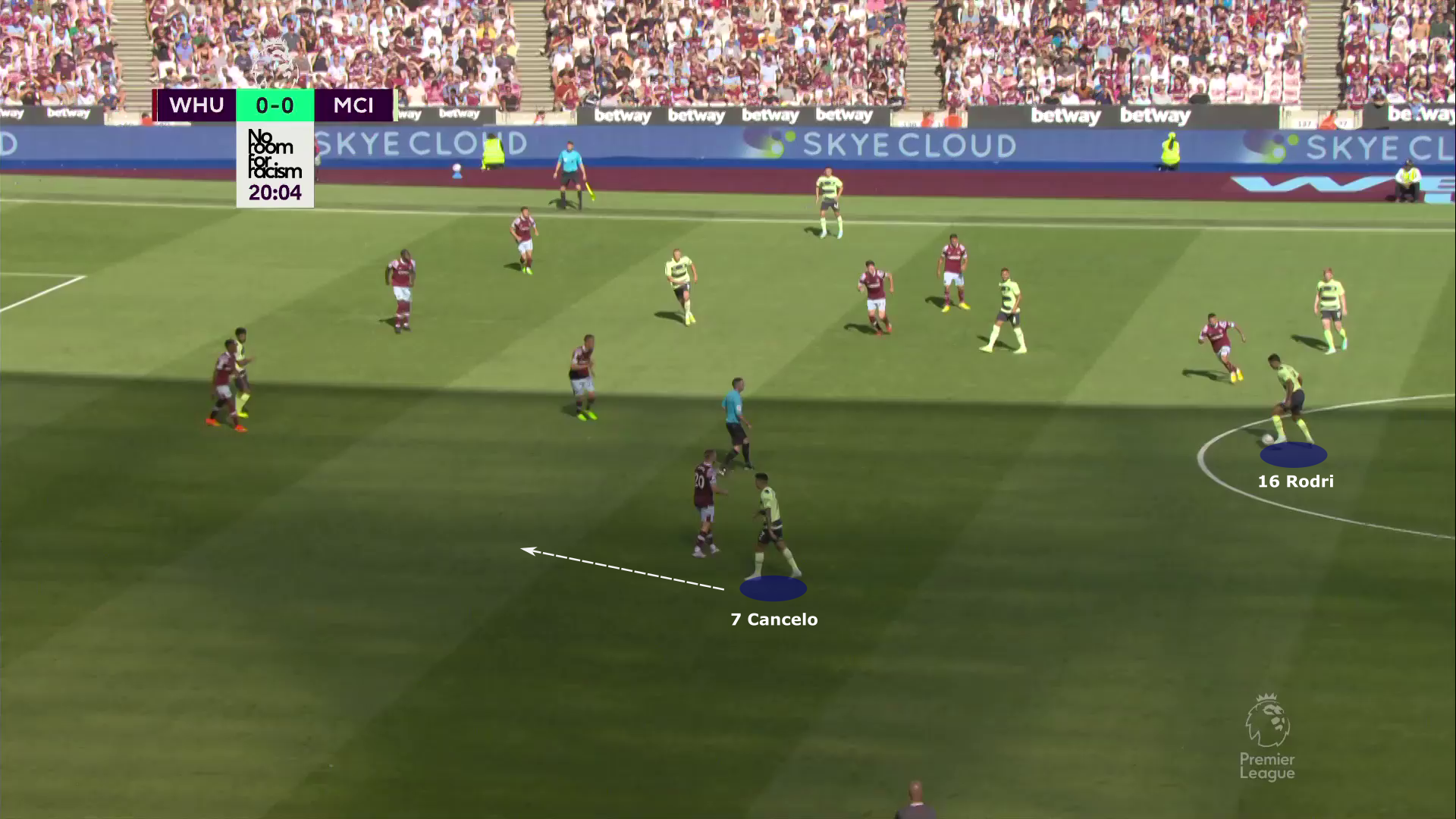 After receiving inside, City were constantly looking to switch to either Foden or Grealish to stretch the pitch and the West Ham defence. Cancelo’s technical ability in tight spaces allowed him to attract four defenders before switching the ball out to Foden on the right flank. He was always looking for the far side after collecting the ball in the centre. 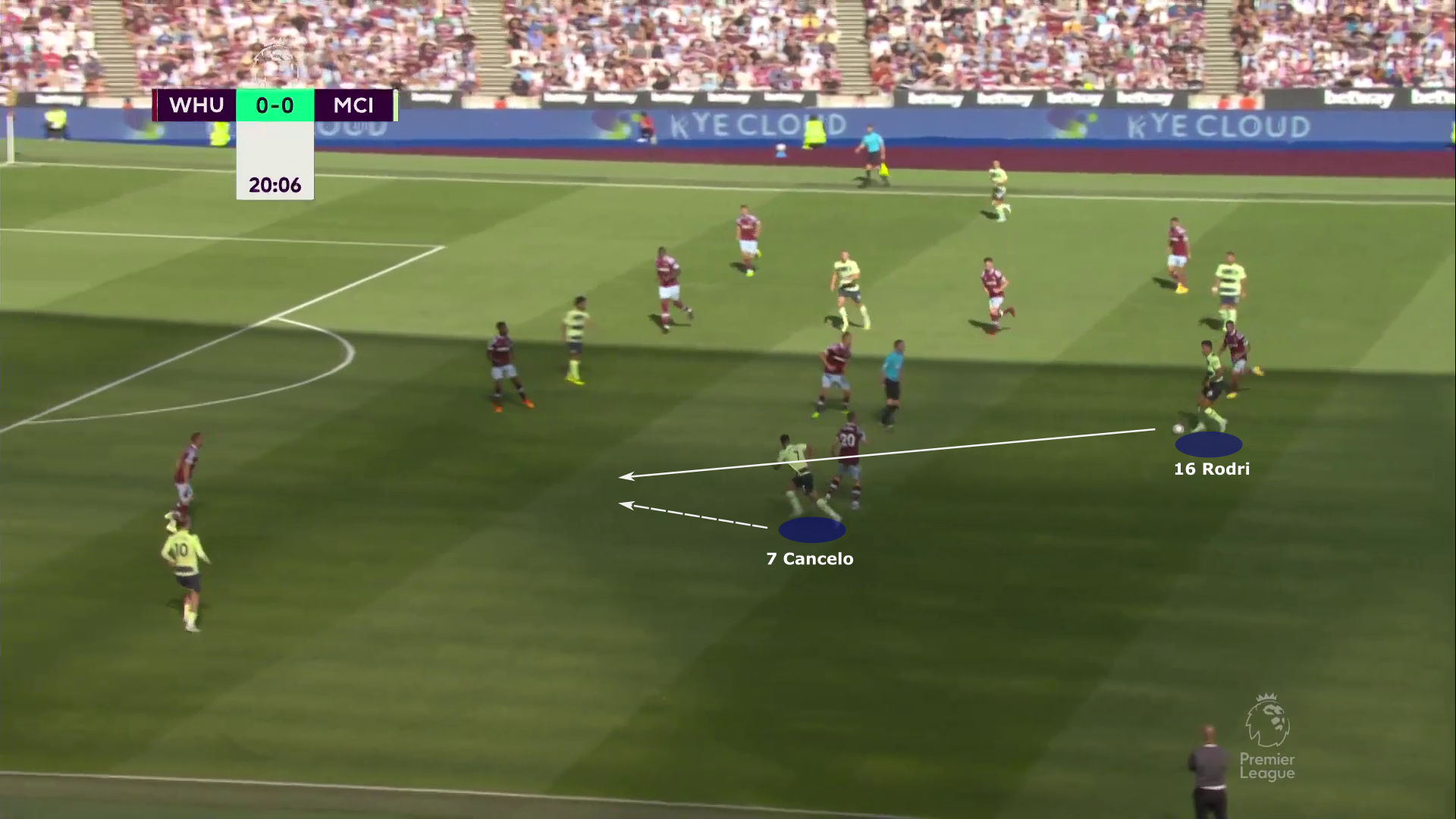 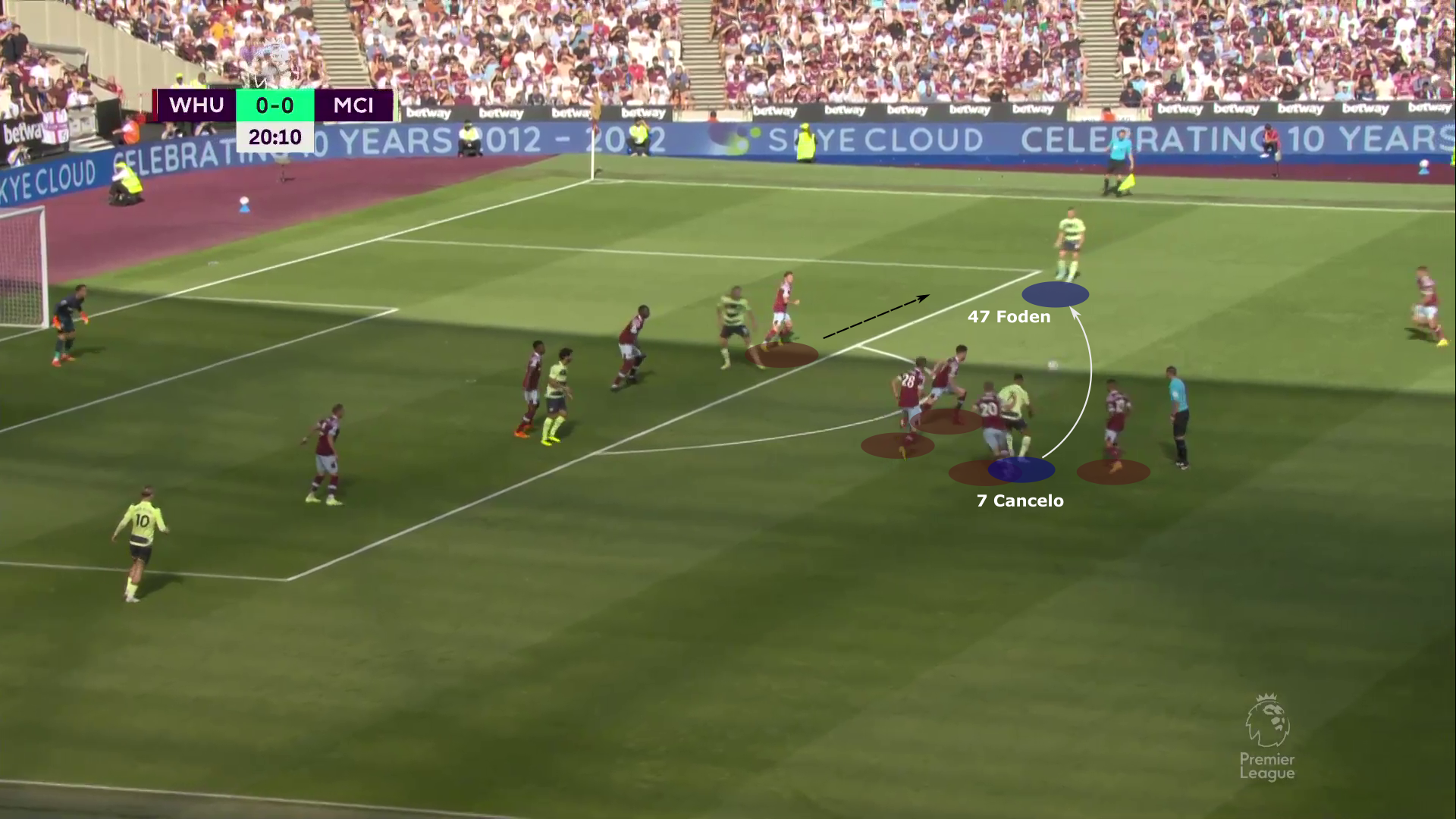 Similar patterns developed on the other side between Walker and De Bruyne. The England international was heavily involved in his side’s link-up play, something not usually common in Walker’s game.

Pep Guardiola post-match: “Today Kyle Walker was exceptional, maybe one of the best games he had since we were together. Because it’s not just defending, it’s playing.”

He had to get a mention, didn’t he? The end objective of everything analyzed above is of course to get Haaland a sight of goal. The striker’s runs in behind were scary at times. Even when he didn’t get the ball, he managed to create space for others. With City’s smart play in their build-up, it was only a matter of time until they found Haaland. By deploying the two 8’s so high, the centre-backs are put under immense decision-making pressure – check the receiver or stay with Haaland.

Walker, similar to Cancelo, advances with the ball and drags defenders towards him. Souček, who endured a torrid afternoon, is caught standing in no man’s land. De Bruyne is free to receive while Zouma is unsure whether to jump towards the Belgian wizard or stay with the Norwegian machine. 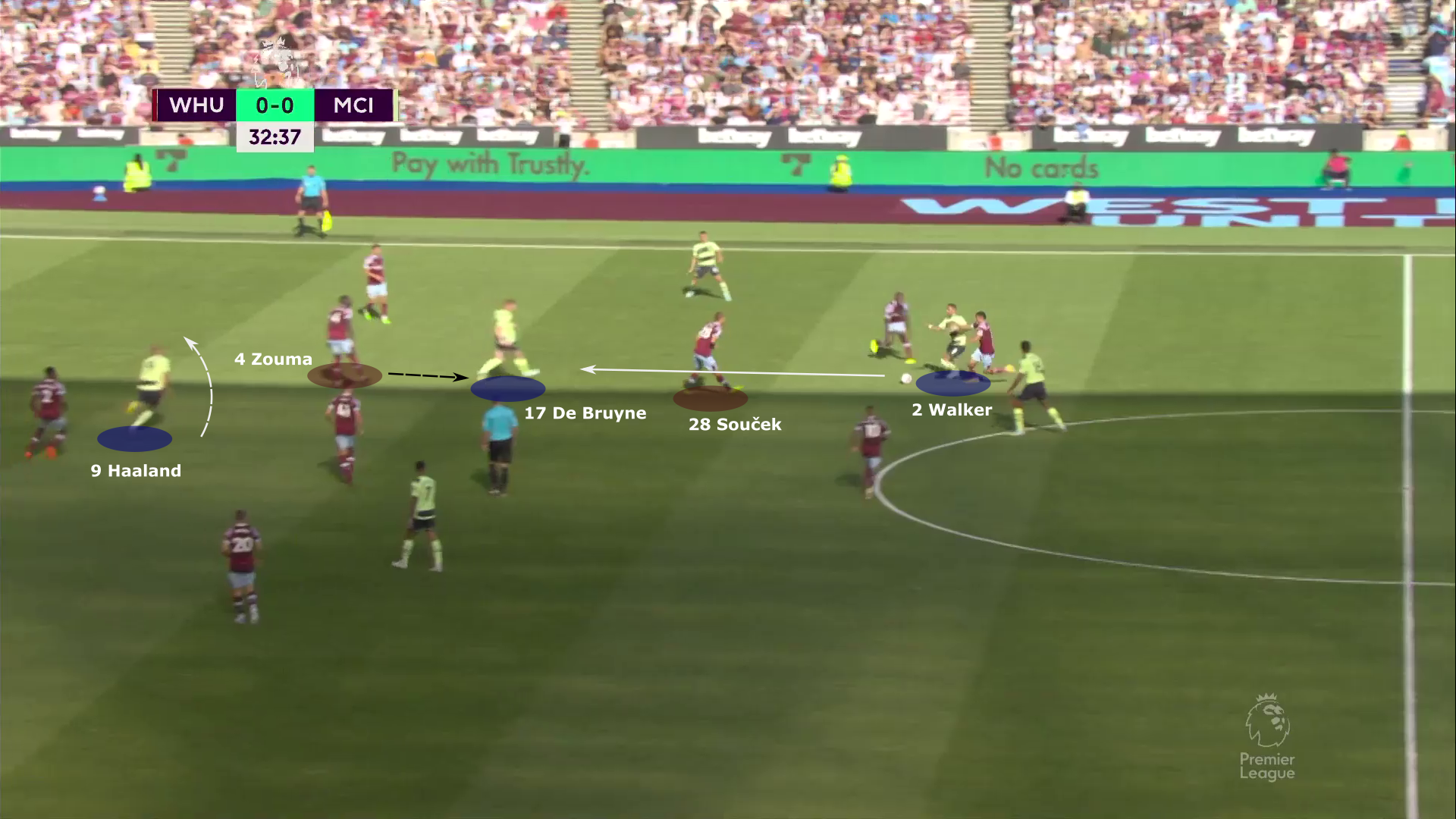 De Bruyne fizzes the through ball towards his striker but he puts too much on it and Areola is able to safely collect – but the danger signs were there. 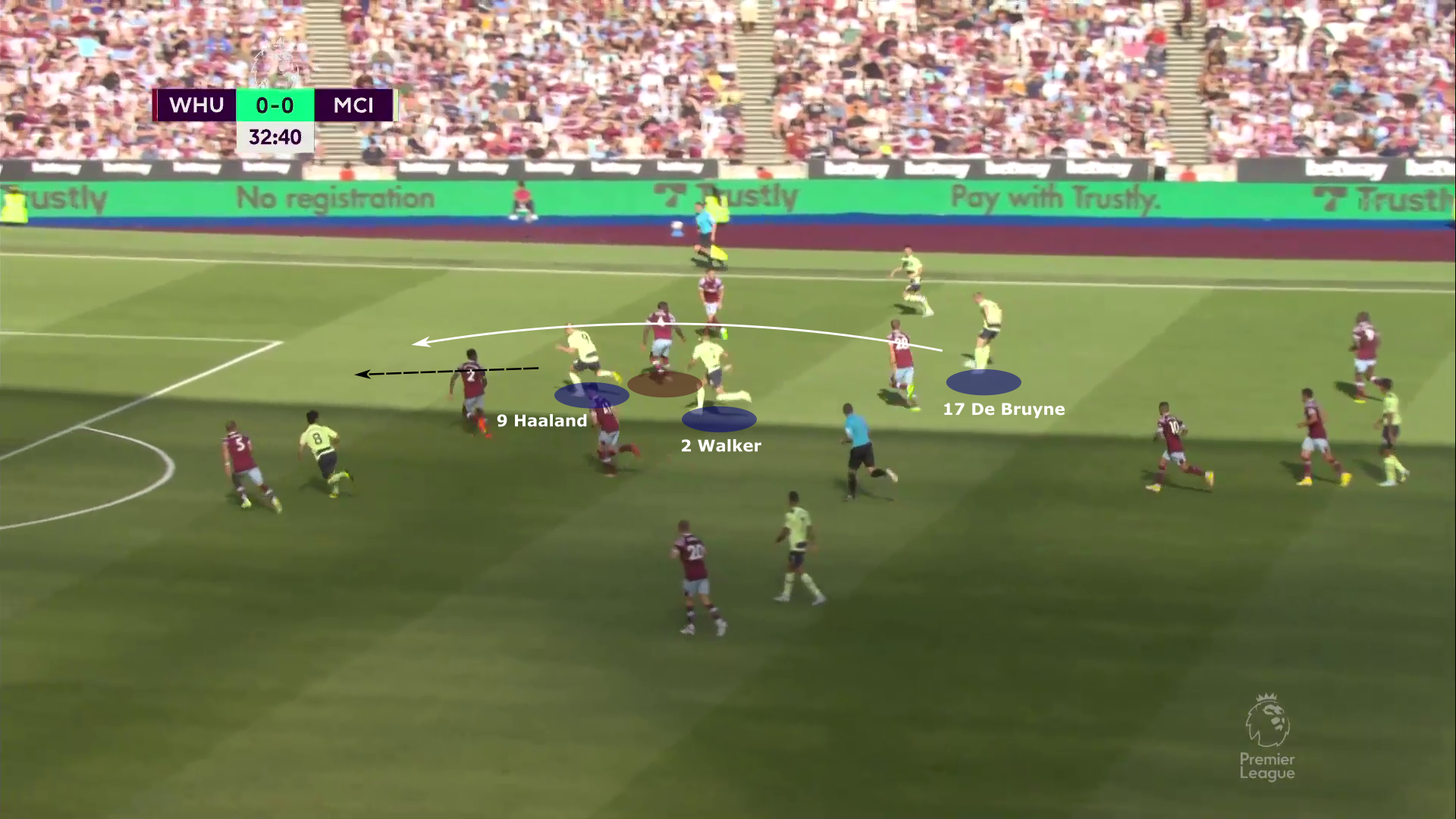 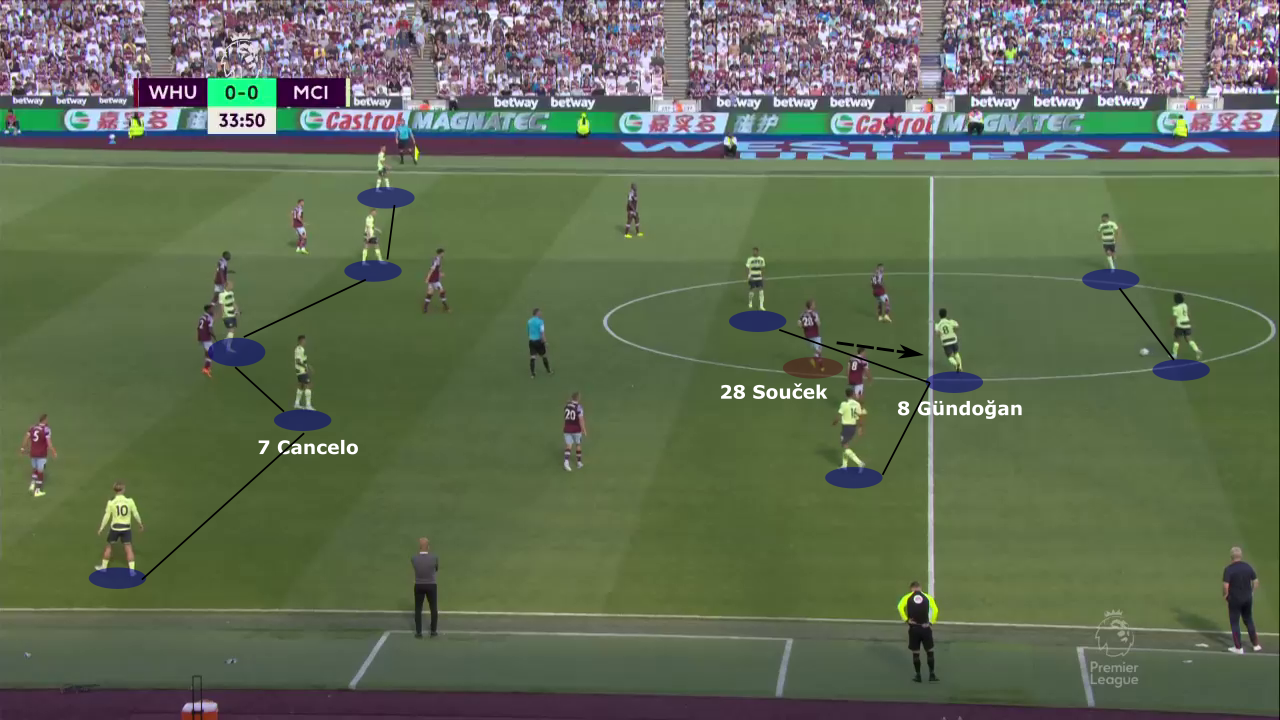 City are in their default shape in the build-up phase. Cancelo and Gündoğan have swapped positions. 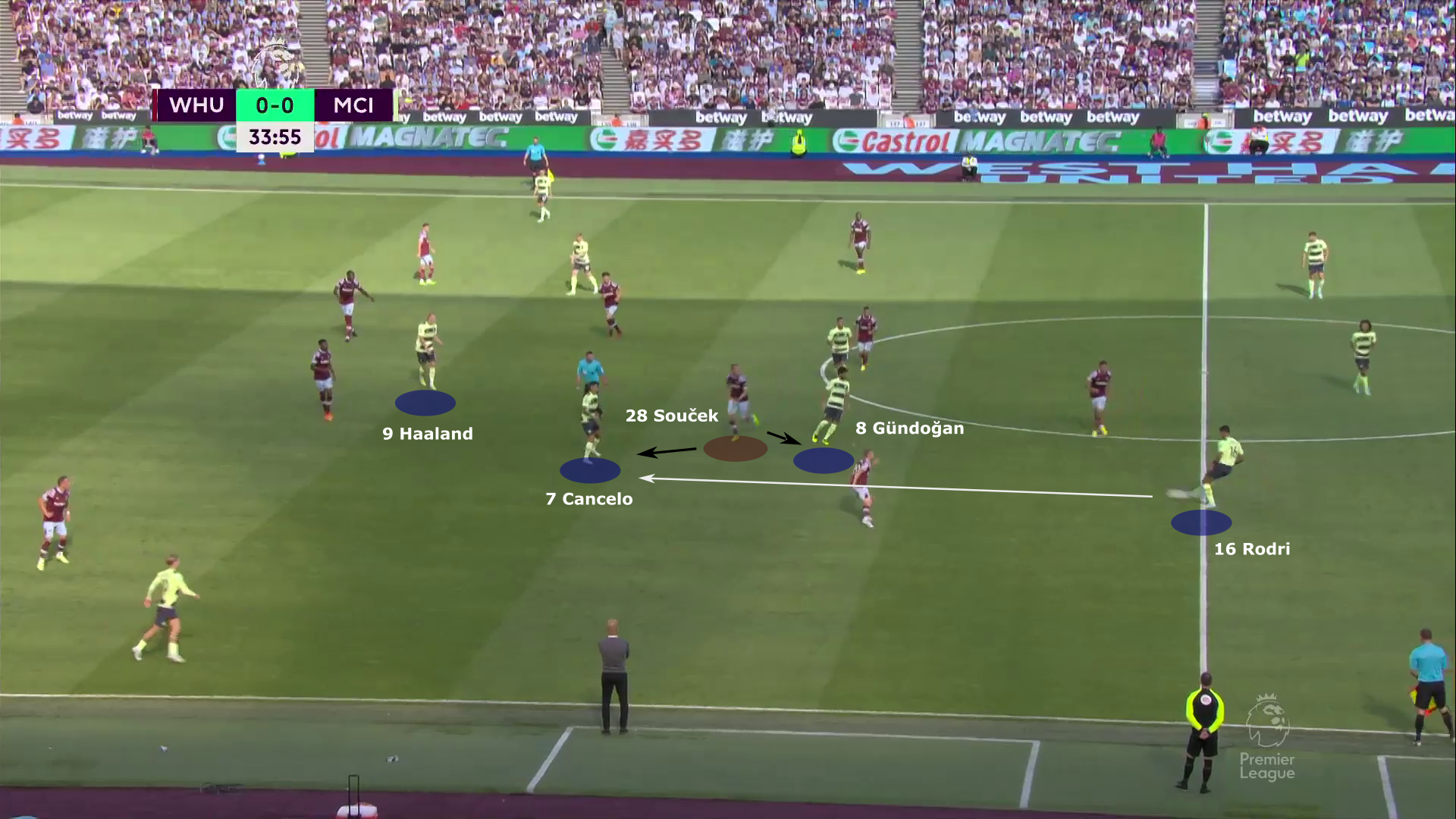 Souček is unable to adjust fast enough and the ball reaches Cancelo on the half turn. 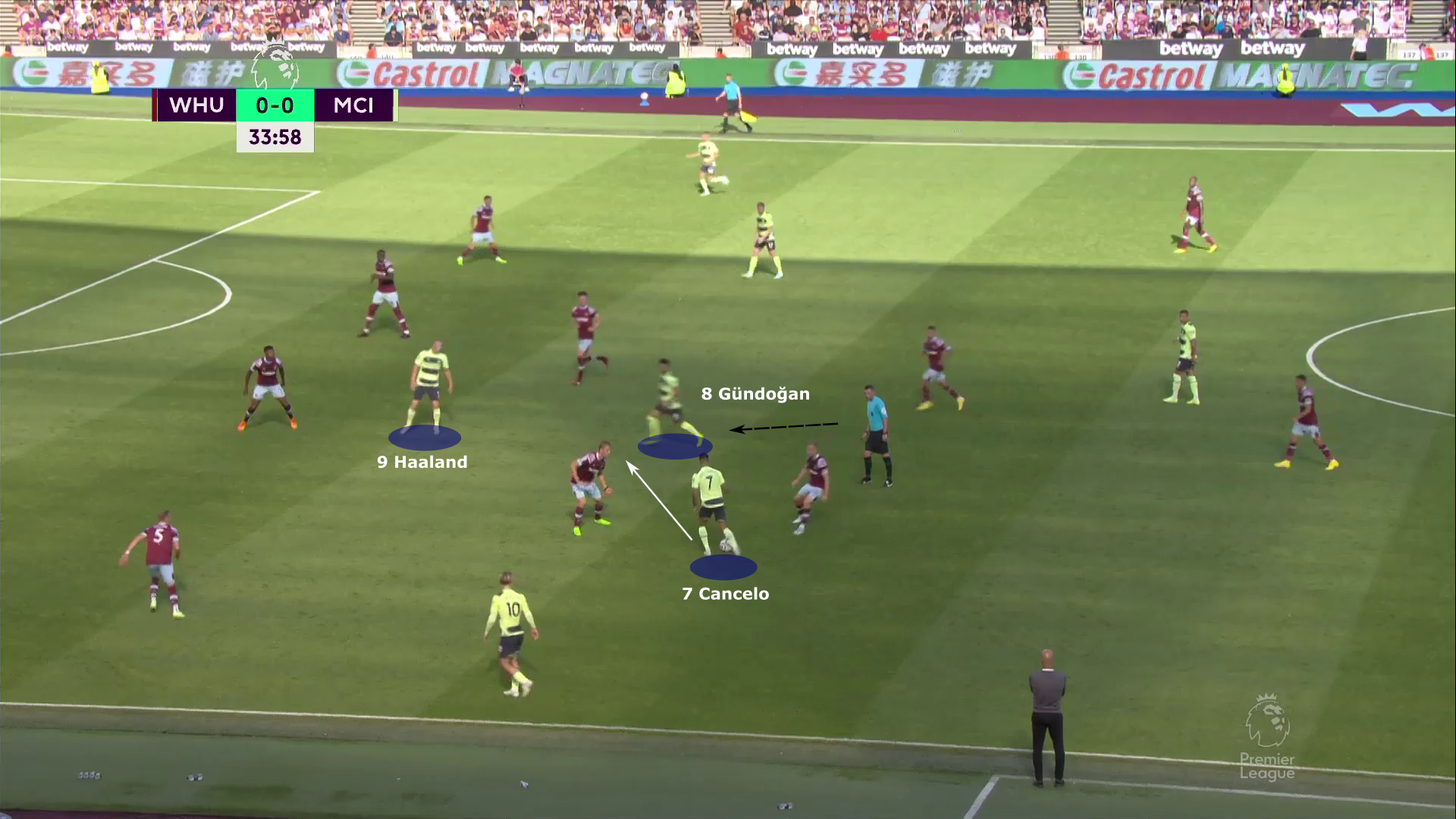 He holds up the ball as Gündoğan makes his way forward to get on the end of Cancelo’s pass. This is the cue for Haaland to make his stride forward. 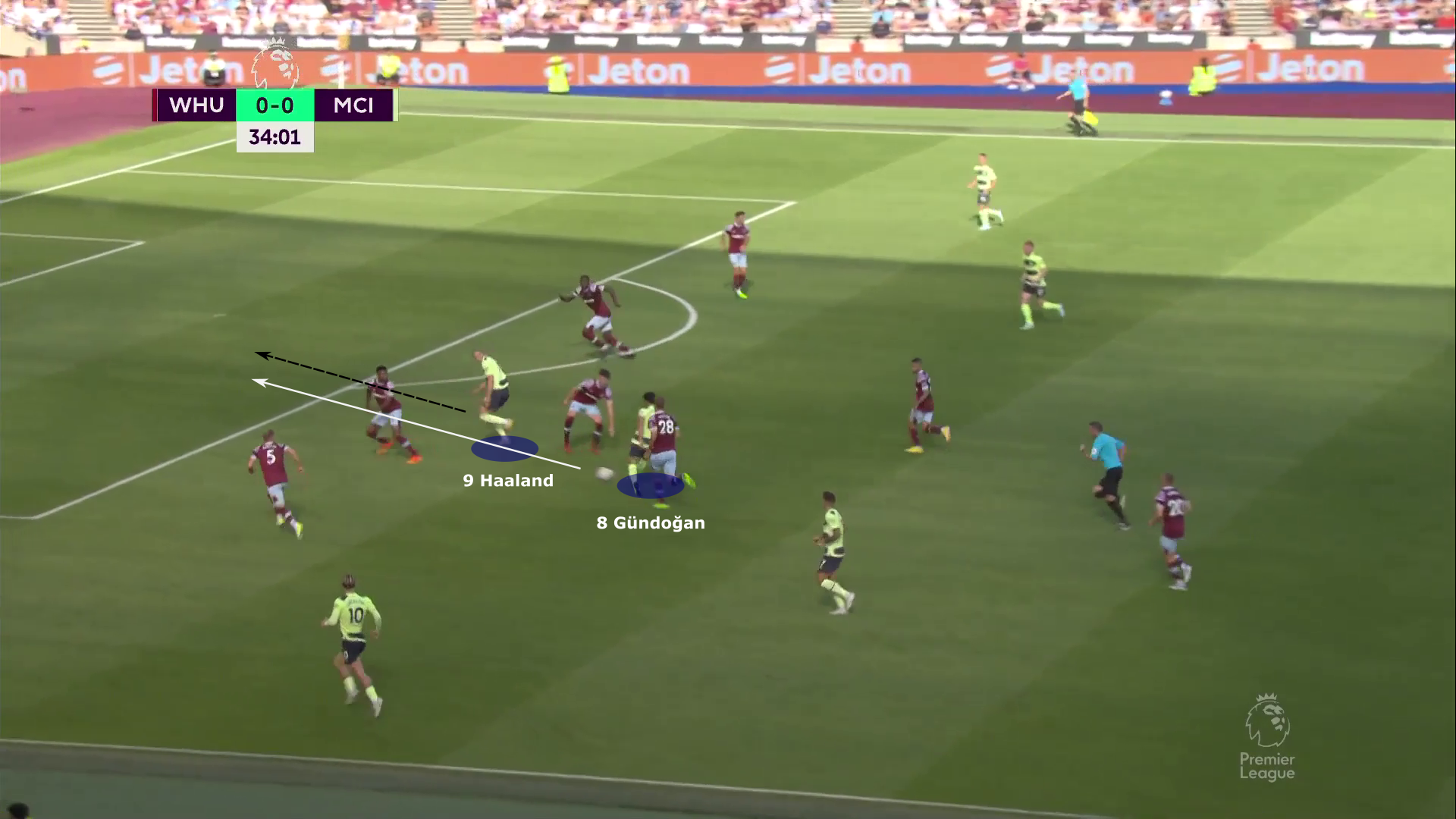 A slight myth regarding quick players is they are only effective against high lines. In reality, the best ones only need 5-10 yards of space to run into. Note how the centre-backs sink back to protect the channel in time. But Haaland’s pace and power are too hot to handle. He gallops into the area, beats Areola to the ball and gets fouled as a result. Dispatching his spot-kick without breaking a sweat was never in doubt.

“But the way he took the ball to take the penalty, I liked it. He’s direct and if someone is going to take his ball he will punch in the face of one of his mates. I’m pretty sure of that” – Guardiola said.

His second goal was a superbly structured counterattack. It showed how quickly City can strike now with Haaland at the top, it gives their game another dimension. Haaland is deadly, powerful and lethal anywhere around the box.

Whenever one of the 8’s received the ball in the half-spaces, Haaland was on his bike. With the wingers wide, putting Gündoğan in that half-space keeps the near centre-back on his toes while Coufal is pinned to Grealish. This leaves Haaland in a foot race with Zouma. 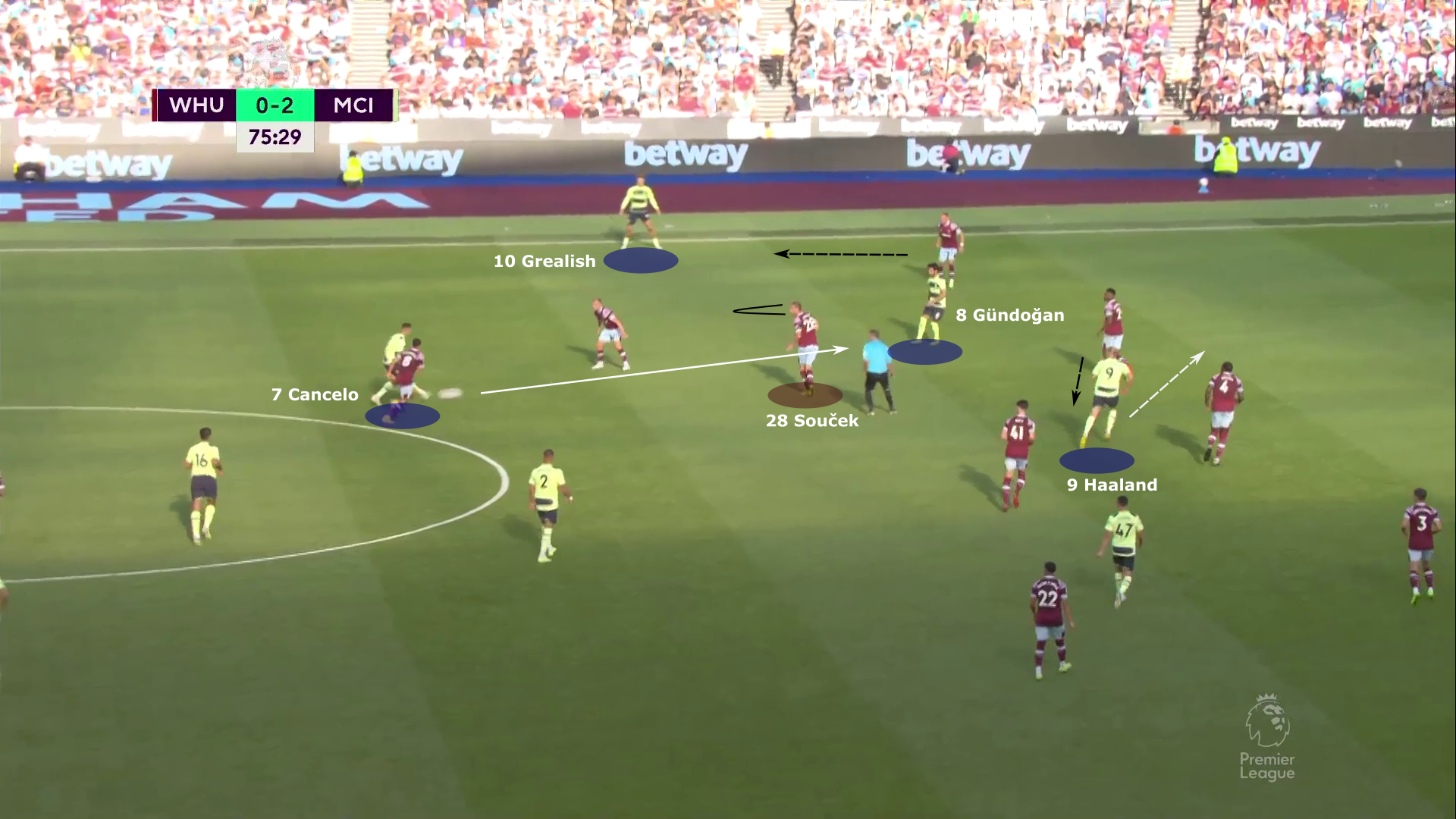 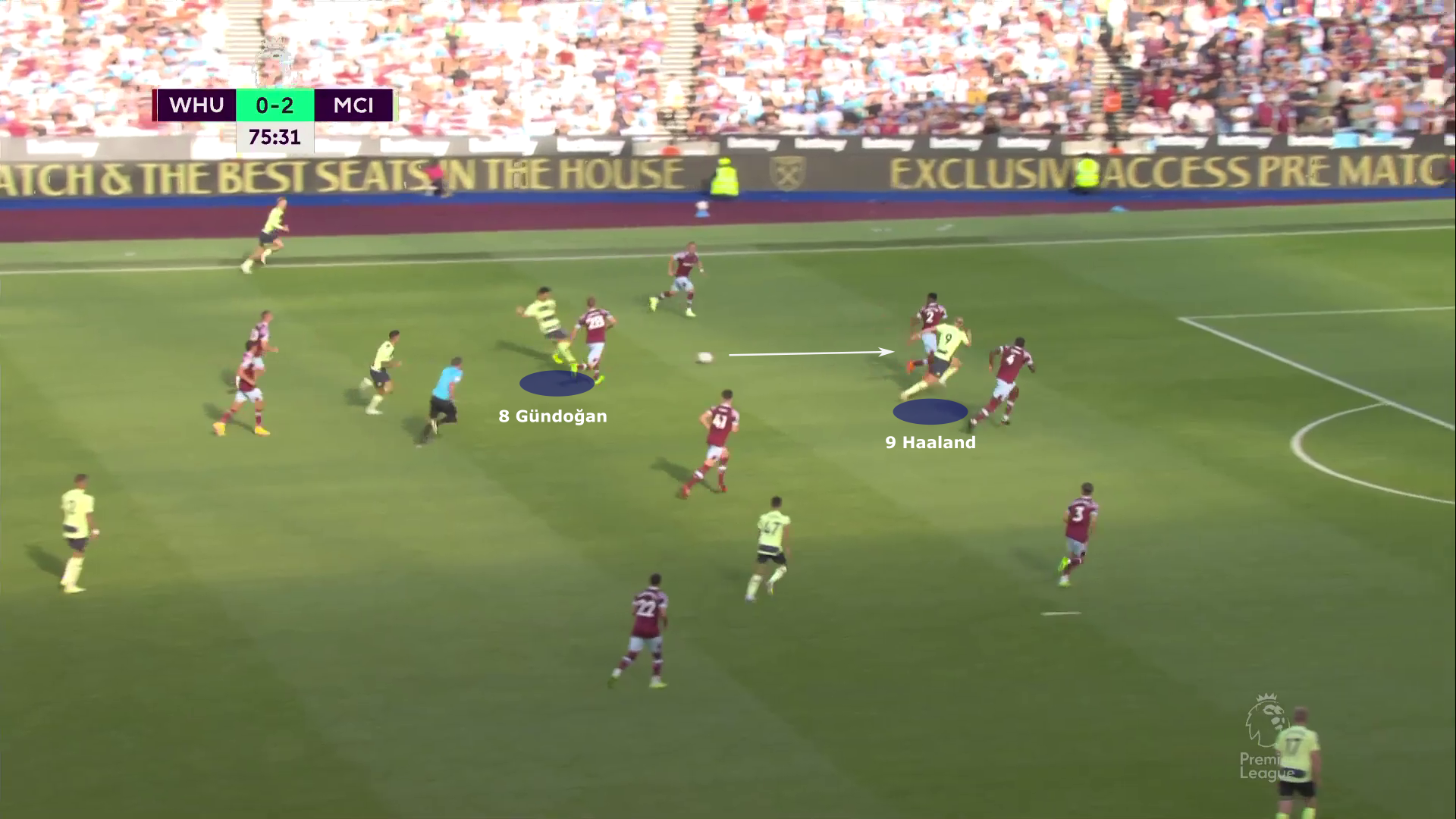 It can be argued that the centre-backs have done well here, sticking tight to Haaland. His acceleration and pace, however, enabled him to overtake the defenders and get on the end of the through pass.

In the end, City ran out as comfortable winners. Despite all the dominance though, they only managed two shots on target – a slight worry for Guardiola going forward. Most teams will sit deep when they face the Citizens, a challenge which the Spanish manager will need to try and overcome week in and week out.

On this occasion, we saw the switch of systems and unique tactics. This will be altered from game to game, depending on the opponent’s defensive set-up.

As for West Ham, this is only the first game of the season and is a minor setback. Next up, the Hammers travel to newly-promoted Nottingham Forest where they will be expected to come back with all three points.

Haaland enjoyed a memorable debut, he would have liked to get his hat-trick but was taken off in the 78th minute for new-boy Julián Álvarez.
City’s number 9 will certainly be keen on that golden boot come the end of the season.