With 150 million pounds spent and new additions within the squad with the likes of Martin Ødegaard from Real Madrid, Belgium U21 international Sambi Lokonga and Brighton’s Ben white, high expectations were placed upon Arsenal to showcase the progression within the football club. Arsenal were not the only heavy spenders coming into the brand new season as Aston Villa spent wisely on new acquisitions with the departure of Jack Grealish to Manchester City.

In the Midlands, the excitement begins to brew with Emiliano Buendía, Bundesliga star Leon Bailey and Danny Ings, a proven striker in the Premier League. Leading into this game, both teams have had rocky roads this season with Aston Villa getting good results against teams such as Manchester Utd and Wolves while Arsenal walked away victorious in the latest North London derby against Tottenham. On the other hand, Arsenal suffered major blows during the first 3 games of the season. This sentiment can be shared as Aston Villa lost their opening day fixture vs newly promoted Watford. Nevertheless, both teams are newly improved and look to gain momentum as the Christmas period gets closer.

This tactical analysis will showcase Arsenal’s lighting start which contributed to their early goals while also dissecting Aston Villa’s in-possession scheme and half-time tweaks regarding tactics. Lastly, I will be delving into Alexandre Laccazette’s role regarding Arsenal’s press and creating space for teammates.

Aaron Ramsdale started in goal with a back 4 of Takehiro Tomiyasu at right-back, Ben White and Gabriel at centre-back with Nuno Tavares at left-back. Thomas Partey and Albert Sambi Lokonga played as a midfield two with Bukayo Saka on the right and Emile Smith Rowe on the left. Alexandre Lacazette occupied the ten role with Pierre-Emerick Aubameyang as a single striker.

For Aston Villa, Emiliano Martínez started in goal with Axel Tuanzebe, Ezri Konsa and Tyrone Mings forming a back three. Matt Targett and Matty Cash are both positioned in wing-back roles, with a midfield 3 Emiliano Buendía, Douglas Luiz and John McGinn. Up-front was a striker partnership of Danny Ings and Ollie Watkins. 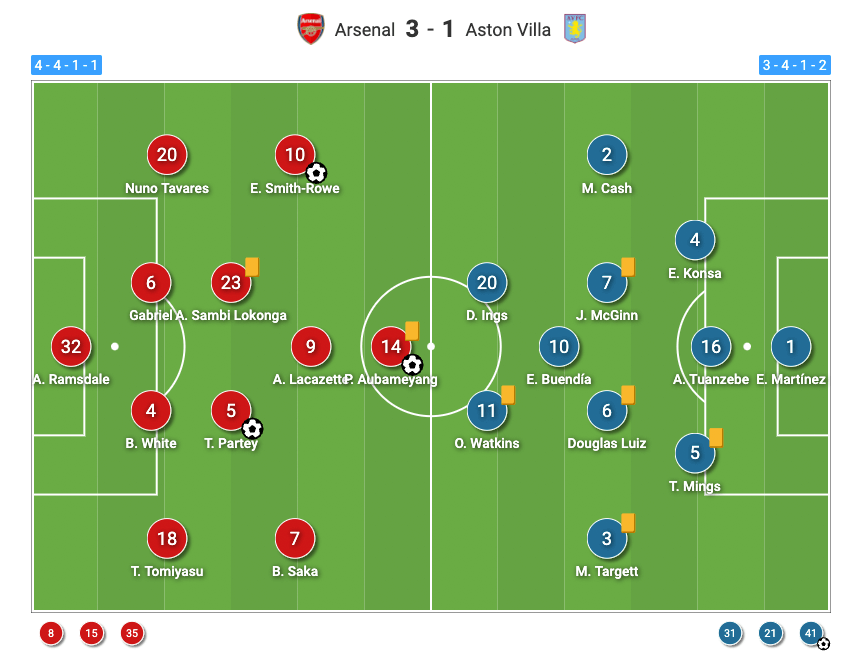 During the opening passages of play, Arsenal was most impressive when progressing through the thirds. When building from the back, Arsenal’s positional play was structured, at the same time it was meaningful and effective, two terms Mikel Arteta has been criticised for his team lacking this at times. Arsenal utilised multiple variations within their build-up. When looking to advance the ball vertically, a midfielder positioned within the final third, usually, Emile Smith-Rowe or Alexandre Lacazette would drop into the half-spaces and create overloads against Aston Villa’s pressing front four. An alternative strategy that was employed was the use of pinning and occupying opposition players to grant space for potential ball carriers.

A prime example of this tactic is when Ben White has the ball. Aston Villa’s front four is engaged with Arsenal’s centre-backs and double-pivot, which allows Takehiro Tomiyasu to receive under no pressure. What allows Takehiro Tomiyasu to progress forward without any issue from the opposition was due to the positioning of Bukayo Saka and Alexandre Lacazette who are both using their gravity to keep both Tyronne Mings and Matt Target away from Tomiyasu. 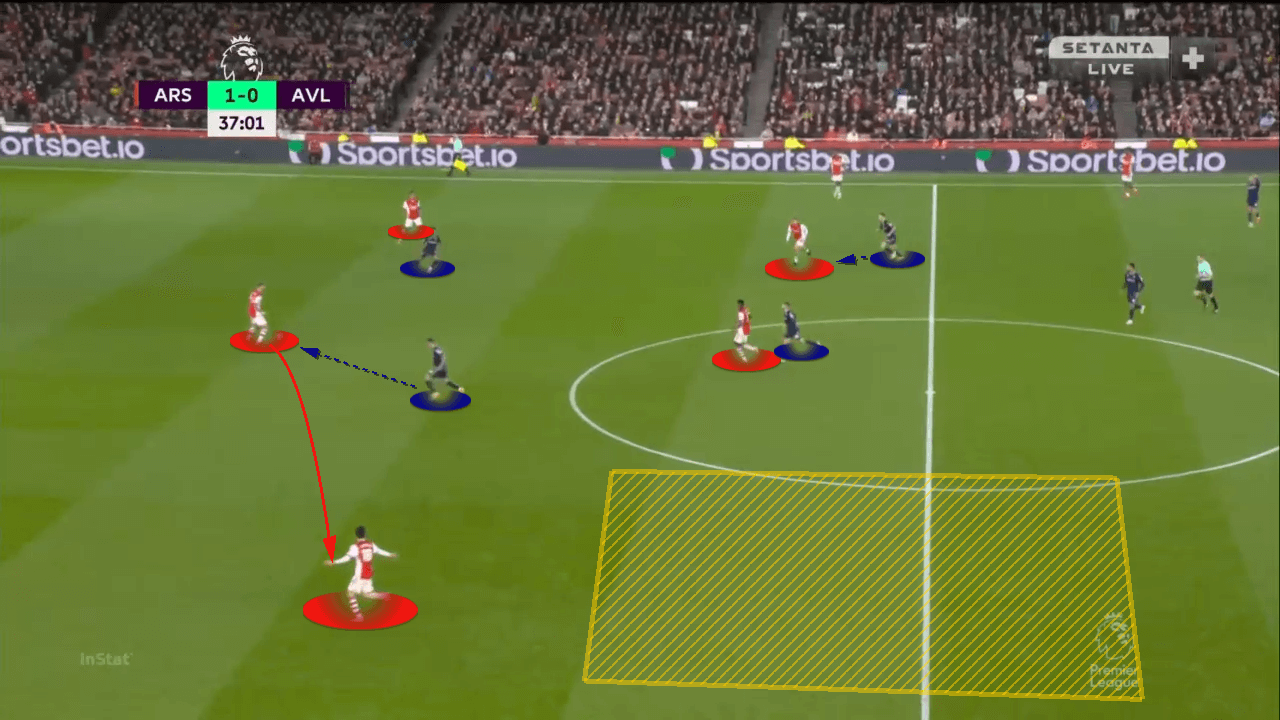 Here, we can see the positioning of Bukayo Saka and Alexandre Lacazette, both perfectly placed to keep the opposition defenders away from the ball carrier and granting him space to receive, turn and push forward. 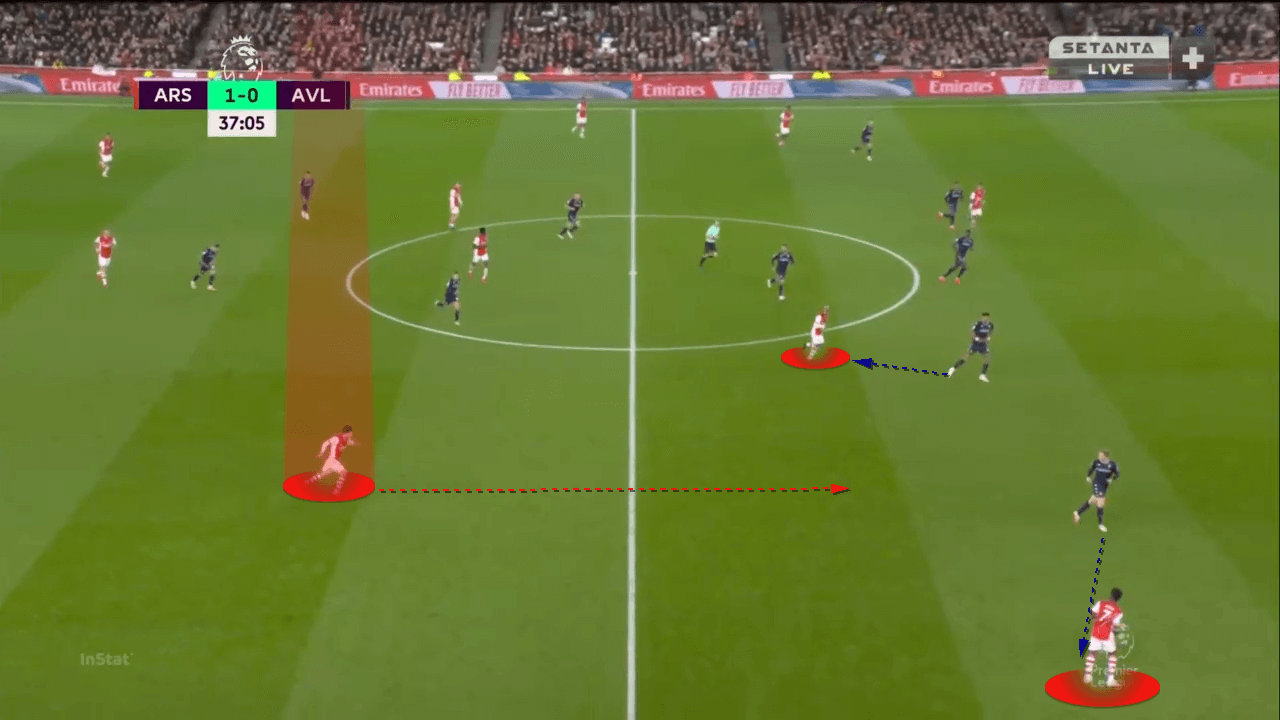 As mentioned prior, at times, Emile Smith-Rowe was afforded time and space within the left half-space due to Nuno Tavares creating width down the left flank. While Smith-Rowe operated within this space, he was able to differentiate centrally and create passing connections to move the ball forward while being a passing target himself. Also within these wide areas, Arsenal did well to manipulate space with their counter-movements and triangular rotations with Sambi Lokonga and Thomas Partey pulling into wider positions to beat Aston Villa’s press. 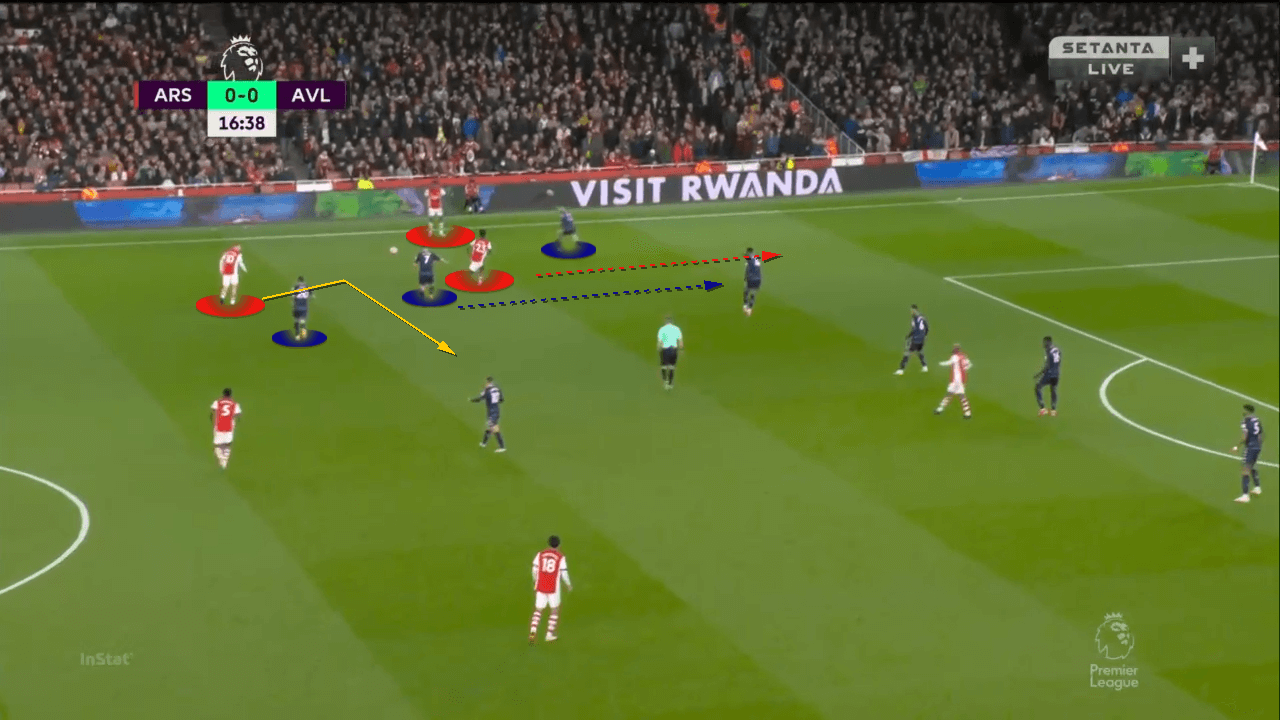 It was safe to say, Arsenal and Aston Villa were opposites during the first half for a multitude of reasons. Arsenal was fluid yet organised, Aston villa was not. Going into the half, Aston Villa accumulated 0 shots on goal, 0 chances created and 48% possession. Villa began with Emiliano Buendía as a ten, with a John McGinn and Douglas Luiz just behind but that this system changed at times with Douglas Luiz playing as a single pivot and Buendia and McGinn just in front. That being said, Villa attempted to build up using a 3 + 1 structure. The reason why Aston Villa’s scheme was ineffective was due to how Arsenal set up their man-to-man marking. 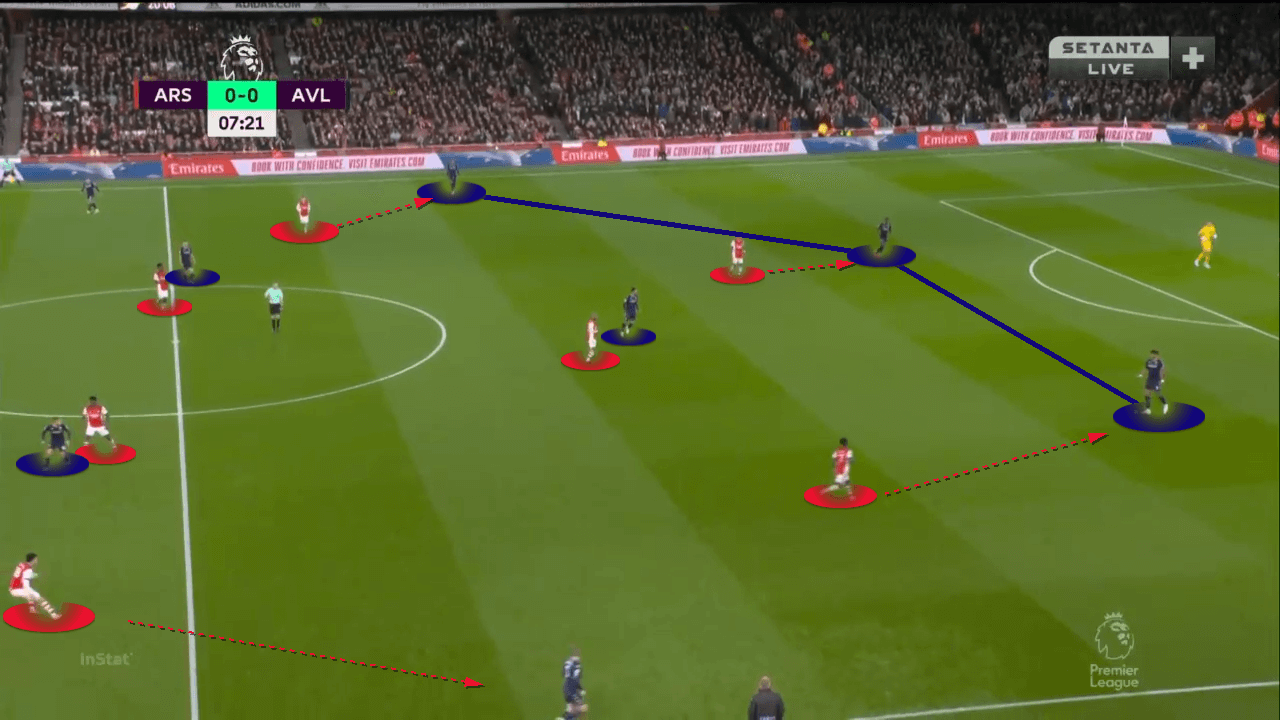 Villa manager Dean Smith decided to make some tactical alterations for the beginning of the second half, the first being to ditch the 3-1-4-2 and revert to a 4-2-3-1 by taking of Axel Tuanzebe for Leon Bailey; also, Ollie Watkins now playing as a left-winger and Danny Ings as a lone striker. This change did good for Aston Villa as they were able to progress the ball forward, creating passing networks and finding free men who can receive in space. In the first half, Arsenal matched villa man-for-man but what Villa’s new 4-2-3-1 creates is numerical superiority within the first phase for Aston Villa.

With the addition of wingers for Villa, both Arsenal full-backs cannot press either Matt Targett or Matty Cash as they have to focus on Leon Bailey and Ollie Watkins and with both Alexandre Lacazette and Sambi Lokonga were man-marking Villa’s new midfield pair and Arsenal’s wingers pressing Villa’s centre-backs, Matt Targett and Matty Cash were both left in space unmarked, which gave Aston villa a gateway to push forward. Additionally, Villa’s back two operated as a makeshift back three as Emiliano Martínez split both Tyronne Mings and Ezri Konsa. Overall, Aston Villa’s tactical switch created a 6v4 situation that saw a massive improvement, regardless of the scoreline at the end of the match. 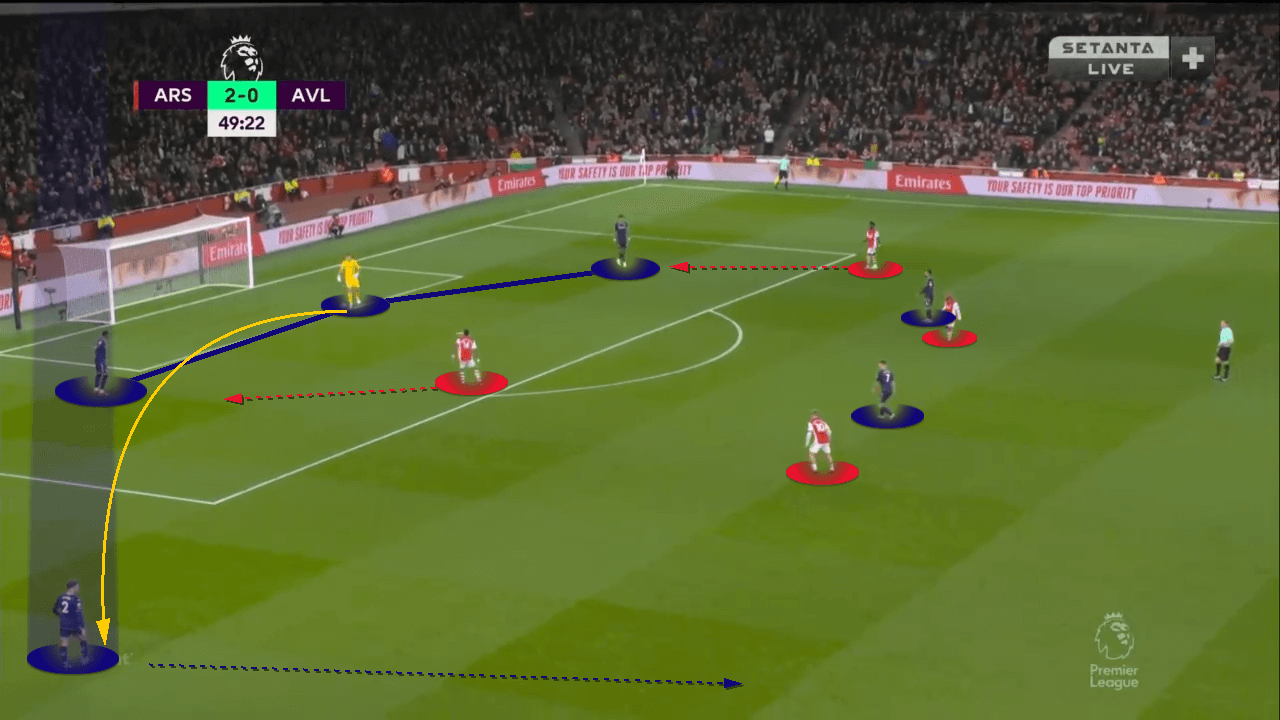 Alexandre Lacazette’s Role in and out of possession

Alexandre Lacazette played a key role within Arsenal’s overall structure with and without the ball. Regarding in possession, Lacazette demonstrated his fantastic link-play with teammates in and around him with his hold-up play. Lacazette’s ability to position himself to receive was also on full display and he was able to do so by moving laterally across the field and at times creating overloads in wide areas to facilitate play for the team. Out of possession, Lacazette was tasked to keep tabs on Douglas Luiz which he was most successful during the first half. Also during this game, Lacazette amassed 4 tackles while winning 4 loose ball duals.

This image is a perfect example of Alexandre Lacazette’s support play and assisting Takehiro Tomiyasu within the final third. Lacazette decides to drop deep to support play and while doing so, he has a marker tracking his run and applying pressure. 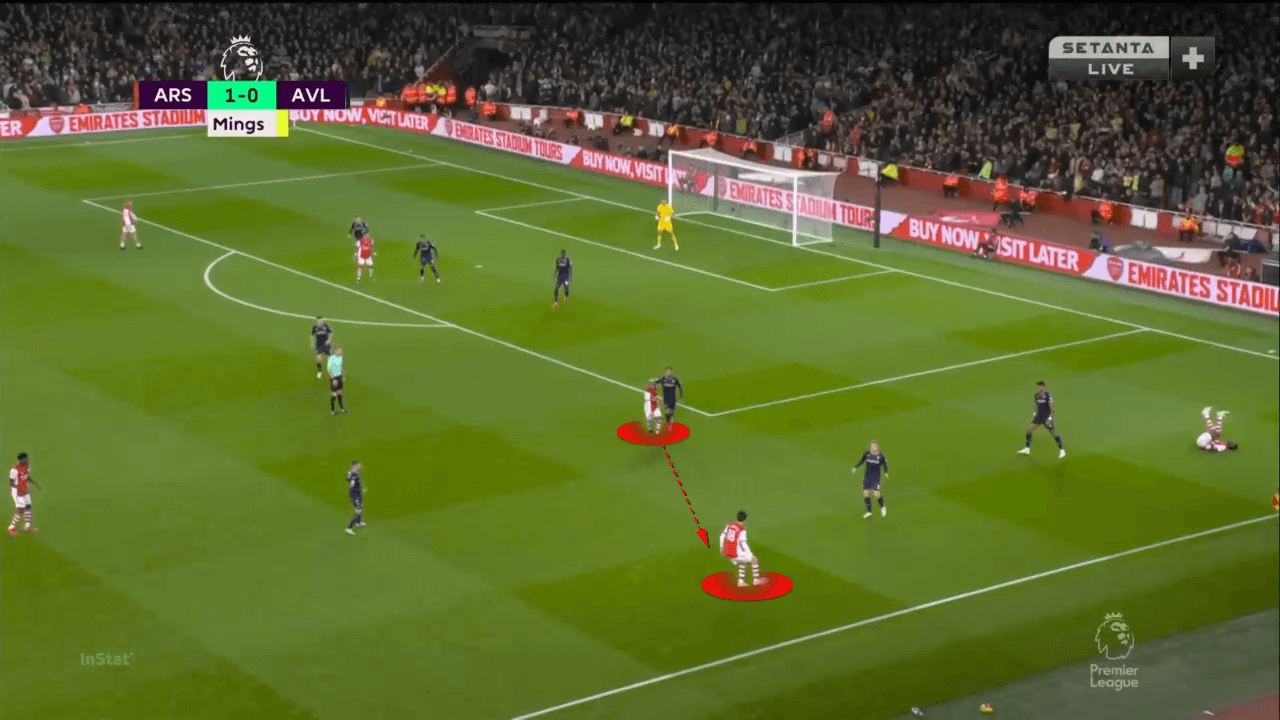 Under these circumstances, Lacazette is able to trap the ball, hold off his marker by using his strength and body effectively and in-result, roll the defender and manoeuvre into the space in-behind. 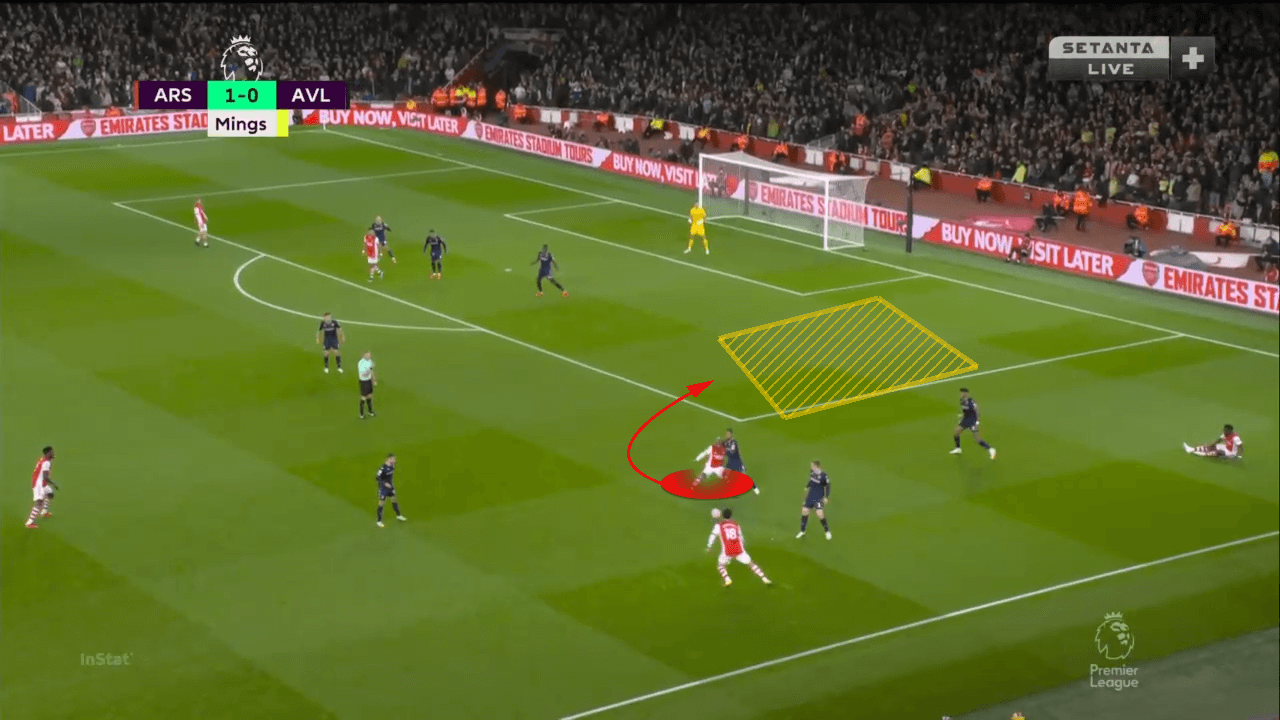 For all the criticism Mikel Arteta faced during the opening fixtures of the Premier League season, the Spanish coach has turned well to turn a group that lacked cohesion and rhythm into a team that looks capable of taking major steps in moving the club forward. This point of view can be echoed through their performance against Aston Villa as they went into this game with a clear plan of action. By contrast, in the opening exchanges, Aston Villa was not tactically prepared as they struggled against Arsenal’s high press. Regardless of the first half, Dean Smith and his men were quite successful with their changes, which did not make a change to the overall result but the improvement was visible. Needless to say, the young band of academy graduates and summer signings proves they can work together.