Watford’s start to this new Premier League season had not been easy. After gaining only one point, an away draw against Newcastle, in the first four games, and being at the bottom of the Premier League, the board of Watford fired Javi Gracia and his staff after more than a year and a half in charge.

As his replacement, they brought another Spaniard, Quique Sanchez Flores, who had a decent 2015-2016 season in charge of the Hornets. Not an easy start for Sanchez, in that in his first game he had to face Unai Emery’s Arsenal followed by a visit to current title holders Manchester City.

Meanwhile, Arsenal had a good comeback in their last game, claiming a 2-2 draw against London rivals Tottenham, after being two goals down during the first half of the game. But they accumulated two winless games and needed points to stay close to the leaders.

In this tactical analysis, we will look into the most interesting tactical concepts that arose in a very attractive 2-2 draw between Watford and Arsenal. Although the visitors had a two-goal lead until the second half, Watford’s tactics were always stronger than Arsenal, and at the end, they managed to grab a point that gives them hope on the good quality of football they offered. 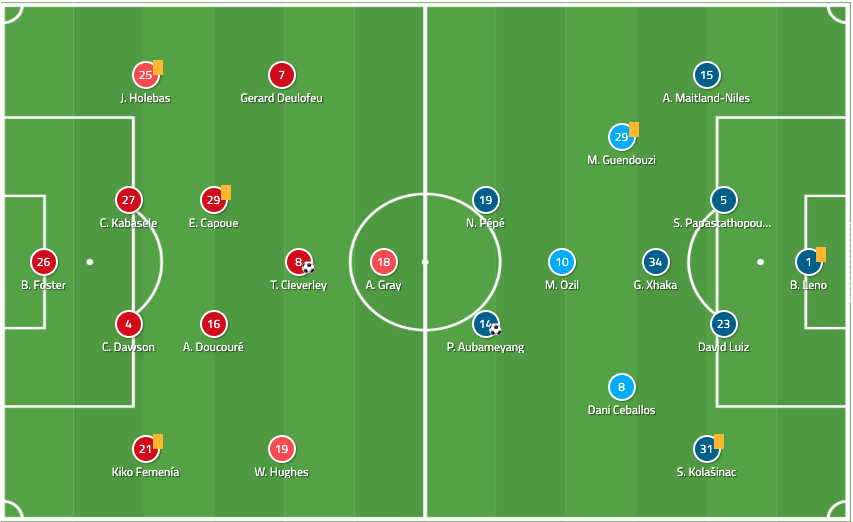 Watford started with a 4-2-3-1 having Gerard Deulofeu and Will Huges as wingers almost next to Andre Gray. With Abdoulaye Doucouré as a box-to-box midfielder and Tom Cleverley as support, the offensive strength of Watford was very damaging for Arsenal’s defence. This was shown in the 31 shots Watford had during the compared to 7 for Arsenal.

Arsenal used a 4-3-1-2 with Dani Ceballos, Granit Xhaka and Mattéo Guendouzi as defensive midfielders with the focus of controlling possession along with Mesut Özil. A plan that didn’t work out as expected leaving the top three players isolated from the rest of the team.

An important tactical virtue of any team is its ability to change. When things don’t develop as expected, teams and coaches need to have the capacity to detect that and offer alternatives to change the course of the game.

Watford proposed during the game, and especially for Arsenal’s goal kicks, a very high pressure. Under the new goalkick rules, Arsenal placed both central defenders, David Luiz and Sokratis Papastathopoulos, inside their goal area, starting the build-up from them.

Watford had at least four players close to Arsenal’s goal area, and as soon as they played the ball the pressure they tried was very intense. Depending on the side Arsenal used for the build-up, Watford players moved to exercise this pressure into all the defenders and midfielders of Arsenal that were close to the goal area, trying to force them to use long balls.

It is interesting to see how these movements were prepared with detail by Watford, where each player knew exactly how to move depending on the side where Arsenal chose the build-up, as the sequence below shows. 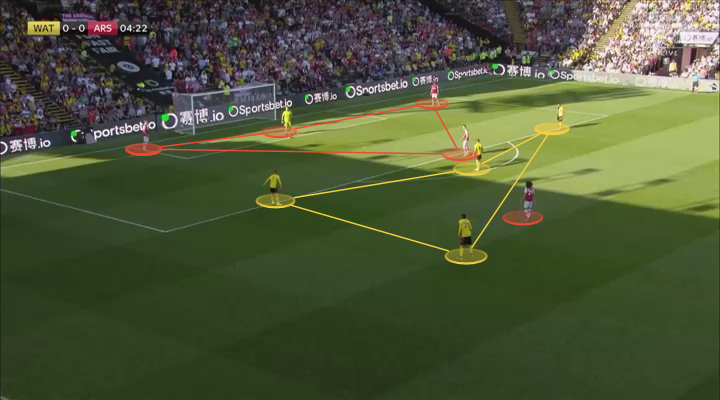 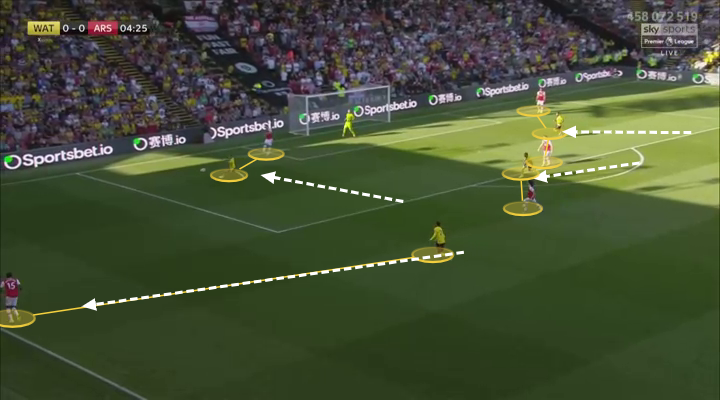 This resulted in several mistakes and dangerously lost balls by Arsenal close or even inside their goal area. David Luiz, Sokratis and Guendouzi were the most affected players. A quick analysis showed that Arsenal looked very complicated by this pressure but they didn’t change their tactics. They kept trying this build-up from the back until Sokratis’ pass was intercepted by Deulofeu and Cleverley scored.

The image below shows exactly the moment they lost possession for the first goal, and how Watford players are positioned without Arsenal players close to them. This makes it very hard or even impossible to recover possession fast enough to avoid a shot by the rivals. 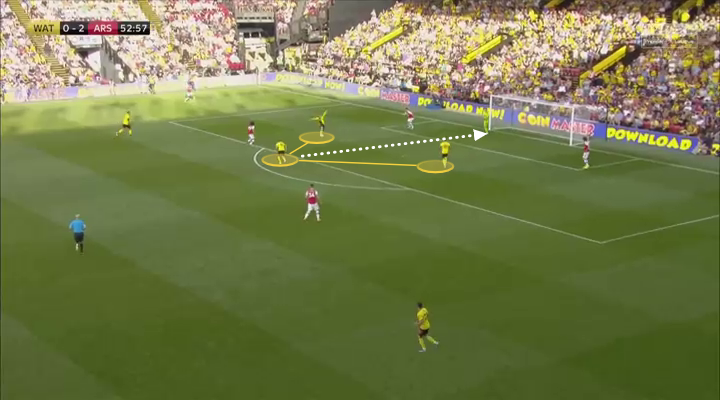 It was hard to believe that it took more than 50 minutes for Arsenal’s players and managerial staff to understand that their defence was struggling to avoid the pressure of Watford. They had to get a goal against and only after that, and several balls lost before, avoided the tight build-up from the back.

It is more unbelievable given the fact that they were two goals up, and there was no need to try this dangerous path of building-up, especially considering that Watford was placing several players very high, which meant that behind them were more spaces than normal.

A game with no midfield and a great midfielder

Watford and Arsenal offered a very attractive and high-paced game. The speed and verticality of both teams were impressive and it seemed that they were always at full-steam from one side to the other.

English football has been from its origins, a style of football where attacking and defending are the most common phases of the game, while the build-up has been less used, as Rinus Michels mentions in his well-known book “Teambuilding: the road to success”. The fast transitions in English football usually result in the ball staying for less time in the middle of the pitch and moving very fast from one goal area to the other.

During the first half, apart from the chances generated by their high pressure, Watford had very fast offensive transitions that often had them in 1v1 duels between their forwards and Arsenal’s defence. The visiting team had a hard team reading the attacking scheme of Watford, that even though had two very wide attacking players, their diagonal movements had them attacking through the wings and the middle.

Guendouzi and Xhaka were often pulled out of their position leaving more spaces in the middle that Watford took advantage of. And when they were caught mispositioned in the middle the home team used the wings to cause danger.

Below there are two different attacks, one through the middle and the other through the left-wing. In both cases, Xhaka was mispositioned leaving space in the middle and Guendouzi was not even close to him to provide cover. The spaces behind them were huge. 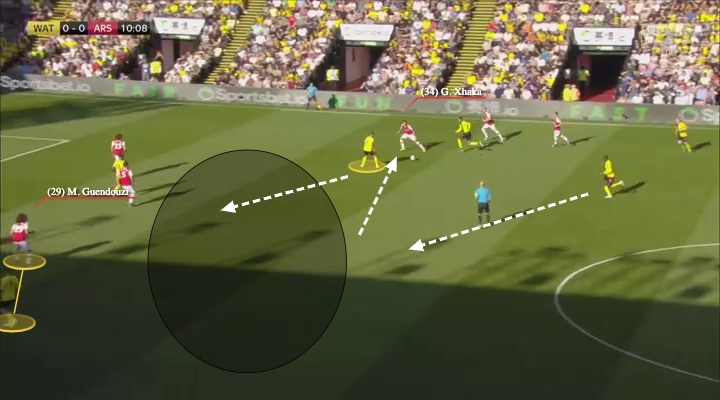 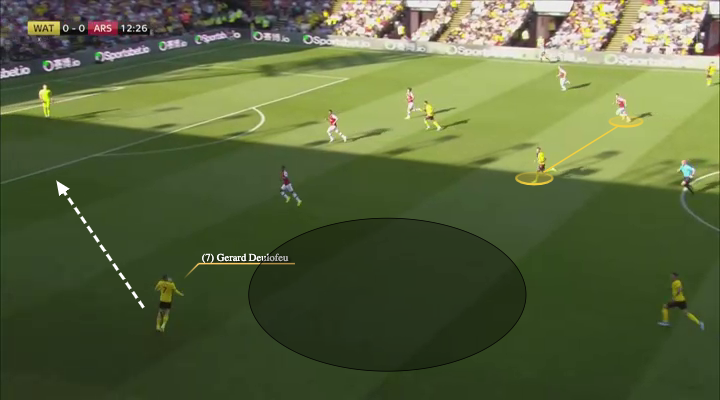 Arsenal, on the other hand, were dangerous as a counter-attacking team during the first half. Having a more defensive positioning under Watford pressure, they were very aggressive in the transition to their offensive phase, using the speed of Nicolas Pépé and Pierre-Emerick Aubameyang and Özil’s precise passing.

The image below shows a successful counter-attack by Arsenal, that when they were able to regain possession from Watford’s midfielders, they usually had numerical or positional superiority. 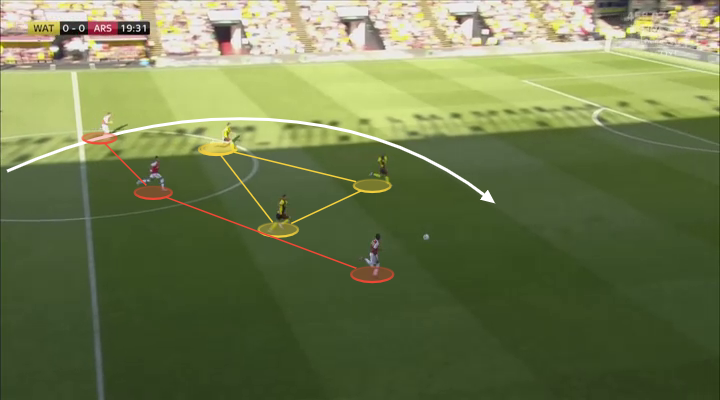 When they tried a more possession-based style of football, they were unable to break Watford’s line, lacking surprising movements or passes between the lines. They caused more danger by counter-attacking and with that style they managed to get a two-goal advantage in the first half.

Even though possession favoured Arsenal during the first half, during the second half they lost control of the game and let Watford consistently attack them, putting their defensive line very close to their goal area. This was reflected in a big swing in possession, as the last 30 minutes were fully controlled by Watford as the possession stats by Wyscout show below. The data corresponds to Arsenal’s possession. 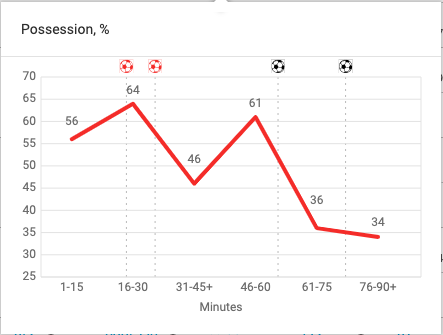 Surprisingly, in a game where the ball was not a lot of time in the middle of the pitch, one of the best performances of the game was by Watford’s Doucouré. The French-borne midfielder had to travel long distances between both goal areas, but he always participated in both the attacking and defending phases.

He was seeing recovering balls closer to his defence and at the same time getting closer to Arsenal’s goal area, being a constant support for his attacking teammates when they were not able to penetrate the visitors’ defence. He even made an inspiring run close to the end of the game that almost ended up creating the winning goal for Watford.

The sequence below shows how Doucouré starts the build-up as a sole central midfielder and ends up next to Deulofeu as an option to finish the play, in Arsenal’s goal area. 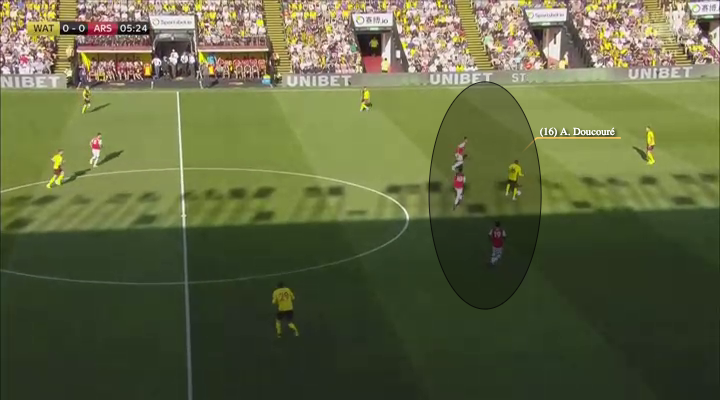 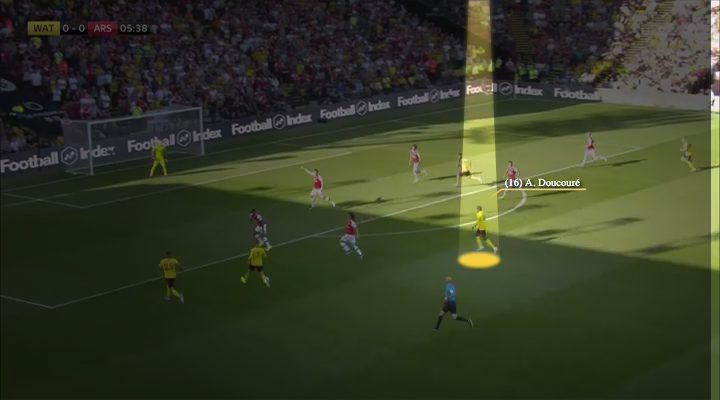 The second half was almost fully dominated by Watford. Arsenal were unable to create clean build-ups from the back and also had a very hard time getting the ball to their attackers. Their midfielders, Dani Ceballos, Guendouzi and Xhaka never showed themselves as a clear passing option and the team ended up resorting to long balls that were usually easy to deal with for the Watford defence.

In the image below the distance between Arsenal’s lines can be seen, after a long ball by their defence. There was a lack of connection between the midfield and the forward line, that made it very difficult for them to try any collective football, relying on an individual inspiration that never came. 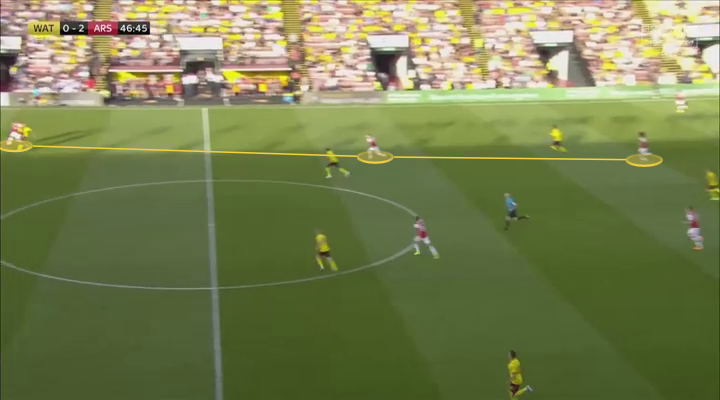 Under that scenario, Emery decided to change part of his midfield but ended up with a less possession-oriented midfield. Joe Willock and Reiss Nelson have more offensive tendency and Lucas Torreira was never able to grab the control of the game from Watford.

On a game where Arsenal needed to have more players in the middle to regain the control, Emery reduced the size of his midfield leaving Xhaka and Torreira as the only players that could generate some football and were left in numerical inferiority compared to Watford.

This image shows Arsenal having a free-kick close to the half-line of the pitch. When Arsenal needed more players in the middle to be able to control the game and the possession, Xhaka and Torreira are left alone while the other players are higher, forcing Sokratis to go long. 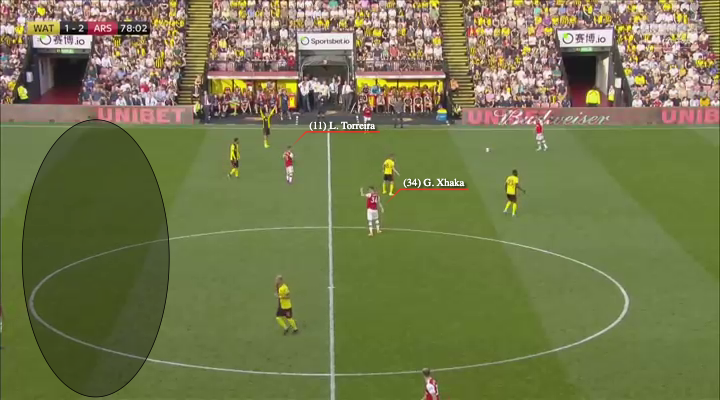 After a very attractive game, Watford ended with a more positive feeling. Even though they deserved to win, after a complicated start of the season, the quality of football they deployed leaves hopes for them in the future.

They have very good individual players and under the right direction, they should be able to fight in the top half. They have another very tough game against Manchester City, where they will be able to keep progressing in their football.

Arsenal completed their third game without winning and probably this was their weakest game so far this season. They were outplayed during the game and remained competitive mainly on their already known offensive strength.

More worrisome was the lack of response from the players and the coach to try to turn around a game that was looking very unfavourable. Instead of trying to change their tactics given the style showed by Watford, they kept insisting in their way of playing and continued to be surpassed by Watford. There is plenty of work to do if they want to return to the UEFA Champions League next season.