Despite the majority of the talk before the game being of Manchester United wanting Mauricio Pochettino to replace Mourinho, the Argentine coach seemed very focused on his work with Spurs. And, apparently, so are his players.

The game at Goodison Park closed the 18th round of matches. Spurs have played twice on Sunday this year, with two defeats, and their performance against Everton could be a moment to look back on considering that Manchester City and Chelsea both lost, respectively at home versus Crystal Palace and versus Leicester.

Everton came into the game with two losses and two draws from the last four, which becomes three losses, three draws and two wins (both at home, against Cardiff and Brighton) if we consider the last eight games, although the difficulty of the calendar should be underlined (with tough and close matches against City, Liverpool and United, all of whom were away from home).

It’s been better for Spurs, who have won ten in the last twelve games, losing only to Arsenal in the North London Derby and drawing in the Champions League with Barcelona.

Marco Silva, after the interlude with three central defenders in the last game against City, returned back to his favourite formation, 4-2-3-1, which saw the return of Walcott on the left and the use of Davies in midfield instead of Gueye, who was forced to miss the second game in a row due to injury.

For Pochettino the formation was instead a very fluid 4-4-2 diamond, which changed four players compared to the previous match against Burnley, especially for the role alongside Alderweireld given to Davinson Sanchez, the first appearance from the beginning of November for the former Ajax centre back.

This season, Tottenham have often rotated because of a long series of injuries, but have always sought the right blend on the field and it has barely been noticed, despite the short squad, with no summer purchases and the fatigue after the World Cup in the summer.

The approach to the game for Everton was intense, with pressure put high on the first opponent in order to try to immediately recover the ball and stop Tottenham being able to play out from the back easily.

The strategy changed, however, after a very short time, with Silva switching to a 4-4-2; more compact and closed, probably to try and block the spaces centrally and therefore not to allow the technical superiority of Tottenham to show.

The plan worked, at least initially, with Tottenham having a lot of possession in their defensive three-quarter and often losing the ball in midfield.

At the same time, when in possession of the ball, Everton preferred to immediately launch long or otherwise conduct quick actions and with a limited number of passes, trying to trigger the attack as soon as possible. This is Everton’s greatest strength, as it can count on a mix of speed, physical, technical and fantasy. 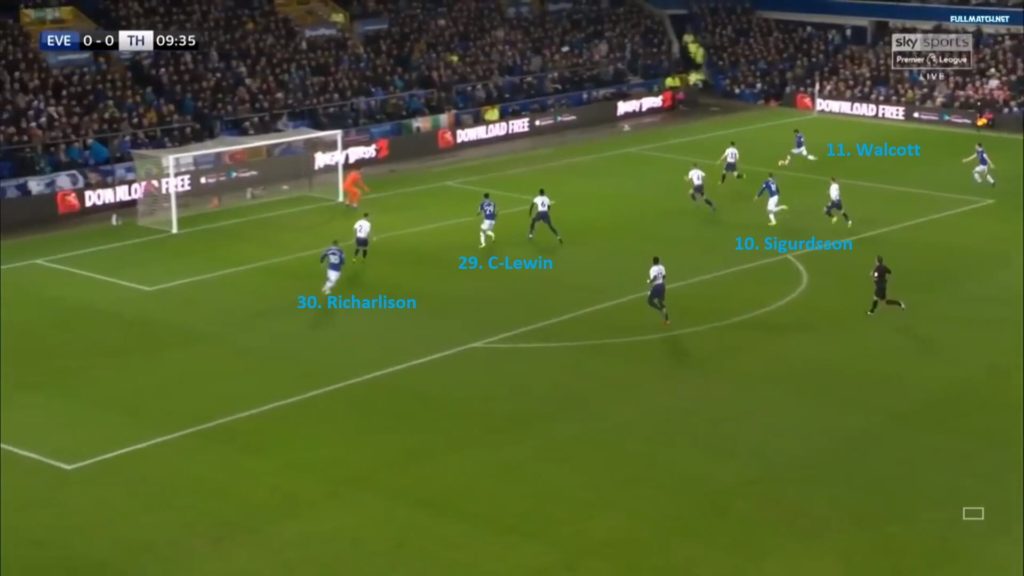 Photo 6. A fast restart of Everton conducted in the left lane, with Sigurdsson widening for Walcott, who crosses to the centre towards Richarlison, who sends out a head-hit, into a 2v2 inside the penalty area.The countermove of Tottenham was not long in coming and focused on hitting the real weak point of Everton: the defensive line. The Everton back four play very high, and leave infinite space behind them, which Spurs explored for the first time after 11 minutes with a great bit of movement from Harry Kane; something that would happen a lot during the game.

Within four minutes, Tottenham created four dangerous situations that displayed Everton’s defensive weakness, thanks to their offensive trio composed of Kane, Son and Dele Alli, fast attackers and good on the ball but also and above all capable of cuts and movements without the ball, which become a real puzzle for the Toffees.

But the Toffees also suffered in midfield, where the absence of Gueye (the Senegalese is first in the Premier League for tackle per match, 4.4, and for total tackle, 66, after closing last season in second place of this ranking with 117) is so important. The young Tom Davies, making just his sixth appearance of the season, couldn’t replace him properly.

In this tactical context, Everton moved forward in the 20th of the first half. Sanchez launched long out of the defence and the ball was recovered by Everton who immediately launched centrally where Winks mistimed his jump. Gylfi Sigurdsson was very good at finding Dominic Calvert-Lewin and the defence of Tottenham is caught by surprise, at first with Sanchez who remains halfway in the pass, and then with Davies, who does deal with Theo Walcott.

It is interesting to note how the Colombian defender lost an almost identical ball in the fourth minute after winning a physical duel against Calvert-Lewin’s speed.

After a couple of minutes, Walcott and Calvert-Lewin linked again, this time with the former Arsenal player crossing for the striker, who scored again in a physical duel with Sanchez. However, the referee believed it was a foul and the goal was disallowed.

The good moments of Everton stopped abruptly at 26′, when from a long ball – apparently innocuous – by Dele Alli caused a defensive misunderstanding between Kurt Zouma and Jordan Pickford. The England goalkeeper collided with his defender outside of the box meaning Heung-min Son had the clear chance to equalise.

For the Everton and England international goalkeeper, this is the third direct error that has lead to an opponent’s goal in this season, and comes in the month of December that has already seen him at fault for the Liverpool winner in the Merseyside Derby.

The continuous horizontal movements of Son were a constant thorn in the side for the Everton defence which failed to stop him. On the 35′, a central Sissoko initiative found Son on the left, with the no. 7 winning the duel against Keane and Coleman before shooting. Pickford saved but as unable to move the ball away from the danger zone and Dele Alli followed up to score.

Five minutes later it is always the Korean, this time from the right. Son won a free kick from a very good position with a movement inside. On the kick, Pickford dives in a way not conducive to stopping the ball that hits the post and bounces in the middle of the area where it finds Kane’s tap-in, alone and again without any defensive marking.

In first-half stoppage time, the Everton goalkeeper is again at fault for a reckless challenge on Dele Alli, with the game stopped for offside, hitting the English playmaker in the leg and probably resulting in the hamstring injury that forced him to leave the field at halftime (replaced by Lamela).

Two minutes after returning to the field, Spurs scored again. The move was identical to those of the previous goals, with another long ball deep to Kane, who cut into the space between the two central defenders – with Zouma wide and out of position, and Keane slow in closing towards the English striker – and then put the ball in the middle, where Coleman produced a poor defensive header. Christian Eriksen’s volley from outside the box was technically well struck but again, Everton’s poor defensive structure was their undoing.

If you think the emotions are over here, however, you’re wrong. Two minutes later Everton found the net again, this time with a combination of Richarlison and Sigurdsson: the former Watford man received on the left and went inside, serving the Icelandic who, after a defensive miss by Sanchez, made it 2-4.

Everton, however, suffered another bad blow with a recurrence of a physical problem for Andre Gomes, which forced him to leave the field and be replaced by Schneiderlin. The former United man missed the first three passes of his game, and failed to add anything to the match.

As in the famous scene from the Simpsons, with still half an hour to go the game was likely to turn into a humiliation of disproportionate size. Marcos Silva did nothing on the tactical plan to try to change things, and continued to suffer both the numerical inferiority in midfield – with Sigurdsson too far from the two midfielders – and the positioning of its defenders – high and not very reactive.

Davies is then caught between a vertical pass in midfield and finds himself chasing Lamela centrally, with the Argentine able to serve Son on his – again – cut between the two central defenders, finding the goal between the legs of the opposing goalkeeper (for him, in the last six appearances in the Premier League, four goals and one assist).

The sixth goal was by Kane, anticipating Zouma in the centre of the box on a cross from the left by the omnipresent Son. For the English striker this is the fourth consecutive brace against Everton, a record shared with Michael Owen (who scored four braces in a row against Newcastle).

For Everton it is – of course – the worst defeat of the season, the second at home and the sixth overall in the Premier League, in addition of being the 23rd consecutive defeat against a “big six” (the last victory dates back almost two years ago, in a 4-0 against Manchester City in January 2017). Currently, they have slipped to 11th place, in the middle zone of the ranking, in a place where they probably do not deserve to stay.

The Spurs are now two points from Manchester City and six points from Liverpool, in a title fight that is anything but closed.

Everton have defensive issues they need to address; this is not the first time this season they have been found to be playing too high and susceptible to the direct attack.

For Tottenham, Pochettino’s flexible tactical approach once again paid dividends and they are very much in the title-race. 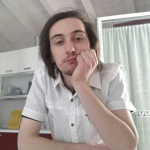