LigaNOS champions Benfica and Taça de Portugal winners Sporting CP both travelled down from the capital to the neutral Estádio Algarve for the season’s traditional curtain-raiser.

The league champions made it clear that they intend to pick up where they finished off last season as they stormed to a 5-0 win over their local and historic rivals.

Despite a relatively balanced first half with few clear-cut chances, Benfica managed to fully capitalise on certain tactical deficiencies of Sporting in the second half. This tactical analysis will look at how Sporting failed to spot the warning signs and ultimately paid the price with this heavy defeat. 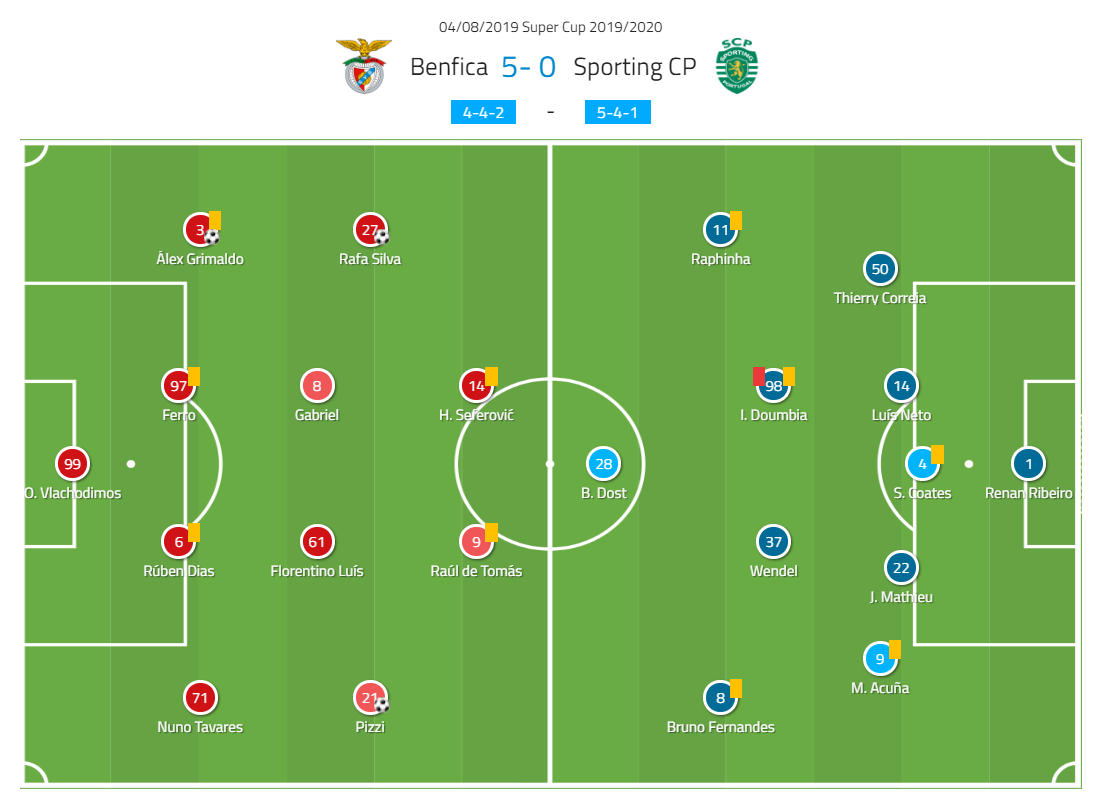 Benfica manager Bruno Lage set his side out in their usual 4-4-2 formation, with Raul de Tomas partnering Haris Seferovic up front in place of the departed Joao Felix.

The 19-year-old defender Nuno Tavares was given an opportunity to impress at right-back having recently signed a new contract to keep him at the club until 2024.

On the opposite bench, Sporting CP boss Marcel Keizer was more daring with his selection, switching from his preferred 4-3-3 to the 5-4-1/3-4-3 system which he experimented with at times last season.

This meant that new signing Luiz Neto would make his debut in central defence alongside regulars Coates and Mathieu. Another new face was youngster Thierry Correira, who came in at right-back as the usual incumbent Stefan Ristovski and new signing Valentin Rosier were unavailable through injury.

From the very beginning of the game, it was clear that Benfica were intent on pressing Sporting in the centre of the pitch. As Sporting played out from the back, the Benfica forwards tried to crowd out Sporting’s central midfield pair of Doumbia and Wendel and block any passing lanes that opened up between them and Sporting’s central defenders.

In the image above, striker Raul de Tomas has dropped deep and wide players Rafa and Pizzi have tucked inside to give Benfica a particularly narrow shape resembling a 4-2-3-1 as they attempt to dominate this area of the pitch.

Both Doumbia and Wendel are comfortable on the ball and can be considered to be “press-resistant” in the sense that they can shield the ball well under pressure. Despite the constant harrying from their opponents they generally succeeded in receiving the ball from the centre backs and even managed to beat the press on occasion, managing to launch some attacking moves. Their respective passing accuracy in this match is a testament to this: Doumbia was successful in 92.9% of his passes and Wendel completed 90.2% of his.

However, they weren’t able to keep this up for the whole game, and Benfica managed to force some mistakes as Sporting tried to play out from the back.

In this instance, support striker Raul de Tomas is alert enough to intercept Neto’s pass intended for Wendel. It’s curious that Sporting were so insistent on playing through the middle with the danger posed by Benfica’s attackers. Neto had full-back Thierry Correira free in space to his right, yet he chose to play the much more risky pass into central midfield.

Sporting’s insistence in playing out from the back in this way finally caught up with them in the second half. Already 2-0 down by this stage, Raul de Tomas pressured Mathieu into playing a weak pass to Wendel just as Pizzi popped up to steal the ball from him and play in De Tomas. Sporting centre-back Coates was then forced to foul De Tomas to prevent him playing in Seferovic and Benfica’s left-back Grimaldo was on hand to convert the resulting free-kick, effectively killing the game at 3-0.

Benfica made it clear from their off-the-ball approach that they wanted to dominate the area between Sporting’s defence and midfield and their tactics in possession were no different.

As we can see from this image, Sporting left rather large gaps between their lines, which Benfica were able to exploit. Here we see more clearly the 4-2-3-1 shape that they assumed as they looked to flood the central half-spaces. 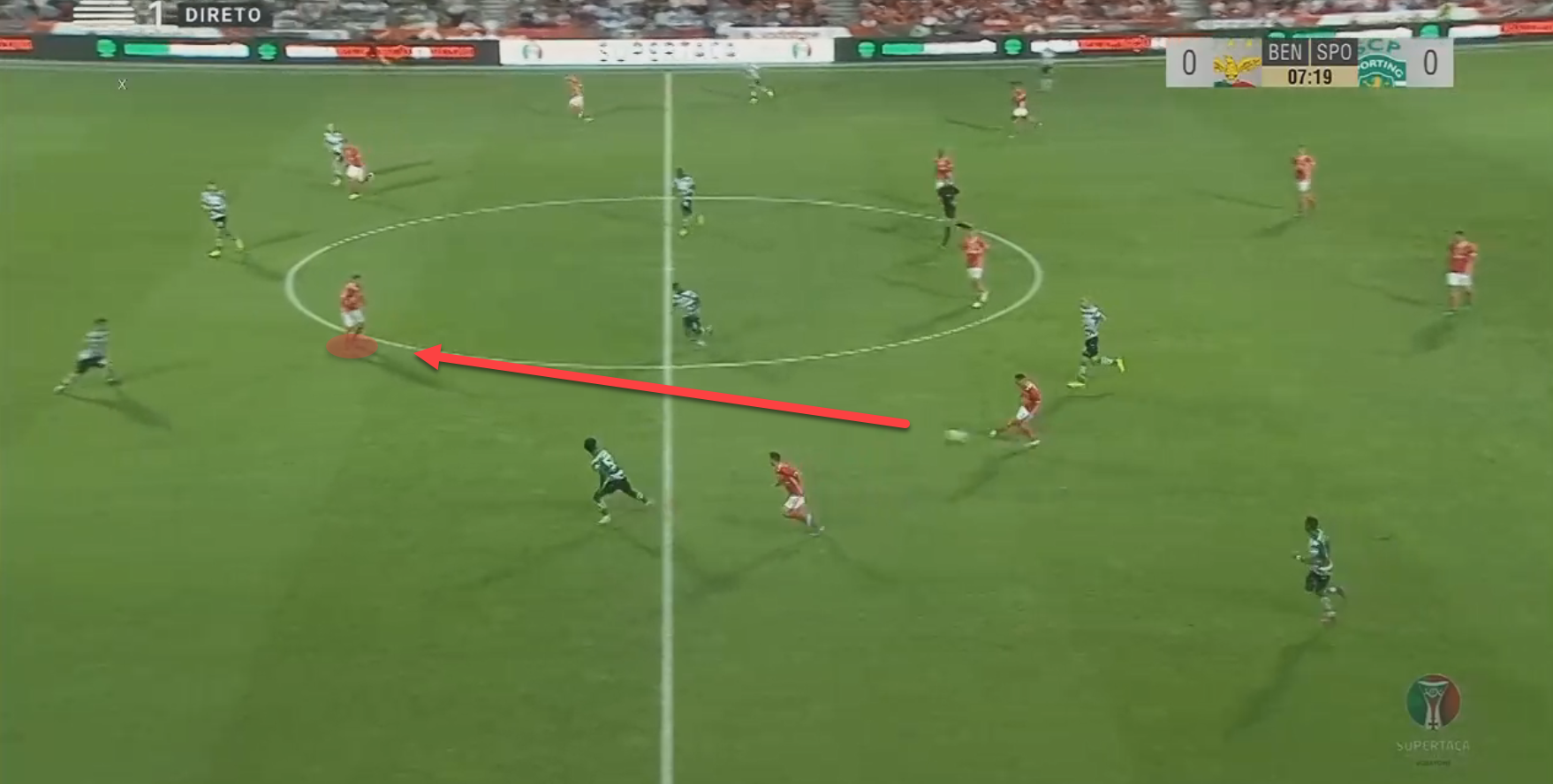 Raul de Tomas, in particular, liked to drop deep into this space to receive passes from the midfield where the passing lanes were wide open.

Sporting struggled to cope with this throughout the game, with the central defenders often having to step up into the space which increased the risk of conceding fouls and disrupted the shape of the backline.

Unlike their rivals Benfica who seemed to have a clearly defined pressing strategy that focused on central areas, Sporting seemed somewhat disjointed and out-of-sync without the ball.

One of the reasons for this was that the three forward players did very little to help out their teammates when it came to pressing in deeper central positions. The central pivot of Doumbia and Wendel were particularly affected by this as they were torn between holding their position and stepping out to press their opponents. 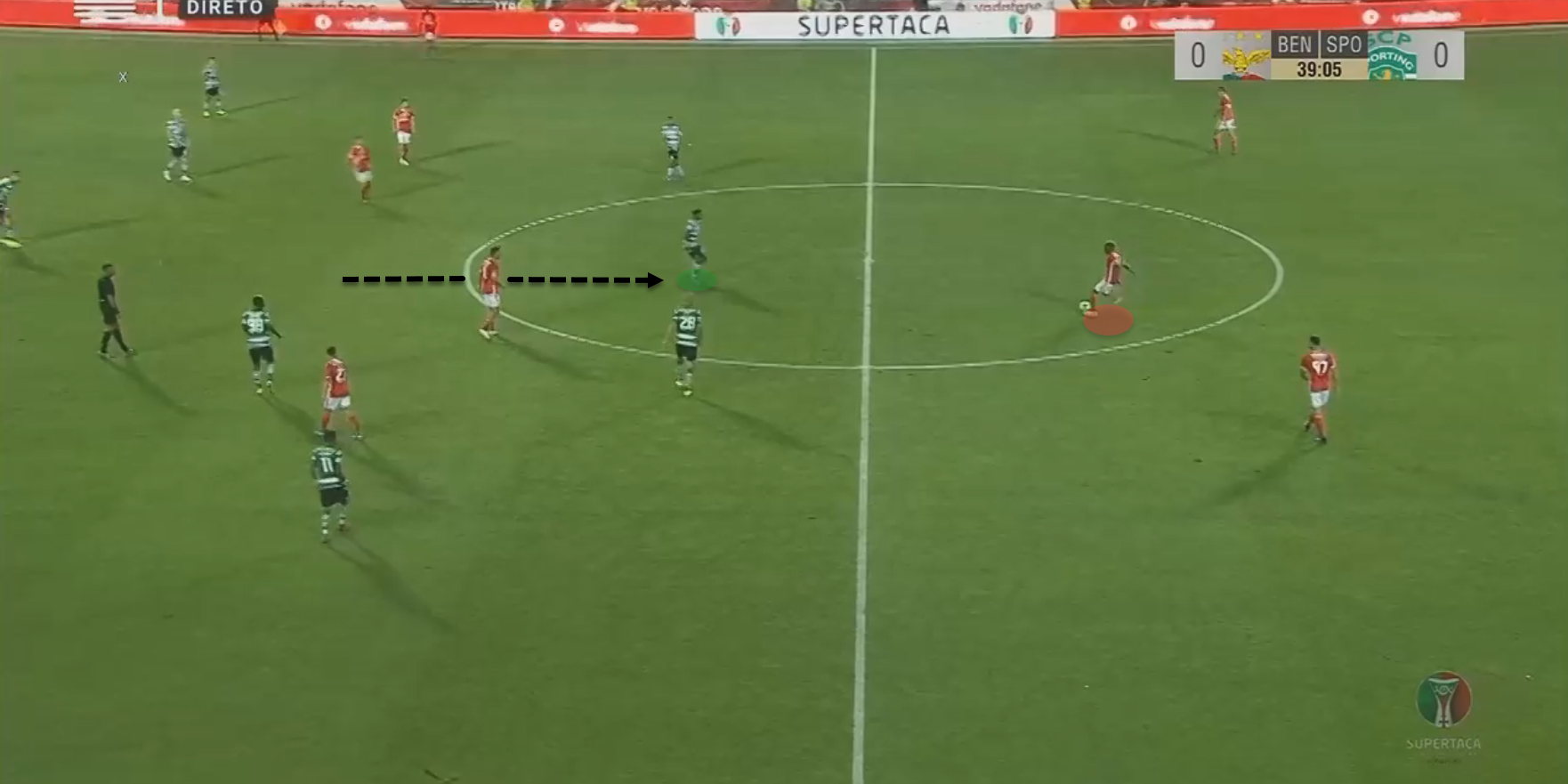 In this image from just before Benfica’s opening goal, we see how Wendel has stepped out from the centre of midfield to try to block the pass from Florentino. Striker Bas Dost is standing level with him, yet has made no attempt to engage the Benfica midfielder.

This meant that Florentino was able to find a teammate between the lines, and after a prolonged exchange of passes between Sporting’s lines Benfica were able to manoeuvre the breakthrough.

The same pattern continued in the second half yet Sporting failed to adjust their approach. They had no cohesive plan in place to stop Florentino from spraying the ball about in these areas, which is why the 19-year-old managed to record a passing accuracy of 94.6%, more than any other player on the pitch.

And it was from such a move that Benfica eventually scored their second of the game.

In this image, we see how Pizzi once more finds a pocket of space in the half-space where he knows there will be no Sporting player to pick him up, especially since Wendel has stepped out to close down Rafa. When Pizzi receives the ball, Acuña must step out to engage him, at which point Pizzi releases full-back Tavares with a back-heeled pass. This was the beginning of the move which led to a failed clearance by Mathieu, which Benfica capitalised on as Rafa pounced and found Pizzi in space, who made it 2-0.

Benfica’s second goal was quickly followed by Grimaldo’s free-kick that made it three. It was at this point, on 66 minutes that Marcel Keizer made some changes to his side. Off came Bas Dost and a furious Sebastian Coates to be replaced by striker Luiz Phellype and wing-forward Abdoulaye Diaby. 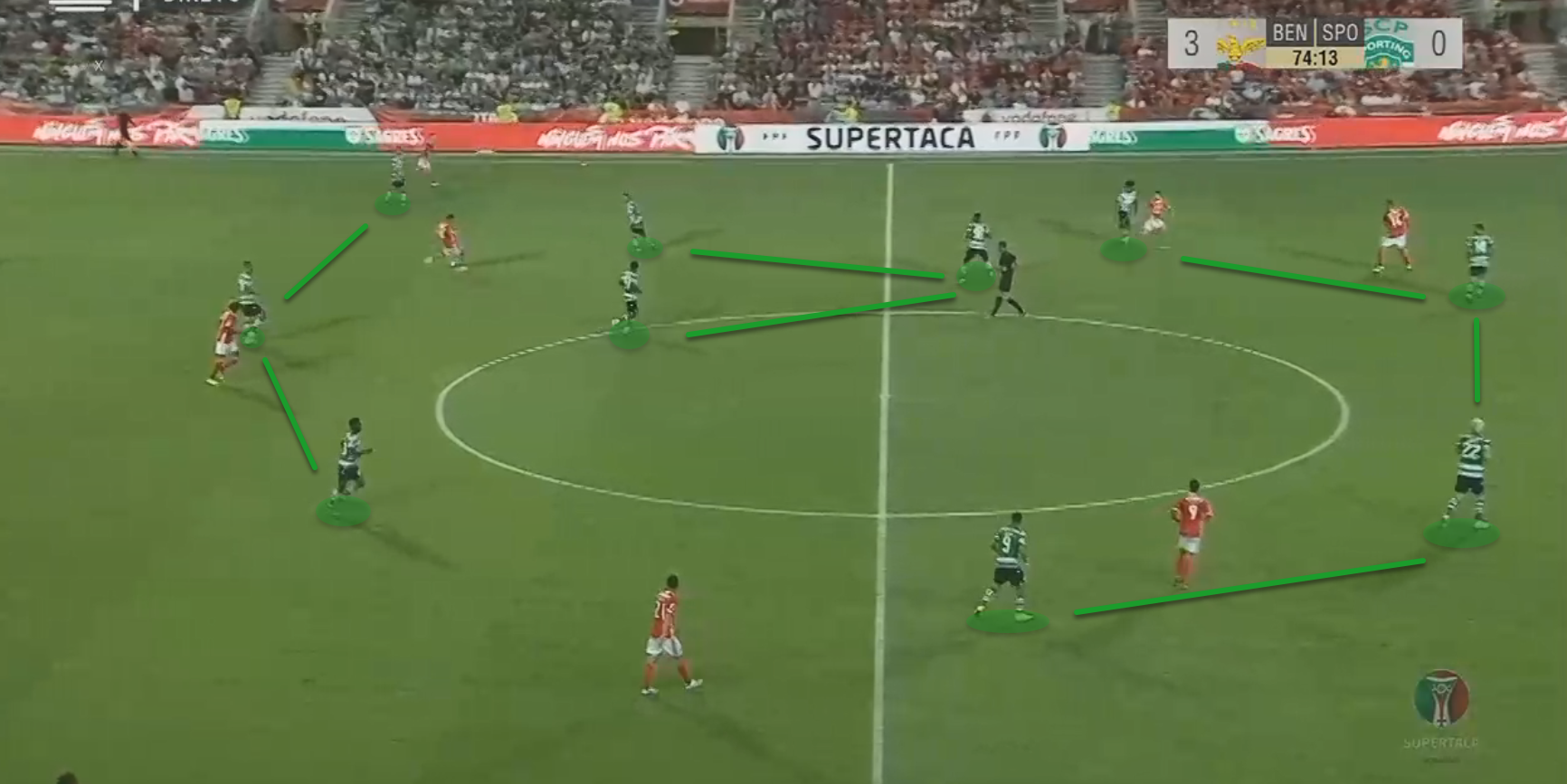 This signalled a change in formation as Sporting reverted to their usual 4-3-3. This meant Bruno Fernandes dropping into midfield (though he would continue to play with a lot of freedom) and Diaby, Phellype and Raphinha forming the front three.

This did provide some brighter moments as Diaby’s presence on the left-wing allowed them to stretch Benfica more as Sporting now had two natural wide players on each flank. One bright spark was youngster Thierry Correira at right-back, who made runs into central areas that disrupted Benfica and created some interesting moves for Sporting.

Sporting were now getting more players forward in their attacks, as Diaby, Phellype, Fernandes and Raphinha had license to express themselves. In the first half, a lack of bodies going forward had limited Sporting to hopeful long shots and attempts to play in the front three too early, which often left them caught offside.

By this stage, however, Sporting’s heads were down and they were struggling to match their opponents’ ability to charge up and down the field in transitional phases. There was no greater example of this than Benfica’s Pizzi.

As Gabriel picks out the run of Rafa into space down the left-hand side, notice the starting position of Pizzi on the opposite flank.

As Rafa succeeds in securing the ball and holding it up for support, Pizzi arrives (ahead of any Sporting midfielder) to receive Rafa’s pass before charging into the box to score Benfica’s fourth of the night.

Things would go from bad to worse for Sporting as Benfica substitute Chiquinho made it five in injury time following Idrissa Doumbia’s dismissal after picking up a second yellow card.

The game was won and lost long before that though, as Sporting failed to find solutions to the problems posed by their rivals. To put it simply, Sporting were asking too much of their central midfield pairing Doumbia and Wendel.

The pair were tasked with receiving the ball in central areas under heavy pressure as Sporting failed to explore alternative ways of playing the ball out. And as this analysis has shown, their teammates ahead of them did not provide adequate support in closing down the opposition, leaving them outnumbered and exposed in the centre of the park.

Benfica, on the other hand, showed that they had a clear tactical gameplan, and they executed it ruthlessly, showing impressive desire and fitness levels for what was their first competitive game of the season. If they can carry this form into their league campaign they will be confident of retaining the LigaNOS title.