Racing Louisville hosted Houston Dash in the second game of the season for the NWSL Challenge Cup and the match saw Houston Dash completing a comeback and winning their first three points of the season despite playing away. They were able to bounce back after their worrying loss against Chicago Red Stars in the first match as they were more decisive in the final third this time, even though their defensive performance still needs more improvements.

On the other hand, Racing Louisville failed to protect their 2-0 lead and lost an opportunity to win their first match of the season since they drew in their first match against Kansas City. Racing Louisville will need to study their mistakes and make sure to improve what went wrong for them in this match especially from a defensive perspective in order to avoid such scenarios in the future.

This tactical analysis article will cover Houston Dash’s comeback while focusing on Racing Louisville’s defensive errors and exploring both teams’ attacking organisation and tactics to see how both teams will look at the start of the NWSL.

Racing Louisville didn’t make major changes compared to their previous match since they started the game with a 4-3-3 formation relying on Katie Lund as goalkeeper, Nealy Martin, former Chelsea, Liverpool and Manchester City’s Gemma Bonner, Addisyn Merrick and Emily Fox in defence, Cece Kizer, Jaelin Howell and Freja Olofsson as central midfielders with Lauren Milliet and Kirsten Davis playing on the wings and creating a front-three with the striker Jessica McDonald.

For Houston Dash, James Clarkson preferred to start this match relying on the 4-2-3-1 formation with Jane Campbell as a goalkeeper, Haley Hanson, Katie Naughton, Sophie Schmidt, Allysha Chapman in defence, Marisa Viggiano and Kelcie Hedge as central midfielders, Nichelle Prince and Maria Sánchez on the wings with Shea Groom playing as an advanced playmaker behind the former West Ham striker, Rachel Daly. 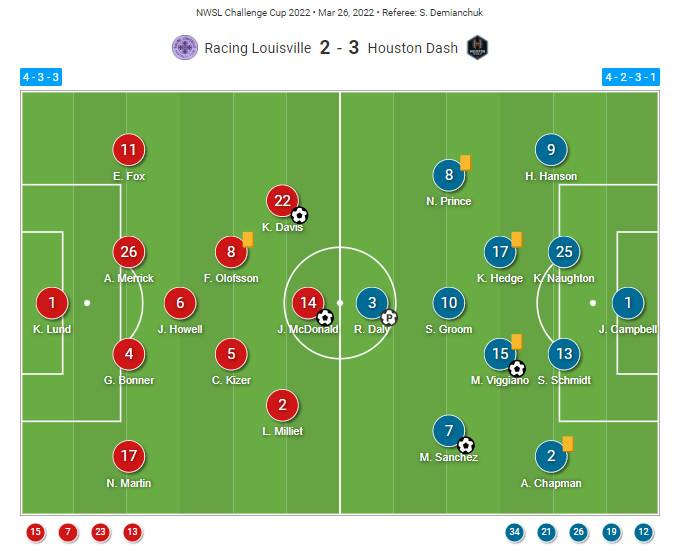 Houston Dash started the match with determination to play better than last time and they were successful in starting well by circulating the ball, pressing high and attempting to serve Daly into space even though she was marked. Yet, this did not continue because Houston Dash fell in the trap of committing big defensive mistakes once again at the 15th minute when Schmidt got confused due to Racing Louisville’s pressing and gave a strange backward long pass, allowing Davis to reach Naughton before the ball falls down and disturbs her in order to deflect the clearance. Schmidt was not the only player who committed an individual mistake in this action but Naughton looked too fragile too since she didn’t look at her surroundings before receiving the pass to see if there was a close player. Moreover, she didn’t protect the ball and opted for a nondetermined clearance using her weaker foot. This poor decision-making inside the box was punished by a goal for Racing Louisville thanks to the excellent anticipation of Davis. 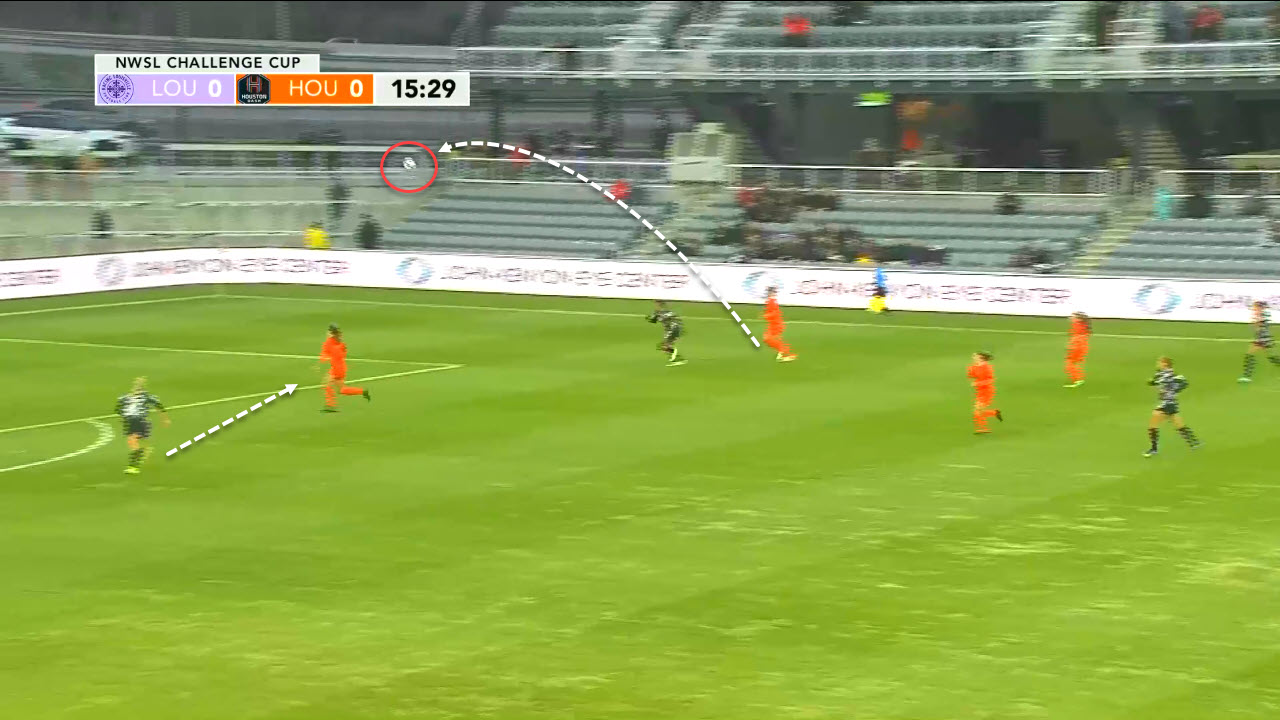 In the 39th minute, Racing Louisville were able to add a second goal thanks to the great finishing of McDonald and her excellent volley following a bad clearance from Naughton. The action started with the penetration of Milliet on the right-wing and a cross to the near post where Davis attracted two defenders to her, leaving a lot of space on the far post where Olofsson was heading. More importantly, there were no midfielders in front of the two centre-backs in order to collect second balls or prevent their opponents from shooting, and that’s a reason why McDonald was able to shoot with success following Naughton’s clearing header. Such errors need to be addressed before things become too serious for Houston Dash and especially to not let these positioning and clearing mistakes transform into habits.

Despite winning the match at the end of the day, Houston Dash conceded five goals in a match and a half. This reality resumes Houston Dash’s defensive state and proves that a lot of improvements still need to be made at this stage. 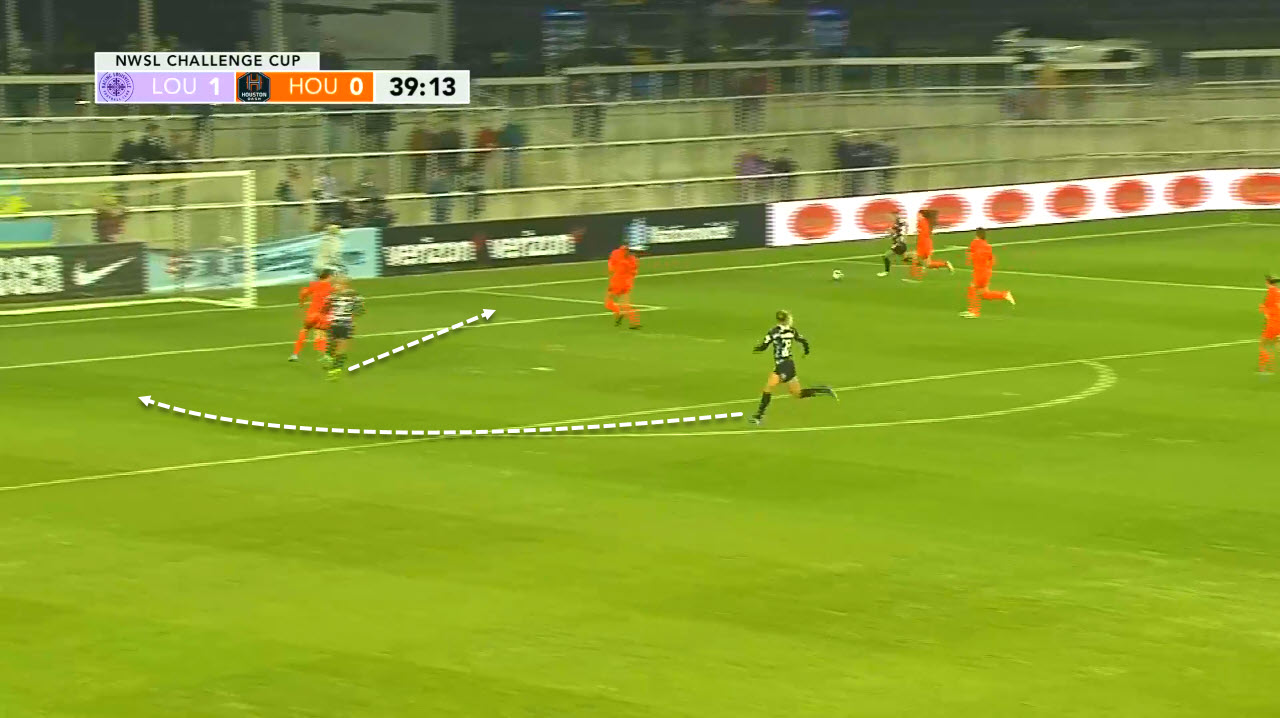 Houston Dash were unable to create dangerous chances in attack throughout the first half. The first real chance for them occurred at the 52nd minute when Prince penetrated inside the box and tried to serve her teammate who was waiting near the far post. But luckily for Racing Louisville, Martin was attentive enough and well-positioned to intercept the pass at the edge of the goal line, saving her team from a dangerous goalscoring chance.

It should be said that Racing Louisville were more accurate in shots compared to Houston Dash, with an average of 71,43% shots on target against 54,55% for Houston Dash. Yet, the latter have an excellent xG equalling 2,02 in general and 3,01 in this match while Racing Louisville’s general xG is 1,05, with 0,87 in this match. These statistics explain that Houston Dash are capable of scoring goals with fewer created opportunities than their opponents and that they are decisive inside the box so far. 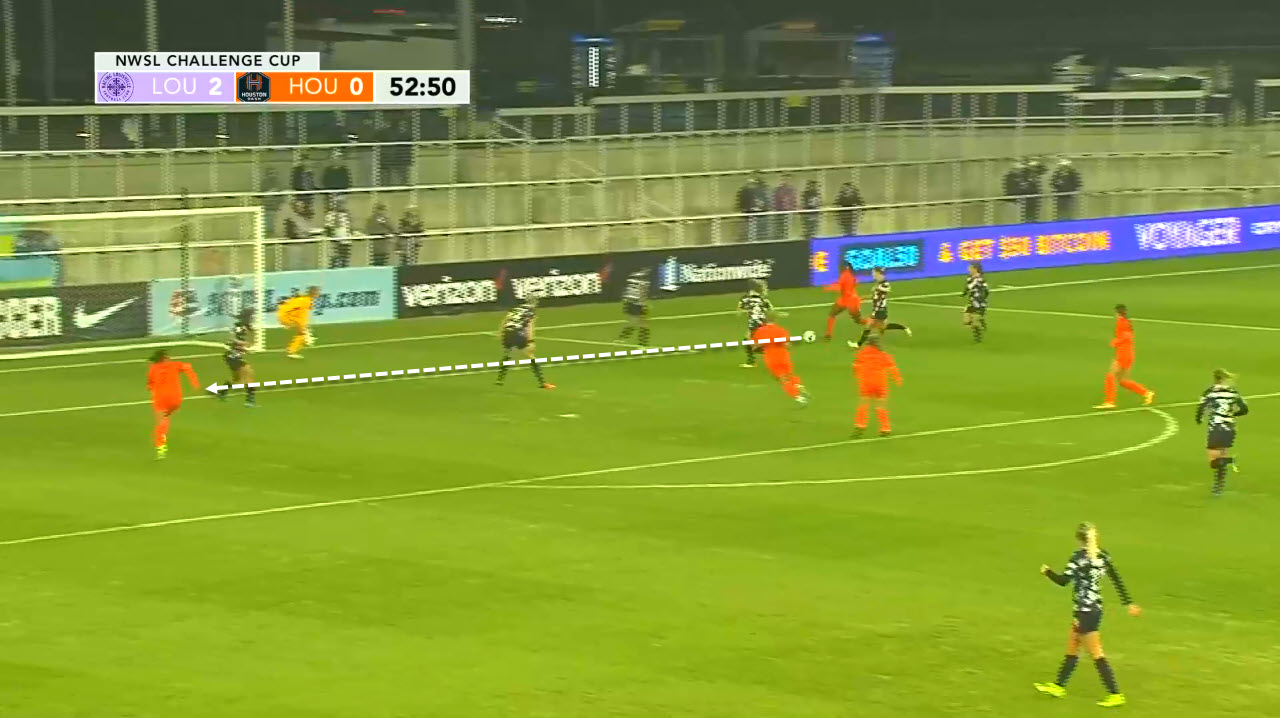 One of Houston Dash’s best used attacking weapons this season so far is set-pieces. Houston Dash were able to score from set-pieces against Chicago Red Stars and scored their first goal against Racing Louisville from an indirect free-kick as well. Maria Sánchez exploited the confusion created inside the box following Daly’s free-kick cross and executed a powerful volley using her left foot to start the comeback journey for her team. This goal also shows some clear defensive mistakes from Racing Louisville who failed to clear the ball away and gave it away to their opponent easily. They will also need to address these defensive positionings as well as their clearances’ directions rules in order to avoid conceding this type of goal in the future. 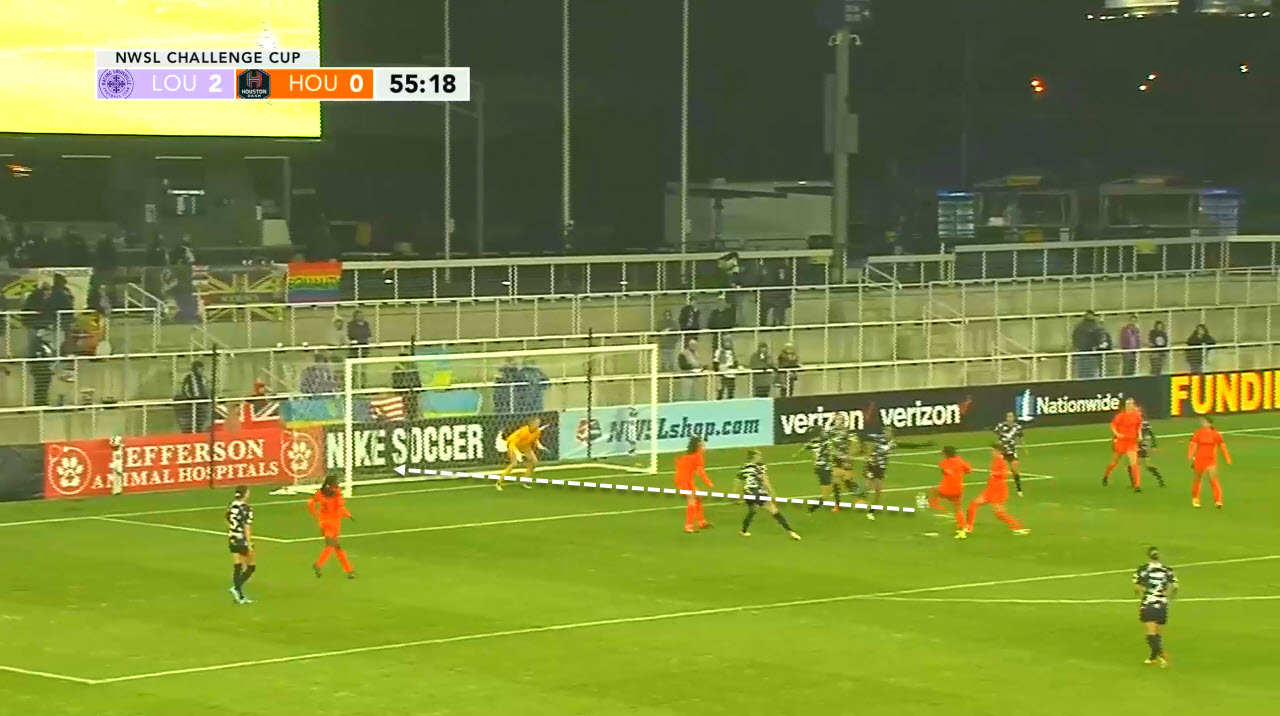 Houston Dash preference of playing wide using their talented wingers Sánchez and Prince to then cut inside or penetrate inside the box help the team a lot in reaching their opponent’s goal and that was clear in their second goal action. The credit here goes mainly to Sánchez who received the ball on the left wing, dribbled past her direct opponent with excellent skills and served Viggiano who was on the receiving end of the pass, scoring the equalising goal with a lot of confidence and determination. Sánchez is actually in continuous development and she has just shown in this match that she can lead her team to further wins in the upcoming games of the season by scoring goals with the help of Daly, Prince as well as the midfielders. 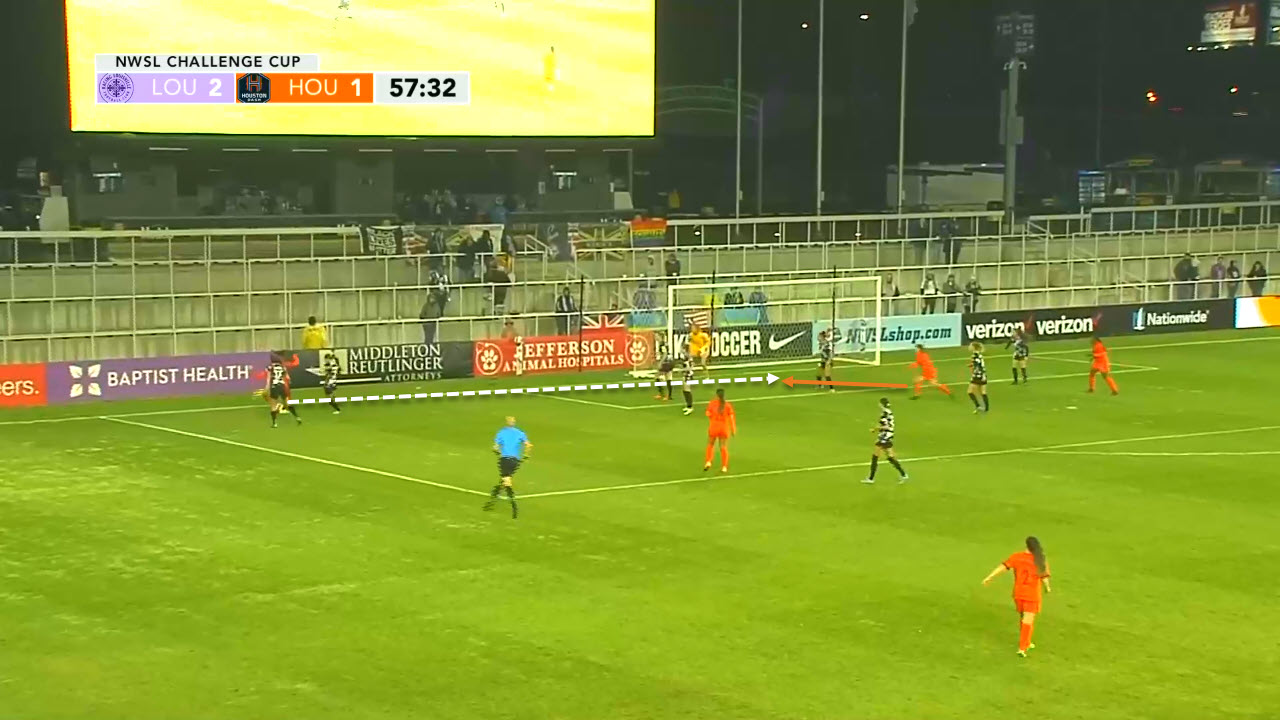 Daly was then able to win a penalty using her dribbling skills inside the box to get away from her direct opponent before hitting Bonner’s hand. She succeeded in scoring that penalty to give her team a deserved lead after being behind in score for more than 60 minutes. Afterwards, Houston Dash became more motivated and advanced with more determination in attack as Sánchez shot a very dangerous free-kick that was saved with difficulty by Lund and Viggiano was also able to shoot from distance but without success. In the meanwhile, Racing Louisville looked demotivated and weren’t able to threaten Houston Dash’s goal in the end of the game, leaving the score 2-3 for Houston Dash.

Houston Dash got an important away victory against a tough Racing Louisville side and that will be fundamental for the players’ motivation going forward. Nevertheless, Houston Dash’s defensive problems are still worrying and can only make the team struggle in the future if not addressed very soon.

On the other side, Racing Louisville’s attacking performance was solid but they failed to protect it given that they committed a lot of defensive errors and weren’t able to keep up with Houston Dash’s powerful attacking players especially on the wings. Yet, they should learn the lesson and defend better next time while keeping the same attacking determination in the upcoming games.