As the MLS regular season nears its end, two of the top teams in the Eastern Conference faced off. The New England Revolution hosted the Philadelphia Union in Massachusetts in a tightly contested match.

Led by former USMNT coach Bruce Arena, the Revs had won three and drawn once in the previous five games. Having enjoyed such a strong run has put them competing against the New York clubs for fifth in the Eastern Conference. A win against the Union and New England would be tied for fourth place.

Jim Curtin’s Philadelphia Union have been contending at the top of the Eastern Conference for the majority of the season. Sitting one point ahead of Columbus, the Union were looking to solidify second place and gain ground on Toronto FC.

After surviving a late flurry from New England, the Union were able to secure a win. This tactical analysis will look at how Philadelphia frustrated the Revs, and how New England almost equalized after an adjustment.

Bruce Arena lined his team up with the intention of using the width given to them by Philadelphia. While the Revs were missing their captain and former La Liga player, Carles Gil, through injury, they could still count on leading scorer Teal Bunbury. New England’s front four have scored a combined 10 goals. Former Manchester United left-back Alexander Büttner is also an attacking threat, with a team-leading three assists. 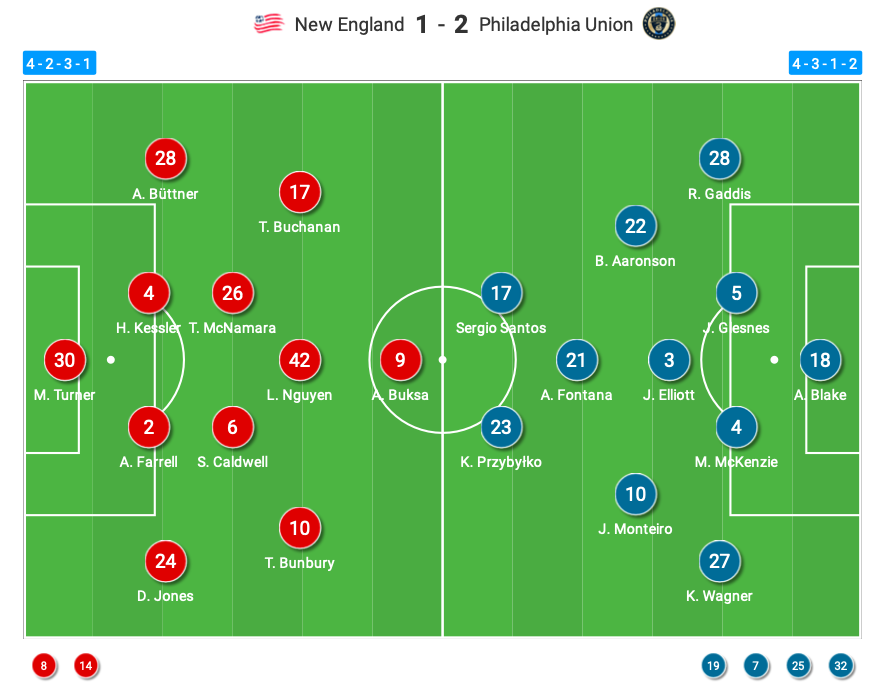 The Union boasts one of the toughest defences in MLS, and it was on full display against New England. Using a mixture of high pressing and denying space, Philadelphia was able to force the Revs into shots that barely tested Andre Blake. This combination of defensive tactic can be seen in their pressing intensity below. With a pretty even-keeled average of 10 passes per defensive action, the Union were able to control New England. 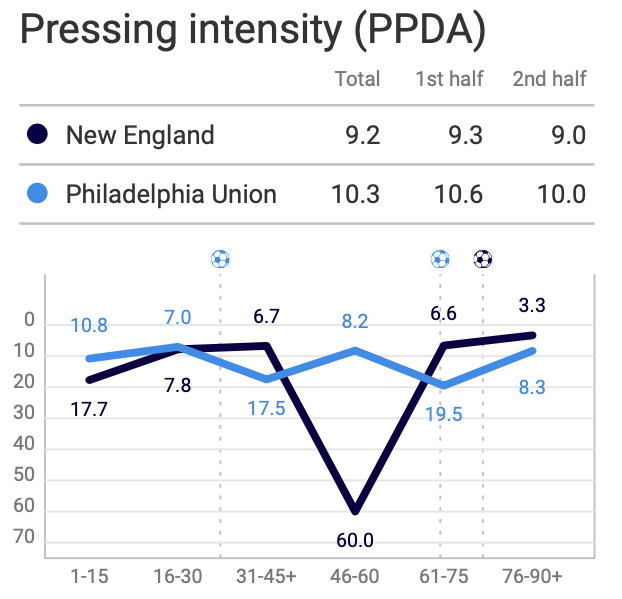 Using an example from the first half, we can see Philadelphia’s defensive discipline in action. As the ball moves to their right flank, Aaronson slides over to help Gaddis defend. Elliott screens any pass to the centre forward, while Monteiro and Fontana shift to cover the central area and halfspace. 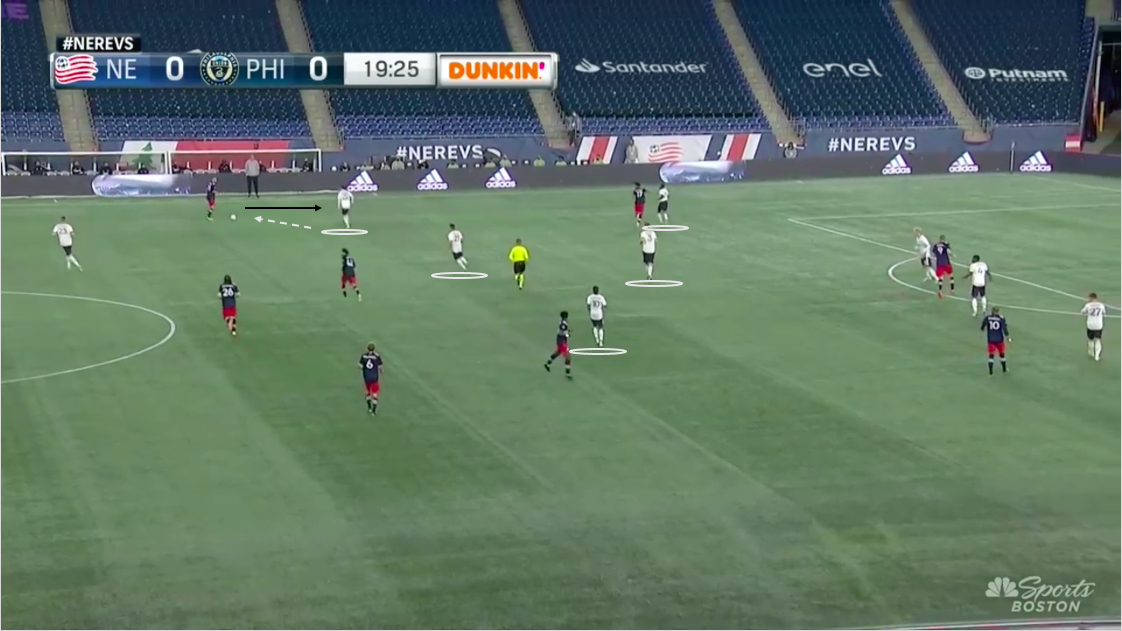 Aaronson’s tasked with pressing the left-back and only allowing a pass down the line. Once the ball arrives at the left-winger’s feet, Gaddis pressures and does not let him turn. As the left-back moves to overlap, Aaronson tracks his run. 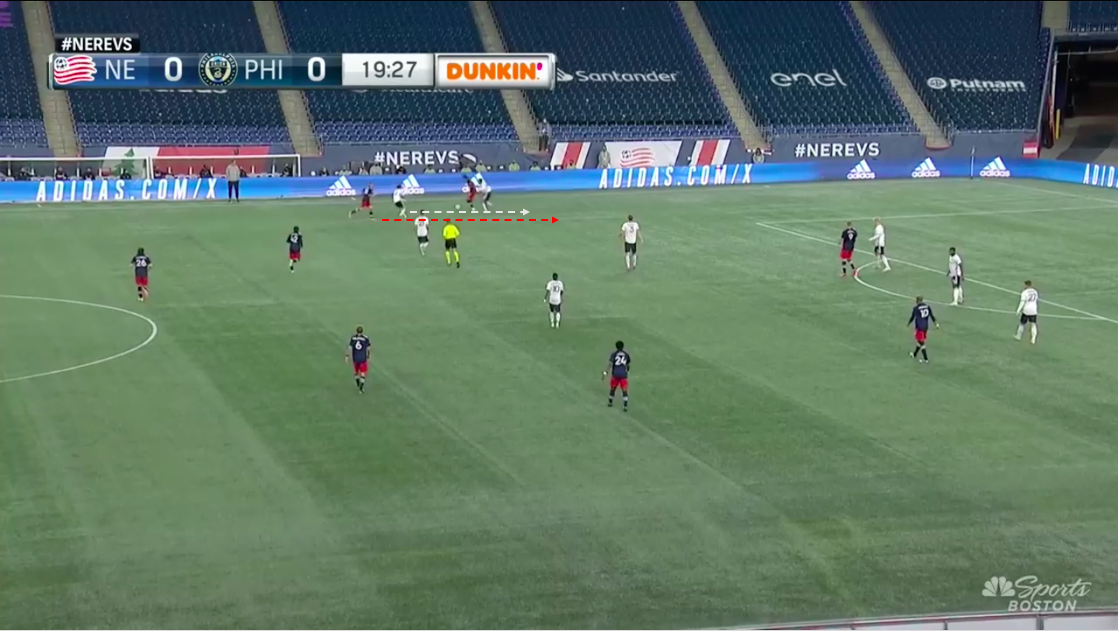 This sequence forces the Revs to restart their attack with one of the deep-lying midfielders. The resulting diagonal pass goes out of bounds and Philadelphia assumes possession of the ball. 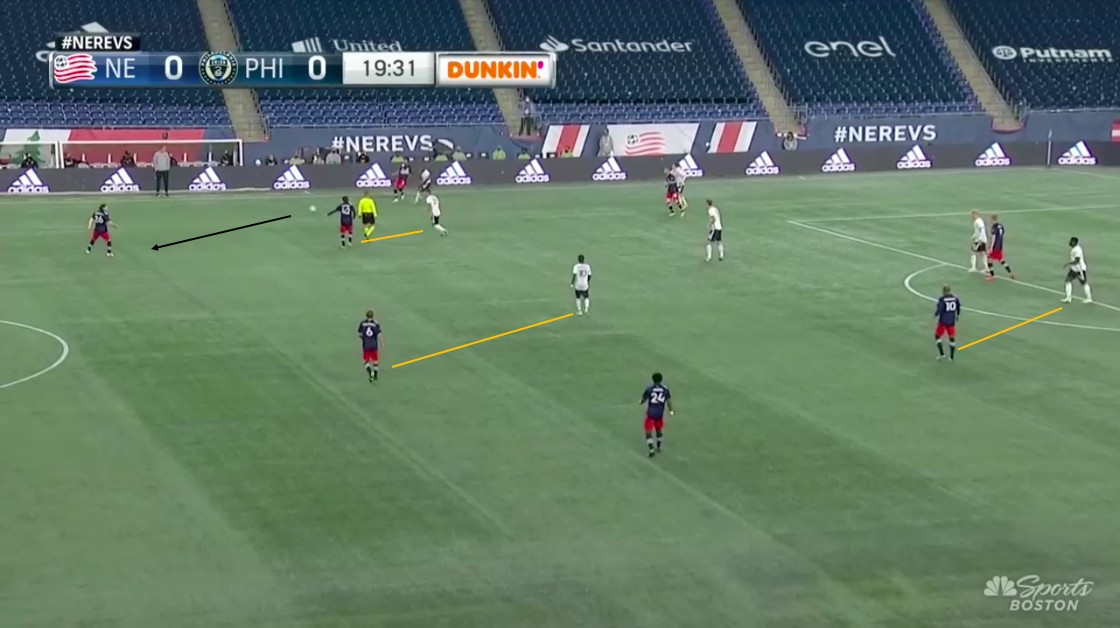 Although Philly allowed New England to take 21 shots, only eight were on target. Below we can see an analysis of the Revs shots throughout the match. Of those, four shots were inside the penalty area. Each of these shots was heavily contested, with the Union blocking seven and forcing six shots wide. 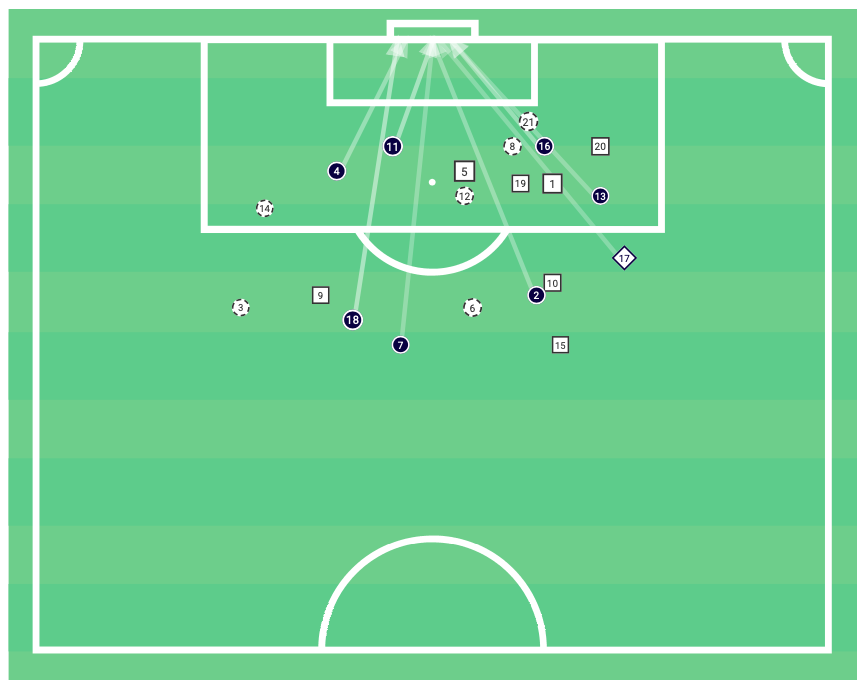 New England was able to enjoy 55% possession throughout the game, testing Philadelphia on both flanks and through the centre. Below we can see their attacking preferences. Their ability to attack in the channels was due to a combination of their natural width and Philadelphia’s narrow shape. 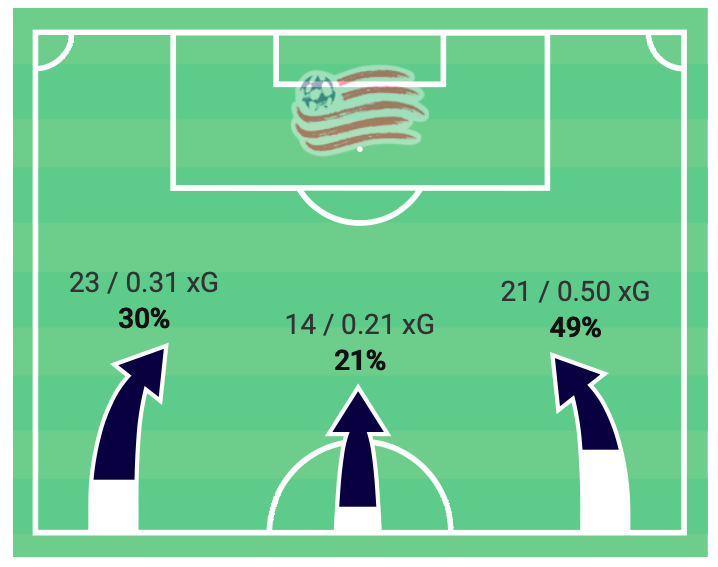 The Revs attempted to switch play through their double pivot and pushed their outside backs high and wide. Using their most frequent passing combinations as a reference, we can see the width being provided by Büttner and Jones. 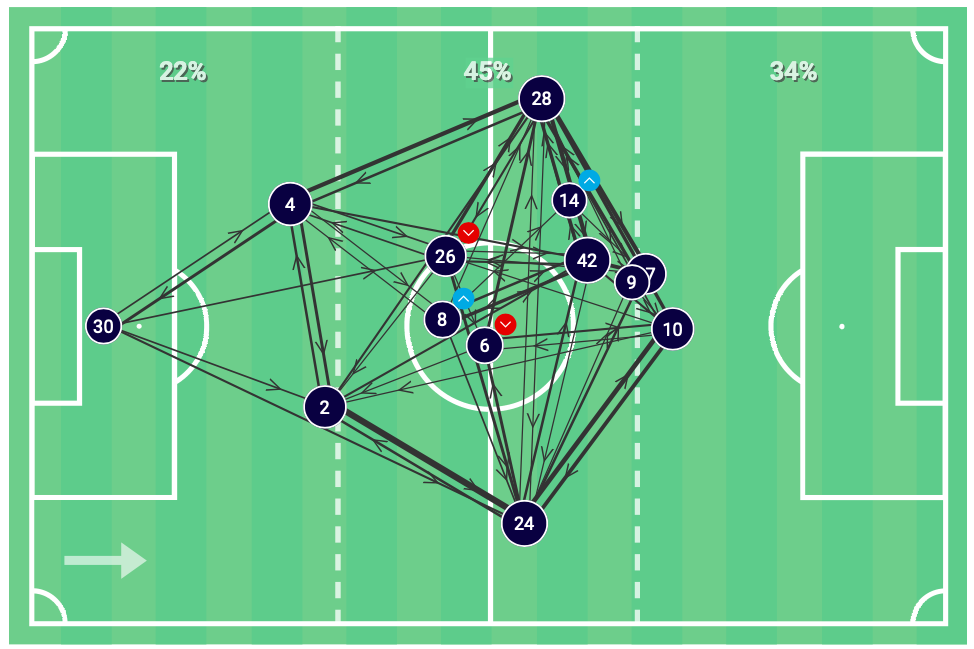 This tactic attempted to stretch Philly’s defensive line so New England could play between the lines towards their attackers. Due to the Union’s defensive block, New England was only able to shoot and cross in uncomfortable situations. Below we can see that only four crosses were successful in the first half.

Union in the halfspaces

In the attack, Philadelphia deployed a number of players in the midfield that would rotate to find pockets of space. The likes of Monteiro and Aaronson also would find themselves in the channels to assist the outside backs. Wagner and Gaddis would also make themselves available in the halfspace by exploiting the space left by Philadelphia’s stretching of the defensive line.

Looking at the following examples, we see this tactic in action. The first sequence begins after a failed New England clearance. Przybylko brings the ball down in the left channel as the Revs right back closes him down. Since Santos and Elliott are awaiting service, New England’s centre backs are pinned in the penalty area. This isolates the right-back against Przybylko. Wagner takes notice of the lane that has opened and makes a run within the halfspace. 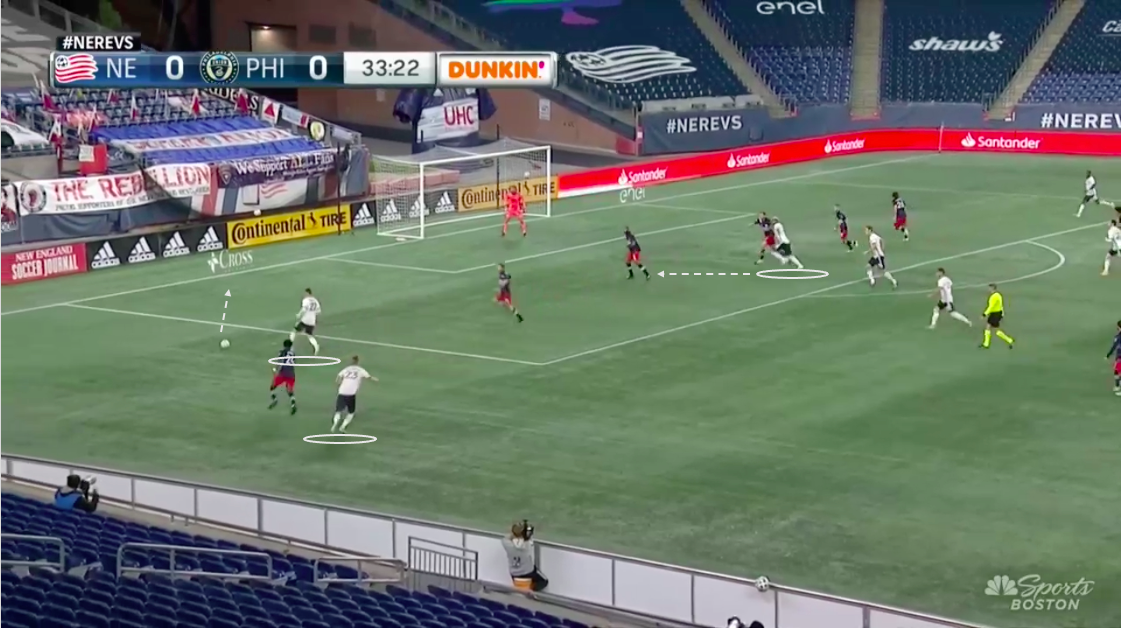 After being played into space, Wagner has the time to look up and rifle a low cross into the penalty area. While Santos isn’t close enough to reach the cross, his presence is enough to force the Revs centre back to clear the ball. 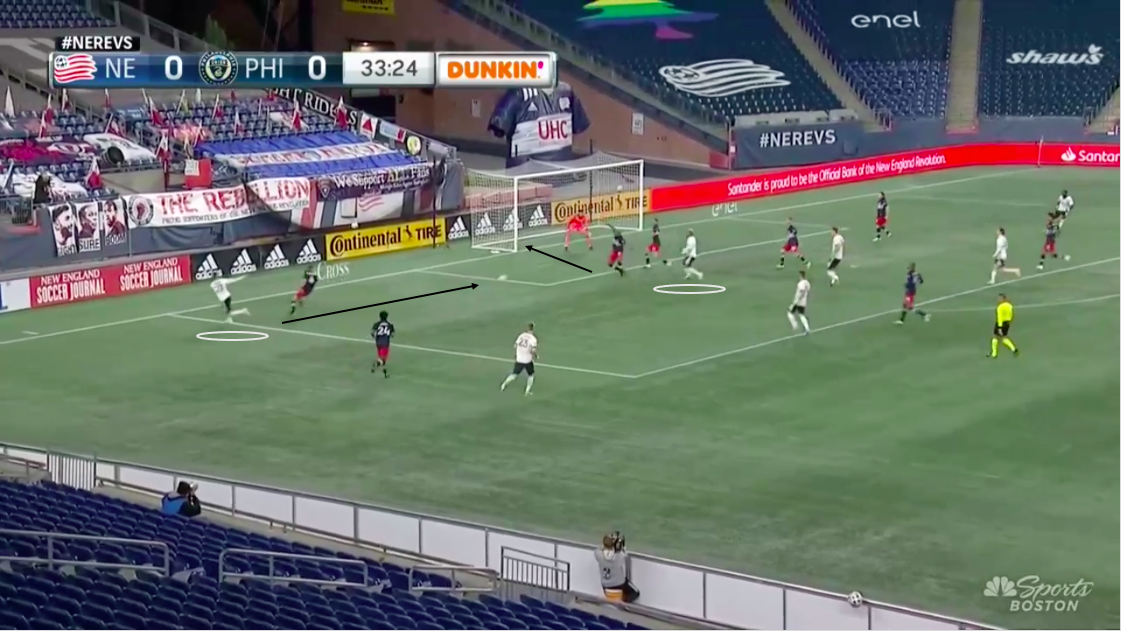 The clearance ends up in the back of the net, and the Union’s attack is rewarded. After Ilsinho’s introduction, Philadelphia adjusted to a 4-2-3-1. The next sequence begins after the ball is switched to Gaddis. We see the Brazilian providing the width, and once the right-back settles the ball he plays Ilsinho.

Again the Revs defender steps to the channel and opens up a gap for Gaddis to run through. Ilsinho is able to pass to Gaddis behind the defence, and the right back ends up forcing the keeper into a save. 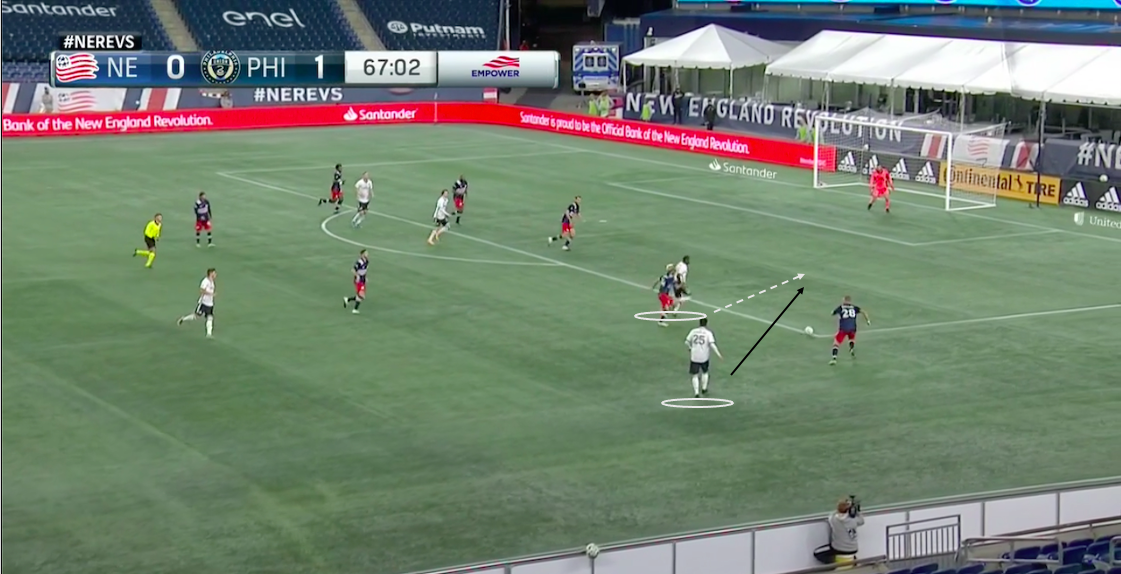 Bruce Arena elected to change up the formation to a 4-1-3-2 as they chased the game. Since New England’s right-back was able to attack more frequently, Arena added more speed to the right by having Buchanan switch flanks. 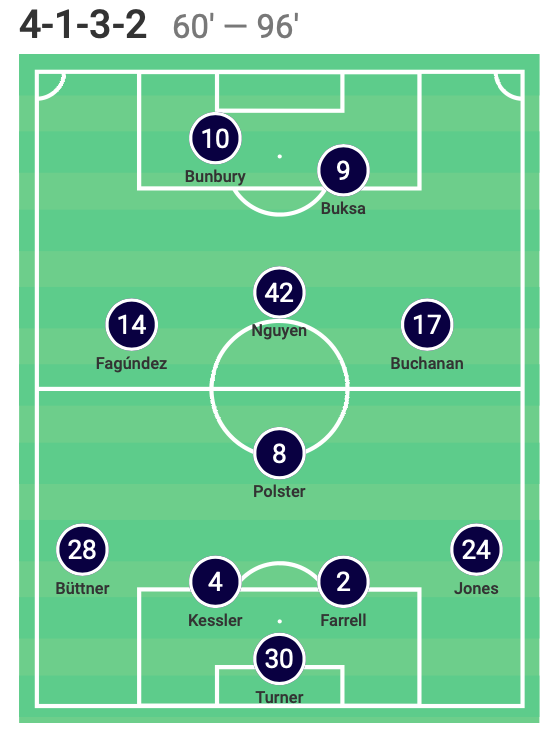 Analyzing the sequence that led up to the goal, we can see how Buchanan and Jones’ pace pushed Philly back. After receiving the ball, Buchanan begins to dribble at speed while Jones can be seen sprinting to overlap. Since they have quickly created a 2v1 on the right flank, Philadelphia’s left-back hesitates and continues to drop.

Jones’ run creates space for the right winger to continue to dribble towards the penalty area. Buchanan is able to take his time to make a decision due to this space created. He ends up firing a shot that freezes Blake and brings the Revs within one goal.

This tactical switch tested Philadelphia’s defensive resolve. We can see a noticeable difference in New England’s crosses in the second half. The Revs connected seven crosses, with five coming from the right side.

Philadelphia comfortably held the Revs for the better part of an hour. Through their defensive discipline and clinical attacks, Jim Curtin’s side were able to exert their dominance in Foxboro. While New England was able to score towards the end after their adjustment, they were not able to create more quality chances.

Both teams are a lock to compete in the postseason, with Philadelphia potentially challenging for the top spot in the league. With Homegrown standouts Aaronson and potentially Mark McKenzie departing at the end of the season, the Union will want to send them off on a high note. Although Lee Ngyuen is a capable attacking midfielder, New England clearly misses Carles Gil’s attacking output.