After the MLS had to cancel some games over the weekend, an almost full slate of matches was played on Wednesday. One of these matchups was between hosts FC Dallas and Sporting Kansas City.

FC Dallas has not had much luck playing at home. Luchi Gonzalez’s side has only won one game and drawn four before the match against Sporting KC. Sitting eight points behind the visitors, another victory against Sporting KC would aid Dallas in their hunt for a spot in the postseason.

Sporting Kansas City came into Texas on the back of a three-game win streak. Peter Vermes’ team is sitting in third place with 29 points. If they could leave North Texas with three points, Sporting KC would put themselves between Seattle and Portland in the race to top the Western Conference.

At the end of the night, Dallas was able to claim their second home win of the season. This tactical analysis will look at how the North Texas team was able to secure three points from a tough Sporting KC.

Luchi Gonzalez’s team had a game against Colorado postponed, so they had just come off a weekend off. Dallas’ 4-2-3-1 was very fluid in the midfield with academy product Tessmann and Acosta rotating frequently. Center back Bressan continues to deputise for the injured Matt Hedges. At right-back, Bryan Reynolds continues his strong form after Reggie Cannon’s departure to Boavista. 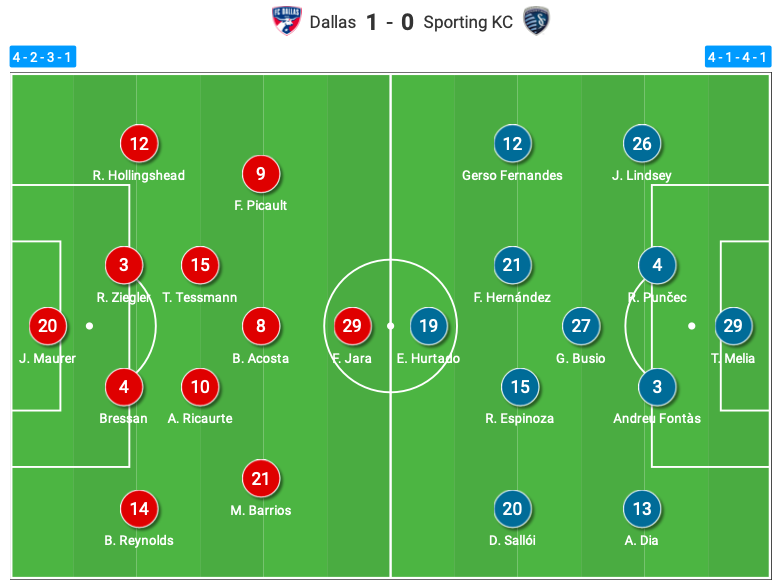 Peter Vermes set his side up to roll with the punches in Texas. With Alan Pulido missing due to international games with Mexico, Erik Hurtado was called upon once again to lead the line. Vermes also rested leading scorer Johnny Russel, opting with Gerso Fernandez on the right-wing. Due to absences to captain Matt Besler and West Ham loanee Winston Reid, Fontás and Puncec started at the heart of the defence.

A tale of two halves

This game was quite unusual in the fact that each team dominated a half, bossing the possession and pinning the opponent in their defensive third. The team on the receiving end typically sat back and protected the middle as much as possible while looking to counter-attack. 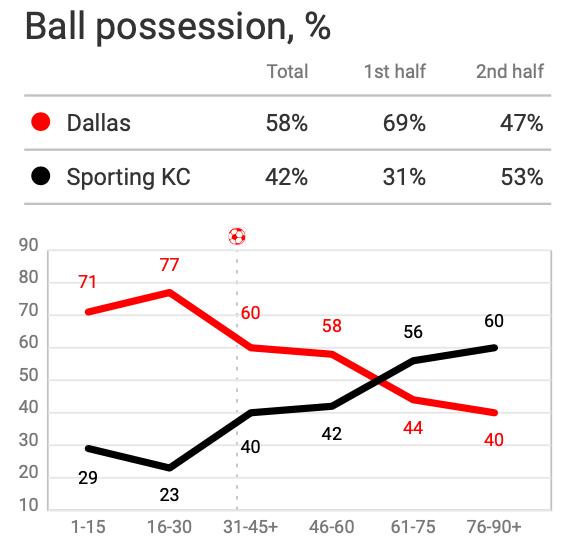 Looking at the possession above, we can see that Dallas essentially played keep away in the first half. This then dives from 69% to 47% due to their willingness to sit back and defend their lead. Sporting’s decision to chase the game is also seen in their possession shift.

The story of the two halves can also be seen in the pressing intensity and attacks per minute. Luchi Gonzalez came out flying out of the gates as they did in their game against Houston, only allowing an average eight passes per defensive action in the first half. They also were able to average 0.6 attacks per minute, effectively pinning the visitors in the defensive third.

Sporting Kansas City was able to almost double their attacks per minute, going from an average of 0.3 to 0.59 in the second half. Their PPDA increased by a small amount, but their defensive tactic was different than Dallas.

In the following section of the analysis, we will take a detailed look at Dallas in the attacking phase of the game.

Dallas’ focus on the channels

The North Texas side’s attacking tactics relied heavily on numerical superiority in the channels and half-spaces. In a way that is similar to Liverpool, Dallas looked to attack with wingers Barrios and Picault, while outside backs Hollingshead and Reynolds pushed high up the field to cross the ball. 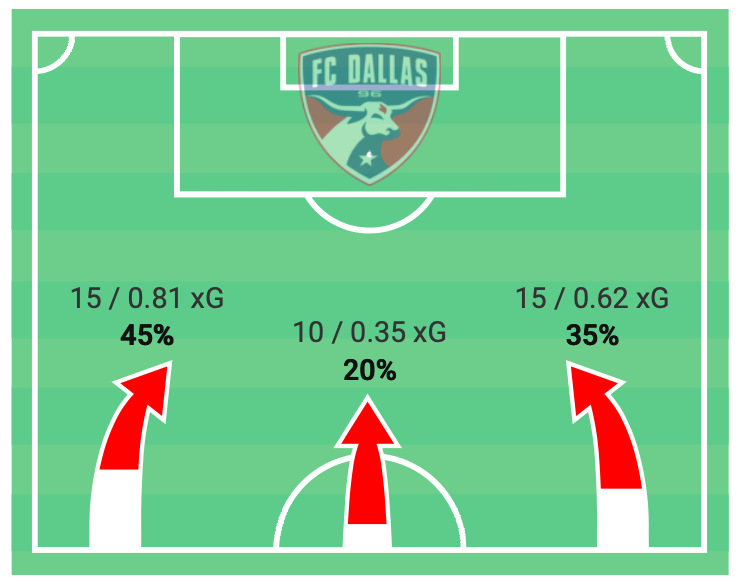 Their emphasis on wide play can be seen above. Each flank had 15 attacks, while the centre of the field only saw 10. Their first-half dominance also saw Dallas connect ten crosses, with one of those creating their goal. 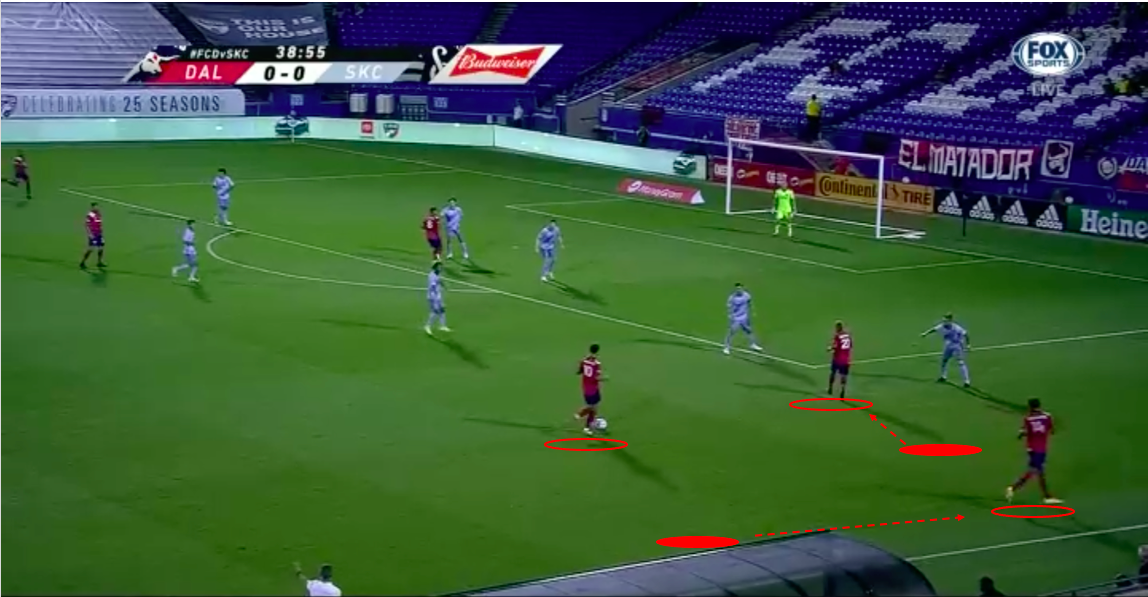 Analysing this sequence from the first half, we can see the wide play being executed. As Picault dribbles forward, Reynolds moves into the flank while Barrios drifts into the halfspace. Barrios’ movement draws the Kansas City defenders towards him, which opens up space for Reynolds in the channel. 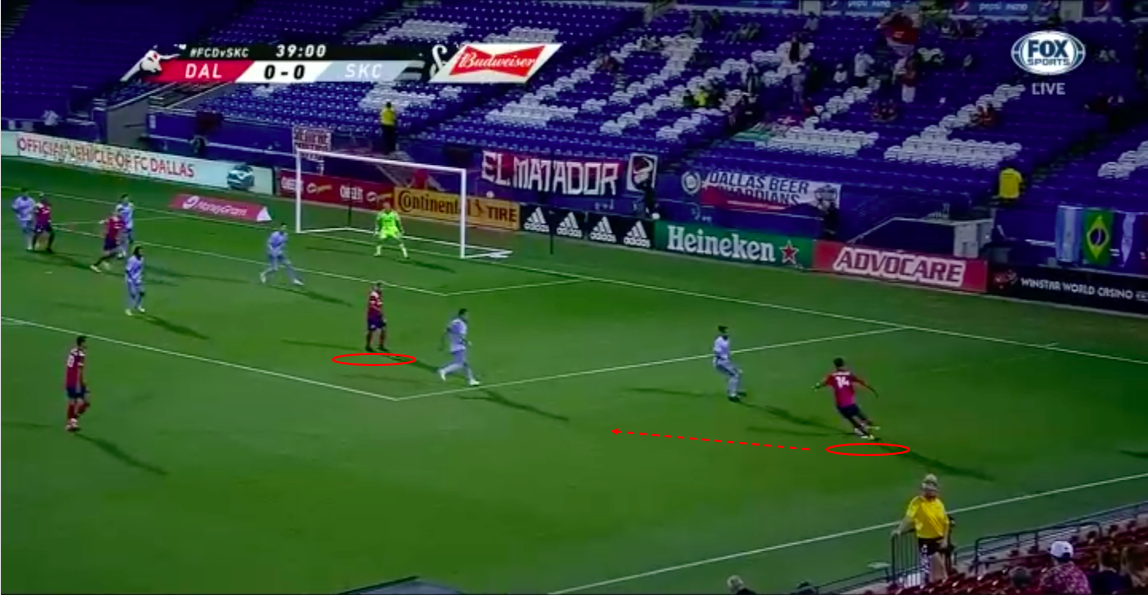 After he receives the ball, Reynolds then dribbles towards the penalty area while Barrios positions himself in the defender’s blindspot. 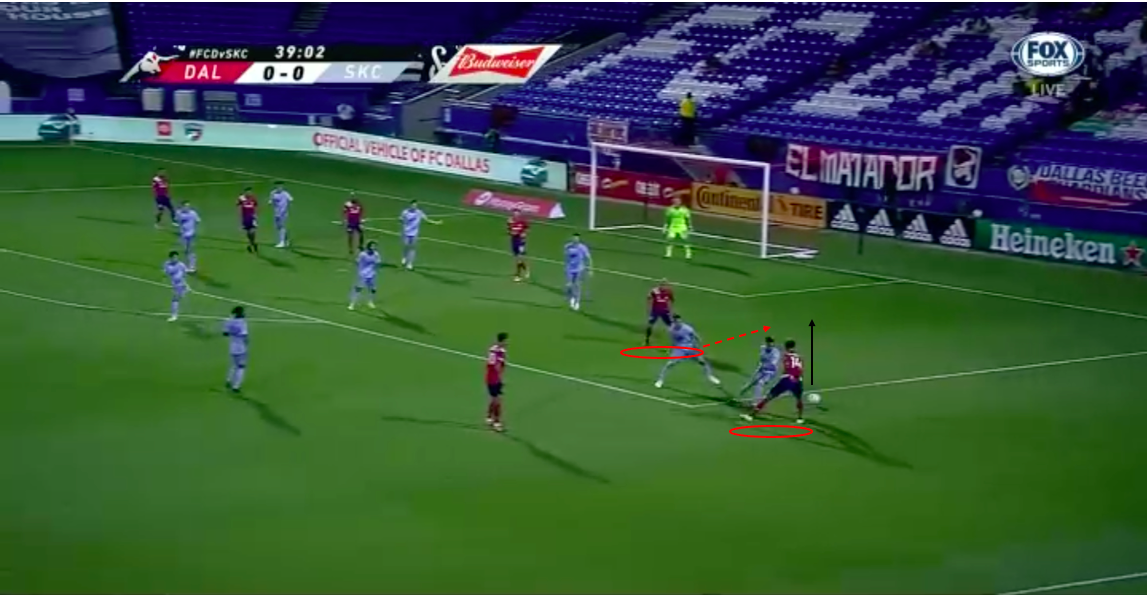 Once Reynolds slows the ball down, the defenders then begin to converge on him forgetting about Barrios. The Dallas right back recognises this and plays a clever pass to Barrios towards into the space behind the defenders. 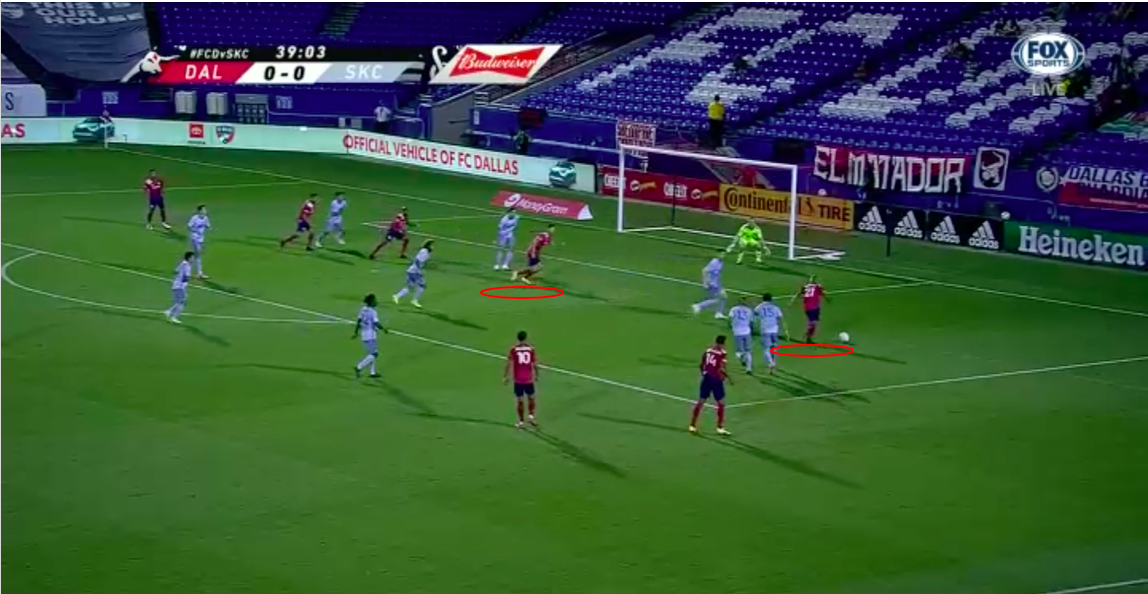 The Colombian winger is then in a dangerous position to put a ball across the six-yard box. Although the attempted cross is blocked, the chaos that Reynolds and Barrios caused on the right ended up in a goal a few minutes later.

Instead of pressing and forcing mistakes, Sporting KC looked to restrict the space in the middle and force Dallas into high risk passes into the middle. They did this by setting up in a 4-5-1. 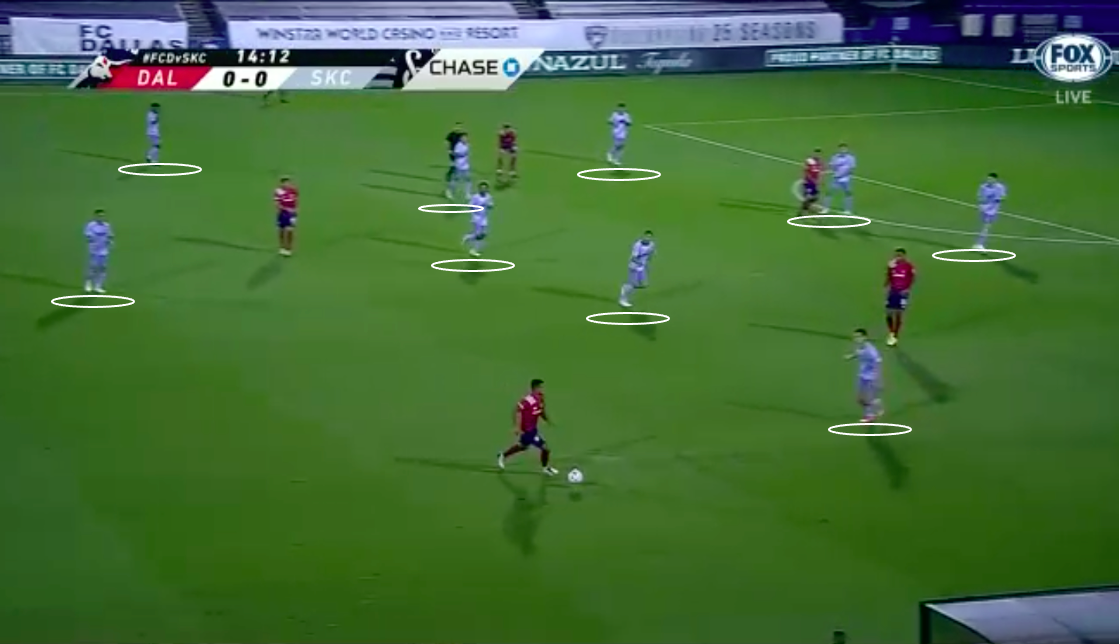 As we can see above, Espinoza and Hernandez dropped in next to Busio to create a flat line of three. The wingers would drop in to help the full-backs in the channels. This defensive tactic attempted to allow Dallas to play wide and clog the halfspace and channels. 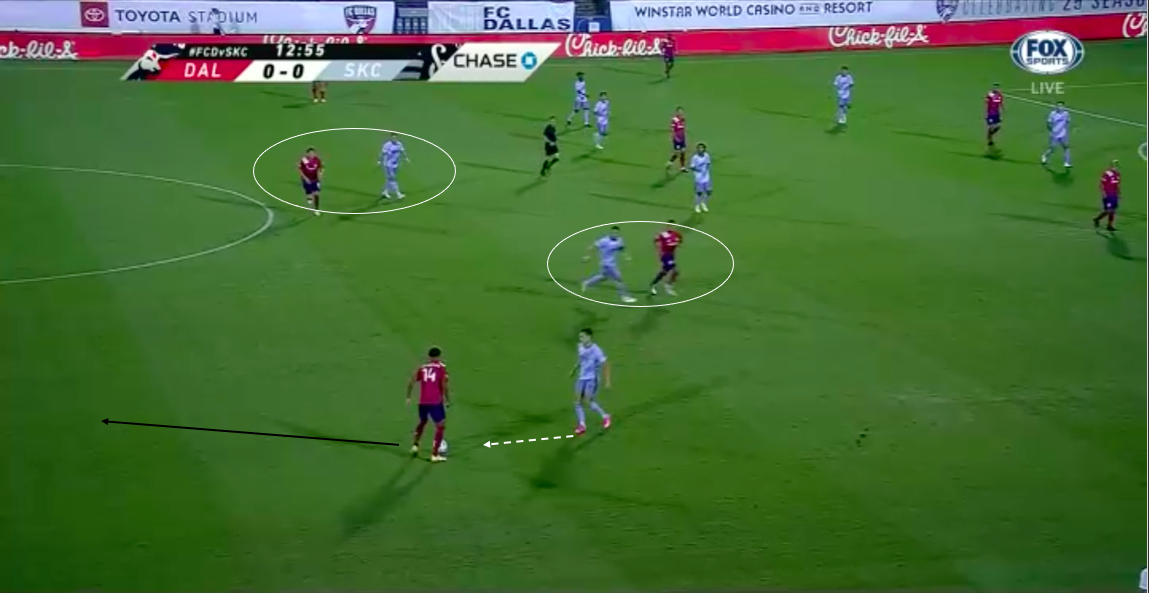 If Sporting were able to slow Dallas down, they would be able to force the hosts backwards with a combination of cutting passing options and pressing. We can see an example of this above. Reynold’s central passing options are tightly marked, and due to defensive pressure, his only pass is back to a centre back. This would force the home side into a forced pass that went out of bounds, or with Sporting receiving the misplaced pass.

After half time, Vermes’ substitutions showed Sporting’s intent on equalising and potentially winning the match. While they did spread the field using their wingers and outside backs, their focus was to play dangerous balls in the middle. Using the analysis of their attacking preference, we can see that although Sporting had more attacks down the left, they were at their most dangerous through the middle. 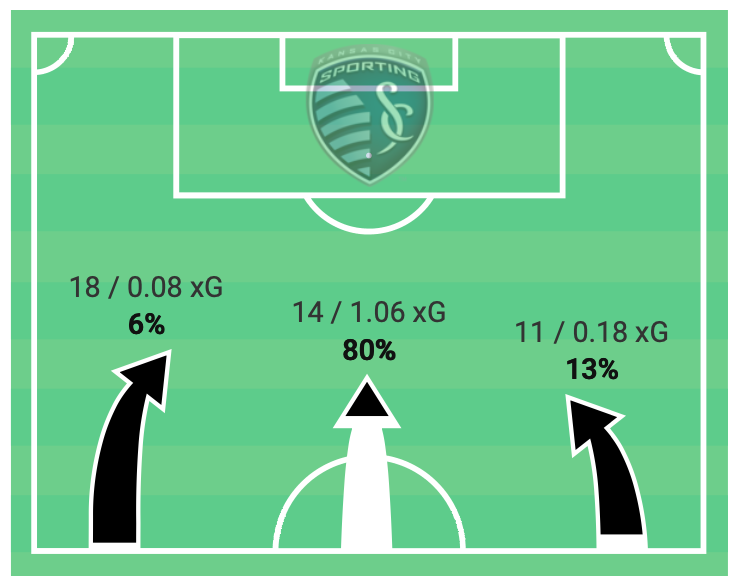 We can see an example of this attacking tactic with this example from the second half. After receiving a diagonal pass behind the Dallas midfield line from Sánchez, Luís Martins takes the ball down the channel. 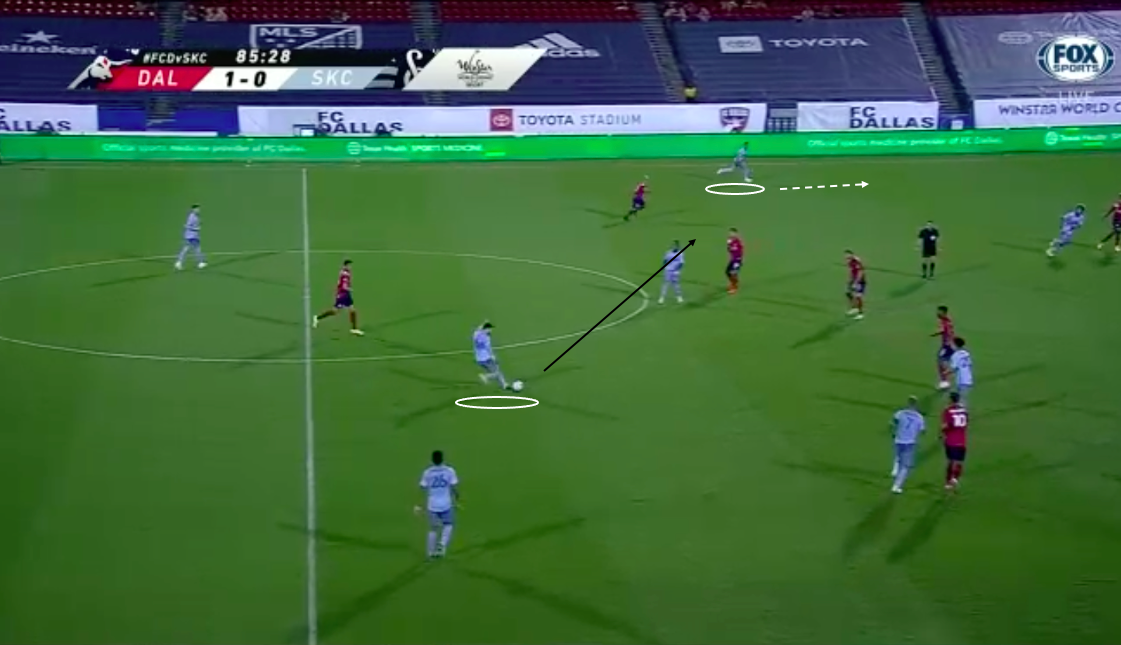 Since he has space to take, he dribbles towards the halfspace. While this is happening, his teammates are beginning to make runs from deep positions in the midfield. Notice that Duke is making a run towards the gap between the centre-backs. 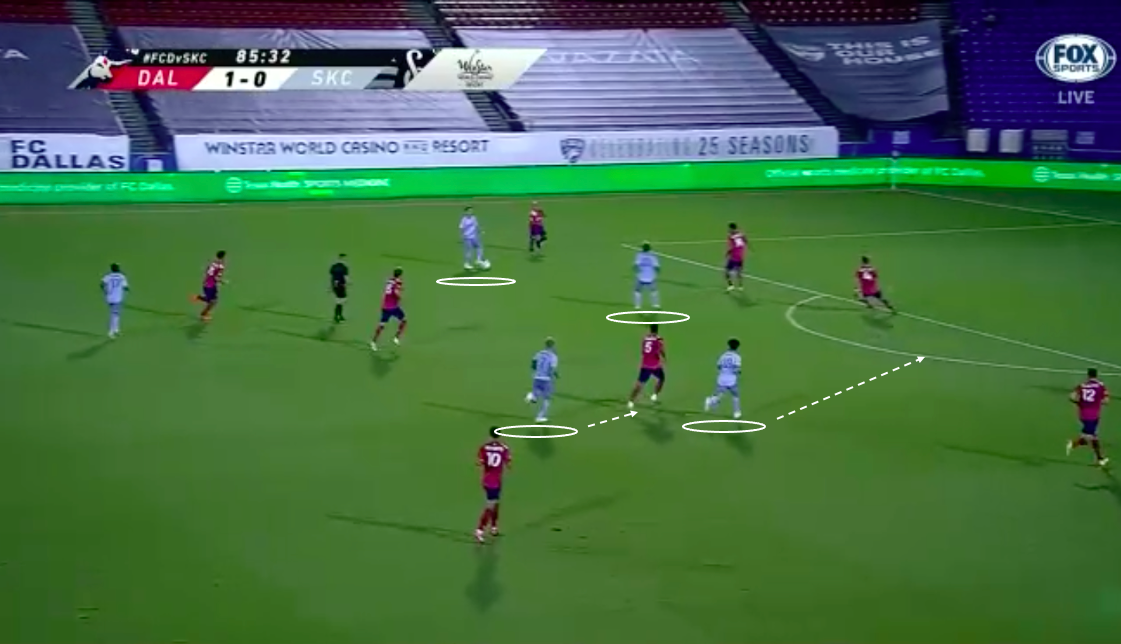 As Dallas recovers and closes down the space between their lines, Martins is able to pick out Duke as he continues his run. The right backs pass cuts out six Dallas defenders on its way to his teammate. 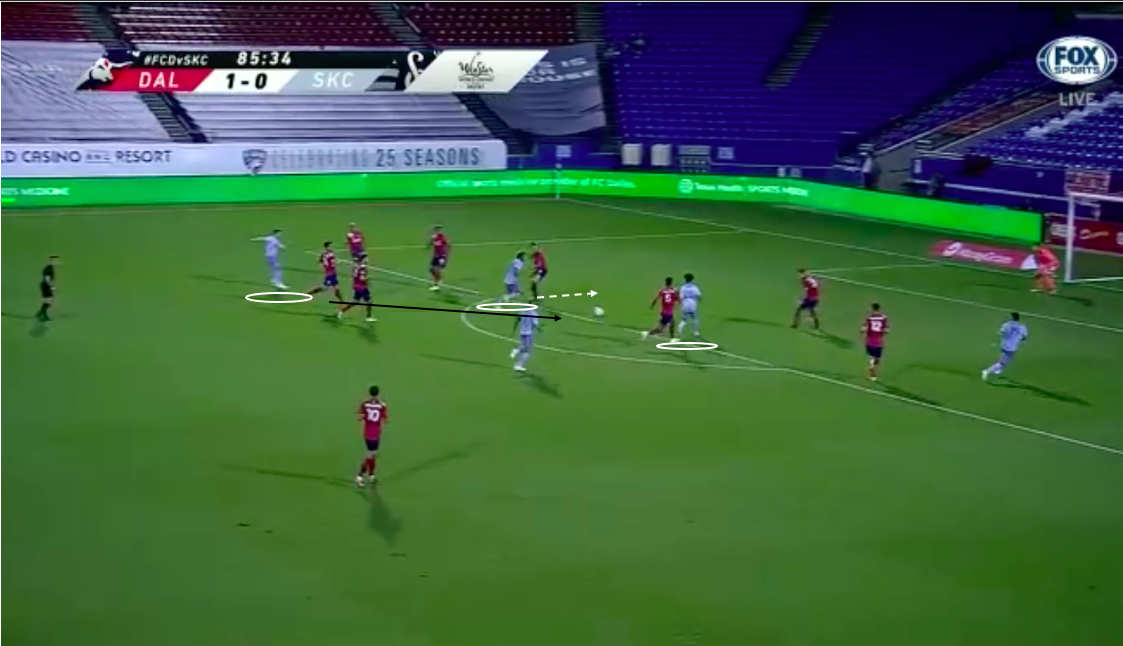 Using Martins’ pass as a trigger for his movement off the ball, Busio makes a run to potentially receive a third man pass from Duke. The midfielders end up combining in the penalty area. Duke cleverly lays off the ball for Busio, who has his shot blocked. 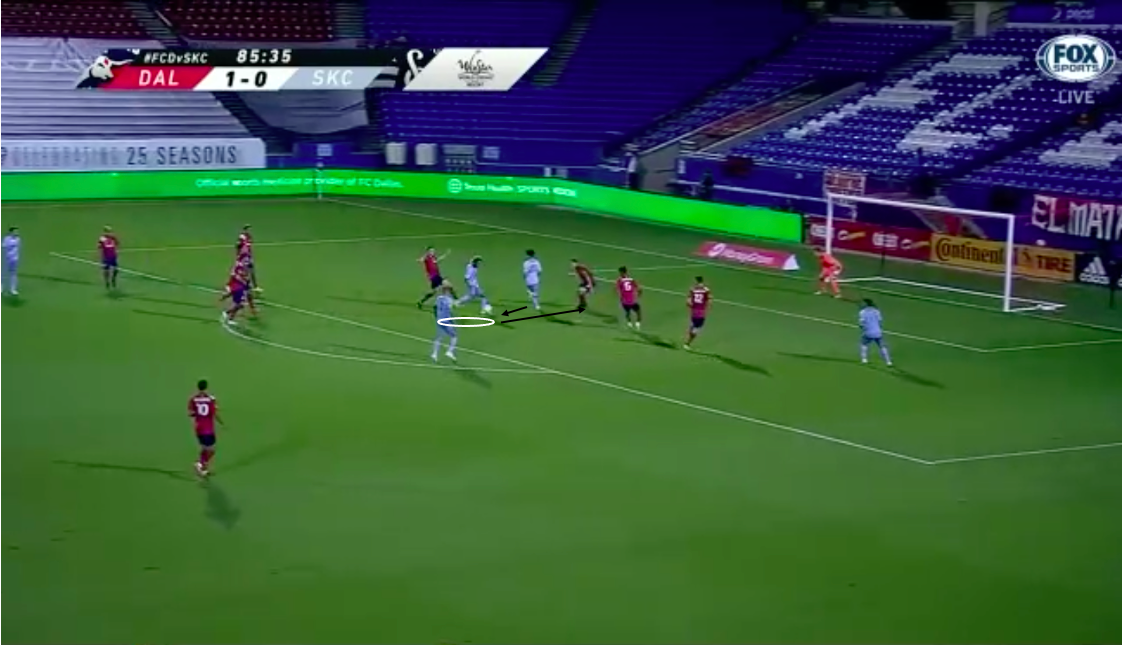 The roles of this match were reversed in a very interesting manner. While Dallas was able to capitalise on their dominant first-half display, Sporting KC could not find a way through when they took charge in the second half. Luchi Gonzalez and his team now find themselves in fifth place, right in the middle of the playoff spots. Vermes and Sporting still sit in third place, but the race for the top has now gotten a little tighter.

With Colorado not being able to play multiple games, the league standings will be potentially settled by points per game. This means that the remaining games will be battles for the teams looking to make the postseason. Sporting KC and FC Dallas will look to continue to do themselves favours in their remaining fixtures.