After winning only one game in their last 10, Toronto FC travelled to LA Galaxy in search of redemption. LA Galaxy sit in second place of the MLS Western Conference behind local rivals LAFC. Everything pointed towards an LA Galaxy win, and the game predictably ended two goals to nil for the home team.

Despite the predictable scoreline, Toronto FC held Guillermo Barros Schelotto’s men off until the 75th minute. Find out exactly what went wrong for Toronto FC during this MLS match, and why it took so long for LA Galaxy to break the deadlock in this tactical analysis.

While the following image indicates that both LA Galaxy (left) and Toronto FC (right) lined up in the same formation, the positioning of players changed mid game. Zlatan Ibrahimović remained the furthest man forward for LA, while Alejandro Pozuelo dropped deeper to act as a playmaker. One notable inclusion in the Toronto FC lineup was Liam Fraser over Michael Bradley who is currently playing in the Gold Cup with the USA. Striker Jozy Altidore was also unavailable for Greg Vanney. 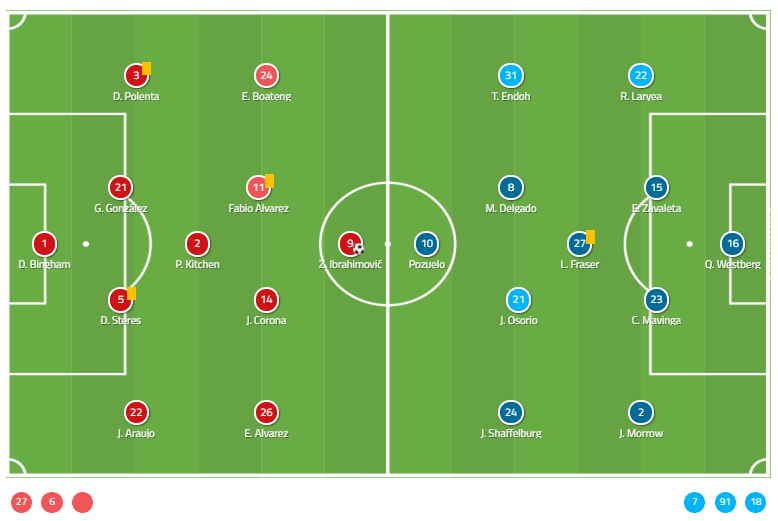 After the departure of Toronto FC club legend Sebastian Giovinco, Alejandro Pozuelo was brought in to try and fill the void of the missing franchise player. But the Spaniard’s style of play and incredible passing range makes him a more like for like replacement of Víctor Vázquez who also left Toronto last winter.

Pozuelo can score goals, as he proved on his Toronto FC debut, but he can’t score the goals and set them up at the same time. With star forward Jozy Altidore away on international duty, added pressure has been put on Pozuelo to score and assist. The absence of Altidore was evident in this game, as Pozuelo’s brilliant playmaking resulted in little to no chances for Toronto FC.

As we can see from the heatmap above, Pozuelo occupied a much deeper role than the starting lineup suggested. On many occasions, he would drop to find the ball, while Jonathan Osorio and Marky Delgado sat more advanced.

In the image above we can see Pozuelo trying to find space between the lines. This is where Pozuelo’s passing rage can cause problems for his opposition. Finding space in these positions resulted in him completing the most passes on the night, attempting 95 in total. Of these, 54 were forward passes in the final or mid third.

In the following images, we can see how effective Pozuelo can be at setting up goal scoring chances. The first example shows Pozuelo playing a brilliant through ball to Marky Delgado. The second is a great lobbed pass for Jonathan Osorio to run onto.

In both these examples, the passes manage to break LA Galaxy’s defensive lines. Unfortunately for Toronto FC, the final ball from Delgado and Osorio were unsuccessful. Pozuelo’s deep position meant that he was preoccupied creating chances, and unavailable to be a goalscoring threat in the box.

Alejandro Pozuelo is Toronto FC’s top goalscorer this year with seven goals, and their top assister with eight. Their second top scorer is Jozy Altidore, who has scored five goals in considerably fewer games. These statistics suggest that without Jozy Altidore, Toronto FC don’t have another natural goalscorer at the club. Well, none good enough to start each week that is. Sorry, Jordan Hamilton.

It is clear that Alejandro Pozuelo is more than capable of providing goalscoring opportunities for his teammates. Unfortunately for Greg Vanney and his team, Pozuelo can’t score and assist every game. Despite having 59% possession, Toronto FC’s lack of a goalscorer was the main reason they didn’t score in this match.

One bright light for Toronto FC this game was Liam Fraser. The young Canadian has had a chance to prove himself to Greg Vanney over the last few weeks with Michael Bradley reporting for international duty. In this match, he did brilliantly both defensively and offensively, marking Zlatan Ibrahimović and dictating the direction of Toronto FC’s attack.

Aside from Pozuelo, Liam Fraser attempted the most passes in this match with 84. Only seven of these passes were unsuccessful. You can see this in the pass map below.

Fraser acted as a pivot, possessing the ball very deep and dictating the point of Toronto’s attack after sustained periods of possession. He dropped deep to receive the ball from Toronto FC’s centre-backs while full-backs Laryea and Morrow played more advanced.

Fraser would then look to start Toronto’s attack by finding a midfielder in space or, more frequently, hitting the feet of an advanced full-back. LA Galaxy’s compact defensive shape meant there was plenty of space out wide for the likes of Morrow and Laryea.

In the image below, we can see Fraser play the ball into Jonathan Osorio, who turns to dribble into the free space. He passes the ball into Pozuelo but the pass is cut out by LA and the ball is cleared back to Fraser. Fraser sees the open space to the right of the field and hits the feet of right-back Richie Laryea on his first touch.

A few minutes later a similar scenario happens where Toronto subject themselves to an underload scenario on the left side of the field. By giving LA Galaxy numerical superiority, they created isolation on the right side with Laryea. Fraser’s deep positioning allows him to receive the ball and quickly change the point of attack.

Fans of Michael Bradley will be happy to see Liam Fraser emerging onto the scene. His role in this game showcases his ability to step into Bradley’s place whenever he chooses to move on. Unfortunately, despite creating isolation for their full-backs, Toronto FC were unable to capitalise on their possession out wide with threatening delivery into the box.

LA change the point of attack

It took 75 minutes for LA Galaxy to eventually break the deadlock. Part of Toronto FC’s defensive success up until this point came from Liam Fraser. Toronto did well to defend deep with two defensive lines. Liam Fraser would sit between these lines and prevent any passes into the free space.

In the image above we can see Ibrahimović sitting between Toronto’s defensive and midfield lines. Liam Fraser is also occupying this space. As the pass comes in, Liam Fraser steps to Ibrahimović, preventing him from turning towards the goal. We can see this pressure applied by Fraser in the image below. Ibrahimović is forced to play the ball back into the midfield.

Generally, Fraser did well to prevent any central penetration from LA Galaxy. The Galaxy’s best chance in the first half came from a wide area. Boateng played a brilliant ball to Efrain Álvarez back post who fired the ball off the post.

Later in the game, LA Galaxy started changing the point of their attack by playing penetrating passes from wider areas. LA Galaxy crossed the ball 18 times during the match, 13 after the 60-minute mark.

Once LA started playing in crosses, they managed to utilise Ibrahimović much more effectively. He had three shots throughout the game, all coming after the 60th minute. Two of these shots resulted in goals and all three came after the ball was delivered from wide areas.

The following image shows Ibrahimović taking up a position at the back post. We can see Ibrahimović sitting between two Toronto FC defenders. When the cross came in, Zlatan was able to control the ball with his chest and have a free volley from about nine yards out. Luckily for Toronto FC, the shot sailed over the crossbar.

Just fourteen minutes later Ibrahimović scored from an almost identical delivery. By changing the point of attack, LA Galaxy were able to utilize Ibrahimović’s physical dominance and win the game.

After using analysis to look at the tactics we saw that despite keeping LA Galaxy at bay for 75 minutes, Toronto FC couldn’t cope with the crosses into Zlatan Ibrahimović. Alejandro Pozuelo created a few good opportunities for Greg Vanney’s side, but the lack of a natural finisher in the available squad prevented any threats to David Bingham’s goal.

Guillermo Barros Schelotto and his LA Galaxy host San Jose this week. Considering their positions in the table, we can expect Galaxy to pick up three points here. Toronto FC take a rare trip north as they face the Montreal Impact. Montreal sit fourth in the Eastern Conference, but anything can happen in a derby match. Montreal should be favourites on form though.