Atlanta United vs New York Red Bulls always promises to be an enthralling tie and this Sunday at the Mercedes Benz Stadium was no different. Both sides fought hard and, amidst a lot of drama and late action, settled for a 3-3 draw. The result capped yet another occasion where Atlanta failed to get the better of New York – who have been a tough nut to crack for the reigning MLS Cup champions. In this tactical analysis, we’ll explain the tactics employed by both teams and why the draw for Atlanta actually felt like a loss. 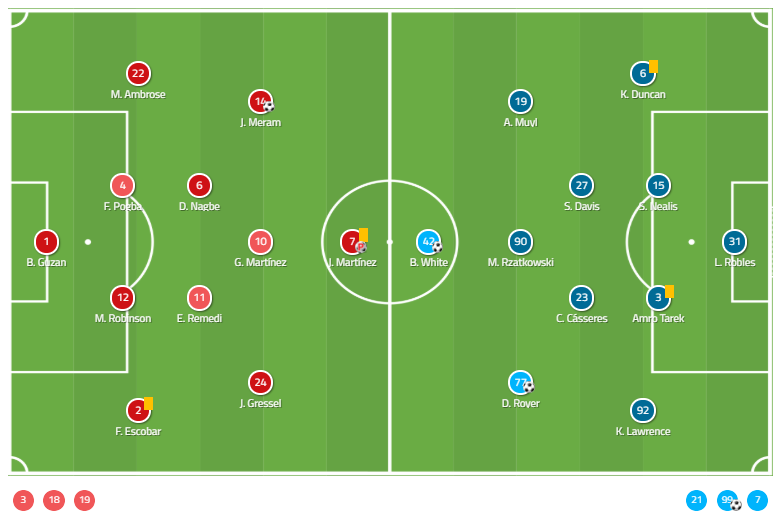 Atlanta lined up in a 4-3-3 on paper but, in reality, were more of a 4-2-3-1 in possession. The difference was that Gonzalo Martinez moved up into the #10 position instead of playing in the midfield three.

Atlanta spread out into an expansive possession-style system whenever they had the ball. They attempted to control the match and dominate their opposition in terms of possession. Majority of their goal-kicks were short.  During goal-kick situations, the centre-backs would split up and position themselves at the corners of the 18-yard box. The full-backs would move higher up and open up angles for aerial balls. They didn’t move very high – instead staying within their own halves. Darlington Nagbe would act as the single-pivot most of the times but if the pressure was too high, the other midfielder – Eric Remedi would join him and act as another passing option. For most parts, however, he stayed a few yards higher up so that he could provide a staggered passing option.

Above them, the forwards set up in the usual manner of a front three. The wingers were freer in their movements and the striker would attack the space behind the two Red Bulls centre-backs. The attacking midfielder would stay centrally and hunt spaces in between lines.

During the second phase of build-up, that is, when Atlanta’s centre-backs had the ball and the midfielders were inside the opposition half, the full-backs played a different role. They moved much higher up and allowed the wingers to drift inside. This packed the centre and created a diamond. This was essential because the Red Bulls were defending very compactly. Hence, to neutralise the numerical superiority in the centre, Atlanta moved their own wide players in the half-spaces.

The full-backs acted as wide outlets and held their positions – only making runs in behind when they were being supported by their wingers.

In this phase, Atlanta moved the ball quickly and with intent. They took a while to find their footing in the match but once they did, they played their brand of quick vertical wall-passes which allowed them to play balls directly in the paths of the third man making a run. These dynamic movements did much to unlock the Red Bulls’s packed midfield. It also allowed Atlanta to switch the point of attack without playing a lot of long balls.

For all their possession play, Atlanta United still hadn’t scored from any of the chances they were creating. Part of this was due to miscommunication in the final third and due to the fact that the Red Bulls defended their own box well. Due to this, counter-attacks also proved to be a solid attacking plan for Frank de Boer. The Red Bulls were pushing men forward in their usual heavy pressing style and this opened up spaces in between lines. To exploit this, he tried to punish the extra spaces by instructing Gonzalo Martinez to position himself in-between the midfield and defensive lines and then hit them using his pace and ball-carrying ability. This is indeed what resulted in the first goal.

Although Atlanta didn’t cross much, they did have a strategy in place for it. Usually, it would be the full-back who’s be crossing and he’s work closely with his winger to create the space necessary to whip in a cross. The deliveries themselves would mostly be aimed for the space just outside of the six-yard box. The striker – Martinez, the attacking midfielder – Martinez and the far-sided winger would attack the box in an attempt to get on the end of any such cross. It was indeed a cross which led to the third goal for United.

However, for most parts, they preferred to keep the ball on the ground and create chances centrally or shooting from the area just outside the box – the zone 14.

The use of central corridors and asymmetrical wing dynamics

Atlanta used the flanks more heavily during build-up than when they were in the final third. This means that when they were in their own third, they tried to progress the ball down the flanks, using vertical passes from the centre-backs (who stayed wide) to either the full-back or lofted balls to the winger. However, once they were able to beat New York’s press, they played passes sideways into the central corridors to the #10 or the deeper midfielders so that passes to either flank could be made more easily.

Atlanta employed slightly different tactics on both the flanks. The difference was in regards to the dynamics between the full-back and the winger. On the left flank, the winger – Meram was drifting inside more often. This created space for the full-back – Ambrose to overlap. On the other flank, however, the right-winger – Gressel – would stay wide more often than not. This allowed Escobar, the full-back, to invert infield. Often times they’d interchange their positions as well and this led to a lot of trouble for the Red Bulls left-back, Lawrence.

Pressing high up the pitch is an integral part of the Red Bulls’ game plan and they did so against Atlanta. Their pressing depended a lot on Atlanta’s structure but they had a few clear-cut pressing triggers – any back-passes to the centre-backs when they were too close to the forwards was pressed and so was any bad touch by the centre-backs.

Their pressing structure differed from their nominal line-up in a few significant ways. Royer played as the widest midfielder on the left side and was the most crucial part of their pressing. Red Bulls pressed in a 4-5-1 which morphed into a 4-4-2 or a 4-3-3.

When Atlanta were in the first phase of building up and had their centre-backs split up, Royer pressed the right centre-back and the right-back. The forward – White moved out to do the same on the other side – press the left centre-back and cover-shadow the lane into the left-back. Rzatkowski played as the nominal striker. He marked Nagbe who offered a central option. Their pressing yielded results – the first goal was an indirect consequence of Royer pressing the goalkeeper.

When Red Bulls were not pressing high up the pitch or when Atlanta were in a set phase of possession, they fell into an ultra-compact central block. The five midfielders would all move inwards and force passes outside. This was something Atlanta could’ve taken advantage of – if they’d have switched the ball more but the intense hounding of the central midfielders ensured that they never had time to pick out a pass and had to pass the ball backwards. When they did break the press, Atlanta thrived in the wider spaces.

Pressing with the full-back

As Atlanta were beginning to find more and more spaces in the wider areas, New York decided to tweak their pressing scheme a little. Instead of sitting in a compact shape, they tried to press the stop the wide vertical passes of the Atlanta full-backs. To do so, they pressed higher up the pitch with their own full-backs. This meant that even when the Atlanta were in their own half, the full-backs, Duncan and Lawrence would sprint forty yards to press them and ensure that the full-backs couldn’t turn. To cover the spaces, the midfielders would tuck inside and cover the central passing lanes. This ended up creating high-quality chances for the Red Bulls and almost led to a goal.

Do Atlanta have a problem defending low crosses?

Both of the second and third goals scored by the Red Bulls were due to some shoddy defensive performance in their own box. Both of the goals came from shots off low whipped in crosses from the right half-space and they were both finished by unmarked players on the far post. The fact that both goals were very similar in nature begs the question if Atlanta have an Achilles’ Heel which they should know about and more importantly, other teams should know about.

Although Atlanta were the better of the two teams on this occasion, upon analysis the margin was very small. New York played out their plan to perfection while the same could also be said for Atlanta if they’d not conceded goals in clutch situations. Atlanta could also have used the flanks better had they switched the ball more since often at times the free player was on the far side but he was not seen by his teammates. New York also need to focus on ensuring better defensive transitions as they’re conceding a healthy amount of goals from counter-attacking situations.