In this MLS midweek matchup, defending champions Atlanta United hosted Toronto FC. As the last two teams to win the competition, this should have been a much closer game. Despite having a rocky start to the campaign, Atlanta United have regained form, making a charge up the table. Before the match Toronto FC had the best points per game ratio in the MLS, breathing down the necks of the conference leaders with a few games in hand. But the game finished 2-0 for Atlanta United, who closed the gap on Toronto FC in the league. This tactical analysis will look at exactly how the game was won. 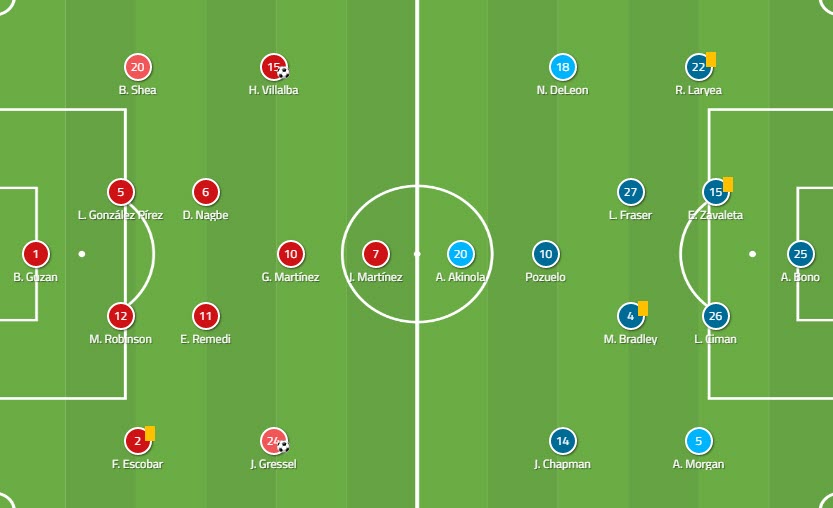 Greg Vanney, on the other hand, made a whopping six personnel changes after beating Orlando. He too set up his team in a 4-2-3-1 formation, with Jordan Hamilton, Jonathan Osorio, Marky Delgado, Justin Morrow, Chris Mavinga and Auro dropping out of the lineup. All but Hamilton made the bench as Ashtone Morgan, Eriq Zavaleta, Richie Laryea, Liam Frasier, Jay Chapman and Ayo Akinola started in their place. This is the first game that Jonathan Osorio and Justin Morrow haven’t started in the 2019 MLS season.

Despite being on the backfoot for most of the game, Toronto FC nearly opened the scoring within the first 10 minutes. Chances from both an Ayo Akinola breakaway and Nick DeLeon cross tested Atlanta United’s defenders.

Atlanta soon took control of the game and opened the scoring in the 17th minute. Alex Bono did well to save Gonzalo Martínez’s freekick, but the loose ball found Josef Martínez who set up Héctor Villalba for the tap in.

Atlanta finished off the game in the 67th minute when Julian Gressel beat Alex Bono at his near post. Atlanta had two more goals called back for offside in the second half. The game finished 2-0 as Toronto FC suffered their first-ever MLS loss to Atlanta United.

Throughout the match, Atlanta United looked most likely to score. As well as finding space to pass between the lines, they created numerous goalscoring opportunities with penetrating passes between Toronto FC’s defensive lines. In fact, Atlanta had two goals disallowed from penetrating passes with Josip Martínez being just slightly offside on both.

Toronto FC’s flat back line was easily penetrable on the counter-attack and while in possession of the ball between Toronto’s midfield and defenders. Toronto’s full-backs often looked susceptible to attacks in and behind them. Let’s take a look at a few examples of this throughout the match.

Atlanta United’s ability to find space between Toronto FC’s defensive lines was a constant problem for the Canadian team. In the following scenario, Atlanta United create a goal scoring opportunity. Both Gressel and Josip Martínez occupy the free space as Gonzalo Martínez dribbles in the midfield.

Gressel makes a run into the free space, opening up a passing lane for Josip Martínez to receive the ball. The amount of space Josip Martínez has allows him to turn and have a shot at the net from just outside the 18-yard box.

As well as taking up space between Toronto’s defensive lines, Atlanta made penetrating passes into the wide channels. Many of Atlanta’s best chances came from releasing players into the wide areas.

In the following scenario, full-back Franco Escobar passes the ball back to his central defender, Miles Robinson. After making the pass, Escobar explodes into the wide channel. With Atlanta’s right midfielder, Julian Gressel, taking up a narrow position, Toronto’s defensive lines are spread wide. This allowed Atlanta’s deep-lying players to make long passes into deep areas.

In the 51st and 53rd minute, Greg Vanney brought on Justin Morrow and Jonathan Osorio for Ashtone Morgan and Nick DeLeon. Morrow was a straight like-for-like replacement of Morgan, while Osorio came on to the left side, pushing Jay Chapman over to the right.

As the second half progressed, Osorio and Morrow helped improve Toronto FC’s build-up play by providing valuable options on the left side of the field. While they couldn’t help Toronto score a goal, it was obvious to see why the duo had started every match up until this game.

But why was their impact bigger than Morgan and Champan’s? The following heatmaps show the areas of the field both Ashtone Morgan and Justin Morrow were most involved. Ashtone Morgan, while present high up the field, had a much higher influence on the game defensively. He was much more reserved going forward than Justin Morrow. Morrow’s heat map tells a much different story than Morgan’s. His influence on the game was much more offensive, pushing up the field to connect with Osorio and Pozuelo.

The Jonathan Osorio and Justin Morrow connection did result in a few opportunities for Morrow to put dangerous balls into the box. Unfortunately, the lack of presence in the Atlanta penalty area meant no goal came. Even after subbing off a 5’8″ Ayo Akinola for a 6’1″ Terrence Boyd in the 61st minute, Toronto FC couldn’t find their target man. Akinola and Boyd only managed to make a combined 37 touches throughout the game. For context, Toronto FC made a total of 743 touches in the match.

This win means Atlanta have gone three games without conceding a goal. Wins against Colorado Rapid, Sporting KC and now Toronto FC is exactly the kind of run Frank de Boer needs for his team to push up the standings.

This weekend Toronto FC face off against conference leaders Philidelphia Union. This match will test Greg Vanney’s team. After such a disappointing performance against the defending champions, the Reds will need to change something if they want to take points away from this game.