With Philidelphia Union and LAFC toping their respective conferences, both DC United and LA Galaxy were in search of three points heading into their weekend games. While LAFC’s claiming of the Supporters’ Shield looks inevitable, there is still much to play for in the MLS Eastern Conference.

The game, despite being dominated by LA Galaxy, ended in a 2-1 win for DC United. These vital points helped DC climb back into third in the East after both New York teams lost their respective games. LA Galaxy will kick themselves for not being clinical in this game, as three points would have seen them return to second place behind their hometown rivals. Find out exactly how this exciting matchup played out in this MLS tactical analysis.

LA Galaxy lined up in a predictable 4-2-3-1 with Zlatan Ibrahimović returning to the side after missing the side’s last game against Atlanta United. Diego Polenta, who also missed the loss to the defending champions through suspension, returned to the starting lineup.

Perhaps more surprisingly, Ben Olsen’s team featured no Wayne Rooney or Luciano Acosta. Acosta took up a spot on the substitutes bench, and Wayne Rooney missed out altogether through an apparent illness. This sparked a change in tactics from Ben Olsen, who started in a 4-4-2. The 4-4-2 has been Olsen’s second most common formation this season (17% of games), behind the 4-2-3-1 (33% of games). However, in three of the four games leading up to this match, Olsen has lined up in a variant of three/five at the back. 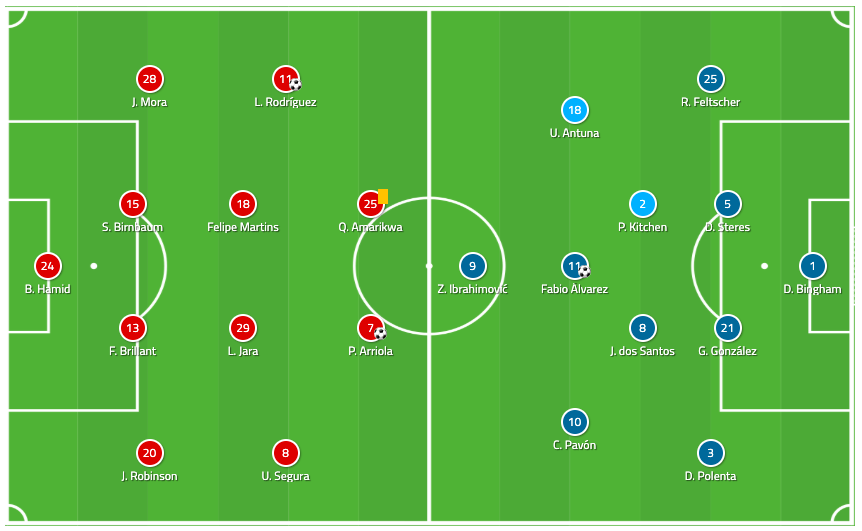 Right from the get-go, DC United lined up in a 4-4-2 when defending. The two blocks of four held their position while the two (Paul Arriola and Quincy Amarikwa) pressed the ball carriers. The setup was very narrow but attempted to meet LA Galaxy’s ball carrier higher up the field.

These defensive tactics required DC’s forwards to press high, especially when LA Galaxy were playing out the back from deep. This high-intensity pressure usually followed a DC possession loss. As soon as DC lost the ball, there was an immediate push to either win the ball back or force LA Galaxy to play long. If the press was unsuccessful, the team would revert back to their 4-4-2. We can see this high press in the passage of play below.

After taking up a more organised defensive shape, the two blocks of four would shift as LA Galaxy switched the play. As this happened, Arriola and Amarikwa provided light pressure to the ball carrier, attempting to force a pass. When a pass was made in front of the midfield block of four, the most pertinent midfielder to the ball stepped to the receiver.

The issue with this defensive setup was the large spaces left between DC United’s defensive lines. This made it easy for LA Galaxy to break the lines and progress the ball. We will discuss this in the next section of this analysis.

Despite being organised, DC United’s defensive lines left them very exposed during LA Galaxy’s possession-based build-up. Direct passes from LA Galaxy’s centre-backs and midfielders could be played into the space between DC’s defensive and midfield blocks of four.

The amount of space meant that LA Galaxy could make this transition from multiple areas of the park. From deep areas, LA would hit their high and wide players to break the lines. In the scenario below we can see, despite having the time and space to progress the ball on the dribble, LA centre-back Giancarlo González looks for the direct ball into Rolf Feltscher. From there, LA have an additional four players ready to receive the ball between DC’s lines.

This scenario shows how, despite being narrow in their setup, there was too much depth between DC United’s two blocks of four. Another common route for LA was down the left side of the field, releasing Diego Polenta or Cristian Pavón down the line. This was possible because, on occasion, DC United’s defensive blocks failed to shift as a team, as we can see in the following images.

In the scenario above, LA Galaxy shift the ball from the right side of the field to full-back Polenta. As he receives the pass, Pavón recognises the space between Frédéric Brillant and Jalen Robinson. Polenta has tons of space to play the ball into the area and releases his teammate into the space. After fooling one defender with a bit of clever footwork, Pavón’s cross was cut out for a corner.

The above scenario shows Polenta, not only splitting the horizontal space between Brilliant and Robinson, but also the vertical space between Robinson and the defender most pertinent to him. These moments where DC United found themselves defensively disorganised led to great opportunities for LA Galaxy to take the lead.

So the big question is, with 70% possession, and vulnerabilities in DC United’s defensive formation, how did LA Galaxy fail to win the game? One of the main reasons is because they wasted their chances. LA managed to take 23 shots throughout the game, only hitting the target four times.

In fact, Swedish striker Zlatan Ibrahimović took 14 shots during the match. This is the highest number of shots ever taken by an individual player during an MLS match, beating the record previously held by Sebastian Giovinco (13) at Toronto FC. Coincidently, Toronto FC broke the record for the most number of shots taken by a team in an MLS game earlier in their season, registering 35 shots against, you guessed it, DC United.

Despite conceding space out wide, DC United made life difficult for LA Galaxy once the ball entered their 18 yard box. Of the 23 shots, nine were blocked by DC United defenders. Many of these blocks were vital in preventing a goal. 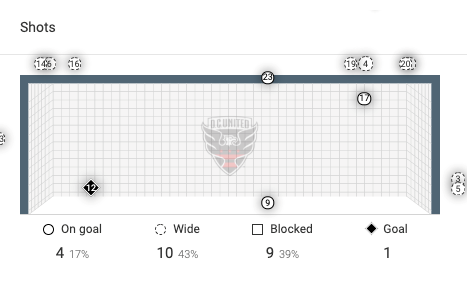 On another day, Zlatan Ibrahimović may, or even should, have scored two or three goals. It’s difficult to analyse why the Swedish striker placed 13 of his shots off target, but it happened either way. The only shot he did have on target forced an absolutely brilliant save from DC United goalkeeper Bill Hamid. The save was so good that, even while tied in the 70th minute, Ibrahimović stopped to applaud Hamid’s heroics.

The other big question surrounding the bizarre outcome of this seemingly one-sided game is how DC United managed to score two goals. With only 30% of the possession, and limited structure in their buildup, both of DC United’s goals came out of the blue.

The two goals were scored directly after DC United goal kicks. After winning the ball from Hamid’s distribution, DC United quickly exploded towards goal similar to how they would on an explosive counter-attack. Because of their focus on attacking, LA Galaxy were caught too far up the field. With LA Galaxy’s defenders out of position, DC United proved more clinical in taking their limited chances.

LA Galaxy will feel frustrated that they let an opportunity to push back into the second-place spot in the Western Conference slip. The game’s statistics don’t point towards a DC United victory, but Ben Olsen’s team managed to win the match, even without Wayne Rooney and Luciano Acosta.

The next few matches will be vital for both teams. A spot in the 2019 MLS Playoffs looks likely for both DC United and LA Galaxy, but the two will want to finish as high as possible in their respective conference to have the best route to their conference finals.