Tottenham Hotspur have enjoyed success in the last few years, most notably playing in the Champions League final last season. A key to that has been none other than Christian Eriksen, their midfield maestro. However, there have been rumours that he will join either of the two Madrid giants this summer. To prepare for his potential departure, Betis’ promising talent Giovanni Lo Celso was brought in on a 16-million-Euro loan. In this scout report, we will use tactical analysis to detail the key attributes of Lo Celso, and how he will fit into Pochettino’s tactics.

Lo Celso graduated from Rosario Central’s youth academy. His talent quickly attracted the attention from Paris Saint-Germain’s scouts. Les Parisiens snatched him up in July 2016. After half a season back to Rosario on loan, and the other half accommodating to life in Paris, he had his breakthrough season in 2017/18, making 33 appearances in Ligue 1. However, he was loaned to Real Betis last season and was bought permanently by the Spanish side this July. Surprisingly, last season’s Champions League finalist Tottenham got him on loan just a month later.

Lo Celso was called up to Argentina’s national team in November 2017. He scored two goals in 19 caps, the most recent of which was in Argentina’s 2-0 win over Venezuela in the 2019 Copa América’s quarter-final.

The above is Lo Celso’s number of matches by position last season. He is a versatile midfielder, but he mainly played as a central midfielder or a central attacking midfielder. He can play as a defensive midfielder due to his work-rate and defensive qualities, while his speed and dribbling allow him to be a quality winger as well.

The above image is Lo Celso’s characteristics, according to Whoscored. He’s a very strong dribbler, he’s good with ball retention, long-range shots and tackling. He has no notable weaknesses.

When it comes to his style of play, he likes dribbling, layoffs, and short passes. He gets fouled often (2.14 per 90).

Below is an example of his layoffs. Lo Celso occupied a small pocket of space between Huesca’s defender and stayed closed to Jesé and Carvalho to facilitate quick combinations. Carvalho passed to Jesé, then quickly made a run to the gap in Huesca’s defence (circled in red). Jesé found Lo Celso, and Lo Celso laid the ball off to the path of Carvalho. This passing sequence occurred within 1.5 seconds, showing the players’ quick passing capabilities. 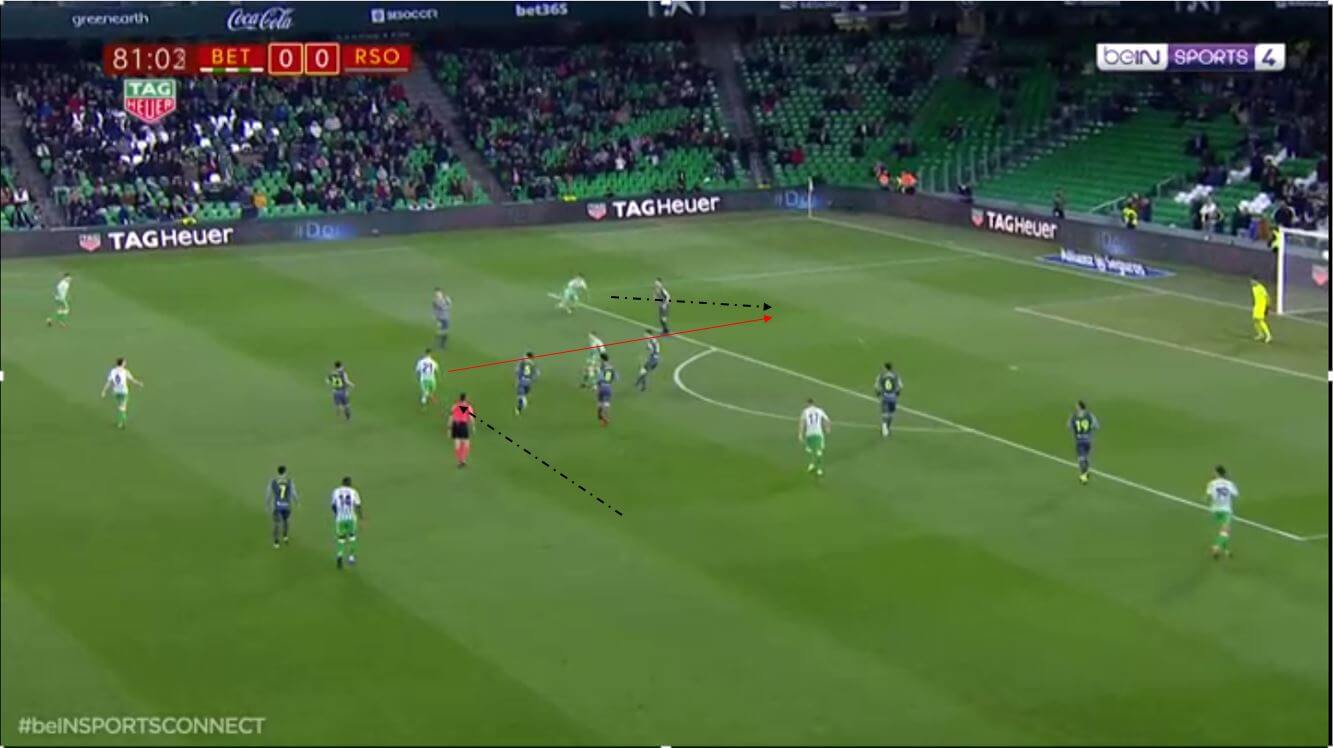 Lo Celso has an uncanny ability to spot gaps and provide quality through balls while dribbling at a high pace. In the example shown above, he dribbled to get away from Real Sociedad’s double pivot. A passing lane then opened, and he picked a quality through ball into his teammate’s path. His dribbling attracted the attention of opposition defenders, opened up space for his teammates and at the same time helped him find the best passing lane.

In the next example, there didn’t seem to be many gaps, but Lo Celso managed to find his teammate with a ground through pass, using the outside of his boot.

In the below example, he was actively closed down by Boca’s midfielder. His body orientation indicated a shot attempt, but he surprised Boca’s defence with a delicate ground through ball. His teammate capitalised on that assist.

Here, he (once again) dribbled across the middle of the pitch at pace, then suddenly found his teammate with a long through ball. Barcelona’s back four was high, and Lo Celso quickly spotted a chance to exploit the large space behind them.

In the next image, Lo Celso used quick turns to dribble round his opponent. He then took a quick look and found his teammate with a long ball over Leganés’ defence.

The last one is a clear example of his smart use of first touch and body orientation. With his back to goal, he opened up his body and received the ball with his right foot (If he received the ball with his left foot, his posture would not be open, and the opponent would have the time to close him down). This open posture enabled him to spot Di María (an open posture also made it much easier for the player to pass or shoot), and he found his teammate with a lob over the defender.

According to FiveThirtyEight.com, “progressive passes and runs identify actions which advance the ball 10 or more yards in attack, or into the 18-yard-box. A successful progressive pass or run doubles the likelihood that the attacking team will score within the next seven seconds, on average”. Lo Celso completed a whopping 3.2 progressive runs per 90.

A player with great progressive runs statistics is expected to be a good dribbler as well. Lo Celso attempted 5.47 dribbles per match, with a success rate of 53.8%. He’s definitely a reliable ball-carrier.

Of all Betis players in La Liga last season, he won the most fouls, scored the most goals (nine), and completed the most dribbles (63). In 2018/19 La Liga, only Ousmane Dembélé (68) completed more dribbles than him, of all players aged 23 and under.

There are countless examples of his dribbling skills, as displayed throughout this article. Below is another.

Here, Eibar’s number six looked to closed down Lo Celso from his blindside, when the Argentine was trying to control a bouncing ball. However, Lo Celso showed his skill and awareness. He flicked the bouncing ball right with his first touch over the head of the opponent and then outran him. He then even made a delicate lobbed through pass, with the ball still bouncing.

His goals per 90 stat is higher than his xG per 90 – meaning he took his chances well. He has a variety of shooting techniques. Take a look at some of his wonderful goals – many of which started with mazy dribbles:

In the below example, Lo Celso suddenly pushed the ball to beat his man.

The goalkeeper rushed forward, but he scored from a tight angle with a chip.

Similar to the example in which he found Di María, his first touch and body orientation gave him the advantage here. When about to receive the pass, his back was against the goal. His control of the pass got the ball right in front of him when he faced the goal. He quickly turned right and then left immediately to get away from the last defender. He scored with a shot into the top corner.

Below is a wonderful lob into the top corner.

Looking at the stats, we can see that Lo Celso is an aggressive player. He averaged 1.6 successful tackles per game (Whoscored stats) and 0.84 sliding tackle per 90 (37.2% successful). The former PSG man committed 1.53 fouls per 90, which is reasonable considering Betis’s aggressive pressing style. His 2.37 interceptions per 90 showed his positioning and the knack for anticipating opponents’ passes. 54% of his 4.86 recoveries per 90 occurred in the opposition half, indicating a tendency to win the ball high up the pitch. This, along with his dribbling and passing abilities can help his side a great deal in launching quick, clinical counter-attacks. He also won more than half of his defensive duels – not bad at all. However, he only won ⅓ of his aerials.

He’s also willing to track back and has the necessary defensive skills to help his team. Here, he ran back fast and stopped Real Madrid’s counter-attack with a sliding tackle from behind.

He lost the ball 10.65 times, which is quite a lot. However, as an attacking player, he is expected to attempt a high number of dribbles and difficult passes. Moreover, only 24.7% of his ball losses occur in his own half.

What will he add to Pochettino’s side?

As Tottenham Hotspur’s and Real Betis’ systems bear great similarities, Lo Celso can easily adapt to the English side’s tactics. With an excess of midfielders and a lack of real strikers, Spurs are expected to mostly use the 4-2-3-1 formation this season. Lo Celso can play as part of the double pivot, or in the number 10 position, which was mainly occupied by Dele Alli in the last campaign.

With great football IQ and spatial awareness, Lo Celso will easily occupy pockets of space between the opponents’ midfield and defence. He has an ability to execute layoffs and one-twos, and thus will easily combine with his nearby teammates to progress through tight spaces. He can also be the one to find other needle players with line-breaking passes. His dribbling will disrupt the opposition system and open up spaces for the likes of Son and Alli to exploit. In addition, his high work rate and willingness to defend will definitely suit Spurs’ aggressive pressing style. However, he will have to work hard if he wants to earn a usual starting spot. Spurs have already had top-class midfielders in the likes of Ndombele and Eriksen.

This analysis has demonstrated Lo Celso’s all-round qualities. He has all the necessary tools to become a vital cog in Pochettino’s system. Young and determined, the sky is the limit for him. It will be interesting to see whether he can become one of the world’s top 10 midfielders. Only time will tell.