Might be a surprising result in the MLS encounter between Chicago Fire FC and DC United, especially since the two sides played a 3-3 draw earlier this season. However, keep in mind that both teams have a low scoring goals ratio (1.5 and 1.3 goals per match) and more importantly, they ended with a goalless draw last time Chicago Fire FC hosted DC United.

Chicago Fire FC made it difficult for DC United to access the middle area and they managed to keep the guests far from their goal, which reduced the threat that Rooney’s side could pose. Chicago Fire FC also had a low 0.72 expected goal though. Despite the 0-0 result at this MLS clash, there were interesting tactics and details on both sides that this tactical analysis going to reveal.

This analysis will focus on following crucial elements of this battle: 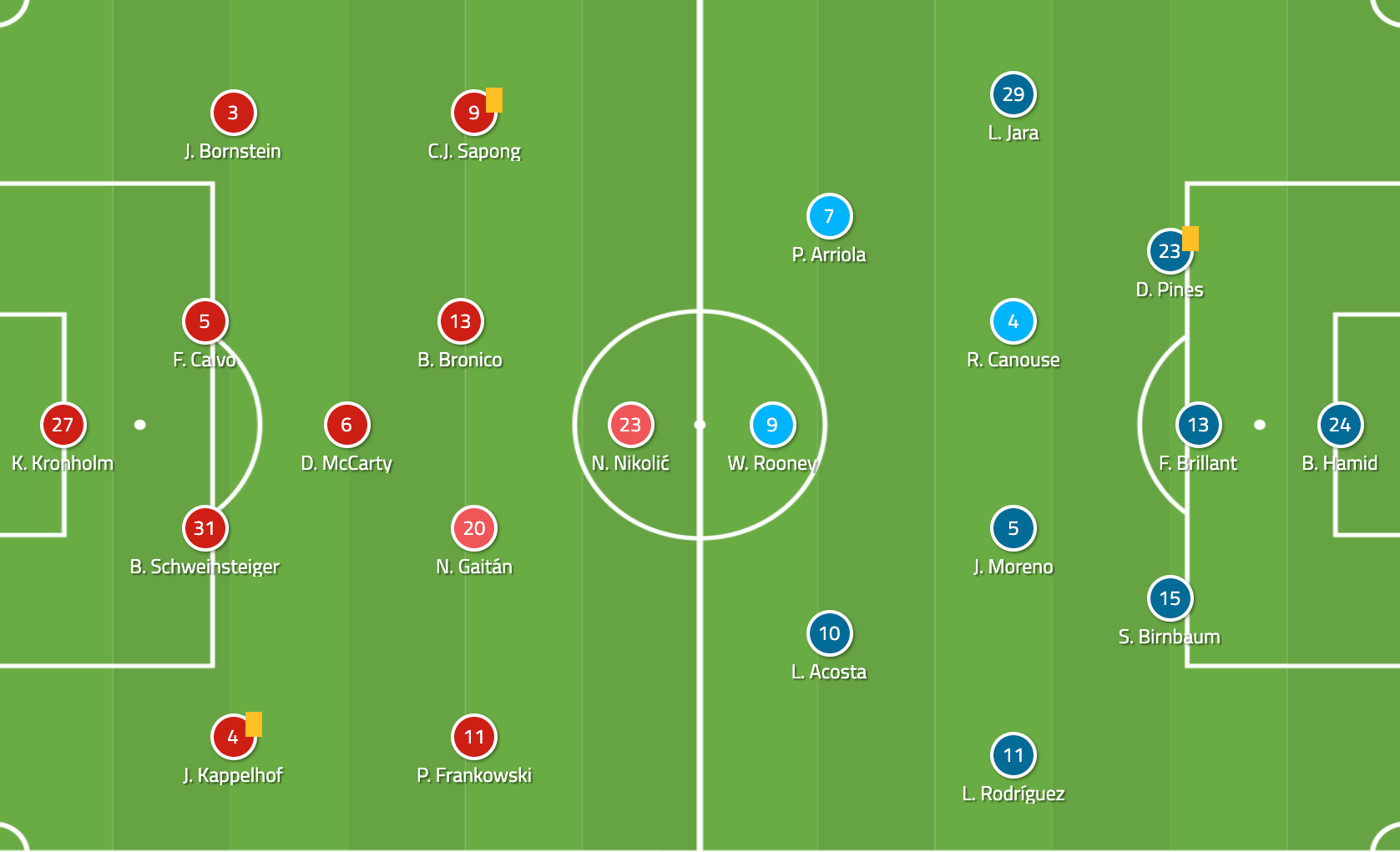 Veljko Paunović tends to adjust the formation to the current opponent. Now, he deployed a 4-2-3-1 shape which was more likely a 4-1-4-1 as Brandt Bronico occupied higher than Dax McCarty. McCarty returned to the team after missing the last game against Philadelphia Union. Same with Nicolás Gaitán. Moreover, C. J. Sapong moved to the left-wing, thus Przemysław Frankowski could stay on the right and Nemanja Nikolić the lone centre-forward.

Meanwhile, DC United used a 3-4-3 structure, Ben Olsen chose almost the same team than he did against Atlanta United. Donovan Pines, Steve Birnbaum, Frédéric Brillant at the back. Leonardo Jara moved to the right wing-back position while Júnior Moreno returned to form the midfield with Russell Canouse. On the left-wing, neither Stieber nor Mora was chosen, rather Lucas Rodríguez moved out. Lastly, at the top the trident of Luciano Acosta, Paul Arriola and Wayne Rooney.

Despite the home ground, Fire quickly revealed their basic manner for this game as they approached it a bit defensively. DC United had a slightly higher possession rate (53%), although they have a bit of a low rate overall (49%) in this season. Paunović’s tactics were to create mid-block to negate the opponent’s progression. While with the ball, they aimed to attack quickly through the quick wingers, cross the ball to the penalty box to create a chance for Nikolić or the far sided winger.

Furthermore, Chicago Fire formed a medium to a high block where Bronico occupied next to Gaitán while McCarty stayed deeper as a lone holding midfielder. Thus in order to match the opposition midfield, they formed a 4-1-4-1 shape. It was important since Paunović use man-orientation in pressing, for example, Bronico marked Canouse and Gaitán covered Moreno. Whilst Sapong and Frankonwski followed the wing-backs (Jara and Rodriguez).

However, Fire did not press aggressively, rather maintained the block to prevent the progression. For example, upfront, Nikolić displayed the usual high work rate and focused on blocking the passing lanes. With this scheme, they would able to block the opponent off central zones.

Meanwhile, DC United staggered into the usual 3-4-3 structure in the build-up, although it was more likely a 3-2-2-3 shape due to the wing-backs higher occupation. In addition to that, it was a bit asymmetric since Rodríguez positioned a bit deeper than Jara on the other wing. 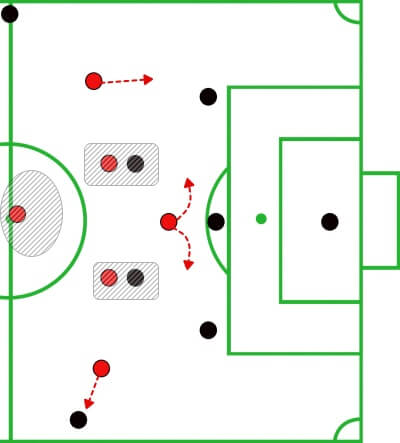 The back three was positioned adequately to create stable pass connection in between them, although Fire did not intend to disrupt it. As opposed to the midfield, where the home side used man-marking (by Bronico and Gaitán) against Moreno and Canouse who stayed deep to both offer a passing option.

Moreover, the wing-backs also closed down by the Fire’s wingers. Therefore, United struggled to create a reliable method to progress through the thirds to the opposition box. They were restricted to the lateral zones where they also met some issues.

Although Fire had less time on the ball, they managed to gain control on the game without it. Despite the fact they did not press actively, they had specific triggers to start putting pressure on the opponents. For example, Sapong was tasked to press out aggressively when Pines received a switch of play and tried to drive forward on the ball. He instantly closed down by Sapong.

Sapong moved out diagonally and pressed with a curved run. He pressed from outside to inside thus forcing the ball back, while the teammates block the passing options centrally (Bronico followed Canouse in this situation).

With the shifting, they would control and prevent the opponent’s build-up, however, there were issues in there. In this instance below, Nikolić forced the ball wide with his diagonal pressing run. Then Sapong closed down Pines again with the same movement he did earlier. Of course, it leaves the central open that Bronico would cover, but this time he did not follow Canouse rather shifted there to protect the space behind Sapong. Therefore, Sapong press was ineffective since Pines found pass option, namely Canouse who pass forward to Jara who dropped. It would be an impressive way to beat the opponent’s press if Jara passed precisely to Arriola. 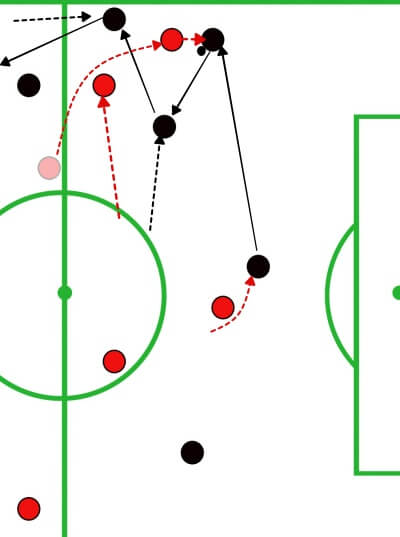 Thus Chicago made a good job with preventing the opposition progression but there were clearly occasions when United could beat it and reach to the final third. As opposed to Philadelphia Union, DC United were not able to exploit Fire’s man-orientation and create space for progression.

In this section, there will be possible solutions for both sides’ errors. First of all, starting with Chicago’s above-mentioned problem. Sapong clearly tasked with this pressing movement (blocking the wide angle and force back the centre-back) but in that situation above, it was a much better choice to press diagonally with blocking the central option and trapping Pines next to the touchline.

Obviously, it would leave the dropping wing-back open but Bronico could easily put pressure on him which could stop the opponent progression, and force them back.

Now, look into DC United’s set up at the build-up phase, it was clear that both midfielders (Canouse and Moreno) positioned deeper than they should. It is a natural and common scene that in a three at the back formation, the centre-backs would drive forward on the ball towards the half-spaces. With the higher positioning of the midfielders, it would give more space for Birnbaum and Pines to dribble forward with the ball, and it would create a decision-making crisis. 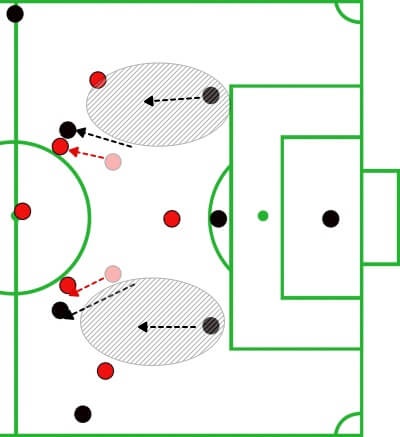 For example, Frankowski would have to choose between marking Rodríguez or closing down Birnbaum. Especially since Frankowski tended to drop to maintain close proximity to Rodríguez. 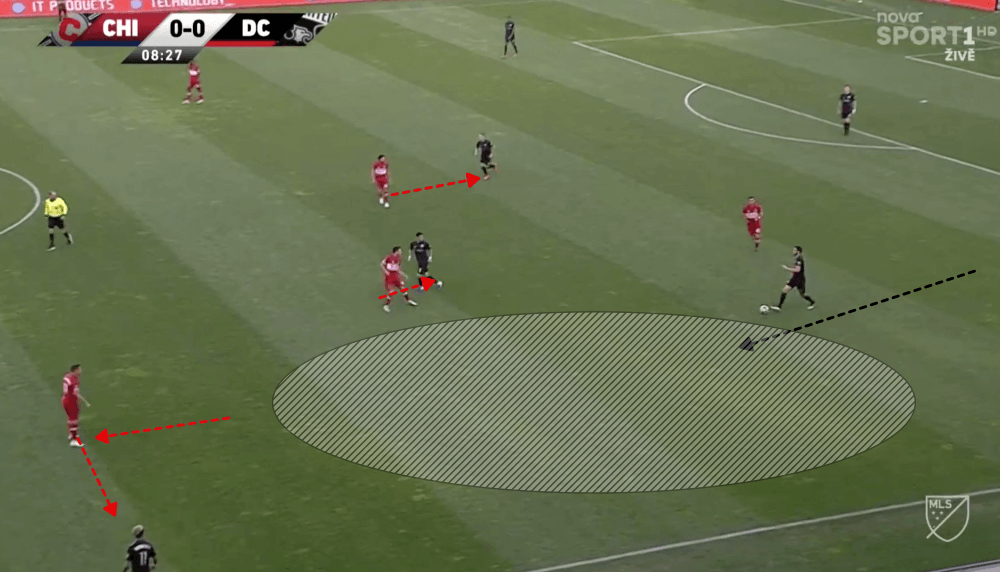 The result was not ideal for both sides, although no the worst too. As DC United had only won in their previous five games (two draws and two losses) thus really needed three points if they wanted to preserve their top three position in the MLS Eastern Conference. Atlanta United already took the second place and NYCFC closing on DC United, only one point advantage remained for Ben Olsen’s side.

Whilst Chicago Fire FC are also in need of winning since they suffered three losses in their previous five games thus they dropped down to the 11th position in the Eastern Conference and only Cincinnati FC are below them. Veljko Paunović’s team need to improve for the second half of the season.